The catalogue for Hippie Modernism: The Struggle for Utopia is edited by curator Andrew Blauvelt and contains new scholarship that examines the art, architecture, and design of the counterculture of the 1960s and early 1970s. The catalogue surveys the radical experiments that challenged societal norms while proposing new kinds of technological, ecological and political utopia. It includes the counter-design proposals of Victor Papanek and the anti-design polemics of Global Tools; the radical architectural visions of Archigram, Superstudio, Haus-Rucker-Co, and ONYX; the installations of Ken Isaacs, Joan Hills, Mark Boyle, Hélio Oiticica, and Neville D'Almeida; the experimental films of Jordan Belson, Bruce Conner, and John Whitney; posters and prints by Emory Douglas, Corita Kent, and Victor Moscoso; documentation of performances by the Diggers and the Cockettes; publications such as Oz and The Whole Earth Catalog; books by Marshall McLuhan and Buckminster Fuller; and much more.

While the turbulent social history of the 1960s is well known, its cultural production remains comparatively under-examined. In this substantial volume, scholars explore a range of practices such as radical architectural and anti-design movements emerging in Europe and North America; the print revolution in the graphic design of books, posters and magazines; and new forms of cultural practice that merged street theater and radical politics. Through a profusion of illustrations, interviews with figures including: Gerd Stern of USCO; Ken Isaacs; Gunther Zamp Kelp of Haus-Rucker-Co; Ron Williams and Woody Rainey of ONYX; Franco Raggi of Global Tools; Tony Martin; Drop City; as well as new scholarly writings, this book explores the conjunction of the countercultural ethos and the modernist desire to fuse art and life. 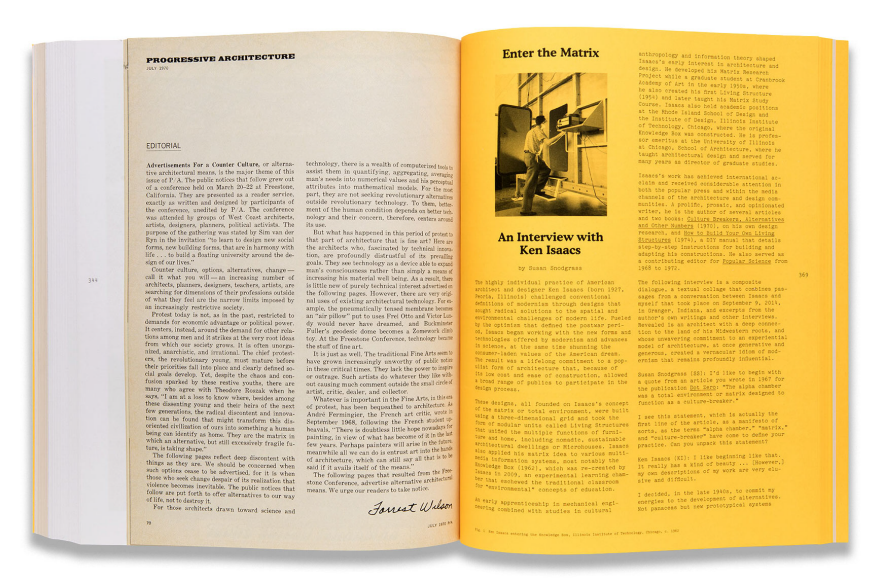 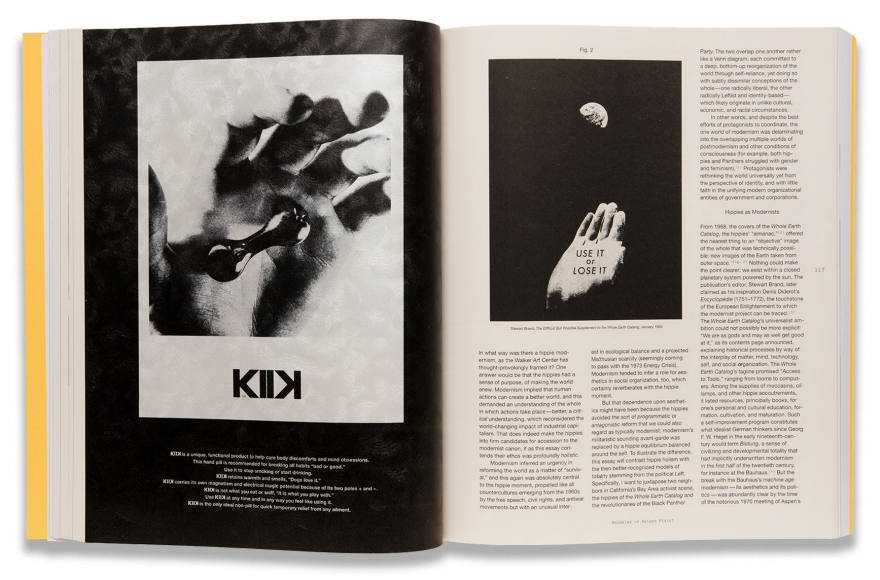 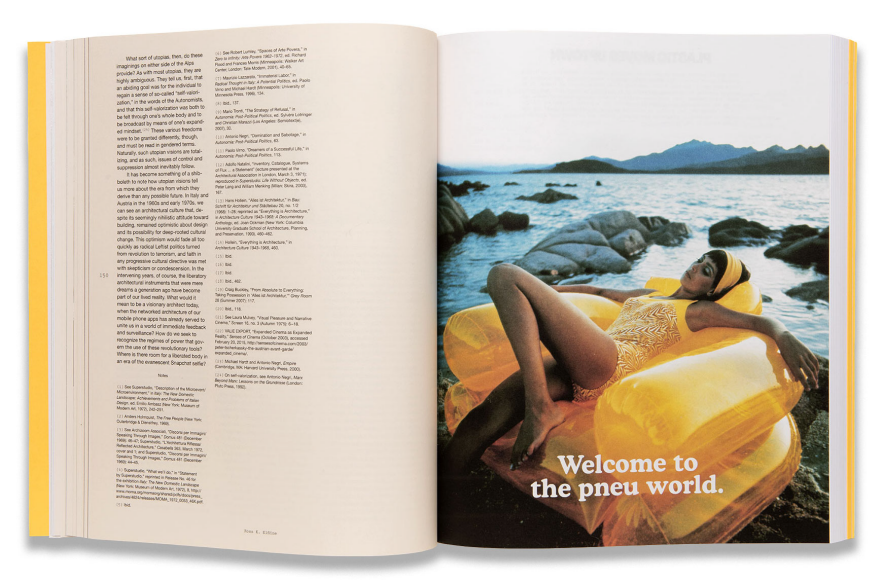 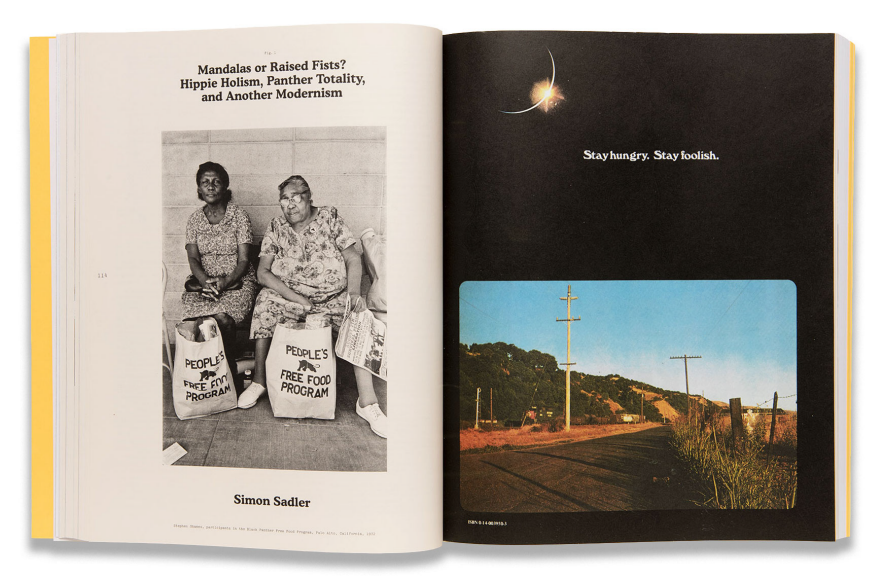 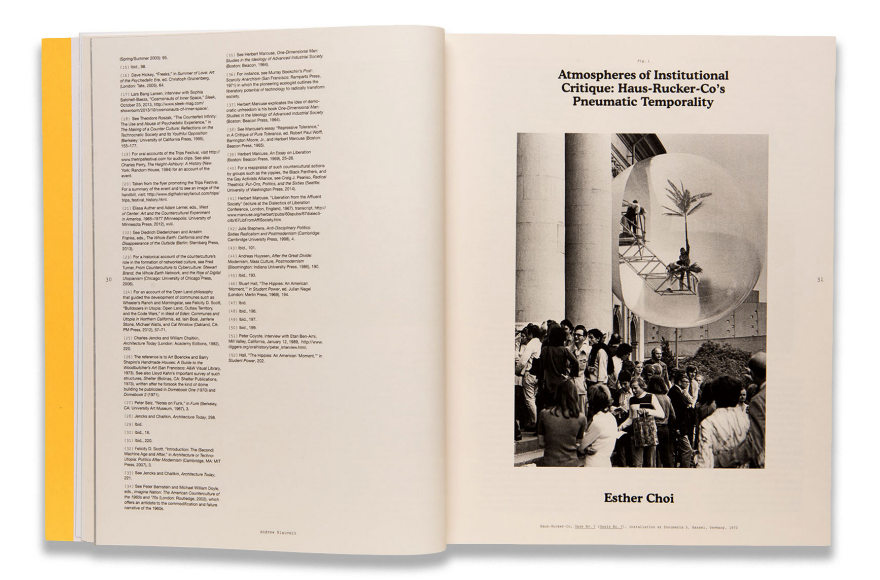 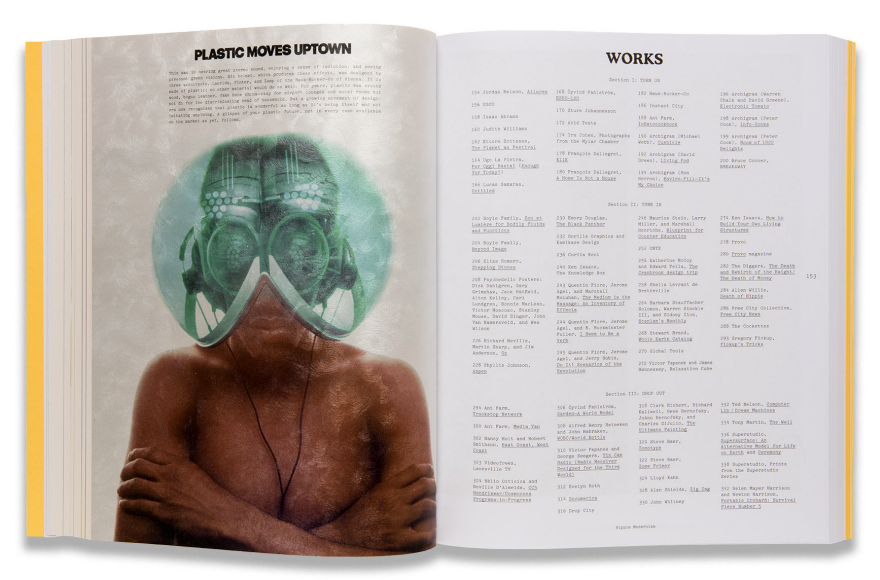 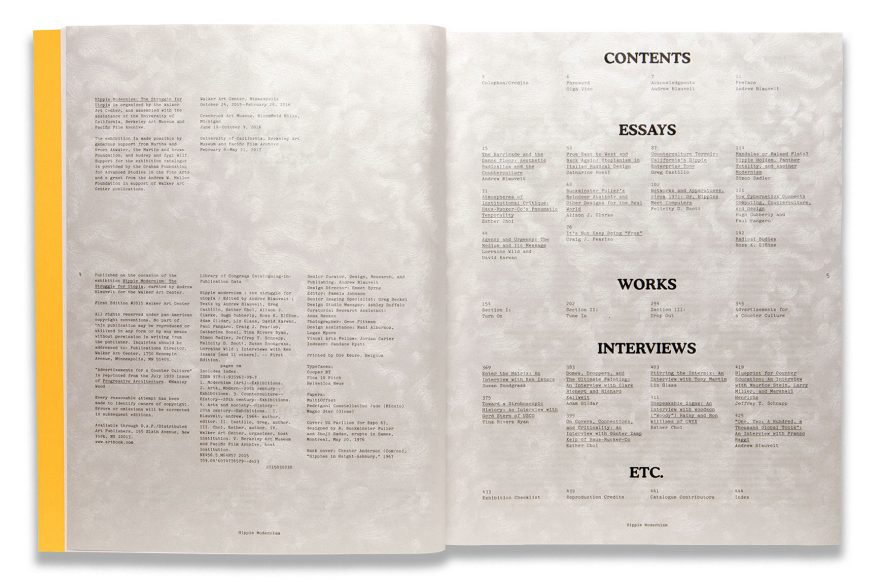 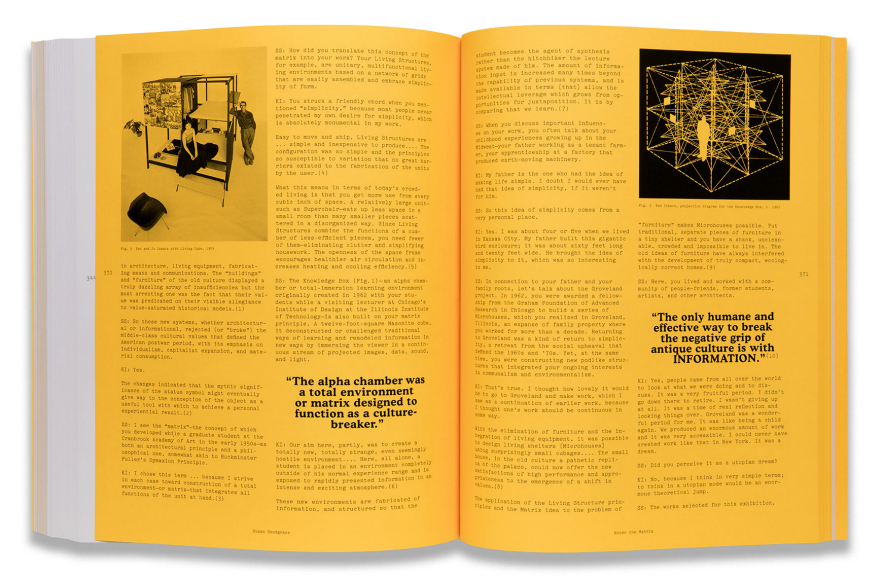 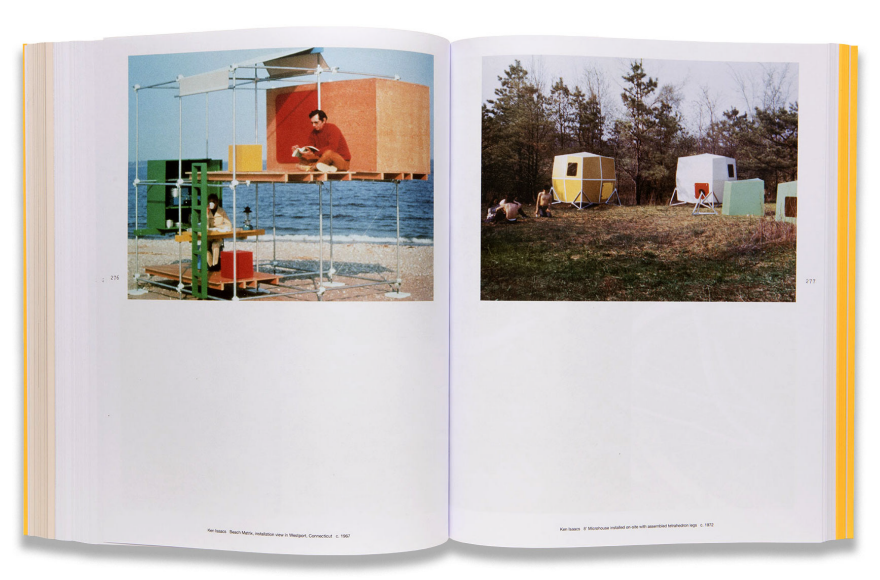 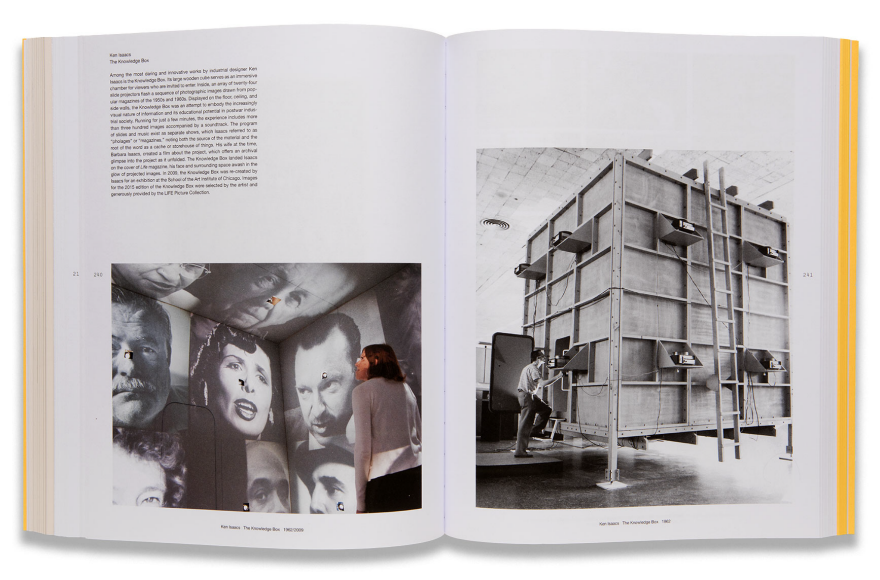 While designing the publication, one of the tensions we were interested in exploring was the relationship of the hippie as popularized by the media and its authentic counterpart, if such a thing existed. As Andrew describes in his preface to the catalogue, "The hippie was and remains a highly mediated figure, one used rhetorically within this project as the same kind of empty signifier to which accreted many different agendas. Or, as the Diggers once said, the hippie was just another convenient "bag" for the "identity-hungry to climb in." If the publication could illustrate both the hippie as utopic countercultural agent and the hippie as "devoted son of Mass Media," we might begin to emulate a Hippie Modernism.

Typographically, we responded to lo-fi publications such as the Whole Earth Catalog, How to Build Your Own Living Structures, Be Here Now, and theFoundation Journal on one hand, and the iconic, corporate advertising language of the '60s and '70s on the other. Bridging these two registers came quite naturally to many of the artists and designers of this era, who understood that envisioning a utopia meant performing it, broadcasting it, projecting it, publishing it, and advertising it. Creating the future meant co-opting the strategies of mass communication.

One obvious example of this was "Advertisements for the Counter Culture," an insert in the July 1970 issue of Progressive Architecture magazine, in which representatives of the counterculture were invited to create advertisements for their various projects and efforts. In the preface, editor Forest Wilson wrote, "The following pages reflect deep discontent with things as they are. We should be concerned when such options cease to be advertised, for it is when those who seek change despair of its realization that violence becomes inevitable. The public notices that follow are put forth to offer alternatives to our way of life, not to destroy it."

In addition to reprinting the insert in our catalogue, we created a 16-page reimagining of it through the lens of Hippie Modernism, interspersed throughout the essay section. Some of these pages feature real ads, publication covers, and layouts from the period, while others are fictional recreations (the McLuhan ad, for example, required restaging a photoshoot in order to translate an ad that was originally black-and-white into full color). The pages are printed on Constellation Jade Riccio, a dreamy, pearlescent paper embossed with a wavy pattern that brings to mind the organic psychedelia of certain hippie projects such as Elias Romero's oil and ink light show experiments, while also reinforcing notions of mass production and surface, by way of it's highly artificial nature. (I first saw this paper used beautifully by Laurent Fétis and Sarah Martinon in the design of the catalogue for the 23rd International Poster and Graphic Design Festival of Chaumont 2012.)

The book also includes an extensive plate section, featuring images and descriptions of the projects featured in the exhibition. Finally, the image on the cover of the book depicts the US Pavilion for Expo 67 (Montreal), designed by Buckminster Fuller and Shoji Sadao, as it caught fire on May 20, 1976. As a signifer, the photo by Doug Lehman seems to perfectly encapsulate the friction implied by the term "hippie modernism" and, more explicitly, the counterculture's utopian agenda being subsumed—and deemed a failure—by the conservative era that was to follow. With each passing year, though, this reactionary characterization of the counterculture moment rings more and more hollow, as contemporary practitioners revisit the revolutionary strategies these artists, designers, and activists deployed.

Everything was considered. Exceptional execution. Consistency across all elements. Very relevant but unexpected.