The Walker Art Center design studio was asked to create a catalogue for the exhibition International Pop.The book is the first major survey to chronicle the emergence and migration of Pop art from an international perspective, focusing on the period from the 1950s through the early 1970s. Including original texts from a diverse roster of contributors, this catalogue provides important new scholarship on the period, examining production by artists across the globe who were simultaneously confronting radical cultural and political developments that would lay the foundation for the emergence of an art form embracing figuration, media strategies and mechanical processes with a new spirit of urgency and/or exuberance. International Popamplifies the scope and tenor of what we understand to be "Pop," exposing the tremendous variety and complexity of this pivotal period and subject matter, and revealing how artists alternatively celebrated, cannibalized, rejected or assimilated some of the presumed qualities of Pop advanced in the US and Britain. 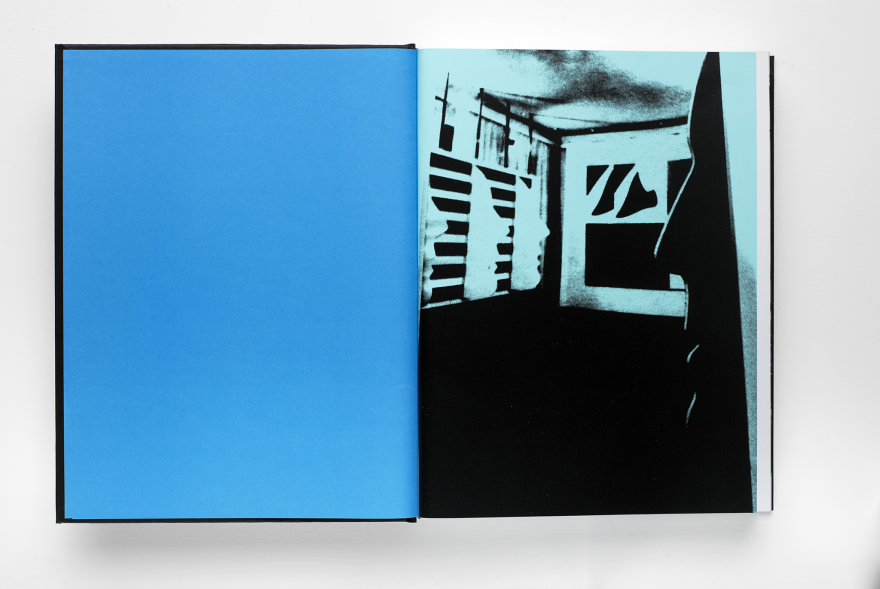 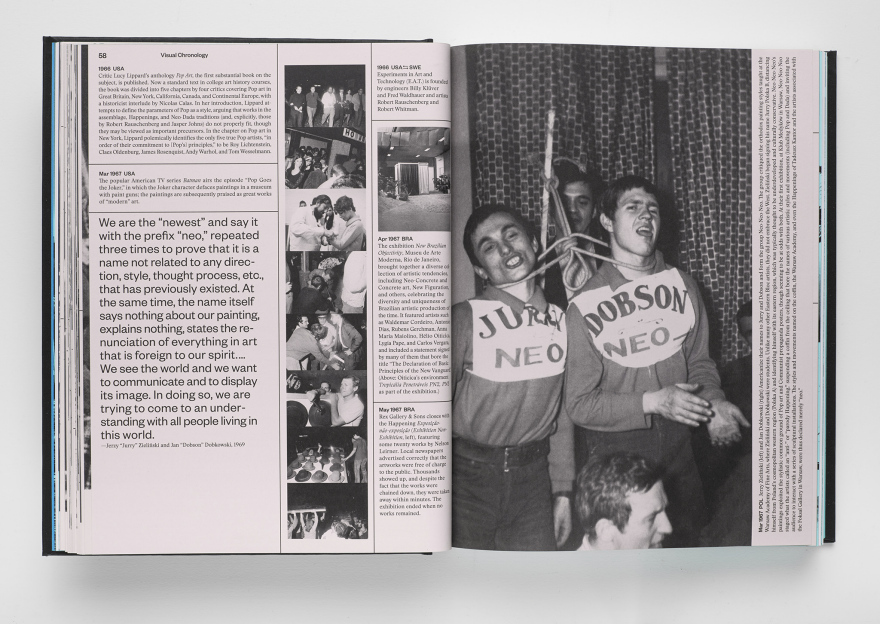 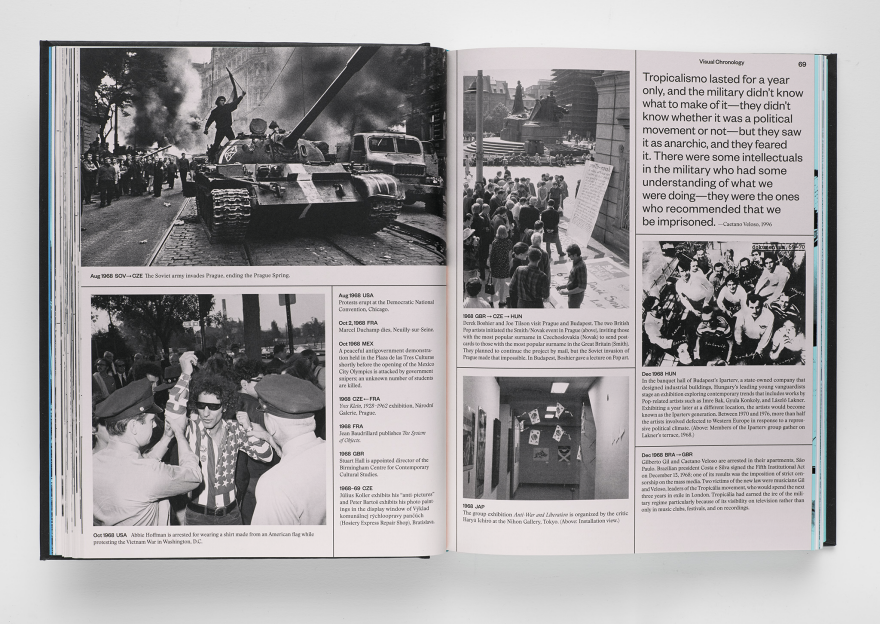 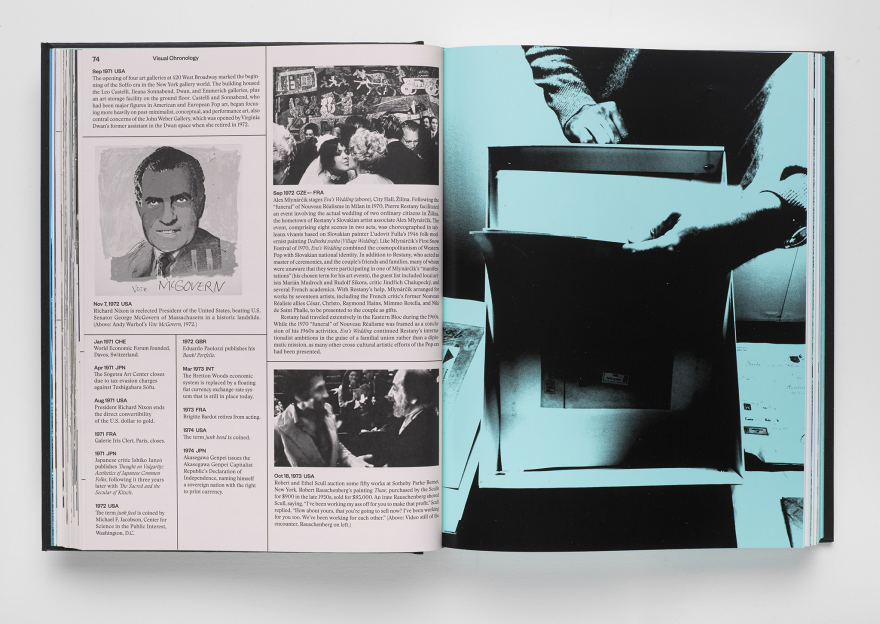 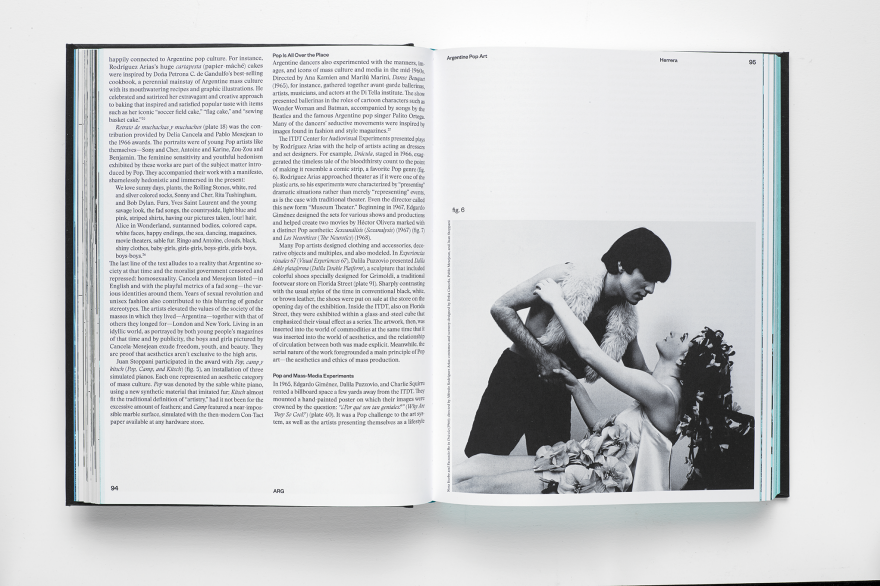 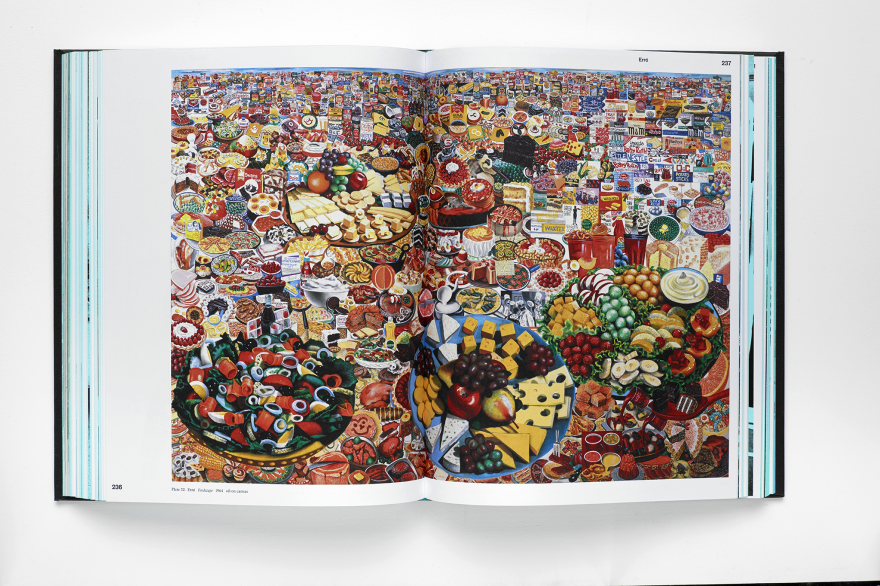 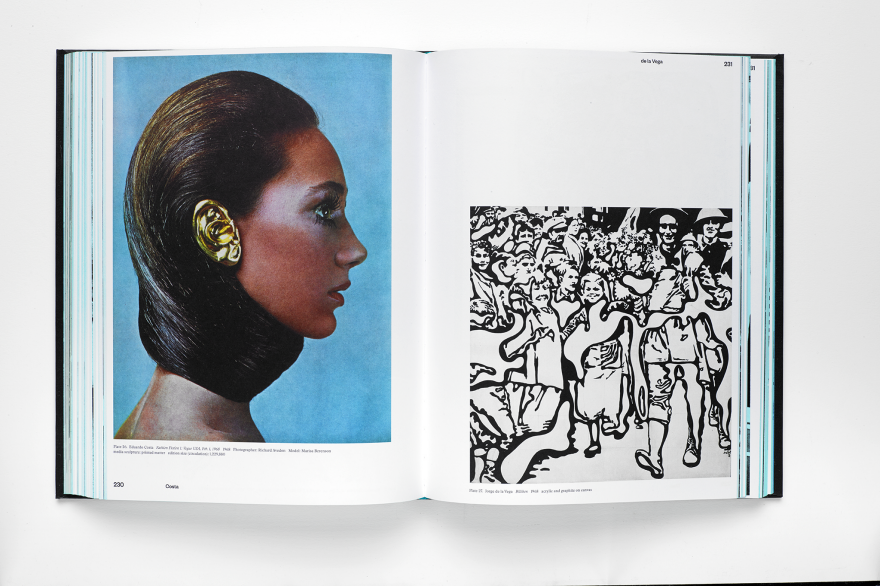 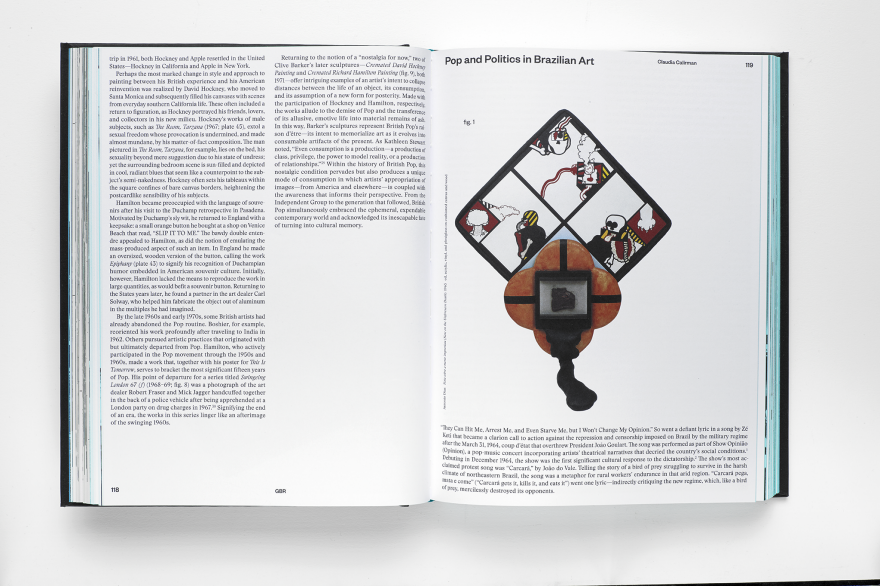 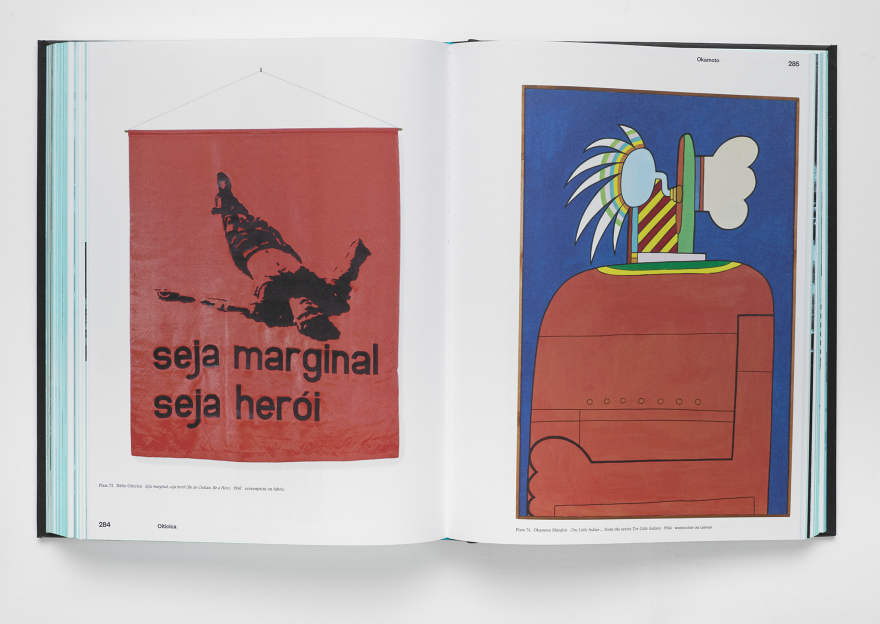 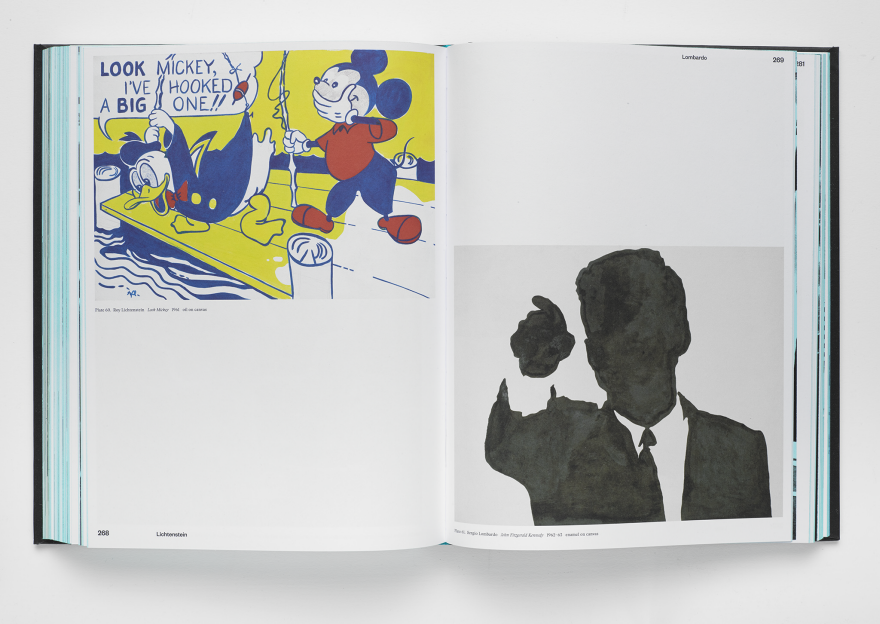 I'd like to start at the very beginning of the book design process. When you first hear about the concept for an exhibition what sort of research do you do? How do you relate the aesthetic vocabulary of an artist, group or movement to the design of a book?

The research I conduct at the start of a project is tailored to the subject in question. For previous publications, I spent time with living artists, researching the subject in person. In this case, after I learned that I would be designing the catalog and identity for International Pop, I began frequenting the Walker's library, reviewing our considerable collection of Pop-era ephemera, artist books, and catalogs. Then throughout the book design process, I adjusted my research strategy depending on what was needed, what was missing from the project, and what I needed to learn. The translation of artistic vocabulary into a book is context-specific, and ranges from a slight nod to a more literal reference. Pop has so many visual signifiers that it would be difficult to avoid calling them out in this book, even in subtle ways, like the choice of typeface or the style of the contents page.

As an object, International Pop is incredibly striking. What was your guiding principle behind the design of the package?

There is so much about the production of the book that I love—especially the puffy cover. How is this made?

The puffy cover was something I advocated for because I thought that it added to the unexpected but luxe feel of the book, and I associate Pop—rightly or wrongly—with a kind of soft friendliness. The book board is padded before it is wrapped with the book cloth to achieve the puffy effect.

Where did the concept for the cover graphics come from?

In the initial stages of the project, I reviewed and researched the exhibition checklist as it stood at the time and noticed a number of artworks intended for the show featured either mouths (as in László Lakner's Mouth), eyes (Joe Tilson's Look), or ears (Eduardo Costa's Fashion Fiction 1). My understanding is that the isolation and detailing of body parts is one of Pop's many artistic legacies. Because of that, I began sketching the cover as a rebus, featuring artworks in the place of lips, eyes or ears. I came up with introductory text to render on the cover, interrupted by the artworks defining the rebus: "International Pop ecc(lips)ed us in its neon red l(eye)t, but afterward, the ear(th) app(ear)ed. That strategy went over well, but we ultimately did not want to feature specific artworks on the cover, so I abstracted it, illustrating the rebus elements instead. Later on, I shortened and abstracted the title "International Pop" in response to how the curators and editors were using the shorthand "I-Pop," to refer to the show. The eye, a prominent reference point in Pop and the thinking around the show's touchstones—geopolitical unrest, increased media coverage and consumption, and cultural self-reflection—seemed like a perfect stand-in for the "I" in "I-Pop." Apart from the graphics on the cover, I had created a suite of passport stamps to serve as the International Pop brand. In each version, "International Pop" was translated into the languages of the artists that were heavily featured in the show and the essays, which detailed Pop movements from around the world, from Brazil to Japan.

When I first saw the book my personal association with the teal printed edges was with the color of a popular brand of photo emulsion for screenprinting, which seems so perfectly suited for a book about Pop. What informed your color decisions?

Although the screen printing reference would have been a clever one, the color scheme was a happy coincidence. Initially, I sketched the cover and other elements of the book with primary colors on a white background, much like Lichtenstein's Look Mickey featured in the show. But I needed to move away from that knee-jerk reaction, which made more sense for the Walker's International Pop campaign than it did the catalog. Curators Alexander and Ryan set out to redefine and broaden the scope of what most people think of as Pop with this exhibition, and that included color. So in the spirit of experimentation, I opened a few sketches in Photoshop and inverted them. The white background became black and the primary colors were altered; I continued working with the same palette going forward, including the fore edge stamping, which is meant to match the turquoise graphics on the cover, as well as the pages I call "interruptions:" snapshots taken by the curators over the course of their their travels and research for the exhibition and catalog that are dispersed throughout the book.

The catalog starts with a detailed visual chronology, which charts key events surrounding Pop internationally – both political, economic and explicitly art-related. Instead of making this an appendix, this section grounds the rest of the book. Can you talk about the thinking behind the design of this section?

Curators Alexander and Ryan had already planned for an extensive visual chronology by the time I started the catalogue. They worked with local art historian Godfre Leung, who had the massive task of identifying, organizing and writing about the relevant and tangential events, movements, and watershed moments that contributed to the evolution of Pop. I took some of the early drafts from Leung and presented two very different approaches to the section. The version that made it into the book is formally based on scaffolding, which had the effect of compartmentalizing each entry. It was important to control the chaos of the hundreds of dates, texts and images in the chronology with a strict system to ensure the reader could make sense of it all. The curators, contributors, and I collaborated on which entries were illustrated and which photos were selected. As most of the archival images we found were black and white, I decided to make this section one-color to contrast with the four-color work featured throughout the rest of the book. In addition, to me, the artists' voice was as important as the photographs. I treated the pull-quotes similarly to the images, in that they stood out on the page. They are displayed larger, in a different typeface from the entries (Founders Grotesk), and were given their own "compartment" on each spread, which allows the reader to engage with this section from either the cursory level of quotes and images, or the deeper level of entries and captions. And because international travel was a relatively new and exciting reality at the time, I called out each event by noting its international country code(s), at times listing two or more countries depending on the item, and noting artists' movements, international agreements and the like with arrows. Finally, even though the chronology is the entry point to the rest of the catalog, it is intentionally stylistically separate, and is printed on salmon-colored paper a la Financial Times.

International Pop does a great job of presenting the work from the Walker exhibition but also can stand alone as resource about Pop art. How do you address the challenge of making a book a platform for the material and not a walkthrough of the show?

Unlike digital media and design for the web, print has a built-in finality that puts the book in a unique position to be an authority figure, the "final word" on a given topic. Depending on the curator or editor's motivations for a publication, I can either highlight that sense of authority or I can underplay it. In the case of International Pop, the subject matter was so extensive that there was never a thought that this catalogue would merely document the show. In fact, there were a number of plates that we included in the book that, for a myriad of reasons, did not make it into the show.