For their new tech hub in San Francisco, Bloomberg wanted to create a space that embodied their status as an established and innovative technology company. No ping-pong tables, silkscreened inspirational posters, or playroom-inspired spaces. Bloomberg is not a startup, but a mature leader in the technology space.

Situated in the art deco 140 New Montgomery building, Iwamoto Scott's space design honors its history yet is also modern and sophisticated. Volume extended its narrative through a visual identity of wayfinding and environmental graphics. 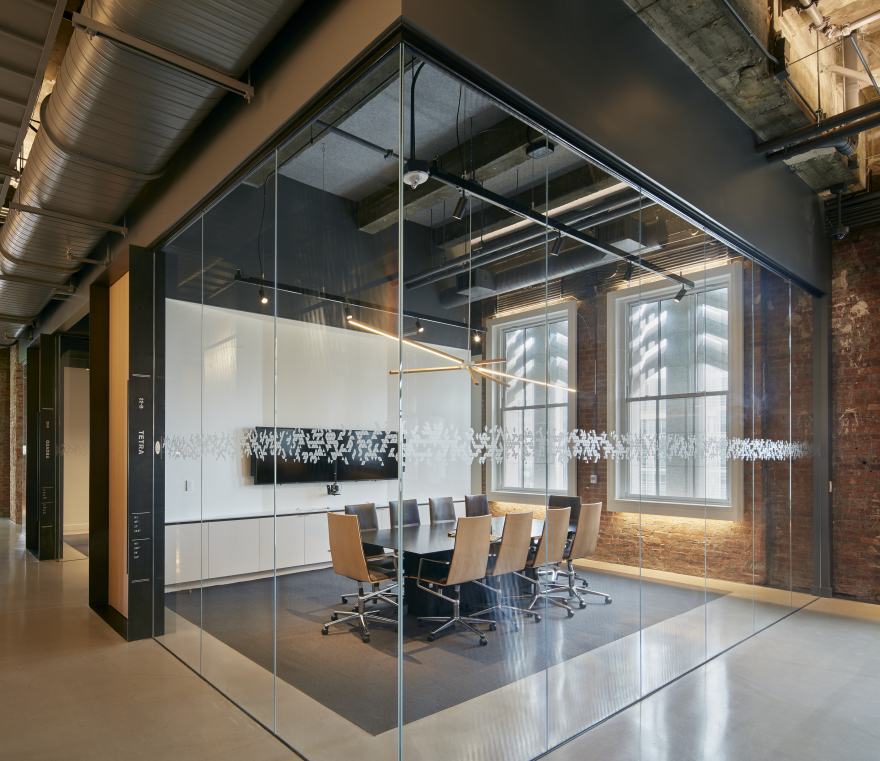 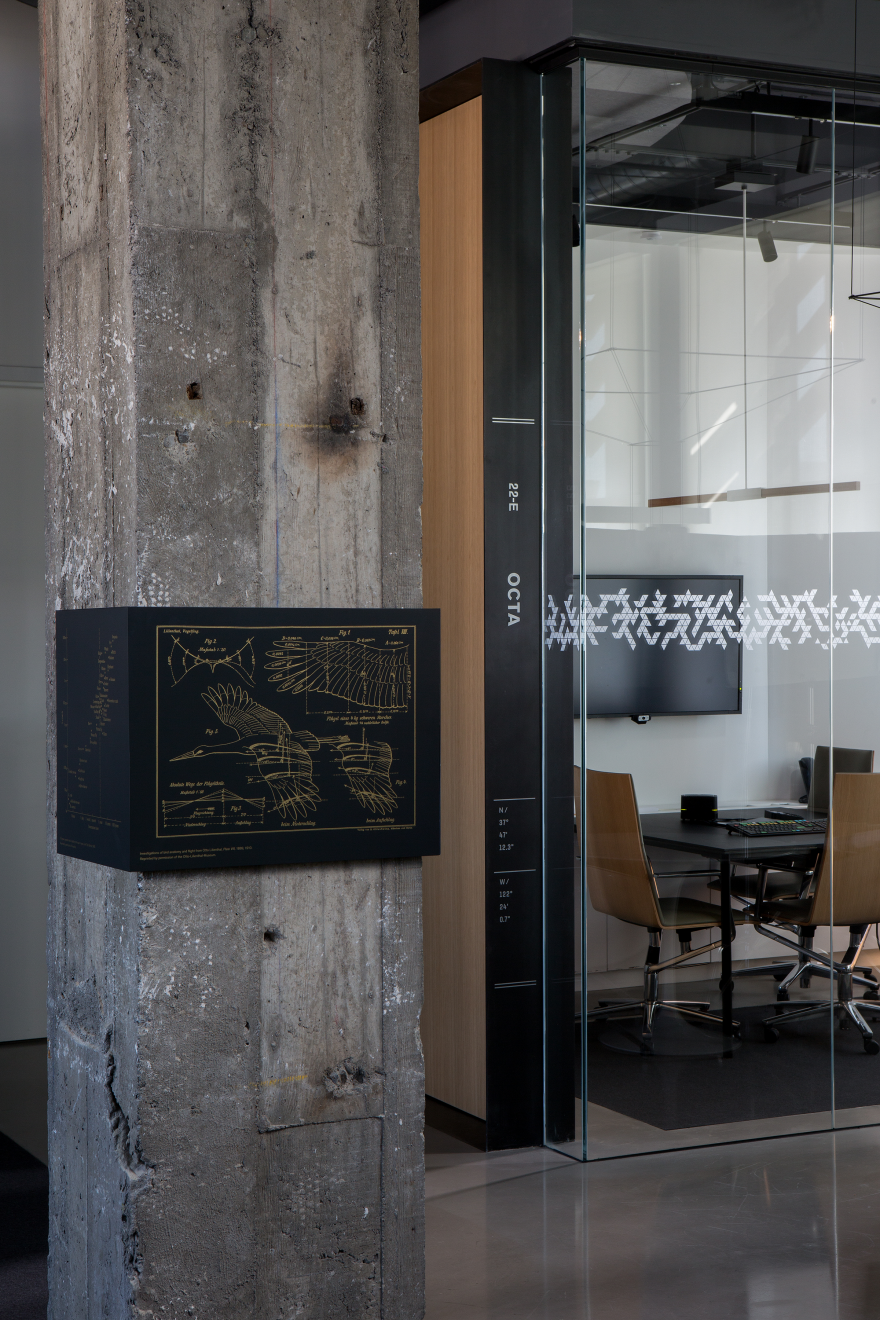 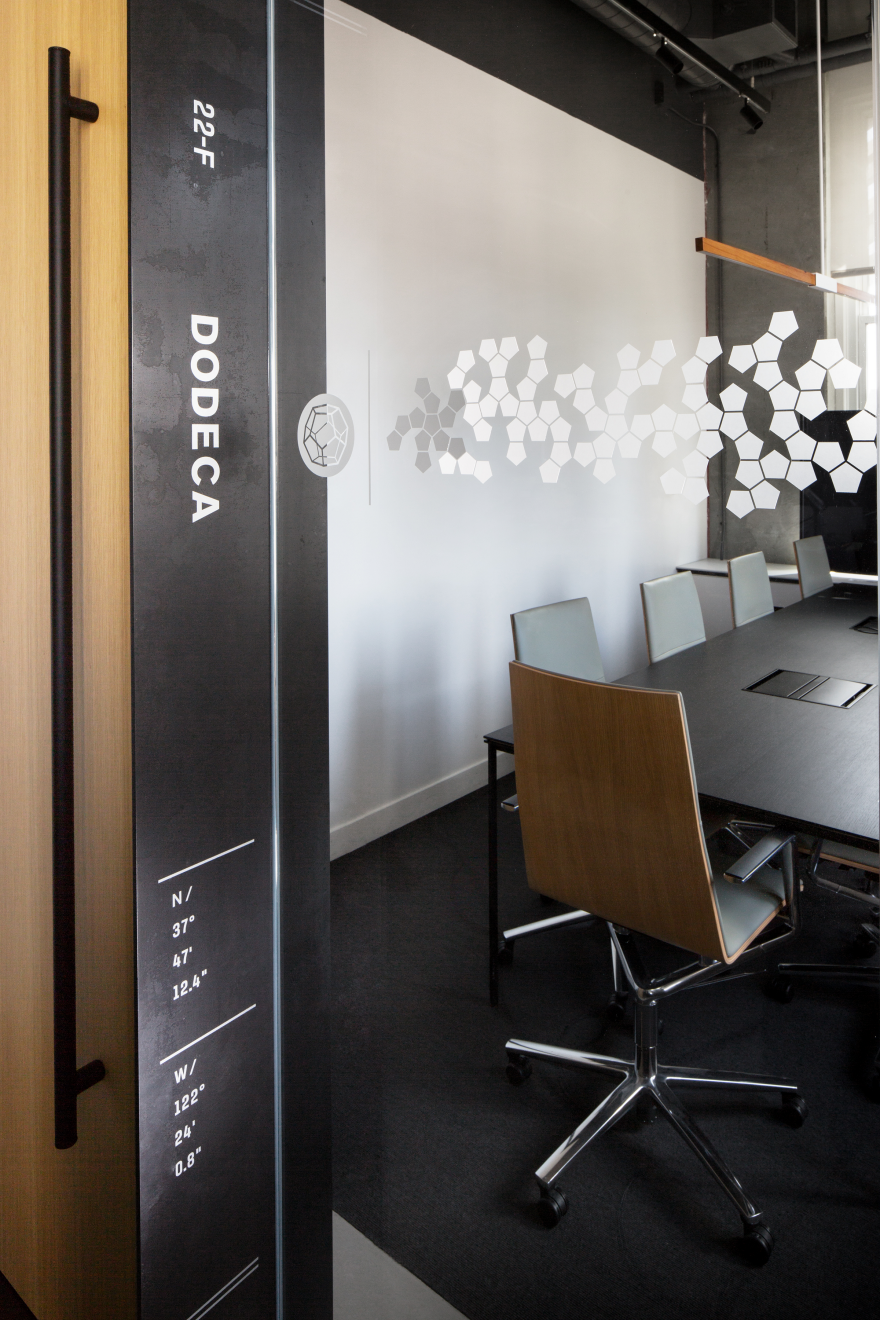 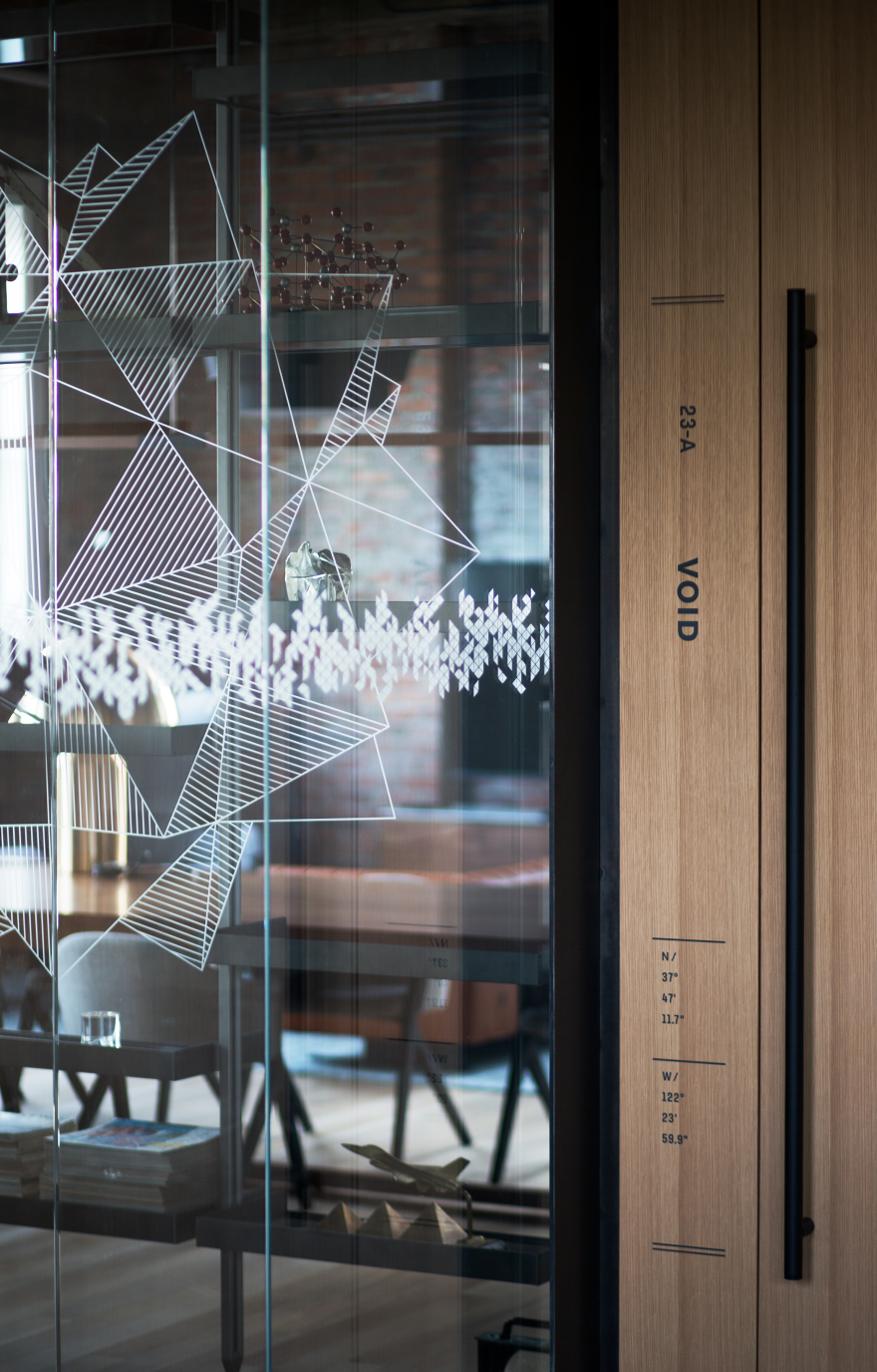 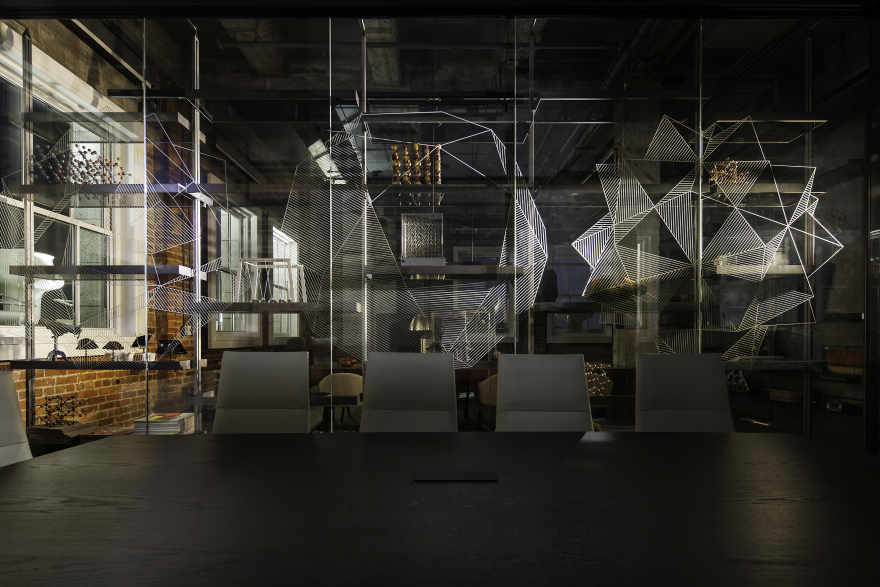 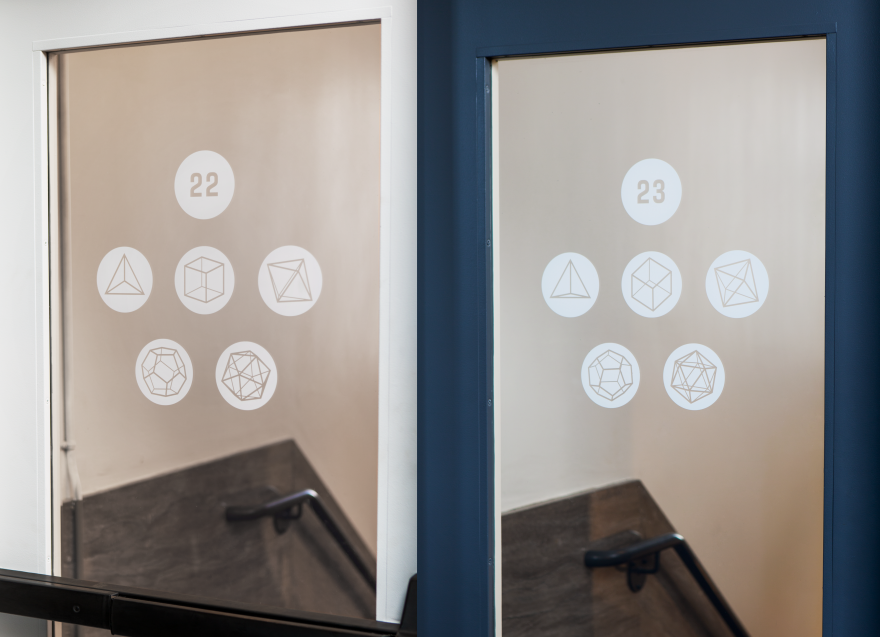 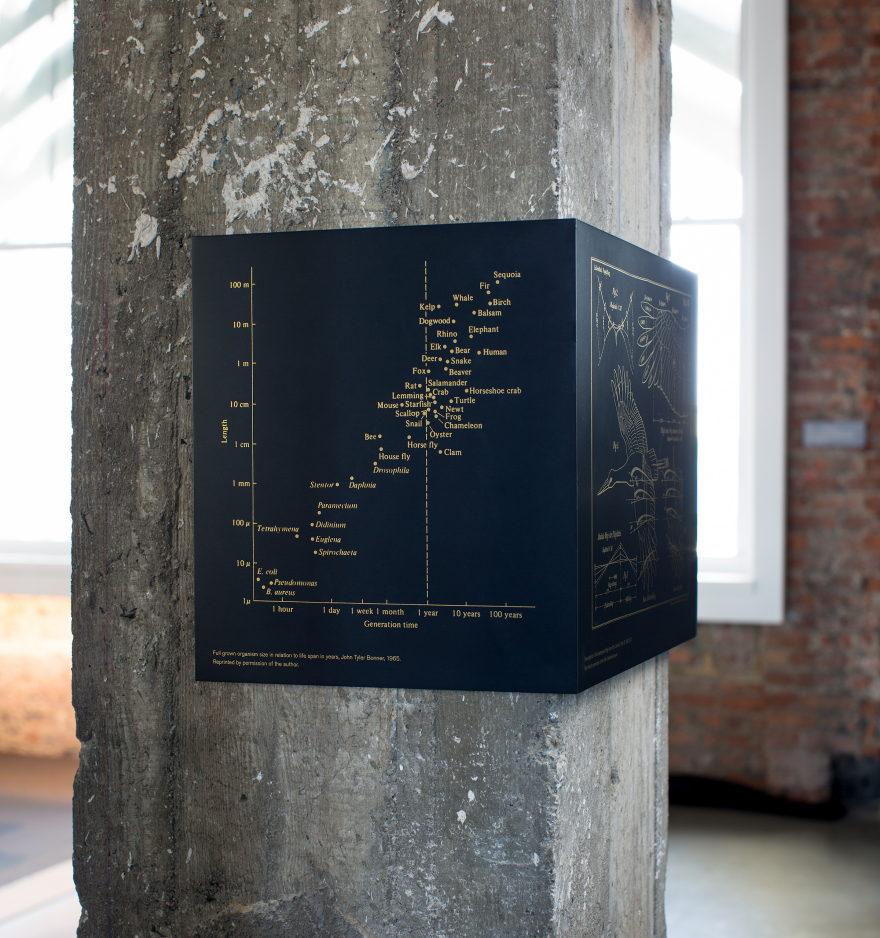 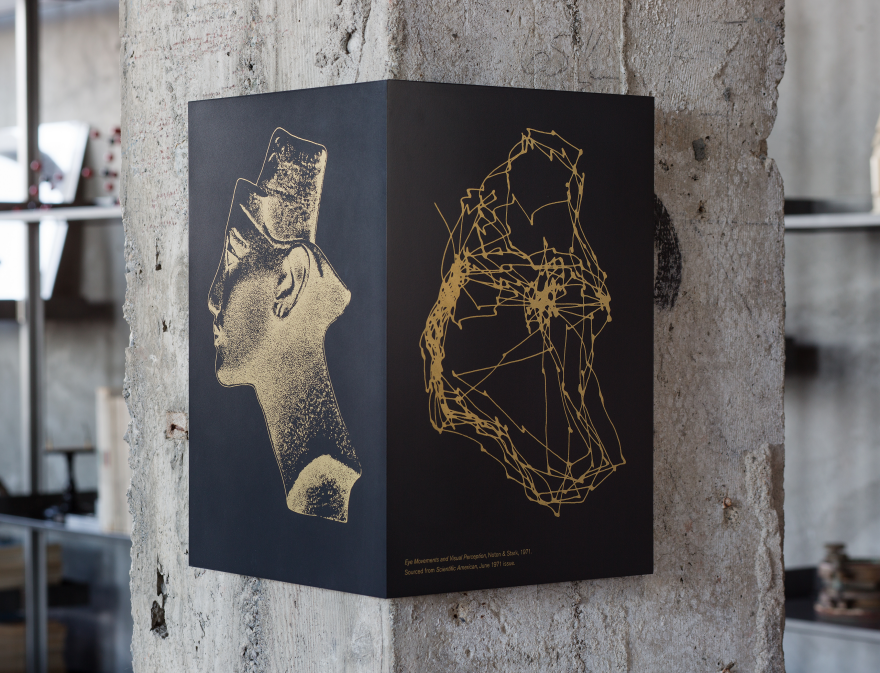 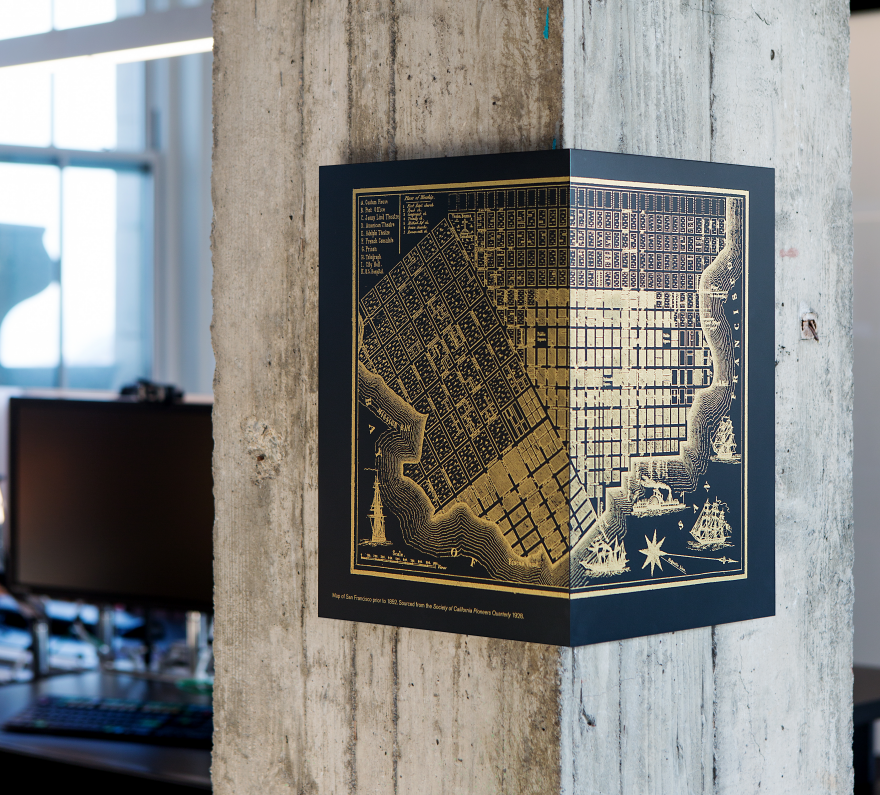 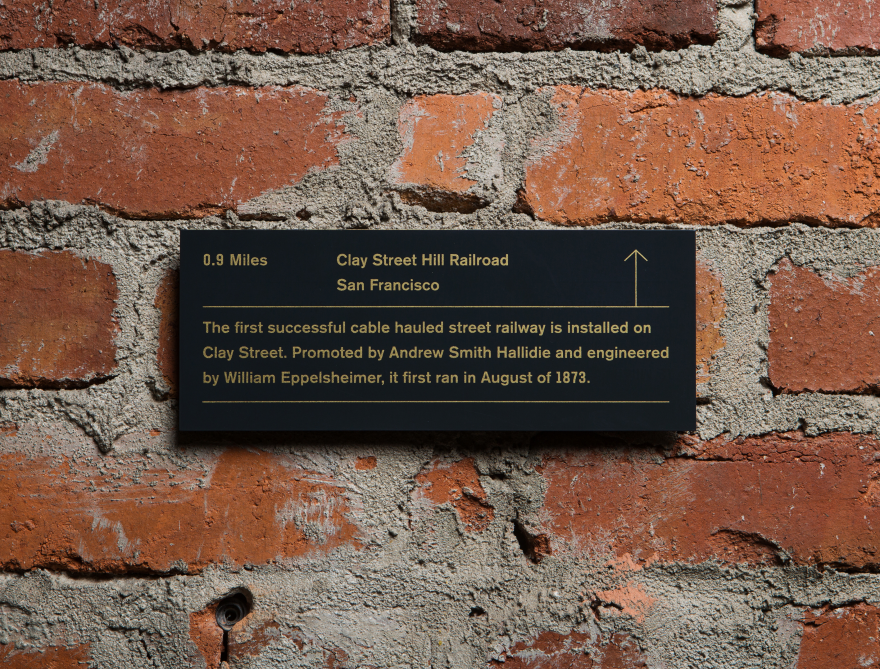 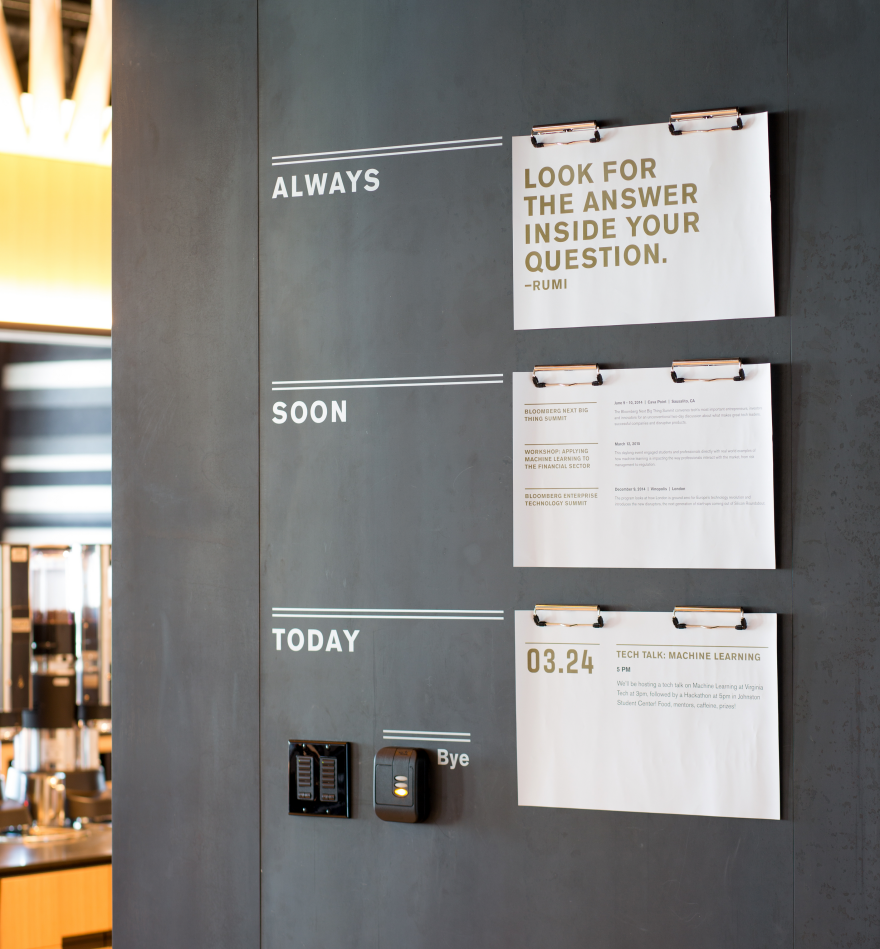 The Tech Hub is a laboratory of science and art. Its occupants take financial data and create new uses and applications for it. The main visual narrative revolves around the Platonic solids, symbols that also straddle the line between art and science. In ancient Greece, the Platonic solids were thought to be the base material of the physical world while also having spiritual and symbolic significance.

Meeting room names are derived from this system and visually play out most prominently as distraction banding. These solids "unfold" in tessellating horizontal bands that speak to both the concrete world (white vinyl) and the creative potential of that world (translucent vinyl).

This motif also plays out on the stairwell doors, where the "view" of the five foundational solids "rotates" from floor to floor. More complex solids are used in the larger rooms, such as the floor-to ceiling-sized ones for the glass wall of the "Void" (quiet reading) room on floor 23.

Because Bloomberg is planning tech hubs in other cities, we created a system that would also "localize" each instance. First, meeting rooms are identified not only by their names, but also a data-driven GPS location. Secondly, we used Bloomberg's brand typography for any text, but commissioned a type designer to create a custom number set inspired by the building's history. Lastly, through extensive research we identified key local research-based discoveries and accomplishments throughout history, imprinting them (with their distance from the office) on small plaques distributed throughout each floor on the existing brick.

Historical precedents were used "inspirational vignettes" that are silkscreened in metallic gold on steel panels and attached to the existing concrete columns. Sample vignettes include a diagram of how one person's eye moved when viewing the Nefertiti bust, one of Darwin's Origin of the Species charts, and an infographic that compares the size of an organism against its life span. These vignettes are fodder in which to motivate future accomplishments.

More practically, we created a system of clips on the wall facing the reception desks that allow the employees to post information about events (Today, Soon) and more whimsical, inspirational content (Always).

Execution was very well done. Graphics were unexpected but told a great story.

It felt true to the client and unique to it’s location. Sophisticated, but not too serious. Many layers of strategy.