Macbeth is a cost-effective task lamp that features a sliding Fresnellens module for precision beam angle control. Inspired by theatrical luminaire which often use glass Fresnellens for beam adjustment, Macbeth uses only a minimal set of hardwares to provided similar degree of versatility.The hardwares are designed to be made with common, cost-effective manufacturing techniques. Unlike existing theatrical luminaire, the components of Macbeth are exposed, with no extraneous casing covering up the internal mechanism.

Up until today, the adjustability of domestic lighting is still fairly limited, mostly being binary on/off control or dimming control. Beam angle adjustment is something usually reserved for theatrical/stage lighting as well as museum and gallery spaces, for these equipments can often be costly and cumbersome.Macbeth introduces the beam adjustability to home setting, allowing users to precisely define their personalized interior lighting, making lighting a much more interactive and accessible experience. 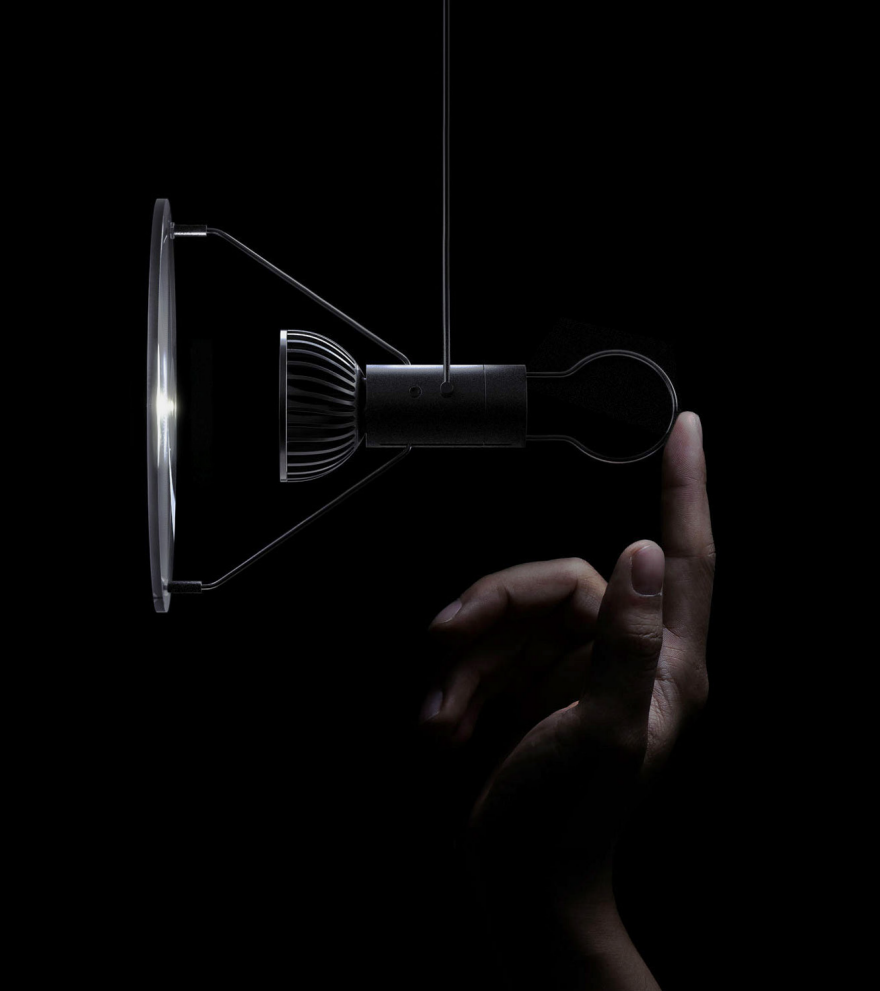 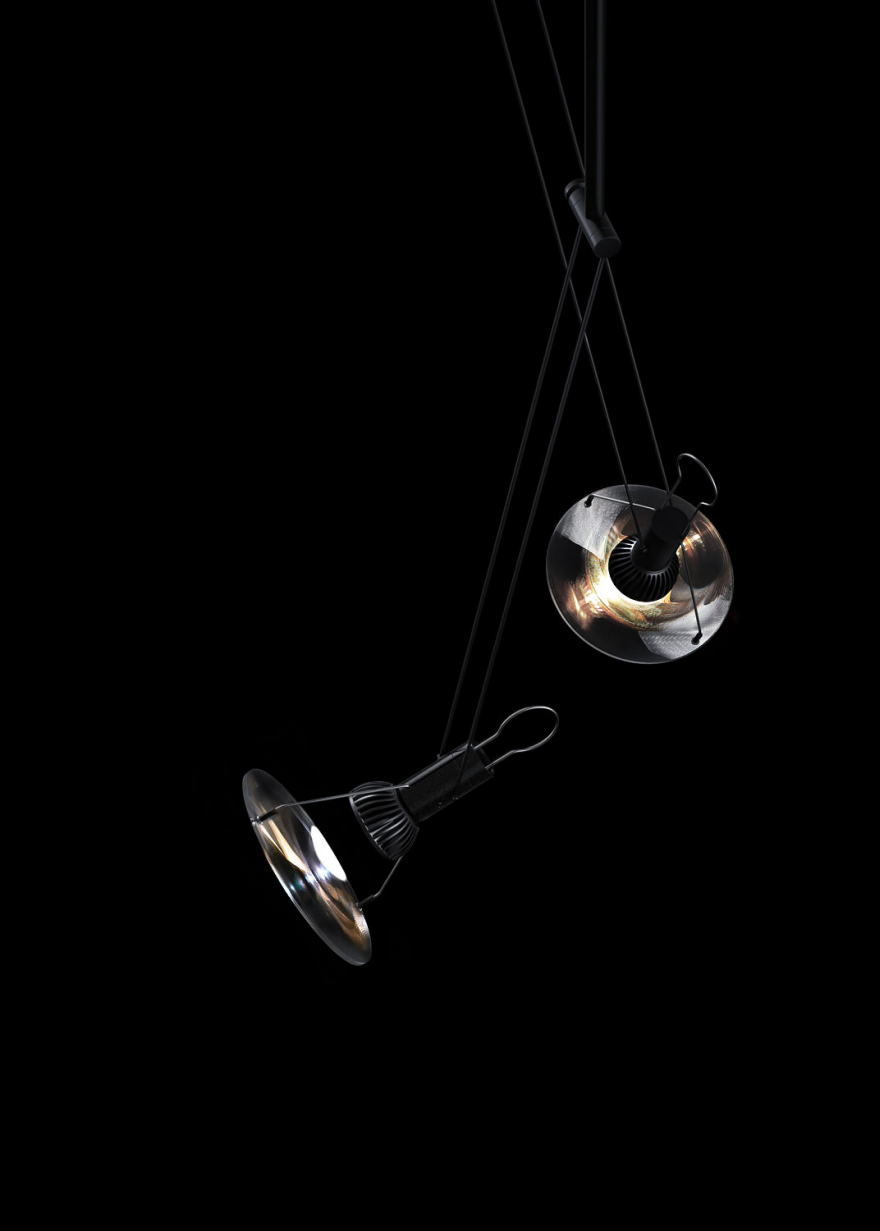 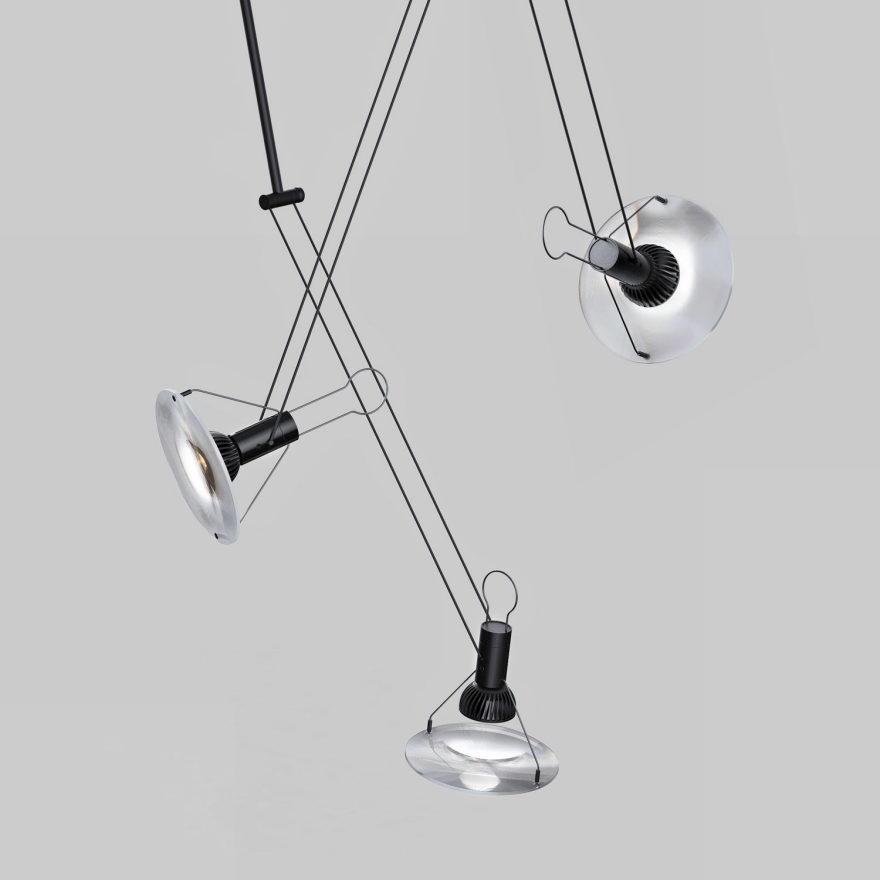 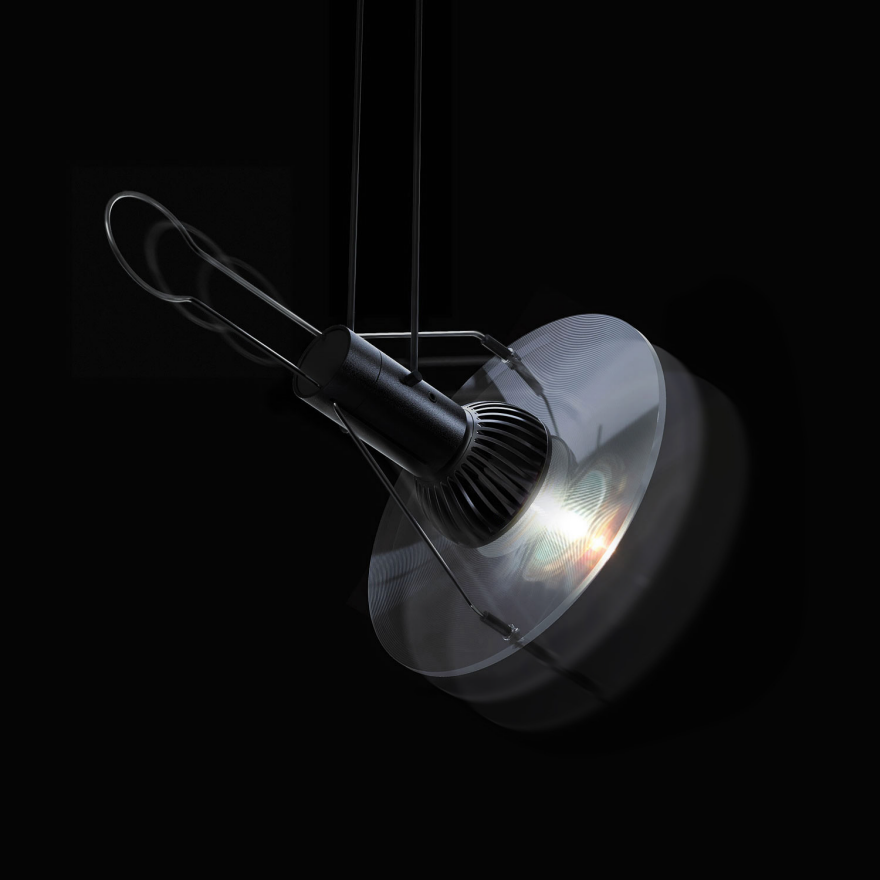 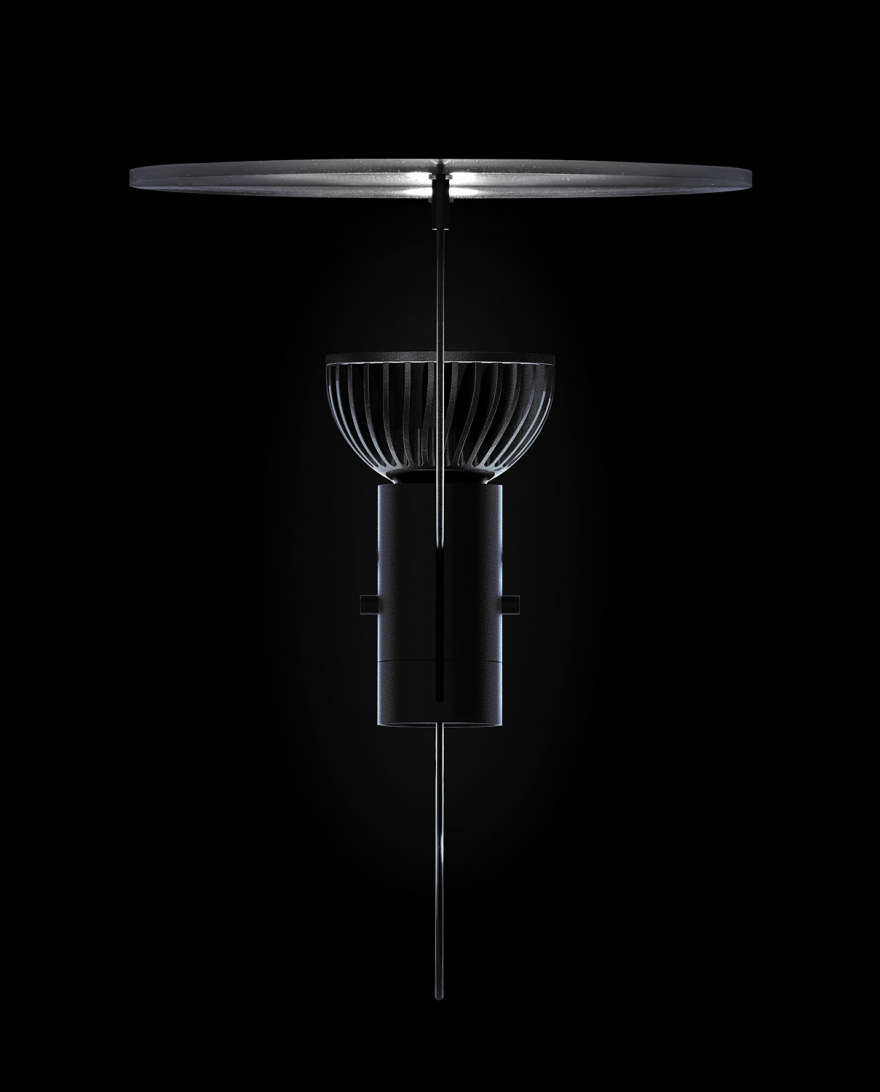 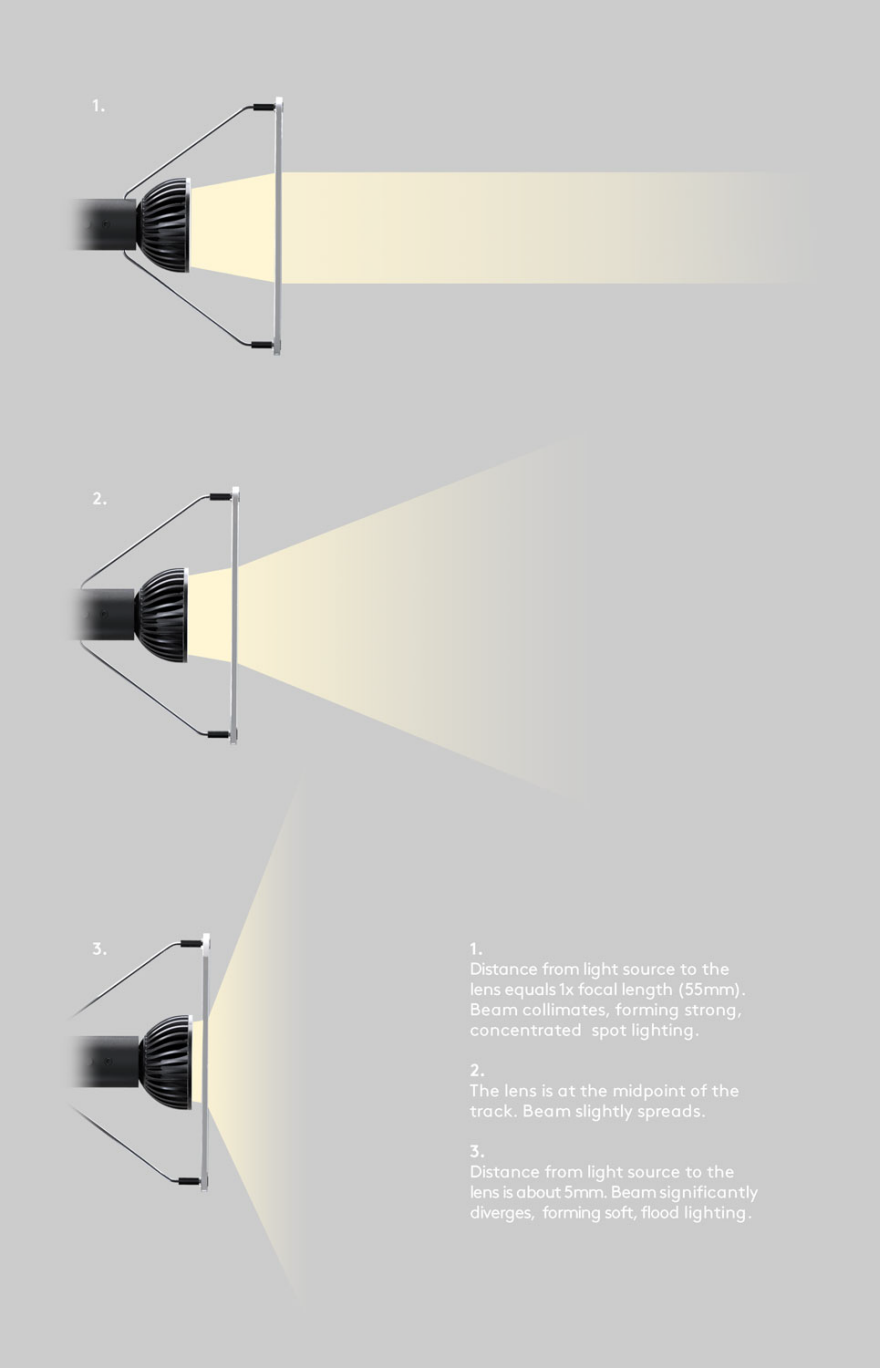 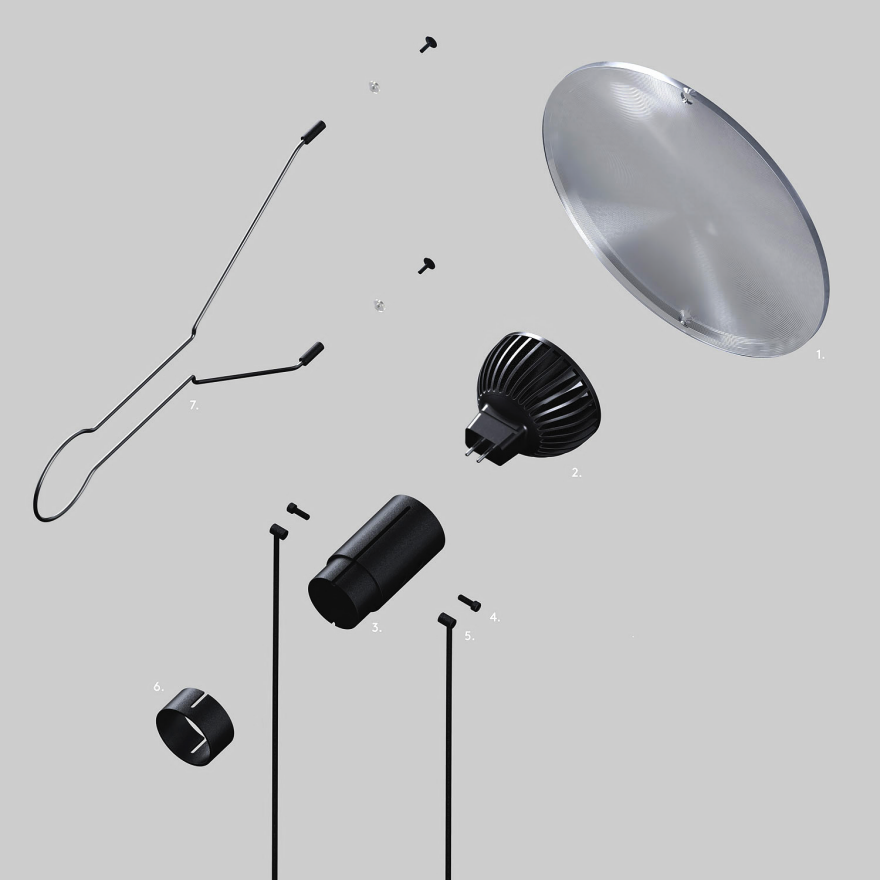 Exploded View Please refer to this image for project details

It will be necessary to briefly introduce Fresnel lens, for it is the major component used in the design of Macbeth. Fresnellens is a type of compact lens on one side of which molded a series of concentric small 'steps', this geometry allows Fresnellens to deliver similar optical characteristics of regular solid lens, with only a fraction of the thickness. Fresnellens collimates or spreads light in an even and soft-edged fashion; it is often used in lighthouses,car headlights, as well astheatrical and stage lighting equipments.

As an amateur photographer, I have gotten my hands on a decent collection of lighting equipments. Those that has a built-in Fresnel lenses are simply called‘Fresnels'. They are usually heavy and cumbersome black metal cylindrical-shaped lamps installed on tripods, often excruciatingly hot and bright, with a tiny slider knob on the side to move the Fresnel lens inside for beam angle adjustment. These lighting equipments are some of the more indifferent objects I have encountered in my life, the design shows absolutely no interest in you as the user, nor its own aesthetic presentation, yet they are robust and get the job done.

While theseFresnels might not be the easiest design objects for one to establish an emotional connection, I was totally fascinated by the functionality it offers, the freedom given to me as the photographer to infinitely finesse the beam angle, intensity,directionality, to get the exact light I want. Light is usually considered something imprecise and intangible; the friendly spec chart printed on the back of the box of your incandescent bulb might seem precise, but it is a different task to associate those numbers with the light you actually see and feel. Yes it is 60W and 3500 Kelvin, but what is it like? On the contrary, these Fresnel lamps I used in studio photography is one of the rare occasions that light actually feels precise. it is extremely empowering and fun to fiddle with light, shape it like shaping play-doh. you can control exactly how the light and shadows look, and it is absolutely fascinating. It is an inexpressible beautiful process to bring out non-obvious visual subtleties of objects by composing with light and shadow, and I believe this beauty should be accessible to average users.

Our lighting technology has gone a long way since the inception of the first tungsten filament incandescent bulbs, followed by numerous major technological breakthroughs: halogens, HIDs, fluorescent tubes, CFLs, LEDs, and OLEDs; yet curiously, people’s interaction with lighting has pretty much remained the same: flipping the plastic switch on the wall, on and off, sometimes dimming and color change. The other fundamental qualities of the light, such as directionality, location of installation, beam angle, often come as fixed in average home lighting products. Lighting fixtures are likely to be installed once and for all,perpetually casting the same light and shadows. Users are not really supposed to touch the lights, they are electrician’s field of expertise, not yours.

Macbeth is a response to all this. Alight that enables the users to easily define their very personal illumination based on their preference,personality, or mood; a light that offers the missing interactive element.It is the minimum viable hardware to realize the desired versatility. It is reductionist, rational, almost scientific, yet can be produced by using inexpensive and common manufacturing techniques.I envisioned Macbeth to be not just as another designer lamp, but an affordable module that works in groups for precise interior illumination. Macbeth can operate as a module in low-voltage halogen track system, a system already exist in millions of homes, at the same time it can also work as independent lamp in a slightly different configuration when supplied with power transformer.

Light has always been an essential part of life, just like water and air. As modern customers become increasingly versed and specific on their taste and need for other essentials, not much attention is paid to the quality of their home lighting.Our lighting technologies today are already sophisticatedly efficient and capable, designers can create with very little constraints, yet most products we see in the market make no attempt to connect and converse with the users at a deeper level. I wish through Macbeth to give people the access to freely define their personal illumination, to illustrate the possibility that lighting , just like clothing and furnishing, could be an extension of the user's personality.

The following list discusses the engineering intent of the major components of Macbeth in details, please refer to the image“Exploded View” .

1. Acrylic Fresnellens, 125mm diameter, 55mm focal length.Acrylic Fresnel lens is extremely light-weight and inexpensive. It has superior optical quality than most standard glass lens. An acrylic lens like this could cost less than $3.

3. Main body of the lamp, it houses the MR16 two-pin socket in which the bulb plugs in. Injection molded plastic, satin black.

4. Two 1-64 screws locks the connector pins from the sides to secure the bulb.

5. Anodized aluminum arms that functions both as the structural support and pivot, as well as power conductors. Operating at 12V, the seconductor arms do not require insulation and are safe to touch.

6. End cap that snaps in place, defines the end of the track for the lens frame.

7. CNC formed stainless steel wire lens frame, clips into the two tracks on the top and bottom of the main body, slides freely, and stays in place by the gentle clamping force applied by the wire. CNC wire forming is an economic and common manufacturing technique to make precise wire parts.

High on function and emotion, all in a small, but great project.

All the element necessary to create this small spotlight is matched perfectly and creates something very interesting and easy to produce.