Physical activity increases our well-being, is good for our health and enhances the perception of one´s own body. An active lifestyle can be especially beneficial for amputees. Working out with a well-fitted prosthesis strengthens the body and helps to achieve better control over the prosthesis. Problems due to compensatory movements can thus be reduced.

Regular walking prosthetics, however, are not conceived for running. Especially the foot components can not provide the energy return that is needed.

Special running prosthetics are not covered by insurance and are therefore not affordable for many amputees. 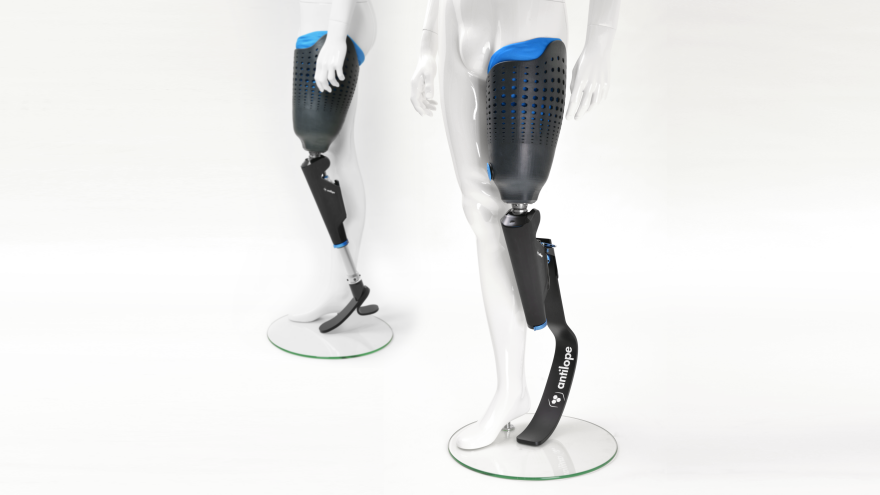 Two in one Antilope is a modular sports prosthetic system. 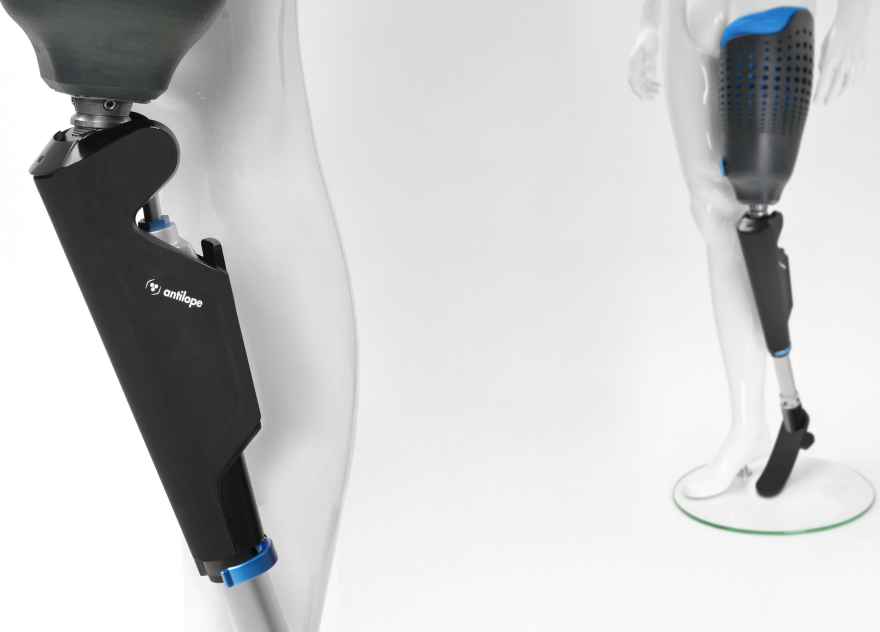 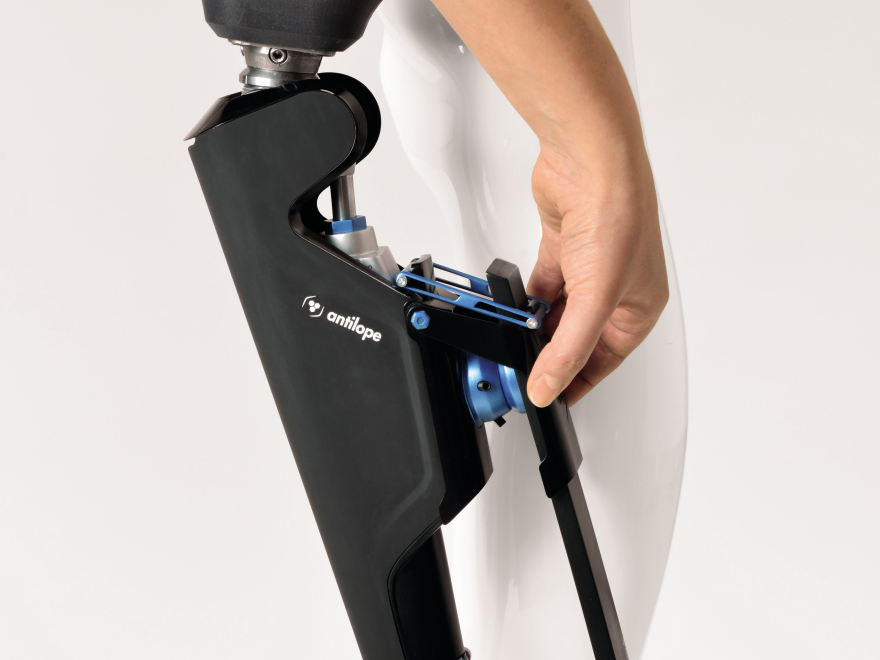 Running prosthesis The running blade is attached in the back of the knee component with another quick release mechanism. 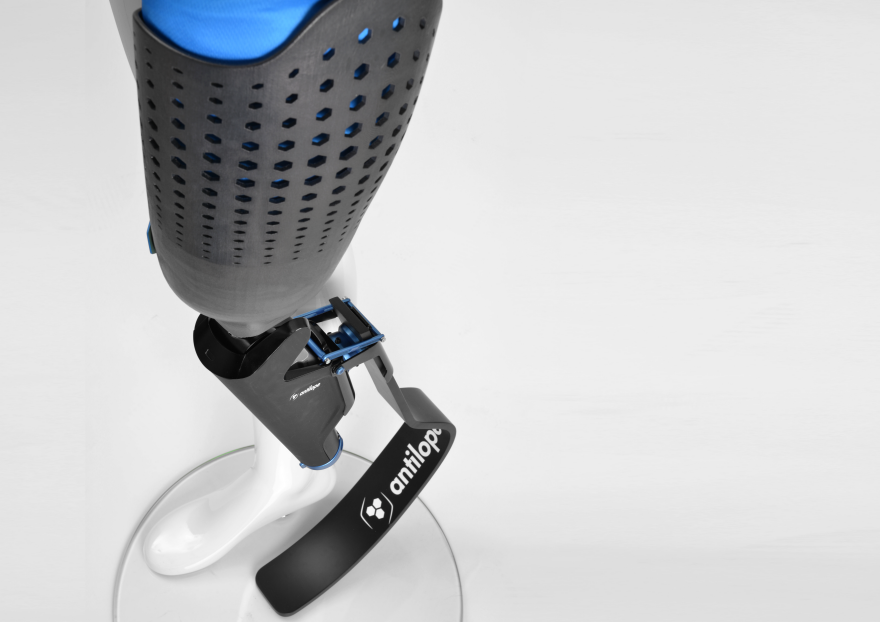 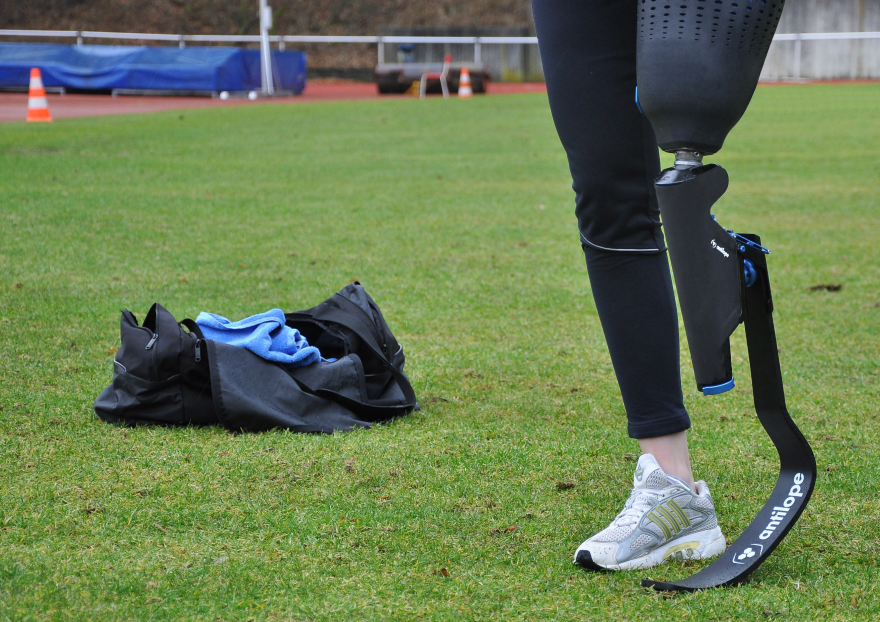 Affordable running prosthesis Antilope makes it easier and more affordable for amputees to go out for a run and stay active.

How I got started

When I started this project, I only had a quite vague idea about sports prostheses. In fact, I had never spoken to anyone who had lost a limb and what I knew was mostly connected to discussions on the media on whether or not amputee athletes should be allowed to participate in national or international competitions.

So, starting of, I first wanted to get a better idea about what the topic looks like from an amputees perspective, what they consider important and what problems they face. I was lucky to be able to attend a normal training at TSV Bayer Leverkusen, where a number of Germanys best paralympic athletes train.

I was able to talk to some junior athletes and follow their training, but also had a chat with Heinrich Popow, who is the world Champion in 100m sprint.

All of them were very open and happy to answer my questions and the atmosphere was very relaxed, with jokes about legs lying around or the next upcoming competition.

During this visit, I learned that most competitive athletes are actually sponsored and work quite closely together with prosthetic manufacturers. Many are in fact constantly modifying and improving their prosthetics themselves so they meet their personal needs. It is quite common that athletes become prosthetists professionally.

Manufacturers benefit from the athletes feedback on new products as well as from a marketing point of view: professional athletes are a big motivation for other amputees and they are promoting the prosthetic components they are using.

For many hobby athletes, however, there is a big hurdle to overcome on the way to being more active. At a price point of about 13.000€ and with no coverage from insurance companies, a sports prosthesis is a serious investment.

When I learned about this, my goal for the project was clear: I wanted to create an affordable running prosthesis for amputees.

To get a better idea of what problems active amputees face and what they consider important or simply beautiful in a prosthesis, I contacted people on social media. Some agreed to answer my questions in an interview, some participated in a survey I created.

An improvement would be to minimize transpiration in the socket. After fifteen to twenty minutes of playing, the stump is totally wet. I even lost my prosthesis during a game once.

During all phases of my project, I received a lot of help from a prosthetist who specialized on providing prosthetics for active amputees. He showed me how a prosthetic socket is made and how the different components come together to suit a persons body. I realized that the high prize of a running prosthesis was determined by the technology in the components, but also by relatively low production volumes and the individually manufactured socket.

I challenged myself to create a product that could minimize the cost of a running prosthesis without compromising the components quality.

When I came up with first ideas, I was able to return to the prosthetist to get professional feedback.

While we were discussing the idea of having a multi-purpose prosthesis that could be used in everyday life as well as for sports, he pointed out to me that the biggest problem was the foot component:

Running with a walking foot component is a little bit like running in Italian leather shoes. You can do it, but it does not work very well.

He further explained that the spring-like function that carbon fiber blades provide is necessary to obtain a natural running movement, while walking foot components are optimized to provide stability in everyday life.

Finally, I decided to develop a modular prosthetic system. It can be transformed from walking to running prosthesis without compromising the quality of either one. A carbon fiber blade, compatible with the regular walking prosthesis is all that is needed to start being more active.

The components can be changed by a simple quick-release system, so it does not take more time than changing from walking- to running shoes. The running blade is attached in the back, providing enough space for its spring function to work for tall and short persons alike.

The concept of 3D-printing the prosthetic socket aims to improve the ergonomics of the prosthesis. The connection between socket and residual limb still causes many problems, especially to the amputees skin. Opening up the socket surface by integrating a pattern improves the breathability. This helps to reduce the stress caused to the sensitive skin in this area.

During the design process, I got feedback on different mood boards and design directions from multiple amputees through an online survey. Most of them supported the approach of a design that is sports and technology oriented. Many told me that they prefer to have a prosthesis that is eye catching and interesting, rather than one that tries to hide the disability by mimicking a human leg.