Improving current infrastructure, education and policy is a long term response to cycling safety however, more immediate intervention is also required in the meantime. Research carried out in the field of cycling safety has found that the visibility and recognition of cyclists by other road users plays a pivotal role in the actual and perceived safety of cyclists. Project Flock explores new concepts of bicycle lighting design. It utilizes emerging digital technologies to create an adaptive lighting system that aims to improve the visibility of cyclists and therefore their overall level of safety.

The Flock Light is an Adaptive Bicycle Light intended for use on public roads and pathways. The light consists of a range of compact, high powered LEDs in Red and Amber colours that project light onto the rider's legs and the ground. Research has proven that this concept of 'biomotion', whereby moving parts of the rider are highlighted, is far more effective in making cyclists more noticeable to other road users. Through an 'Adaptive Lighting Engine', The Flock Light adjusts it's output automatically to maintain the most optimal level of 'conspicuity' to other road and path users through sensing local environmental conditions, and internet sourced conditions such as geolocation, date, and speed. The lighting output of the Flock Light consists of various animations that adapt to suit different environmental conditions. 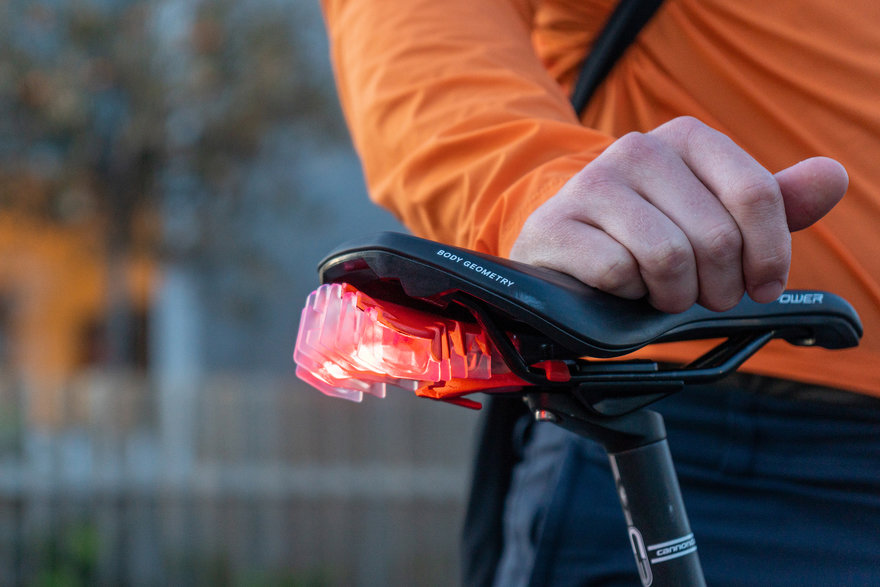 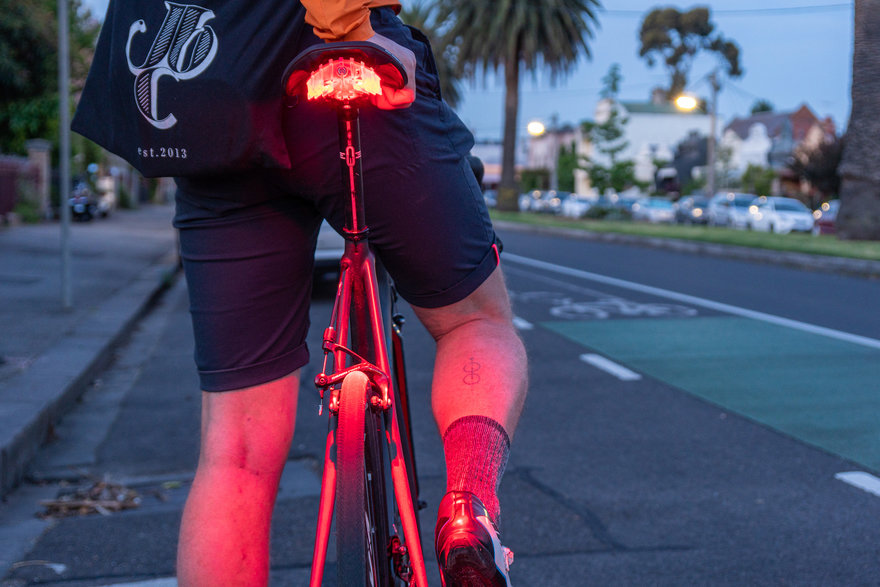 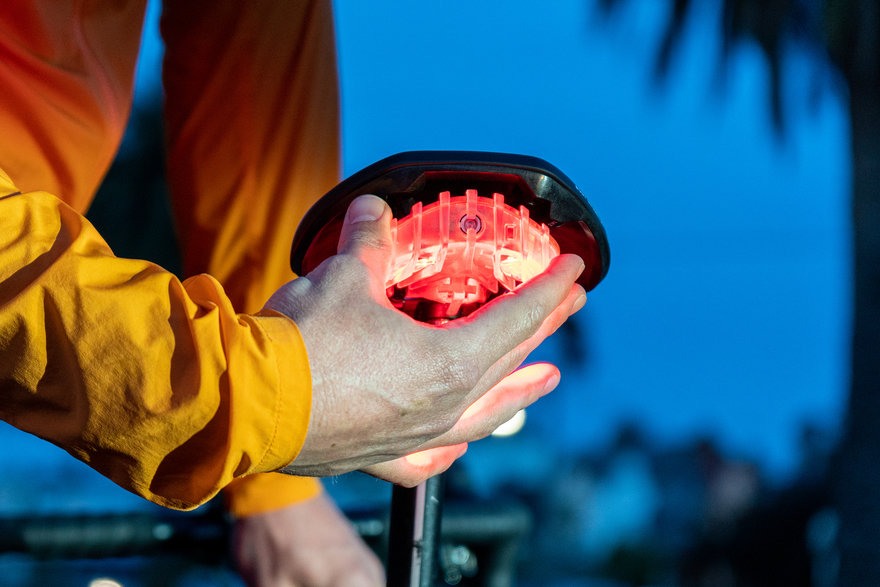 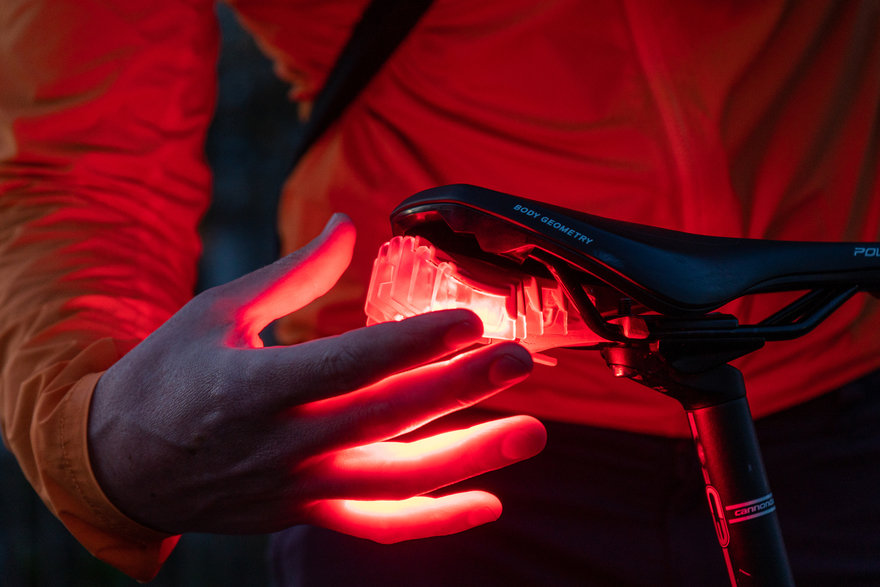 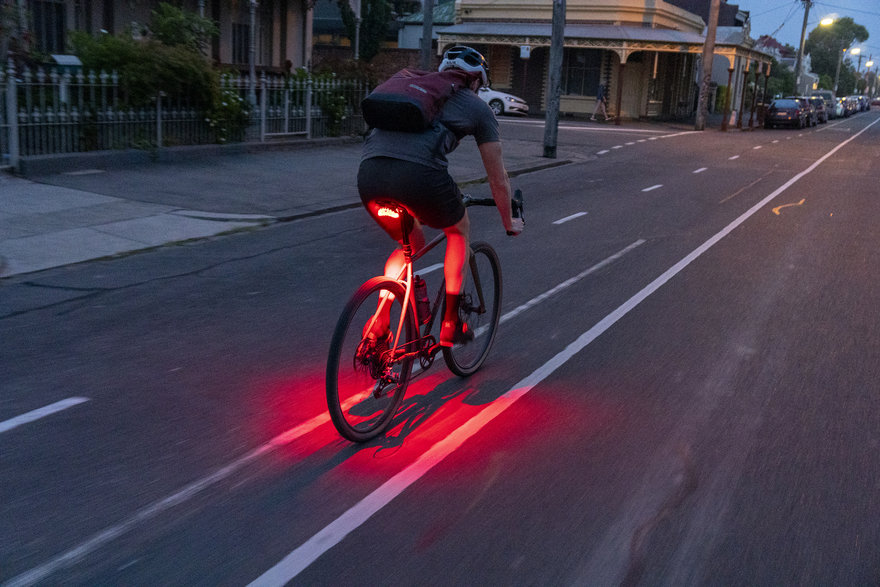 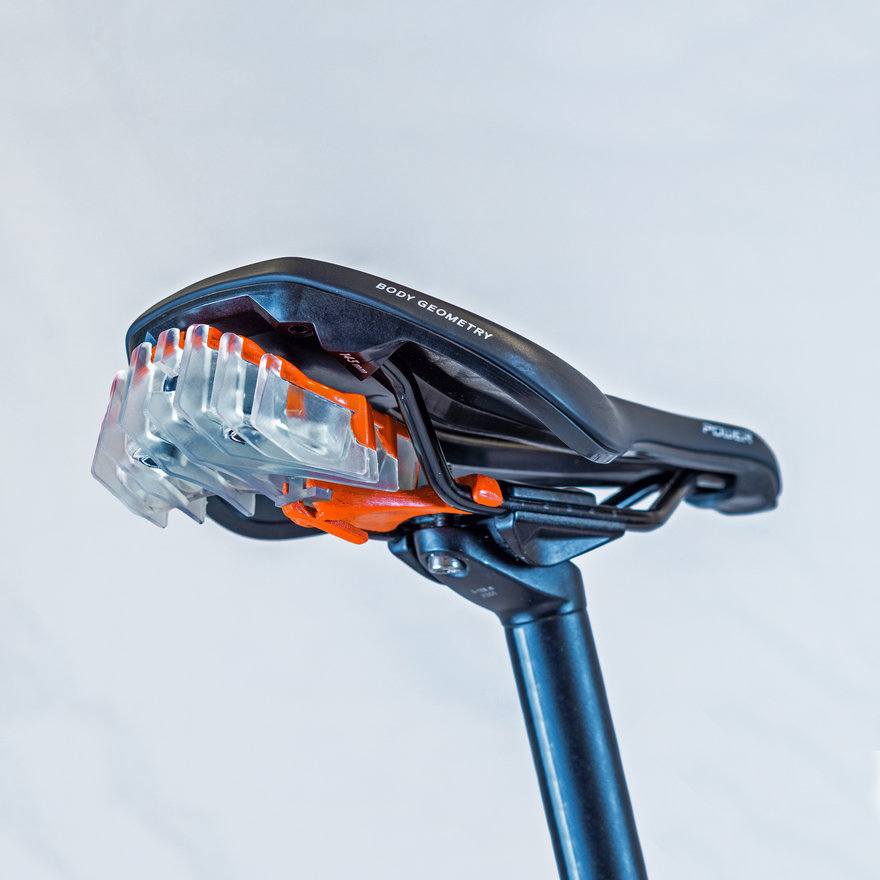 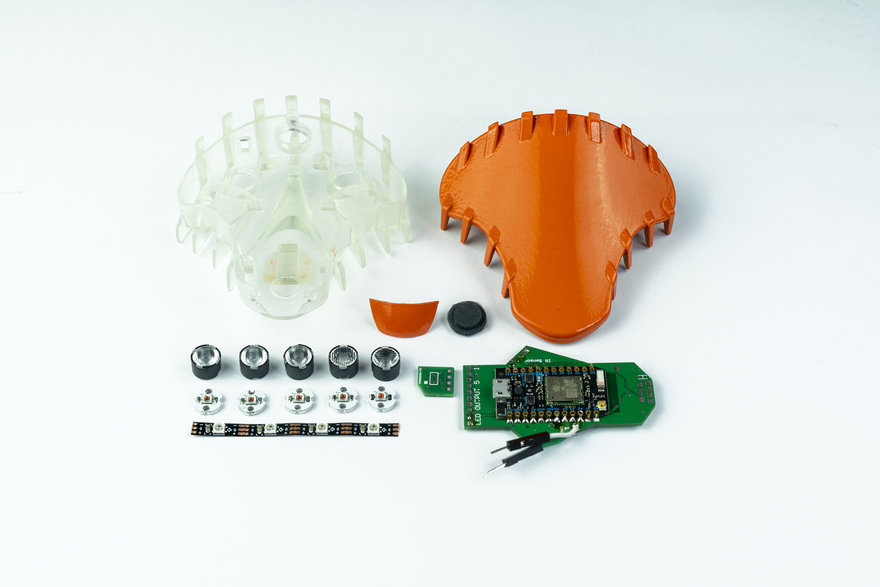 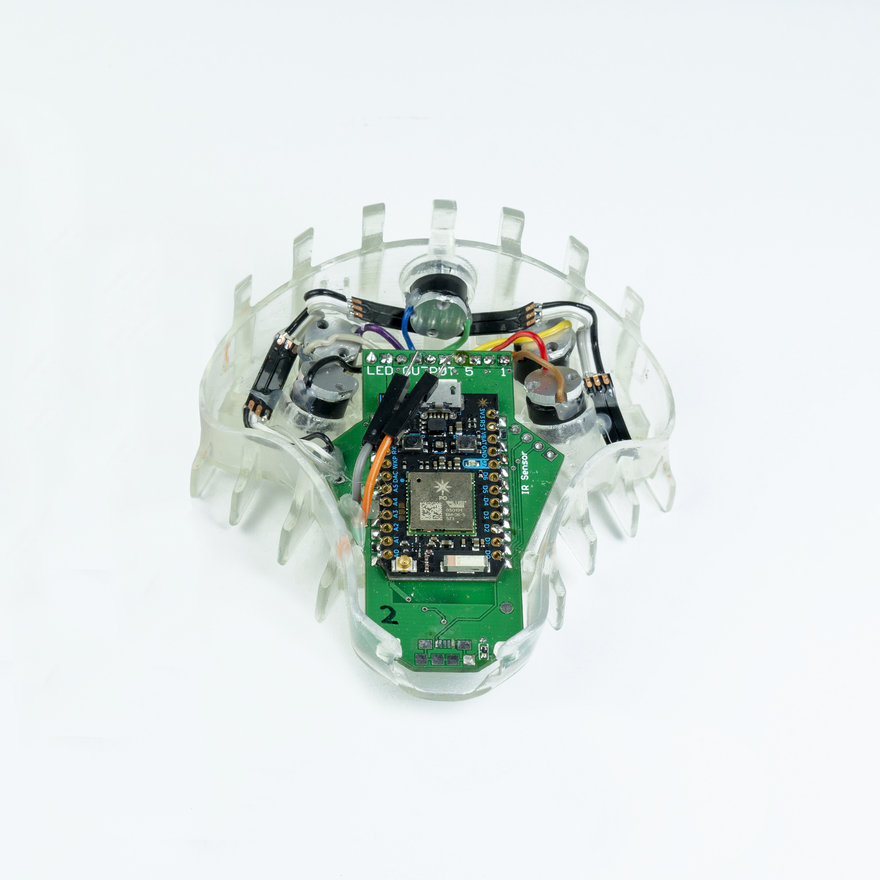 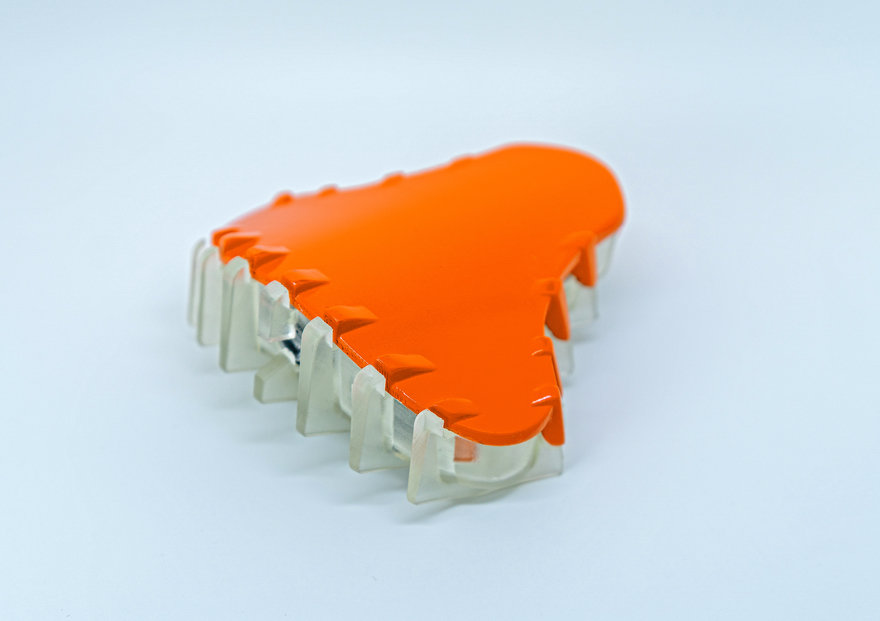 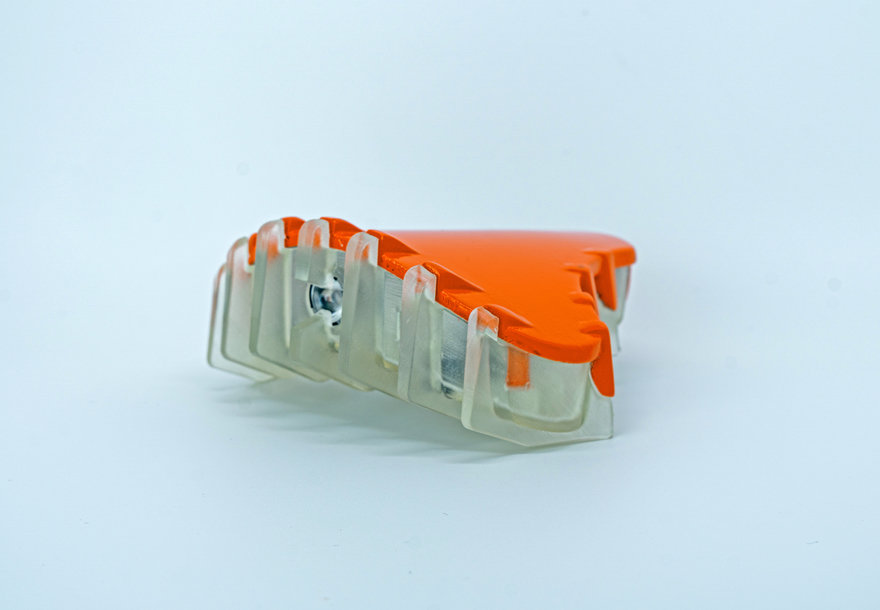 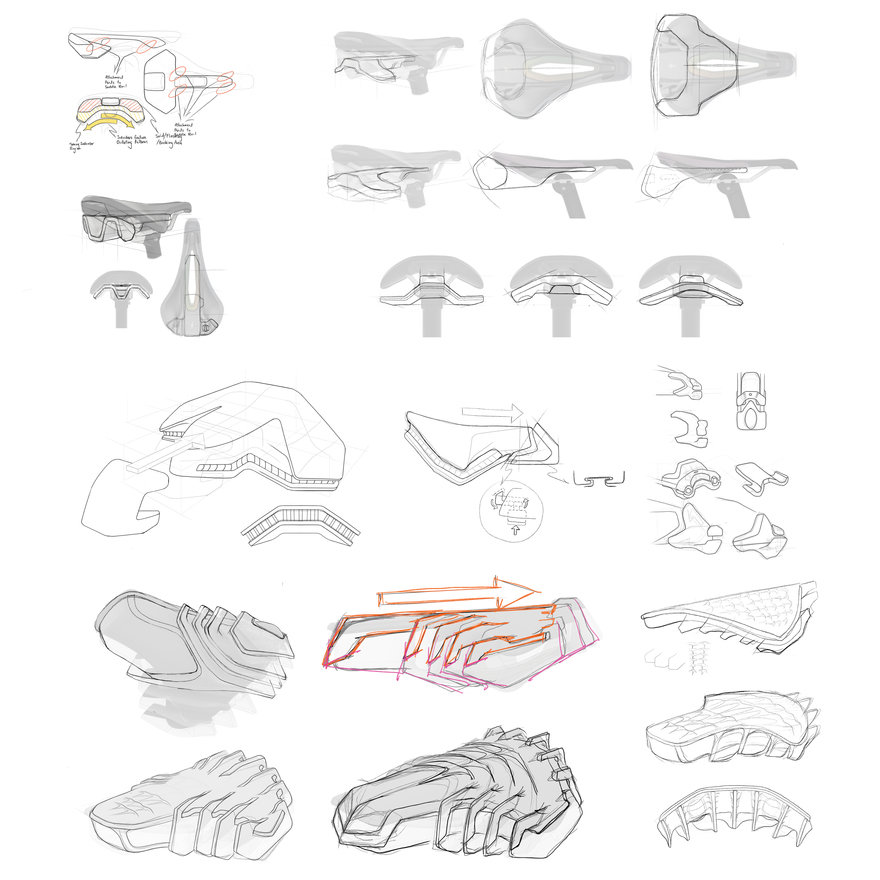 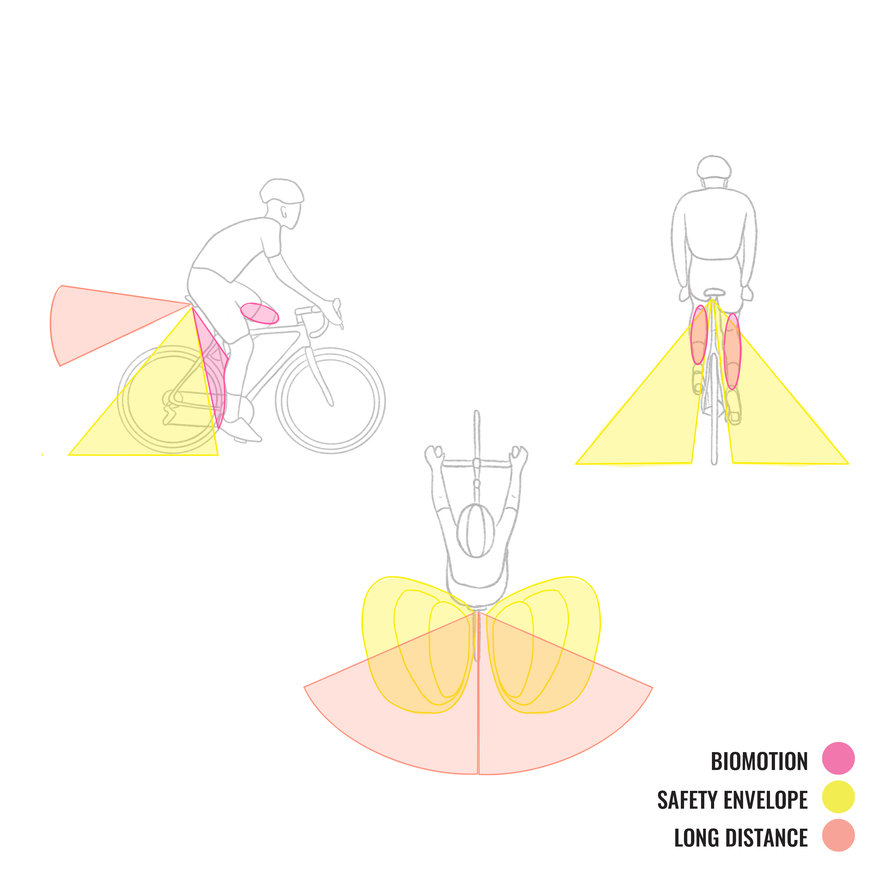 There remains enormous potential for the continued development of a design that seeks to improve cyclist visibility through using the theoretical framework established in this Project.

This framework includes theories of biomotion, visual perception, and Human-Computer Interaction, together with the methodologies of IoT.
Because of the way the human brain works, we do not register everything visually and the brain operates on visual memories. "Inattentional Blindness" is part of the human condition and is one of the major causes of accidents and human (Green 2013). Unless something demands our attention we simply do not 'see' what might be directly in front of us.

To get the attention of the human brain, something needs to be conspicuous. Conspicuity can be divided into 'sensory' and 'cognitive'. Working on 'sensory' levels means being able to perceive objects of high contrast in a scene however what is more effective is the type of conspicuity that holds significance to the viewer (Green 2013).

Biomotion and its application to Bicycle Lighting Design have great merit in increasing the instance of meaningful Cognitive Conspicuity. Biomotion theory comes courtesy of a Swedish scientist, Gunnar Johansson that pioneered it in the 1970s (Fekety, 2018).

Since the inception of this theory, Biomotion has been applied to the improvement of various areas of road safety.

Project Flock is concerned with the design of a bicycle lighting product that seeks to use the cyclist and the immediate surfaces around them as a projection surface. As many bicycle lighting systems focus on improving the conspicuity and visibility of the bicycle light itself, Project Flock is a major deviation away from the status quo within the field of bicycle lighting design.
By utilizing the theories and precedents for current and future Bicycle Lighting Design, using inspiration from the established field of Human-Computer Interaction, Interactive Design and implementing the emerging fields of IoT(The Internet of Things), this project aims to develop a Bicycle Lighting Product that responds to the issues of Cyclist Visibility.
Arguably not everyone who uses a bicycle could be called a 'cyclist' however for this project the user is referred to as a cyclist. The main ways a Cyclist rides a bike can be divided into utilitarian and recreational modes. The physical environment of these modes take place in both on-road or off-road situations and primarily in public spaces. This project focuses on those users that are 'on-road', this includes public roads and paths. A user-centered design approach has been adopted to connect with potential users and stakeholders to gain meaningful insights to drive the development cycles of this project.

As a product of this research framework, it has been found that there is opportunity to design for a wide cross-section of the cycling community however based on the results of a survey conducted specifically for this project it is believed that for the best outcome this project will work closely together in the aforementioned development cycles with cyclists who identify as recreational cyclists that spend the majority of their time riding 'on-road'. Whilst this may seem to exclude cyclists who cycle exclusively for utilitarian purposes, research shows that the recreational cyclist is additionally active in engaging in utilitarian modes of cycling. The level of participation these target users have is associated with higher exposure to the dangers of cycling and therefore are they are best situated to benefit from the improvements that could be made to Cyclist Visibility within the framework of this project.

It is commonly believed that cyclists are most vulnerable at night and during low lighting conditions (Dancu et al. 2015), and as such a large majority of products are designed for maximum brightness and perceived visibility. This presents somewhat of a problem, however, as while light intensity is needed for conspicuity, the very high lumen output of some bicycle lights can often startle or blind other road users, therefore, proving dangerous.
This project proposes that current Bicycle Lighting Design by trying to achieve maximum 'sensory' conspicuity is startling and blinding motorists. The German 'Stvzo' standard currently enforced in Germany, has responded to the problem of powerful lighting units by limiting lumen output and prescribing the direction and where the light is cast so as not to startle other road users.

For the application of Visibility Perception theory to be successful in this project, a suitable device would need to maintain a suitable visual contrast in any given scene to achieve a magnitude of sensory conspicuity that would get the attention of other road users without blinding or startling them. Similar to how the Flare R tail-light designed by Bontrager adapts its lighting output based on the ambient light level a scene to achieve the best lighting output, there is scope to apply this theory and functionality into this project's product-based outcome.
Currently, there is a growing trend towards the application of 'biomotion' to Bicycle Lighting Design.

"Efforts to enhance bicyclist conspicuity that involves highlighting the rider's biological motion will be more effective than those that do not" (Fekety 2018)
There is much potential for this theory to be at the center of applied theories in the context of this design project. A study carried out by the Clemson University found that mounting bicycle lights to the heels of cyclists allowed them to be seen by motorists 5.5 times earlier due to the motion of the lighting (Edewaard et al. 2017).
With the main aim of this project to make cyclists more visible and get the attention of other road users, the application of Biomotion theory in the development of a new Bicycle Lighting Product moves towards achieving this by trying to achieve more meaningful cognitive conspicuity.
The Bicycle Lighting intervention proposed by this project could benefit by applying the methodology found in the field of The Internet of Things (IoT) to expand the capability of the bicycle lighting systems. By utilizing IoT methods and technology and Autonomous Vehicle Communication methods, there is scope for a Bicycle Lighting system to have the ability to acquire data from devices around it to maintain the best possible lighting settings heighten the above proposal for heightened interactivity. In this way a device that senses its environment locally can use additional data received from devices around to improve its function. What other road users are doing close to the target user will initiate, when required, automated feedback signals to the user and automated changes in the visual output of the device. The overarching aim by utilizing this methodology is achieving a higher state of situational awareness for the user and the modulation of lighting output for improved cyclist visibility.

Additionally, the ability to communicate to other devices means that this Bicycle Lighting Device could generate Naturalistic Cycling Data that can not only be shared with the government but also users on a social platform to aid in hazard awareness and cycling safety education. Naturalistic Cycling Data is currently the most effective information to use for improving infrastructure and policy change.