Stratus: A technical mid-layer capable of varying its insulation value tailored to the thermal needs of the user.

The design objective for this garment was to create an "invisible layer" that enables the user to alter the insulative CLO-value of the upper body layering system without adding or removing any layers. This design objective will be met if the user is able to thermoregulate effectively at different exertion levels without removing any layers. To achieve this goal, the garment must be able to increase or decrease its insulation value, maintain breathability, regulate moisture effectively, and sustain the user's overall comfort.

To that end, an innovative baffle system was developed which allows the user to increase or decrease the loft of two front baffle panels which regulate the thermal value of the jacket's core by an CLO-Value of up to 2.06. Moreover, the use of adaptable physical ventilation armpit zippers were used to improve moisture management and convective cooling within the garment. Specific face fabrics were strategically placed in high-wear areas to increase durability in locations where there was increased interaction with other elements such as a backpack, gloves, or helmet. The technical insulated jacket that was developed throughout this design process thus allows the user to better regulate their body's temperature and moisture levels, maintaining excellent mobility in a lightweight and easy to use mid-layer.

This design objective is what sets this garment apart from the competition as there are countless options for consumers when it comes to insulated mid-layers. The differentiating factor however is the functional hierarchy the competition uses for their products, placing insulation, mobility, and weight in alternating orders at the top. This project replaces 'insulation' with 'thermal balance' which requires the garment to react to the needs of the user rather than simply insulate successfully. Moisture management is not something that companies are making a priority unless the garment is for an extreme exertion sport such as cross country skiing or running. The options for these sports, though breathable and designed to handle moisture, do not have the insulation needed to keep an individual warm if they stop moving, as these jacket use perforations and slit openings to increase airflow and manage moisture. This project helps redefine the priorities set out by the industry for functional apparel design.

The next steps in the development of this garment will be a 'phase two' iteration of the baffle system that will be designed to better ergonomically "wrap" the user. This development should include further research into baffle material and size to find the optimal insulating material while maintaining breathability. An investigation into stiffer baffle reinforcement material and its correlation to the chimney and bellows effect, as well as its influence on comfort, should also be pursued. Furthermore, the use of a lining to enclose the baffle system should be considered to reduce air movement within the baffles, and increase the durability of the baffles themselves by reducing improper user manipulation. 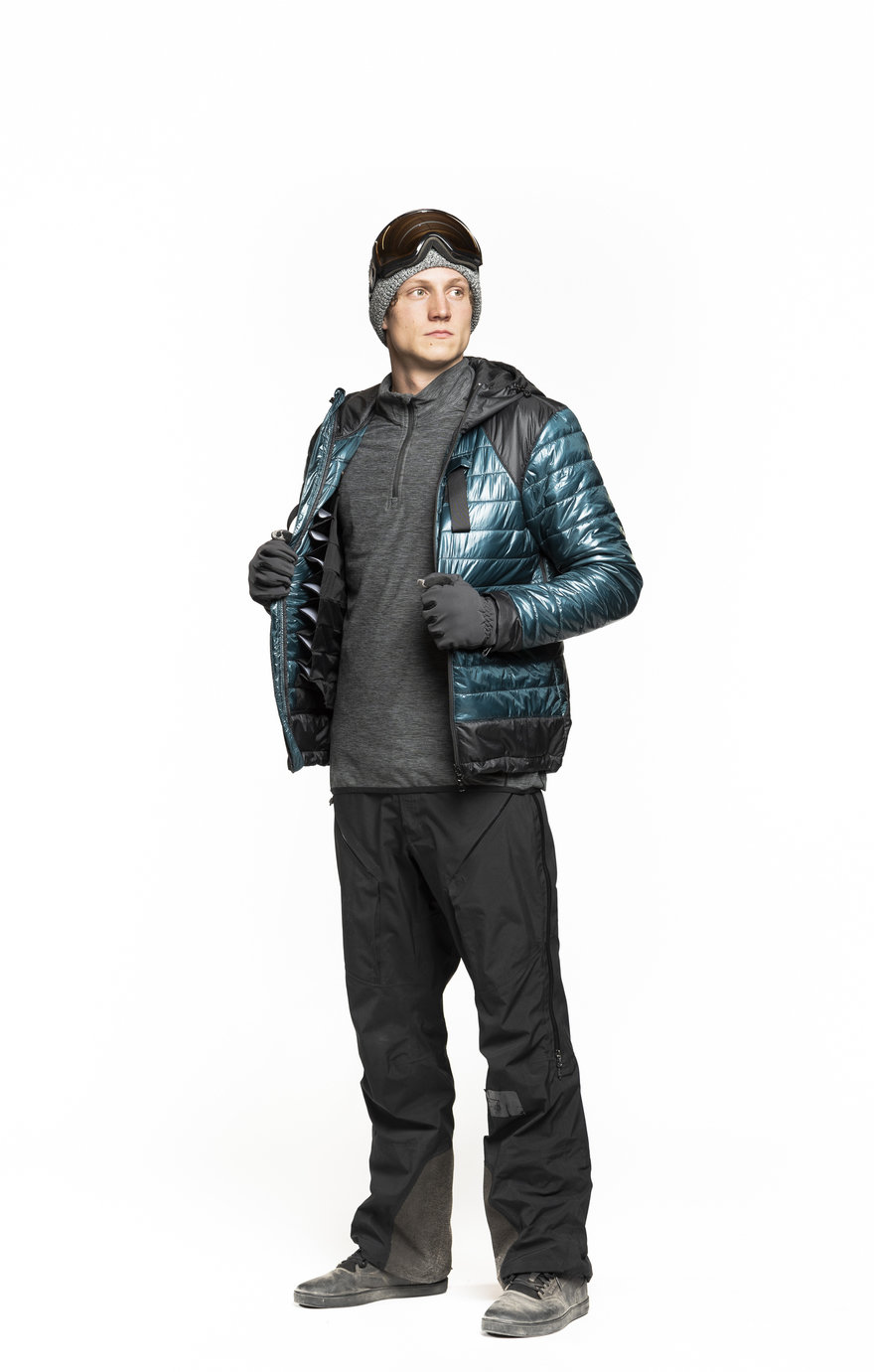 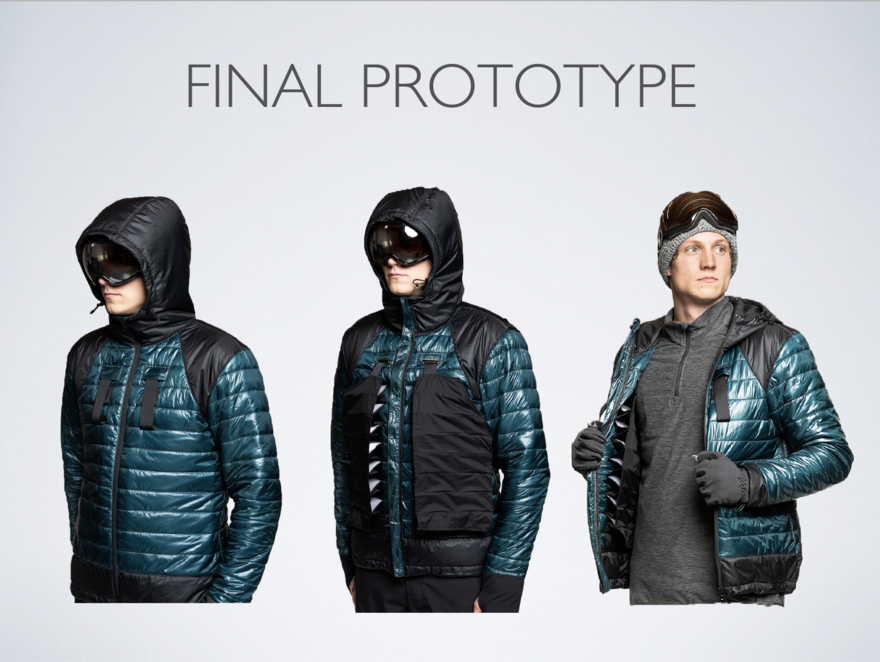 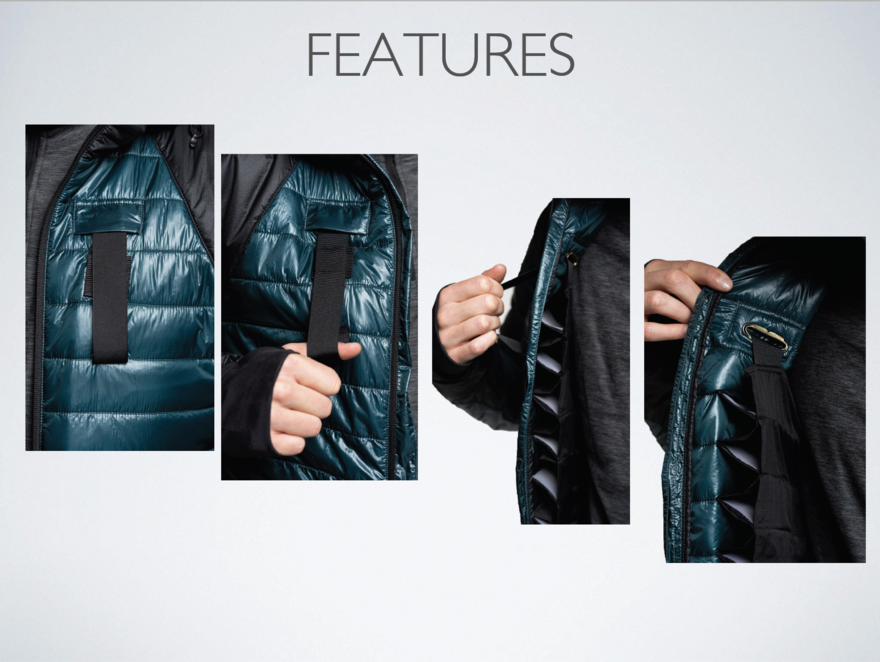 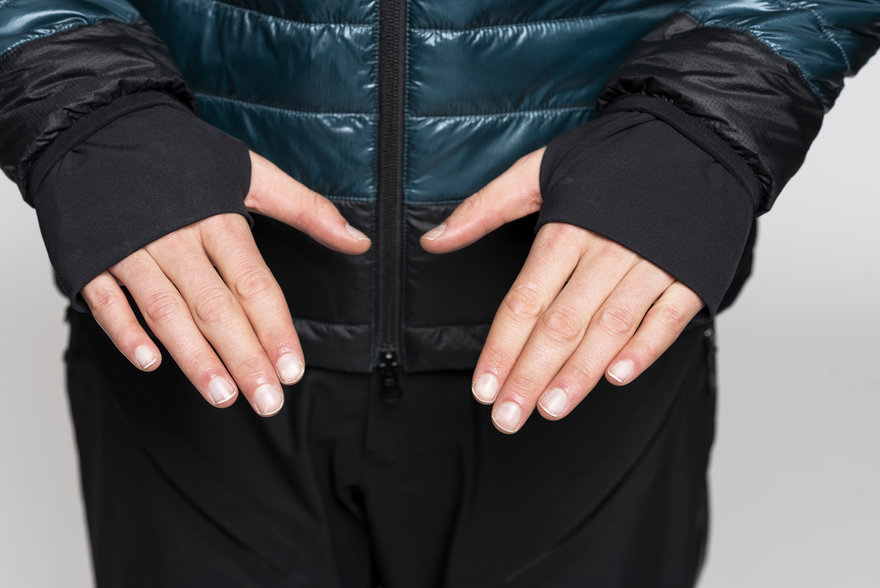 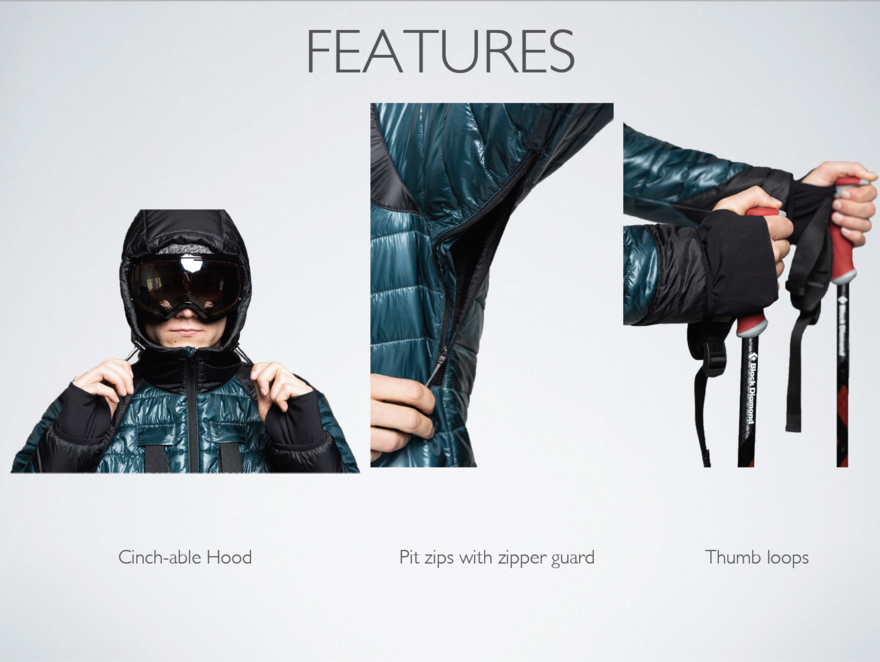 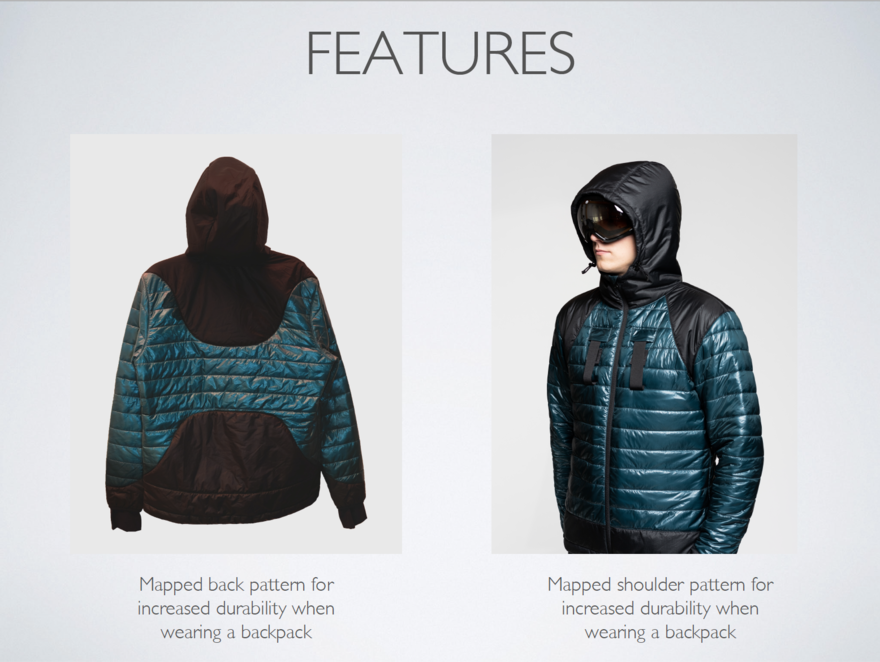 Features Mapped back and shoulder pattern 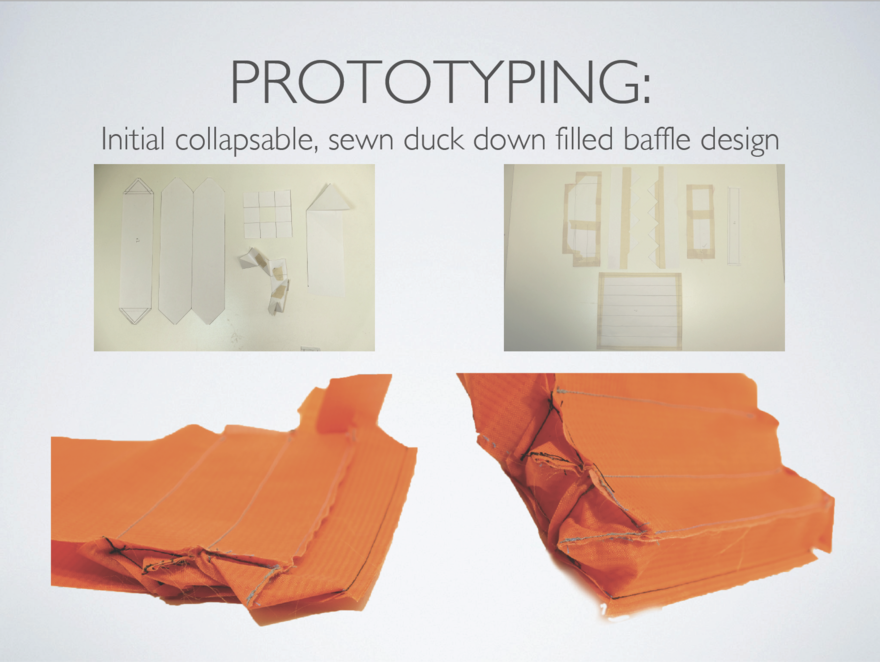 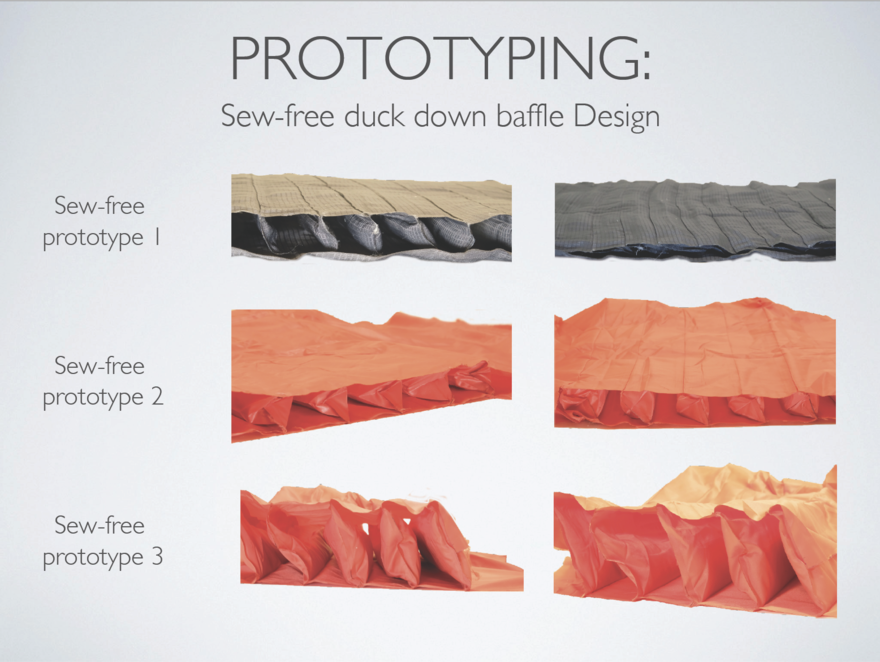 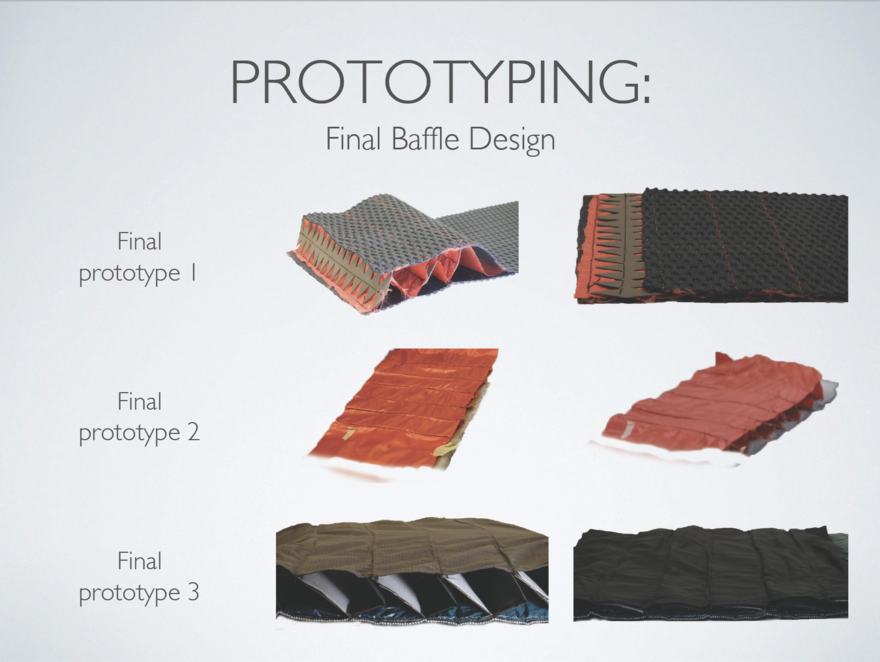 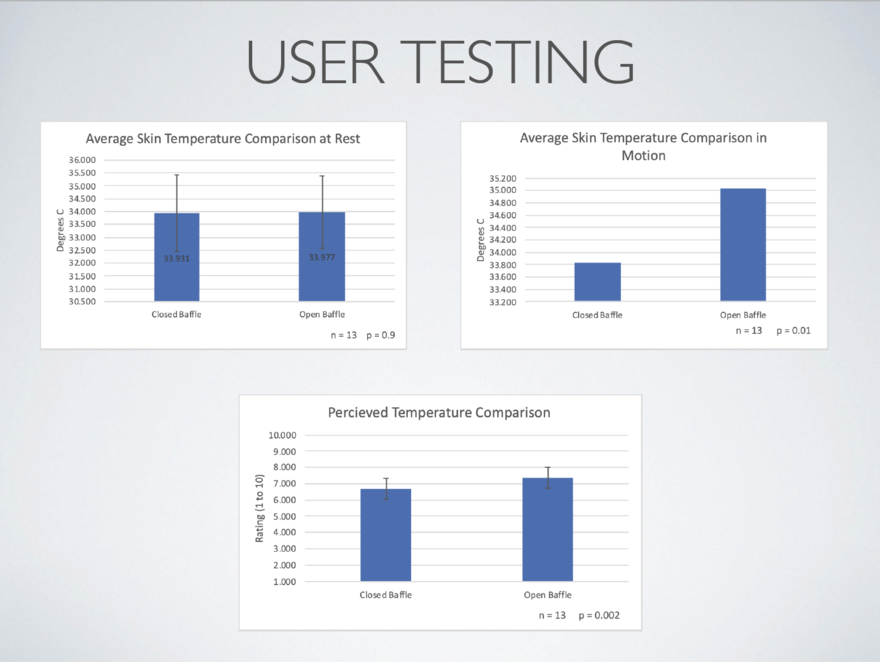 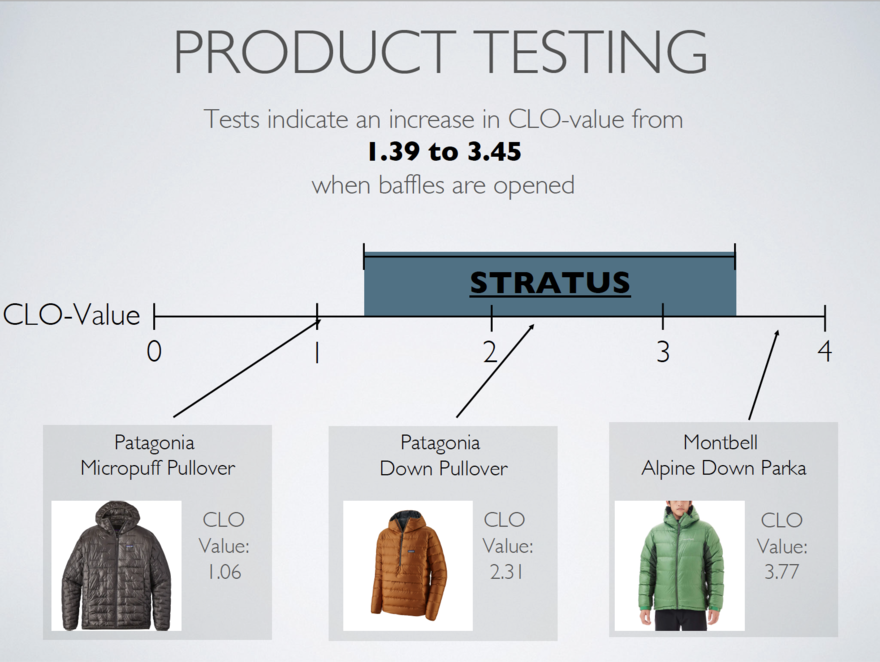 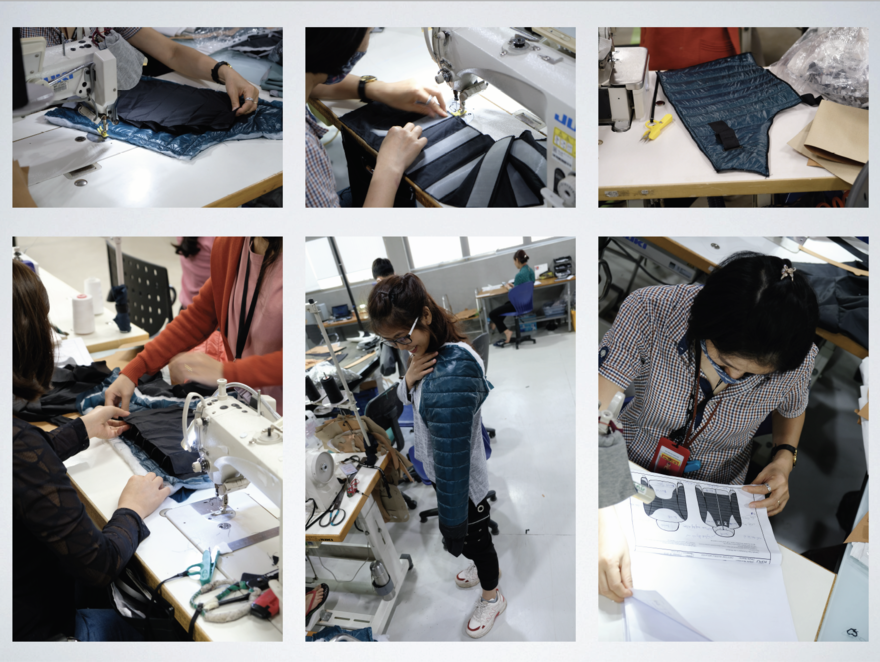 How do you create an upper body mid-layer garment that is able to adapt to a user's changing temperature and exertion levels?

The goal of this garment was to create an "invisible layer" that enables the user to alter the CLO-value of their upper body layering system without removing any garments. This design objective was met if the primary user, an intermediate to advanced level hobbyist, Alpine touring skier or splitboarder, aged 20 to 55, is able to thermoregulate effectively at different exertion levels without removing any layers. To achieve this goal, the garment must be able to increase or decrease its insulation value, breathe and regulate moisture effectively, and maintain the user's overall comfort. To this end, the design direction of the jacket was to: (1) create an innovative baffle system that allows the user to increase or decrease the loft of two front baffle panels regulating the thermal value of the jacket's core; (2) use adaptable ventilation to improve moisture management and convective cooling within the garment; and (3) use specific face fabric to increase durability in areas that interact with other elements like a backpack, gloves, and helmet while maintaining breathability. The proposed baffle system is inspired by window blinds which transition a 3D object to a 2D object when either side of the baffle is pulled in opposite directions. This allows the blinds to turn opaque or transparent allowing less, or more sunlight through the blinds.

Design conception for this garment revolved around the idea of using an expanding and compressible baffle system to regulate thermal resistance of the garment. Preliminary concepts and inspiration came from two specific areas. Window blinds were the initial inspiration for the compression system as they transition a 3D object to a 2D object when either side of the baffle is pulled in opposite directions. This allows the blinds to turn opaque or transparent allowing less, or more sunlight through the blinds. Conceptually, this created 'compression' when the baffle was in the closed position and released the compression when opened. The other area of inspiration came from Therm-a-rest "NeoAir" sleeping pads and other similar sleeping pads that use baffle technology to increase their insulative CLO-value. These sleeping pads use air to inflate and increase their thermal resistance. Their use of baffles creates air pockets that reflect infrared radiation back at the body creating a significantly warmer sleeping pad.

Initially, I wanted to use down insulation in a box baffle formation to create a standard loft, similar to any down insulated mid-layers on the market today. Then, by using specific tabs placed on the the front panel of the jacket, the two layers of the box baffle panels are pulled in opposite directions creating a compacting force, compressing the down, and reducing the insulation value of the garment. In theory, the compression of the down would remove the air trapped in the baffles and would effectively remove the insulation of the baffle. The only insulation remaining would be the natural thermal resistance of the face and lining material in addition to the thermal resistance of the compacted down.

There were multiple initial conceptual prototypes that were developed in an attempt to create the compression needed for the baffle system. With the initial concept baffles being filled with duck down, I needed to develop a way to seal the ends of the baffles while maintaining the ability to pull and compress them. An origami-style solution was developed that allowed for these parameters to be met, though the concept lacked production viability as the intricacy of the design would be extremely difficult to upscale.

After this realization, a modified baffle was developed to simplify the design. This design allowed for the compression of the baffles and easy sealing of the ends, sealing in the duck down. I also developed a method of construction that used only Bemis adhesive throughout the entirety of the baffle design, removing the need for any sewing. Moreover, the entire baffle system could be constructed with only two pieces of material: (1) the lining would be adhered in a way that would form the baffles while also creating a clean inner face; and (2) the face material would be adhered to the top using Bemis. The entire system could be hot and cold pressed as a single piece, reducing labour time and simplifying the sequence of construction. Several iterations of this design were developed to create enough compression within the baffles, to eliminate the stacking of the baffles once compressed, and to maintain even levels of insulation throughout the garment when the baffles became fully lofted. Unfortunately, it became evident that the duck down had significantly more lofting energy than initially predicted, causing the prototype to deform when compression was introduced to the baffles. In short, it became clear that it would not be possible to compress the down within the front baffles of the jacket with the current design without deforming the jacket elsewhere, which subsequently removes the compression of the down entirely, causing the garment to fit improperly. The jacket was not rigid or heavy enough to maintain shape and compress the baffles at the same time.

The next design was developed to remove insulating materials from the interior of the baffles, utilizing a user-controlled air gap to maintain thermal resistance. This design direction was pursued in order to negate the deforming effects that duck down had on the jacket when the baffles were compressed. A mesh-reinforced, collapsible-box baffle was developed with Primaloft insulation on the exterior of the baffle, and a lightweight woven nylon as the lining. This design allowed for the easy compression of the baffles, causing the quick elimination of the insulating air gap within the garment. The baffles did not need to be sealed on the ends as there was no insulation to keep inside, and the horizontal-supported baffling reduced the chimney and bellows effect within the garment that would normally be present with an air gap. This baffle design was found to be successful at lofting and de-lofting whenever needed, did not deform the garment when in a "compressed" or "lofted" state, and increased the thermal resistance of the front panel when the baffle was lofted.

There are specific features to the garment, not related to the baffle design, that are vital to its performance and are necessary in order to successfully respect the function hierarchy of thermal balance, moisture management, mobility, and ease of use. Thermal balance from the baffles is most significantly aided by the armpit zippers ("pit zips") with zipper guards. Pit zips are a crucial part of this garment's ability to manage moisture and thermal regulation. Pit zips allow the user to successfully rid themselves of excess heat if needed, increasing the air circulation of the garment and reducing the buildup of humidity and moisture in the jacket. These zippers work in conjunction with elastic cinch cords at the hem and the hood. These cords stop air from flowing freely in and out of the garment and allow the user to customize the fit. Nylon and elastane knit wrist-gators were also used to help prevent the movement of air and debris in and out of the cuff while also making it easier to don gloves or mittens.

Furthermore, there are various other features that are significant to the overall design but are not directly related to the design objective of the garment. For example: backpack-wear mapping was conducted in order to determine the high-rub areas of a ski backpack on a mid-layer jacket. Those areas were then transferred to a pattern and different materials were used in those locations to increase the durability on those rub points. The material chosen for these areas is almost twice as durable and only slightly less breathable than the rest of the garment.

An initial prototype was tested with the use of a hotplate and two thermistors. One thermistor was adhered to the outside of the inside lining of the baffle panel, then was subsequently placed face down onto the hot plate. The second thermistor was then adhered to the outside face fabric of the prototype with masking tape. The hotplate was then raised to 32°C to simulate average skin temperature. A measurement was taken from the inside and outside of the baffles using the thermistors incrementally to increase the temperature by 1°C . With every degree change, the temperature was allowed to stop fluctuating and then a measurement was taken with both thermistors. This continued until a temperature increase of the exterior was parallel to the temperature increased on the hot plate. This test was then repeated with the baffle in the lofted position. Using the ambient room temperature and the measurements taken for the comparison test, it was concluded that the CLO-value of the compressed (non-lofted) baffle was 1.39 and the CLO-value of the lofted baffle was 3.45.