Upbraid is a piece of critical design that aims to highlight practices of gender-coded, verbal silencing in the workplace.

Upbraid is an app that creates space for women's voices in the workplace by adjusting the verbally dominating behavior of male colleagues during meetings. Upbraid is intended as a tool that businesses implement at the corporate level and integrate into employee onboarding processes and performance reviews. Individuals set up a profile with a voice recognition sample and avatar that are linked to their corporate employee ID, email and phone number. Upbraid is used on the employee's smartphone since it is a ubiquitous and easy tool in most corporate workplaces. Once a session is created, each team member in attendance is prompted to "join" the digital meeting space. This step visually places the avatars of each team member into one screen environment.

Using voice recognition, the app tracks the talk time of different employees and visualizes the state of a conversation in real time by scaling up or shrinking the size of the avatars based on their talk time. If a male team member begins to dominate the talk time, his avatar will grow in size and become mean and villainous, visibly squashing the avatars of the others into the corners of the screen. If the behavior persists, Upbraid highlights the offender on the screen in red and sends warning "nudges" via text message reminding him to let others speak.

At the end of each session, Upbraid sends the team and managers a recap including each member's talk time, number of interruptions and decibel level. Upbraid also sends each member a letter grade for their participation in the session; offering critical feedback and suggestions for improvement going forward. If a male team member does not improve over time and chooses to ignore Upbraid's corrective suggestions, the platform adds consequences and begins withdrawing money from his paycheck. The funds are then redistributed to the female teammates he silenced. 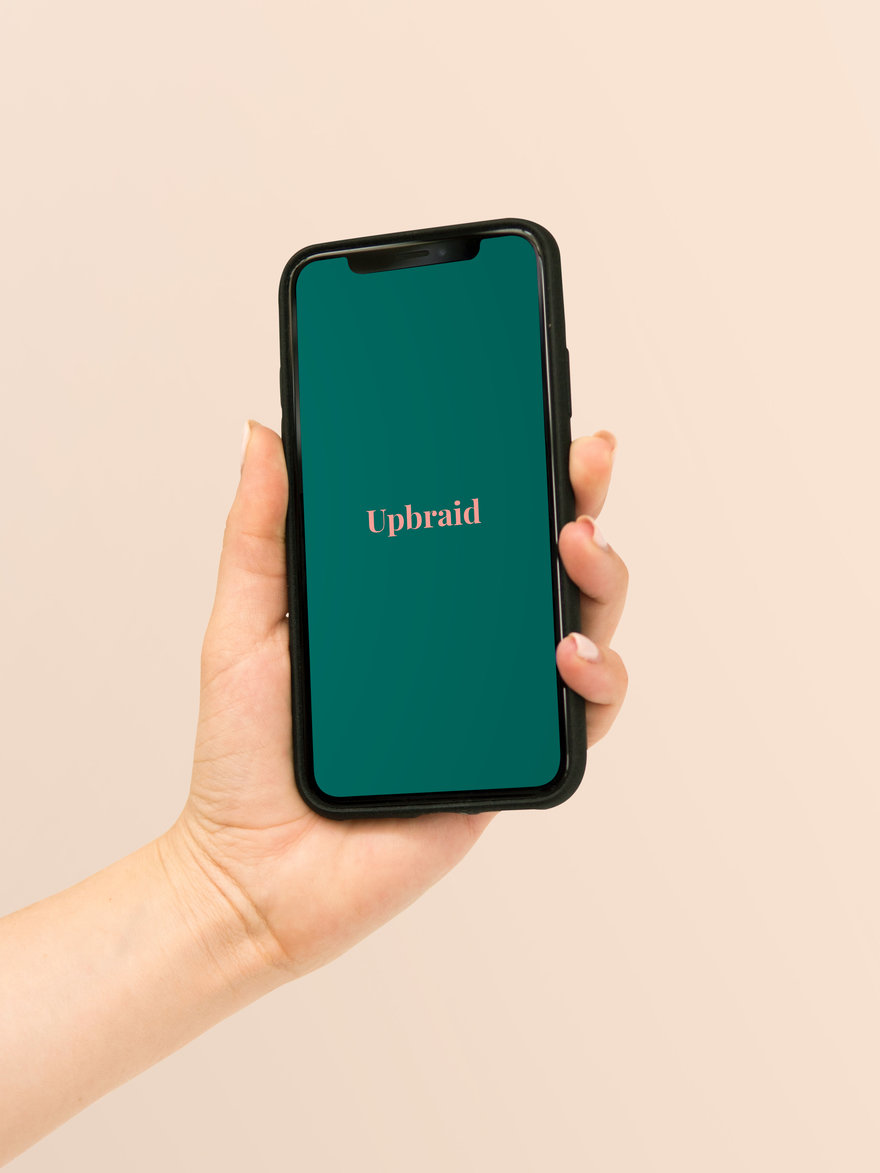 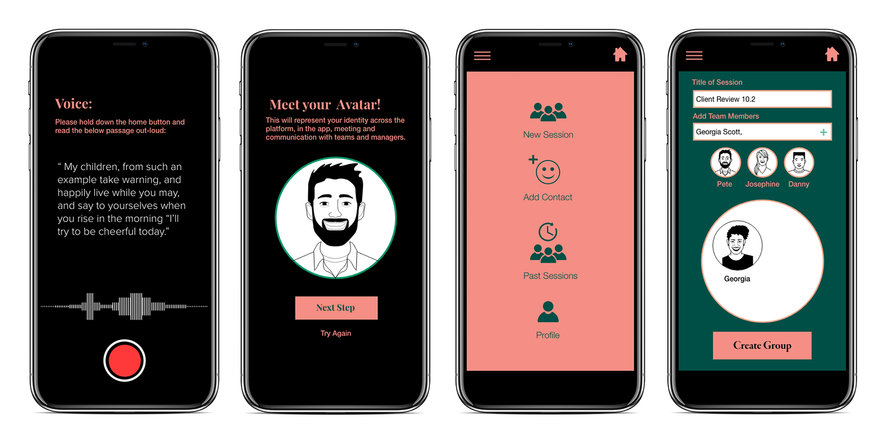 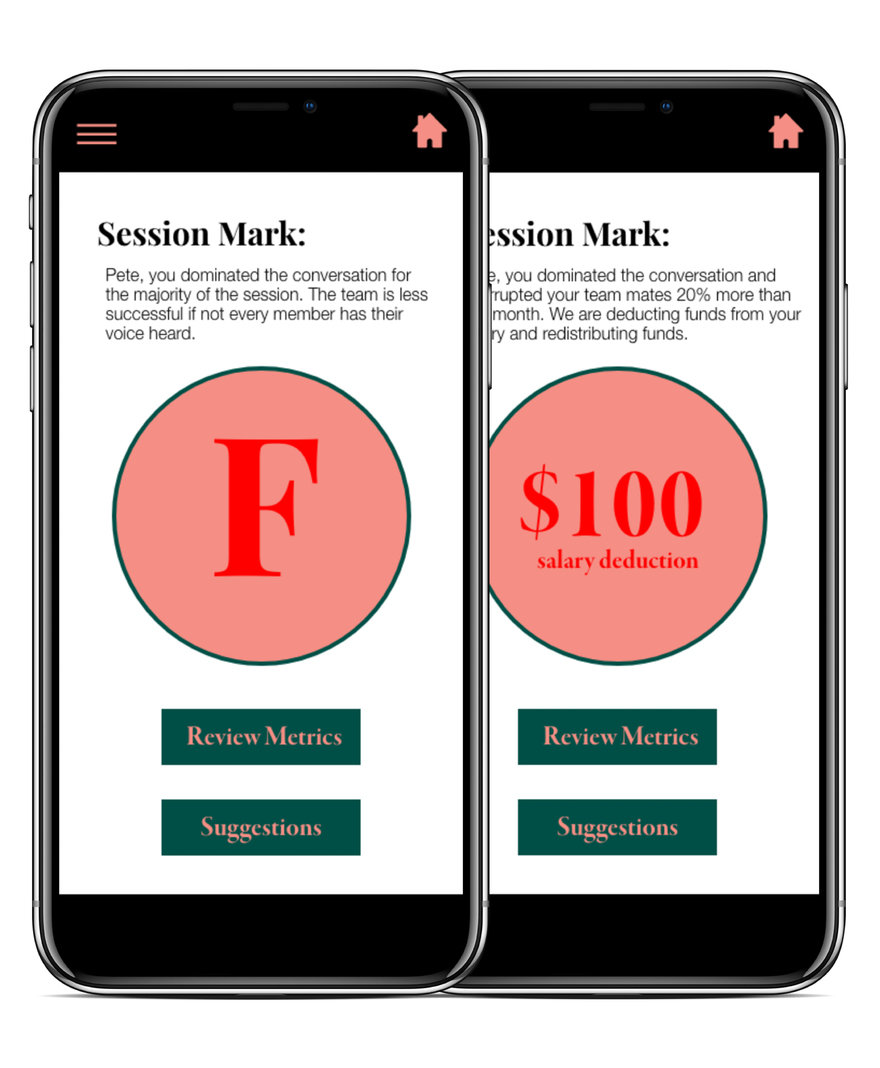 Upbraid is one project in a larger suite of projects designed as part of a thesis exploration into gender, voice and power. The duration of the project lasted two weeks. The aim with this work was to provoke conversations around the "mundane" or daily ways that women verbally experience misogyny and sexism.

I interviewed a variety of subject matter experts during my design research phase to gain insight into the state of gender, voice and power today. During these interviews women often mentioned the workplace as a space where gender power dynamics were most present and fraught in their lives, especially in male dominated fields. Meetings, work sessions and boardrooms continue to be challenging spaces for women to make their voice heard. When women want to be heard in the workplace they are told to "speak up," "be assertive," and "speak louder." These prompts are problematic because they perpetuate the qualities and values of traditionally masculine coded behaviors and characteristics. Rather than exploring how office culture can change to be inclusive of differences in how all genders communicate and participate in the office work space, these prompts problematically ask women to change how they might normally use voice in these spaces, placing the burden on change on them as opposed to the offending group.

A conversation with the COO of a leading design strategy company helped solidify the design opportunity space when she said, "It is understood that men in leadership are often 'aggressive' or the loudest person in the room. This translates to being the most passionate voice in the room when it's really just that, physically, your voice is louder than mine." In my secondary research I found overwhelming support for the argument that women do face significant physical and cultural barriers when it comes to being heard in the workplace.

Physically speaking, women generally speak at a higher pitch than men which means that they do not carry as far and can be harder to hear. Women also tend to have larger gaps at the back of their vocal cords, which allows for more air to pass through. This gives women's voices more of a "breathy" quality, which can make it harder to hear. The social and cultural barriers women face in being heard are perhaps the most challenging. C-suites and boardrooms are traditionally and historically considered male-coded spaces of dominance. Several women I interviewed called out "male entitlement" as a significant challenge in these spaces. One interviewee stated that she was always "fighting against male entitlement" and that men were accustomed to feeling and acting like they were the smartest ones in the room and disregarding the voices of others.

This challenge is compounded when you factor in internalized sexism and cognitive bias that has taught society to question women's intelligence and competency. A number of my interviewees mentioned that "male cluelessness" to the challenges women experience was another significant challenge and felt that men simply did not recognize when they were engaging in these silencing practices. Verbally, all of these symptoms manifest in such behaviors as men interrupting or talking over female colleagues, mansplaining and "hepeat."

I saw an opportunity to design a service that would make visible the verbal challenges that women in the workplace experience to callout men and demand that they address the ways that they knowingly or unknowingly silence women's voices. The service is designed in a way that is intentionally harsh as a means of provocation. If a male team begins to dominate the a meeting, his avatar turns red and becomes a villain to visualization how it feels to a woman in the moment she is being silenced.

The use of a financial consequence is employed as a means of adding heat and gravity to the situation. With Upbraid, the responsibility of corrective action and the consequences for failing to change are placed on men; a direct reversal of the current dynamics in office environments where women suffer the consequences of not acting more like their male colleagues. It is aimed to promote discussion about what the consequence should be, if any? What is the motivation for changing existing gender power dynamics? How do we engage men in this conversation in a way that does not try to protect their interests over women's interests? How far is too far and how far is not enough given the current state of gender inequality? How valuable is a woman's voice?

My goal was to create a design work that pushed against current power dynamics and while grappling with these larger questions. In this service, I am suggesting a reframing of values where women's voice and contributions would be prioritized and given value over the future earning potential and upward mobility of their male colleagues - because the work of being heard shouldn't fall solely on women.