Delhi is the capital of the what would be the most populated country in the world by 2024. What are the state of affairs in this rapidly urbanising country in which 40% of its population will move to urban areas for better standards of living by 2035?

The growing inequality in this atmosphere is a reality that cannot be ignored. In Delhi for instance, the marginalised section is an afterthought to all developmental efforts made by the government. The implications of this afterthought manifests itself into various intangible aspects of everyday life. "The existence of villages, known in policy and planning circles as 'urban villages', within the sprawling metropolis, is just one paradox" that has emerged. The questions of inequality of access, of economic opportunity, of stability are therefore raised. The reinforcement of this stratified society which presents itself through stark contrasts has become today's normality and is thus ignored.

The objective of the project is to create a provocation that would lead to a conversation about the state of affairs of a rapidly Urbanising India. It is to make stakeholders critically aware of the situation and its implications. As a student, the objective is to understand the nuances of creating such a critical visual narrative that invokes action in the Indian context.

The project started by understanding these urban villages and conducted an ethnographic study in one such urban village. The insights were then extrapolated to build a future world. The future scenarios within this world was created from intersection of future trajectories of rapid urbanisation, socio-economic inequality and climate change. These scenarios have been imagined in various ways and illustrated through collages, short-stories and a film. These articulations are diegetic prototypes from the future and aim to provoke various stakeholders.

These were made with the help of various scenario-building tools that were also designed in the process. 'The Change Map' is a tool that is designed to help map changing contexts and contributing factors of these changes and transitions to build desirable future trajectories. The 'Beam Futures Diagram' is another tool that allows one to imagine contextual Indian and possibly subaltern futures.

Questions that this project has posed. 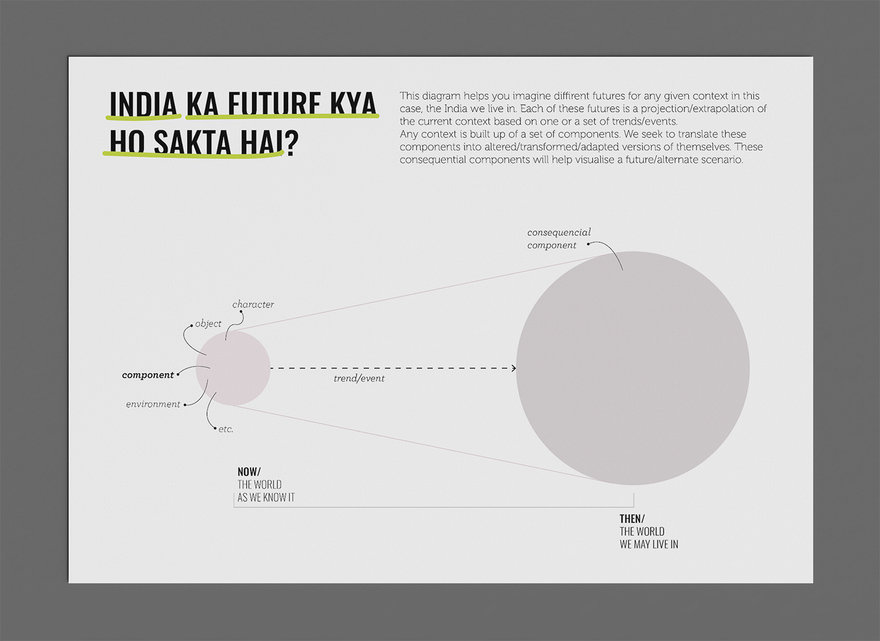 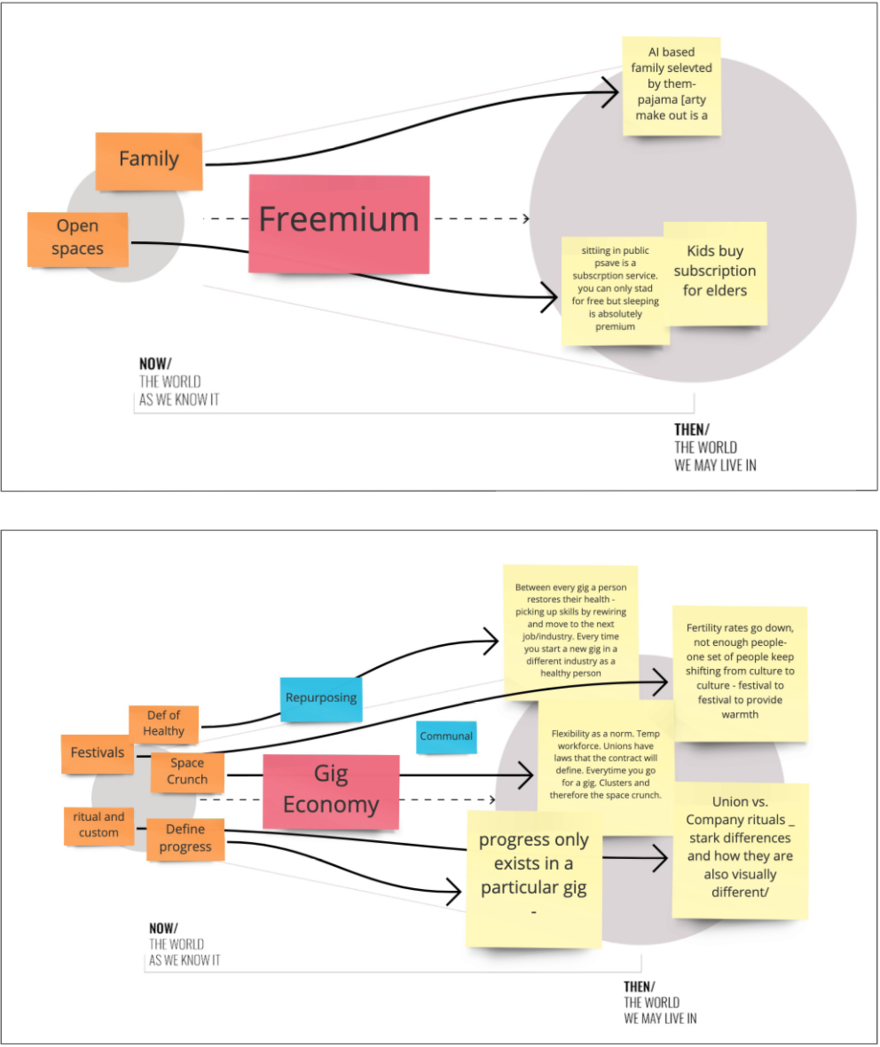 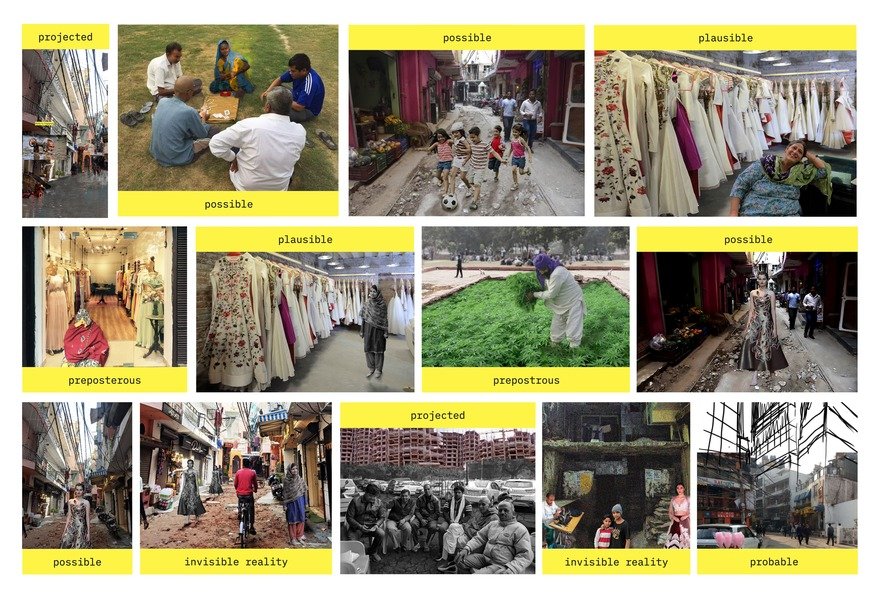 3. Collage Narratives. From possible to plausible futures. To even hidden and alternate realities. 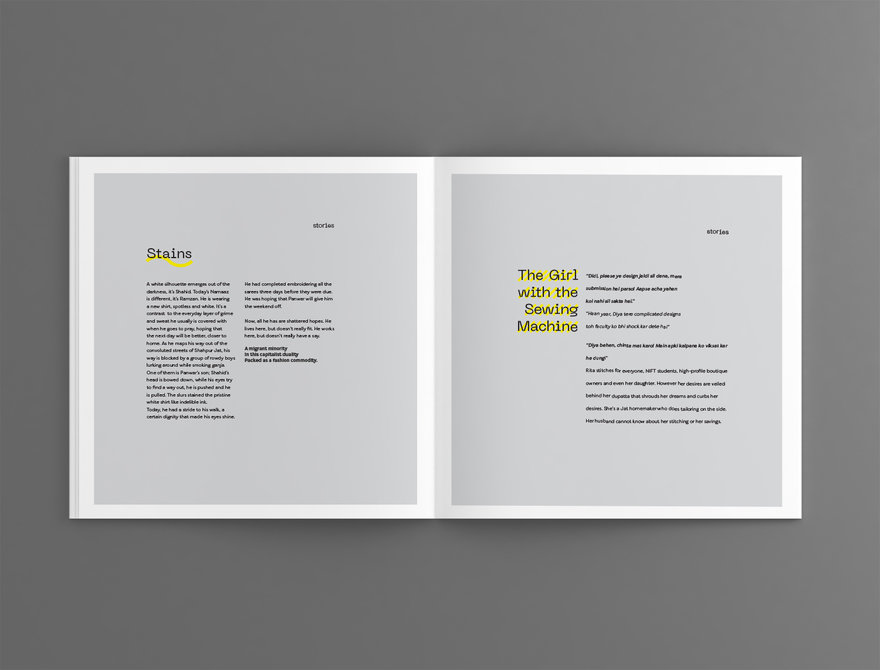 4. A Reject Short-Story Book. A spread from the said book.

3. Collage-Narratives. A transforming scenario from the present to different futures.

5. A snippet from the film

Urban villages are urban settlements in transition. This transition has acquired a permanent character of complacent normalcy. This phenomenon has been observed time and again in many rapidly urbanising areas.

In academia, the ill-effects of such transitions are articulated very efficiently. The mainstream lacks this understanding of the social and cultural costs involved in such changes.

Can we break this normalcy through provocation and/or exaggeration? Shahpur Jat is only one such urban village. Delhi alone has 125 such urban villages. 227 villages classified as rural. Soon to be engulfed by the influx that will make Delhi the most populous city in the whole wide world.

Will the to-be urban-villages in transition face the brunt of marginalised development? With these questions, I enter my inquiry through design.

"Charting a path of development that is sensitive to the population's diverse socio-economic landscape is a very different challenge." Treemouse on Shahpur Jat (Delhi) - a settlement that poses to be at the periphery of infrastructural development.

An ethnographic field study was conducted here, over a period of two months to understand the settlement and the inter-social relationships in Shahpur Jat.

Shahpur Jat is the glamorous 'Fashion Hub' of Delhi, however it also imbibes within itself sweatshops, factories and a history of marginalisation of the people who reside there. There are various socio-economic classes that co-exist, the original inhabitants of the village who have the monopoly over land ownership, the tenants who own boutiques, design studios and restaurants and the migrants, who work in garment factories and contribute to various other businesses. The over all gentrification of the urban village, brings social distancing and alienation based on class and social grouping.

The insights and new knowledge built from this study helped in creating a nuanced narrative that could potentially be provocative. The ethnography thereby became the grounding force of the proposed narrative/s.

An exercise in Extrapolation/Exaggeration of the insights from the research was conducted to provoke the viewer and alter their perspective in order to make them question the system of template development and its effect on people & society.

The participant is provided with a diagram that has the current world that visually magnifies into the future world. The task is to pick things that exist in today's world from a list compiled from the key words extracted from the study, pick corresponding trends/phenomenons/trajectories from another list and imagine what would the future of that thing be if it is affected by that trend. These were further nuanced by 'Indian Moods' a compilation of all things Indian to suspend these imaginings from shiny techno-western futures.

Example : Shortage of Space + Climate Change -> Community Breathing Rooms for all in every neighbourhood.

It is a method and tool that I developed to map contexts over time. This aims at bringing out patterns of change that affect any place. I mapped Shahpur Jat and deconstructed it into various 'components'. In this process, I also traced the past, present and future of these 'components'. Global, national and local factors that may affect 'components' are also mapped to understand what causes a shift or change in its existing form or discourse.

Example : In the past the Shahpur Jat had a 'rural' (component) status after the Delhi Master Plan (local factor) it became 'urban' (consequent component)

Thus by engaging in imagining possible futures and alternative nows, we engage in a futures' research. They have been illustrated through :

My attempt at what might be termed as photomontage was thus to draw upon not only the ability of the technique to juxtapose imagery but also the historical context it provides from a cry of protest, of descent to that of discourse. I have tried to imagine different future scenarios from plausible to possible, even preposterous to an alternate reality in these collages.

4. A Reject Short-Story Book
Narratives as a form are the core of human communication. We speak of anecdotes in each other's lives. It's one of the basic ways in which we as humans comprehend the world, it makes understanding simpler. Complex systems at play have the ability to mask all their convoluted interminglings in seemingly simple words. This is my attempt at this art form to build fictitious future stories through a design process!

Key words were extracted from the understanding and field research done at Shapur Jat. These included recurring spoken words, themes that emerged and the perceived understanding gained. These words were listed in a word bank and grouped together in combinations to form stories.

An excerpt from a story called 'Stains' which talks about "A migrant minority, In this capitalist duality, Packed as a fashion commodity." and how in his vocation is the definition of his position in society and how even while wearing a pristine white shirt he feels the stains of his social condition.

A scenario in which an Indo-China partnership exists is imagined. Newspaper as a medium, is frugal and fits the Indian context in a way no smart device can. If our world exists in the future, so shall our news. And it must, therefore, be extrapolated in form as well as format. Hence, an interactive newspaper that is bendable and updates in realtime was imagined. Combining electrophoretic ink technology and non-tearable paper as a material.

This news platform 'The Ping' re-imagines news as any notification. The content of the platform has been drawn from the future scenario of Shahpur Jat. From the mundane weather to the climate changes - this e-newspaper provokes the user through its interaction and copy. Even a potential date is news!

These are the various outcomes that the project has had. One of the most important insights that came through this project is:

A country as diverse as India, which has multitudes of vulnerable communities, as a speculative/critical designer it is important to remember a few things.

When we as designers engage in the business of imagining and re-imagining futures even if it has been informed by research - it is important to understand the implications of this scope of work.

When I engaged with the community at Shahpur Jat, I was cautioned against adopting methods that seem to be the textbook path to sign off of any spec-project. These methods essentially pointed at taking back work to the community, however it was decided that this is not going to be the path, at least at such a nascent stage of the project.

Communities are sensitive and not knowing enough can sometimes be a reason to hold back until you know for sure. Of course the case of co-created futures and speculations are different. Hence, one must check and re-check oneself and one's process at each step.