SELFORG, a speculative scenario for a softer world

According to the Japan Meteorological Agency, in the past century, average temperatures in Tokyo have increased by 3.2°C. Urbanisation is reportedly a major factor behind this 'heat island' phenomenon, but severe damage to ecosystems resulting from sudden climate change has become a global problem. Together with TEIJIN, world-renowned fibre manufacturer, we explored the potential of fibre in such a future.

The scenario takes place in a future society where the 'heat island' phenomenon has developed further, with sea levels rising globally. With the receding coastlines, many of the waterside metropolises around the world sees its population moving inland, causing a construction rush. Concurrently, the rising temperature nudges people to move their core times to evening hours.

In this future, through biomimetic engineering, fibre technology has widened its role in society, offering different functions to enhance our everyday lives. SELFORG is one of such products that originate from self-organisational phenomena seen in nature. What if we could create synthetic fibres, in a similar way to how we grow plants?

Under this concept of 'fibre seeds', we developed a series of scenarios in which such technology might thrive. What if we could grow adhesive fibres for glueing things? What if fibres could grow into garments? What if we could apply self-healing fibres to roads and other infrastructures so that they can self-sustain?

From all of these scenarios, we dream of the rise of a softer world, in which fibres replace metal and concrete, allowing for a safer and more sustainable society. 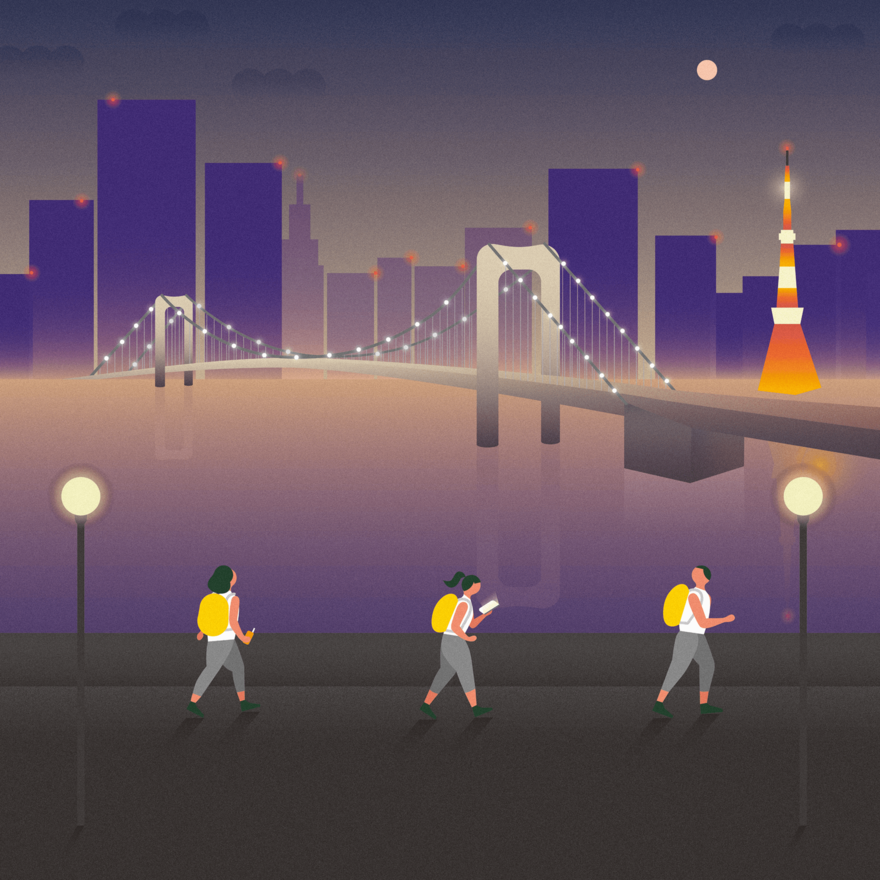 Children commuting to school by the coast 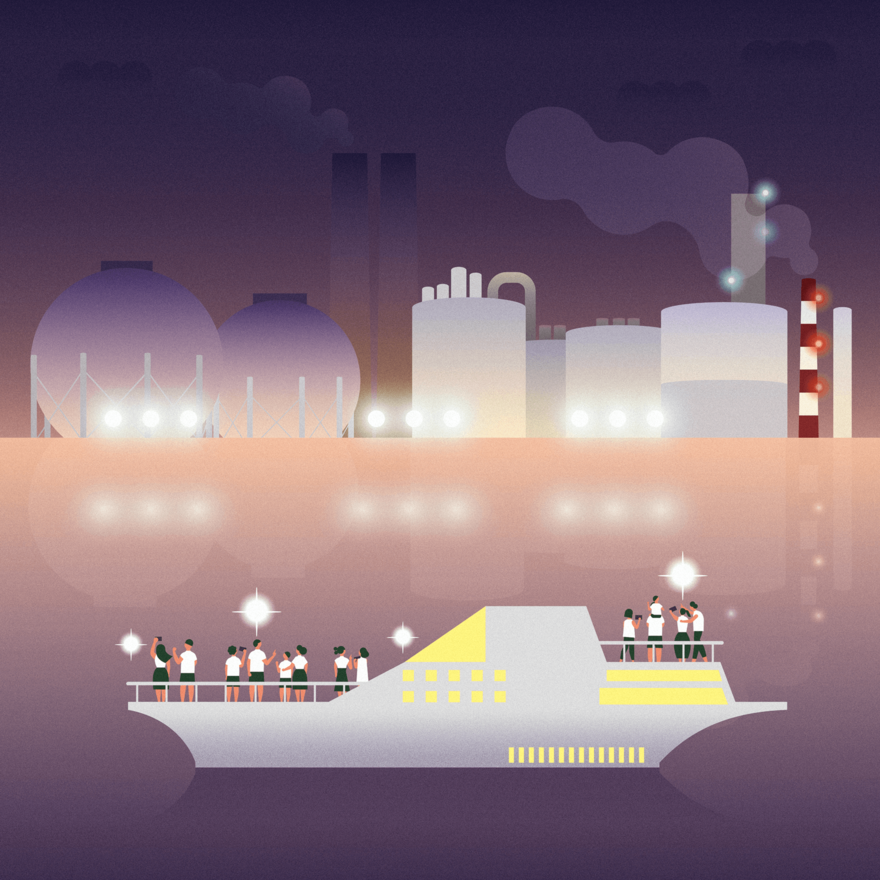 Previously coastal industrial area, now under the sea, is a popular tourist spot 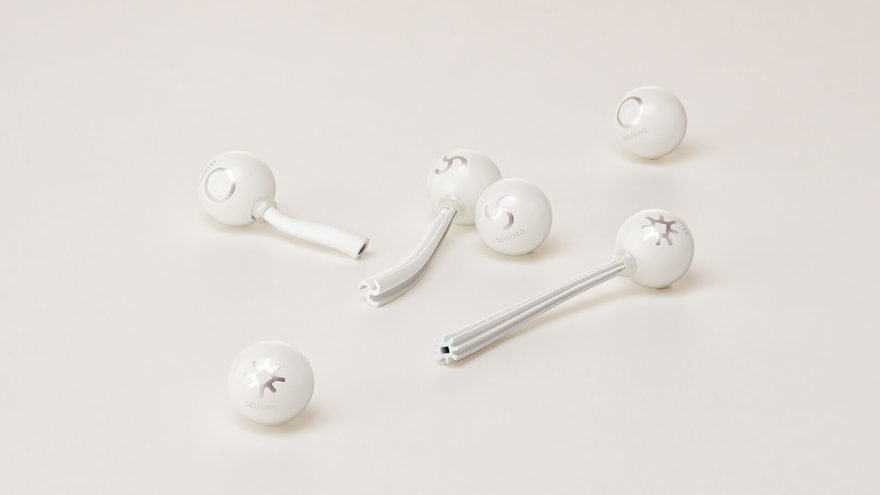 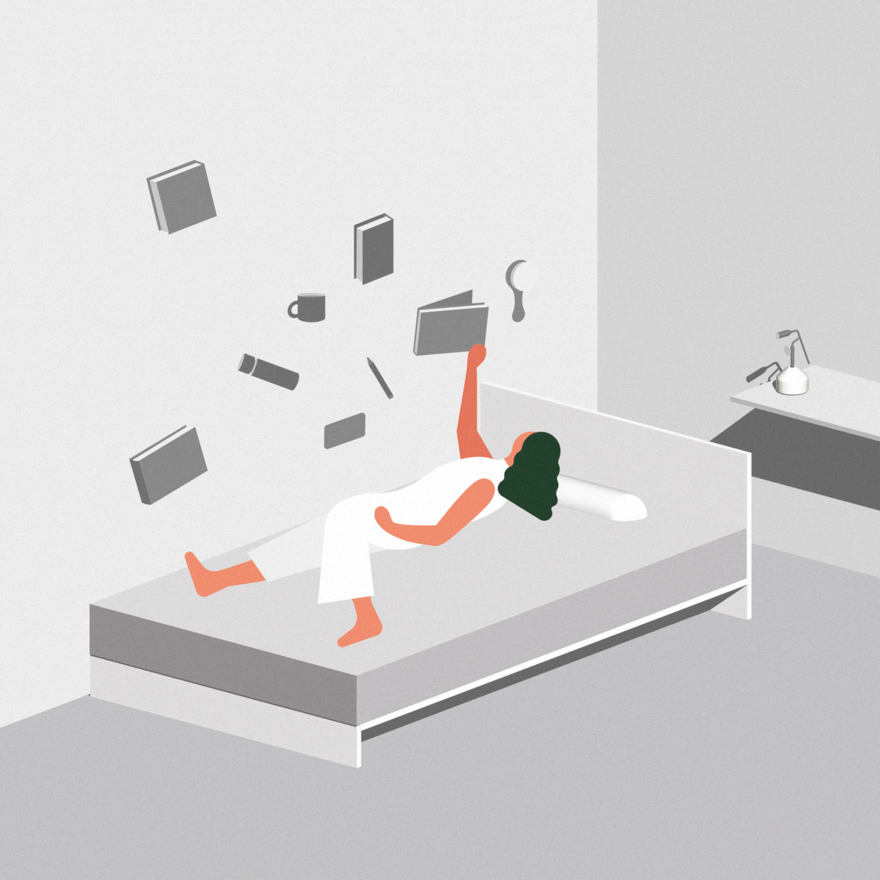 Gecko Spray put to use 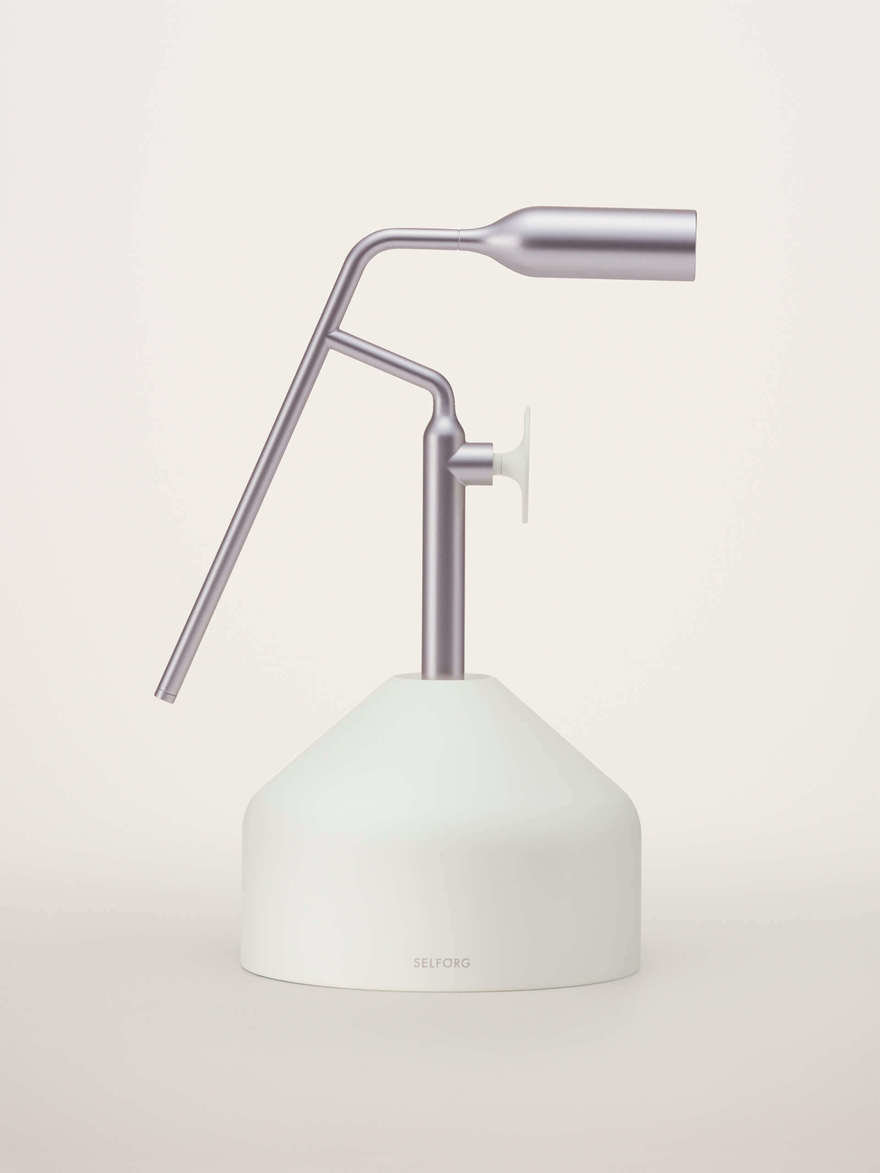 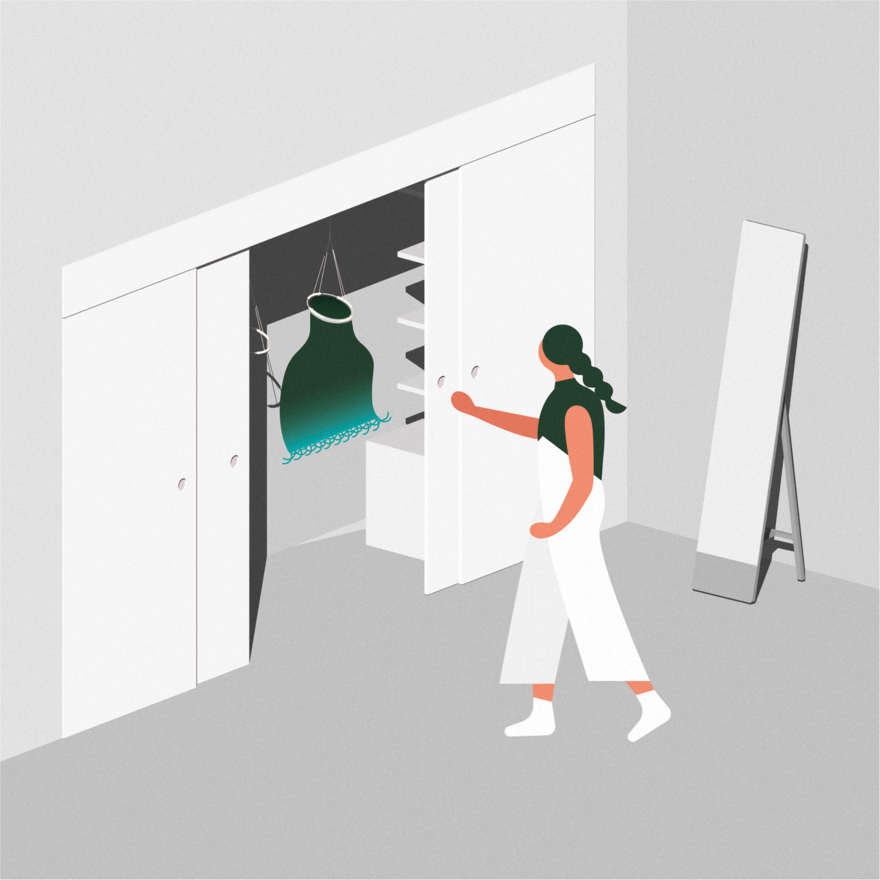 Wear ring inside the closet 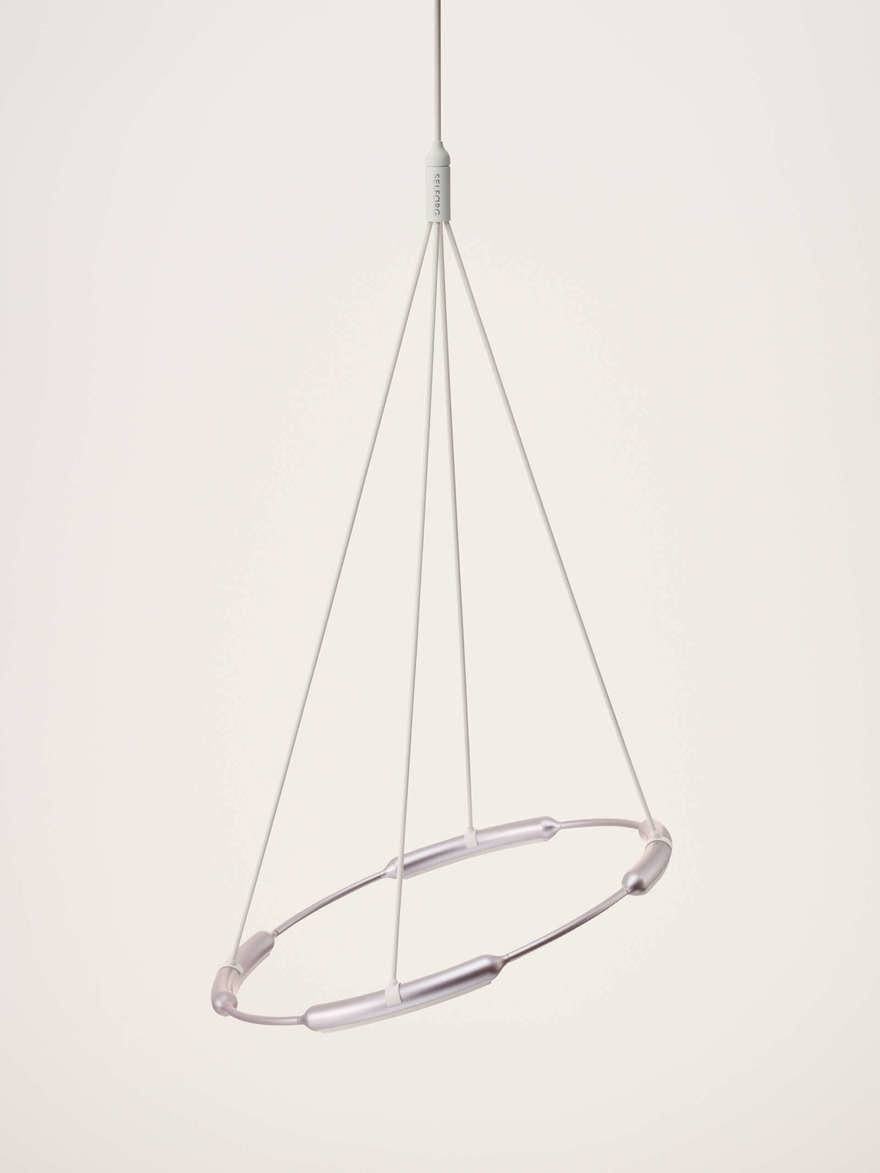 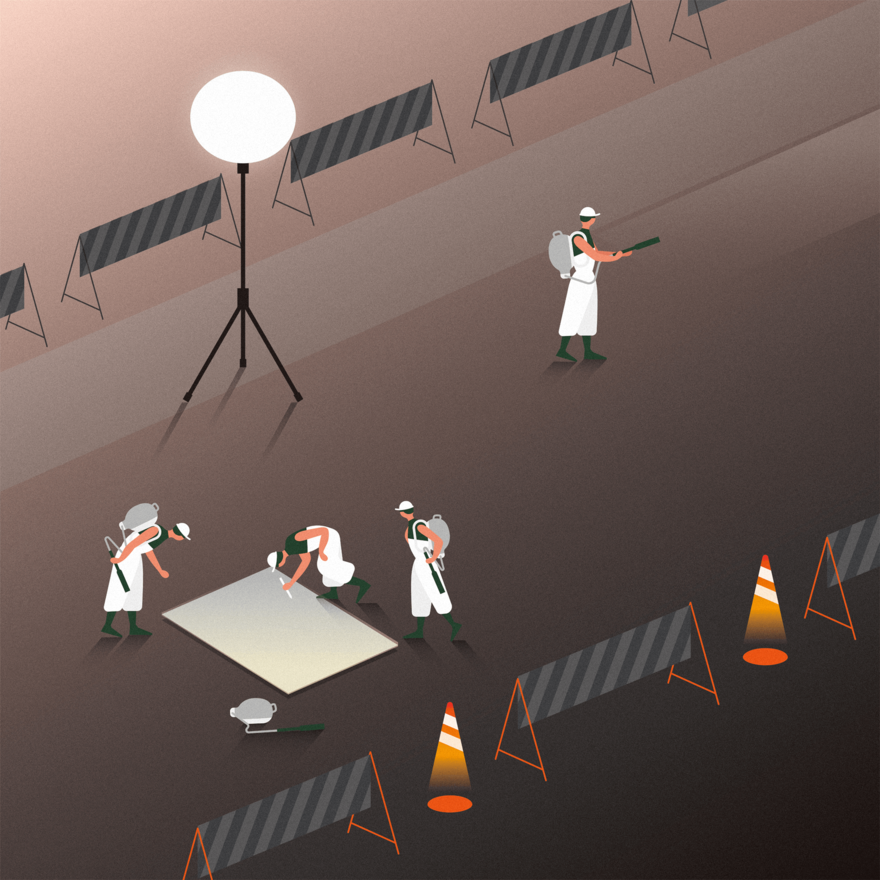 Application of SELFORG to roads for a soft coating 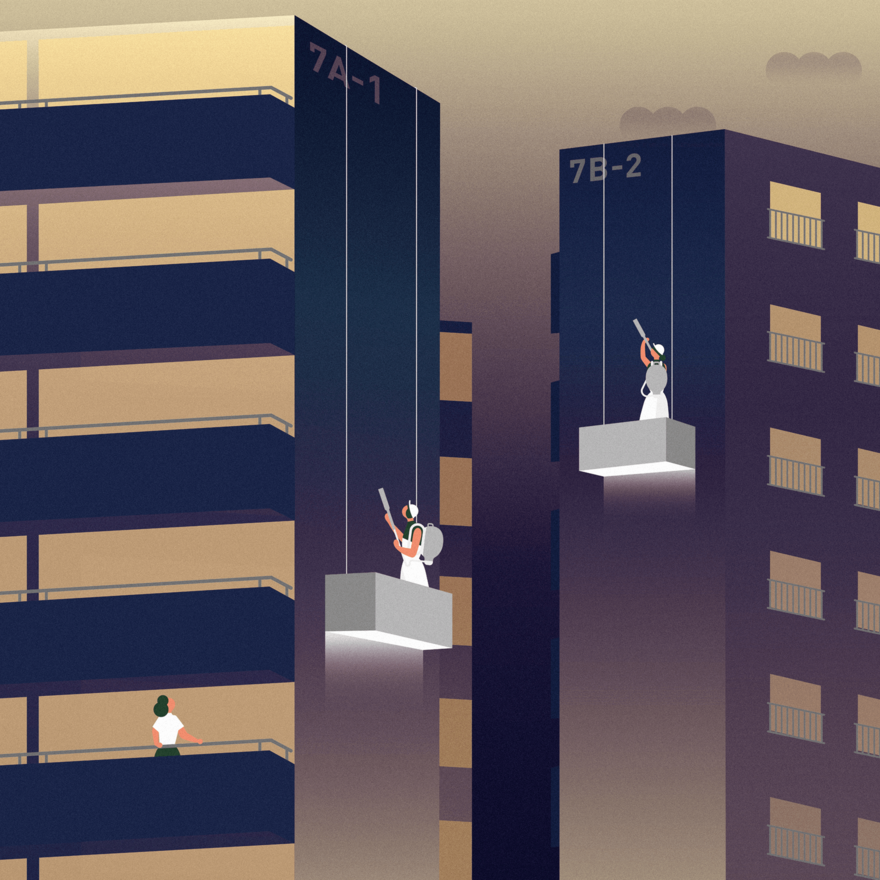 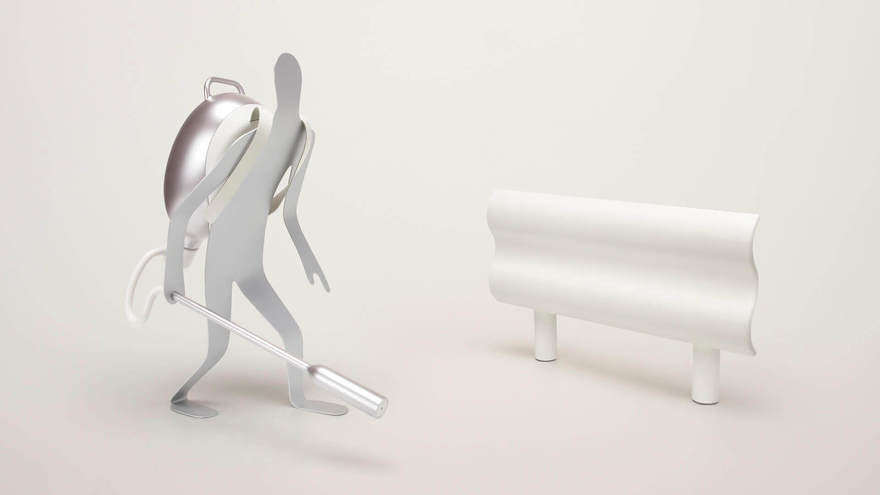 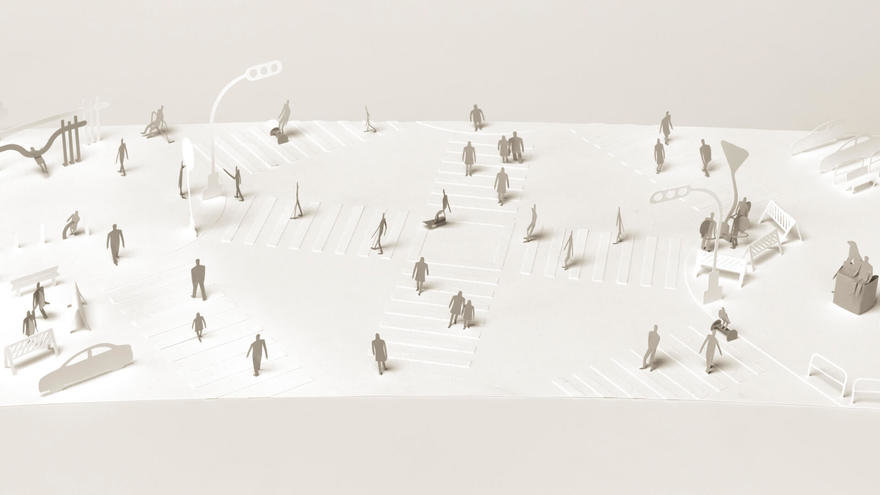 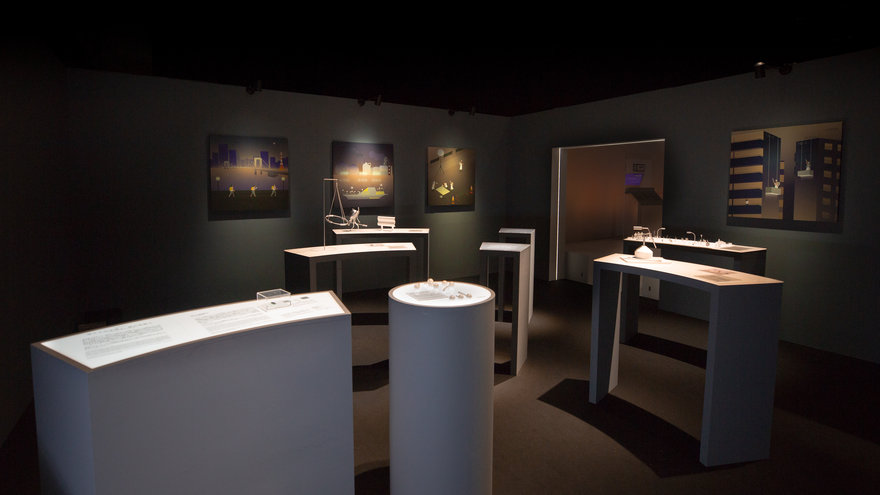 The scenario takes place in a future society where the environment has changed due to global warming. In this future, through biomimetic engineering, fibre technology has widened its role in society, offering different functions to enhance our everyday lives. Through engaging story and illustration, we introduced the concept and products that might emerge.

Chapter 1: At night, by the approaching sea

In the late 21st century, due to rising sea levels, we frequently saw our shores disappear. With the receding coastlines, many of the waterside metropolises around the world saw its population moving inland, causing a construction rush.

Concurrently, the rising temperature nudges people to move their core times to evening hours. While people start to increasingly enjoy both their work and play during the evenings, the philosophy of "Biomimetics" catches public attention.

"Biomimetics" is a way of thinking that argues that we should learn from nature and mimic its behaviours. People experimented with using technology to imitate systems and functions found within nature. By the mid-21st century, this resulted in the successful replication of the phenomenon of self-organisation, using chemical synthesis technology.

Chapter 3: SELFORG - a seed for fibre

One of the technologies developed based on the philosophy of self-organisation is SELFORG. Under certain conditions, this technology transforms tiny particles into synthetic fibre that looks as if it has grown out of a seed, the origin of its nickname – 'a fibre seed'. The materiality and characteristics of the growing fibre are chemically designed. However, the amount of growth and the strength of those characteristics are influenced also by its planted environment.

On the surface of SELFORG, the type of fibre that grows out is graphically printed, making it identifiable when observed by a microscope. The graphic is made based on the cross-section of the fibre, which strongly affects its functionality.

Chapter 4: Sow it yourself

Many of the materials that adopted SELFORG dropped in price since they were mass manufactured for urban infrastructure work, making them available for consumers too. Fibres that have the ability to extend to adapt to where they are sowed are used as glue or filler. Others that are water-repellent, oil-repellent or have structural colouration are perfect for adding new functionality to objects and are used by many people for DIY purposes.

Through SELFORG, people familiarised with the act of sowing to add functionality or to make things, giving birth to the culture of SIY (Sow It Yourself), an alternative DIY culture using SELFORG.

A spray-shaped device that is used in general households. Inside the device is a SELFORG that creates fibres with molecular structure equivalent to that of a gecko's limbs. When sprayed, it stretches into thin fibres with adhesiveness, perfect for storing and attaching daily necessities to walls or ceiling.

A ring-shaped device with a porous structure into which SELFORG can be inserted – the seeds start extending its fibres from the holes once they have been sown.

The SELFORG used for Wear Ring is designed to form a garment when grown and this creates a culture of self-making garments at home. It is creates garments that fit the wearer's figure exactly.

Chapter 5: Towards a softer world

From the point of durability and efficiency, hard materials have been used for urban infrastructure. Due to advancements to SELFORG technology, fibre materials with self-healing functionalities were developed. The fact that their softness decreases damage from accidents and that the soft aesthetic gives a user-friendly impression made it favourable for urban infrastructure use.

For roadworks and construction sites, industrial sowing equipment is used. The sowing can be done directly to existing structures, allowing its soft coating to be grown on roads, traffic lights and barriers. They are used not only for repair and reinforcement but also for adding new surface properties or functionalities.

In previous urban environments, roads were covered by hard asphalt and traffic lights and barriers made from hard metal were arranged along the road, but with SELFORG, these materials are being rethought, replaced by soft and elastic materials.

This is due to the increase in accidents caused by the transition of people's daily lives to evenings. These urban planning methods and philosophies eventually became mainstream, increasing the opportunity in which SELFORG material is used to cover different structures around the city.

We exhibited SELFORG at 'THE NEXT 100 THINK HUMAN EXHIBITION', which took place in Shibuya Hikarie, along with other exhibits that showed other alternative futures centred around topics such as food or pharmaceutical, an area that is also covered by TEIJIN group.