Botanical bodies investigates the possibility to use plants as a raw material for the creation of human compatible organs. Vegetal and human tissues share microscopic similarities making hybridation between those two kingdoms, which are usually seen as separated, a possibility.

What if the physical body could progressively merge with the vegetal world? What happens if we consider our body not as an independent set of organ, but as an organism constantly evolving toward a symbiosis with plants?

Bringing recent scientific research to a speculative level, this project investigates new ways to use the shaping powers of nature, thanks to which a poplar tree can be modified to the point of replacing an actual human bone.

From the extraction of the bespoke bones from the transplantation, boundaries between disconnected organisms fade away toward a new synergy. 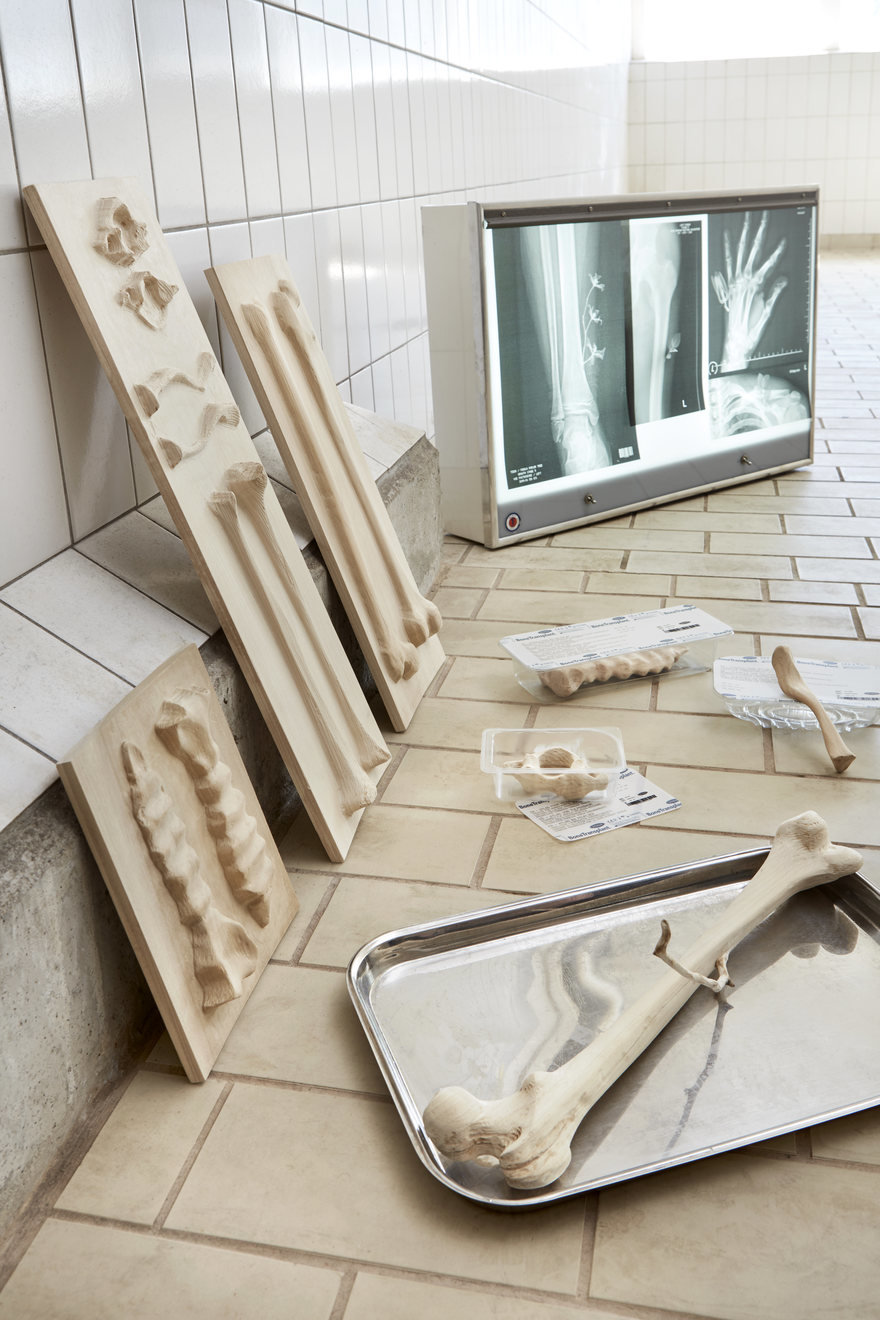 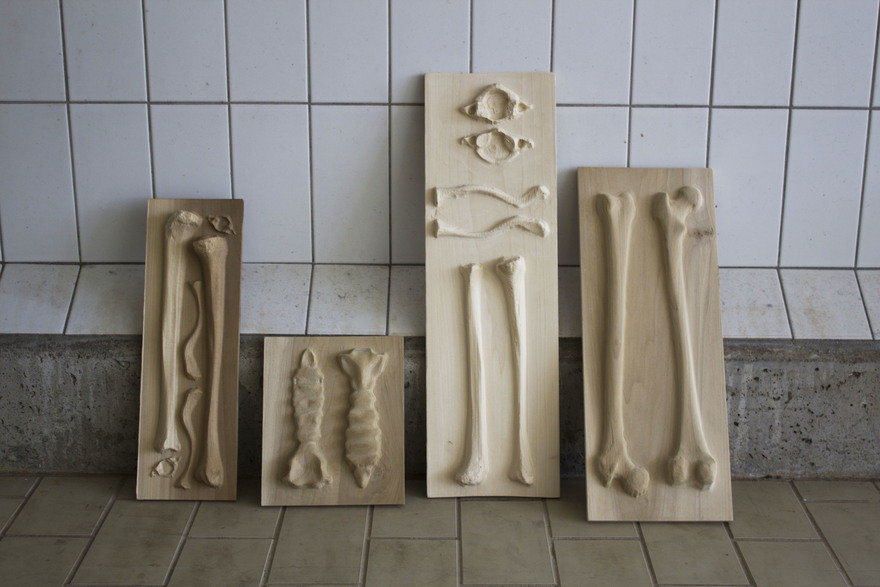 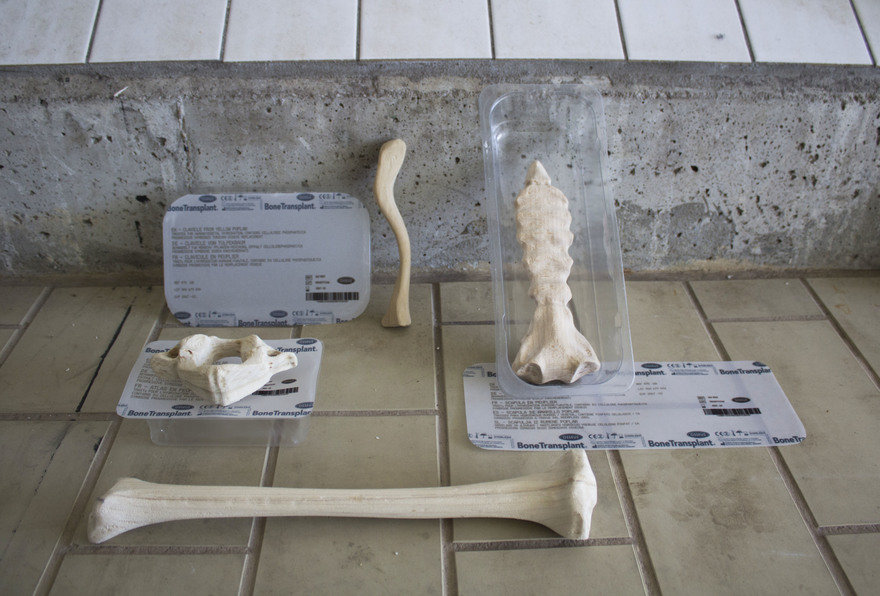 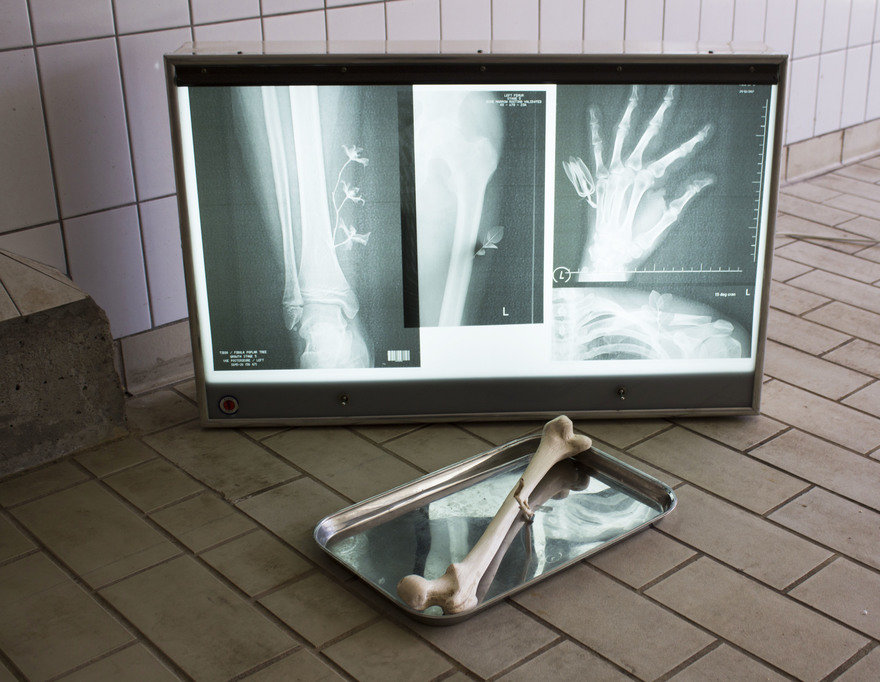 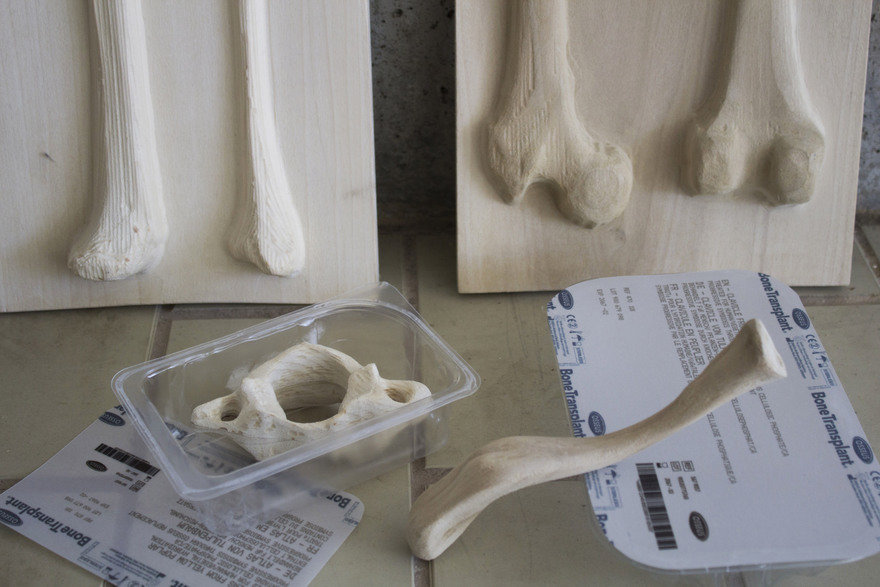 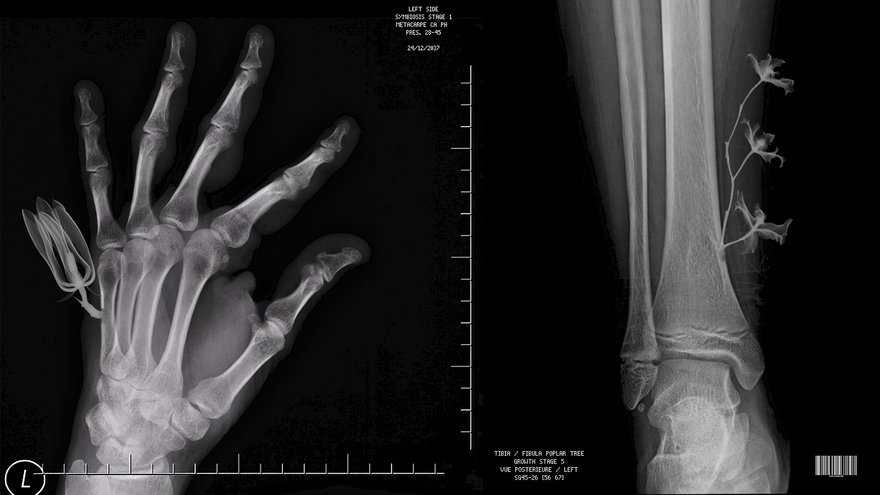 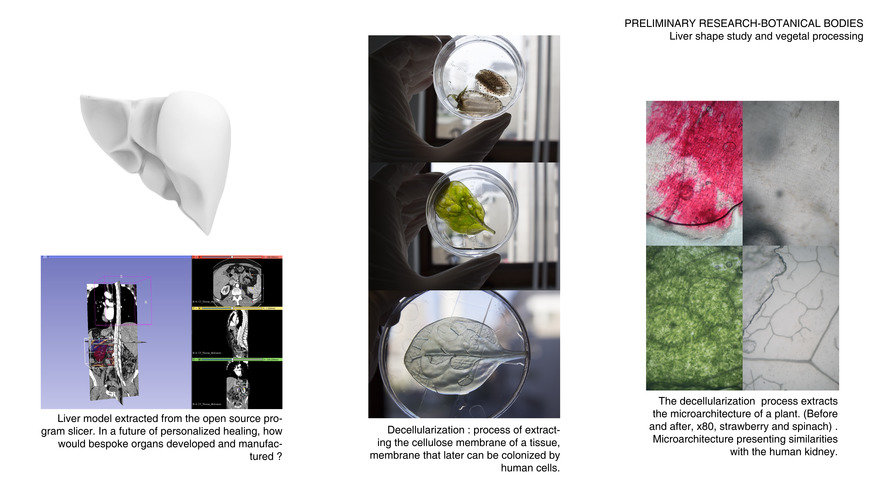 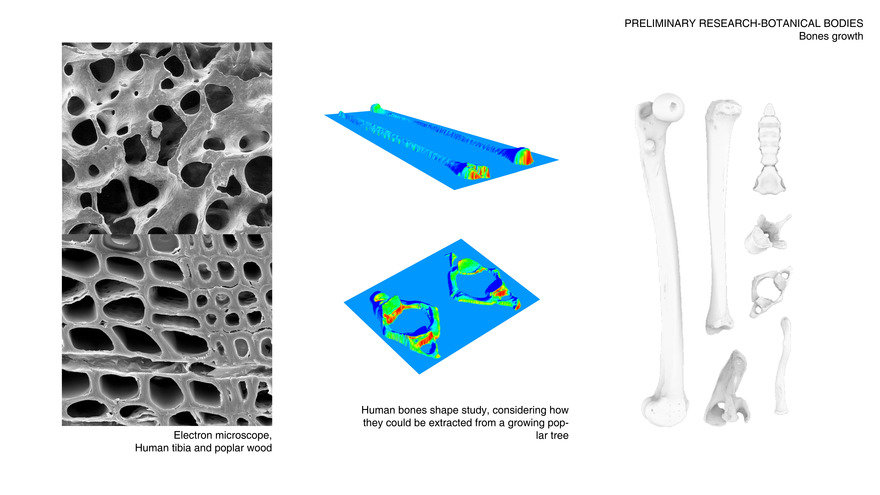 Botanical Bodies is a speculative design scenario that investigates the possibility of using plants as a raw material for the creation of human-compatible organs. Scientific progress in understanding complex living organisms has made it possible to engineer life, and the hybridization of species has become a designed process. This project explores how plant-human hybridization might become a necessity for preserving ecosystems endangered by human activity.

Using bones and wood as a case study for this possible blend, Botanical Bodies looks at the implications of human symbiosis with the vegetal kingdom. Through extracting a wooden bone from a living tree and implanting it into the human body, this work imagines how the distinctions between humans and plants, crowds and forests, bone and wood may fade away towards a new synergy.

Whereas the post-human is usually imagined as a blend of the organic and the digital, human and technology, the possibility for humans to merge with vegetal life is becoming a reality in today's scientific landscape. What if the human of the future becomes more plant than robot, more connected with the environment rather than taking advantage of it, more prone to merging with other life forms rather than seeking to stand out?

Using digital and mechanical prosthesis to repair damaged organs, enhance skills, and acquire new properties is something dominant in current narratives of human improvement. Whilst this direction is slowly becoming a reality (i.e chip implantation, mechanical hearts), other possibilities to enhance the human body are being researched.

Progress in the field of synthetic biology (design and construction of new biological entities) makes it possible to imagine new ways of modifying the human body. Previously overlooked organisms, ranging from bacteria to plants, can now be engineered to gain new functions and serve designed purposes.

"Previously overlooked organisms, ranging from bacteria to plants, can now be engineered to gain new functions and serve designed purposes."

The similarities in structure between human organs and plants has become a focus for scientists around the world. For example, one study has combined cardiac tissue and spinach (using decellularized plants as perfusable tissue engineering scaffolds, 2017, Gershlak-Hernandez-Fontana, Worcester Polytechnic Institute), and another has explored using rattan wood for bone growth (From Wood to bone: multi-step process to convert wood hierarchical structures into scaffolds for bone tissue engineering, 2009, Tempieri-Srio-Ruffini-Celloti-Lesci-Roveri).

While scientists are working with very precise questions and with microscopic but functioning samples, speculating about the possibility of modifying the human body with vegetal matter raises all kinds of questions concerning the ways we relate to our bodies, the environment, and what it means to be human.

My decision to focus on using bones as a site for human-vegetal merging is inspired by their characteristics: they are a structure crucial for our mobility, they are the slowest renewing organs of the human body (taking up to 10 years), and are closely tied to the human immune system. We attribute much importance to our bones; what happens when this importance becomes linked to other life forms?

"We attribute much importance to our bones; what happens when this importance becomes linked to other life forms?"

We are all intimately familiar with our bones in terms of their shape, the movements they allow, the structure they create, however, we don't visually see them as a material in the way we interact with our skin, for example. Given that they remain unseen, wooden bones have similarities to human bones in terms of their texture, warmth and weight. Although metal is traditionally used to repair bones, it always acts as a support rather than seamlessly blending into the body. Wood as an organic matter seems more likely to be accepted by the body as it can merge with existing tissues.

The separation of species

What changes if we consider wood not as an unchangeable material but as an organic, evolving, growing matter extracted from a tree that can support and grow within the human body? We can then enter another perspective: the possibility of becoming a chimera with a plant.

As anthropologist Anna Lauwenhaupt has written, hybrids between species have historically been perceived as an aberration :

"Enlightenment Europe...tried to banish monsters. Monsters were identified with the irrational and the archaic. Category-crossing beings were abhorrent to Enlightenment ways of ordering the world. Later on, rationalization meant individualization, the creation of distinct and alienated individuals, human and non-human."

Individualizing our bodies from our environment has created a separation between living beings, where to be human is to demonstrate difference, where taking advantage of other species rather than collaborating with them has become the norm. Therefore, we continue to see trees as a means for the production of wood for heating, shelter, cooking. Conventional uses of wood have become so ingrained that it is difficult to imagine another relation with it.

However, it is interesting to consider how the perceived autonomy of the human body can be easily challenged. For example, there are more foreign cells in the human body (microbes) than human cells, yet I still call myself a human. Moreover, wood and bones share very similar structures on a microscopic level (in terms of mechanical strength, size and structure), making the engineering of wooden bones far from being pure speculation.

"The perceived autonomy of the human body can be easily challenged."

"The imagined autonomy of the individual was tied to the autonomy of the species. Each species was thought to rise or fall on its own merits, that is, through the fitness of the individuals it produced. […] Today the autonomy of all these units has come under question […] We can't segregate our species nor claim distinctive status - as a body, a genome, or an immune system. And what if evolution selects for relations among species rather than "individuals"?"

If we understand ourselves as relative to other beings, alternatively we can perceive ourselves as part of a broad, interconnected network of living things, rather than as individuals defined by our seemingly unique characteristics. So, could we engage in a new relationship with the vegetal world by merging with it?

Why would such a hybridization the way I depict it (transplantation after transplantation, slowly merging into the vegetal world and becoming a new kind of chimera, a blend of tree and human tissues) be desirable?

And how do we reach a level of symbiosis, where all organisms involved gain something from this interaction? From a human perspective, there is a lot we could gain from becoming a bit more plant. On top of being able to replace our bones with organic matter that can be easily cultivated, the possibility to access plant awareness is tempting - we are learning more and more about how trees perceive their environment, how they can communicate with their peers and other species, how they feel pain, and respond to danger.

This broadening of human perception could be a gateway for connecting with all kinds of other species and perspectives, towards readjusting our relations in ecosystems currently endangered by a long history of damaging, anthropocentric activity. As for plants, what would they have to gain if humans felt more like them? Even though we are unable to perceive their needs from our limited perspective, we may be able to interact and exist with vegetal life in profound new ways.

If our symbiosis with other organisms is characterized by care and respect, we can strike a better balance between the worlds of human and non-human others. Indeed, blurring species boundaries might help us go beyond our conception of the vegetal world as a passive, unconscious resource for human use, and towards a shared, embodied existence of cooperation, collaboration and conscientiousness.

"Blurring species boundaries might help us go beyond our conception of the vegetal world as a passive, unconscious resource for human use, and towards a shared existence."