How could a new quotation mark convey annoyance or worry? How might a heavy sigh, skeptical eyebrow, or elated shudder exist as a new letterform?

In the age of emojis, type and image work in tandem to bolster our typographic voices, conveying our wide range of emotions. What if, in lieu of relying on smiley-faces and eggplants to make our point, new punctuation could formally articulate the meaning of a message as conveyed through gesture and expression? Much like written music relies on specific symbols to designate key, volume, pacing and pauses, I believe new letterforms— inspired by facial expressions, physical gestures, and social symbols— could better inform our visual inflection.

I propose a new set of characters to supplement our existing typefaces, attempting to make the rich complexities of verbal (and nonverbal) conversation visible. These fifteen new characters, composed of letterforms and punctuation marks, are designed to exist within Helvetica— one of the most commonly used typefaces in the world. Equally poetic and pragmatic, these characters aim to prompt a larger discussion: what is the role of speculative design in typography, and how might these pursuits advance communication? 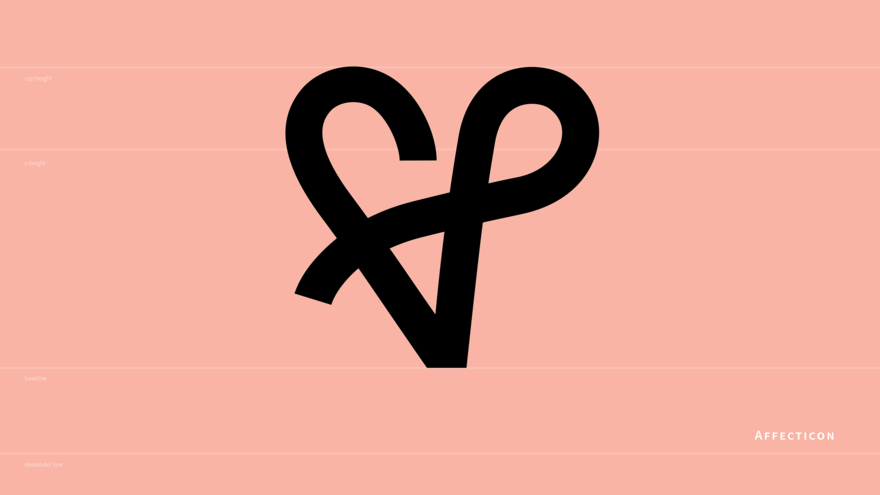 Affecticon Referencing the connection of an ampersand, the social symbol of a heart, and the corporeal movement of a hug, the Affecticon represents love and affection. 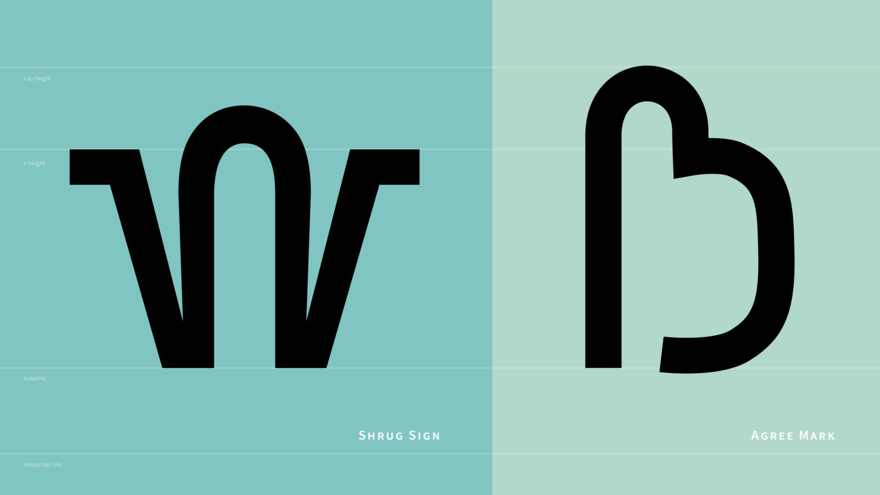 Shrug Sign / Agree Mark The Shrug Sign references a familiar non-verbal gesture of uncertainty. The Agree Mark is shorthand for 'yes' ; a gestural thumbs up. 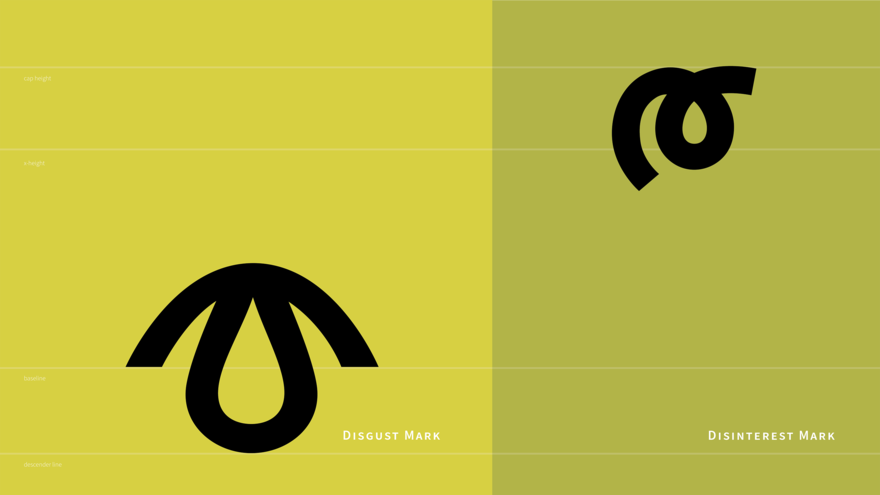 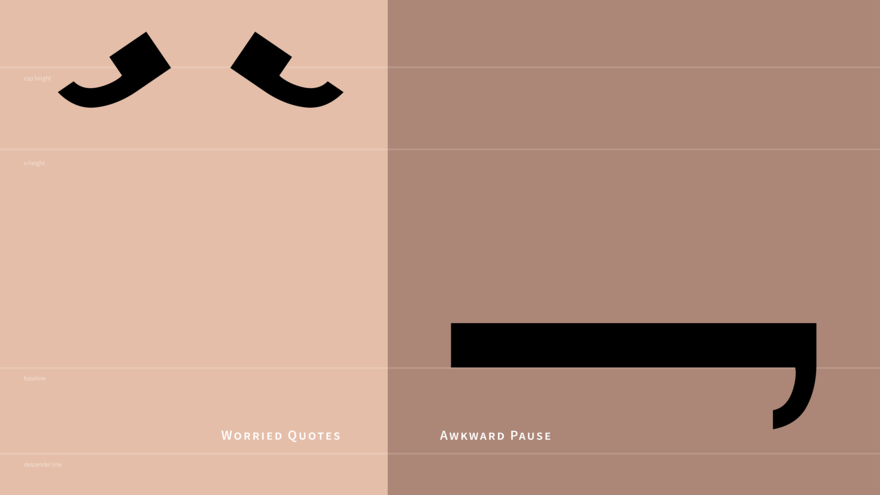 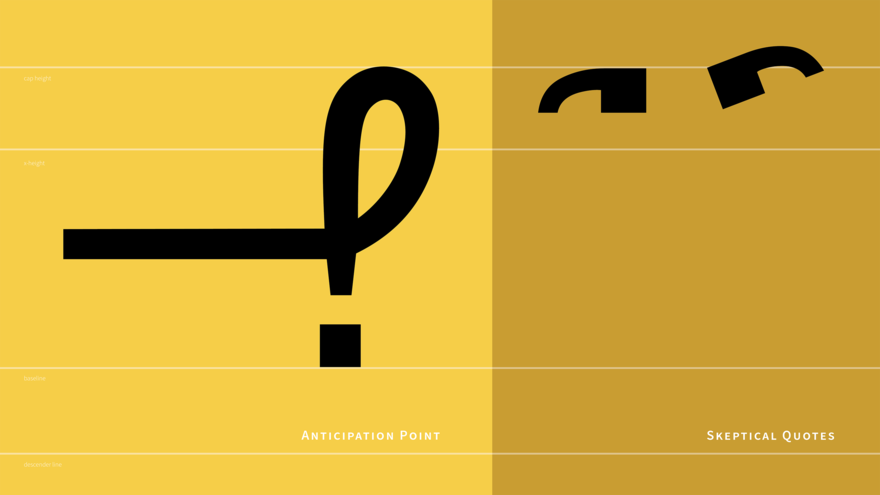 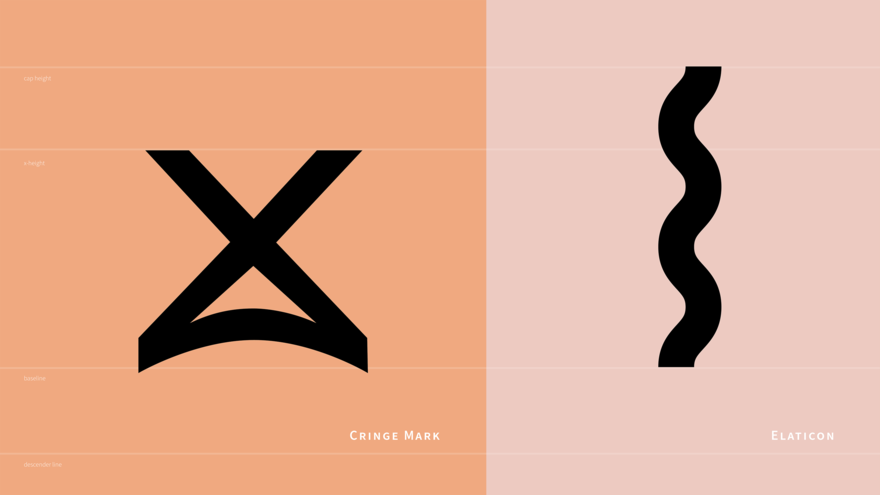 Cringe Mark / Elaticon A tense character influenced by a crumpled facial expression, the Cringe Mark embodies a sharp wince, embarrassment, or pain. An excited shudder, the Elaticon is a gestural jolt of elated energy. 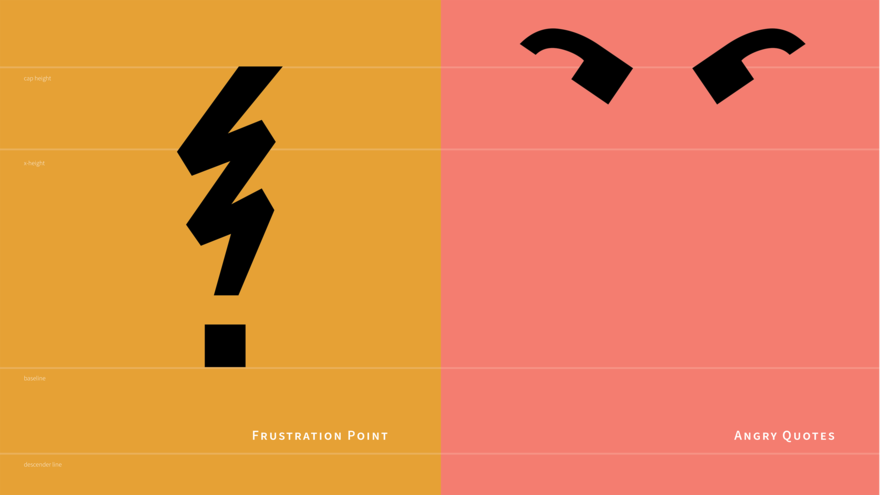 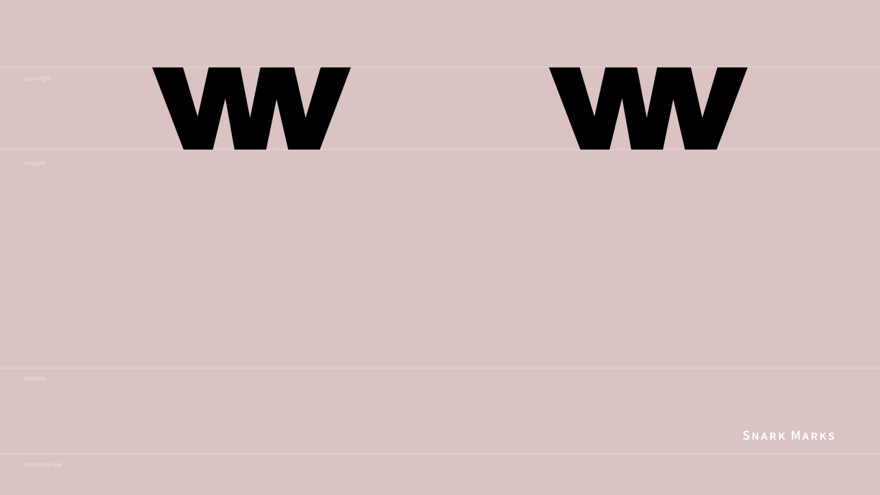 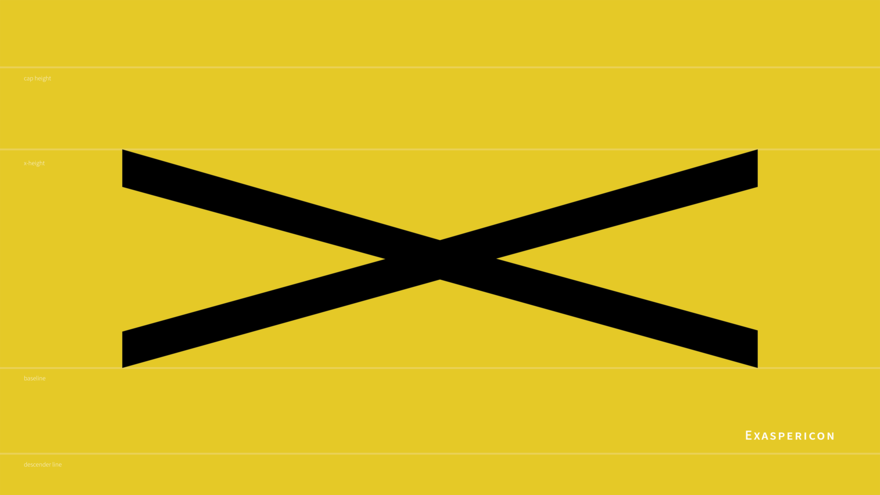 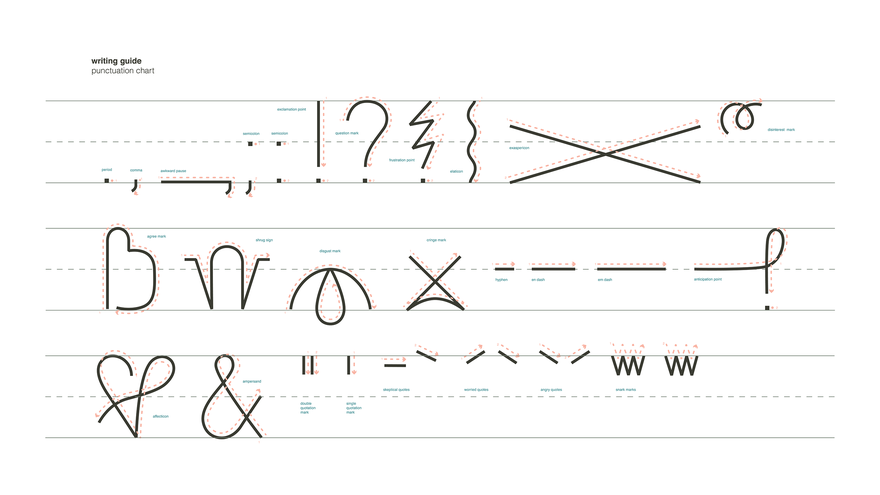 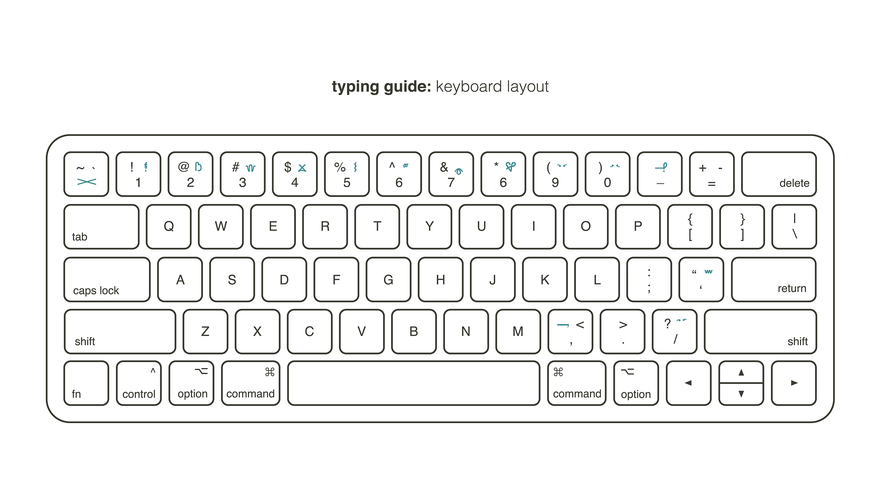 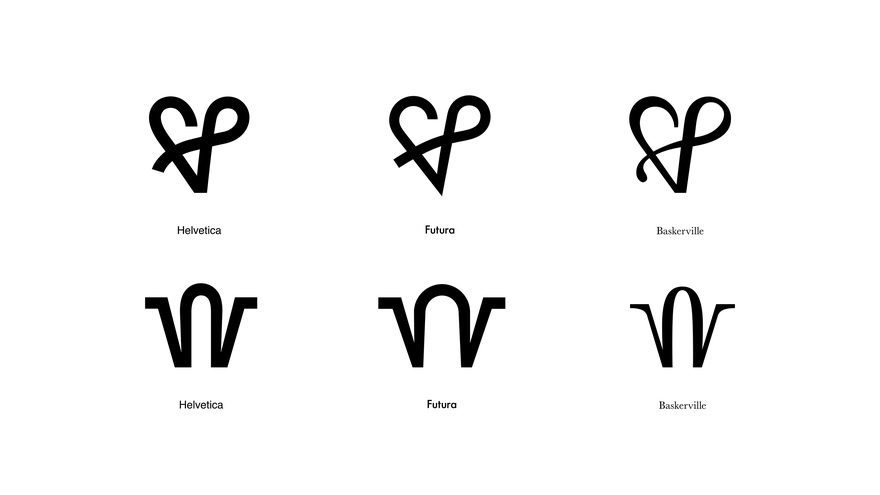 After a long day of teaching and designing type, I sat down and let out a deep sigh. My husband remarked "That's a heavy sigh!" Normally this wouldn't have been a salient observation, but I was struck by the word 'heavy'—used both to describe the intent of a sigh, and also the weight of a typeface. I began to wonder: what a heavy (or semibold!) sigh look like its own letterform?

So much of our communication is nonverbal. To compensate in written communication, we use emoticons, emojis, and gifs to enhance our typographic tone. While effective additions to language, emoticons exist as recontextualized letterforms, and emojis create visual discontinuities and lack formality. In typography, we create visual inflection through typeface and punctuation choice. These socially recognizable patterns create meaning: we know Comic Sans feels amateur, and can articulate the subtle, important difference between "thanks." and "thanks!" As a designer, I wanted to know: why don't we have more typographic options? How could we expand our character set to more fully reflect our methods of communicating?

Designers have long pondered the relationship of type and nonverbal communication resulting in a rich—yet not widely known—history of speculative typography. Even now-recognizable symbols were once new, like the ampersand (&), a ligature of "et"—the Latin word for and— or the at sign (@), once a shorthand character seen as early as the 6th century. The first proposed emoticon can be seen in Puck Magazine from 1881, and an obviously gestural character called a manicule (a tiny pointed hand) originated in the margins of illuminated manuscripts before becoming popular in the Victorian era. In the 1960s, advertising professional Martin K. Speckter designed the interrobang (?), a combination question mark and exclamation point intended to punctuate an incredulous query. While it never became widely used, it prompts asking: how do new characters become commonplace, or what might they look like within existing typefaces? In the 20th century, Arial Sarcastic (proposed in 2004), theorized that a reverse italic typeface could specify sarcasm, while Adam Stanway proposed such new characters as the Happy Mark to specify cheerful tone, and the Sarcastheses, for specifying ironic statements.

When I began my own investigation into new characters, I used physical gestures, facial expressions, sound and shape, the pace of speech, ease of writing, and feasibility to inform their development. (It's important to acknowledge that these are designed from my own (Western) perspective, and that all type lives within specific cultural contexts. As such, these characters are not intended to be exclusive, or exhaustive.) Typically, there are seven facial expressions universally recognized: happiness, sadness, fear, disgust, anger, contempt, and surprise. This gave context to which characters may be most useful or have the widest audience. Corporeal gestures (such as making air quotes to mock a phrase, or the thumbs up to signal agreement) influenced mark-making qualities to emulate motion or action. Studies have shown that sound and shape are connected across language and culture. The Kiki Bouba effect showcases a sharp, jagged shape beside a smooth, rounded shape. When asked to assign "kiki" and "bouba" to the shapes respectively, participants shared overwhelming agreement— kiki sounds sharper, and bouba rounder. This meant new letterforms needed to "look like" their respective sounds — meaning harsher sounds needed sharper letterforms, while more gentle gestures and and sounds required softer shapes.

Pace of speech was also important to take into consideration. In typography, letterforms reflect the length of time in reading or thinking, as seen in the differences between hyphens, en dashes, and em dashes. Hyphens are made to quickly connect compound words, taking less time to read or think (consider the word in mother-in-law). En dashes are slightly longer, denoting a length of time, substituting the word "through" (such as July 8–10). Em dashes—shown here denoting a change of thought— are even longer, reflecting the time needed to shift between ideas. To manifest their spoken pace, drawn out and abrupt noises needed to be treated as such in new letterforms. In addition, feasibility and context were important. Determining if the works could be seamlessly handwritten was as important as choosing a common typeface (Helvetica) to design them in. These works developed in an iterative process with selective user-testing for clarity and effectiveness.

Considering common emojis and existing methods for articulating gesture (such as *sigh* or *cringe*) this expanded character set includes the following: The Affecticon, informed by the ampersand and heart. denotes love, care, and affection. The Shrug Sign is a familiar gesture of uncertainty, while the Elaticon represents a joyful bodily shudder of excitement. The Disgust Mark showcases a frowning displeasure, signifying "ugh" or "yuck." The awkward pause is a long comma. The frustration point is bristled, urgent and annoyed— in both its written gesture and appearance. The Anticipation Point is a ligature (two or more letters combined) of an em dash and exclamation point, maintaining the urgency of two exclamation points without the character redundancy. The Agree Mark references a thumbs up as a symbol of solidarity or agreement while the Cringe Mark is a wince of pain or embarrassment. The Disinterest mark is an eyeroll or dismissive scoff, and Snark Marks are used to express mocking tone in the palace of air quotes. The Exaspericon is a heavy sigh, and Worried, Angry, and Skeptical Quotes work like eyebrows—giving specific tone to questions and phrases.

With the prevalence of digital written communication, the ways in which we communicate effectively with each other is increasingly paramount. These characters give greater clarity to written communication, expanding our ability to evoke and clarify. In lieu of emojis, new characters can exist embedded within typefaces, creating a formal avenue for gestural communication in visual inflection. In both the personal and the political, increased typographic options can mitigate confusion and elucidate intent.

Most works in speculative design exist within architecture and industrial design, as their physical contexts of use readily lend themselves to imagined future interactions and scenarios. Designing additional elements for "world building"— such as a writing guide for teaching characters to children or a new keyboard with these characters— gives greater context for use in a possible future. In addition, exploring how they may look in other typefaces (such as Futura and Baskerville) provides further examples of how they and where could be implemented.

Because speculative works use design as a method of asking "what if?", these Speculative Characters are simultaneously discursive, practical, and hypothetical, serving to critically question how we currently communicate— and how we might in the future. These works have been honored with an STA 100 award (2019) presented by the Society of Typographic Arts, selected as one of the "100 best examples of typographic excellence produced in the previous year." They have been presented at TypeCon 2019 in Minneapolis, MN. As large polypropylene prints and small letterpress pieces, they have exhibited at the Lexington Art League in Lexington, Kentucky, Tarleton State University in Stephenville, Texas, and at Harbourfront Centre in Toronto, ON, Canada, as part of DesignTO (Toronto Design Week) where they were awarded Best in Festival for New Work. Most recently, they have been exhibited in a solo exhibition at the Seymour Art Gallery in North Vancouver, BC, Canada.