Recognizing the growing challenge of water shortage, the UN General Assembly launched the Water Action Decade—officially the International Decade for Action "Water for Sustainable Development"—on 22 March 2018, to mobilize action that will help transform how we manage water. However, the word, manage, sounds distant and vague. When we talk about water problems, most of the time, we will blame it on the big companies, the governments, the weather, even the leaking pipes. And then we use water as if it is unlimited. That, to me, is contradictory. Become A Dropian is a speculative project aims to let people rethink their relationship with the ubiquitous water that they have access to all the time. In 2025, dropianism, just like veganism, becomes the new trending lifestyle. Dropians are only using recycled water as their daily water supply. In the project, two physical products: 1) a desktop water purifier and 2) a mask that collects users' tears, breath vapor, and saliva, are designed to show how everyday life in 2025 would look like. Instead of purifying tap water, water collected from all sources is being purified, such as rotten fruit juice or pee. And the mask shows dropians' dedication to saving every drop of water. Belonging to the same company, Drops, these two products, together with all kinds of potential products, help the users to reuse and recycle all the water they can collect. And by doing so, I hope the audience could respect water more on the fact that we can have access to pure water anytime by simply turning on the tap. 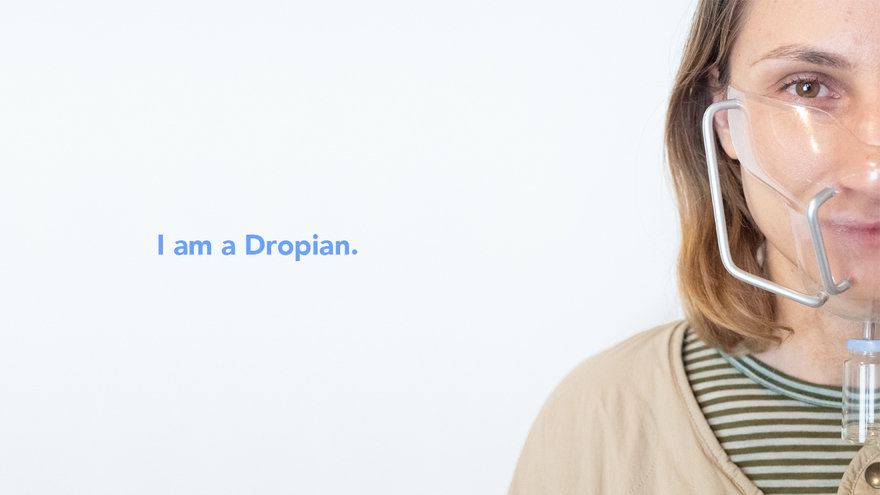 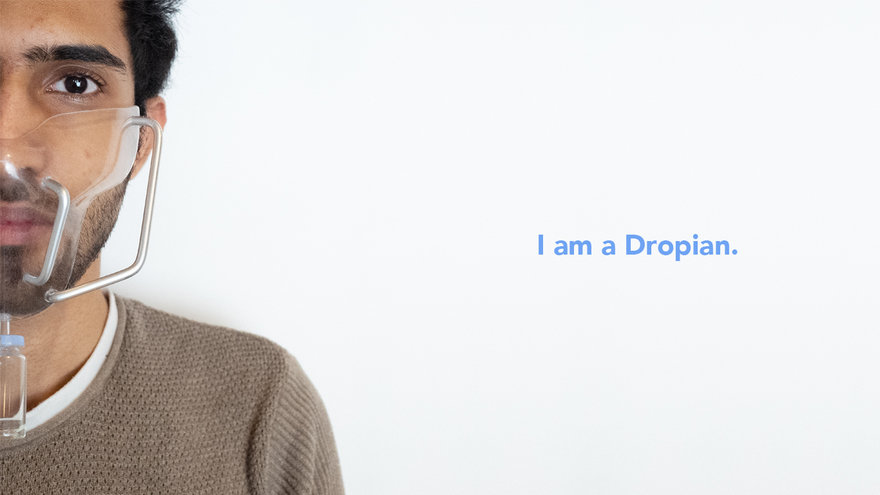 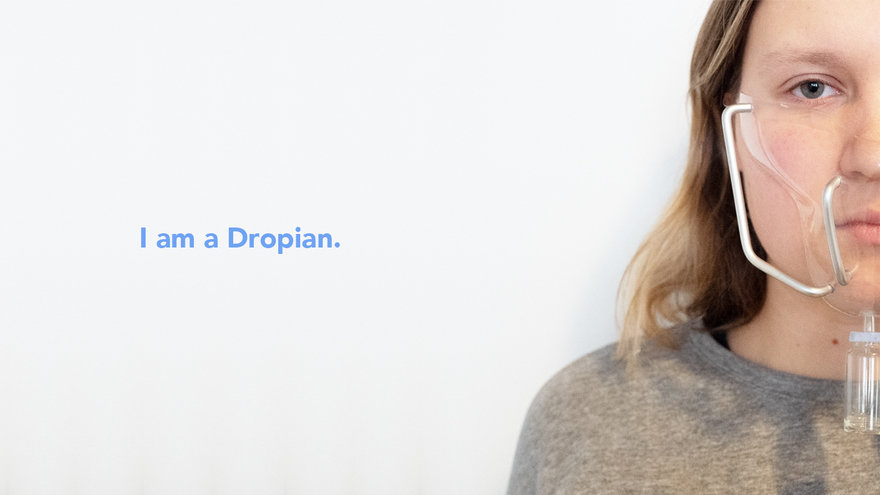 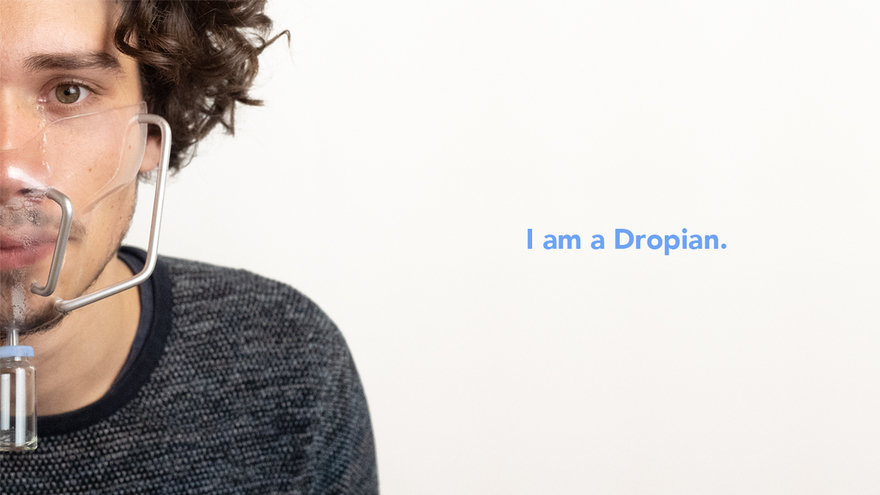 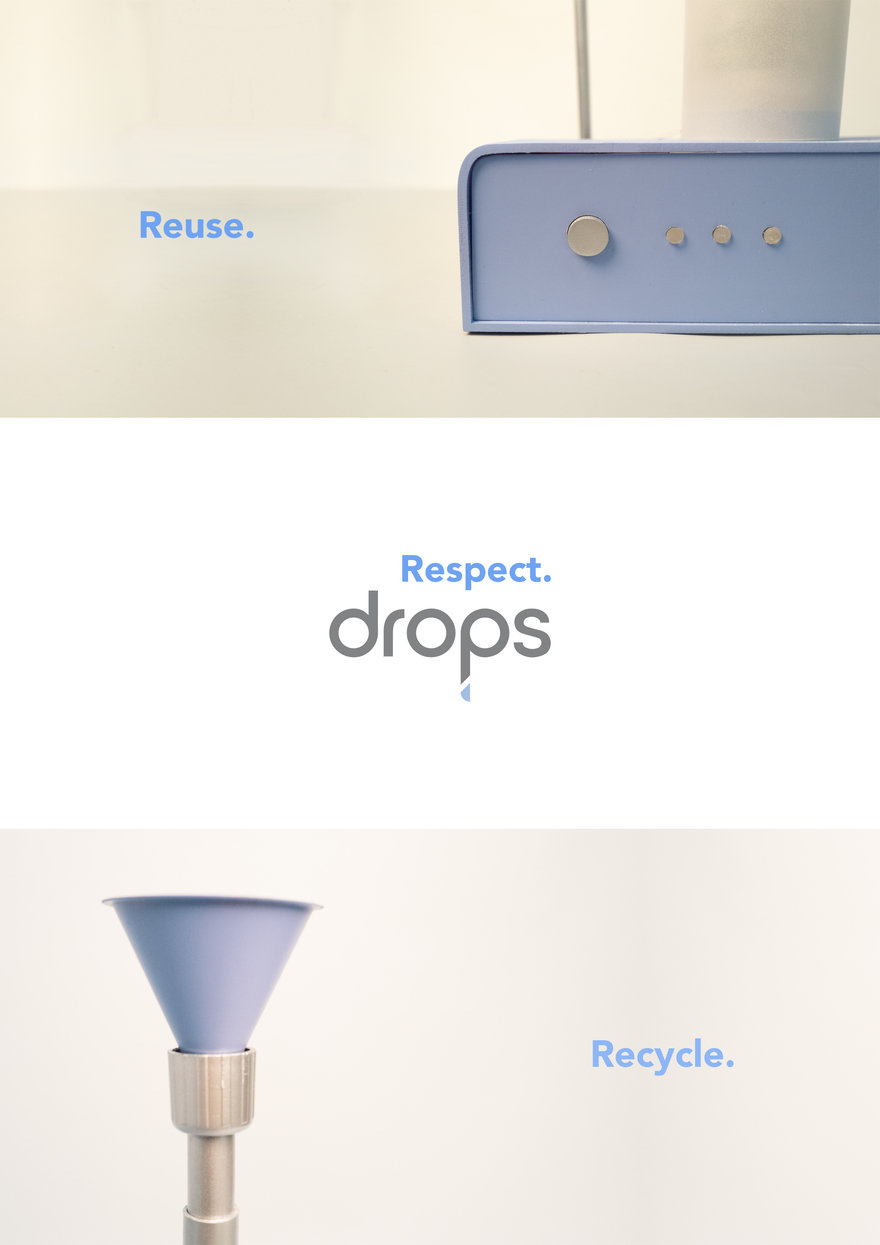 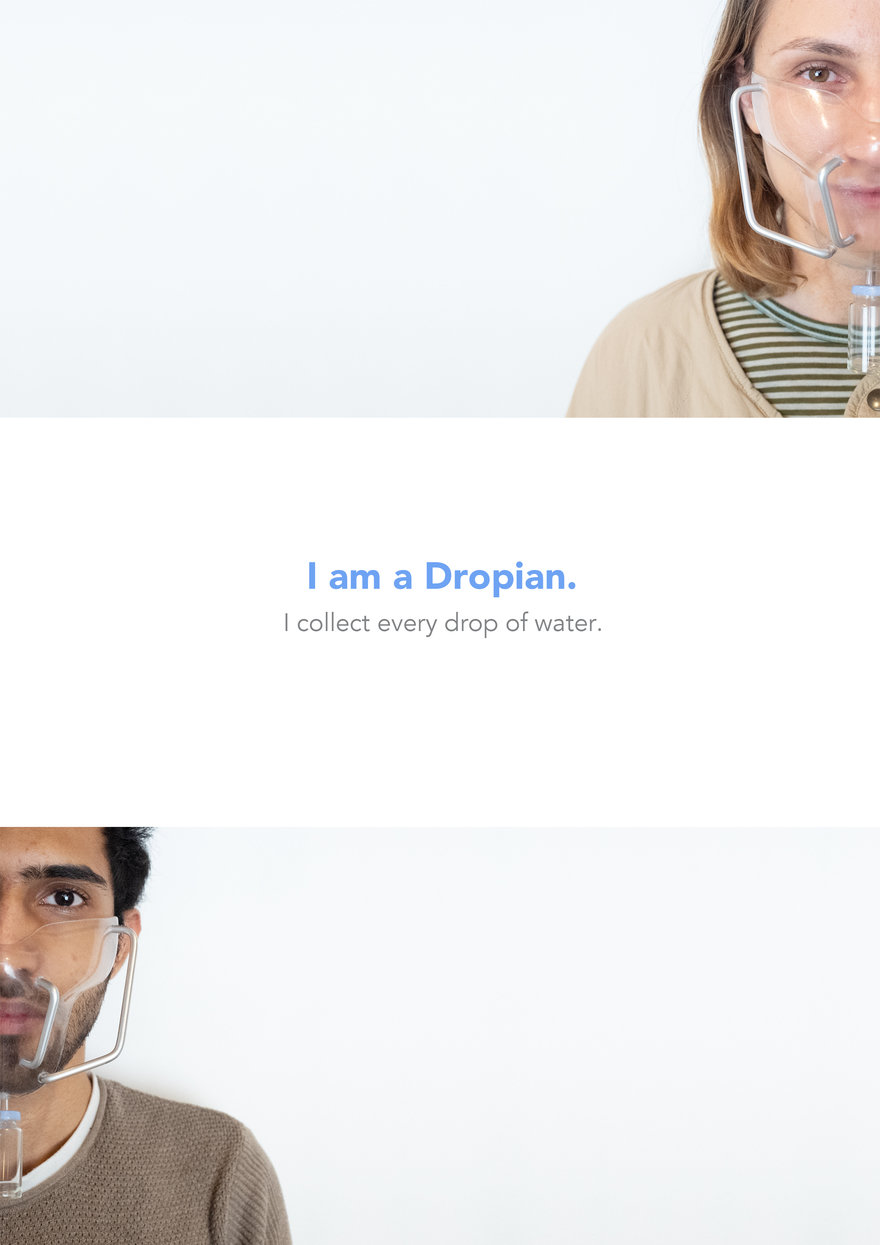 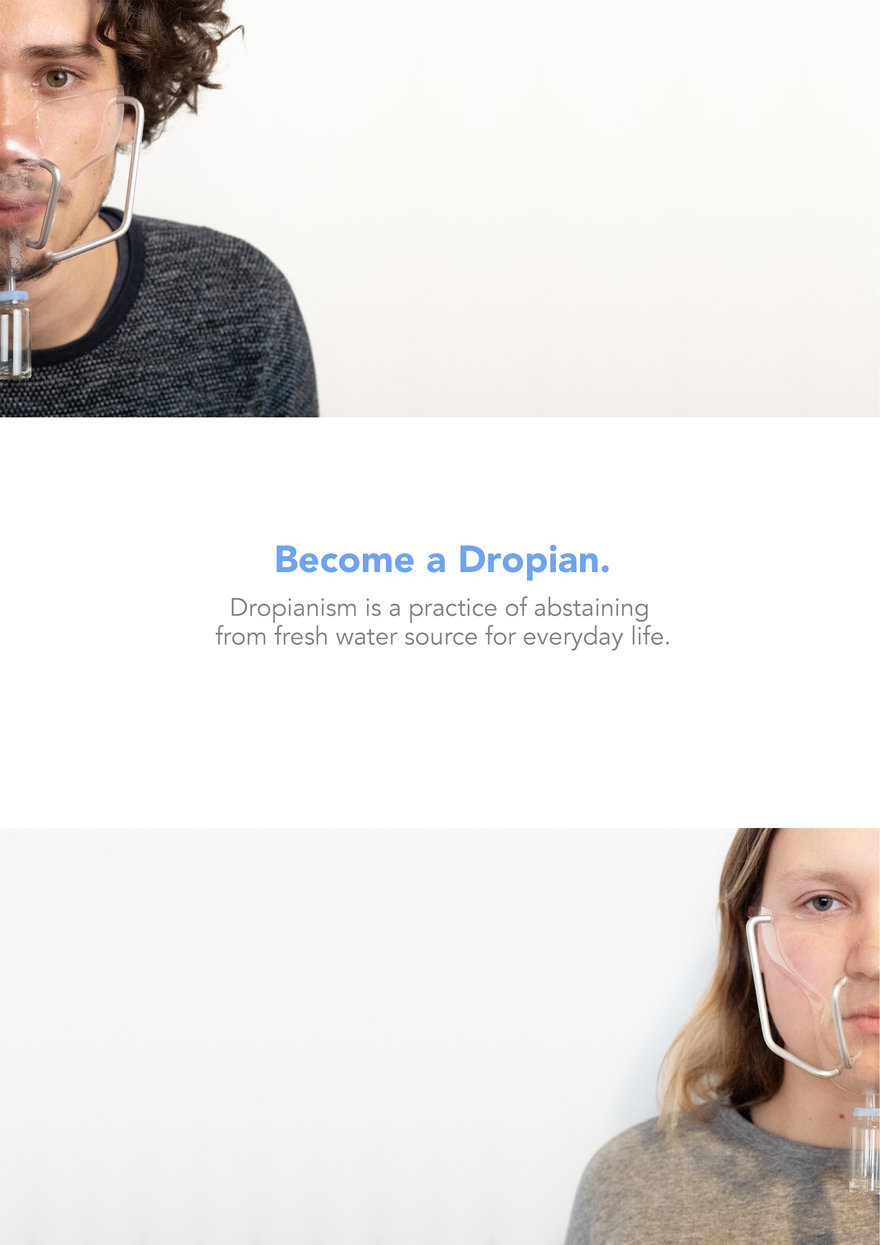 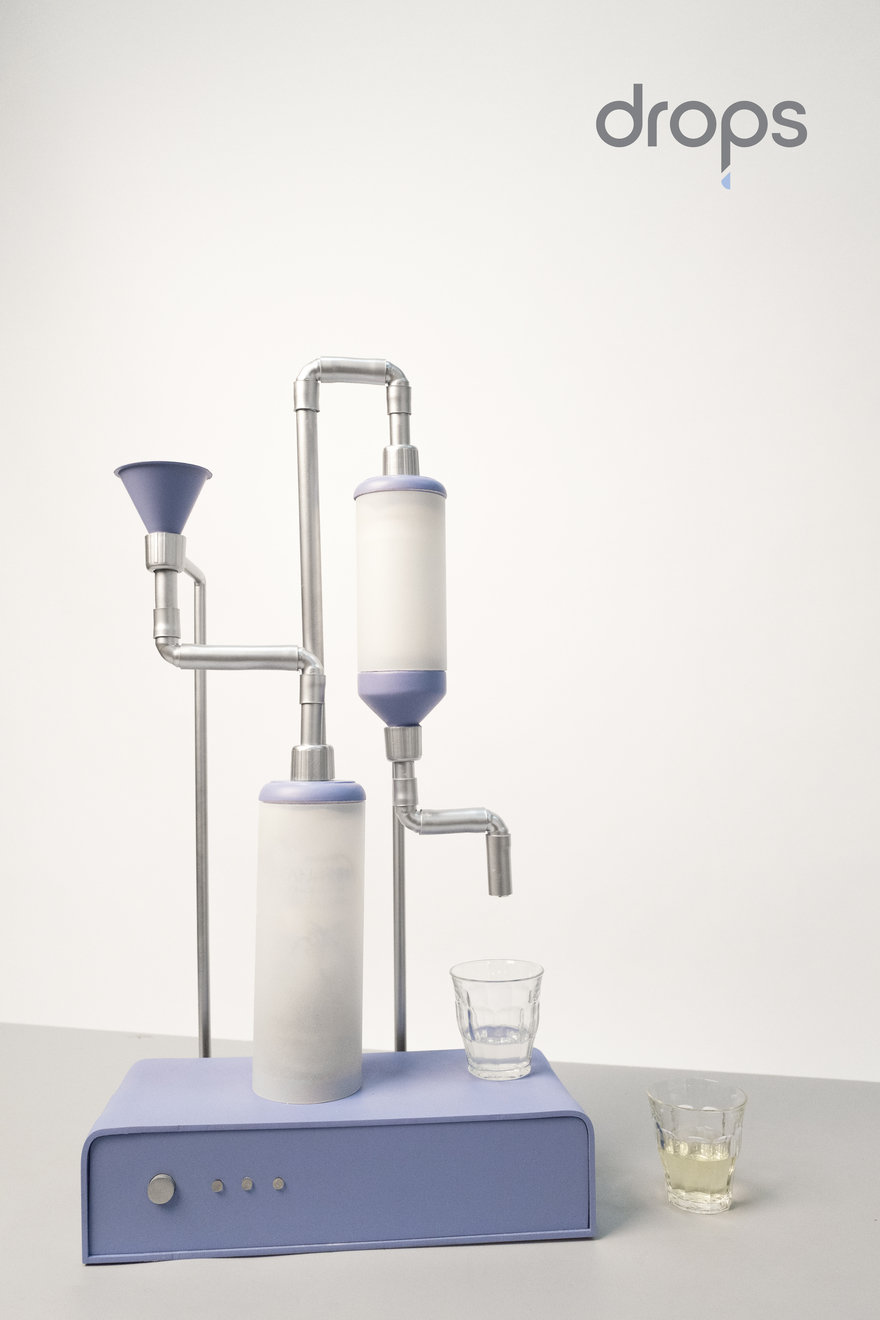 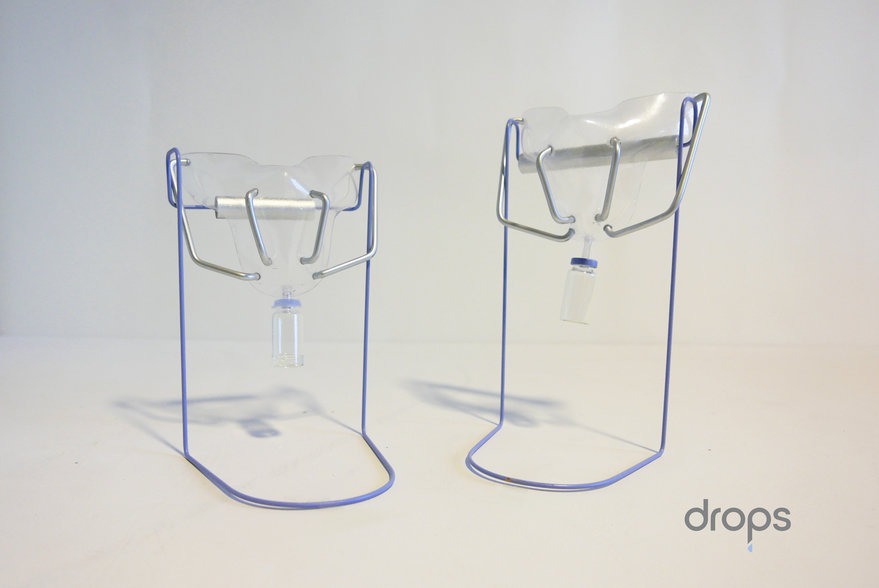 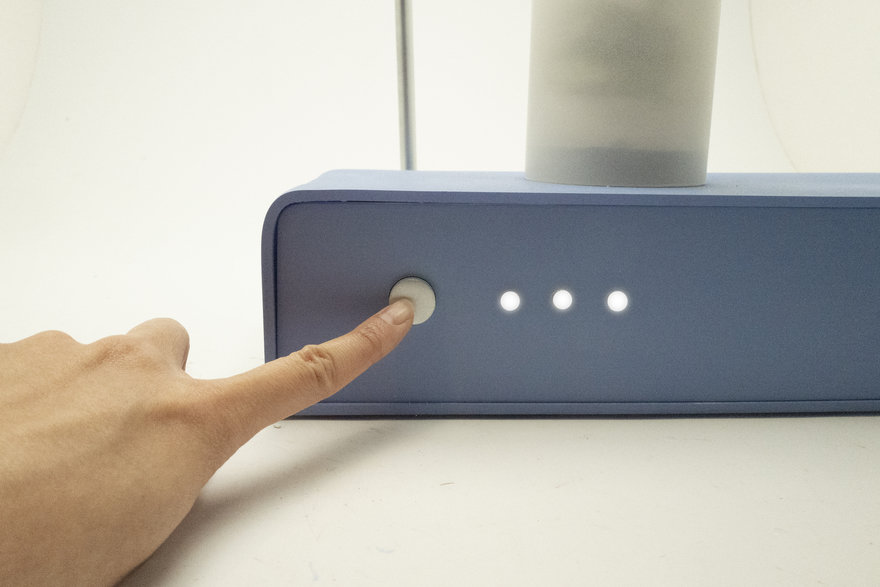 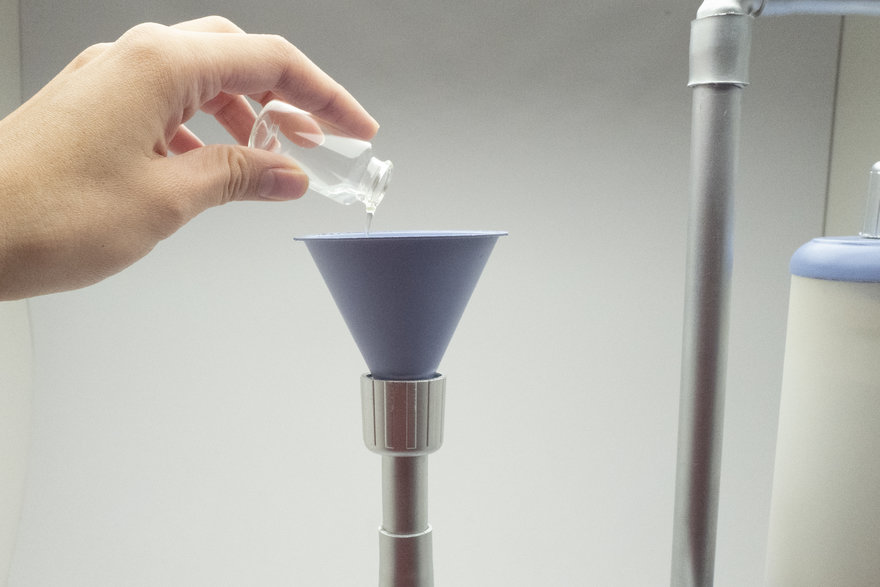 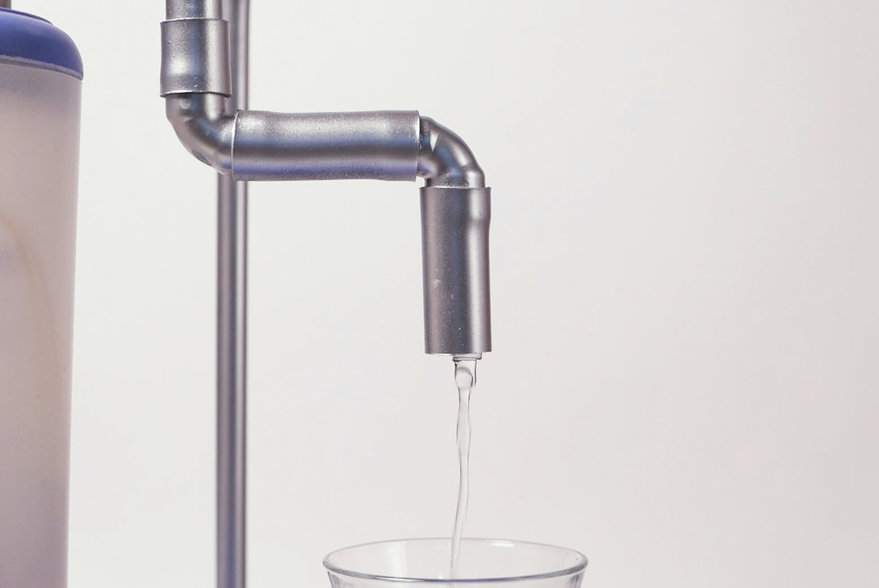 Based on statistics, more than half of the world's population endures extreme water scarcity for at least one month a year. Humans are really facing the water crisis. However, this number sounds distant and vague, because a lot of us can still turn on our taps and get water wherever and whenever we want, we don't feel the crisis at all. Access to ubiquitous water is real, but the water crisis is also real. And I believe if we don't take action now for this distant crisis, it will become true to everyone soon. But how can we relate? How can we change our behavior?

Thus, this project aims to let people rethink their relationship with the ubiquitous water that they have access to all the time.

Setting up in 2025, this project provides a glimpse into a speculative future, where dropian becomes a trending lifestyle, just like vegan now. Literally, it means people who save every drop of water. And dropianism is a practice of abstaining from freshwater source for everyday life, which means instead of using freshwater supplies, including water in ice sheets, ice caps, glaciers, icebergs, bogs, ponds, lakes, rivers, streams, etc, dropian only use recycled water to support their daily water usage.

And the project contains two physical products: 1) a household water purifier and 2) a mask that collects users' tears, breath vapor, and saliva; as well as related videos to explain this speculative world as well as the products.

With the products and the narratives, the project tries to explain the life dropians choose to live and why. The household water purifier is a mundane product that already exists in our home right now. What is different is that instead of purifying tap water as we do now, dropians use the machine to purify all sorts of water, such as rotten fruit juice, pee, sweat, etc. And the mask is a more extreme product. By wearing the mask, the hard-core dropians are really obeying their doctrine to save every drop of water. The combination of the mundane purifier and the dystopian mask works to make this speculative future trustworthy. And the form language of the products serves as a statement of dropians.

The water purifier is a prototype that functions with Arduino modules, a pump, and filter systems inside. During the final presentation, audiences interacted with the purifier, to pour pee (made with artificial color and tea) inside the machine and get purified water to drink. By using visual similarity, audiences could better relate to this future scenario. Especially in the Netherlands where residents get almost the top quality drinking water in the world yet they are also flushing the toilet with this high quality drinking water.

This is a project for Science Friction Minor in Design Academy Eindhoven. The goal of this minor is to use speculative design to envision a future world, related to technology and science, that may start up a discussion. While most of my classmates focused on apparent technology issues, such as AI or Trans-humanism, I, after a long-time of self-debate, chose to go with one of the less obvious topics that I am concerned the most, water.

During one of the lectures, our professor showed us a TED Talks named How Technology Becomes Nature. The speaker mentioned the pyramid of technology, where on the highest level it is naturalized technology, which is the kind of technology of which people use without noticing the existence. And tap water system is one of them.

Sometimes I am pissed off by how people use their tap water. I've seen people just turn on the tap for the maximum and wash their dishes for 5 mins. I've seen people would pour out old water from the kettle and refill it with fresh water, even though the old water after being heated up might be even cleaner than fresh water. I've seen people flush their toilet both before and after because of hygiene concerns. People are so used to using water mindlessly. Yet when they talk about water problems, they very easily blame it on the facilities, the industry, the government, the privatization, etc, and feel that whatever they do would be so minor a thing to change the situation. And I also realize that talking about water or even environmental problems is tricky. Because I don't want my project to become another cliche.

My closest friend in Design Academy Eindhoven is a vegan. Before I cannot even tell the difference between vegetarian and vegan. I learned so much from her daily life. And then I realize the power of a trending lifestyle. Even though there would still be people who are not vegan, but they still accept the fact that a group of people lives in a different lifestyle and they are also trying to understand. And so many changes have been made in the industry to cope with the needs of vegan, such as Impossible Burger and Vegan Doctor Martin Boots. It is the needs of the consumers that change the direction of the industry. That's where the idea of dropian came from.

Now when we talk about the water crisis, we always relate it to specific areas, most likely countries in Africa. And during the research process, I was so tired of watching TED Talks showing some people designing a new and portable water purifying machine for Africans and claimed that they solve the problem. So by designing a commercialized water purifier under the company name Drops, I want my audience to realize it's not only a problem for the third-world. And the company's tagline is Reuse, Recycle, Respect. Together with the mask to collect even breath vapor, I really want my audience to rethink the fact that we need to respect water more.

When dropian is trending in 2025, I believe there would be quite big decision-making changes on both personal and industrial level. But is it a world we really want to live in? Is it too late then? Let's become dropians today.