1. Portability: Rosary beads aren't handy to carry (59 beads), and they are not supposed to serve as a jewelry. So, most Catholics don't bring the rosary beads with them in daily life.

3. Miscount: Some people pray during transit or breaks in between work and class. Lack of rosary beads can result in miscounting 10 times "Hail Mary" prayers in every mystery.

4. Privacy: Some followers value religious privacy in public, but traditional rosary beads is almost an icon of Catholicism which is too easy to identify.

The design of Osari is intended to solve above-mentioned issues. It's not a replacement for the traditional Rosary beads but a tool for people to count the number that comes in handy. 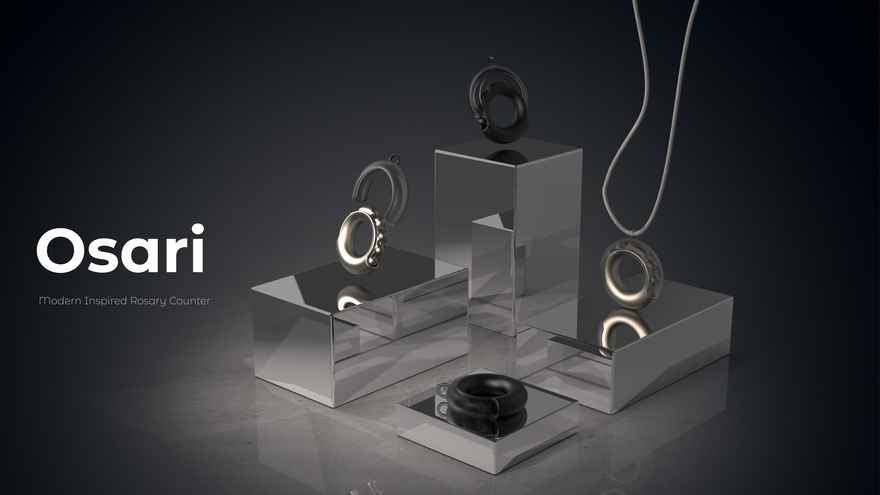 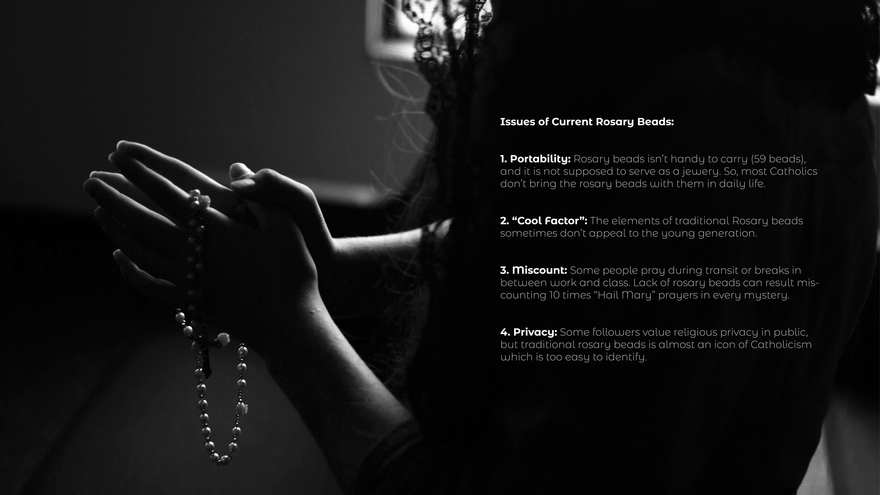 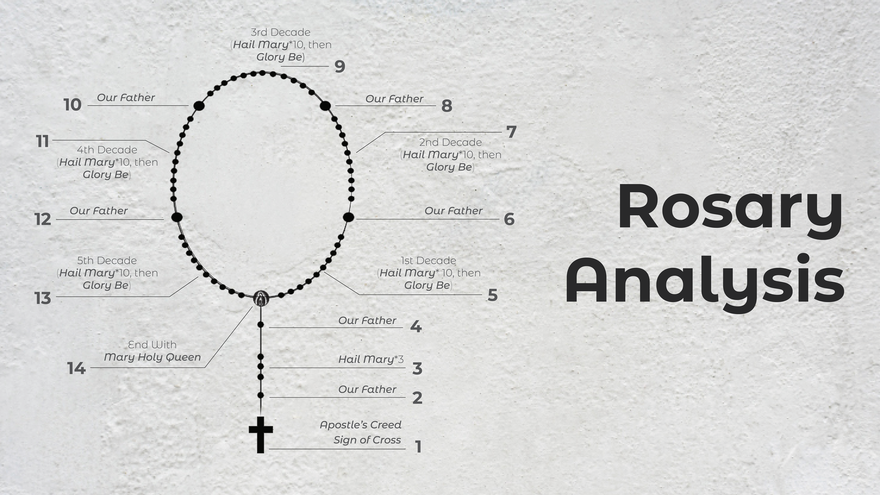 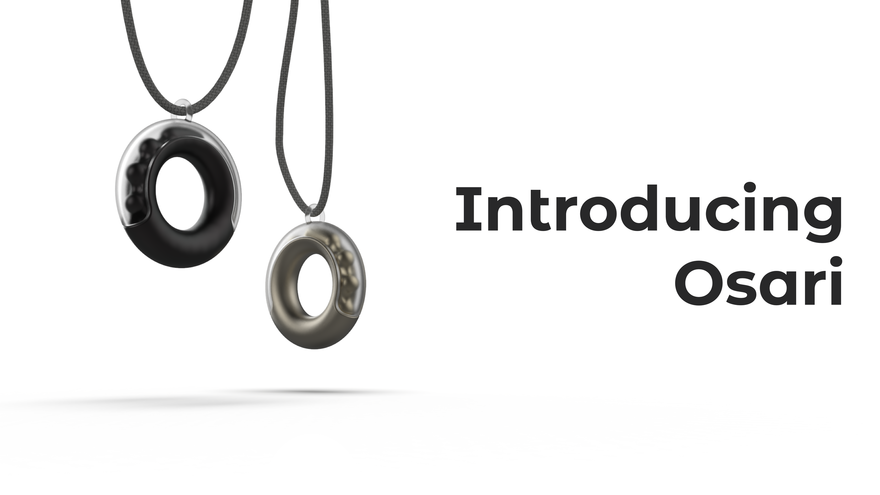 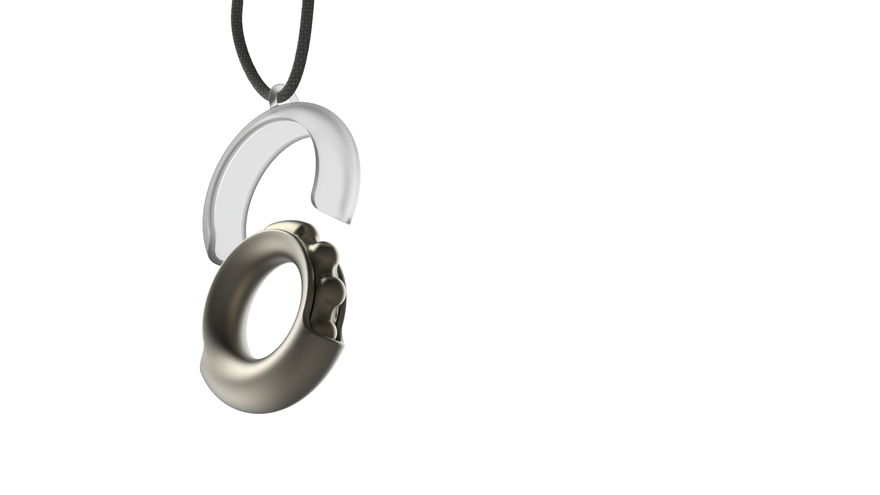 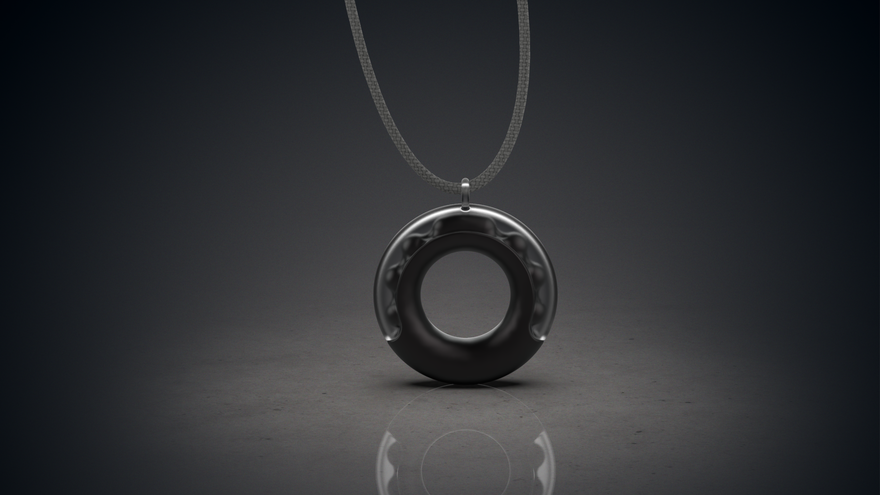 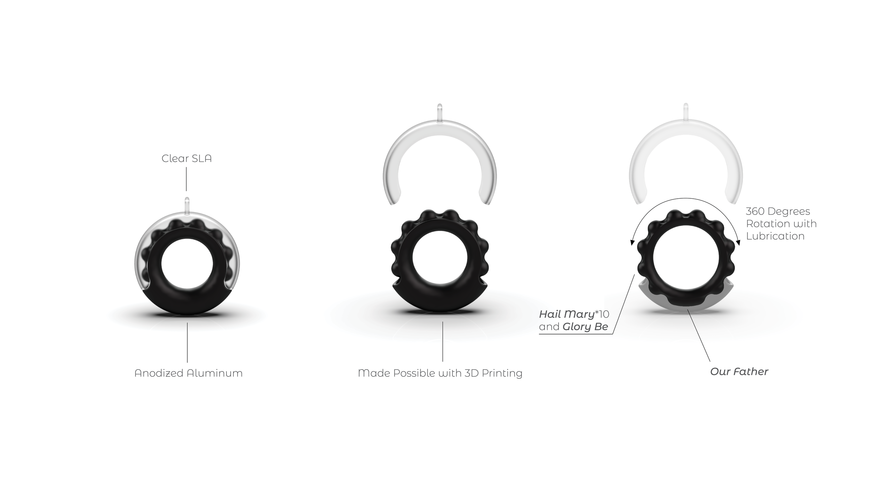 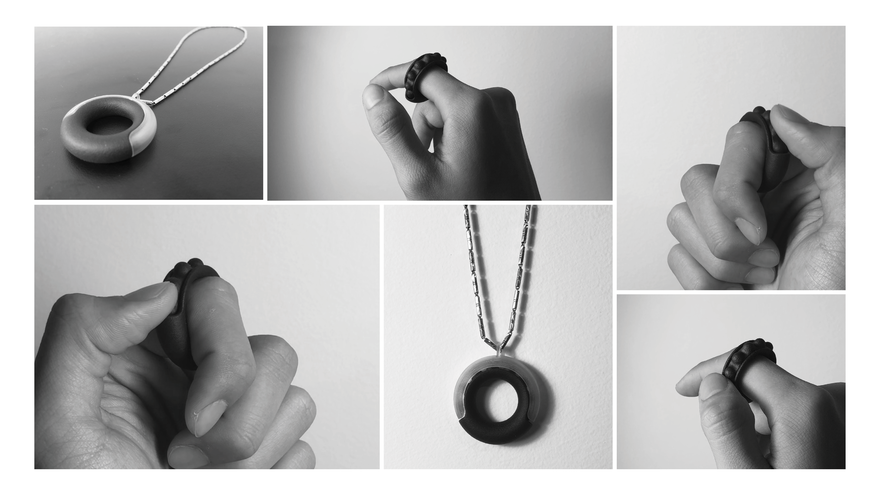 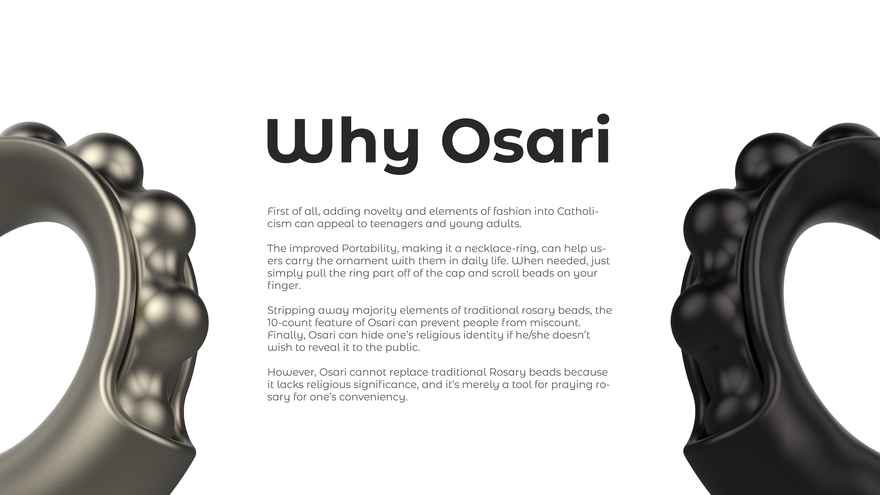 In modern days, people are living a fast-paced life, including people with religious affiliation like the Catholics. When people are busy working or partying, it's often challenging to pray under a slow momentum. The good thing is that the Catholics haven't abandoned the tradition, and they keep the prayers going even if it's the most time-consuming one: Rosary. Instead of finding a big chunk of time praying, they pray during transit and breaks in between work or classes. These tiny pieces of time throughout the day constitute the entire Rosary. The fast food restaurants emerged in the 1920s and 1930s to adapt to people's lifestyle and accelerated pace; in other words, it adapted to people's needs.

I received education in both Catholic middle school and high school. One phenomenon I found is that even though people often prayed the Rosary, it seemed that no one brings the Rosary beads with them, and it usually leads to the miscount of ten times "Hail Mary" within each mystery. After praying five or six times, people tend to forget where they were in the process.

There are several issues I found with the traditional Rosary beads. First of all, It's not very portable. You might think 59 beads can be held in one hand, but if you want to count the beads while praying, the chain drops and becomes fairly long. Sometimes two hands might be needed.

Secondly, some of my peers think the traditional Rosary beads lack "cool factors" to be carried around. Technically, the Rosary beads aren't supposed to be served as decorations that people could wear on their body (even though some people put them on the neck). However, people hardly forget about their necklace or watch because these accessories interact well with body parts.

More importantly, there are certain cases that people are not willing to reveal their religious affiliation in the public. For example, if you are traveling to some other regions where Buddhism or Islam takes hold of power, it would be unwise to reveal the Rosary beads because it's almost an icon of Catholicism. Some people would like to keep it as a privacy even in an office or working environment to avoid potential conflicts.

Based on the issues mentioned, I came up with the idea of Osari. First of all, adding novelty and elements of fashion into Catholicism can appeal to teenagers and young adults. The improved portability, making it a necklace & ring combo, can remind users to carry the ornament with them in daily life. When needed, just simply pull the ring part off of the cap and scroll beads on the index finger. Stripping away majority elements of traditional rosary beads, the 10-count feature of Osari can prevent people from miscounting. Finally, Osari can hide one's religious identity if he/she doesn't wish to reveal it to the public.

During the initial ideation, I focused on its portability, aesthetics, and identity. I thought about making a smaller version of Rosary beads, like a bracelet with 10-count beads. However, I thought that this approach was too straightforward and might even collide with the elements of Buddhism. Then I switched my vision onto a necklace, which seems to work as a jewelry. But there's another problem: people's habit is to hold the beads in their hands but not in front of their chests. So, I faced the challenge of separating the beads from the chain. After iterations, I ended up with an ornament that has the shape of a halo, representing holiness without obvious identity of Catholicism, and a detachable beads part that you can wear as a ring. It forms an interaction with the users when they pull the cap off to express a sense of ceremony before the prayers come. The finished material is supposed to be SLA for the cap and anodized Aluminum for the ring part. The shiny anodized Aluminum forms a high contrast with the semi-translucent SLA cap that makes people feel like it's hiding some kind of secret in its belly.

The design and prototyping of Osari is strongly dependent on 3D printing technology due to its form. In the beginning I was worried about the printing precision issues that might leave the gap in between cap and ring part too wide. Shapeway did a great job on my first couple of attempts and proved that my idea would work practically, and the wheel can scroll smoothly even without lubrication.

In another facet, Osari might be controversial which indeed be judged by fanatics. This risk is very obvious, but instead of being conservative and designing something with too many compromises, I'd rather take risks and explore more possibilities. However, Osari cannot replace traditional Rosary beads because it lacks religious significance, and it's merely a tool for praying Rosary adapting to modern needs. Fashion, design, and religion might not seem related, but this is my experimental attempt of putting them together. It's like Chemistry, putting different elements into the same pot can result in different outcomes.