LITHO was founded in 2018 with the mission to change people's relationship with technology. Litho aims to make technology less of a barrier to the real world and instead a tool for people to enhance and engage with their surroundings.

With digitally-connected devices such as smart locks, lights, voice assistants and augmented reality (AR) becoming more common in our daily lives, creating intuitive ways of interacting with spatial computing is crucial. Therefore LITHO set out to design a viable input device to enable people to interact with digital things in the real world, at a relatively low cost and across different platforms.

After evaluating the different ways of interacting with AR and digitally-enabled devices - including hand-tracking, eye-tracking and handheld controllers - we designed an early ring-like prototype for Litho's form-factor. Early user testing showed that it would be necessary to manufacture a large range of sizes if a ring design was selected. A subsequent deep-dive into alternative form-factors, with the help of design consultancy MAP, led us to Litho's unique design. The device is a sleek and unobtrusive controller that's designed to sit comfortably between the wearer's index and middle fingers. It has a trackpad on the underside, an array of motion sensors and provides haptic feedback. The pioneering tech is housed within a precision-machined zinc-alloy chassis. Put simply, Litho's tracking software can identify where you're pointing in relation to the device the controller is connected to via bluetooth. Litho's core interaction framework is underpinned by the concept of pointing at an object to interact with it.

The controller connects to the user's smartphone or smart-glasses using bluetooth. Litho's novel tracking software is able to provide an accurate estimate of the position of the controller in space, and therefore identify where the user is pointing. This context-aware pointing information unlocks infinite possibilities: draw, turn your lights on and off, manipulate music with the movement of your hand, interact with gestures.

Unlike with handheld controller alternatives, Litho users can carry out everyday tasks - like typing, drinking coffee, driving - whilst wearing the device. Litho is always on with 2000+ hours of battery usage in standby and 8+ hours in active use.

Augmented Reality is useful but also magical. The Litho iOS demo app tries to capture this wonder with floating balloons, smash-able glass boxes and planets with gravity. With a big vision for the future of ubiquitous spatial computing, we wanted to help our developer-users prototype for the future by giving them prefab interactions as well as UI presets. Litho therefore comes bundled with a Unity SDK which gives users a complete toolkit for creating interactive augmented reality experiences across many different platforms.

The controller and SDK bundle launched in September 2019 at $199. Since then we have shipped hundreds of developer kits and partnered with some visionary organisations. Now, LITHO is focusing on releasing a content creation app to empower non-technical users to create their own magical AR experiences. 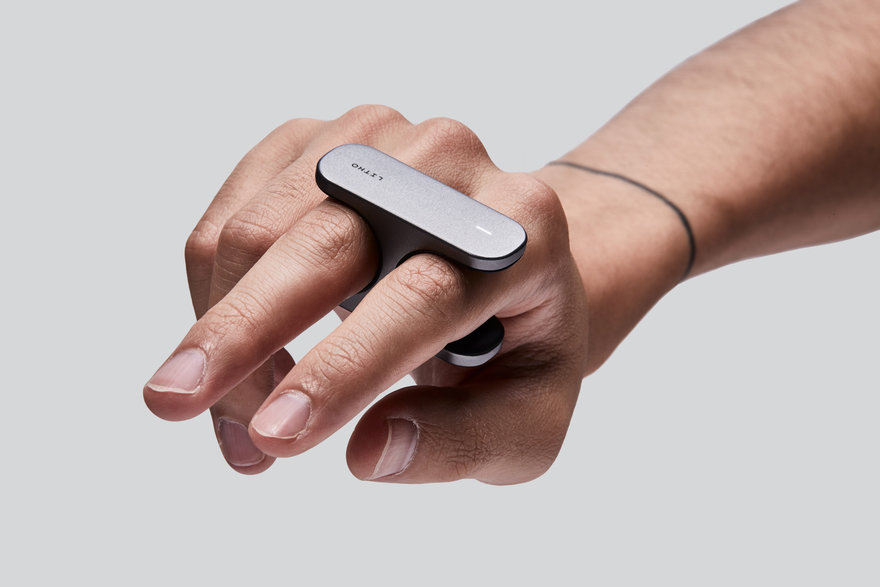 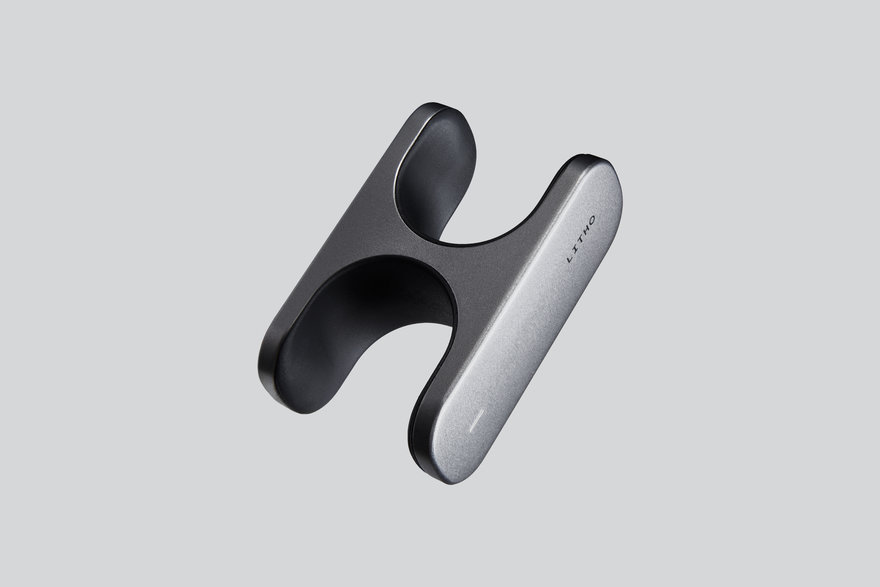 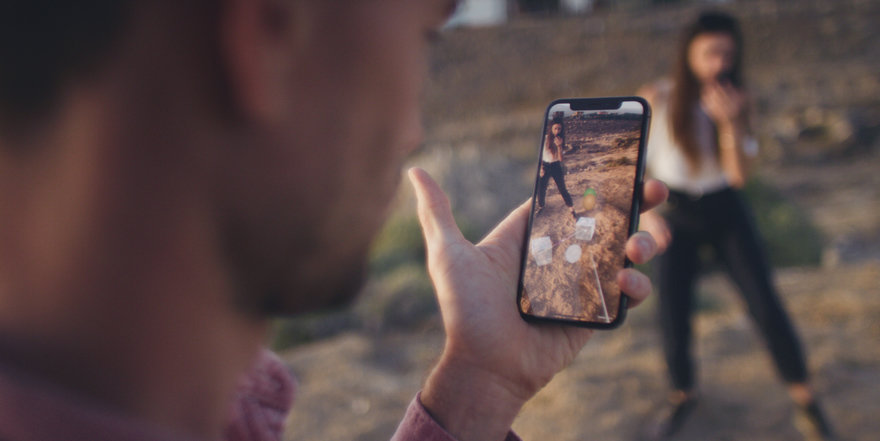 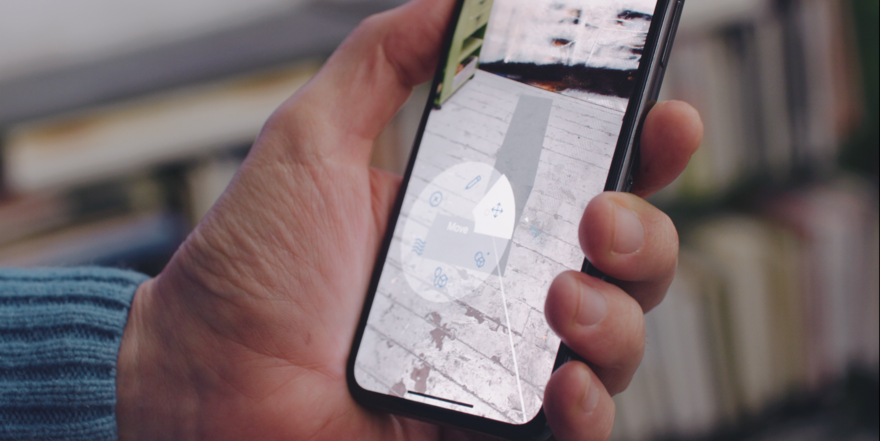 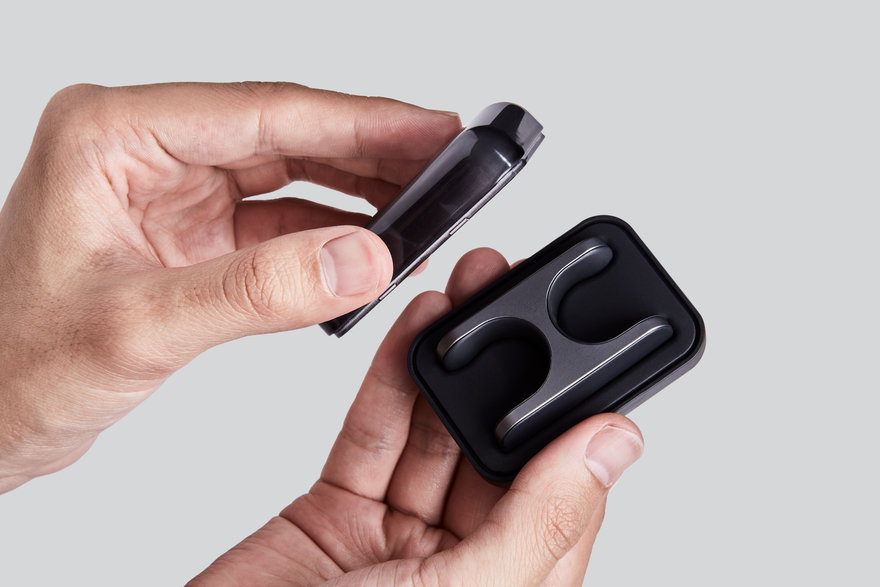 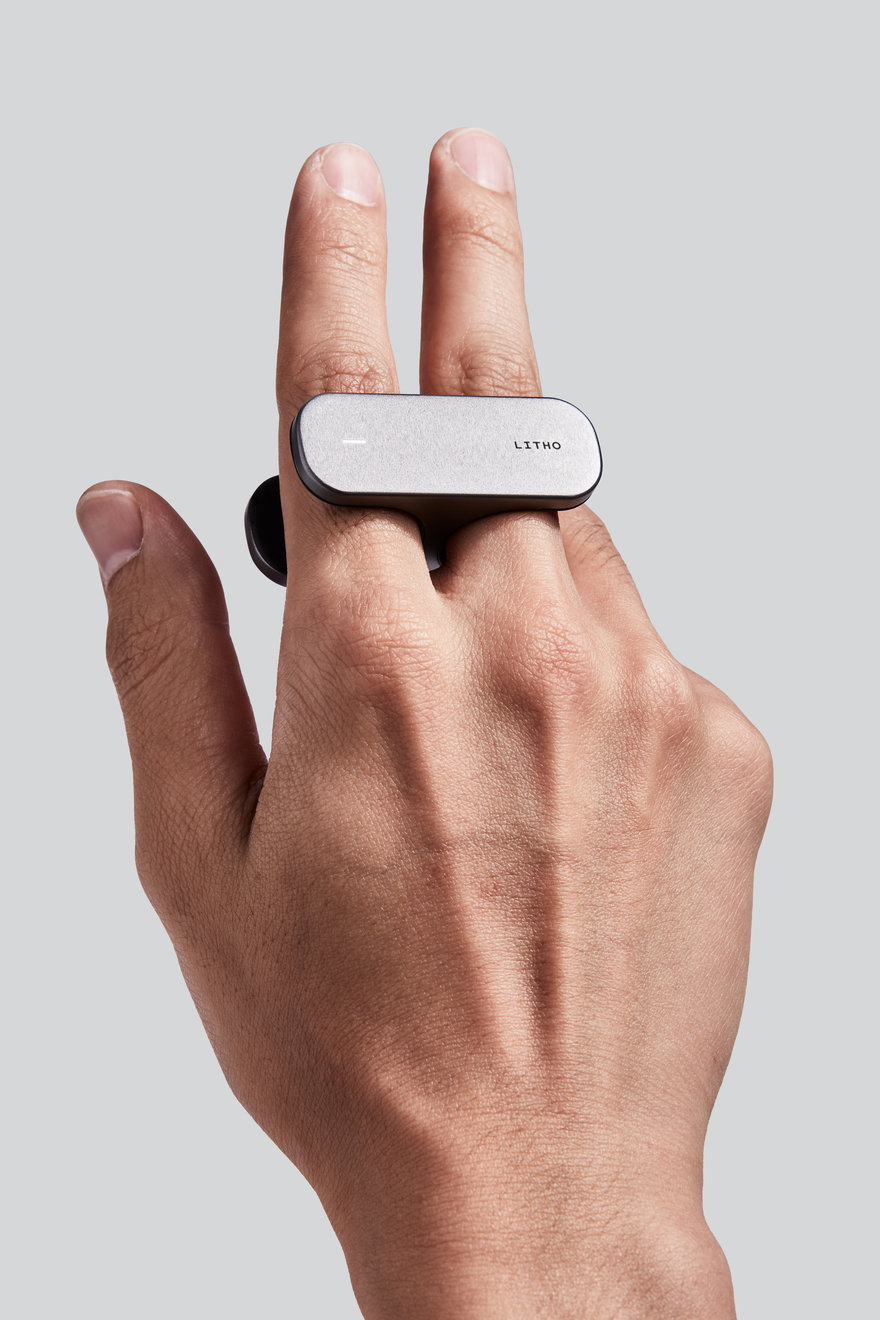 Trying out Microsoft's Hololens v1 was the primary impetus for designing an input device for interacting with spatial computing. Hololens captured the magic potential of spatial computing, however it lacked a suitable way to interact. The user had to learn difficult and unnatural gestures to interact and these often went unrecognised when carried out. Additionally, in order for the device to recognise the gestures the user has to hold up their hands in view of the headset for the duration of the interaction.

We saw that the difficulty that AR creators and users faced was the lack of a viable input device for creating and interacting in 3D space. Mobile AR creators use 2D screens to design in 3D space - a poor interaction which blocks the view of the AR content. End-users also face this interaction challenge: to cast a spell in 3D space in Wizards Unite the user draws a squiggle on the screen of the smartphone. These barriers lead to imprecision, inefficiency and a lack of creative control.

We identified the opportunity to create a low-cost, yet precise and versatile wearable input device for mobile and headset AR.

At first, we experimented with existing available state-of-the-art products for interacting with AR in everyday scenarios. During the process we discovered these alternatives had limitations when in real-world use. For example, eye-tracking is great for expressing interest but selecting by holding your gaze is jarring; voice is suited to selecting categorical data but unfit for scrolling or scaling objects or volume; handheld controllers are restricted in everyday use and enterprise use cases because they require one hand to be free for the controller. Wrist-mounted EMG controllers face some unresolved signal processing challenges.

Spatial computing's promise is of contextual and quotidian computing: on the bus, in your office, in your kitchen, in the factory. We realised that this made it crucial that Litho let the end user carry out other tasks with their hands whilst wearing the device. Litho had to be unobtrusive and wearable.

LITHO's first iteration was a ring prototype with a trackpad on the side for tapping and scrolling. We soon realised in user testing that this ring form-factor made it necessary to produce various sizes. The Team experimented with a latex band for the ring to decrease the need for multiple sizes, but the it became loose quickly. We concluded that unless the material fitted to the nearest 1-2mm, it was not comfortable enough for extended use. Moreover, Litho would need to be manufactured in more than two sizes: a difficult strategy for a small hardware startup.

We went on to investigate flex-form factors like Mycestro's ring, but concern about comfort and the feel of the material being unlike jewellery led to these materials being discounted. It was also proving difficult to fit the necessary electronics components, including batteries, into the ring without compromising on performance and functionality.

After a few non-starters, a deep-dive investigation into alternative finger-worn form factors - alongside the design consultancy MAP - led us to Litho's distinctive, open, helix-like shape. The device sits between the index and middle fingers and is open at the edges which therefore greatly diminished the need for various sizes. The trackpad is located on the underside of the device and can be reached easily by the wearer's thumb to interact.

To get the structural rigidity needed for the form factor, we realised we had to choose a metal for Litho's chassis. The early plastic prototypes were far too fragile. After a small run of 3D printed prototypes, we machined a set in steel and aluminium. We liked the temperature and weight that metal offers when it's worn: when you put on metal it feels nice because it's cold and then it heats up to your body temperature.

We ended up choosing a Zinc die-cast chassis over aluminium because it is denser than aluminium, making the product feel more substantial. It also cost far less per unit to produce than aluminium which was important in creating a relatively low-cost device. We also briefly explored ceramic for Litho which would have enabled Litho to charge wirelessly (which metal prevents), and would have made RF design easier too. However we realised we could not get the wall thicknesses of our design due to manufacturing limits.

For the trackpad we chose to use back-sprayed glass because this felt more premium than our early laser-cut acrylic prototypes. Scratch resistance was also a quality necessary for a device to be worn on a person's hand.

Once settling on the shape, we made a few models to test fit and feel, including one cosmetic model and various 3D printed ones. The final dimensions were decided after provisional sketches that showed it should be feasible.

The simple interaction of pointing at an object to interact with was key from Litho's conception. To identify where the user is pointing, we chose to use MEMS sensors combined with SLAM data from the connected device. The LITHO data is processed through sensor fusion to output an approximation of the position of the controller relative to the connected device. Unlike many alternative input devices, Litho does not require outside tracking from beacons, nor does it require the user to keep their hand in view of the camera. This allows usage in many more scenarios.

Combining the necessary electronics to enable this functionality with the final form-factor was an iterative process. There were two major iterations in the final shape: we started with a proof of concept with a thin, flexible PCB on one side, connecting to a main PCB with the rest of the components on the other side. These early, slightly over-sized prototypes proved that functionality could be achieved with the selected components, and this allowed software development to keep moving.

Next, we went through a later prototyping-early DfM phase. Assembly was long for the early prototypes and some were failing because the touch surface was not responding. We knew that putting as many components as possible onto a single rigid board would make assembly easier and reliability higher, and also give us more room for a larger battery. Unfortunately it also made the PCB layout much more challenging. This was complicated by the need for an antenna for the Bluetooth connection. We also had height and thickness restrictions because of the the 1mm glass surface, and 1mm PCB thickness set by the antenna we were using. After an exhausting two weeks of PCB and mechanical CAD layout, and an agonising two-week wait due to the complex board requirements, we had a set of PCBs, stencils, electronic components, chassis parts, fingertips and glass.

It was technically feasible and we went ahead with a design. We hand-placed a set of 20 boards in the run up to Christmas 2018, and did final assembly. Everything worked and assembly time per unit was substantially lower. This new iteration didn't have any of the unreliability issues that the previous prototypes had. From there, we started working with our manufacturer to gear up for production.

Alongside the firmware development, our Head of Software, Lewis Jones, developed a toolkit of interaction prefabs and UI menu presets to enable AR content creators to realise their own vision for the future of spatial computing. Litho's Software Development Kit is made for Unity - the real-time 3D game engine used widely by XR creators. The SDK gives developers everything they need to create AR apps. We also created a LITHO iOS app for non-developer users that distilled the playfulness and magic of augmented reality in contemporary VFX renderings and earlier science-fiction imaginings. In the app the user can spawn balloons that make objects float, planets that have gravity and breakable transparent glass boxes.

Making Litho cross-platform was important to us from the start. The Unity SDK lets developers build for both Android and iOS with once click giving many more people access to AR experiences through their smartphone as opposed to an expensive HMD.

Litho's battery life allows for at least 8 hours in active use and 2000 hours on standby. Litho is always on - a decision taken to suit intermittent or extended everyday use.

With the production hardware finalised, we did a press launch in early 2019. LITHO was widely covered by tech news outlets online and we received 600 applications for the Beta Program. Tech Crunch called Litho 'an innovative finger-worn device that provides control over various spatial interactions' and The Verge called the device 'sci-fi jewellery…a precise, flexible mobile AR interface that doesn't block your view".

In Summer 2019, we began manufacturing the batch of 2000 LITHO devices. We launched the product online at $199 in September 2019 and shipped hundreds of devices in the first few months. We also set up an online community for support, feedback and software ideas which now has over 300 users. So far, LITHO developers have made applications for picture framing, manufacturing, art and designing space crafts. We are now focused on building an app for non-developer users to create their own original AR content.