The culmination of an independent study with five passionate student designers. Form-Y was a test of our abilities as a team and as individual designers. With one semester we were able to completely design a wood bicycle from scratch and create a fully functioning prototype.

This form study fully demonstrates our capacity in many fields.
Our goal with this project was to create a fully functioning design instead of a concept. A lot of designers our age rely solely on concepts of work that may or may not be impossible. We decided to focus on creating not only a great concept but a great product. A comfortable ride, an elegant stance and a statement in materiality.

What emerged from our semester of work was a working product that we are all very proud of. We managed to create a new design and aesthetic that is not common in the bicycle industry. Form-Y is a rideable concept piece that completely changes the feeling of what a bicycle could be. It delivers a hand made experience with the performance of a road bicycle. With integrated brake lines, hidden custom quill seat post, and Gates Carbon Drive, Form-Y is one of the quietest rides possible on a bicycle. Complete silence and shock absorption through the wood make for a ride that cannot be found in traditional bicycles.

This product addresses the question: why wood? There are many materials that are easier to work with and can be machined in many different ways. Wood is not an easy material to work with and is normally reserved for hand made products. However, the mastery over woodworking shows a certain dedication that is hard to see in machine fabrication. There are imperfections and marks of the craft in each piece. Form-Y is a bridge to the modern world that unites modern design and woodworking mastery. While being able to fabricate a product correctly is essential in Industrial Design, there's no better way to read someone's dedication to their field than to have something handmade in your hands. We hope to make an impact in the industry in the future and this is one of our first big steps to showcase what we will be able to do. 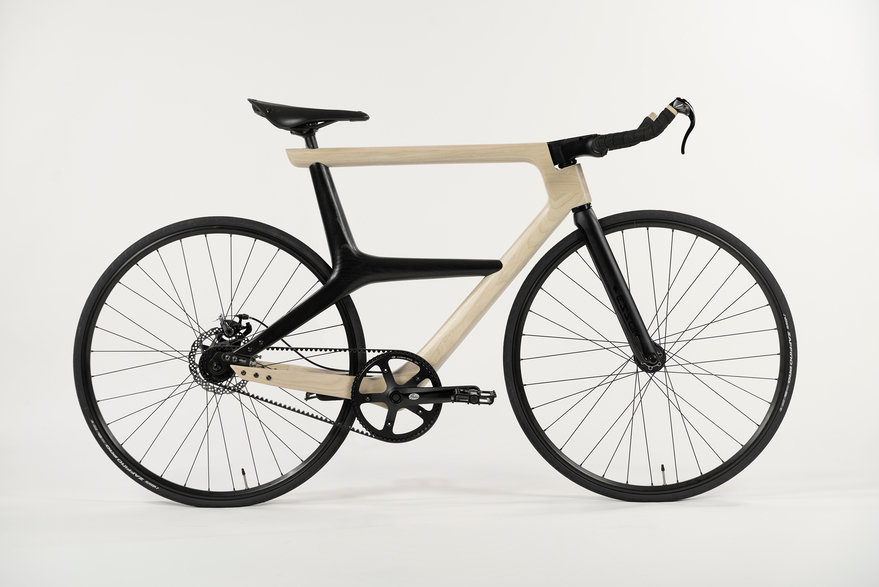 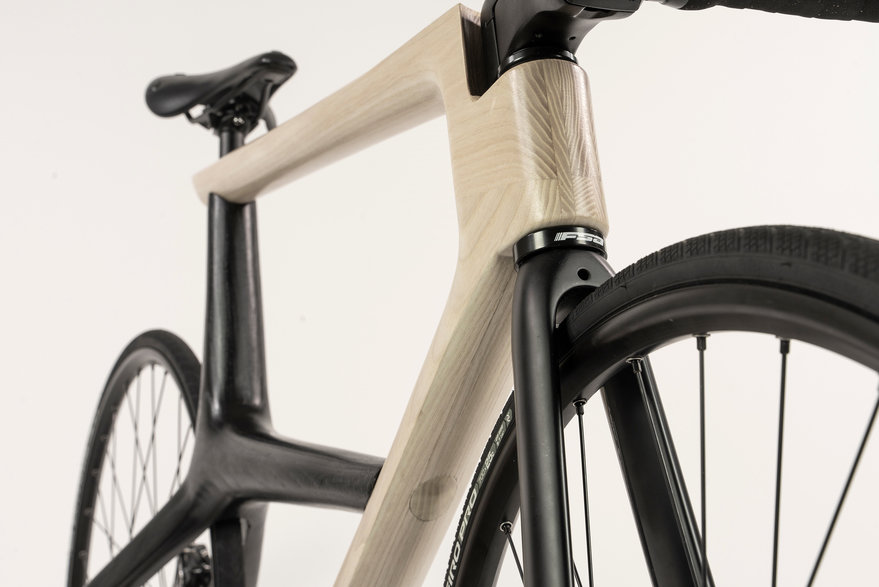 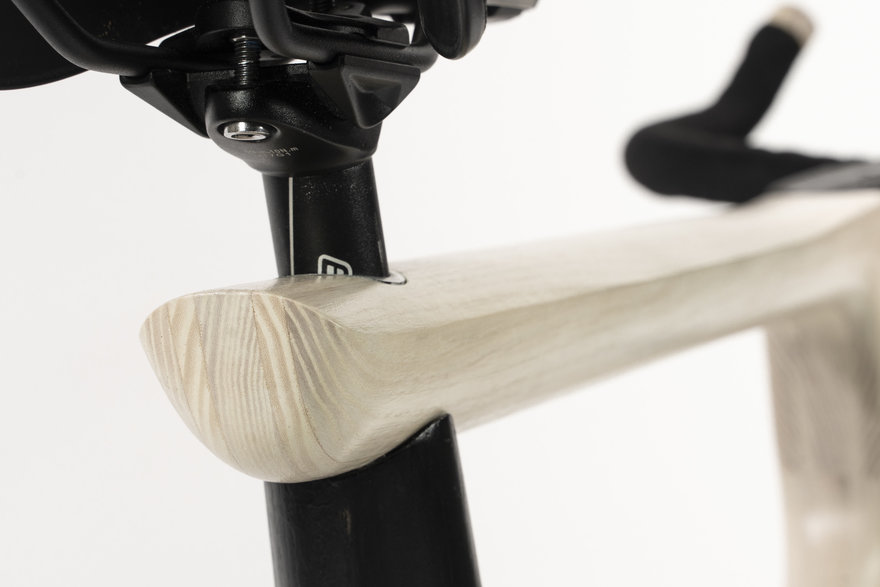 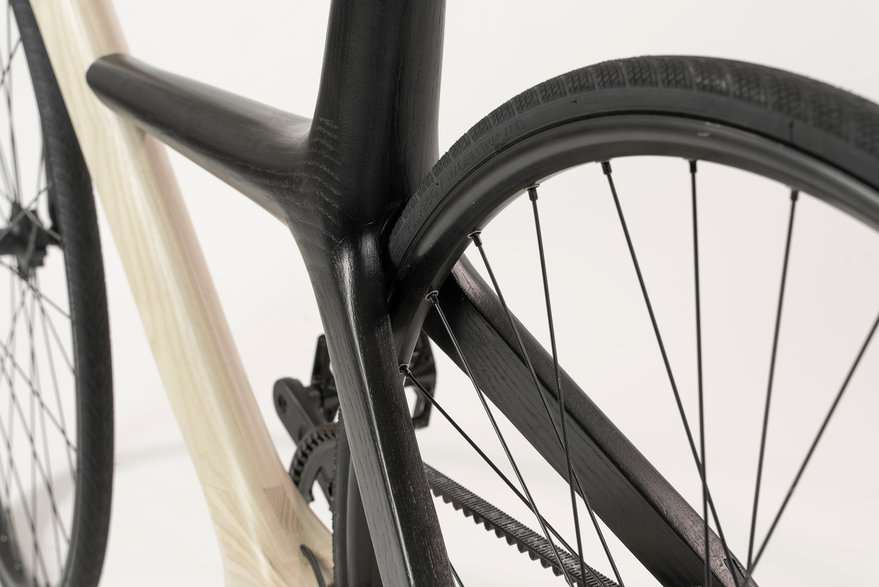 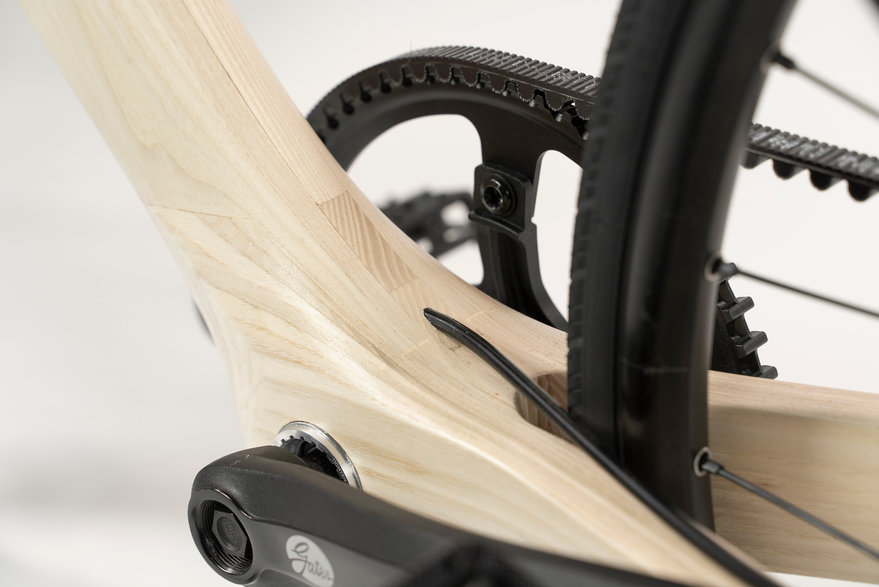 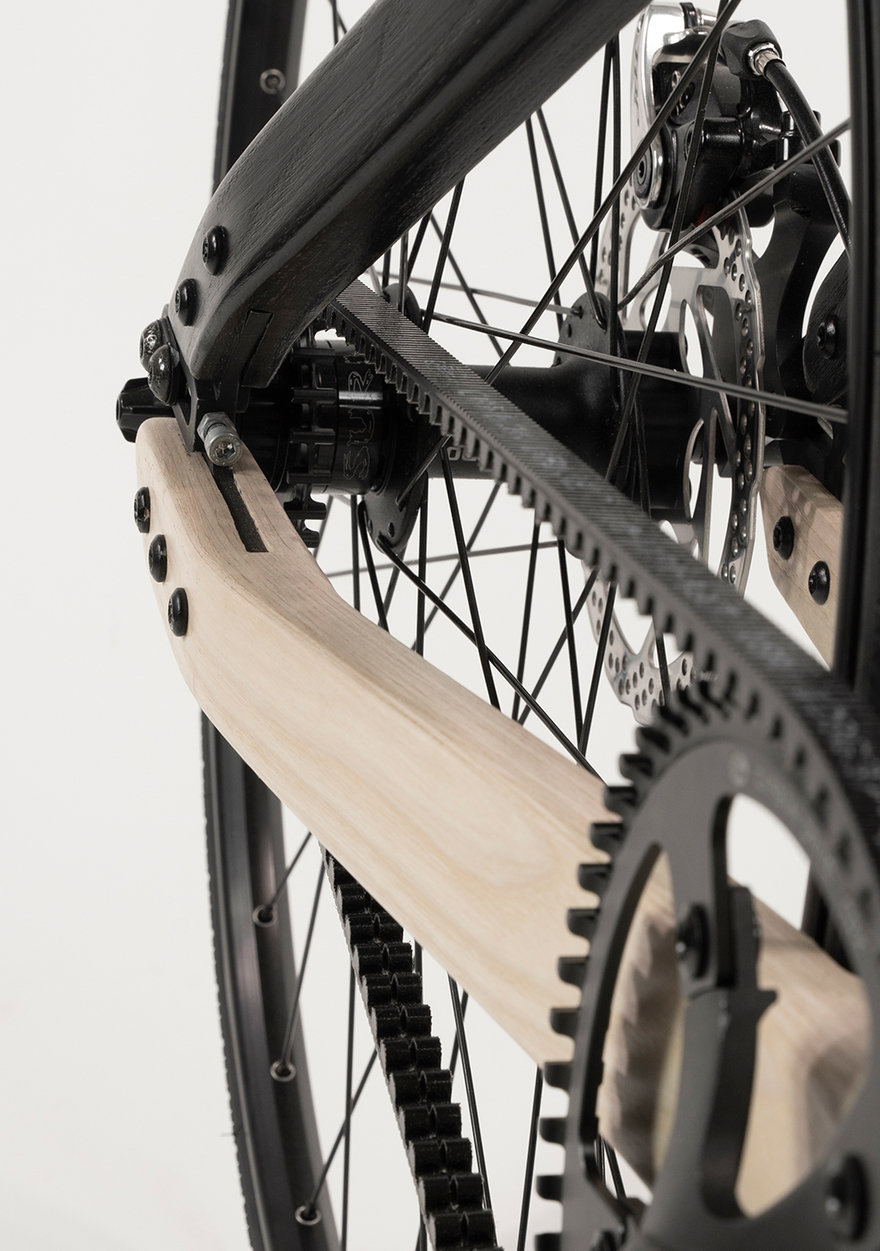 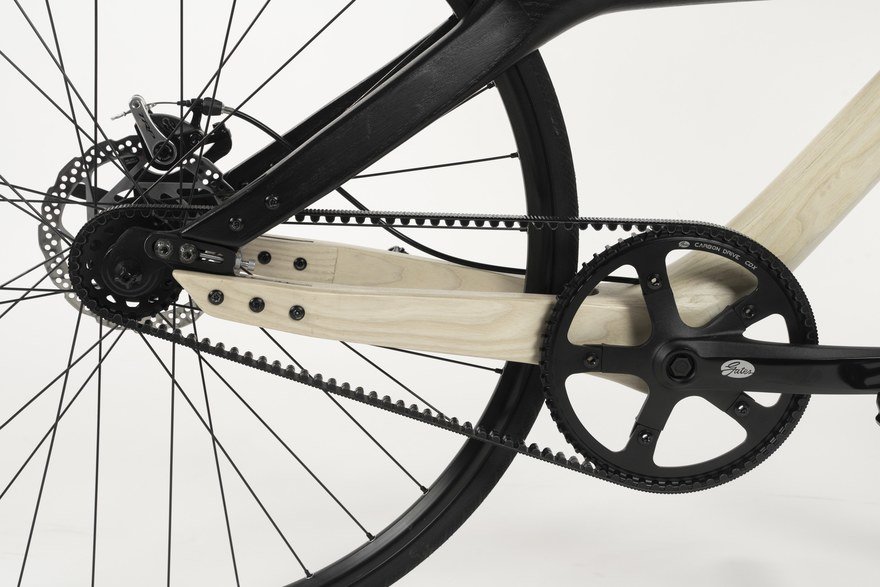 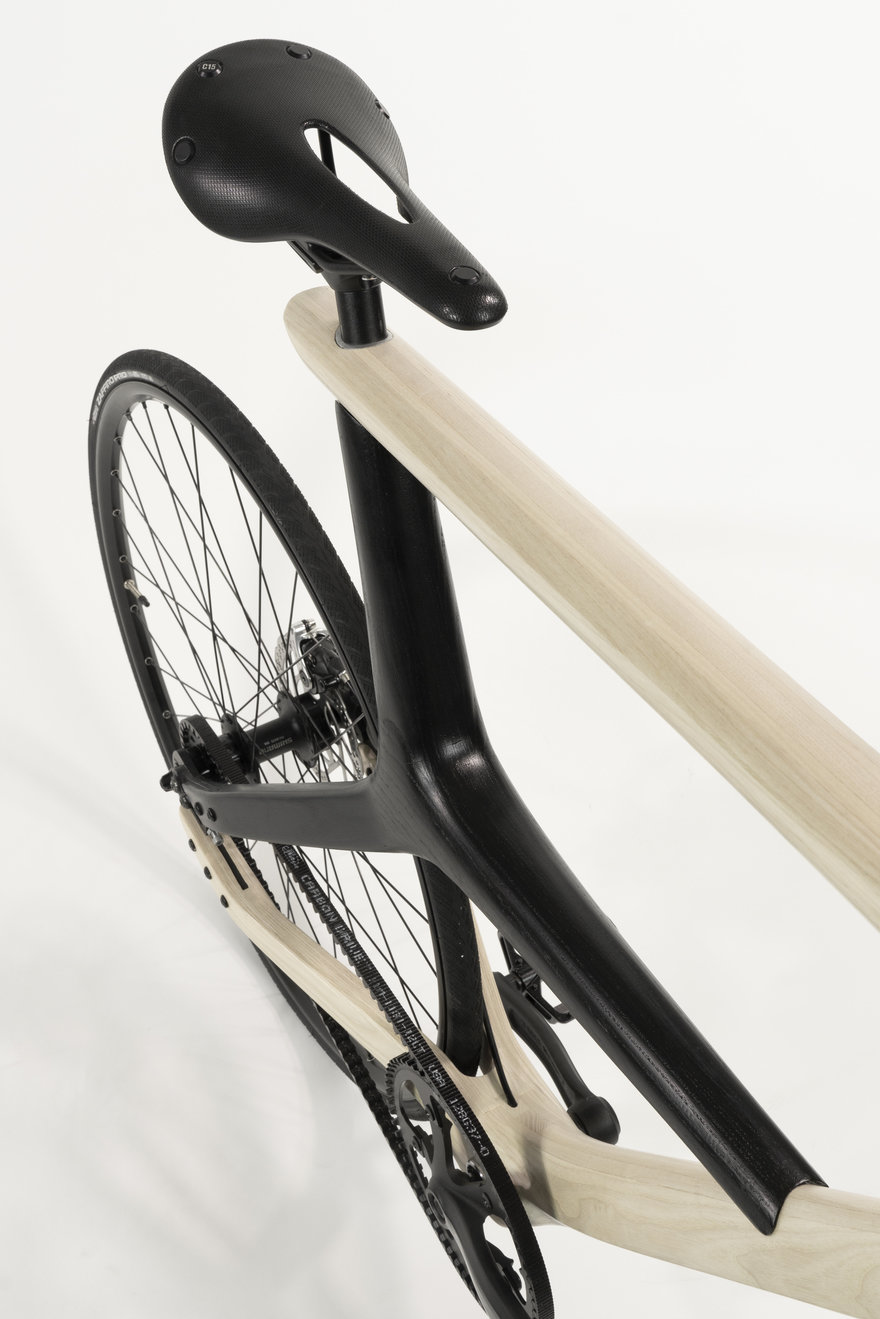 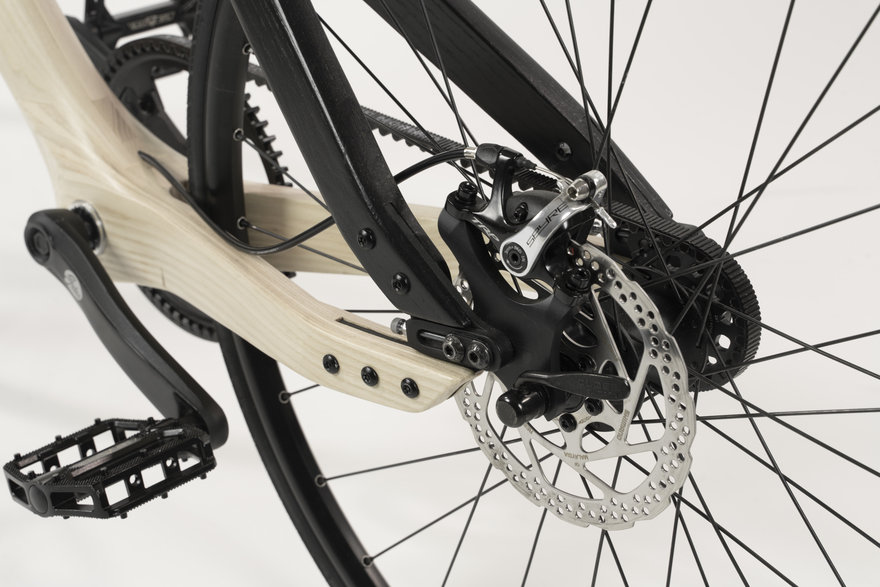 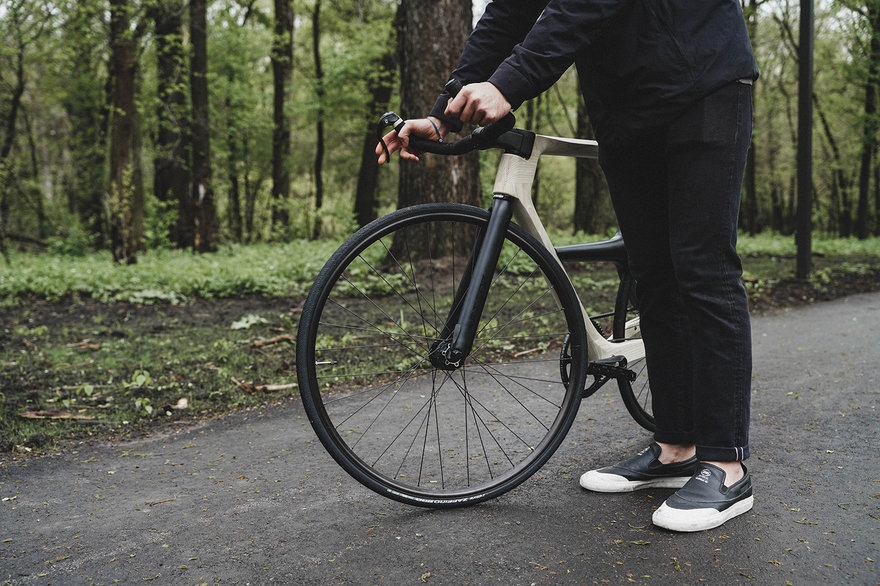 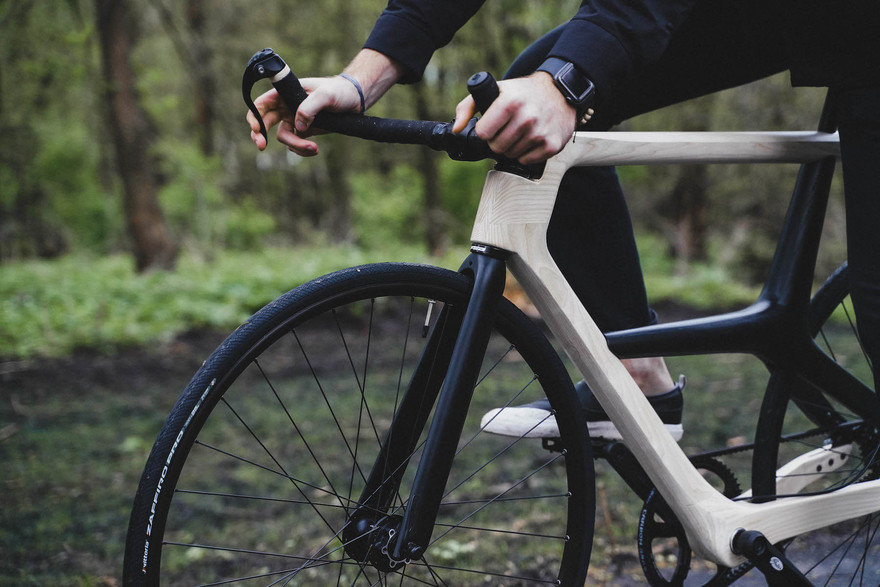 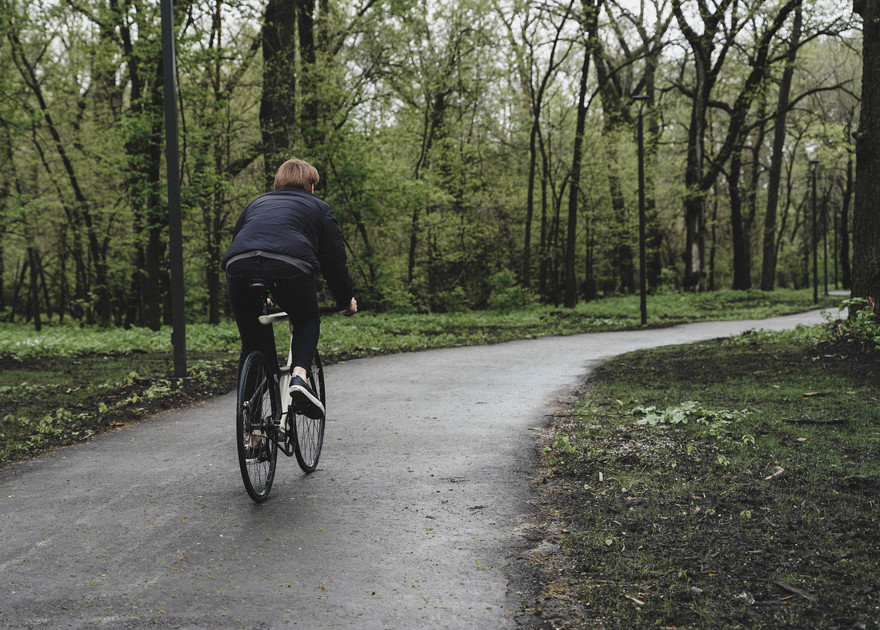 Our design began with the idea that we had to create something different and difficult. With any other bicycle, metal and carbon fiber take priority to allow the designer to quickly build a hollow tube in any shape they want with incredible strength. We chose wood because of the message it would portray. Creating a bicycle frame with a small student design team not only shows that we are not afraid to challenge ourselves, but that we are completely capable in the engineering process as well. If we can make a working bicycle design from wood, we can work with almost any material in the design field.

Everyone on the team had different ideas of what the bicycle should look like. So we began with determining what emotions the bicycle would convey and what styling would fit the potential buyer profile. We wanted our bike to be minimalist, elegant and comfortable while not becoming an art piece. It had to be something that you could use on a commute within a city and not look completely out of place while making the rider feel like they have invested in something unique and handmade. It had to be a piece that connected rider and craftsman, something that manufactured steel cannot do.

Much of our early work on Form-Y consisted of finding forms we thought carried simple elegance. These forms would be used for our idealization later on in the process when it came to shaping the wood. Our sketches came from simple line drawings of unique shapes for the side profile of the bike. We continued advancement in fidelity until we found the profile we were looking for in both colors and materials. The team decided on using ash wood because of its extremely blonde color and strength properties. We wanted our work to stand out from the rest of the components on the bike so we separated the colors into two colors that would help focus the eye on our craftsmanship. White and Black.

The final bicycle design chosen by the team maintained the survival form of a bicycle while adding an element not seen in many designs. A step away from the traditional seat stay design and a step into territory that created a much more complex shape. A wooden black Y in the middle of the frame.

Our build became complicated when dealing with the joinery of the wood. Because we wanted to maximize the strength of the outer frame we had to consider grain direction and how we wanted to connect all the pieces. Instead of connecting large chunks of wood to each other, we went the route of overlapping 1/4" and 1/2" planks of ash to create an interlocking system that would increase the strength and also correctly position the grain direction. The attachment of the chain stays to the main frame was a delicate dance of measuring the overall width of the wheel bolts and calculating the thickness of the dropout when it would be finally installed. These measurements were based on the chain stays since they were bent laminated and moved slightly due to the natural flex of the wood after it is released from its mold. If any of these measurements were off the wheel would not fit correctly and the entire dropout-chain stay assembly would be rendered useless.
?
We wanted to create not only a strong frame but a functional one. Our entire design revolved around positioning the front handlebars flush to the top tube. This meant that we planned on running the brake cable to the very back of the bicycle through the downtube. Since we were making a completely solid downtube, we needed to hollow out space where the cable could run through. Hollowing out the middle plank of ash allowed a space that we could access later by drilling straight to that point and run a cable throughout the downtube. This design element is capped beautifully at the bottom of the downtube and the brake cable is run internally through the handlebars.

The middle piece meant to keep everything connected was jokingly called the Y-Wing until it stuck. This piece was the most difficult piece in terms of engineering and woodworking. Not only did it have to contact the front of the frame, but it also had to serve as a seat tube and seat stays for the wheels. This piece hides because of the black appearance but in fact, it is the sole reason the bicycle is allowed to function the way it does. It houses the most precise and complicated joinery of the bicycle and keeps everything perfectly in line while serving as the seat tube.

The awkward shape of the Y-Wing made it very difficult to work with and measurements had to be exact otherwise this component would not fit into the frame. This component had three points of contact: the top tube, the down tube, and the chain stays. The seat stays of the Y-Wing had to connect with the chain stays of the frame while staying flush to the top tube and the down tube. After measuring many times, it ultimately came down to how well we could approach the flush connection between the frame and the Y-Wing using hand tools.
Similarly to how we did the frame, we layered multiple planks of wood setting them in the best orientation for glue adhesion and overall surface area of the bond. With precise cuts, chiseling and hand finishing, what came out of was an extremely strong structural centerpiece for Form-Y.

One of the most important parts of the bicycle was the thin seat stays and chain stays. Usually, these parts of the bicycle can be made very thin with aluminum or steel tubing. This is not the case with wood. We also had to consider that we were designing dropouts to connect these two elements so the wood had to be strong enough to hold this part in place. We constructed our seat and chain stays by cutting extremely thin veneers from the ash down to 1/16". These veneers were then glued and placed in a mold that held the form that we wanted. What came out were strong pieces that would serve as our seat and chain stays once attached to the main frame body.

Because of the nature of the belt-driven aspect of the bicycle, we had to completely redesign the dropouts of the bicycle. Since the belt cannot be separated as a chain can, the frame has to be able to open to allow the belt drive in between the seat stays and the chain stays. We engineered and CNC machined an aluminum dropout to perfectly match our designed frame. This dropout design lets us adjust the tension of the belt while allowing us to quickly remove the tire if needed.