VICEROY - A GENTLEMAN'S HIDE OUT

VICEROY Yacht is the naval equivalent of a cabin in the woods. Focussed on the many masculine aspects of contemporary escapism, VICEROY Yacht embodies the fusion of cutting edge technology, luxury and environmentalism with the comfortable mess and pervasive odour peculiar to a man cave. 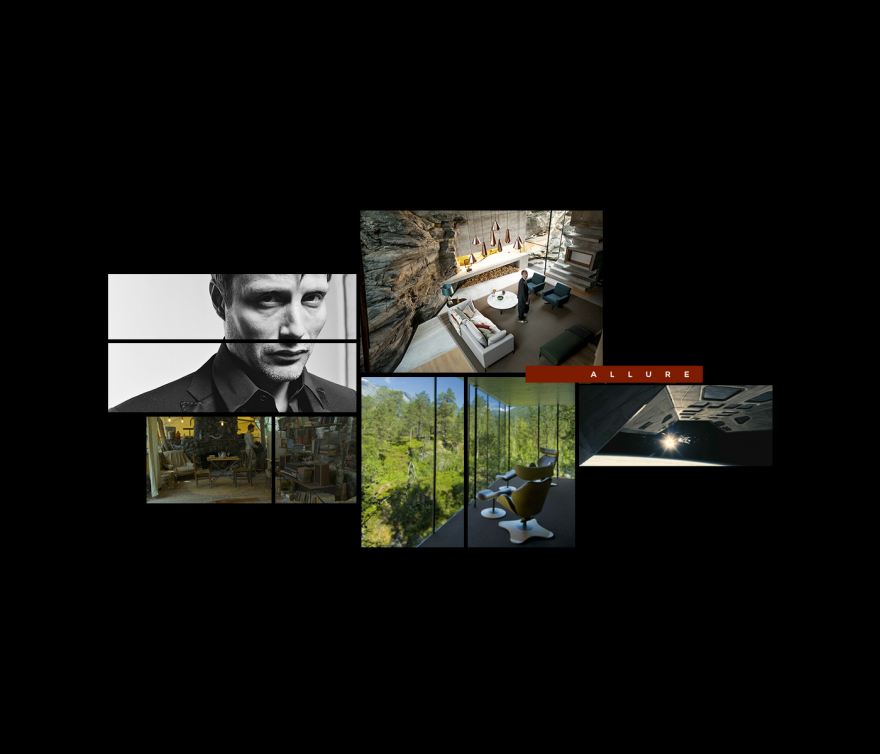 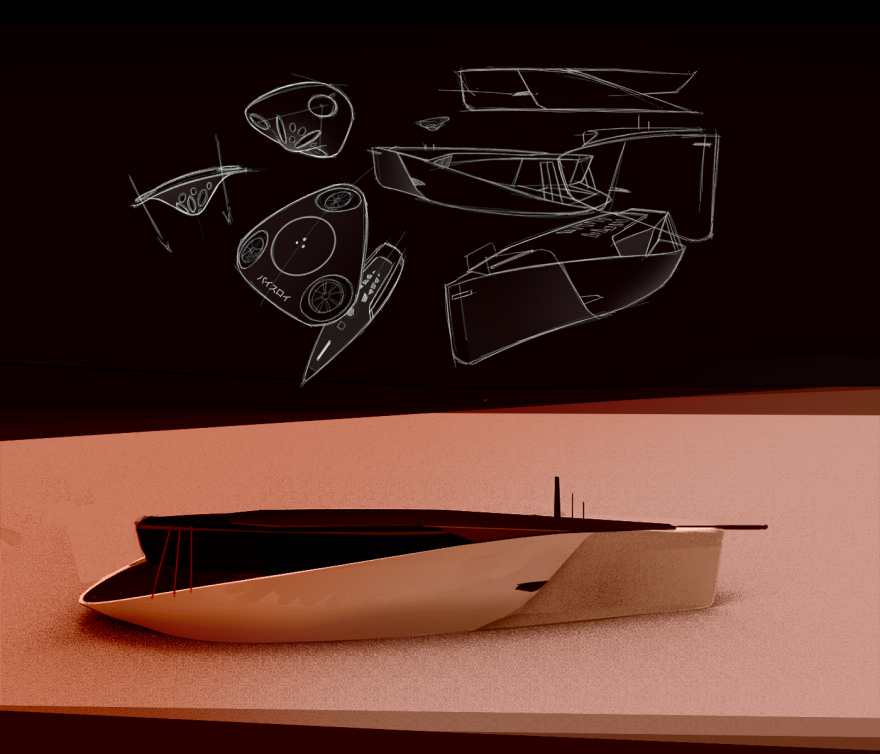 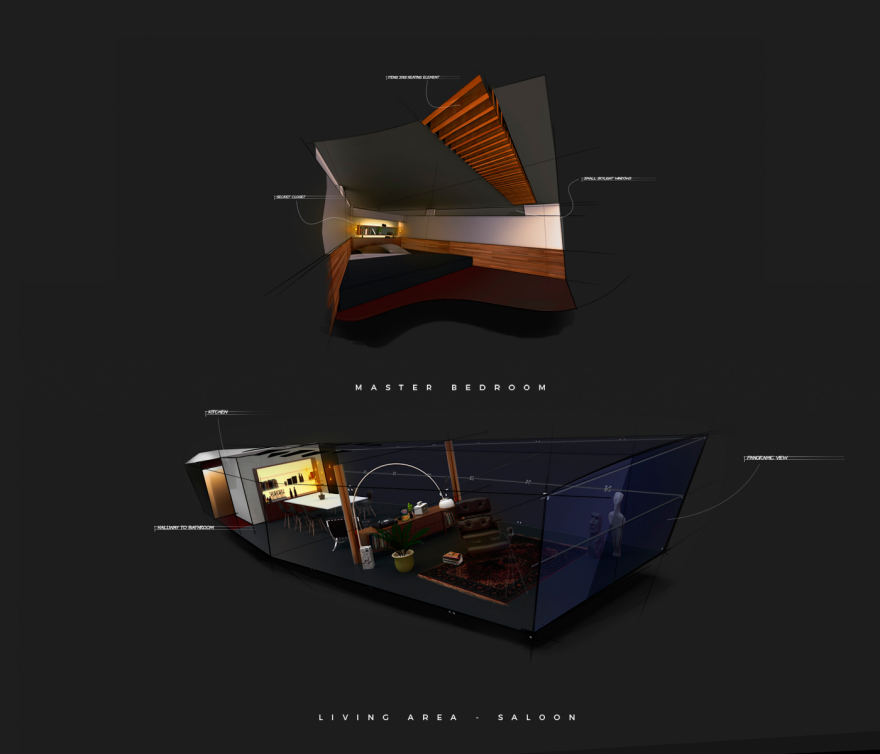 VICEROY Quarters Some concept sketches for the interior 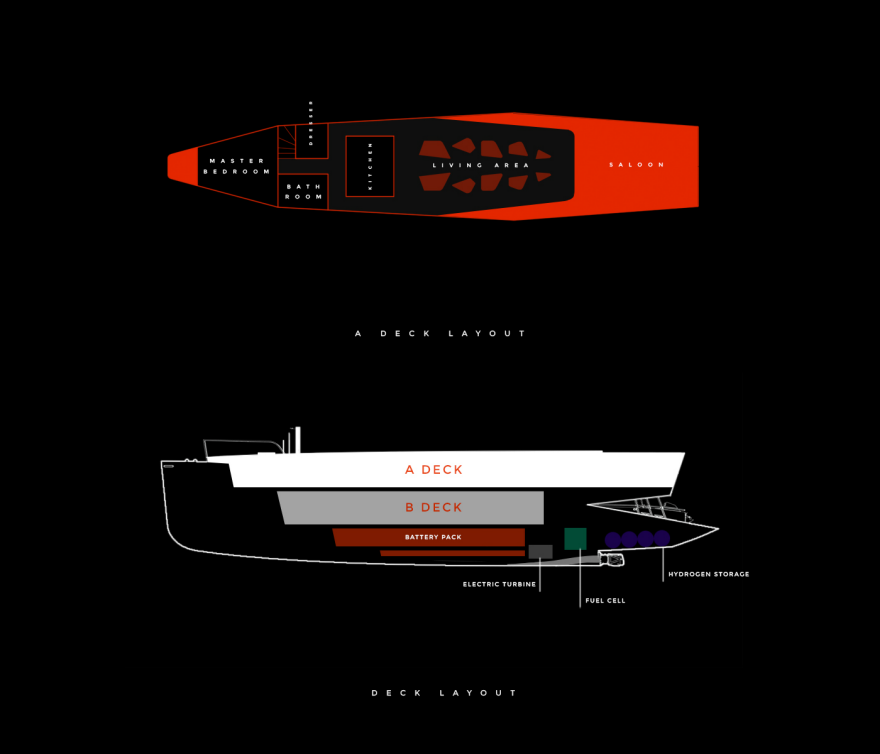 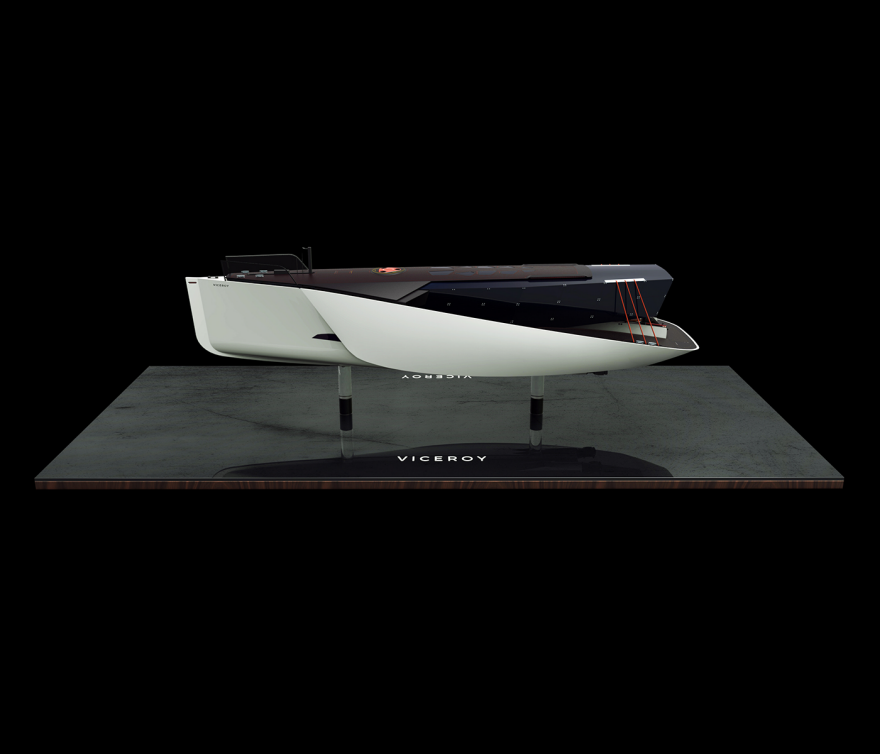 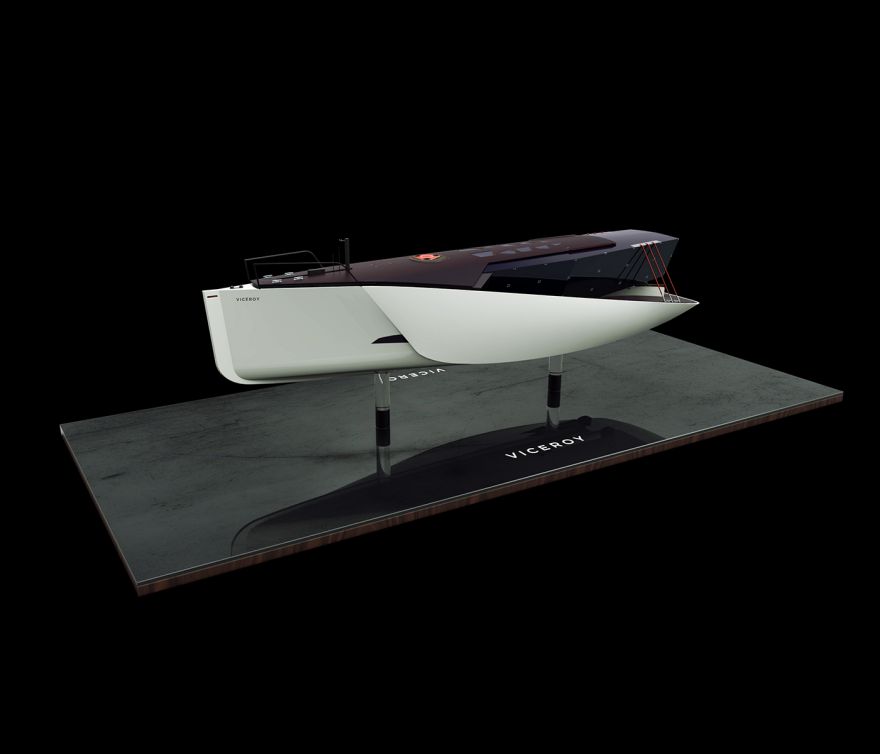 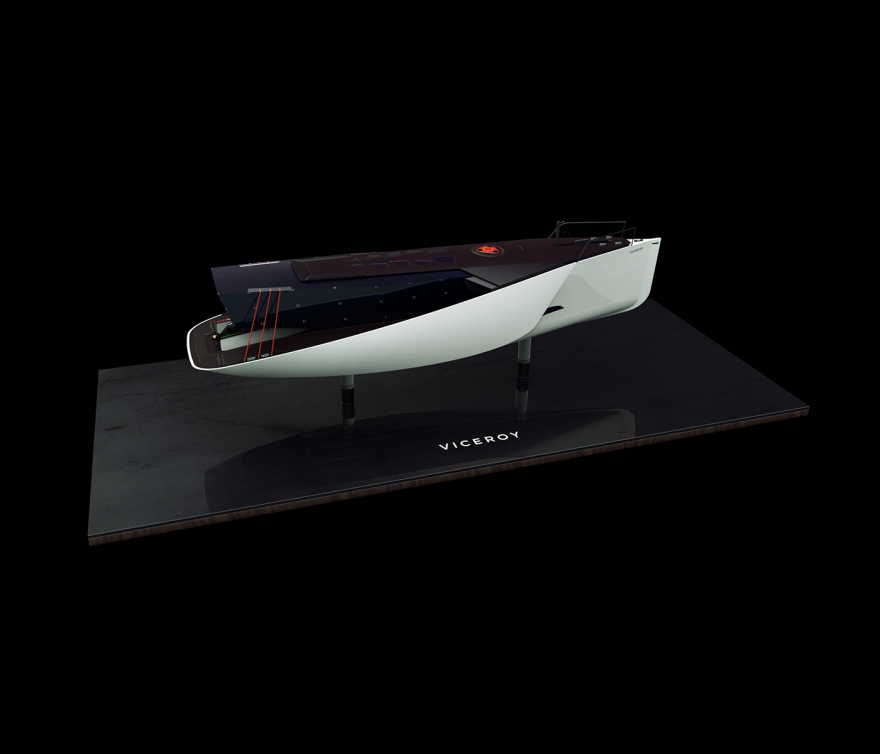 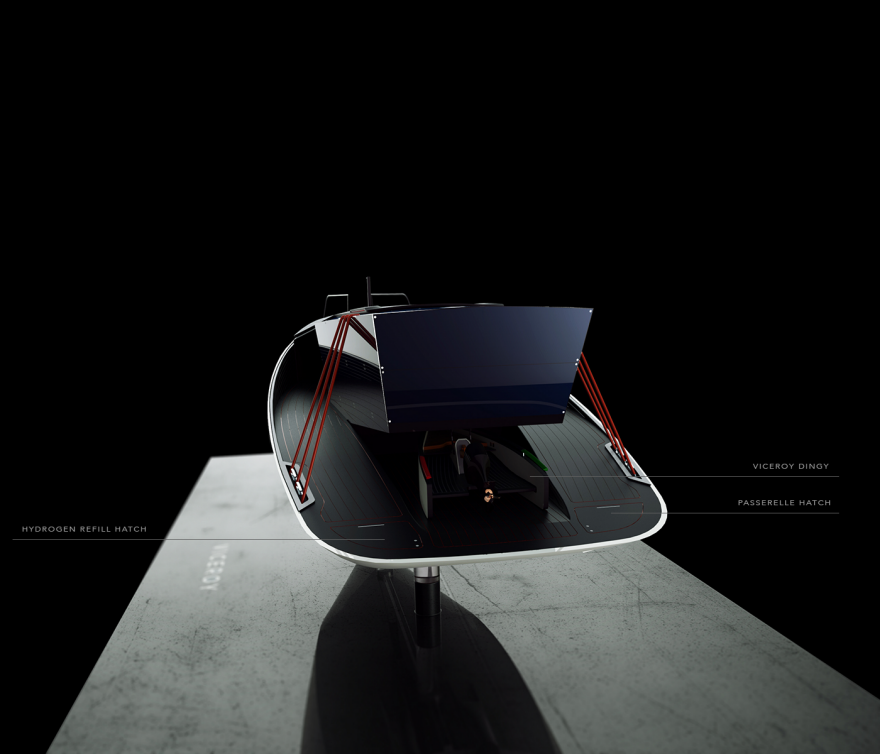 VICEROY DINGY Garage The architecture optimises use of available space 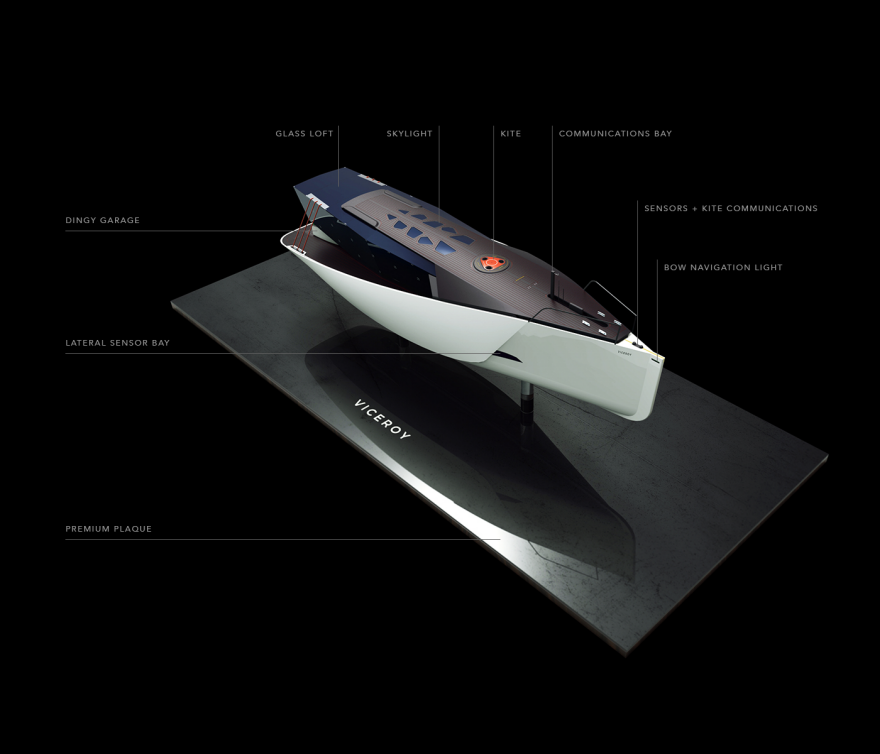 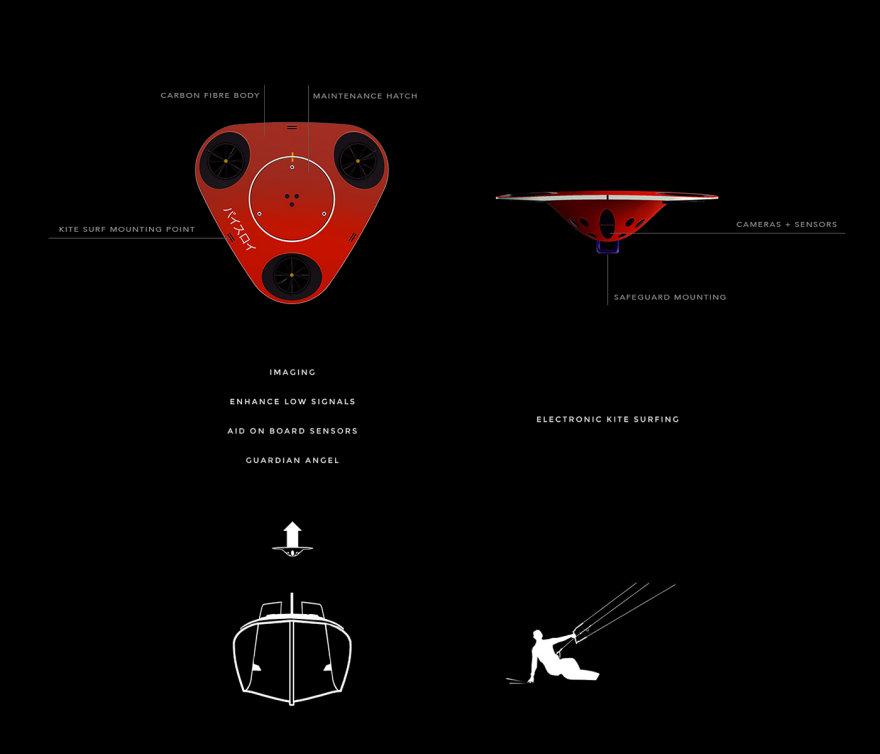 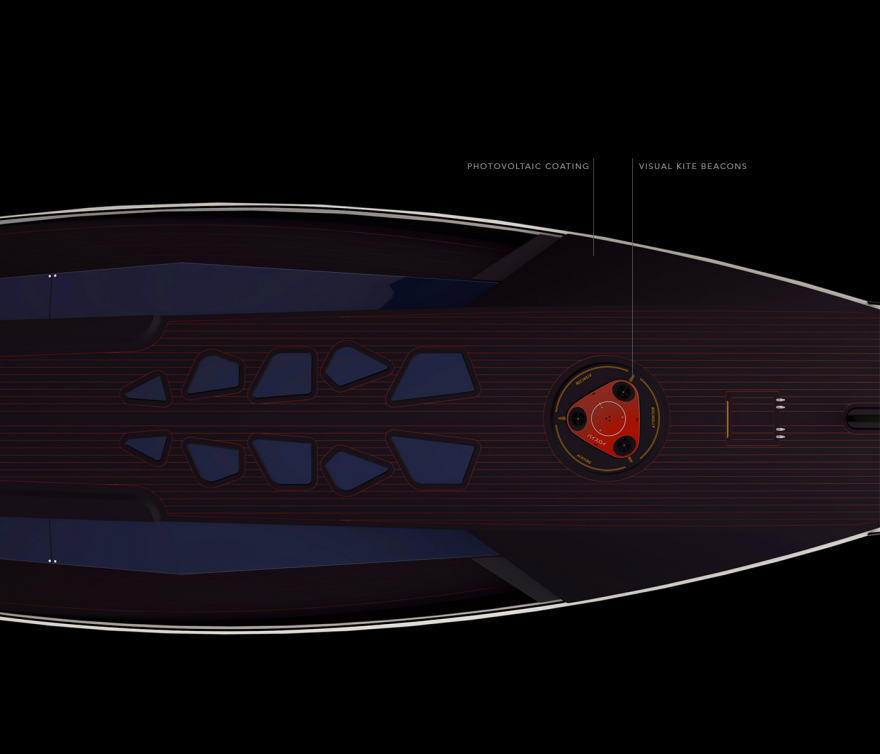 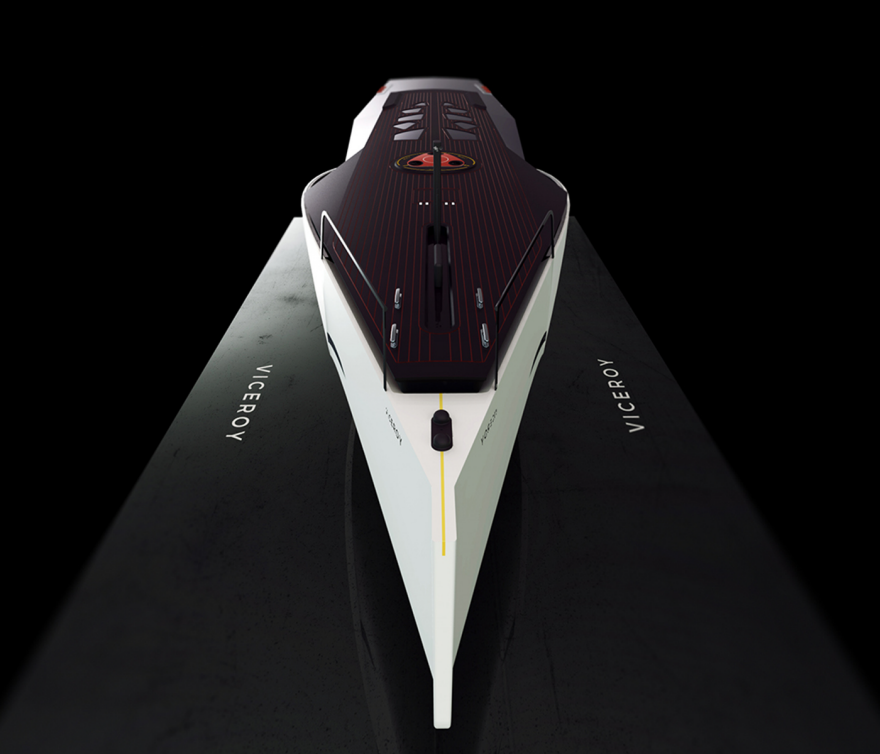 In a bid to flee from the many hassles in everyday life, men have been turning into the woods for centuries. There they would build cabins, or man caves, if you will. Built in a place close to the heart and deep into somewhere, a quiet shelter offers peace and warmth to those in need of a good old dose of manly escapism. VICEROY Yacht is the epitome of the gentleman's hide out. And it comes in the form of an electric yacht: the concept is a welcoming invitation to take a step back, to unplug and take a break from it all. It is a floating loft full of technology, luxury, toys and doses of stinky manliness. It is the ideal environment to disappear in, to indulge yourself like only you know how. A place to be who you are, to reflect in, or to just have a good time with your pals.

The yacht had to look and feel like one of those modern hotels, where architecture and nature beautifully blend together through design and use of materials. Boarding VICEROY Yacht should feel like stepping into a protecting environment, where everything is taken care for without you even knowing what is there to take care of. In line of this philosophy, VICEROY Yacht is an autonomous vehicle or drone boat. The vehicle comes without a dedicated cockpit or bridge, as it is controlled through a central computer which takes care of interior automation, navigation, mooring… With VICEROY Yacht, it is child's play to take control: travel routes, destinations or other settings can be submitted to the yacht's mainframe through your personal mobile device of choice. The central computer acts like Tony Stark's J.A.R.V.I.S. artificial intelligence computer. Taking care of everything, the computer is more than a mere steersman: it is paramount for the establishment of that comforting vibe VICEROY Yacht offers.

VICEROY Yacht is equipped with a full Hollywood-style Control Room on the lower deck. In the Control Room, information from all of the vessel's sensors is fed through numerous screens and enables the captain to overwrite and take manual control of the yacht in case of emergency, storm or other situations where manual input is required. VICEROY has an emergency setting to quickly escape from any dangerous situation, in which case the occupants will be asked to enter the Control Room. The room is fitted with a total of three leather racing seats, allowing the occupants to survive heavy shocks when travelling at high speeds.

A manly haven is packed with toys. VICEROY Yacht features a modern, high performance dingy, room for an additional jet ski and a state of the art flying drone: KITE. It sits in a dedicated bay on top of the yacht. The bay doubles up as a chimney for the kitchen, which is located directly below. The KITE Bay is fitted with induction pads to quickly charge KITE when docked. The drone itself serves a double purpose: on one hand it is an expensive high quality toy, fitted with cameras allowing you to take selfies when sailing through the seven seas, or acting like an electric wind kite for kite surfing. Imagine the killer shots that will produce. On the other, more serious hand, KITE is a vital part of the yacht's autonomous guidance system. In situations where the yacht's on board sensors cannot get sufficient data from its surroundings, KITE will automatically deploy and use its array of sensors and cameras to successfully guide VICEROY Yacht along whatever obstacle.

The British at Rolls Royce call it 'waftability', VICEROY calls it 'a gentle push'. VICEROY's power house is made to measure the yacht's purpose: to provide enough power to not be a slouch, but other than that nothing excessive. Wealth comes in many forms, and power should not be proven. VICEROY Yacht runs all electric. A small but efficient hydrogen fuel cell is the main power source to charging the batteries, that are stacked in separate modules as they are in a MacBook Air, to optimise the use of available space. Sitting in the yacht's lowest point, the centre of gravity is kept as low as possible. The hydrogen storage is located beneath the Dingy Garage, at the yacht's widest point. The fuel cell, however, is assisted by photovoltaic cells embedded in the surface finish of the top deck. As with a modern electric car, the yacht's on board computers will, at all times, make sure the yacht never falls short of power. The navigational settings are fairly conservative in this respect, as it would categorically not look good to be stranded in your shiny VICEROY Yacht.

VICEROY's key sketch revealed the promise of a stealthy but dynamic looking vehicle, with its living quarters laying semi-exposed. The central glass loft, housing the living quarters, ducks away into the ship's hull. Starting out with the concept of a 'hide-out drone boat', some interesting design opportunities opened up. For instance: there would be no need to incorporate a bridge or cockpit area. The entire main deck surface could this way be tailored for living, with minimal space to be sacrificed. The ship's design had to communicate a sheltered environment that, at the same time, allows for being in tune with nature around. It is interesting to note that, however stand-offish the yacht looks from the outside, the interior and very rationale had to communicate quite the exact opposite. Charles Eames once described taking a seat in his Lounge Chair as "the feeling of putting on a well-used baseball mitt." VICEROY Yacht should ensure that very feeling when aboard.

The living quarters are arranged according to privacy levels common for each type of room. For example: the Master Bedroom, located in the far bow of the yacht, sits in a space with minimal windows and high side walls. This way, a snug and private atmosphere is created. Moving towards the stern, a bathroom with walk-in shower, dresser, kitchen and living room follow up on each other, with a distinct difference in vibe between the living area and the personal quarters. The narrow glass corridors, indirectly lit and floors covered with thick red velour carpet, open up into the living area, which is distinctly more open in comparison to the quarters up front. A lofty area in the stern with large glass surfaces provides an epic panoramic view over the sea or sunset bay.

One of VICEROY's main design drivers was the protruding glass loft at the stern. While providing an unmatched panoramic view from the saloon, the loft's overhanging architecture creates room at underneath for a VICEROY Dingy garage. This elegant solution maximises the available space on the yacht in the most elegant fashion. The dingy is accessible from the lower deck and is launched from two periscopic arms on each side. Optionally, the dingy can be replaced with two jet skis.

As KITE, the aerial drone, is a fun part of the interactions between human and yacht, it deemed logical to provide the device with a less intrusive design philosophy in comparison to the yacht itself. In contrast to VICEROY's design, the Kite had to have a more friendly stance and appearance, perhaps almost animal like. The measured, angular design philosophy makes place for a flowing, organic surfacing language, roughly inspired by Burt Rutan's planes. In order to match these two distinct design philosophies, the Kite has a triangular silhouette, giving it both an aggressive and sporty feel.

Very refreshing to see a marine design entrant, and one with lovely exterior visuals.

Cool ideas on how users can document themselves on board, good use of transparent materials to enhance experience.