Cycling is the healthiest and most ecologically sound way to get around cities. It is often the fastest as well. Across the world, bike share programs are springing up, giving commuters and tourists a convenient, inexpensive way to move from point A to point B. One of the few issues with bike share is that users very rarely use helmets. No one wants to carry a helmet around all day, and rental helmets can be unsanitary or ill-fitting. In busy cities crashes do occur, and wearing a helmet can reduce the chance of injury or death by 85%.

IO is designed to give bike share users a helmet that can be purchased with the bike rental and recycled after the ride. Its flat folded state is ideal for vending machines and it requires no assembly to put on. Just place on the head, pull down the straps and clip. The honeycomb paper material conforms to most head sizes.

While a few paper helmets exist, this is the first one with a honeycomb structure that folds. The cell structure distributes any impact evenly around the head, protecting it as or more effectively than a traditional polystyrene helmet. Due to the radial nature of the cells, it will protect the user from a blow coming from any direction. A biodegradable coating makes it resistant to rain for up to three hours.

IO is fully recyclable product. Ideally, a special disposal container would be made available at bike rental stations, allowing used IO helmets to be recycled into new ones with minimal waste.

The material cost (recycles paper and biodegradable coating and adhesive) are so minimal that the individual units could be sold for under five dollars or even included in the price of bike rental. 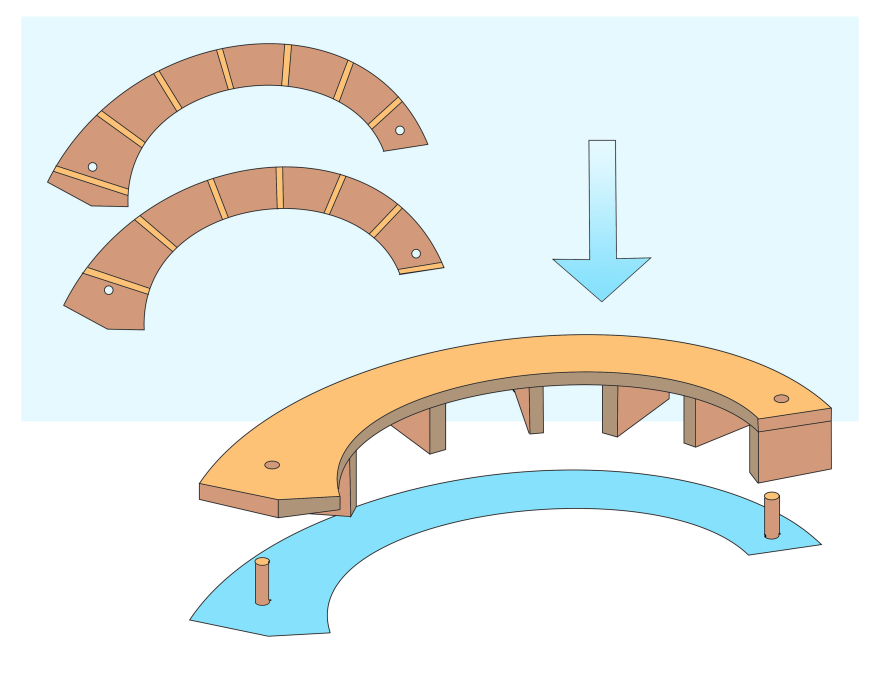 Diagram showing stamp pattern Note that the cells are radial, not parallel as in traditional honeycomb paper. 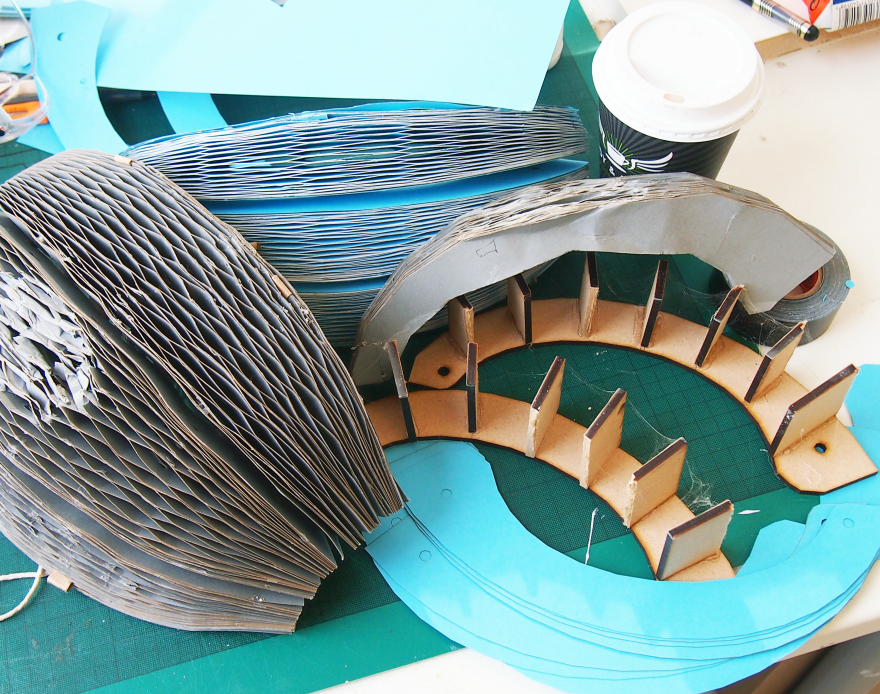 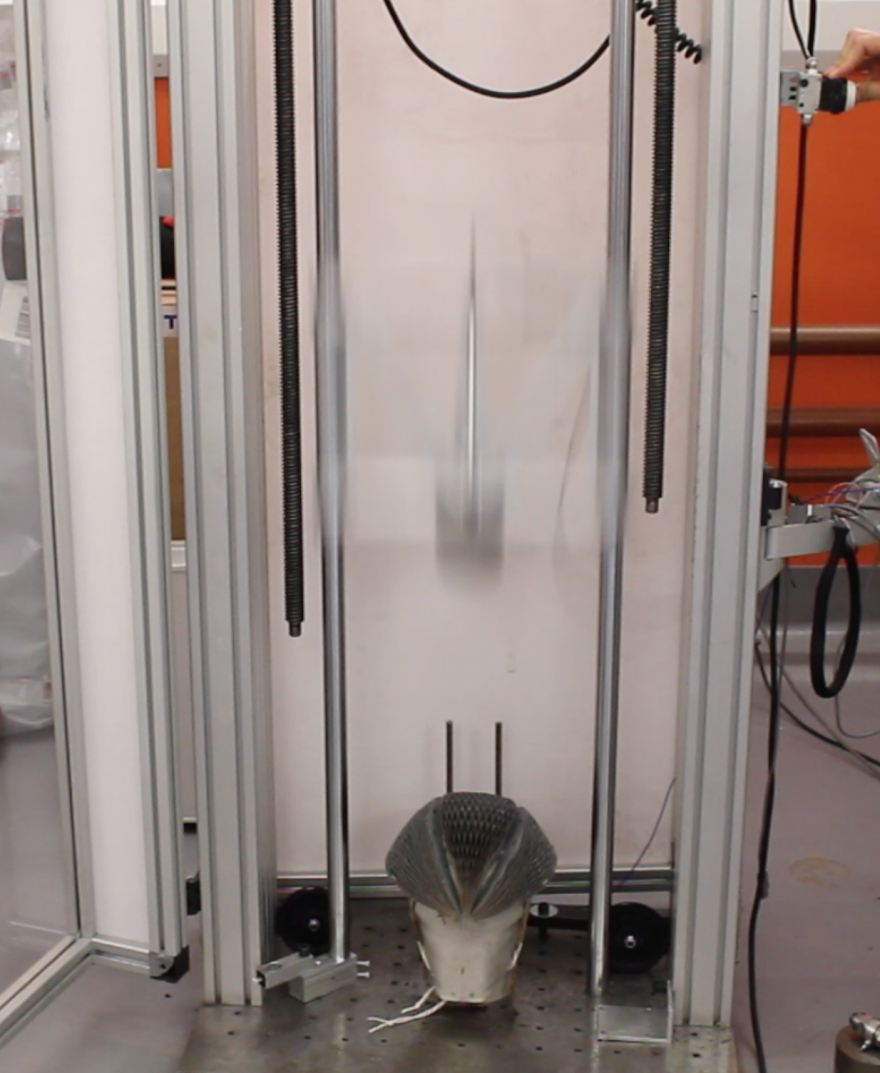 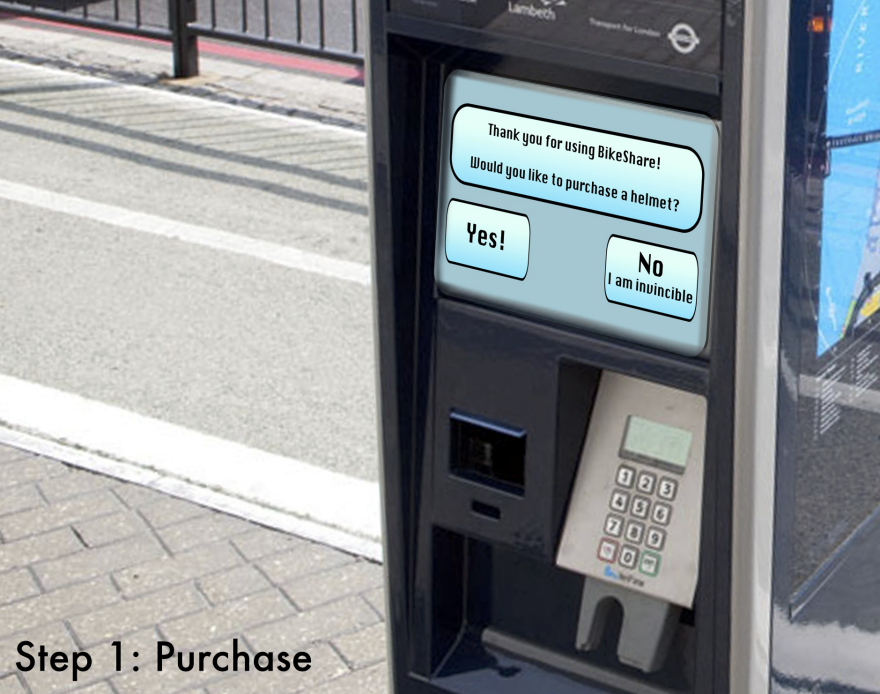 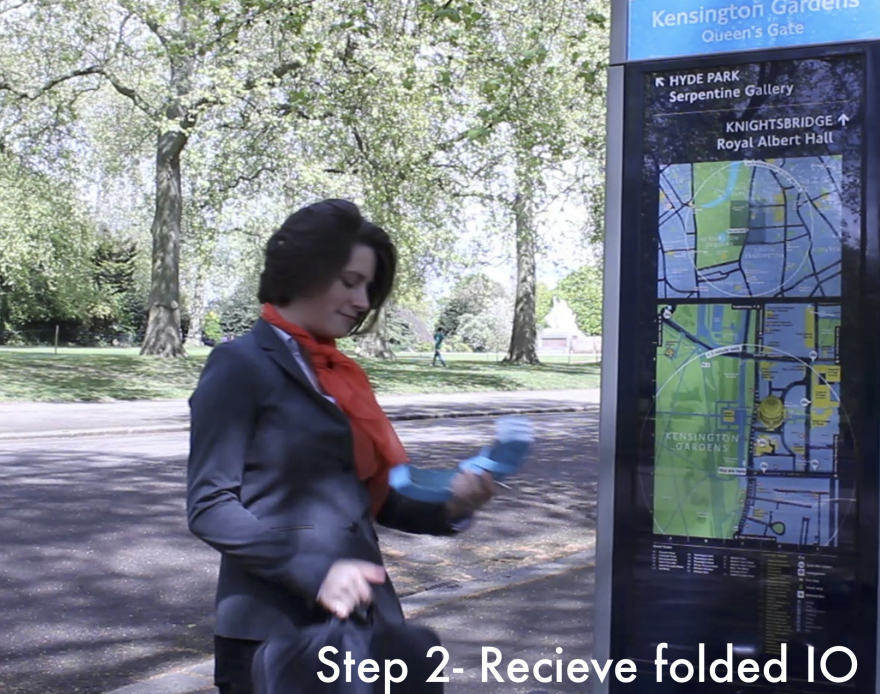 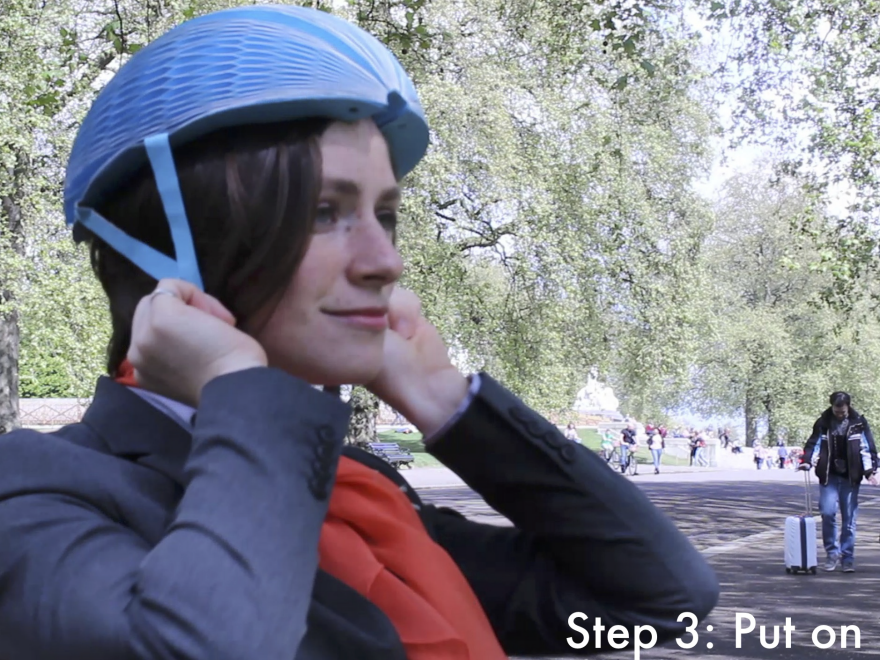 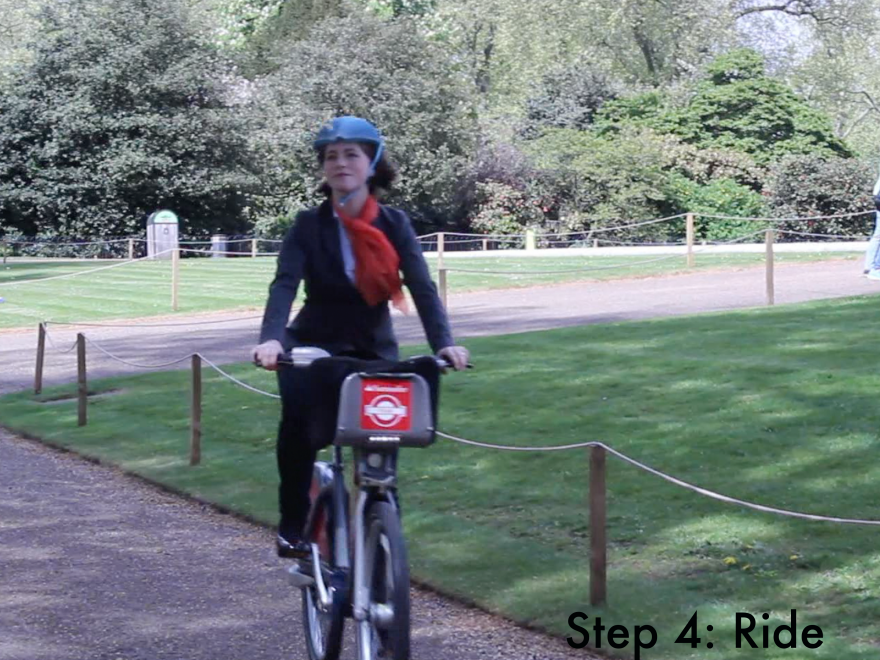 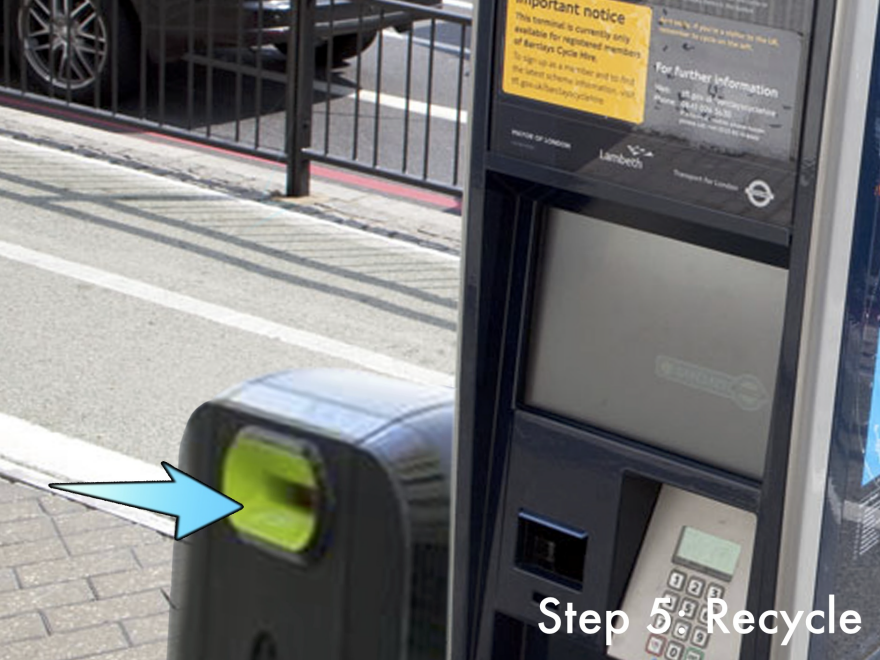 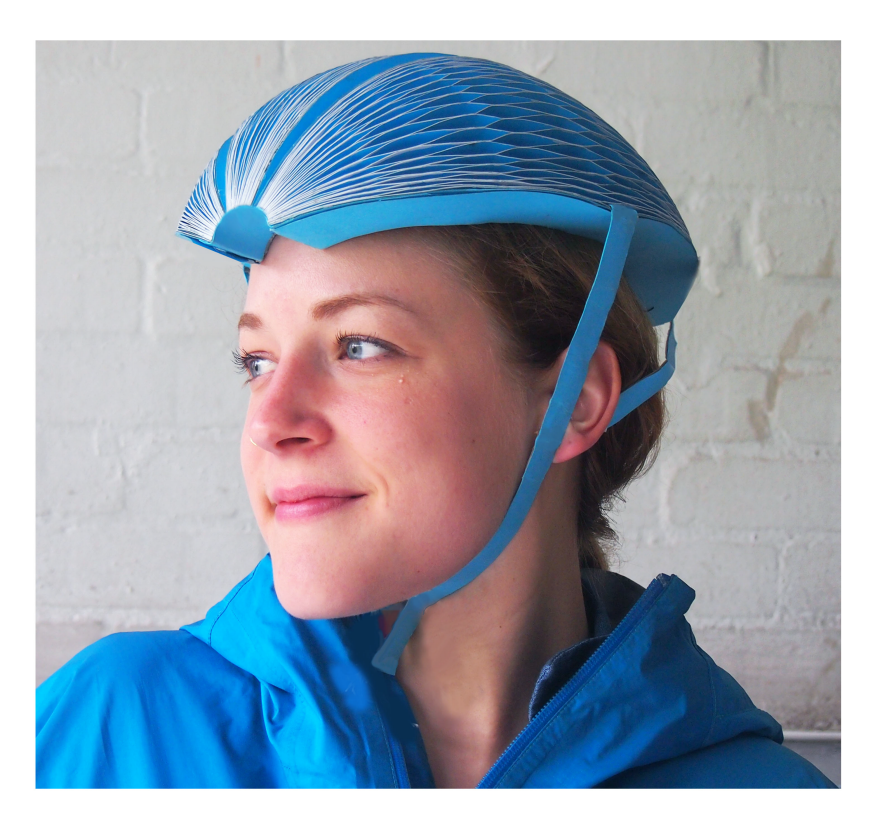 IO in use Model: Hannah Trimble 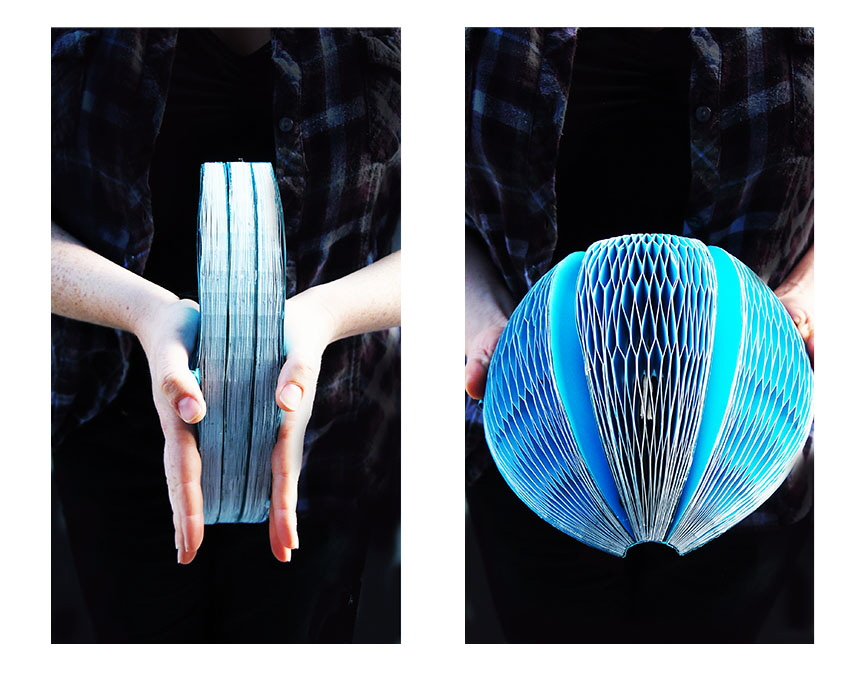 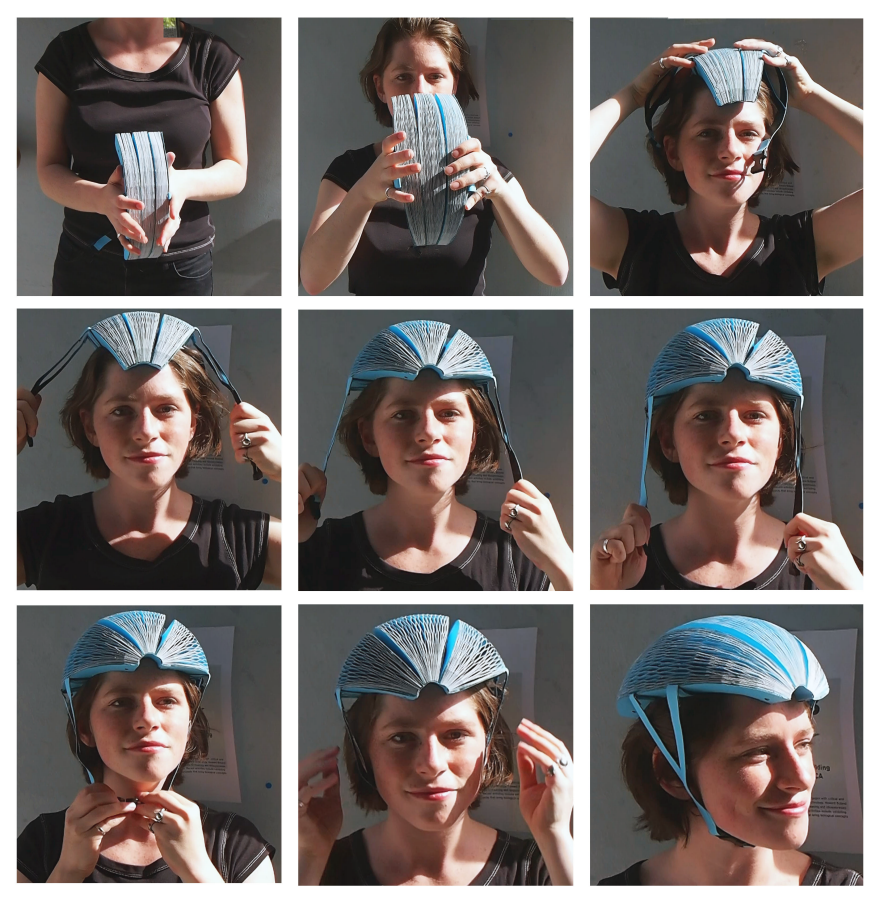 The IO Helmet was born after I got sideswiped by a taxi while riding a Citibike in downtown Brooklyn. I wasn't wearing a helmet, and with slightly worse luck I could have been seriously hurt. As it was, I survived with a bruised dignity and a lump on my head, and I got to thinking- wouldn't it be nice to have a helmet available wherever and whenever I felt like having a ride? Most cyclists grab their helmet along with their bike on their way out the door; what about those spontaneous rides that take advantage of the increasing ubiquity of bike shares in cities all over the world? I don't know anyone who carries a helmet with them all the time, just in case.

There is a raging debate over the efficacy of helmets, with good arguments on both sides. Having seen enough head injuries over the years (and experienced some myself), I am a strong believer in protecting oneself if at all possible. The statistic generally thrown around is that helmets reduce head injury up to 85 percent; one that is a bit more chilling is that of all the recorded cyclist fatalities in NYC, 74% involved a head injury and only 3% of those riders had helmets on.

My first challenge was to find a material that was cheap, absorbed impact well, folded into something that could work with a vending machine, and had a minimal carbon footprint. Recycled paper came to mind at once- it has, by some rubrics, zero footprint. It is used to protect everything from Amazon packages to supplies dropped from helicopters into refugee situations. And paper in a honeycomb pattern is astonishingly strong. A problem that presented itself immediately was the fact that the head is round and commercially available honeycomb paper is not. In order to effectively cushion blows, a honeycomb's cell needs to be roughly normal to the head it is protecting. With no radial-cell honeycomb paper in existence, I rather painstakingly made radial-cell prototypes by hand.

It was with some trepidation that I brought my honeycomb paper to a impact testing lab to see how it reacted to controlled force (previous tests had been carried out with a hammer). To my pleased astonishment, it performed better than I had expected, passing most helmet standards easily. The material limitations made themselves known, however- the crash tests were no problem (reducing impact as well or better than traditional polystyrene helmets) but in order to pass US regulations the helmet needed to be submerged in water for three hours before testing. Paper was not going to stand up to this. Fortunately there are many good, biodegradable hydrophobic paper coatings on the market and I am in the process of choosing the most appropriate one.

I spent a lot of time figuring out a form that looked great and required no assembly. One of the problems with inexpensive helmets currently used in conjunction with bike share programs is that they look like buckets; it was imperative that the IO Helmet look stylish and cool. I took inspiration from the leather helmets of the 1970s, splitting it into three blocks that run fore and aft on the head. I prototyped it to look nice with NYC area bike shares- most are blue and white- but the outside surface could easily be branded with anything.

The assembly process evolved from a multi step ordeal into simply placing the helmet on the center of the head, pulling the straps down and clipping the buckle. It is one size fits most, since the material is naturally a bit stretchy and conforms to nearly all adult heads. For the strapping and buckle I used off-the-shelf paper components so the entire unit can be pitched into one recycling bin when the user no longer needs it.

This is an ongoing project. In addition to trying to get the paper version certified and on the market, I am working on developing a non-single-use helmet that would be a more stable material and carried by the user rather than bought onsite. This would raise the price point of each unit, of course, but also allow for a more comfortable customizable product. It will have padding like a traditional helmet, and perhaps an outer layer in addition to the waterproofing on the paper itself.

I am an avid cyclist and a lover of cities, and I think that anything which allows people to engage confidently with their environment is of great value. My hope is that IO will help both tourists and locals ride more freely, more safely and more often.