Magnetic resonance imaging (MRI) is the gold standard in medical practice for non-invasive tissue imaging. However, current devices are expensive to produce and require users to remain in a lying position during the scanning procedure. This can cause a negative patient experience, anxiety, claustrophobia and consequent fear of this medical technology. A current research initiative investigates the potential to position patients in an upright position in a head-only MRI scanner. We developed a patient-handling system for this novel medical technology. The new patient position offers the possibility to address the current shortcomings of conventional MRI scanners but poses a unique challenge to the patient to keep the head still for up to 20 minutes to secure high-quality scans. Patients in a lying position need to minimise head movement in two axes, however, in a seated position there are three. The project was conducted from a user-centred design perspective involving explorative research methods to develop an understanding for the context of use; the development of numerous design prototypes; usability tests with participants and MRI experts; and the production of a full-scale prototype. Our final full-scale design system consists of a movable chair that positions the user correctly inside the magnet bore. The patient can control the chair with a remote control which is a new and unique feature in the context of MRIs to reduce any feelings of anxiety and lack of control. Once the patient is positioned correctly inside the system, an inflatable head support system starts to expand around the neck, forehead and sides of the head to reduce head movement. We tested the final chair and head support system with qualitative and quantitative methods including a motion head tracking system to secure high usability of the novel system for patients and technical staff alike. 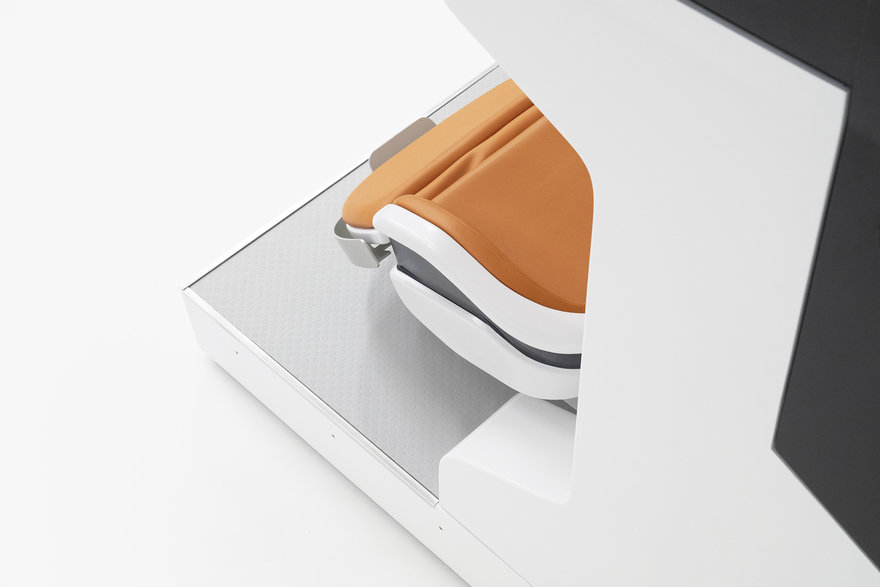 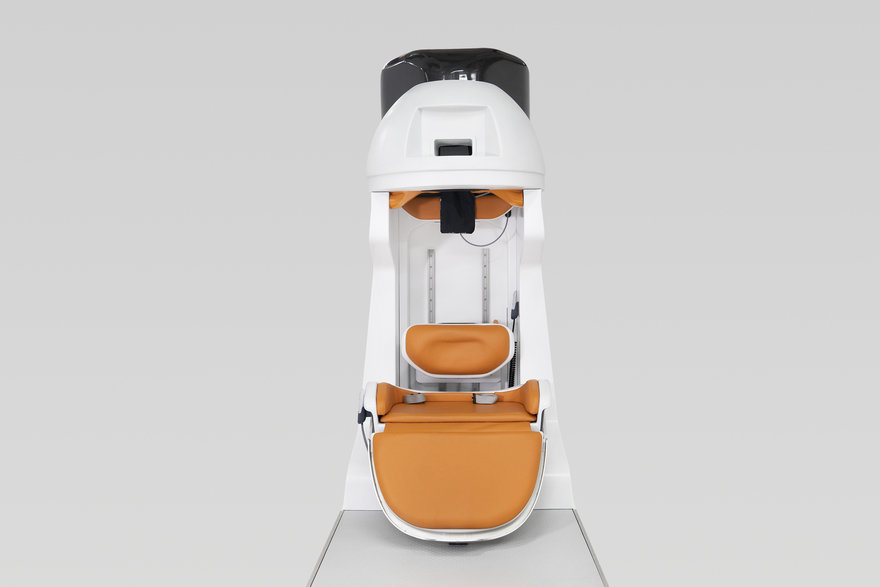 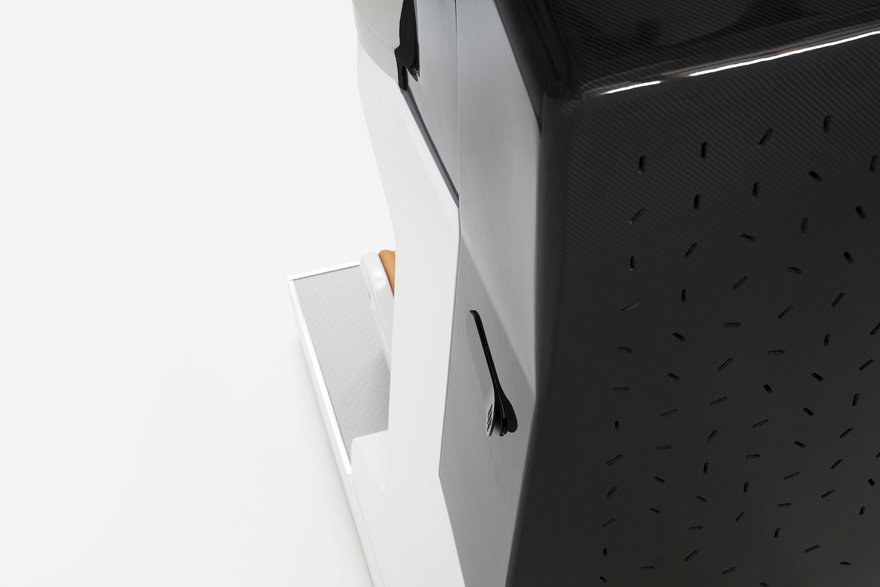 We used a pattern element on the different parts of the system as a unifying element and reference to its development in New Zealand. The pattern is based on the way New Zealand flax grows which is an extremely durable and adaptive material spanning various applications and areas of everyday life. The pattern references at the same time the functionality of a magnet aligning atoms of a body. Sam Bryan 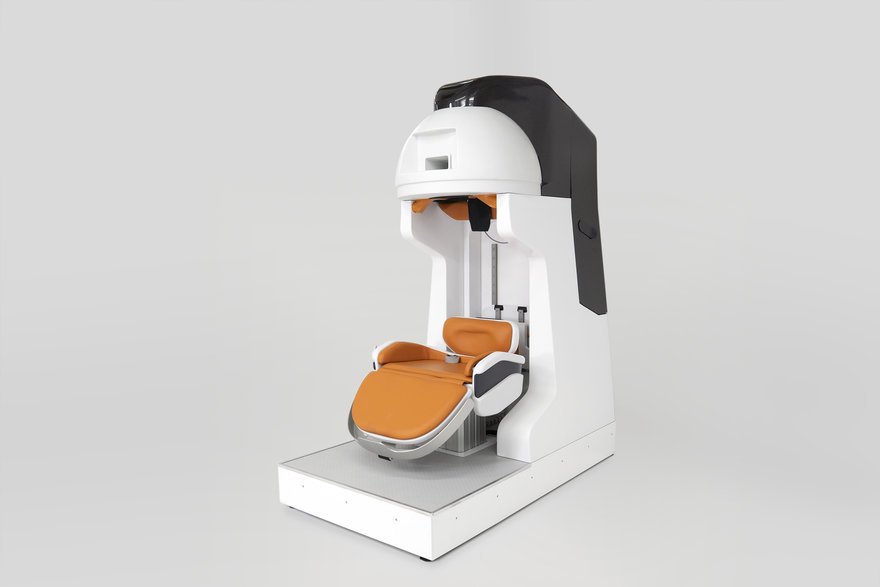 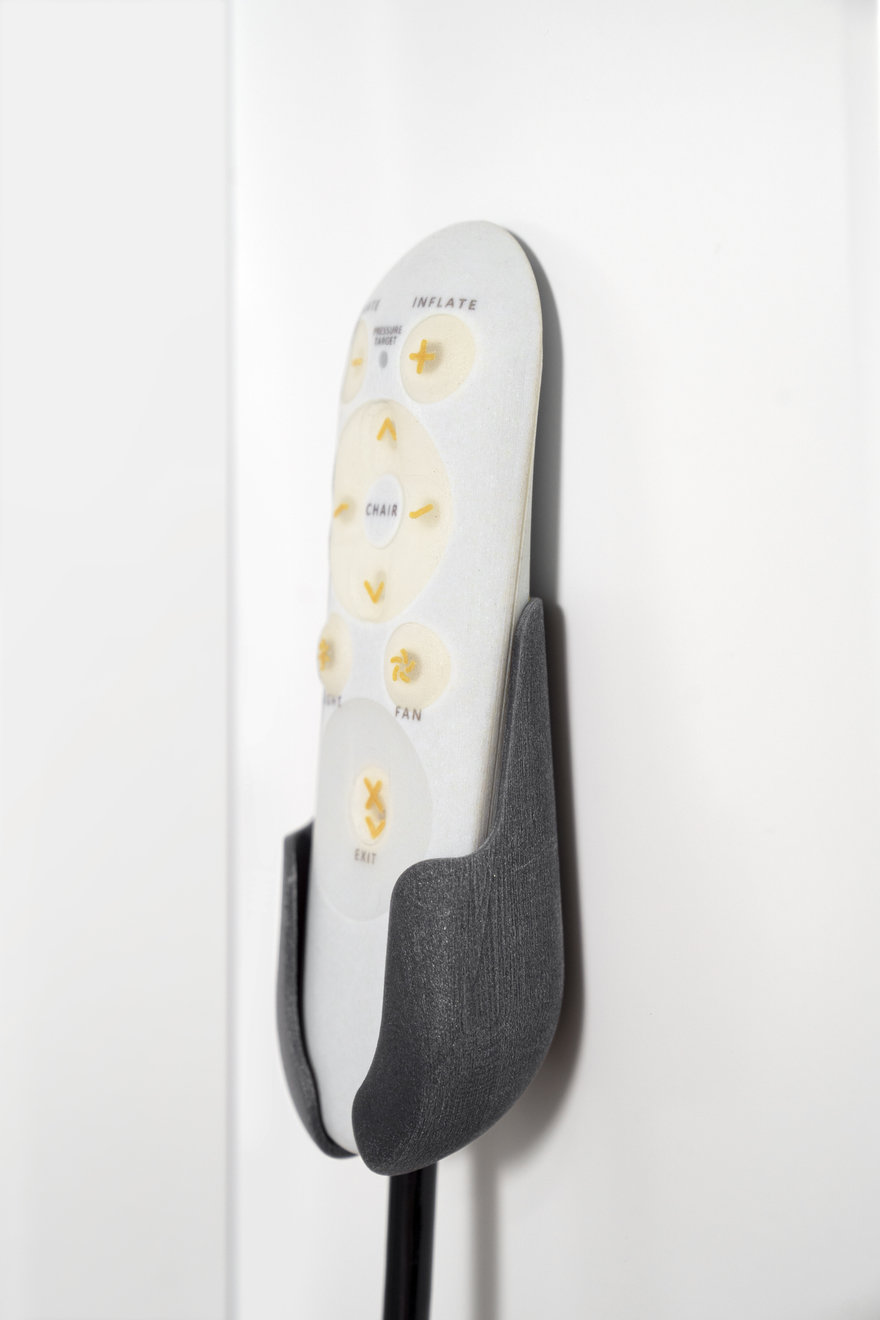 Technician controller The technician is able to take over control of the system if required. Sam Bryan 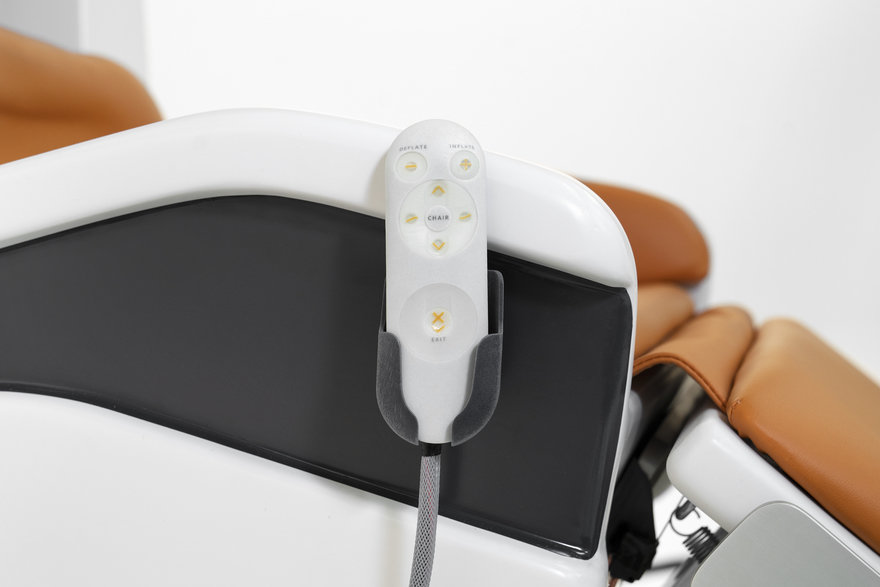 Patient controller The patient can control the speed of the chair moving upwards, angle of the leg-rest and inflation/deflation of the system Sam Bryan 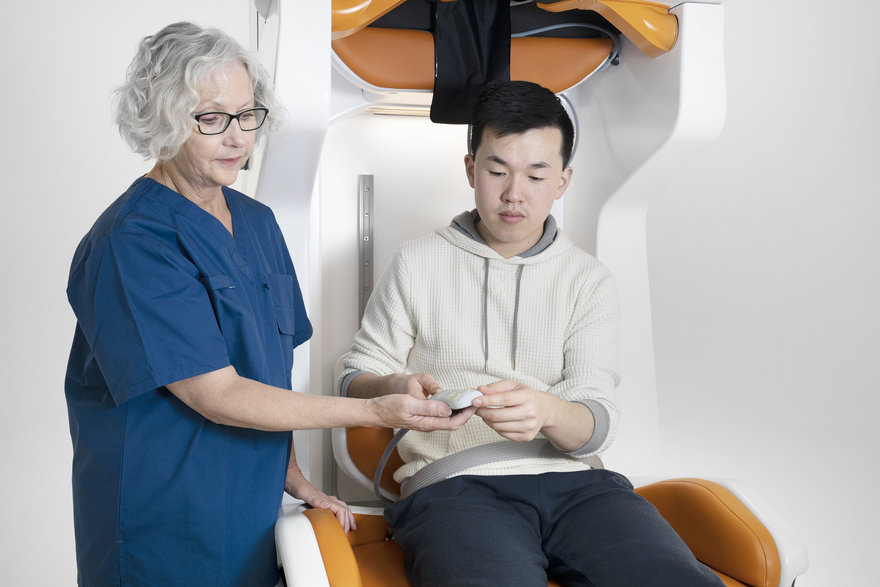 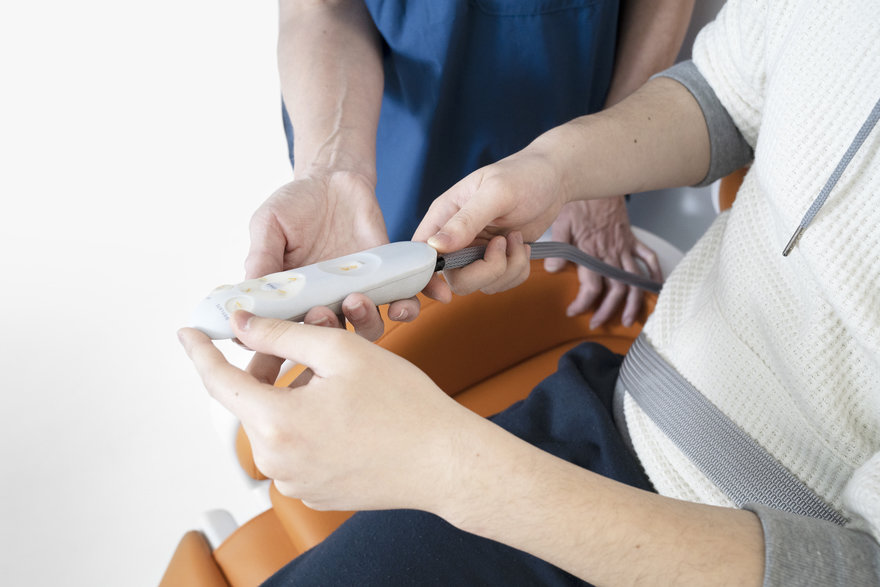 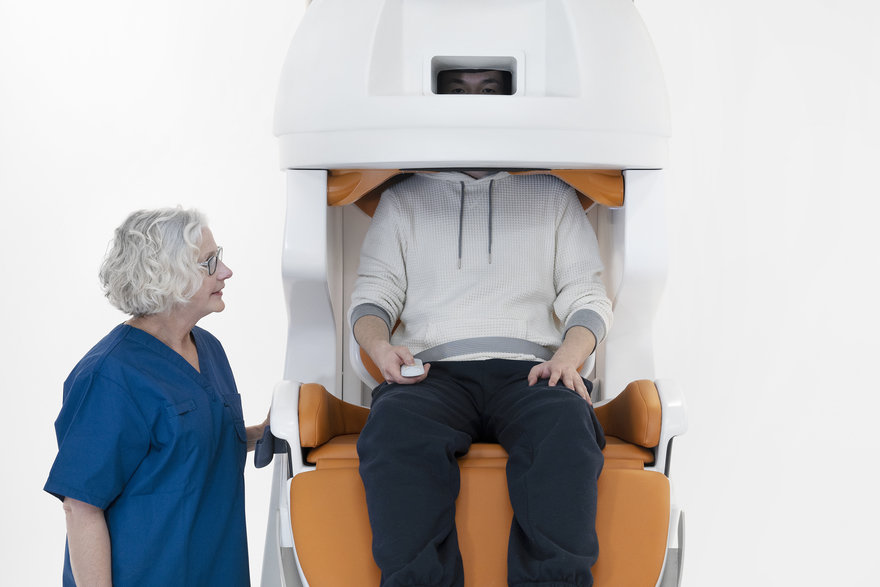 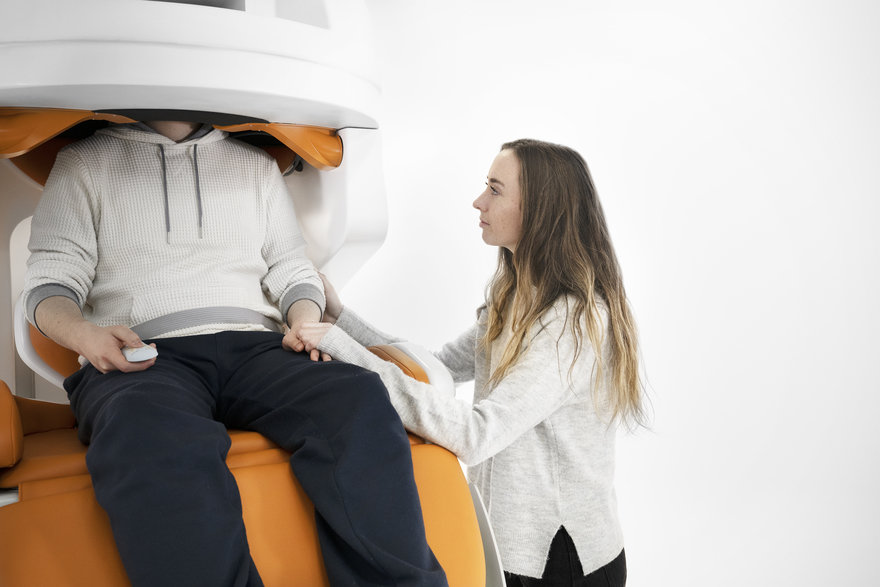 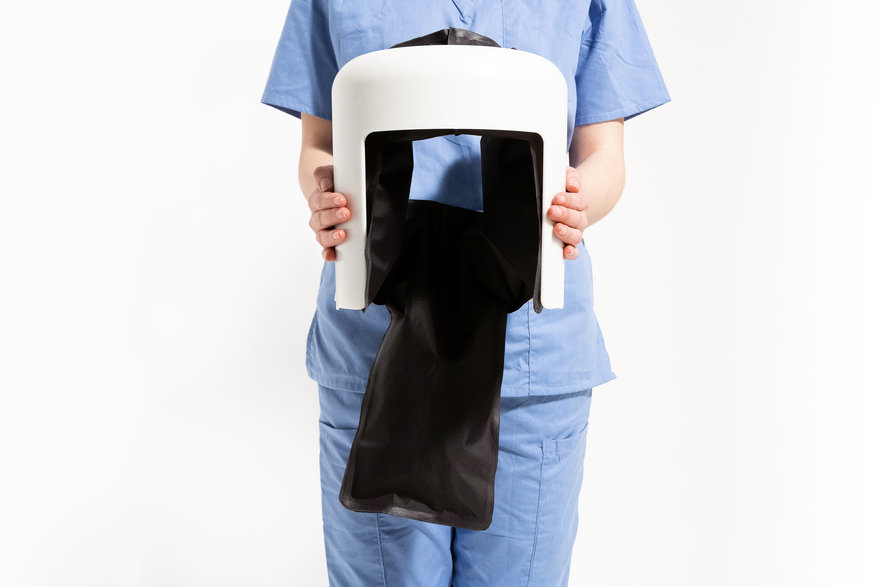 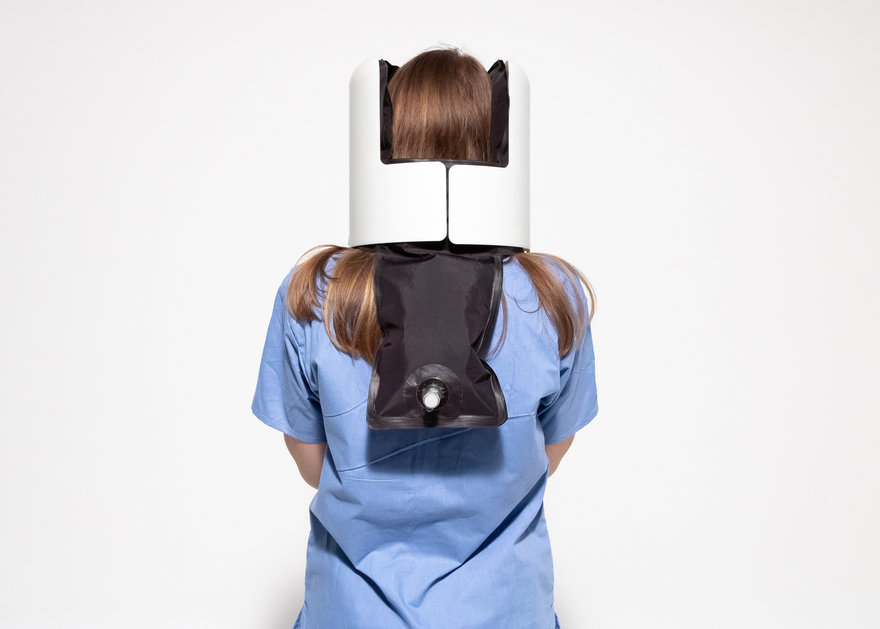 Magnetic resonance scanners (MRI) are a non-invasive imaging technology that is used to obtain images of human tissue such as the human brain. They are a commonly used type of technology in hospitals worldwide. However, this form of technology is extremely expensive to manufacture, often very large and requires a designated room in a hospital shielding the magnetic influence from the rest of the building. Medium to large hospitals can afford to buy and run such a piece of equipment, but smaller and remote hospitals often face limited financial resources. A smaller and transportable MRI system could provide access to people who currently need to travel long distances to hospitals witch MRIs.

MRIs are large devices that normally require the patient to lie down on a stretcher. RF coils are positioned by an MRI technician around or on top of the body part that needs to be scanned. The stretcher is then moved inside the bore by the technician. The MRI scanning process requires the patient to remain as still as possible to avoid any kinds of motion artefacts which cause a reduce image quality and in a worst-case scenario repetition of the scan. From a patient's perspective, the enclosed space inside the bore and the extended-time that the patient is asked to remain still can cause enormous anxiety before and during the scan. Medical studies have highlighted that the feeling of a lack of control and the lying position inside the system are negative factors in the patient experience. Patients further report that they are scared that they can't breathe inside the system, that they are afraid of the length of time that they have to remain inside the bore, and that accidental movement could mean that they have to redo the scan. The development of a seated, head-only imaging system dedicated to brain imaging, which is one of the most common applications for MRIs, would offer a less restricting scanning procedure. Patients would be able to feel more in control due to the upright position and could move arms and legs to secure a comfortable position. Our proposed patient handling system for a new kind of MRI system would furthermore allow the patient to look outside the bore thanks to an included window.

This study is part of a multi-institutional research project taking place in the United States of America, Brazil and New Zealand. We were given a number of technical constraints by the lead investigators of the research initiative to secure the technical and medical usability of the new system. The preset design criteria were: (1) The patient position in an upright orientation; (2) the position and size of the window inside the magnet and (3) the permanent position of the MRI magnet above the ground.

One of the main technical constraints of this project was that the patient's head needs to remain still in the x,y and z orientation to minimise motion artefacts during the scanning procedure and that every patient needs to be positioned inside a specific imaging volume of the system. This differs from traditional head support systems and devices in which the patient normally lies down. Additional technical constraints included: (1) the size of the magnet was predetermined and the magnet could not be moved in the process of positioning the patient; (2) the materials need to be hospital graded materials and nonmagnetic; (3) and the head motion needs to be reduced to under 1 mm for up to 20 minutes in the x, y and z orientation; (4) the head support system should be able to compensate for accidental movement of the body; (5) the overall design aesthetics should conform with the established design aesthetic inside a hospital environment e.g. white as a main colour feature.

Our system consists of four main design elements: A chair component that allows placing the patient at the correct position inside the magnet and a head support system which secures minimal head movement of the patient during the scanning process. The third design component consists of two remote controls that are used to control the chair height, angle of the footrest, airflow inside the magnet bore, and the inflation of the head support system that secures the patient's head in a stable position during the scanning process. The fourth component refers to the overall aesthetic of the system including side panels, floor element and carbon fibre covers.

Our patient handling system consists of a chair which was developed and tested in an iterative design process. We used low fidelity prototypes to test potential ways to sit inside the system while remaining motionless for 20 minutes. We developed in a consequent step, two full-scale prototypes based on our findings which we tested with participants. The final system allows to change the angle of the footrest, has a leg-rest for patient comfort, and a back-rest that provides lumbar support and can be adjusted depending on the height of the user.

The system contains two remote controls. One is for the patient and allows the chair to move upwards at a speed that the patient feels comfortable with. The patient can further change the angle of the leg rest and extend the footrest. The system stops automatically once the patient reaches the top of the bore. The patient can then start to inflate the head support with the remote control and if necessary deflate it in case the pressure feels uncomfortable. The second remote control enables the MRI technician to take control of the system in case the patient feels uncomfortable. A pressure indicator on the technician controller allows double-checking that the right pressure level has been reached. The remote buttons contain raised design details so the user can feel and distinguish the icons even when being inside the bore.

We developed over forty head support prototypes as part of this research project. At the start, we tested devices that secure a stable head position such as cervical collars, inflatable neck pillows and 3D printed support systems. We did find out that solid prototypes were difficult to use and that designs that elevated the chin too much caused discomfort and pain. Consequently, we started to investigate inflatable design solutions that allowed the patient to access the bore easily, could support different users sufficiently, were easy to remove and clean and allowed consistent support. We tested a number of fully functional prototypes which led to the final system. The inflatable bladder part is installed on a carrier system that can be positioned inside the bore and if necessary removed. An automated air pump system inflates the system by pressing the corresponding button on the remote control.

The complete system is made out of removable parts that are placed on top of an internal support structure. All the parts including the chair can completely be removed and be shipped inside a standard shipping container.