On-court coaching has been a hot topic in women's tennis since its debut in 2009. The ability to call a coach on court during a match has been embraced by many players as a concept that helps them achieve their potential. In 2015, the Women's Tennis Association (WTA) allowed the coaches to bring a WTA-authorized mobile device on court during coaching breaks for the first time. It is with this new technology that this story begins.

In the past, conversation between the coaches and their players was based on opinion. Coaches did not have any objective tools to support their observations. Time constraints combined with the high pressure of the game makes it imperative that the brief communication between players and coaches be efficient and informed by accurate data.

SAP Tennis Analytics for Coaches is a tool that facilitates this communication between players and coaches. It is a tablet app that gathers data in real-time from ten on-court cameras and the umpire's scoring of the match, translating them into strategic insights. Through insightful information and simple visualization, players and coaches are able to communicate objectively with a tool they mutually trust.

The app was launched in August 2015 at the Bank of the West Classic tennis tournament, where 70% of the player community used it during live matches and for player scouting. It was also used by Angelique Kerber, the tournament winner and world number 11 at the time (She recently rose to world number 2 after winning her first Grand Slam at the Australian Open 2016). Today, you can see the app in action during televised WTA matches around the wo­rld and witness how it has transformed communication within the professional tennis community. 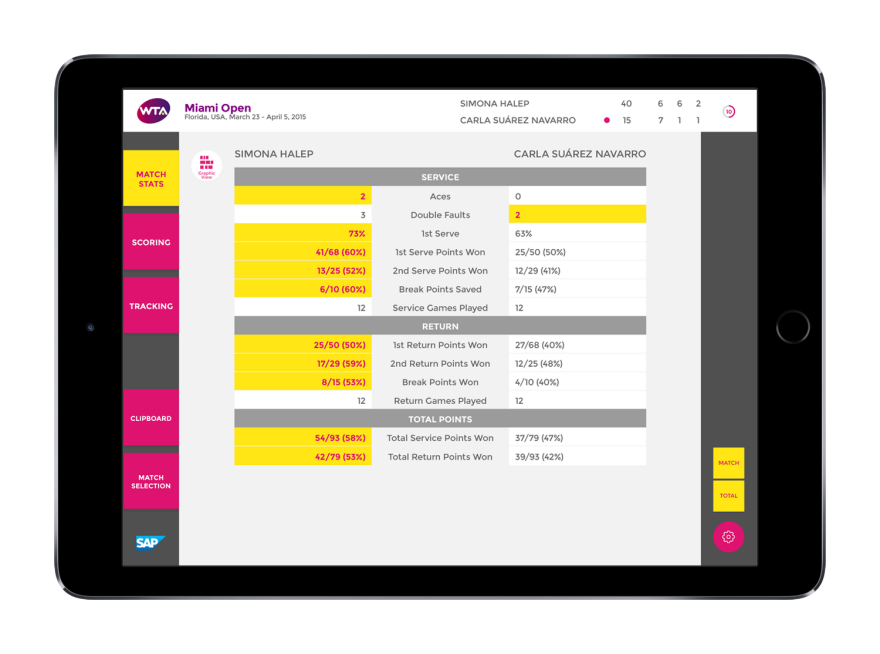 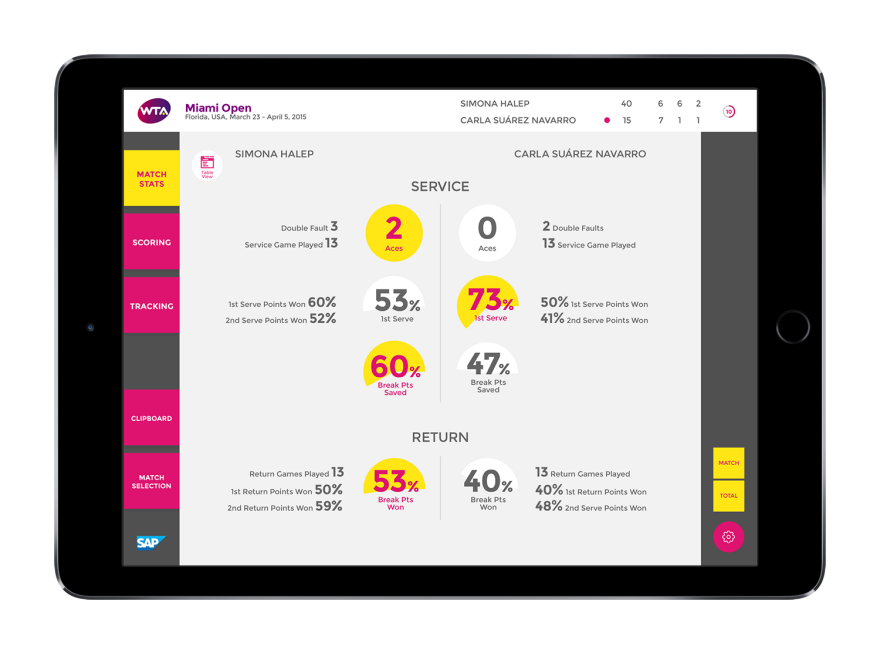 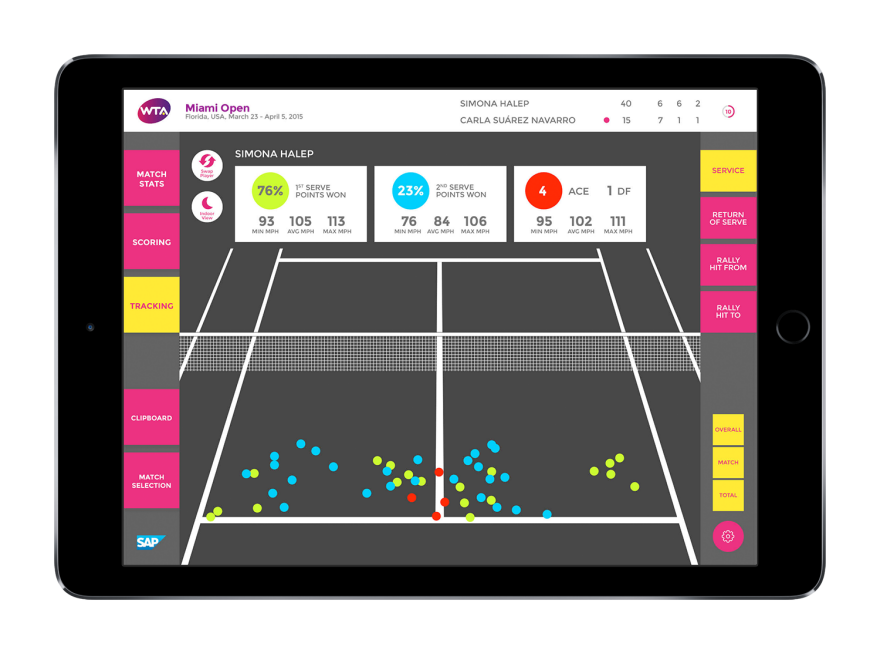 Tracking Serves (under intense sunlight) * Data not from actual match 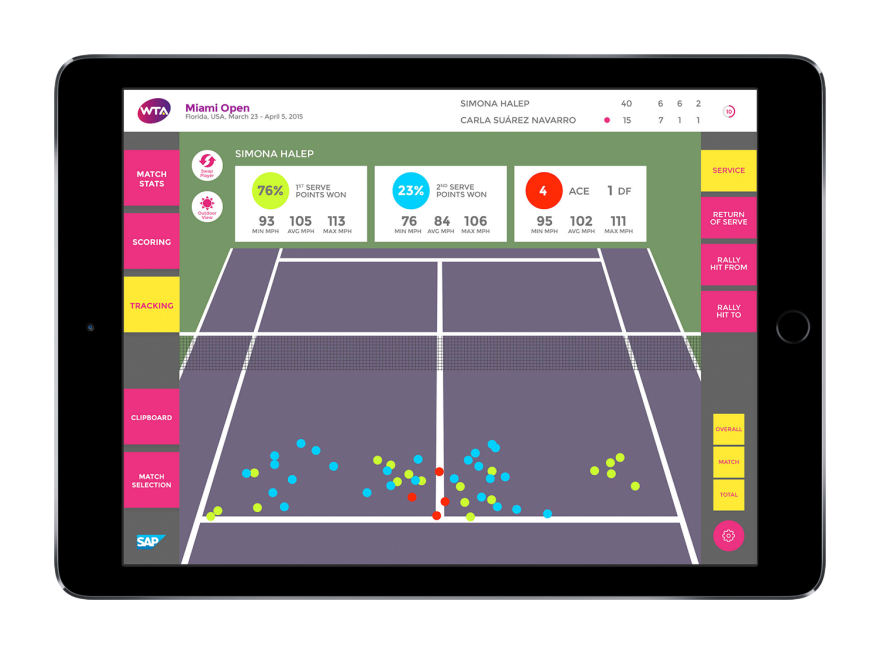 Tracking Serves (under normal lighting) * Data not from actual match 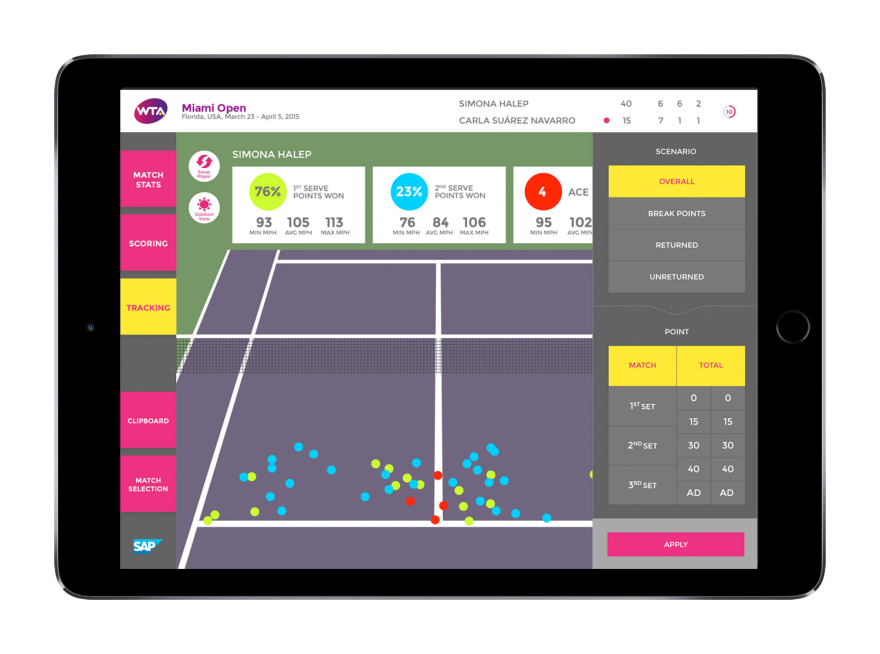 Similar to many professional sports in the past, women's tennis was not as popular as men's. In 2009, on-court coaching was implemented for the first time as a concept that could help fulfill the player's potential and insert something unique into women's tennis. The conversations between the coaches and players are broadcasted, which give fans an opportunity to sneak behind the scenes, giving them more reasons to watch the game. In 2015, the Women's Tennis Association (WTA) permitted coaches to bring a WTA-authorized mobile device on court during a coaching break, which added another dimension to on-court coaching. The SAP Design & Co-Innovation Center (DCC) was brought in to design this new coaching experience.

The DCC designers came into this project with different levels of domain knowledge. One knew nothing about tennis, one knew only how to keep score, and the other was a tennis enthusiast who played the sport on a weekly basis. Regardless of the team's background knowledge, no designer fit the user archetype: a tennis coach. Coaches need to see different data than what typical fans want to see. Fans typically want to see the winners (unreturned shots) hit by their favorite player. Whereas coaches are looking for patterns of shots that give their player the best chance to win. These patterns may include the winners or shots that forced the opponent to make an error. One of the team's first steps was to identify useful data points from a coach's perspective.

In a perfect world, we would have worked with the world's top tennis coaches as part of the design process. However, reality provided us with a single tennis coach. It is common to deal with constraints like this during projects, in addition to the typical time and resource constraints. This required the design team to distinguish key insights from our subject's personal opinions.

The Right Amount of Insights is Key

Brief coaching moments can be critical to turning a match around. A standard coaching break lasts for a mere 90 seconds. In a tennis match that can last for hours, this brief interaction is crucial, as it can change the tide of the match completely. Advanced technology like SAP HANA provides tennis coaches and players more access to player analytics. However, with only 90 seconds to communicate with their players, it is critical to provide just enough data insights without overwhelming the coach with data, so that they can quickly communicate details with their player. The design team worked with the coach to identify and prioritize different data points, and group them into categories. The team then sketched designs and built the wireframes with frequent iterations with the coach for feedback. Eventually the final design achieved the right balance of data insights to enable a productive 90 second coaching session with a player.

As the design matured enough to be digitized and viewed on a tablet, we were given the opportunity to test our design in real tennis tournaments in Dubai and Miami with more coaches and their players. However, due to the nature of the game, the design team was only able to get short bursts of feedback on the app during the course of a match. Again, in a perfect world, we would have preferred longer interview and feedback sessions. To help address this shortfall, the team also focused on coach behavior and environmental conditions. Both the tennis tournaments in Dubai and Miami were outdoor tournaments. It was in the field observations that the design team identified one fundamental design flaw in the application: outdoor use required a unique design approach.

Impact of Sun and Heat on Design

The team observed that some subtle low-contrast colors became invisible when using the tablet app under direct sunlight. Since the app was primarily being designed in an office environment, the challenge of outdoor usage had not been a consideration in the designs. By testing the design in the field, it opened the door for an innovative and novel sport analytics apps design: indoor and outdoor viewing modes. The indoor view uses natural colors of a tennis court that is easy to view under controlled lighting conditions. The outdoor view uses a high-contrast color scheme (e.g. a pitch black tennis court with white lines), which allows the information to be clearly viewed under intense sunlight. During the outdoor matches, most coaches were also wearing sunglasses, which further muted the colors on the screen, making things like tennis balls even less distinguishable. To address this, the team tested multiple color schemes and settled on a saturated color pallet to ensure that different tennis balls (i.e. multiple data points) are clearly represented whether the coach uses sunglasses or not.

It was also found that under intense sunlight, a hot tablet (an iPad) could not detect the fingers of the coaches very well. This caused our scrolling interaction to be quite troubling. To solve this issue, we had to simplify and redesign the content of some screens to eliminate the need to scroll and to replace some standard scrolling interactions with previous and next buttons. Finally, the tablet was also accompanied by a weather-resistant case for ease of use under extreme weather conditions.

In addition to addressing unique environmental design challenges, the team was also able to identify other areas to improve the interaction design. By observing how the coaches held the tablet while watching the match, we were able to maximize the court real estate on the screen, where coaches were focusing their attention. This also led to minimizing the navigation UIs by placing them to the left and right sides of the screen. The positioning of the navigation took advantage of the natural grip of the tablet, allowing coaches to use their left and right thumbs to move from screen to screen without losing their tablet grip while analyzing the game.

Today, you can see the app in action during televised WTA matches across the globe and witness how it has transformed communication within the professional tennis community. Behind the scenes, empathy and field research were indispensable to our success. Empathy for our user is what remained constant throughout the process despite facing multiple constraints and challenges. Without the discoveries we made during field research, our app would just be another coaching app in the market that does not work in real and demanding conditions. Most of all, we are excited that SAP Tennis Analytics for Coaches has made an impact in women's tennis, but has the potential to transform how coaching is done in professional tennis.

One of the few that was based on data and data analytics and going forward data is an important part of products and product definitions. It was addressed in a very innovative way as such.