Stille is a service which aims to help institutional caregivers of the elderly to maintain their empathy and their energy to care, by supporting caregivers' emotional well-being.

In rapidly aging societies like Denmark, the demands on institutional caregivers of elders will increase, worsening the stress of an already-demanding job in a talent-crunched profession.

Stille achieves its aim of recharging caregivers' energy and empathy, by:
1. Allowing caregivers to support each other emotionally, through sending audio messages of appreciation and gratitude

2. Providing timely prompts for caregivers to reflect on their day and a dashboard that visualizes the caregiver's mood patterns

3. Prompting micro-breaks at a "phygital" micro-break station, which helps caregivers reduce their stress via a calming haptic rhythm.

These interventions allow caregivers to recharge themselves and each other with gratitude and appreciation (which are positive expressions of empathy), potentially cascading through the rest of the eldercare institution.

The service is facilitated through a digital app, with the physical micro-break station located in a quiet room of the nursing home floor.

The project was done over nine weeks, with 21 hours of shadowing and 10 co-creation/interviews sessions with 20 nursing home caregivers and staff. Hypothesis testing was done through rapid prototyping, including paper, mock-up app screens, digital & physical haptic prototypes, and experience prototypes. The nursing home was located at Sølund, Copenhagen, Denmark. 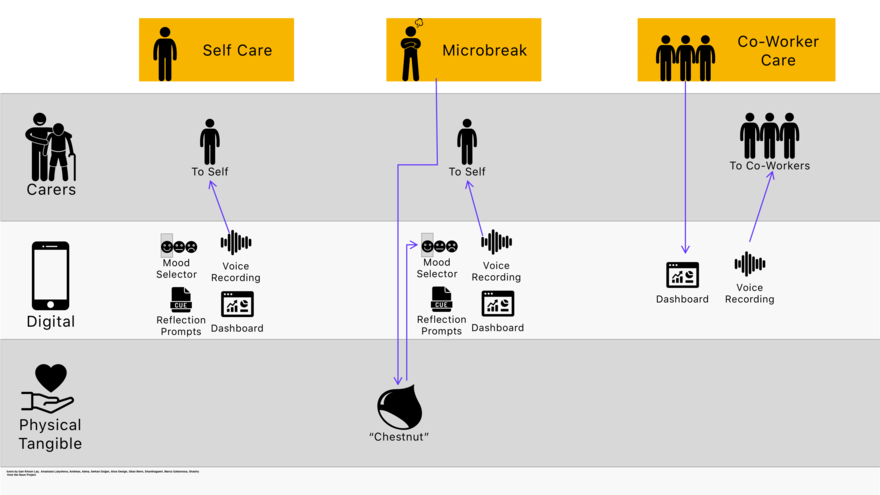 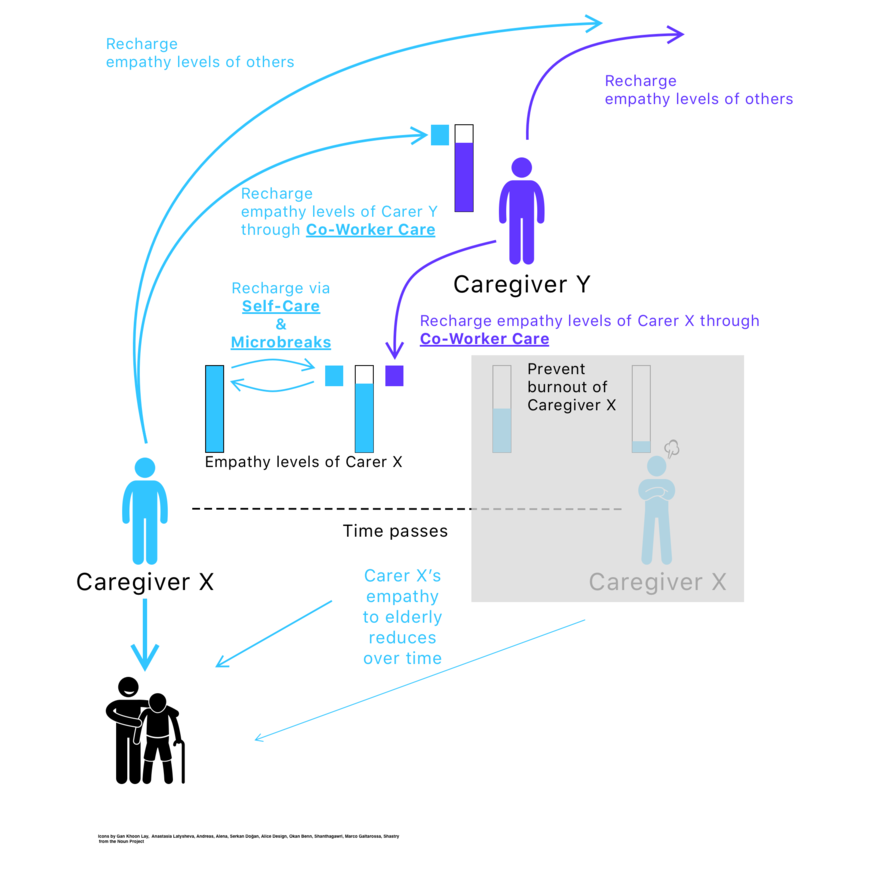 Solution Strategy
Visualization of how the different modules of Stille work in concert to prevent caregiver burnout, and to create a positive flywheel effect through the institution. 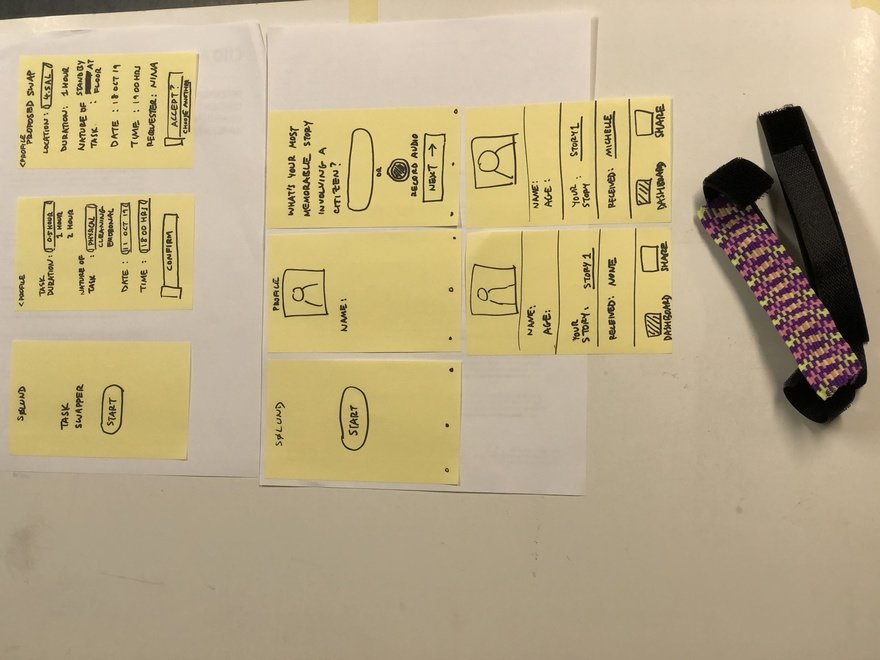 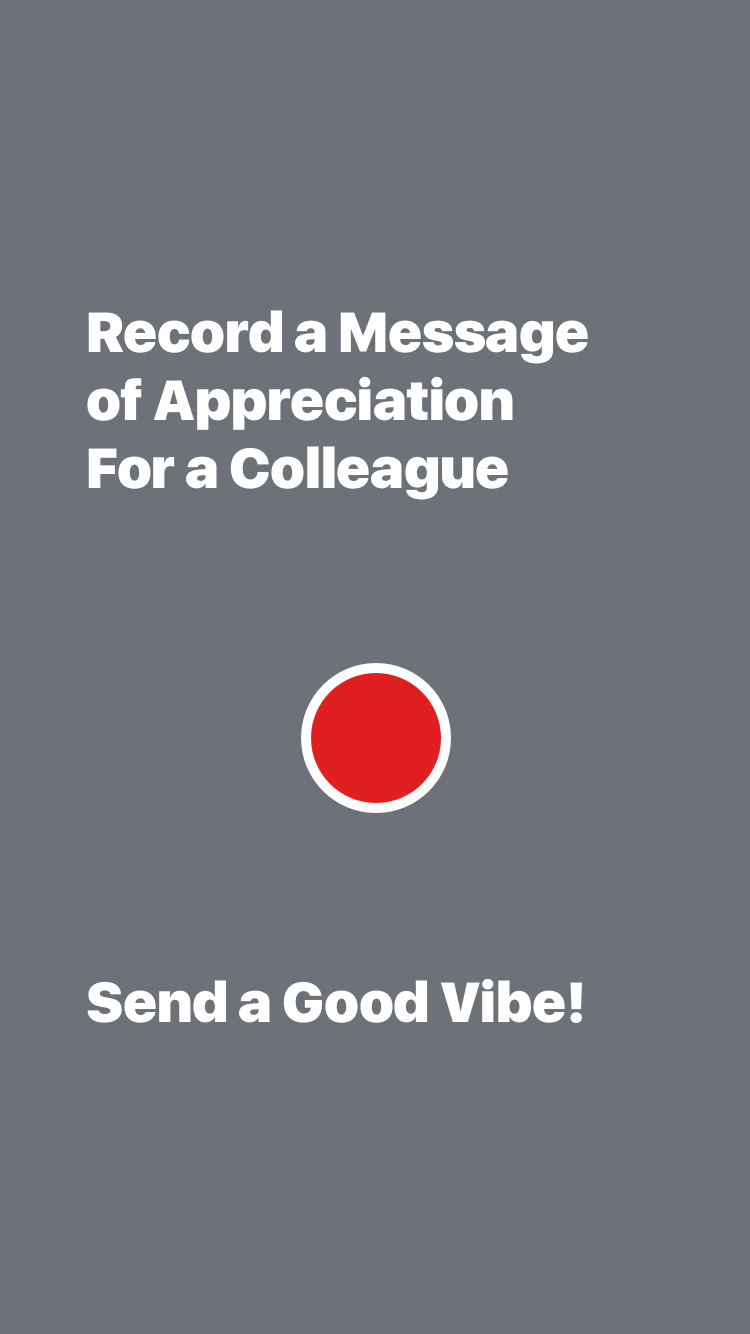 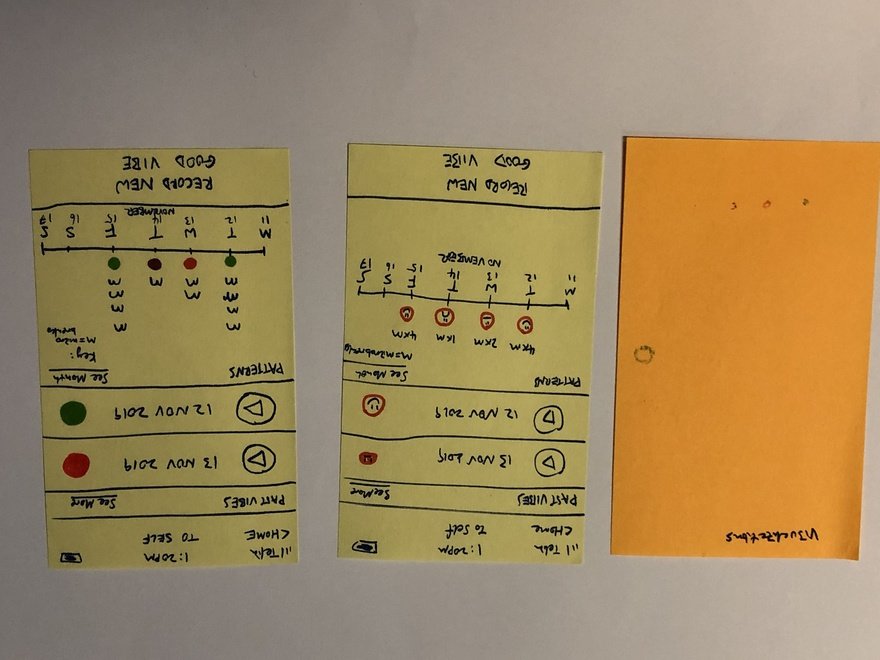 Paper Prototypes of Mood Dashboard
Two different versions of dashboard were used in co-creation with caregivers. The caregivers largely preferred the emoji. 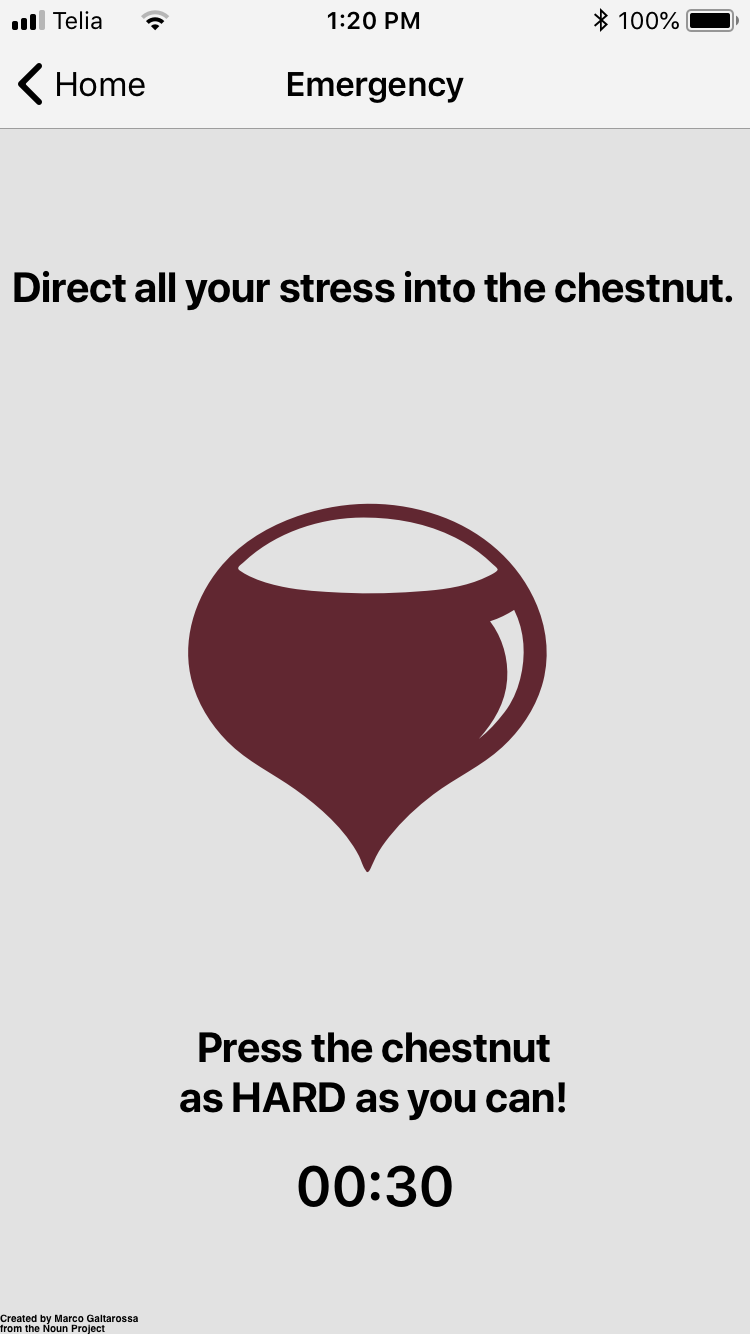 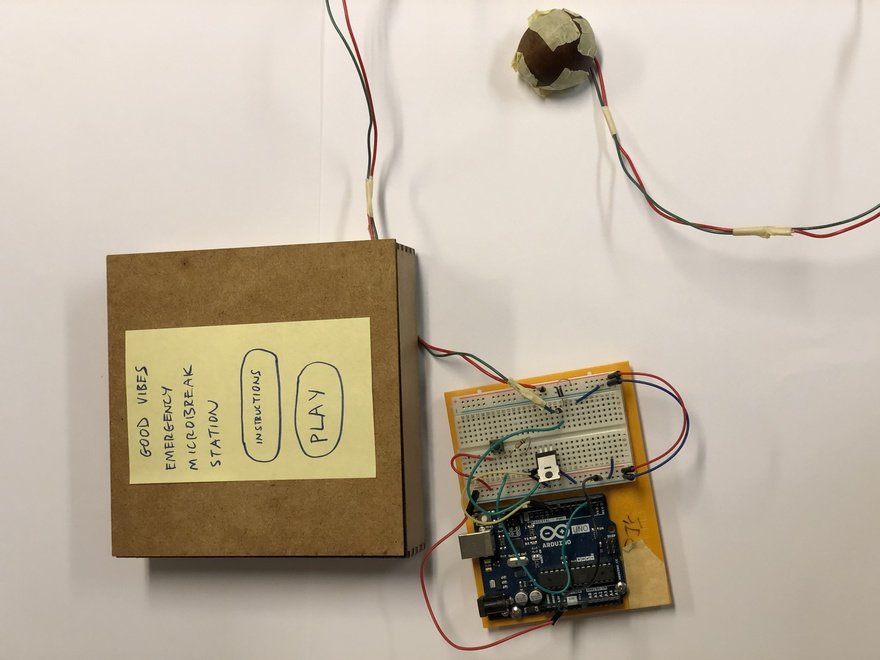 Physical chestnut prototype
Used to test the physical microbreak station's "chestnut" vibration haptics. Constructed using an Arduino Uno, vibration haptic motor and a Danish chestnut (given to me by a caregiver) 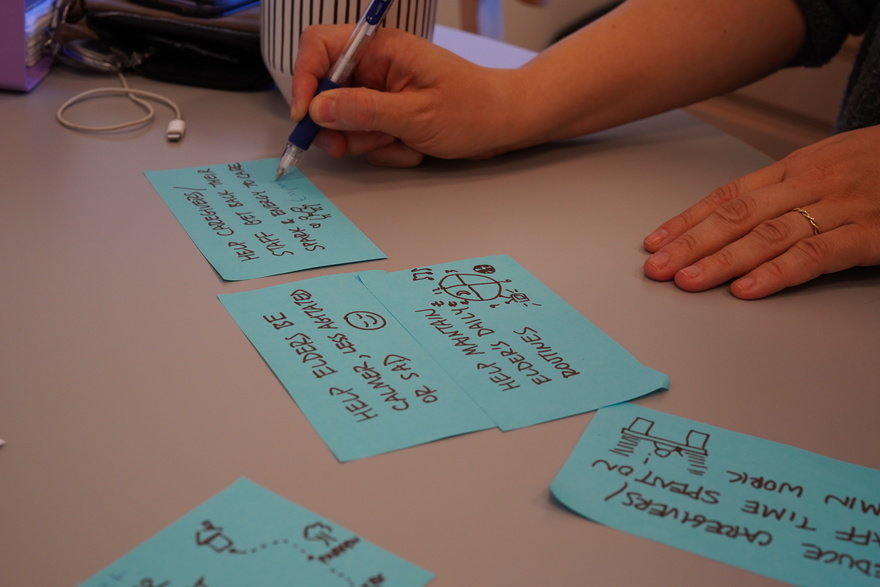 Sorting cards prioritization
Nursing Home manager prioritizing the challenge of maintaining the energy and spark to care in the nursing home caregivers. She's writing the word "empathy" on the sorting card. 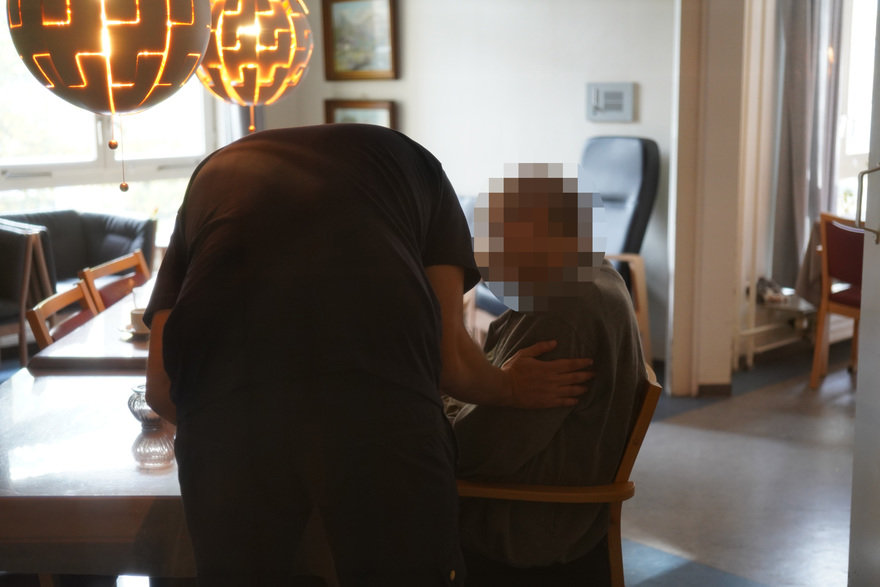 Caregiver consoling resident with dementia
Taken from the three days of shadowing (21 hours in total) that I did with the caregivers. 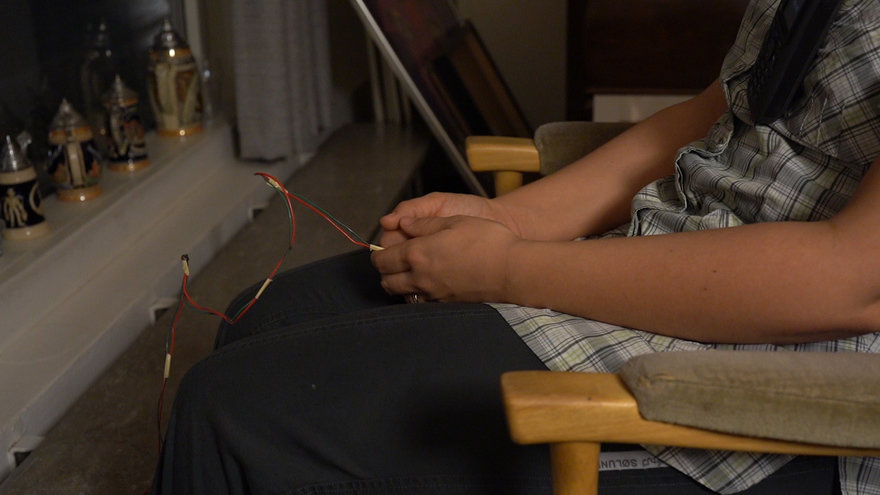 Stille was my final thesis project for CIID's Interaction Design Programme 2019, and was executed over nine weeks (excluding four weeks of industry projects) from Sept '19 to Dec '19.

Aging is a demographic trend affecting many countries in Asia, Europe and America. In rapidly aging societies like Denmark, the demands on institutional caregivers of elders will increase, worsening the stress of an already-demanding job in a talent-crunched profession. This is reflected in the high annual turnover rates for professional caregivers of the elderly (~25% per year at a nursing home in Denmark). Caregiver burnout also causes a loss of empathy, which in turn creates downstream problems of "bad elderly behavior".

Conversely, a Singaporean medical professional shared with me that caregiver empathy can alleviate "bad elderly behavior", which is currently frequently managed by sedation. An anecdote shared with me was about an elderly man with dementia, who initially needed to be sedated due to his bad behavior. After his son hired a new empathic caregiver, the bad behavior disappeared, as the new caregiver took the time to listen to him, asked him to repeat his stories, etc. The Singaporean geriatrician also shared with me that there are caregivers of the elderly who work in the field for 5, 10, 20 years with a continued spark and no burnout.

This caused me to think about the possibility of the opportunity area, which became my brief after a nursing home manager prioritized it: What if we can help institutional carers of the elderly in Copenhagen to maintain their empathy & energy to care for 5, 10, 20 years?

The solution strategy was to recharge the energy and empathy of the caregiver by appreciation and gratitude (which are positive expressions of empathy), either through individual mechanisms of care, mindfulness and reflection (via the Self-Care and Micro-break modules) or through appreciating their co-workers (Co-Worker Care module). The positive empathy could then cascade through the eldercare institution, via the Co-Worker Care module. (See pic on visualization of the Solution Strategy).

The key stakeholders of the service include the caregivers, residents, the relatives of the residents, the municipality ("Communes"), and also the governing body of communes (the ideal service owner, since they would have the scale and oversight across multiple communes and could offer this service as a benefit to reduce the caregiver turnover costs faced by communes).

This module allows the sending of audio messages of appreciation and thanks, between co-workers.

My research from shadowing and interviews pointed to a lack of emotional support of caregivers as an institutional gap in the nursing home; at the same time, most caregivers I interviewed relied heavily on their co-workers for ad hoc emotional support. This can be difficult during the shift, as the pace can be very frantic. After the shift, the co-workers tend to split their own ways, and sometimes do not see each other for days. Caregivers also already had a lot of screen and paper forms to fill up,

This module allows co-workers to boost each other's morale through audio messages of verbal appreciation, systematizing the current ad-hoc emotional support they get. Subtly, it also shifts the co-worker's mindset from one of fault-finding to that of gratitude, which also helps them be more mindful of the positive than the negative. The intent of this mindset switch is to hopefully catalyze a virtuous cycle that generates more positive emotions in the individual and her/his co-workers, rather than a downward spiral of negativity.

This service module is delivered digitally via a mobile app, allowing co-workers to record and send audio messages after the shifts wherever they are. This was influenced by Design Principles 2 (Focus on the emotional), 3 (Reinforce Social bonds & support amongst co-workers) and 5 (Non-written reflection mechanisms) (see below for more details on design principles). The sharing of audio messages of appreciation was tested via a Whatsapp chat group among some of the caregivers: the result was good enough that they continued with the practice even after my project was over. Caregivers also indicated that they would prefer a formal work-app for this, rather than just using Whatsapp, as a formal work-app allows them to more clearly draw work-life boundaries.

Video of demonstration and validation of Self Care module here.

This module supports caregivers' self-care, by allowing them to reflect individually. The module allows caregivers to:

-view their recent moods and microbreaks history with a dashboard

-reflect on prompt questions, curated to help them process their emotions (based on their moods)

Research indicated that not all caregivers dealt with stress by going to their co-workers: some needed their own time away. Some talked aloud, even to themselves, and a number of them reflected on their own emotions (see Design Principle 2 (Focus on the emotional), below) at the end of the day. The audio journal and prompt questions were influenced by Design Principle 5 (Non-written reflection mechanisms).

This module is delivered digitally via a mobile app, allowing caregivers to conveniently access this module during the shift and after work.

Video of the co-creation and demonstration of the Microbreak module is here.

This module augments the caregivers' existing rest areas in the nursing home, with a "phygital" vibrating "chestnut"* that helps take their mind away from their stress. It is activated by the caregiver surrendering their phone to the station, and by picking up the "chestnut"; this also logs the microbreak in the dashboard (see Self Care Module).

My research interviews indicated that caregivers would "escape" to certain areas out of sight from the residents to get some rest and respite. Sometimes the caregivers would just look out the windows; sometimes they would end up engrossed with their phones. The soothing nature of tactile interactions (see Design Principle 4, Tactile interactions to calm & soothe) was tapped on to augment the rest areas, to help create a break (see Design Principle 1, Address the Stress: create a break).

(*Note: Chestnuts have a special significance in Danish culture, signifying the arrival of autumn, memories of childhood and family. As chestnuts do not have a similar significance in other cultures, the form factor of the haptic device can be altered into something equally emotionally significant & positive for other cultures.)

My design research yielded five design principles, which were used to design the solution.

#1: Address the Stress: create a break. A part time nursing home caregiver said to me, "Happiness is not the same as stress." Many of the caregivers found the work to be meaningful, but were still getting burned out. Thus, it was not sufficient to create meaning, but there was a need to design for a break, even a small one.

#5: Non-written reflection mechanism. Almost all caregivers though about their work, and found it useful. However, five caregivers were given five notebooks to journal over two-weeks: this yielded only THREE pages of reflections. As one caregiver said to me, "If we had to write, it is just another task." There was an opportunity to create non-written mechanisms that help caregivers reflect on their shifts and emotions.

After the brief was prioritized through a sorting cards exercise with a nursing home manager, the research process proceeded in two phases.

Phase 2 involved a series of co-creation sessions with the caregivers (10 in total). Some sessions involved deliberate testing of specific hypotheses using prototypes (such as, determining which modules needed to be digital vs. physical; for example, see picture of the digital chestnut, and the physical chestnut prototype I used. More detailed documentation on the project website). I also used a lot of open-ended discussions to co-create possible solutions with the caregivers: the idea of exchanging messages of appreciation for each other came from a trainee nurse.