Surplus is a logistics service and application that enables food manufacturers and retailers the opportunity to donate any surplus, ‘fit for purpose’ food to their partnering charities. In doing so, more food will be redistributed to vulnerable people living in food poverty instead of being disposed in landfills.

Safe to consume surplus food can be uploaded onto this application, and made visible to charities in need, as a donation. The charities will be able to know exactly how much food is available and accept any donations that would apply to them.

With the major stakeholders involved on the same platform, a unified approach is adopted to tackle similar goals, a transparency of information is created and the process is made more efficient in order to maximise the amount of food that is redirected away from landfill to those that need it most. 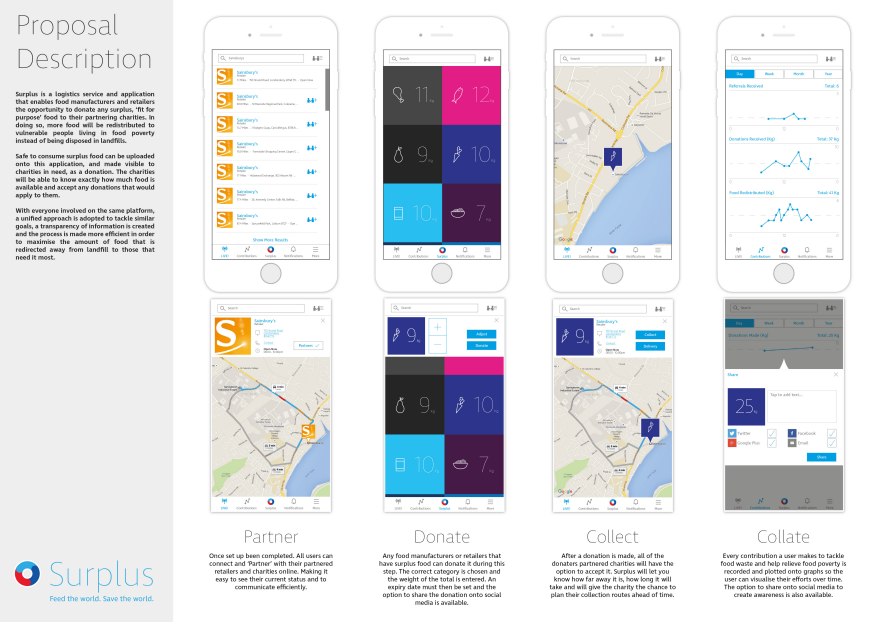 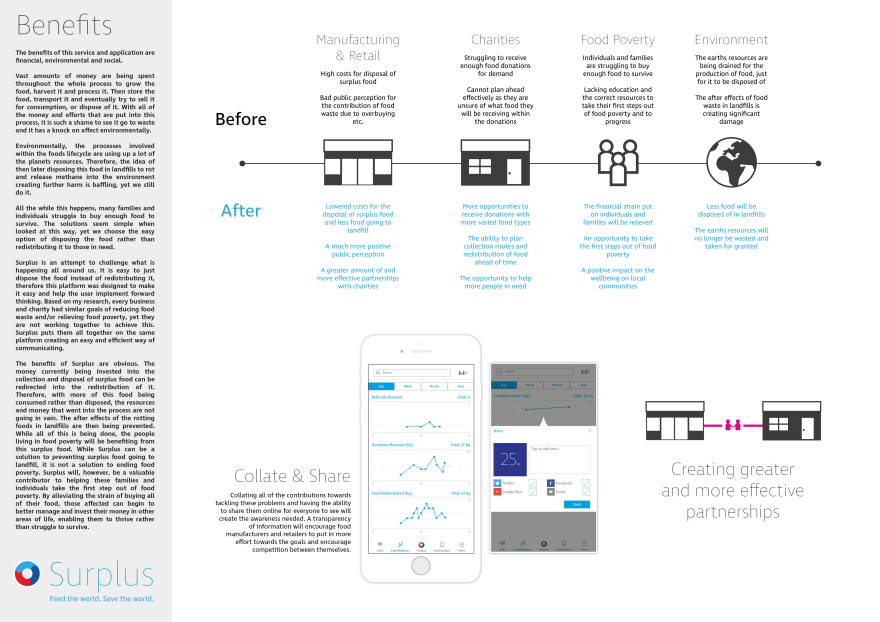 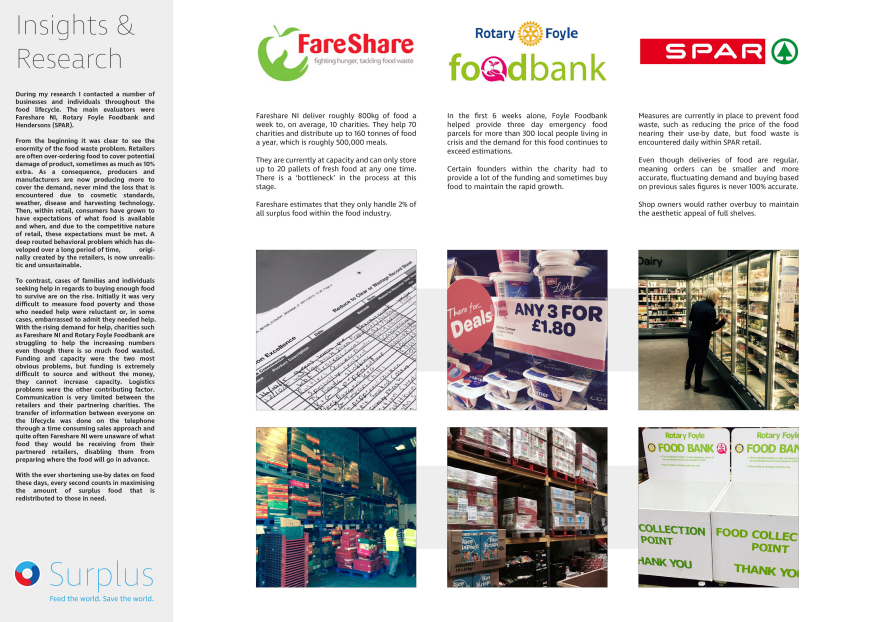 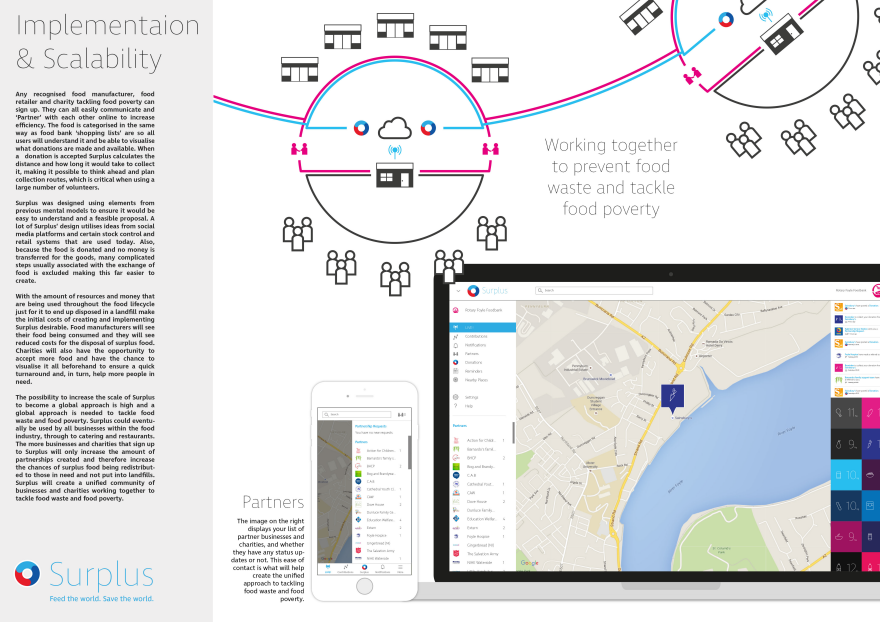 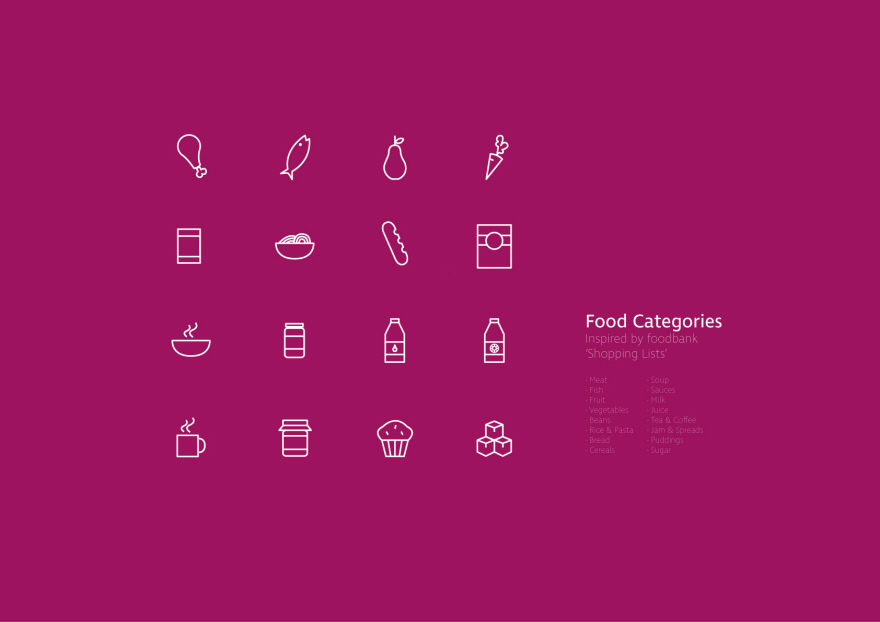 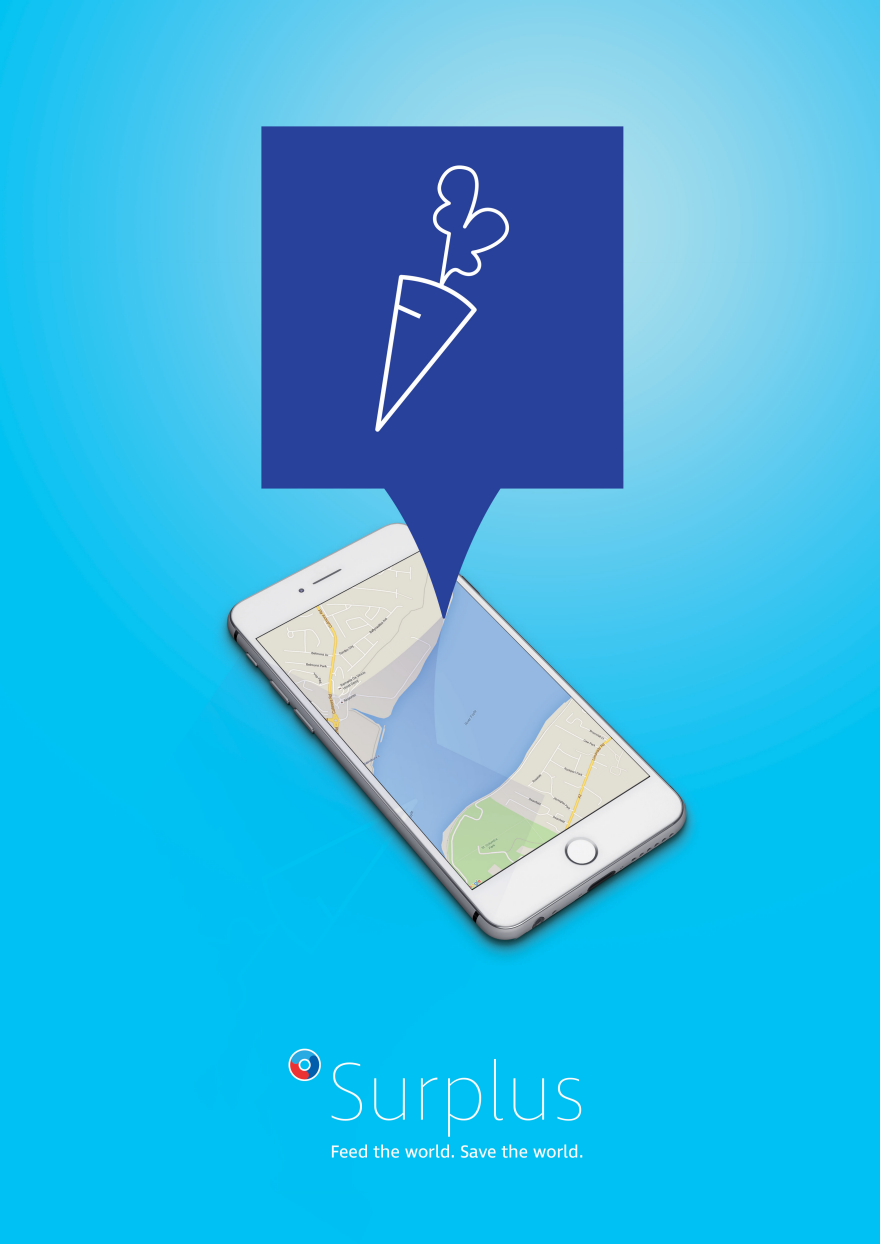 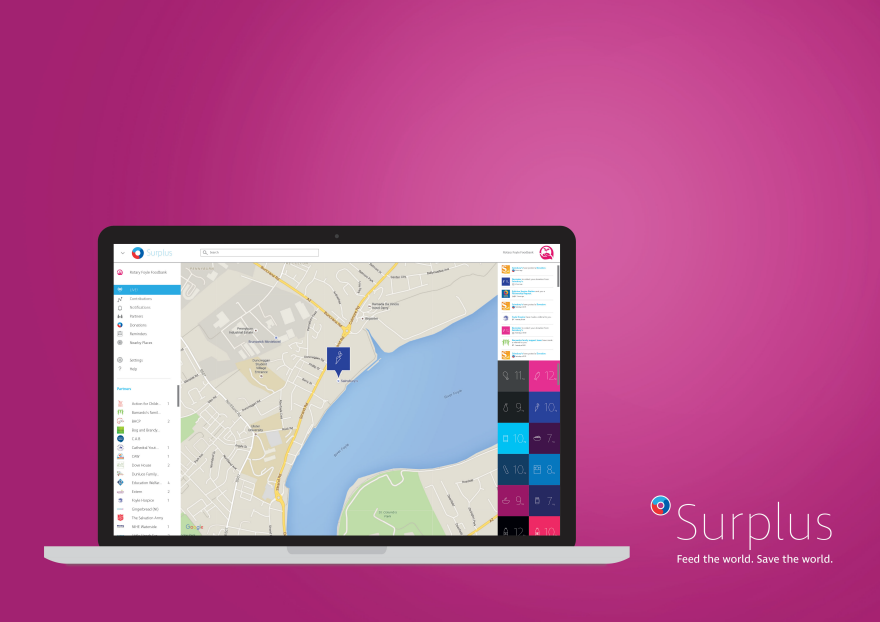 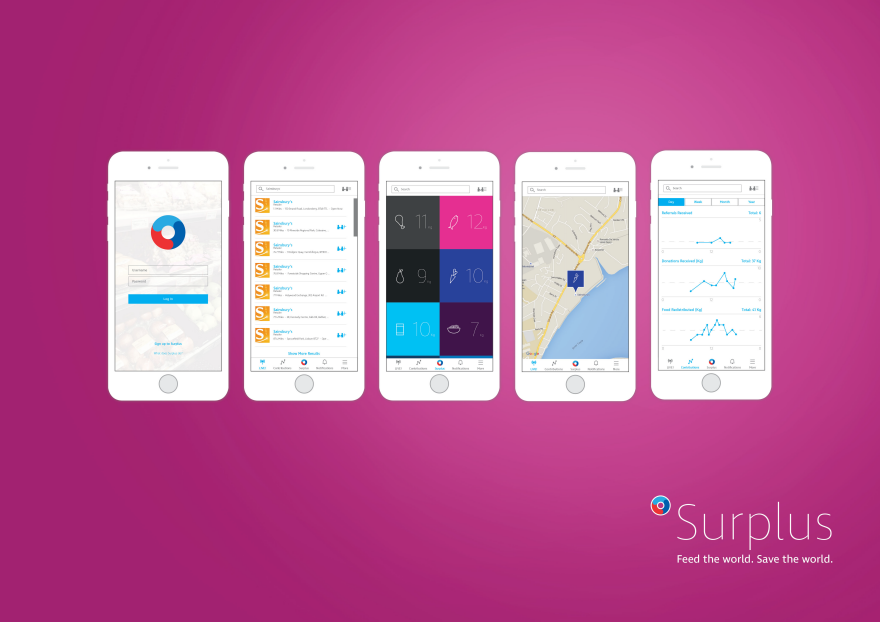 Surplus is a logistics service and application that enables food manufacturers and retailers the opportunity to donate any surplus, 'fit for purpose' food to their partnering charities. In doing so, more food will be redistributed to vulnerable people living in food poverty instead of being disposed in landfills.

Safe to consume surplus food can be uploaded onto this application, and made visible to charities in need, as a donation. The charities will be able to know exactly how much food is available and accept any donations that would apply to them.

With everyone involved on the same platform, a unified approach is adopted to tackle similar goals, a transparency of information is created and the process is made more efficient in order to maximise the amount of food that is redirected away from landfill to those that need it most.

The benefits of this service and application are financial, environmental and social.

Vast amounts of money are being spent throughout the whole process to grow the food, harvest it and process it. Then store the food, transport it and eventually try to sell it for consumption, or dispose of it. With all of the money and efforts that are put into this process, it is such a shame to see it go to waste and it has a knock on affect environmentally.

Environmentally, the processes involved within the foods lifecycle are using up a lot of the planets resources. Therefore, the idea of then later disposing this food in landfills to rot and release methane into the environment creating further harm is baffling, yet we still do it.

All the while this happens, many families and individuals struggle to buy enough food to survive. The solutions seem simple when looked at this way, yet we choose the easy option of disposing the food rather than redistributing it to those in need.

Surplus is an attempt to challenge what is happening all around us. It is easy to just dispose the food instead of redistributing it, therefore this platform was designed to make it easy and help the user implement forward thinking. Based on my research, every business and charity had similar goals of reducing food waste and/or relieving food poverty, yet they are not working together to achieve this. Surplus puts them all together on the same platform creating an easy and efficient way of communicating.

The benefits of Surplus are obvious. The money currently being invested into the collection and disposal of surplus food can be redirected into the redistribution of it. Therefore, with more of this food being consumed rather than disposed, the resources and money that went into the process are not going in vain. The after effects of the rotting foods in landfills are then being prevented. While all of this is being done, the people living in food poverty will be benefiting from this surplus food. While Surplus can be a solution to preventing surplus food going to landfill, it is not a solution to ending food poverty. Surplus will, however, be a valuable contributor to helping these families and individuals take the first step out of food poverty. By alleviating the strain of buying all of their food, those affected can begin to better manage and invest their money in other areas of life, enabling them to thrive rather than struggle to survive.

During my research I contacted a number of businesses and individuals throughout the food lifecycle. The main evaluators were Fareshare NI, Rotary Foyle Foodbank and Hendersons (SPAR).

From the beginning it was clear to see the enormity of the food waste problem. Retailers are often over-ordering food to cover potential damage of product, sometimes as much as 10% extra. As a consequence, producers and manufacturers are now producing more to cover the demand, never mind the loss that is encountered due to cosmetic standards, weather, disease and harvesting technology. Then, within retail, consumers have grown to have expectations of what food is available and when, and due to the competitive nature of retail, these expectations must be met. A deep routed behavioural problem which has developed over a long period of time, originally created by the retailers, is now unrealistic and unsustainable.

To contrast, cases of families and individuals seeking help in regards to buying enough food to survive are on the rise. Initially it was very difficult to measure food poverty and those who needed help were reluctant or, in some cases, embarrassed to admit they needed help. With the rising demand for help, charities such as Fareshare NI and Rotary Foyle Foodbank are struggling to help the increasing numbers even though there is so much food wasted. Funding and capacity were the two most obvious problems, but funding is extremely difficult to source and without the money, they cannot increase capacity. Logistics problems were the other contributing factor. Communication is very limited between the retailers and their partnering charities. The transfer of information between everyone on the lifecycle was done on the telephone through a time consuming sales approach and quite often Fareshare NI were unaware of what food they would be receiving from their partnered retailers, disabling them from preparing where the food will go in advance.

With the ever shortening use-by dates on food these days, every second counts in maximising the amount of surplus food that is redistributed to those in need.

Any recognised food manufacturer, food retailer and charity tackling food poverty can sign up. They can all easily communicate and 'Partner' with each other online to increase efficiency. The food is categorised in the same way as food bank 'shopping lists' are so all users will understand it and be able to visualise what donations are made and available. When a donation is accepted Surplus calculates the distance and how long it would take to collect it, making it possible to think ahead and plan collection routes, which is critical when using a large number of volunteers.

Surplus was designed using elements from previous mental models to ensure it would be easy to understand and a feasible proposal. A lot of Surplus' design utilises ideas from social media platforms and certain stock control and retail systems that are used today. Also, because the food is donated and no money is transferred for the goods, many complicated steps usually associated with the exchange of food is excluded making this far easier to create.

With the amount of resources and money that are being used throughout the food lifecycle just for it to end up disposed in a landfill make the initial costs of creating and implementing Surplus desirable. Food manufacturers will see their food being consumed and they will see reduced costs for the disposal of surplus food. Charities will also have the opportunity to accept more food and have the chance to visualise it all beforehand to ensure a quick turnaround and, in turn, help more people in need.

Looking at food distribution and waste in our current society is very important, and we liked how this project used design and technology to think about how to prevent all this waste from taking place.