After leading a team of military veterans into Haiti's devastated quake zone, Marine veteran Jake Wood knew firsthand that they were "very, very good at disaster response." Wood along with William McNulty and fellow Marines saw the opportunity to build a modern rapid disaster response organization. They also saw an opportunity to bring meaning into veterans' civilian lives. As a result, they launched Team Rubicon in 2010 with six US vets eager to transfer their battlefield readiness into frontline relief efforts.

Team Rubicon approached IDEO to help scale its global growth efforts and shape the future of the organization. After an eleven-week collaboration with government, military, and veteran groups, a vision for Team Rubicon Global emerged. The three-tier model consisted of an anchor network to share best practices across the organization and two supporting platforms designed to help countries with varying capacity and needs. 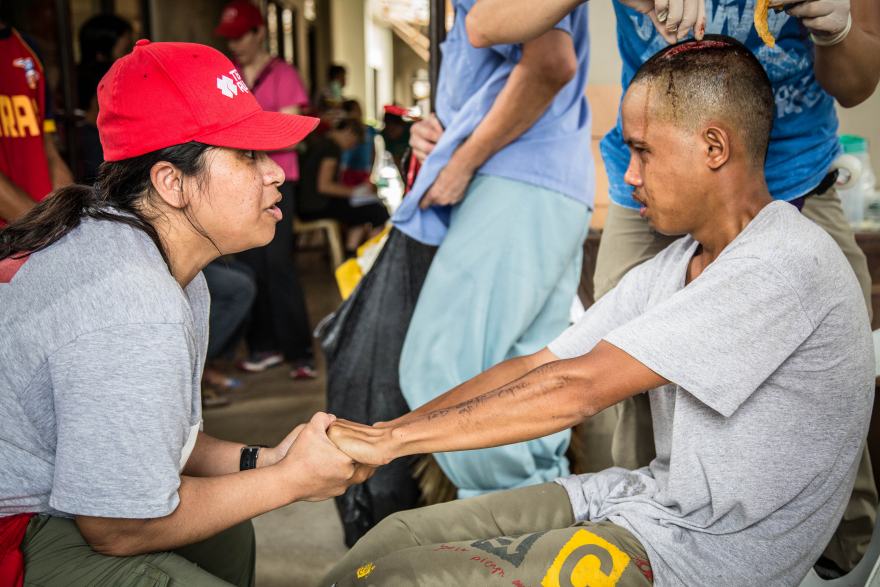 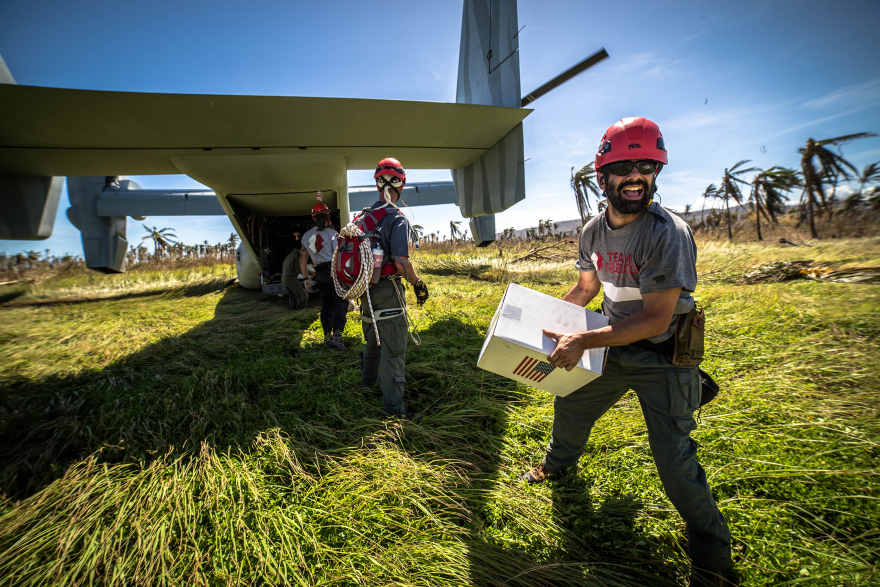 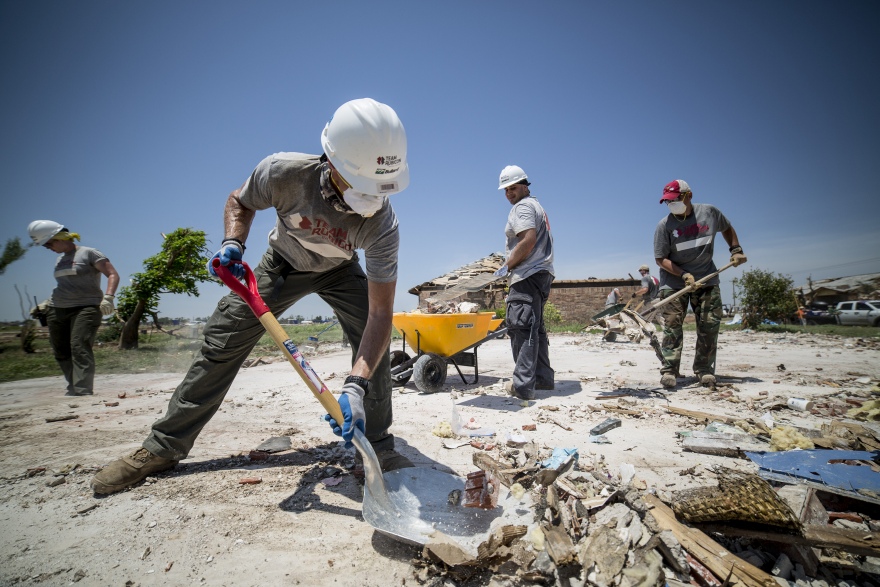 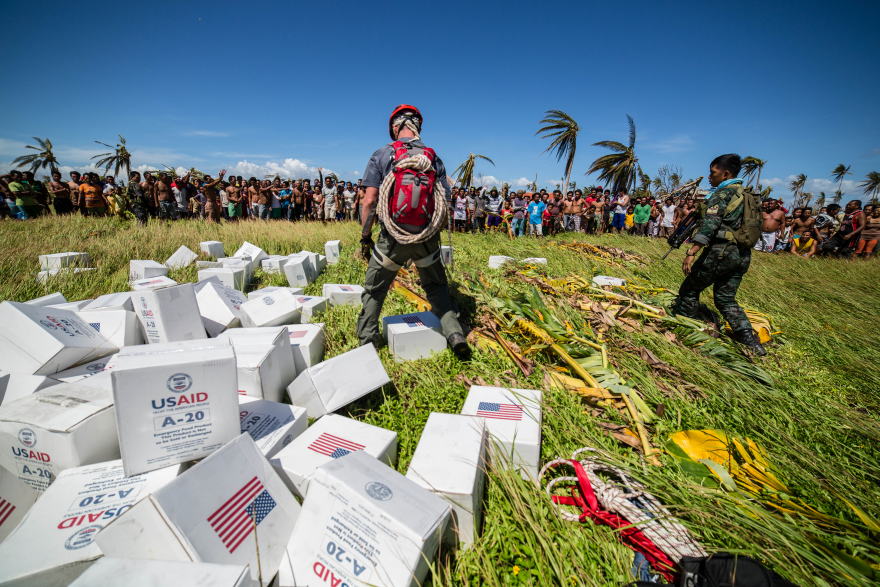 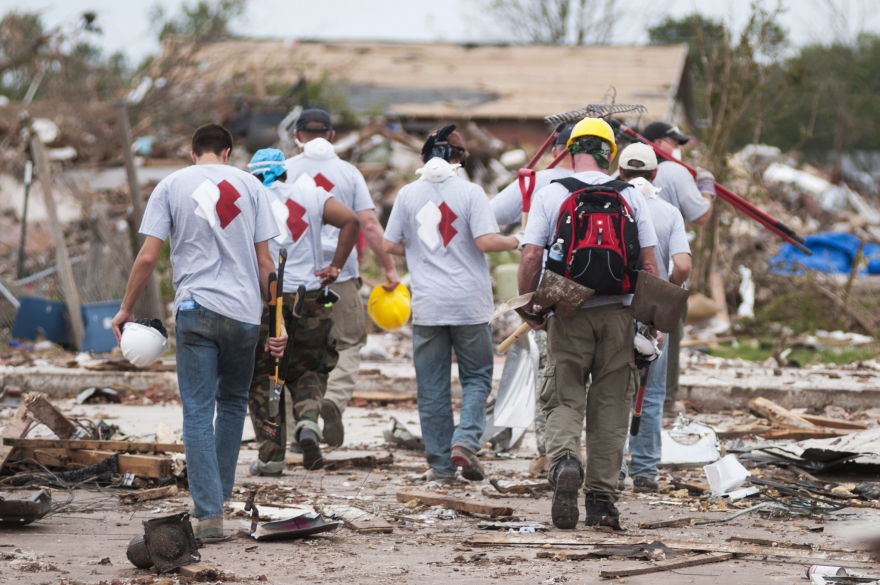 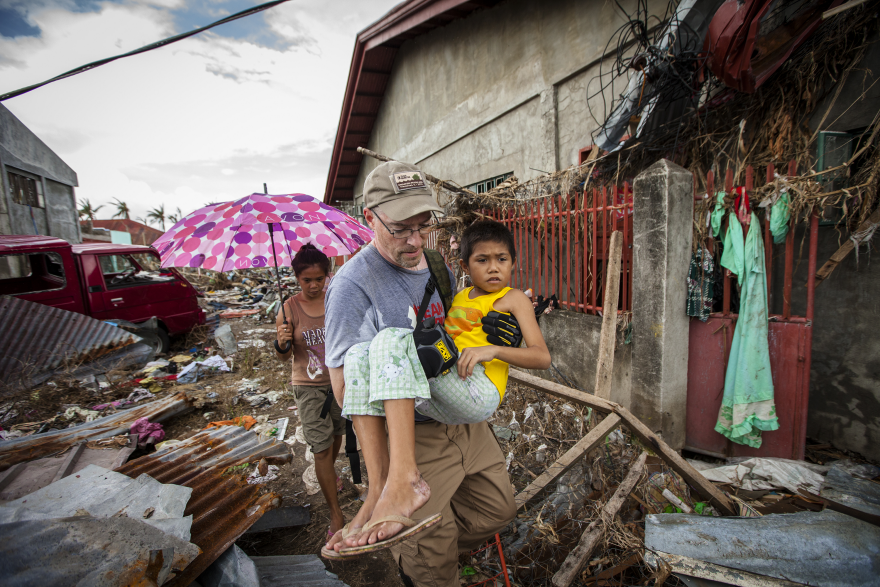 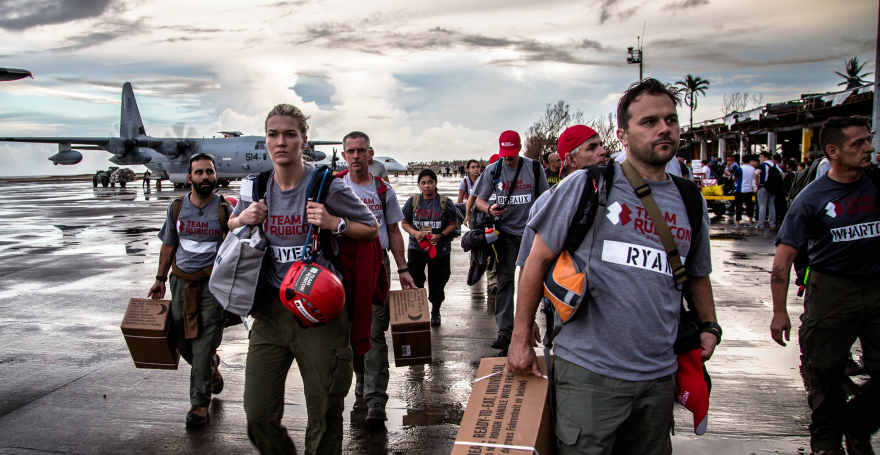 The Opportunity
Returning veterans miss a sense of purpose, community and identity. Team Rubicon, created by ex military, saw an opportunity to renew that purpose, and use veterans' military skills, such as being comfortable in chaotic situations, to also help victims of natural disasters.

After eleven weeks of collaborating with government, military, and veteran groups, a vision for Team Rubicon Global (TRG) emerged. Inspired by sources as diverse as TED and The Hell's Angels, IDEO developed a three-tier model, with an anchor network to share best practices across the organization and two highly active support platforms designed to help countries with varying capacity and needs.

The project challenge was taking an American-born organization—founded by former U.S. Marines whose success was informed by that same military DNA—and making it relevant, effective, and able to deliver impact in a diversity of countries.

Research
Team Rubicon was already successful in the US, in part because of the country's strong military culture. The challenge was taking the magic and scaling it globally. In doing so, the team had to understand what was unique about their culture. Experiencing the culture of Team Rubicon first-hand appreciably informed the project's direction and outcome. Traveling with TR, the IDEO team wore military backpacks the entire time and were able to experience reactions as we traveled around the world, such as the acknowledgement we'd get from other vets. We bunked up in the same military hostels, bonding as a team on the road together.

It was a uniquely visceral aspect of the design collaboration—trying to walk in the footsteps of the clients. In the Philippines, the team met with people to find out what happened during and immediately after Typhoon Haiyan—specifically what formal and informal support systems and responses worked or didn't work, and what people needed most in the first 72 hours. We walked through streets in the Philippines devastated by the typhoon. IDEO team members got a first-hand account of everything TR volunteers did—transporting bodies, assisting at field hospitals—so we could understand the emotional experience and community appreciation, and everyone pulling together.

In the UK and Norway, the team met with first responders and emergency management professionals, who were involved in responding to major floods in February 2014. The team spoke with the armed forces and the Foreign Service, NGOs, and humanitarian and charitable organizations to learn about funding and other fiduciary support. We also spoke with members of the national global response system, finding out who works with whom, and what systems are in place before, during, and after a disaster.

The team also researched analogous organizations and potential markets, analyzing the existing success of Team Rubicon, and talking to veterans and disaster victims to inform the design process. We looked to the edges for inspiration, exploring a range of organizations and movements both extreme and ordinary—groups as varied as the Hell's Angels and National Public Radio in the US. We highlighted best practices of organizations that have successfully scaled with novel approaches to their business – exploring themes of common identity, brand loyalty, organic growth, self-organization, and membership/chapter approaches to provide financial support. Using extreme examples helped us show Team Rubicon the full range of organizational design available to them.

Empathy underscored the mission to understand what made the Team Rubicon model so successful. The IDEO team gathered insight from volunteers, veterans, active duty military members, and Team Rubicon staff to identify key attributes. Synthesizing their input required wrapping our heads around lots of complexity and developing design outcomes that dealt with tangible rather than abstract topics.

For example, in the Philippines, and later in Norway and the UK, a storyboard artist worked with us to tell a generalized but illustrative end-to-end story of veteran deployment. Through this simple, beautiful storyboard technique, we could unpack the details captured and discuss them on the road. (One illustration demonstrated how US veteran volunteers traveled to disaster locations on donated airline tickets; another illustrated that a US veteran might need a permission letter from his employer to take time off work at short notice). As well as helping capture valuable local detail (which helped us design TR X and TR Ready), storyboarding also helped with prototyping some of the conversations we wanted to have with future potential partners.

Strategy & Approach
Team Rubicon brought a strong point of view to what the design should look like, and IDEO helped to rethink the organizational hierarchy—ultimately flipping it. Positioning Team Rubicon Global at the bottom of the hierarchy, as a facilitating platform, dramatically reframed the project. IDEO provided a lot of inspiration to show TRG why this approach would be more effective than a top-down model of command and control. This approach put the veterans and disaster victims in a far better position to be the beneficiaries of TRG's work.

By "reverse engineering" the existing structure, we identified the key attributes and attitudes to carry forward expansion. Exposure to Team Rubicon USA also helped us understand which markets would be a good fit for a Team Rubicon organization and what existing aspects would need to be adapted to local conditions.

Within this framework, IDEO designed a network to deliver across three tiers. The underlying tier (Team Rubicon Global) is a global organization that acts as the connective tissue, able to unlock and activate the power of the network. The second (Team Rubicon X) is a set of country organizations based in nations identified as having large veteran populations already focused on domestic and international disaster response. The third (Team Rubicon Ready) is a set of country organizations based in countries considered highly vulnerable to natural disasters and largely focused on domestic and regional disaster readiness.

Global Impact
Since 2010, 35,000 US military veterans have volunteered through Team Rubicon, eager to transfer what they've learned on the battlefield into disaster relief efforts. Veterans from outside the US have also started to participate, forming bonds with other veterans across continents, who share a need to keep serving their communities after military service ends. The design solution—a three-tiered global model—taps into Team Rubicon's growing global engagement, increasing its footprint, resources and capabilities for emergency disaster response.

Team Rubicon Global now connects veterans with world-class rapid disaster response capabilities across continents to help victims. It also helps give veterans a sense of purpose reintegrating into civilian life, while taking advantage of the unique skills they learned in the military in the service of serving those hit by a disaster. It is this sense of community, identity, and purpose that veterans miss most when they leave service and take off their uniform. Team Rubicon Global gives veterans another opportunity to draw on their military spirit and serve through humanitarian efforts around the world. Two-fold, tapping into this unified sense of purpose results in more feet on the ground to help those in need during times of need.

Team Rubicon Global coordinated its first deployment in April 2015, when a 7.8 earthquake rocked Nepal. Just days after the earthquake, a coordinated multi-national effort saw two waves of Team Rubicon volunteers deploy and collectively log 7,968 hours to aid the Nepalese people. According to Vince Moffit, Team Rubicon USA Incident Commander, that incident alone validated the network effect of IDEO's work. "We couldn't have done this without Team Rubicon UK," he said. Nepal is a good example of how a rapidly deployed mission with international collaboration creates such a positive knock-on effect. General Sir Nick Parker, speaking to the London Evening Standard, called the US/UK Nepal operation, executed in just 48 hours, "a life defining moment." After its success, and recognizing how "brilliantly" Team Rubicon has worked in the US, Sir Nick noted how veterans were "really engaged and focused in rescue and reconstruction across the world." The Nepal deployment has led Sir Nick to build TR's UK team, now with a pool of 250+ British veterans ready to deploy anywhere within 24 hours.

We chose this because it was serving a real world need in a new and exciting way.

We thought their “bottom-up” model, allowing different teams to run very locally specific solutions for their issues with central support, is a great way forward for the organization.