A Digital Information Service for Refugees in Europe

Aimed at refugees coming to Germany, Denmark and Scandinavia, the Refugee Text Service fills the information void created by an ever-changing political landscape. It provides refugees with access to information about who they can talk to, what they can expect, and what their options are, depending on their situation. The content is provided and updated by NGOs and volunteer organisations as well as a variety of experts in Denmark, Sweden and Germany.

The service is introduced to refugees before they reach Denmark - distributed by volunteers, NGOs, sim card providers and through social media. It is accessed via SMS, allowing any refugee with a phone to get verified and updated information directly to their handset. It also provides contacts for experts and locals willing to assist individuals in need. 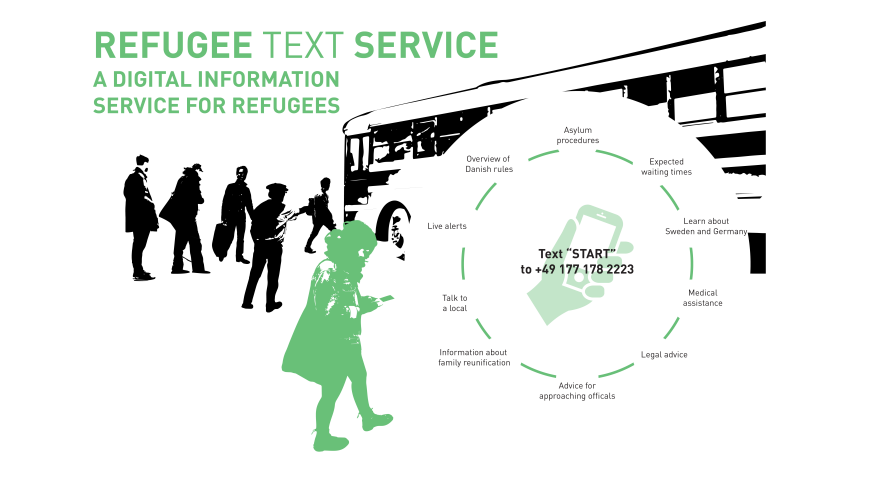 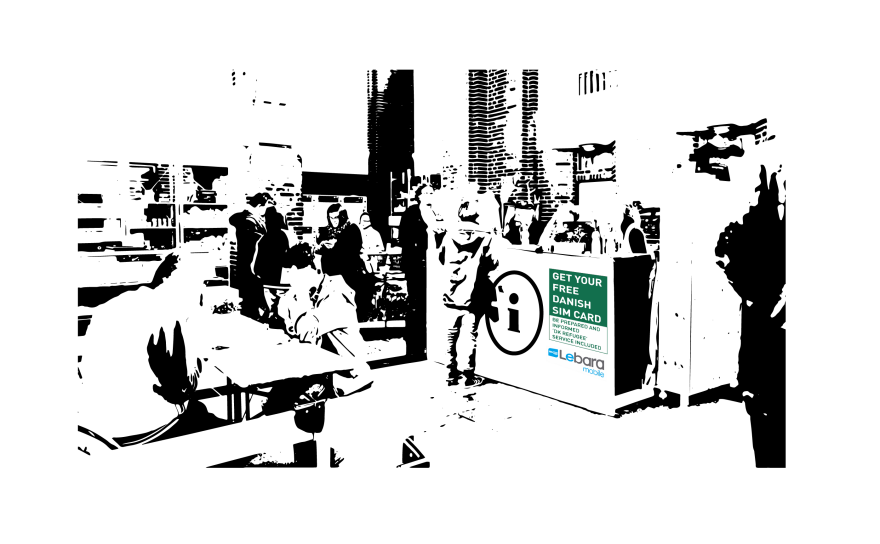 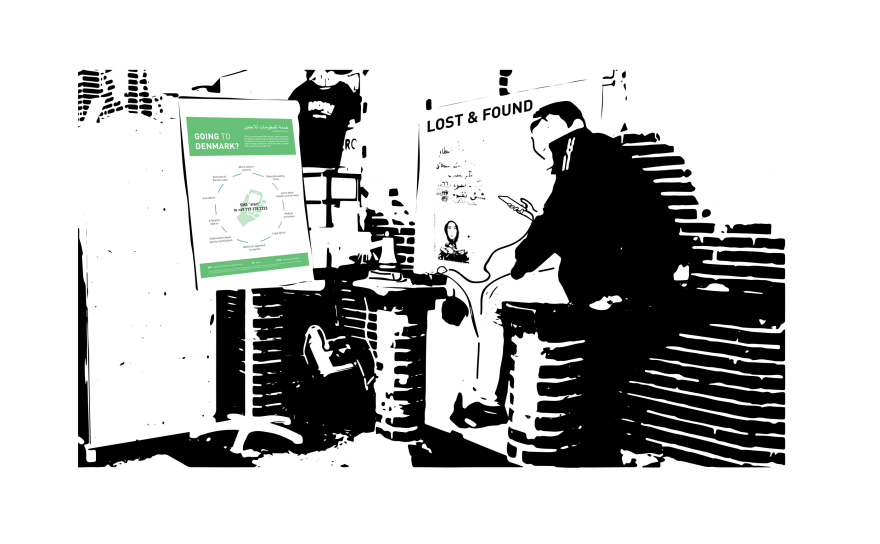 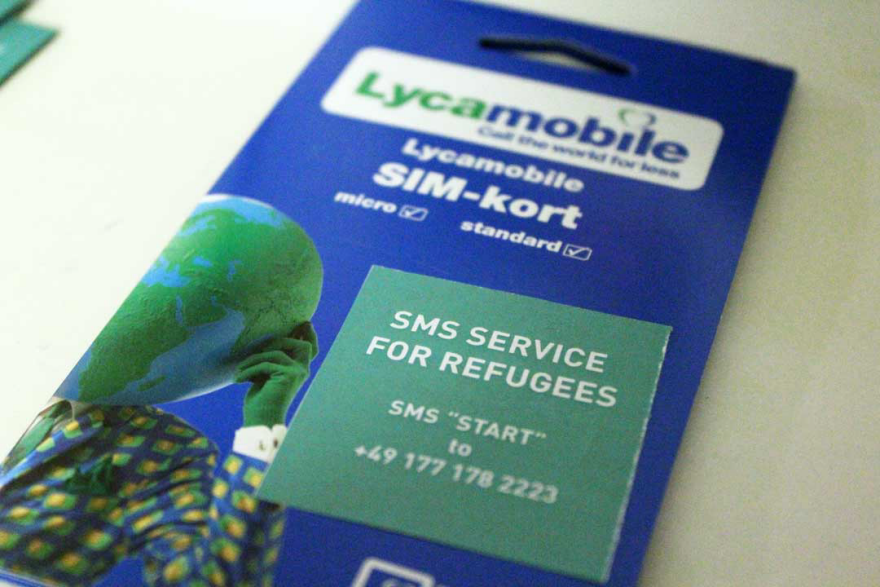 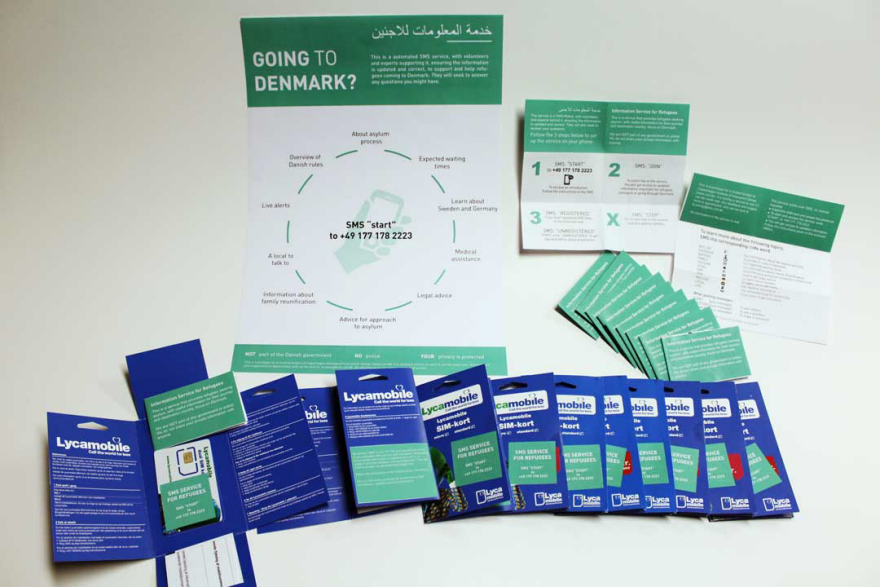 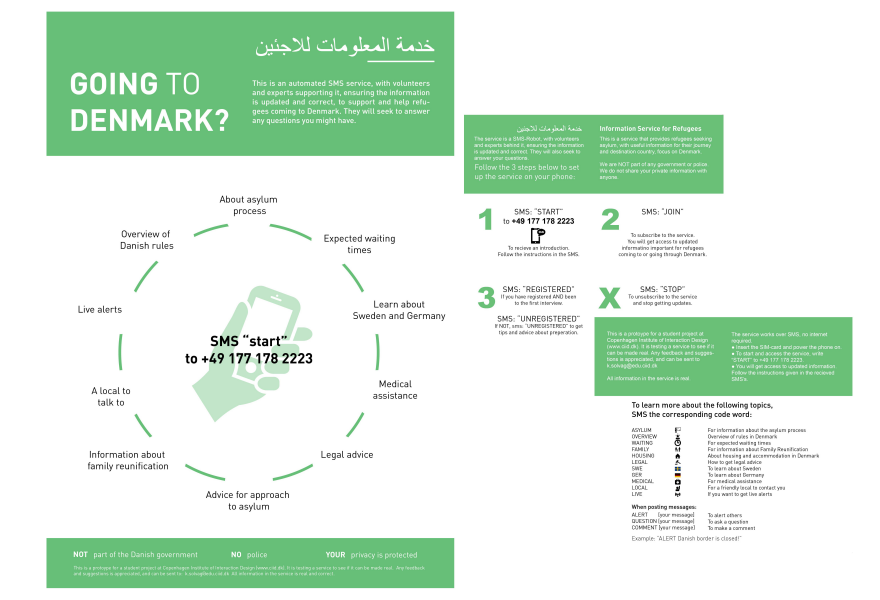 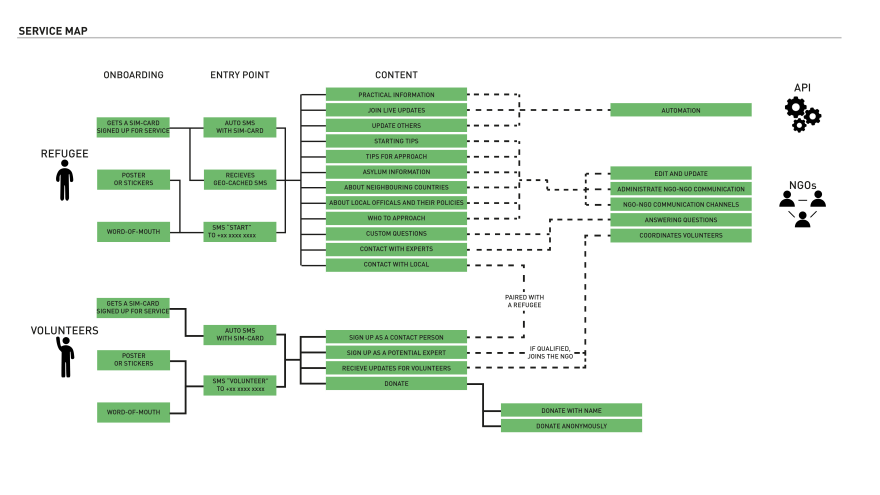 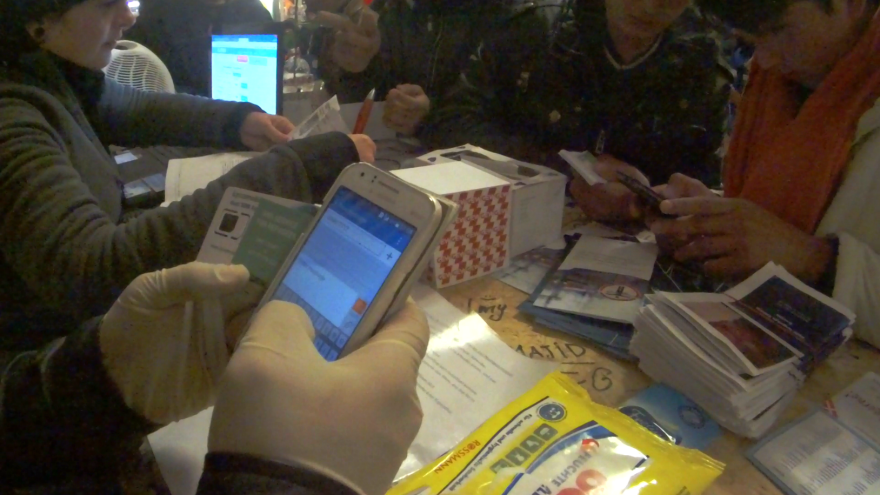 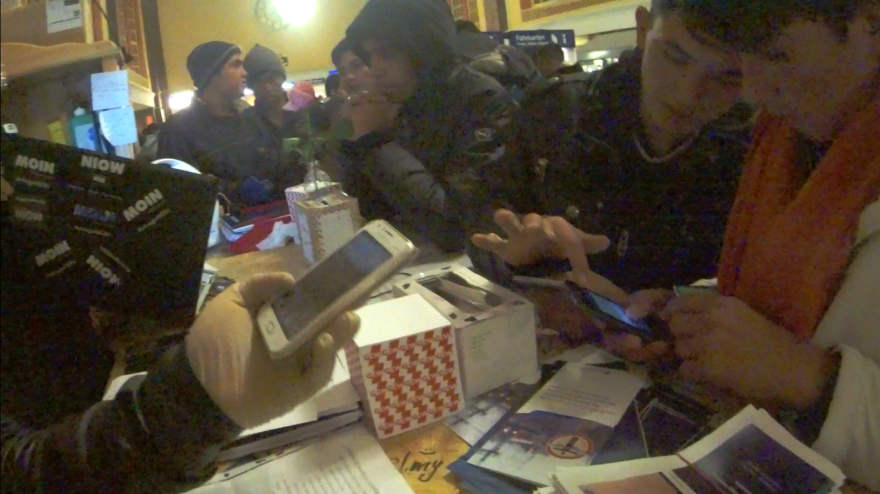 My starting point for the final project at CIID was the humanitarian crisis in Europe, caused by the increased number of people seeking refuge in Europe, the lack of systems in place to cater for them, and the lack of any clear EU political solution. I spent the first four weeks of my process, researching the domain, informing myself through desk research, expert interviews and volunteer activities on what the situation was like both on the ground and at a larger, political scale. Beginning with only the topic word 'refugees', I worked on establishing contacts, observing and interviewing people on-the-ground and scoping possible opportunity areas.

Refugees seeking asylum in Europe is not a new phenomenon. However, the scale of the crisis in 2015, caused partially as a result of refugees finding their own routes to Europe, has caused the systems in place to fail. I chose to focus on Denmark and neighbouring countries, with the research spanning from refugees on their way through Europe, to the end of the asylum procedure and integration period. This user journey spans from 4 to 15 years in Denmark, due to the asylum and integration processes in place. In this initial research phase, I interviewed experts, NGOs, volunteering initiatives, activists and refugees.

When I started, I was keen to work closely with refugees and learn from their experience first-hand. As soon as I met new arrivals to Denmark, the gravity of their situation was striking. It was clear that traditional user-centric approaches would be difficult to carry out. I adjusted my approach and met them as a friendly local rather than as a designer with an agenda. The experience of helping refugees as well as the relationships that were created, allowed me to gain a better understanding of the journey they had taken, their values and needs, without using more traditional interview approaches.

As my starting point was so broad, beginning with only the topic word 'refugees', a lot of work went into immersing myself in the topic, building contacts and mapping out what was currently being done. I identified an extensive information gap for refugees approaching Denmark and in the early phases of the asylum process. Because refugees apply for asylum upon arrival, and not through the system in the region they flee from, it meant there was no system within Europe to handle the large numbers arriving to Europe. Additionally, the asylum process is very complex and important to understand, to avoid pitfalls, which can often result in deportation or a process that can take many years. This has caused a great need for more accessible information, that can better prepare refugees for an extensive asylum process, in specific European countries.

By law, refugees who are unregistered and travel within Europe, are considered illegals, which further complicates the situation. In Denmark especially, larger NGOs had no presence at the borders or the hotspots refugees traveled through. It was volunteering civilians who organised themselves to help the refugees who were coming - learning by doing. There was not any proper reception for refugees arriving in Denmark, and as the situation evolved, borders began to close down to paperless refugees and refugees of specific nationalities. In this desperate situation, the first people these refugees met were the police. Because of traumatic experiences, most refugees were very skeptical towards any authorities, afraid and exhausted by the long journey. In this first meeting, and the initial phases of their asylum process, it is critical that they have a basic understanding of what to do and what to avoid. With the police stopping refugees at borders, NGOs and legal advisors only meet refugees after they have been registered, and have given their first testimonial. The reach of NGOs is limited, with their current methods of face-to-face meetings in the major cities, and to their websites, which is often only provided in Danish and English. Many refugees don't learn about their rights and possibilities until it often is too late. These findings argue for the importance of having early touchpoints, before refugees arrive in Denmark, to enable them to be more prepared when approaching officials, and to make more informed decisions early on in the process.

The refugees we see today are not aligned with the clichéd stereotype of refugees of times gone by. Earlier in 2015, refugees were dubbed "Techfugees" by some media sources. Considerable numbers of refugees are highly educated and are not necessarily very poor. It was estimated that 80% of refugees have a smartphone, and their use and dependencies on them have been evident. Two of the first things refugees seek for when they arrive in a new country is a SIM-card and a Wi-Fi connection. This has enabled them to stay connected with friends and family, plan routes, react to, and avoid dangers, and inform themselves about Europe. Because of this, numerous apps and websites have been developed in the last 6 months, aimed at refugees coming to Europe.

Through the process of immersive people-centred research, I built an extensive knowledge and empathetic understanding for the journey these human beings have been through - as well as the shortcomings of the current systems. I identified and prioritised relevant design potentials and opportunity areas.

I went forward with 3 main areas, reception; to create a more dignified and respectful entry to a country as well as to the asylum process. Inform; educate refugees and volunteers about the asylum process and laws, to help refugees make more informed decisions about their future, where to go and how to approach officials. Communication; providing the means for NGOs and volunteers to better communicate and coordinate their efforts.

Through ideation with classmates and experts, and drawing on insights, especially from meeting refugees and volunteers in the Danish-German border area, the concept of an information service based on SMS was formed. The use of SMS as a media is a simple and cost efficient way to enable refugees to interact with the service without downloading or signing up to anything over internet. Once the refugee learns about the number, the service will always be accessible with any charged handset and SIM-card. The texts will always be accessible once received, capture more attention by being in a less crowded channel and easy to forward to others.

Since SIM-cards are one of the first things refugees seek during their journey, it became an obvious onboarding touchpoint for the service. When prototyping the service I handed out SIM-cards at a transit hotspot in Germany, with the service advertised. This proved to be very popular among refugees and volunteers, where 7 out of 11, signed up to the service. An ideal partner for distribution would be a SIM-card provider, to draw on their current infrastructure and touchpoints with this target audience.

Through my personal experiences with refugees, work with volunteers and experts, I chose the content and features in the service, which can be seen in the Service Map diagram.

The scope is to provide refugees crucial information about approaching authorities and asylum information as early as possible. The service works as a proxy for existing services provided by NGOs, so refugees can contact them. One of the main findings from my personal contact with refugees was the value of talking to them as a friendly local. This led to the feature of allowing locals to be connected to refugees, anonymously through the service. From talking to Danes, most people want to help, but the threshold of committing to an NGO or any time-consuming activity, is often considered to be too high. This feature would allow locals to play an important role in refugees' lives, by simply conversing with them through text. The experience and impact of this feature was prototyped in low-fidelity through my correspondence with refugees over social media.

In the concept development, I worked closely with asylum experts in Denmark and a volunteering initiative in Flensburg, Germany. I prototyped the SMS service and the touchpoints in increasing fidelities, with asylum experts and classmates. In Flensburg, a hotspot for refugees coming to Scandinavia, I conducted most of my prototyping. Due to the vulnerable situation the refugees were in, I was eager to ensure that the service was only prototyped when it could be of use to them. This was the catalyst for me creating a functioning version of the service, using an SMS gateway and a domain logic service to create and automate the service.

To test potential onboarding touchpoints, I brought various printed media, SIM-cards and posters to volunteers, which advocated the service to refugees. Some of these prototypes can be seen live in the experience prototype video.

With an ever changing political and policy environment, the need for updated and trustworthy information is crucial. A digital platform, with information sourced by multiple NGOs responsible for smaller domains, allows the content to be easily updated, translated and distributed over a large region, providing information about many countries. The SMS service would continually be adapting to the current situation and the need for information.

As this is such a huge issue facing our world today, to us this service was an incredibly kind and generous way to approach it.

Without going into the larger issues of such a turbulent situation, it has the power to give people who are in the worst situation anyone could imagine, hope and kindness in the face of a daunting journey.