Recent advancements in technology are enabling individuals to take charge of their own energy production. This allows us to rethink how we produce and distribute energy. We have designed the service, Arcs The Energy Collective, as a way to manifest future opportunities that could arise when local energy is produced alongside that of big electric utilities. Arcs is a service that facilitates a financial link between personal producers and consumers. Arcs allows people to buy renewable energy directly from producers in their own neighbourhood (utilizing the local grid) and from national sources when needed. 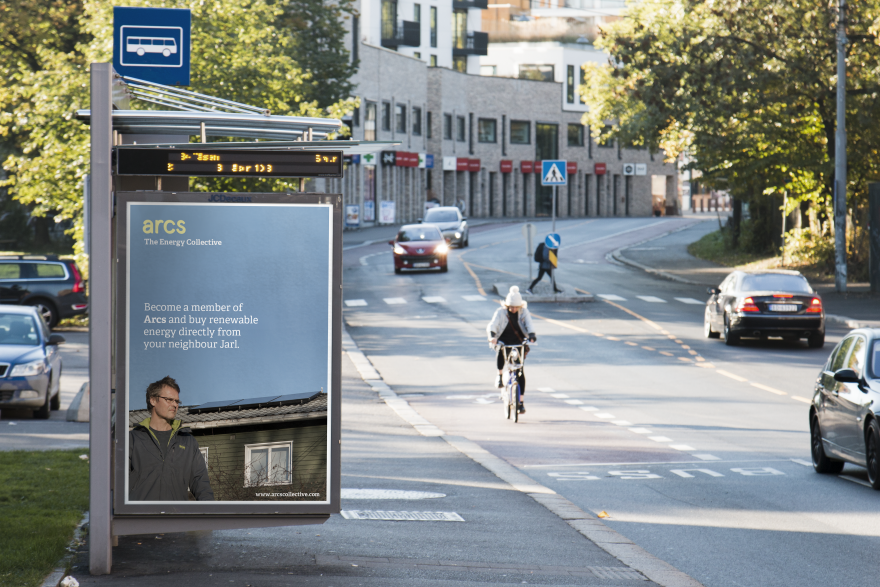 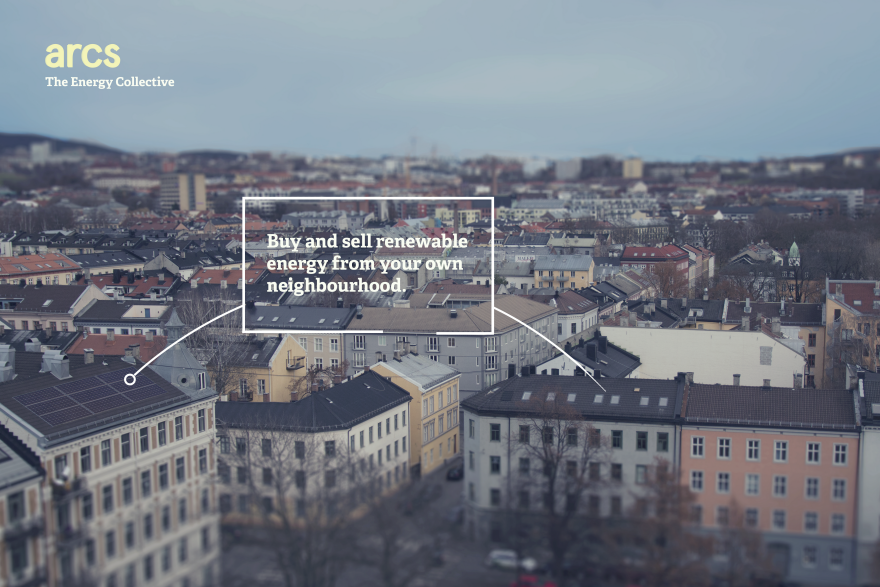 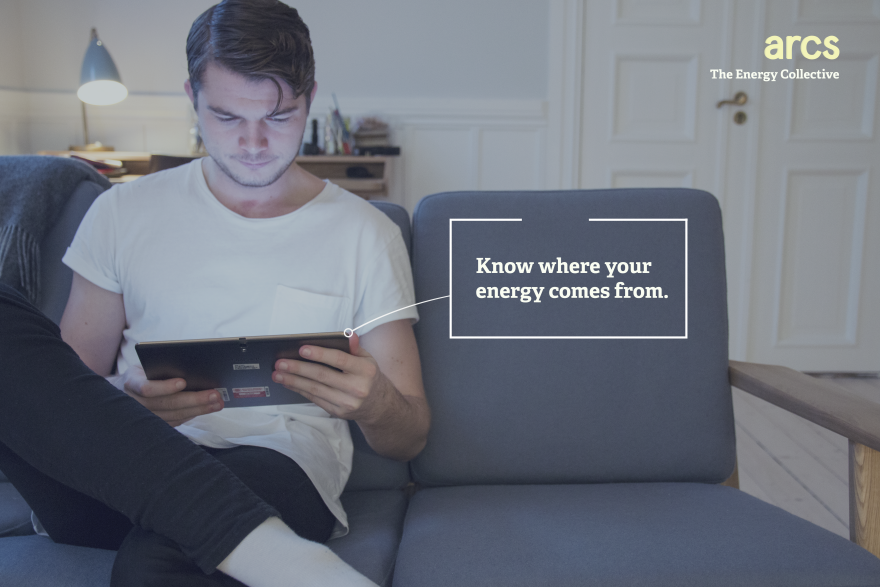 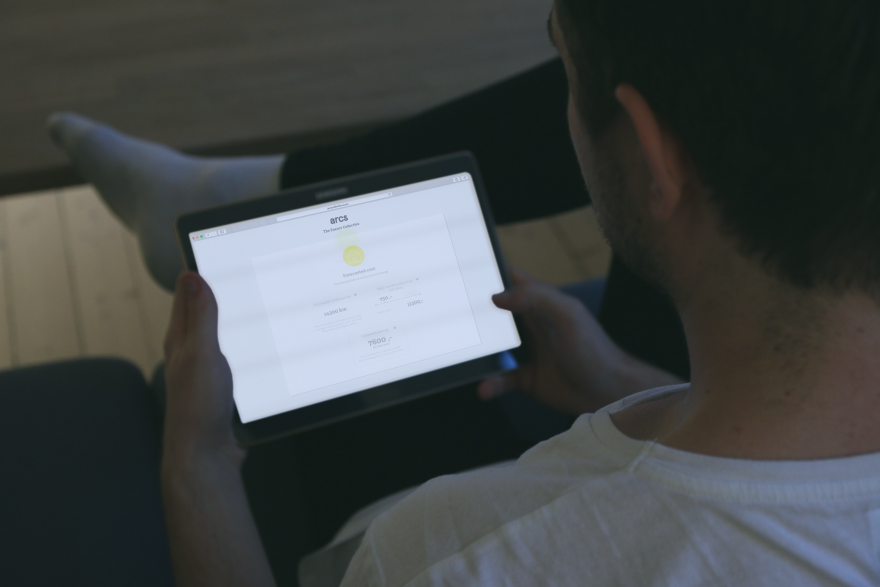 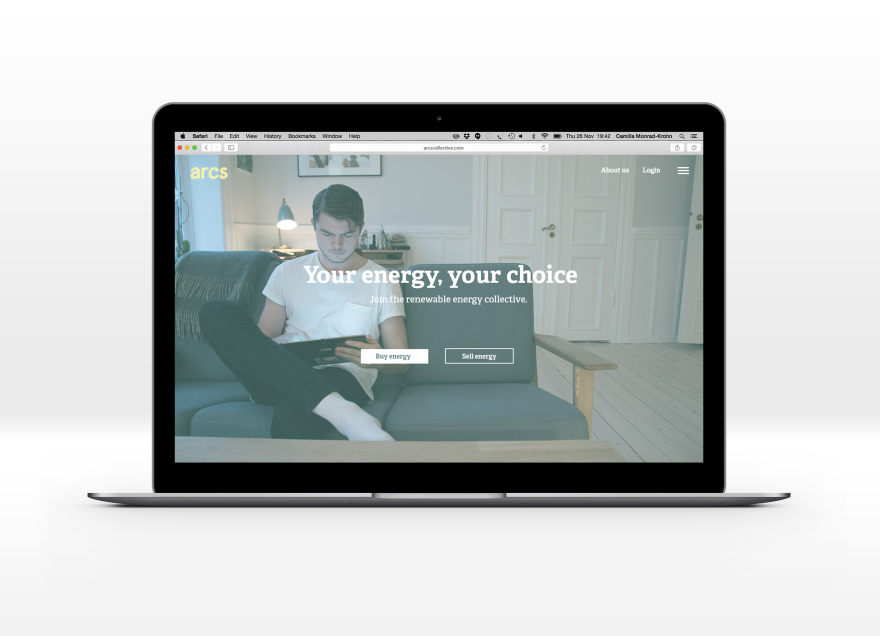 This project is about exploring energy-producing neighborhoods. Recent advancements in technology are enabling individuals to take charge of theirown energy production. This allows us to rethink how we produce and distribute energy.

We started this project with the intention to explore the service opportunity in energy-producing neighbourhoods. Access to cheaper and more advanced technology has created an environment in which more and more people take part in producing their own energy. Energy production and distribution has been a technology- and engineer-driven field. Now, more and more service providers are seeing the potential in the market for local energy production and distribution.

The aim of this project is to explore the possibilities in tomorrow's energy production and distribution system. We wanted to investigate the service potential within a future context and see if this investigation can teach us something about today's system.

Harvesting energy from the sun using solar panels has become drastically cheaper in recent years, and this is the technology most adopted by smaller, local producers today. Solar power production is also easily scaled up or down, depending on the size of the project. Additionally, this type of production is renewable and can be built on existing infrastructure. Based on our research, we believe that solar panels will be the number one technology used for producing energy locally in the future.

Solar Power as an Offer of Service

There are already many services aimed at lowering the barrier of investing in local energy production. One of the services is Google's Project Sunroof. Here one can easily get an overview of possible savings by installing solar panels, and it is easy to come into contact with an installer. There are also services that offer loans, leasing or renting plans for consumers.

Through contact with consumers that have invested in solar panels themselves, we realized that some of the obstacles actually lay within the distribution system itself. The system we have today is not built for the type of development where individual homeowners contribute to the national grid.

Part of this project was to research the current production and distribution system. By using mapping as a method to visualize physical infrastructure, actors and cash flow, we managed to have a good understanding of the current possibilities and challenges in today's system.

By investigating the trends creating change, we have defined two scenarios towards which the development of local energy distribution and production could move. The scenarios represent two divergent directions based on different ownership and cultural adoption of production technology.

The first scenario is the consequence of a development where the traditional electric utilities manage to keep control over all production both locally and nationally. They can offer services that are so good, there is no point using other services. An alternative is that the utilities convince politicians to use the law to stop any personal initiative. In this scenario, all production is owned by big actors, and the grid is the same model as today.

The other scenario is the consequence of a development where people take control over their own production. When more and more people become independent, it results in less and less people sharing the cost of the national grid. Fewer costumers would increase the cost of being connected to the grid, and more users would have an incentive to become independent. Local production can undermine the electric utilities to such an extent that the traditional actors disappear all together, and the national grid disappears with them. This is referred to by many as the utility death spiral. In a situation like this, people would have to take charge of their own energy production, and it would most probably be new actors and services on the market in order to meet the demand of energy.

We have used design as a tool to explore the two scenarios by designing service encounters based on existing actors within a future landscape. This has made it possible for us to investigate what the different scenarios entail on a deeper level.

Exploring the scenarios by designing services made it clear that we should try to combine the scenarios.The services we created showed us that there is a need to create an incentive to keep people connected to the grid, or else we might lose the grid altogether. This might work for some people, but it is not an optimal solution, as we saw when we explored the landscape.

We design for maintaining the national grid, supporting local production and enhancing investments in renewable energy production. This is a way to keep a stable infrastructure with predictability and access for the consumer while at the same time opening up for personal initiatives, stimulating more renewable production and shifting some influence back to the users.

We have designed a energy transaction service called Arcs. Arcs is an online market that facilitates a financial connection between personal producers and consumers. This allows users to buy energy directly from producers in their own neighborhood, using the local grid. This will make it more profitable to sell energy locally and hence stimulate local production. Arcs will buy energy from the national grid to cover the usage that it can't cover with local production. This will create a market in which the energy-producing actors we have today can create value. We hope this service example will make it easier for the decision-makers to see that there are opportunities in a hybrid system. This should, in turn, help the involved actors make more informed choices going forward.

Arcs - The Energy Collective is only a concept, but it can teach us something. It is possible to make a service that can create an incentive for local production of renewable energy while also maintaining the grid as an important and valuable infrastructure. We think this will be good for both the local producers, the consumers, the grid operator, the big energy producers and the planet. However, if we want to see services like this in the future, a few things will have to change:

Open up for a Direct Sales Model.

Changing the legislation to allow for direct sales between private consumers and producers. This can be done by letting Arcs be the producer in legal terms on behalf of all the local producers.

To stimulate local distributed production, it must be cheaper to transport energy locally. It seems natural to split the net tariffs into one local tariff that covers the distribution grid and one national tariff that covers the transmission grid. Therefore, customers only pay for the energy that travels through the distribution grid. If the energy has to go through the transmission grid as well, customers will have to pay for that, too.

The tax model of today's energy is per kw/h bought from the grid. Users can avoid paying the tax by making private, independent systems. A system in which the producer does not have to tax the energy he is "buying back" from the grid will slow down the development of totally independent systems. In Norway today, consumers can receive subsidies to install solar panels on their roofs. In other countries, customers are payed for the energy they deliver to the grid (feed in tariff). We think it is wiser to use that money to ease the burden of taxes on energy produced locally instead.

We believe that the actors that are producing all the energy today will need to change their value proposal. As more and more people start to produce their own energy, these actors can create value by offering safety. They have the possibility to use their know-how and financial muscle to build storage and buffer capacity more cheaply than if people do it themselves. Additionally, they could use that to offer energy when local production cannot meet the demand.

When the actors and politicians lay the groundwork for future services in energy production and distribution, they should center it around the consumers and producers needs. This should be done with a focus on creating an understandable system. A system that provides good user experiences.

The students were really able to understand the eco-system in a very broad way and come up with also governmental legislations, so it was with a very broad view with a touch upon quite a number of things which are really relevant in making next step in this area.

They also explored the business value, the cash-flow and the streams of money in the system because it becomes a very important aspect in addressing eco-systems like this.

This project thinks of energy consumption in a different way, of solar power as a service.

It is still a concept, so things have to be proven, but it had the ingredients that we thought were promising.