Post/Biotics is a citizen science platform that enables general public (children, curious geeks, DIYers, backyard scientists) with platform and tools to let them help in scientific research for new antibiotics.

Sir Alexander Fleming found first antibiotic known to us, Penicillin when he saw that fungus growing on the petri-dish was killing the bacteria. This radically changed healthcare, operations were no more life threatening and people did not die of small infections. He also warned us while he received his Nobel Prize for the discovery that we must be careful with how we use antibiotics as bacteria could soon develop resistance to it if not used effectively. Unfortunately we are soon retracing back to pre-antibiotics era. We are facing a massive antibiotic crisis in the future, we are exhausting our existing ones far too fast than finding new ones.

A lot of the antibiotics we have found so far have come from natural resources: plant extracts, algae, fungus, soil have all yielded good antibiotics. Thus a new antibiotic could be lurking anywhere, even in your backyard.

WHAT IF THE WORLD'S NEXT ANTIBIOTIC IS IN YOUR BACKYARD?

Post/Biotics offers a chance for everybody to become a "Fleming". It is a science lab in a box that anyone can use to help test new samples in their surroundings to test for their antimicrobial values. The database generated by lots of Post/Biotic toolkit users goes back into scientific database and is then further validated by microbiologist and scientists that are working on researching on new antibiotics.

It looks at science as a collaborative effort, what happens when the tools to do perform science are available for everyone, how does that change how research is conducted, how discoveries and inventions are made? And how does that value our esteemed scientific achievements such as Nobel Prize? 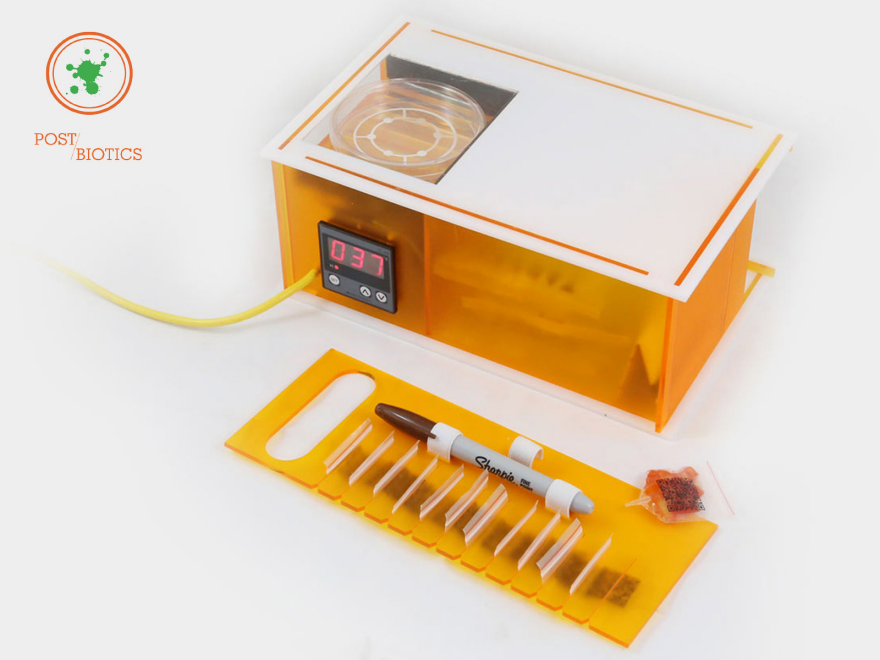 Post/Biotics Solo Kit™ Solo toolkit is a lab in a box that is ideal for a solo user. Whether you are a backyard scientists, DIYer or looking for an interesting science project. Jasinth MV 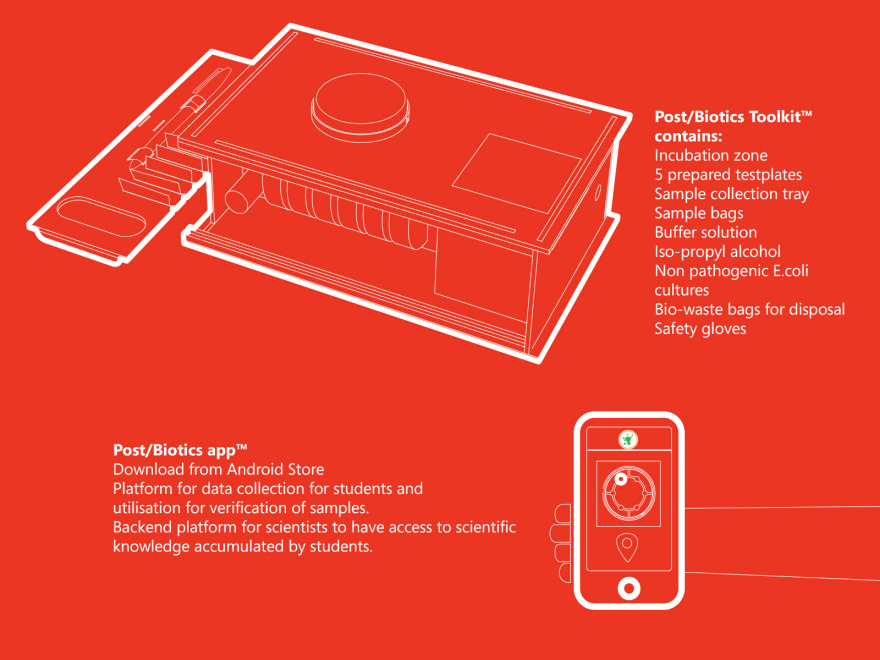 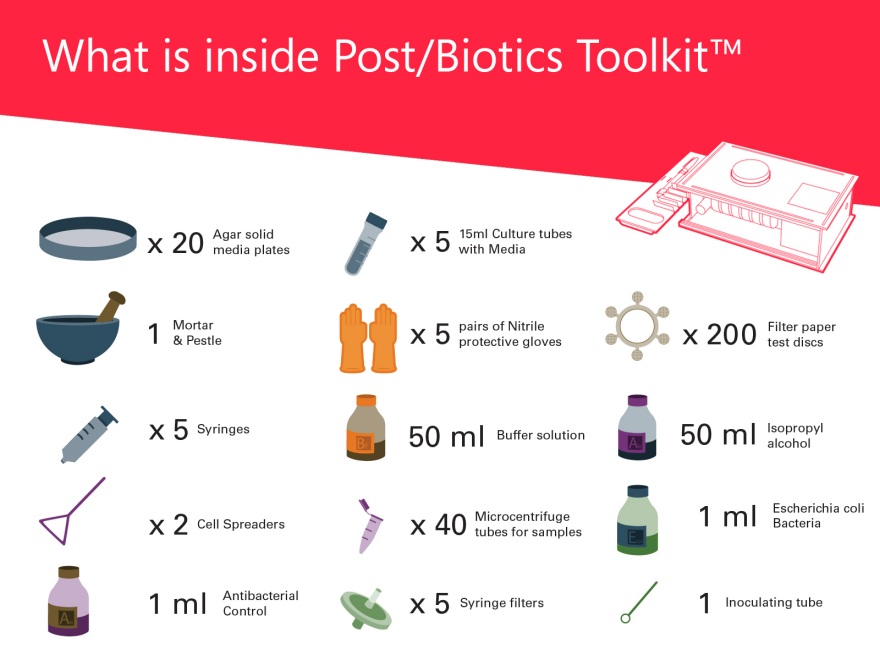 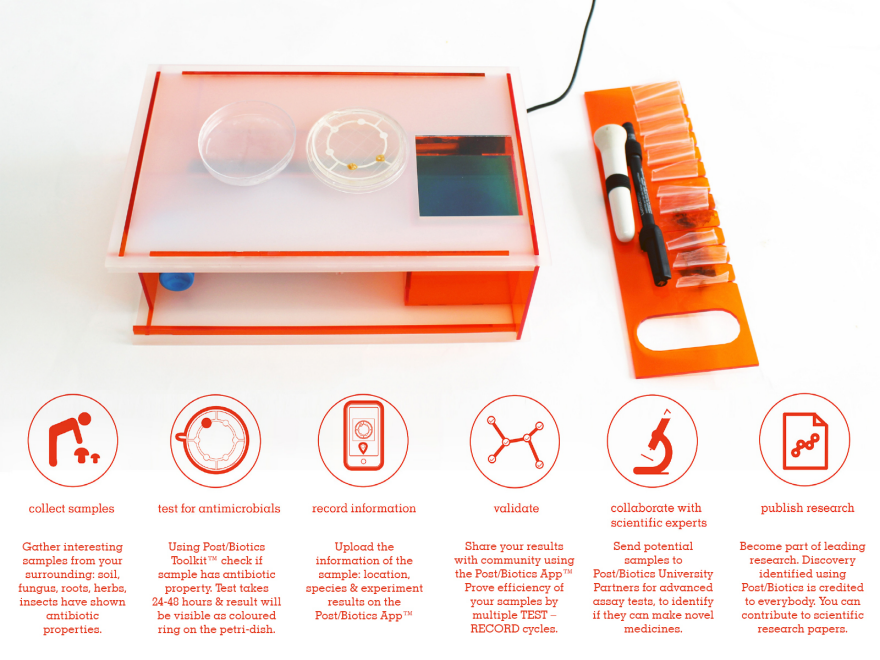 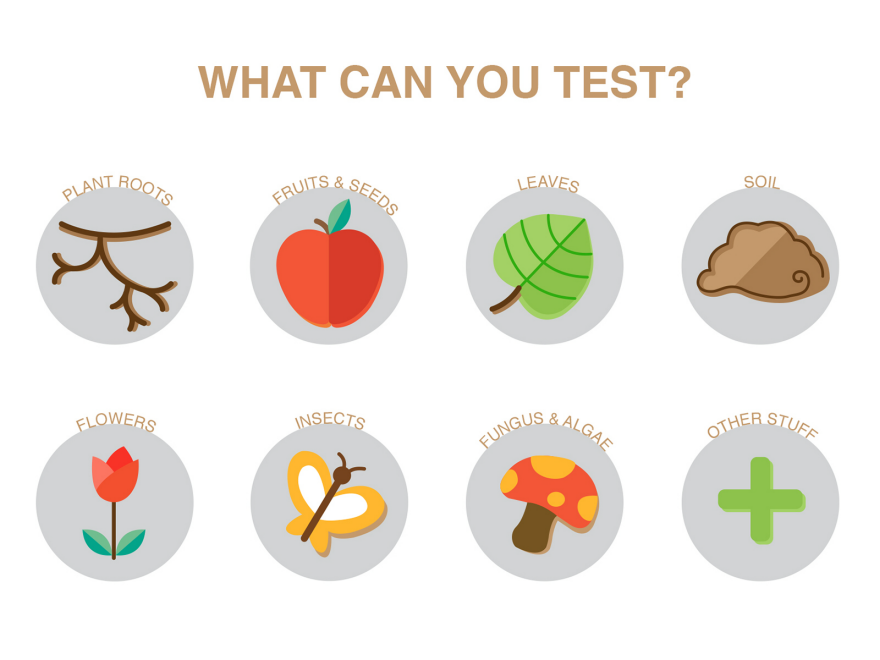 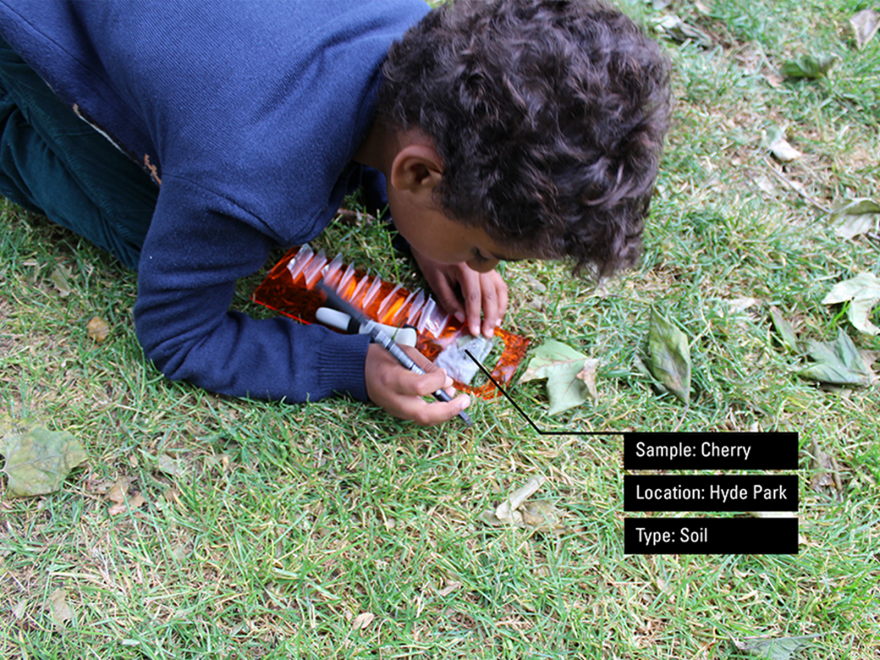 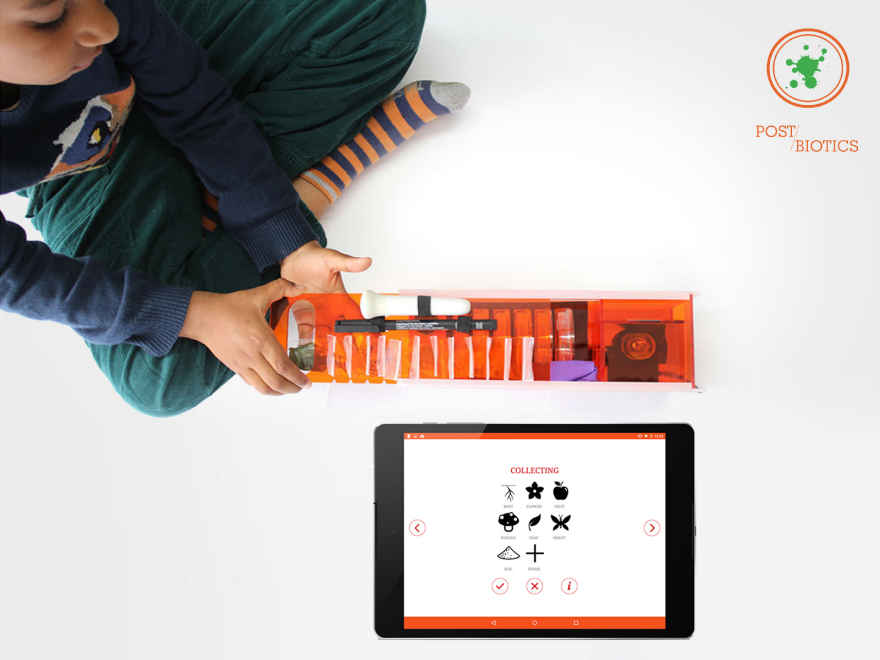 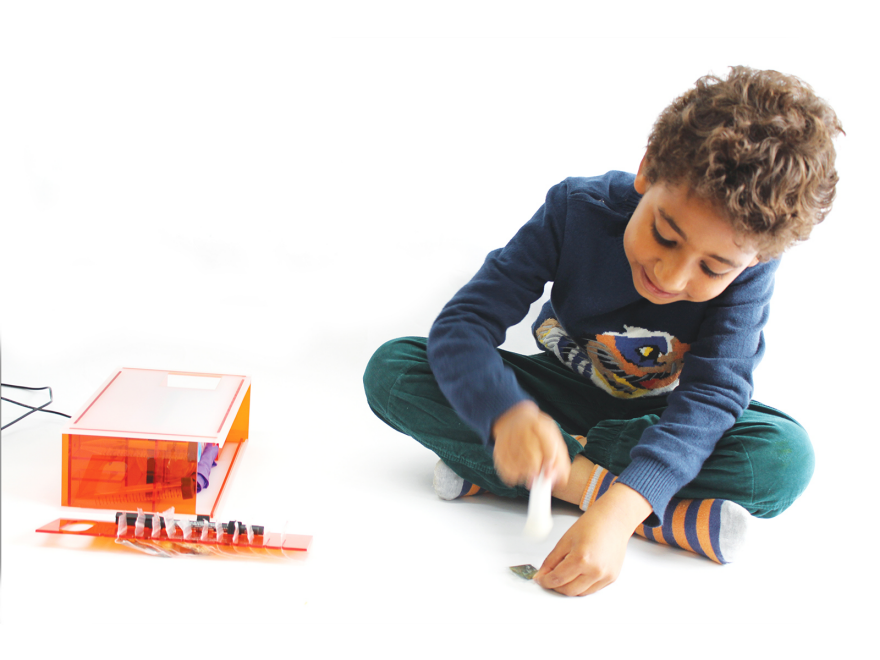 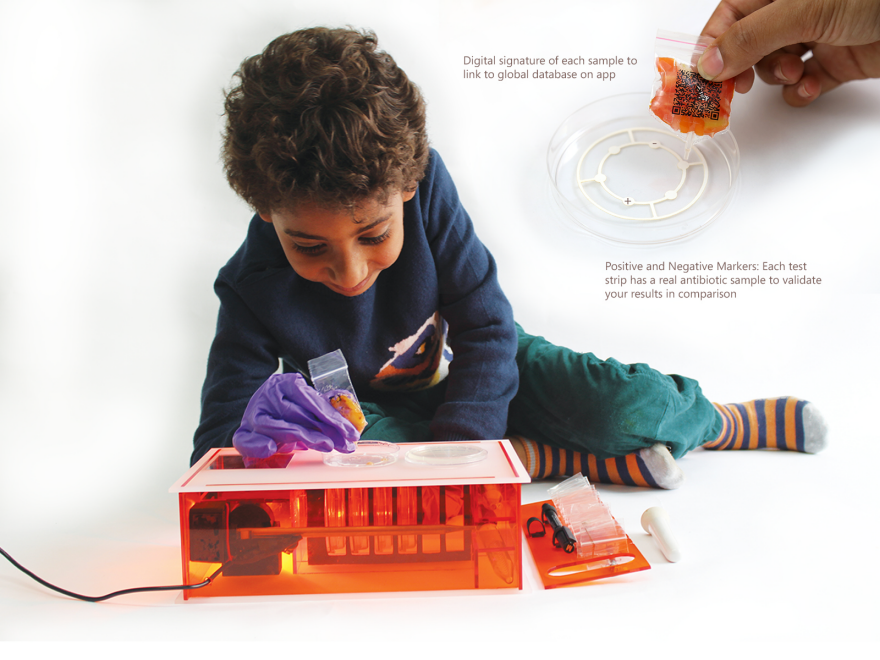 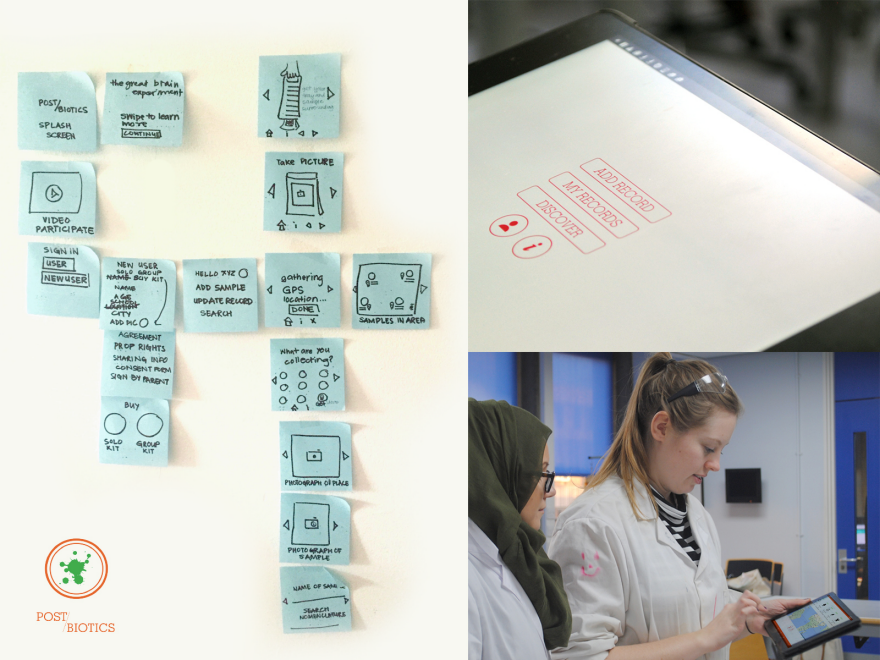 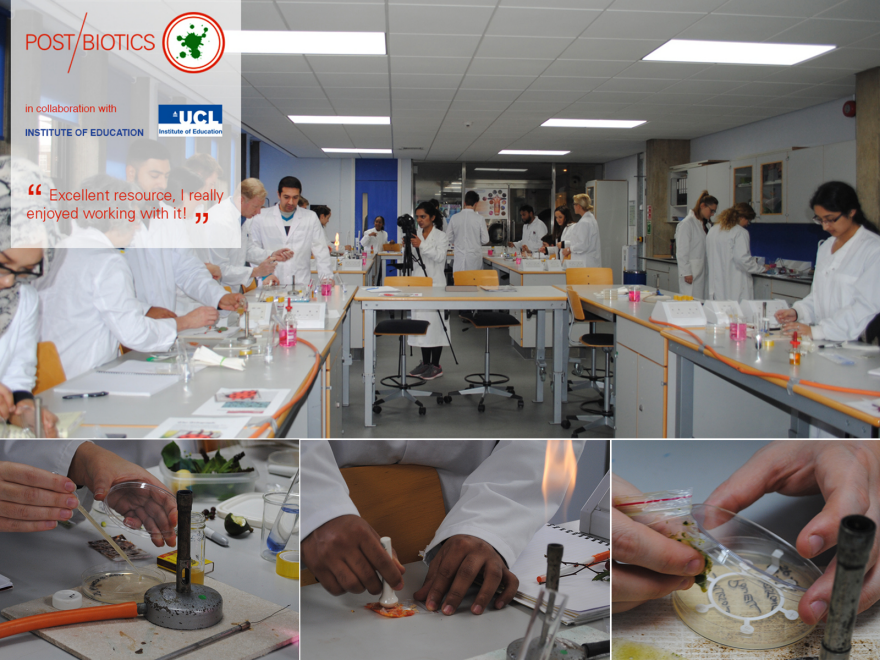 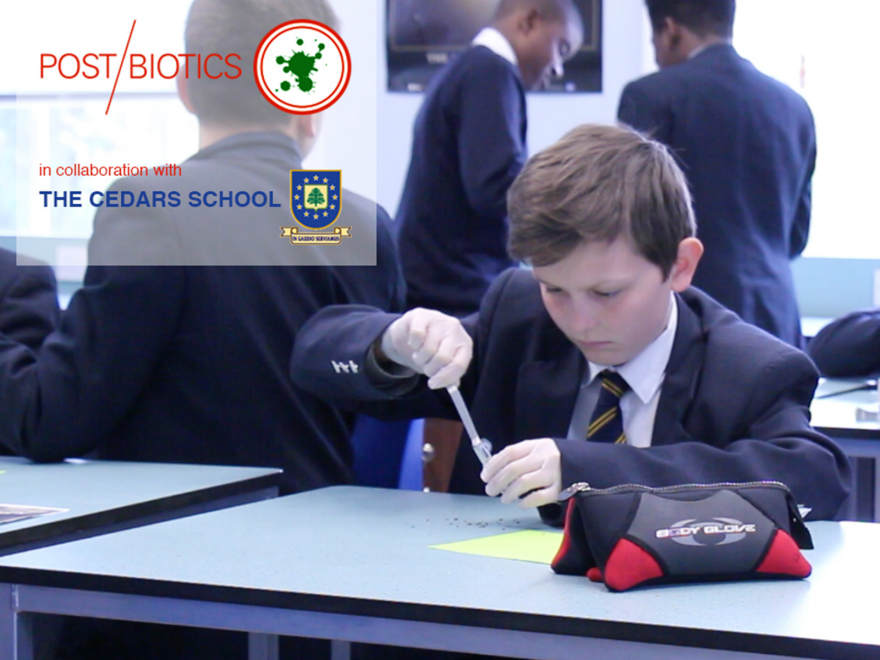 The use of antibiotics has enabled us to cure many diseases. However, current excessive usage, in particular the continued prescription of antibiotics to treat viral diseases to promote faster growth of animals in food production, increases the resistance of pathogenic microbes, resulting in a loss of efficacy of antibiotics. This poses an urgent threat to global public health and increases the cost of healthcare. WHO has declared antibiotic resistance as global health care crisis and has warned that if immediate action is not taken we shall soon be pushed back to pre-antibiotic era where simple infections and operations could be life-threatening.

We cannot expect a few scientists to solve our problems, we need everybody.

Most known antibiotics are developed from natural extracts, implying a potential new antibiotic could be anywhere. Post/Biotics distributes empirical research to the public by creating a platform and the according tools for participating in this process. The pop-up lab allows anyone to discover substances with antimicrobial values by testing locally available plants, vegetables, fruits, fungi, mushrooms & soil. With the help of the corresponding app, the results are stored on an online platform to create a library of antimicrobials. The value of this "microbial fingerprint" of our environment is significantly important for developing new drugs.

By partnering with universities & pharmaceutical companies, the massive costs for finding new drugs can be diminished when giving access to this platform.

Users test their samples like a crushed bark of a tree in their backyard with the toolkit that contains E.coli bacteria. If the tested tree bark has antimicrobial properties, it will be recognized by the platform and the user is encouraged to submit the original platform. Using gamification, users are incentivized to test different samples, geographical areas, and to use their peers for verifying their findings.

TECHNOLOGY AND ITS POTENTIAL

Post/Biotics is a science pop up that comes in the size of postable box and that allows citizen scientists to participate in discovering substances with antimicrobial values by testing locally available specimens such as plants, vegetables, fruits, fungi, mushrooms and soil.Leading scientific journals have established that chances of finding the next new antibiotic are the highest in soil, previously under-explored places and natural extracts.

Users test their samples such as a crushed bark of a tree in their backyard on the Post/Biotics toolkit that contains E.coli bacteria. If the tree bark has antimicrobial properties, it will stop E.coli from growing which would reflect a change in colour on the petri dishes where the sample is tested within the tool kit. This indicates that the sample is of potential interest. The toolkit contains Biosafety Level 1 substances, ie, non-pathogenic, non-toxic substances that are safe to be used for kitchen biology experiments. This means that using the tool kit cannot cause any diseases or infections while being used by people.

The data collected by users is mapped on a virtual platform that collects the GPS location, the sample name and a photograph, as well as specificities of the outcome of the test for building a global database. Such a method takes in the potential lack of scientific know-how of the participants, and shall therefore be validated by multiple citizen scientists before further research by scientists. When an interesting sample is recognised by the database, the user will be asked to submit the original sample to Post/Biotics or any selected collaboration partner for further studies. The research facilities then perform series of assays on the sample to firstly confirm if the substance submitted has antimicrobial properties and secondly investigate into the root/basis of those properties.

Discovering new antibiotics requires a lot of patience, but in this project, they make it more approachable.

We liked the generous and hopeful aim of getting younger people more involved in science and technology.