In 2018, even as the tiger census across India was underway, over 100 tigers were found dead. Electrocuted, poisoned, poached or strayed into highways and towns. These cases are not limited to tigers alone. Leopards, deer, elephants, pangolins, and other scheduled species have been threatened. Injured tigers and leopards, develop a taste for human flesh, become man-eaters and stop hunting natural prey. The animals cannot be relocated and must be shot down. Poaching, habitat loss, and conflict from human contact has strained our relationship with wildlife and we must design more inclusive responses to improve it. How might we improve our relationship with wildlife, and strengthen the delicate relationships between stakeholders?

AiCatcher is an intelligent camera trap for conservationists and forest officials that extends computer vision and machine intelligence into the wild to non-invasively and accurately identify animals and alert officials on their whereabouts. AiCatcher can also identify people or suspicious activity during unauthorised times in forest reserves and notify officials for faster action to take counter measures.

A prototype of the Aicatcher was tested in Bannerghatta Biological Park India, and a tiger was spotted and a notification was received via text message. In the future, we can use AI enabled sensing to help us learn so much more about the wilderness without damaging its fragile ecosystem. 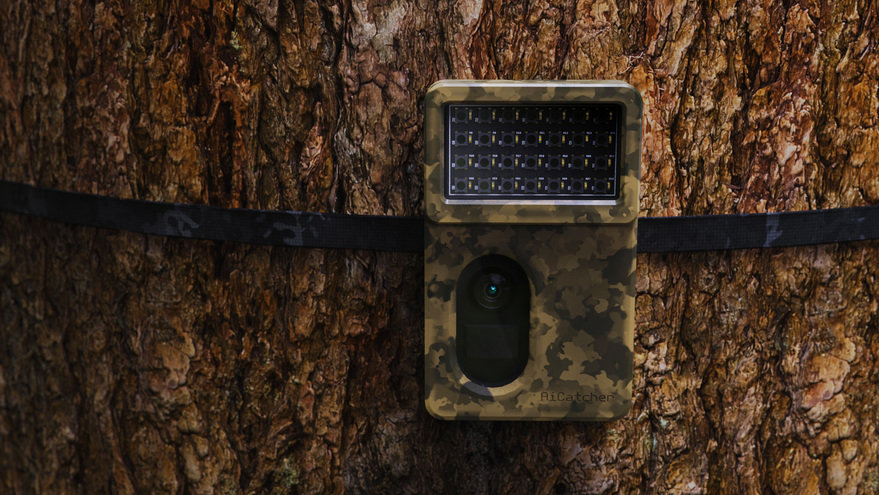 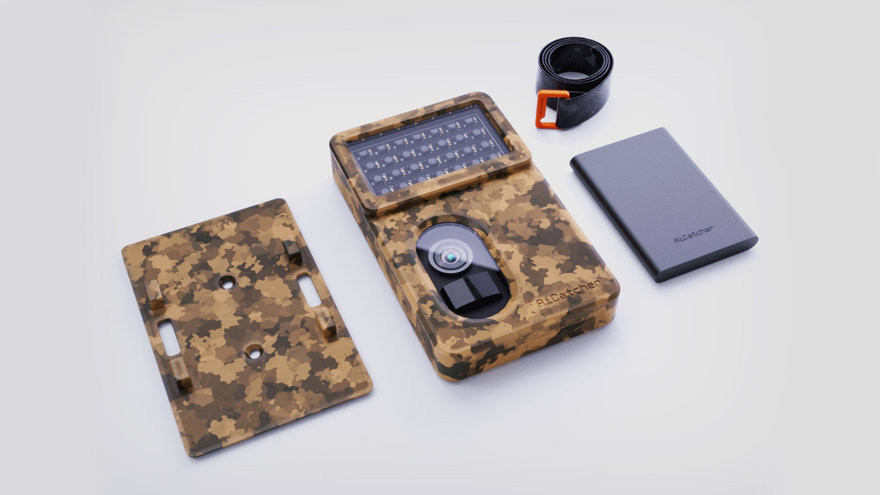 Easy to get started Comes with a mount plate, battery and strap 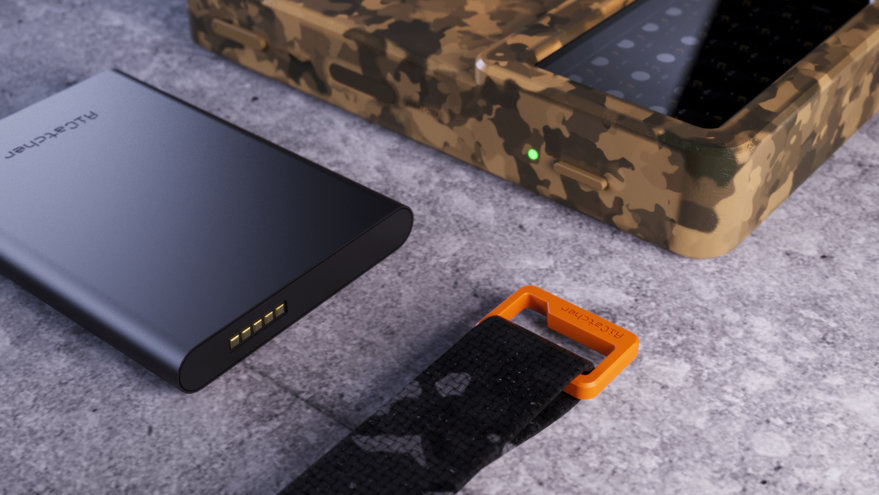 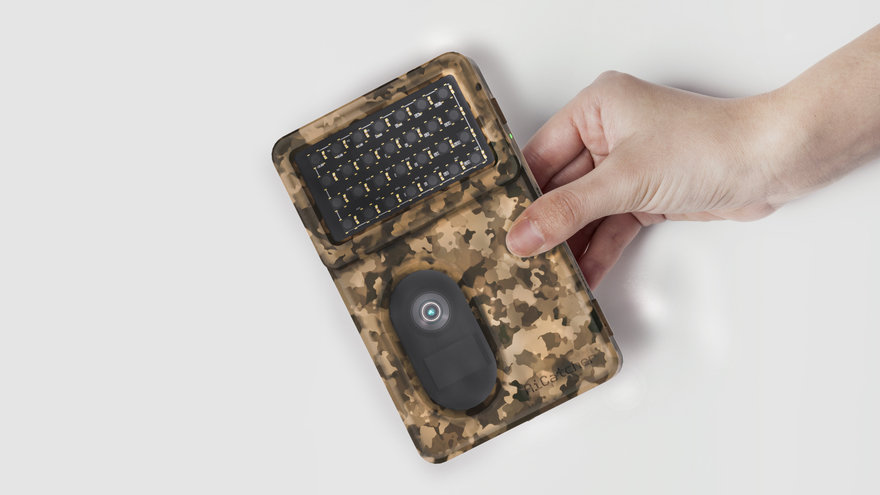 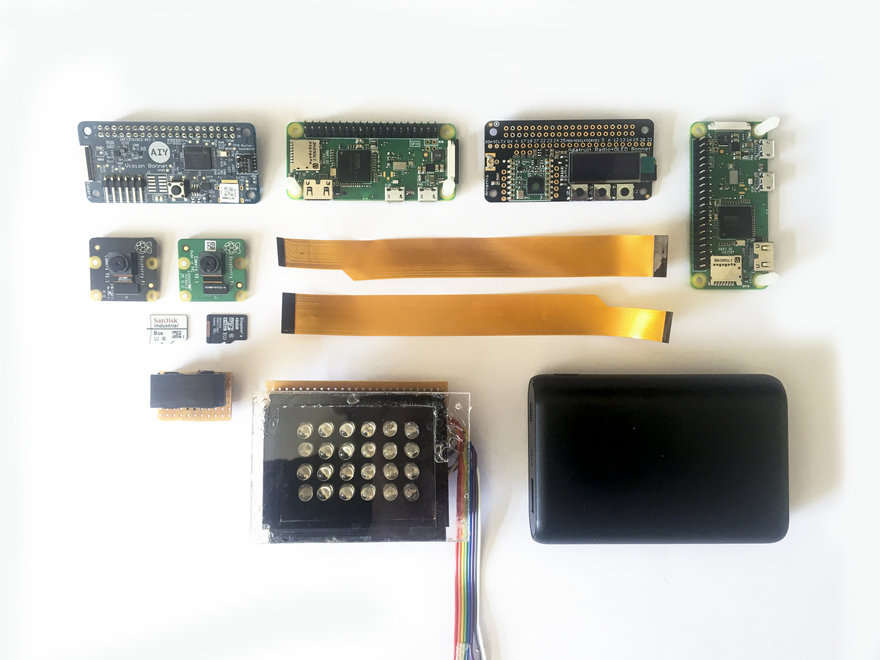 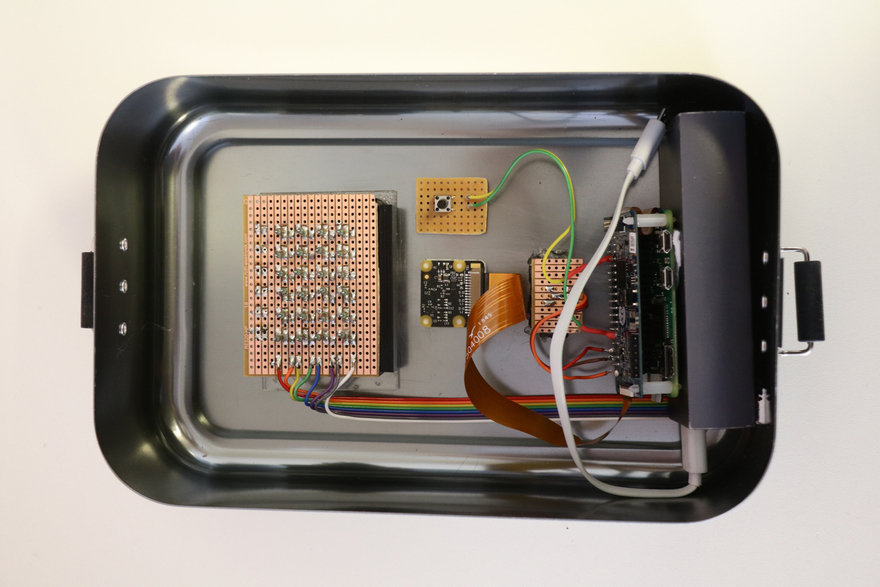 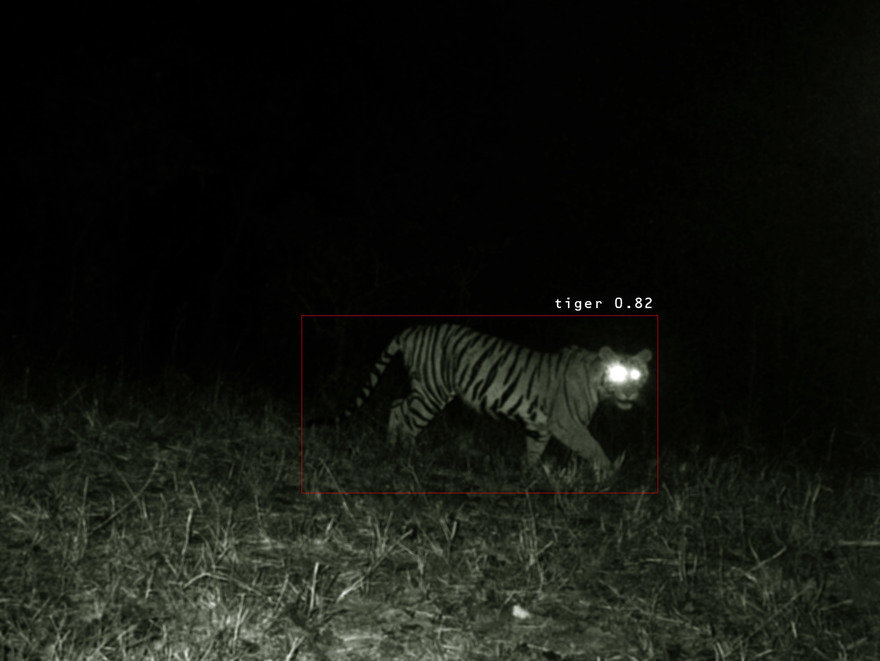 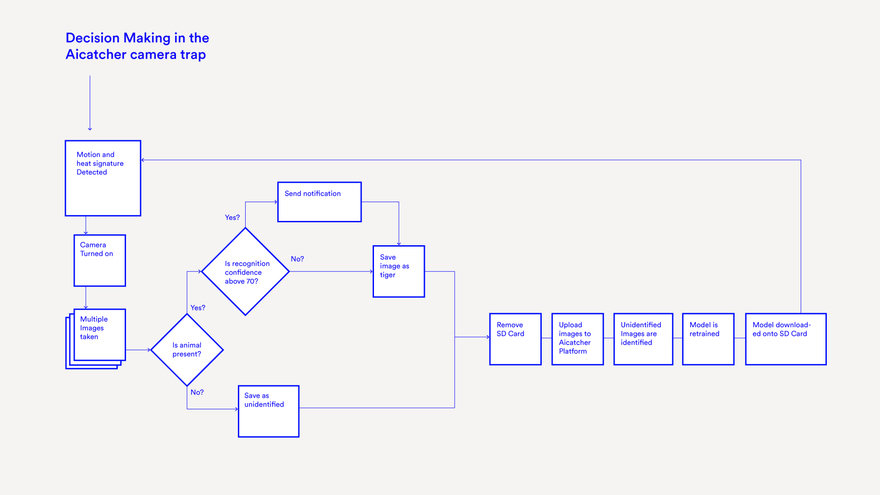 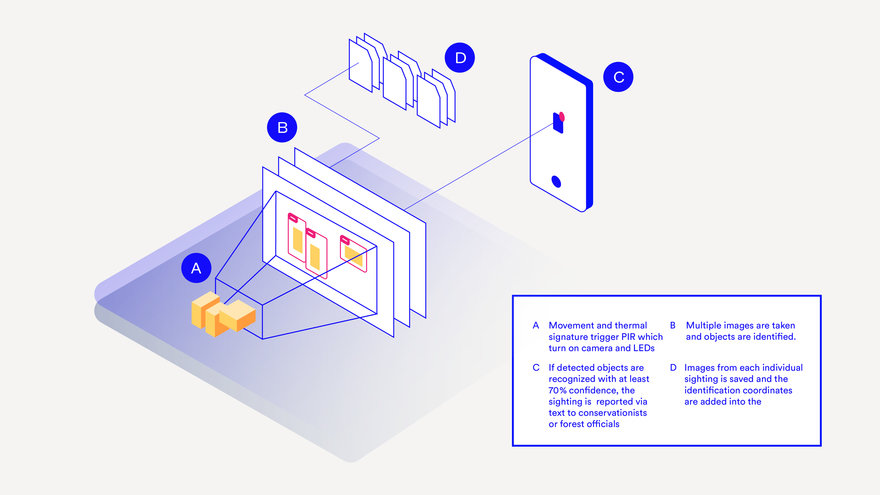 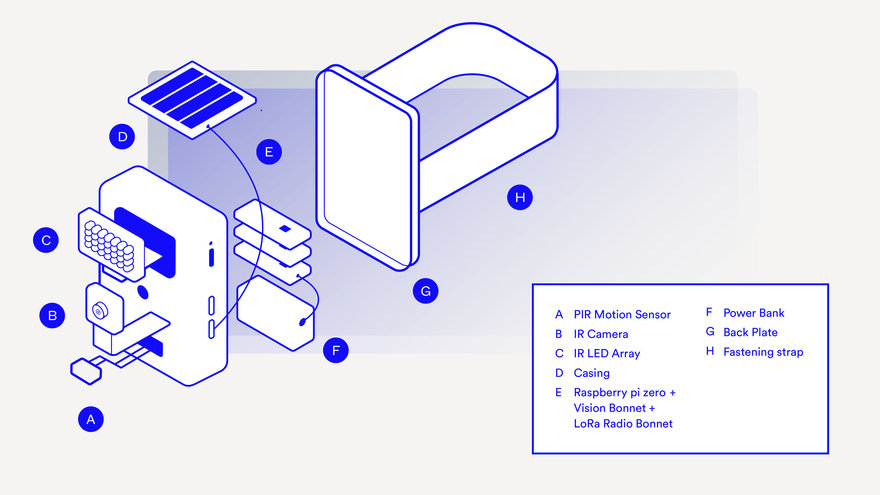 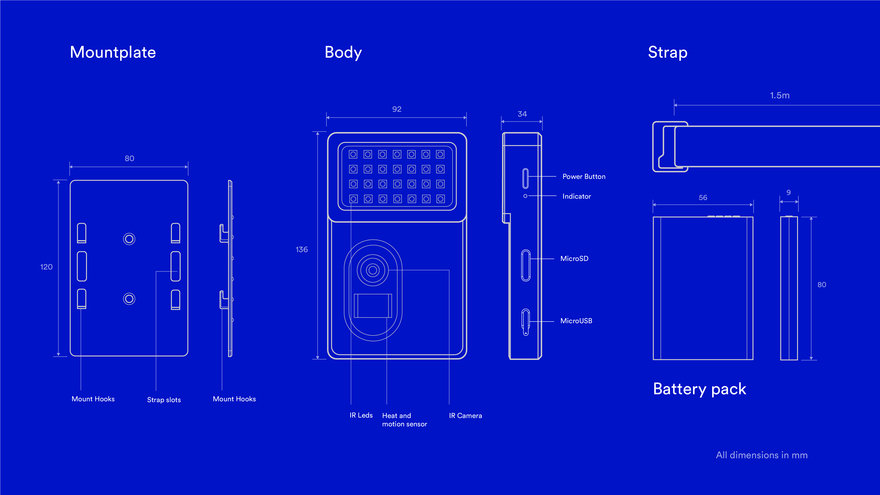 Poaching and Habitat loss Poaching is a $20bn industry. This trade has only gone up with demand increasing across the world, as our appetite for exotic animals increases. While conservation efforts are being made to influence policy and campaigning, it is most strained at the very bottom of the supply chain. Conservationists face major challenges mitigating the relationship between locals, often monetarily incentivised by poachers to track and trap animals; The poachers themselves are part of local mafia. Human activity like agriculture and mining has lead to habitat loss and animals have found themselves in villages, leading to fatal clashes with people. These conditions make the job of the local forest department personnel and conservationists very challenging. Monitoring large areas of forest land is a time consuming effort. Often there is no way of knowing when an animal might stray into a village and officials are called upon when it's too late.

What if we had eyes and intelligence in the jungle? AiCatcher camera traps are deployed in strategic forest areas close to human settlements, in known areas of animal territory or in frequently visited areas known to contain prey or water. If an animal triggers its thermal motion sensor, multiple images are captured and saved. Simultaneously the computer vision algorithm identifies the animal and sends a text notification to officials about the animal it has identified, how confident it is and which camera it is. Officials can then choose to use this information to alert locals, relocate animals and prevent injury or encounters. If an animal is not recognised with a high confidence score, its images are stored and are later used to expand its training database to increase the the accuracy of animals it can identify. Similarly it can identify people and notify authorities so they can respond preemptively and investigate whether there is poaching activity during unauthorised times on the reserve or if locals have strayed too far into the forest.

AiCatcher does not require an internet connection. All its processes run locally. AiCatcher uses LoRa (long range radio) signals to communicate and can be expanded to use cellular connectivity. On-Device machine learning uses very little power as well. Depending on geography, different models can be trained to identify a combination of animals. Currently it can identify tigers, leopards and elephants with more animals being added. The current prototype of Aicatcher lasts for 4 days with a lithium Ion battery, and can last longer with a solar cell. The model was trained with over 2000 images of tigers and leopards, and can identify tigers in camouflage quite accurately. It uses cheap hardware and costs around the same as any entry level hunting camera trap.

Better image data for research Camera traps have become critical tools in studying wildlife, and are deployed for weeks or months at a time to understand animals territory, habitat, population etc. Once deployed camera traps take thousands of photographs triggered by a motion sensor. These images contain a large fraction of false positives. The Computer Vision layer drastically reduces these false positives and improves the quality and accuracy of captured images and collected data on animal behaviour, habitat and population.

The AiCatcher was developed working with conservationists and researchers from the Imperial College department of Natural Sciences, the Tropical Forest Ecology department and conservationists from the Nature Conservation Fund, India. Their recommendations and experiences formed the basis of a system that strongly complements and supports the role of forest authorities who work hard to educate locals and become crucial influencers in the community.

While networked AI, analyse and help solve big problems from the top down, smaller Edge AI work from the bottom up. In wildlife conservation as well, Networked Ai is being used to analyse huge amounts of wildlife data to understand larger patterns, long term trends in behaviour and climate. It will be Edge AI deployed into forests that will connect the gaps and make the day-to-day jobs of the people in the forests and on the field easier.