Each year, thousands of Massachusetts children and teens enter the juvenile justice system. In 2018 alone, over 7,000 underage kids were arrested in the state of Massachusetts.

However, only a very small percentage of individuals are ever found guilty of committing an offense, indicating that the system subjects many youth to the harms of incarceration and court involvement who are legally presumed to be innocent.

A lot of this is due to the fact that each case is unique, involving many individuals and organizations, multiple phases, lots of important choices and several potential pathways.

Unsurprisingly, the system is largely misunderstood by those not immersed in it, which leads to several problems:

Juveniles and their guardians often feel powerless because they don't understand what they're supposed to be doing, who they can/should talk to, exactly where they are in the process and what their options are moving forward—especially the option to voluntarily participate in the Juvenile Alternative Resolution diversion program instead of facing arraignment—this program seeks to rehabilitate juvenile offenders and reduce their barriers to success, including entrenchment in the system.

Additionally, individuals and organizations that compose the system, such as police officers, the Massachusetts Department of Children and Families (the state's child protective agency), and the Clerk Magistrate or Bail Commissioner, understand their individual roles, but it's often unclear how those roles fit together, which hinders cross-communication.

The result is a disconnected, complicated system with many potential gaps, many potential opportunities, and no way to start identifying, addressing or taking advantage of them.

So, with the help of Boston Public Schools, the Department of Youth Services, and the Suffolk County District Attorney's Office, Agncy tackled this problem by creating a streamlined overview of the system—a Juvenile Justice Map meant to be a tool for decision-makers, policy-makers, family and other system stakeholders.

This map outlines pathways of juveniles entering the system, the phases within each pathway, and the role of key individuals during each phrase. By visualizing and streamlining this information, Agncy made it possible to understand how this complex system works. And, as a result, it opened the door for personal empowerment, cooperation across roles, elimination of redundancies, growing the JAR program and, ultimately, improving the Juvenile Justice system over the long term. 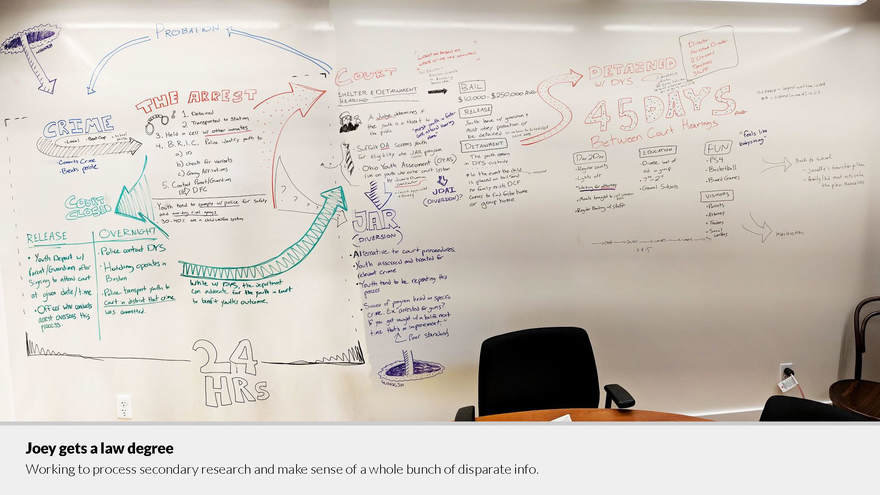 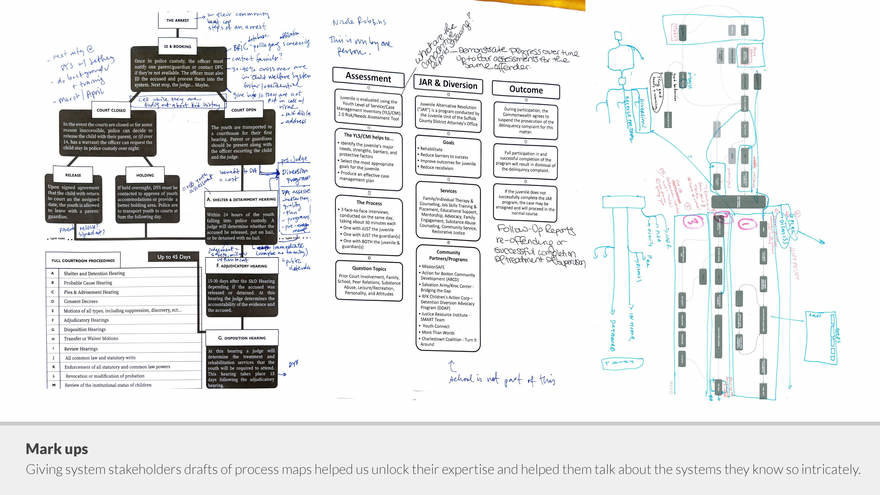 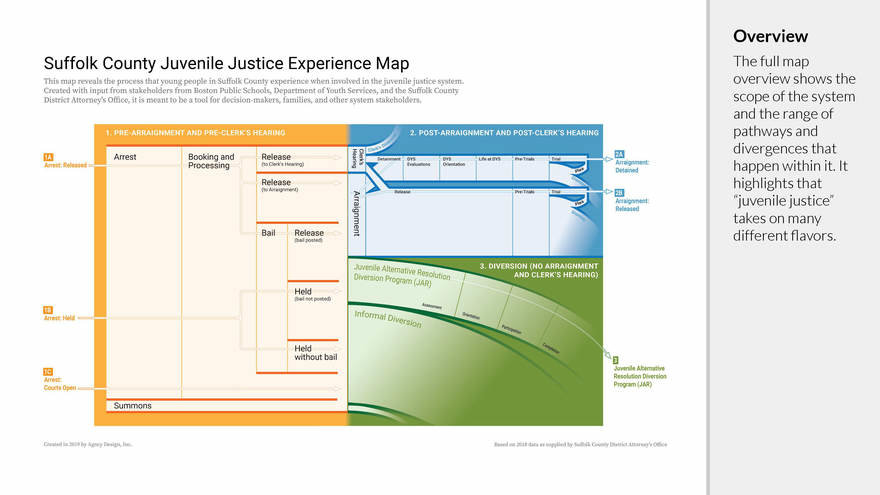 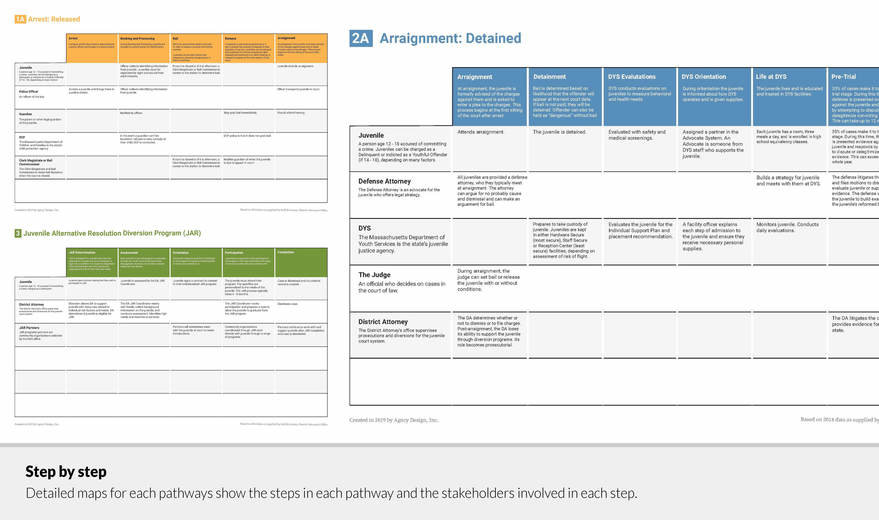 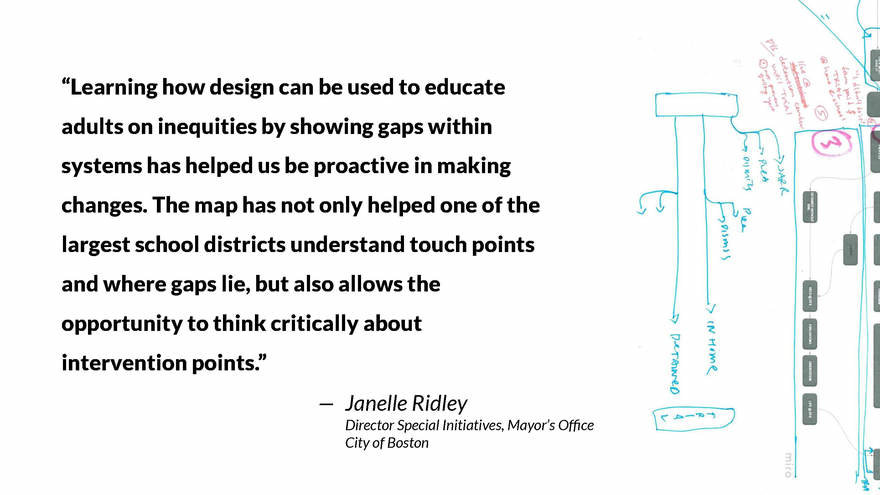 Interest in improving the Massachusetts juvenile justice system is gaining momentum. A massive criminal justice reform bill was signed just last year, and there's a push to explore new ways to support young people in need rather than entrenching them in the system.

However, the system's complexity and lack of clarity is a huge barrier. It impacts policy-makers seeking to improve the system, stakeholders looking for more equitable, coherent decision-making, and young people and their families who are just trying to navigate it all.

Agncy took on this challenge by creating a map of the system with the goal of empowering stakeholders to operate more clearly and understand their impact in the context of the system as a whole.

The process of creating this map is an example of how hard it is to make something look easy. Agncy went through a rigorous series of interviews and many, many versions of the Juvenile Justice Experience Map before landing on a final design. The process involved learning legal lingo so we could de-jargon it and exploring the twists and turns of individual cases so we could synthesize them into common pathways. The end result makes a lot of sense, but making sense of all the information was a massive undertaking.

Agncy's primary research included stakeholder interviews with folks from a range of perspectives, including:

We found early on that it was hard for people to describe their process and the scenarios young people go through—maybe because they are so close to the nitty-gritty details every day that they've internalized them and have a hard time seeing the bigger picture.

We took a step back and conducted a bunch of secondary learning, using online research, law journals, and coverage of the criminal reform work in the state.

Writing about new programs was particularly useful in helping reveal bright spots in the system. For example, the Juvenile Alternative Resolution (JAR), a recently launched diversion program, moves young people out of the courts and into community-based support programs. Housed in the DA's office, JAR works with community organizations to assist with an array of services, including: individual and family therapy counseling, job skills training and job placement, educational support, mentorship, life skills training, and more.

Using our all our research, Agncy created early drafts of a system map. These drafts had errors and gaps in information, but by interviewing system stakeholders and putting these maps in front of them, we unlocked more information. They corrected our misunderstandings, reordered steps, brought up new elements or regulations, and other details. Giving them something to react to enabled these system experts to share their expertise.

Through Agncy's research, we came to understand a few realities about the system.

The system is fragile

Sometimes, from the outside looking in, a "system" can feel monolithic, impenetrable, even conspiratorial. But, as we dug in, we found that this system is comprised of the decisions and behaviors of many individuals—and each of their choices can have a huge impact on the paths along which young people are propelled. From the arresting officer who chooses to arrest rather than give a stern warning, to the bail commissioner who makes decisions that result in a young person's detention—this is not a uniform system acting on a singular directive, but rather individual people acting on their specific protocols.

The map makes clear the potential impact that timing can have on a young person's progress. While the justice system acts swiftly early in the process—moving quickly to arraignment in a matter of days and hours—the cadence slows to a scale of months as it progresses. This highlights the types of critical decisions and communications that must be made in short order for a young person. And it reinforces just how impactful court involvement can be for a teen, often disrupting over a year of their life.

In some ways, the final experience map artificially declares a start and an end point to a young person's experience. In truth, their interactions with law enforcement fall off the map. While recognizing the potential impact of understanding the "befores" and "afters," we had to work to put some boundaries in place for ourselves to scope our experience map in the most useful way.

Informed by primary and secondary research, Agncy organized its learnings into a process flow, identifying phases from arrest through release and the actions of key individuals during each phase of the process.

Once we were positive all our information was tight and right, we worked to figure out the clearest way to communicate that information. A lot of different visual approaches were considered and explored but, in the end, using color, directional linework and thoughtful labeling, we distilled the Juvenile Justice experience pathways down to their most critical components and fit them onto a single page.

The map has been used by system stakeholders and those affected by the workings of it. The District Attorney's office, for example, uses the map as a training tool for new attorneys and staff; Boston Public Schools has used the map to understand what students are experiencing and to consider how best to support them.

Our next steps will unfold this summer, as we work with a cohort of young people participating in JAR to illuminate teen's experience of this system and process.

"Working with AGNCY and learning how design can be used to educate adults on inequities by showing gaps within systems has proved to not only be beneficial to the City of Boston, but to help us be proactive in making changes. The map has not only helped one of the largest school districts understand touch points and where gaps lie, but also allows the opportunity to think critically about intervention points.

My next steps with the map are to work with colleges/university departments that educate students who enter related fields to make clear the historical and generational achievement gap within this country and how the cradle-to-prison pipeline continues to persist in time of vast changes."