We live in a world where more than a quarter of the world's population is visually impaired and yet the spaces we design do not consider this part of the population's need for ease of navigation and equal right to access spaces. In a developing nation like India, where city planning for differently abled individuals is not the forefront for architects, it is necessary to create a solution that enables the visually impaired to navigate around the city. In our solution, we propose to use magnetism to tackle this problem. Magnetic tiles that can be placed seamlessly within spaces (both indoors and outdoors such as malls, schools, footpaths etc.;) have been designed to create a path that the visually impaired can follow and use to navigate. We have also proposed a zebra crossing that turns magnetic when it is safe to cross the road so that the visually impaired could navigate on the roads without having to seek assistance from strangers. With our solution, we hope to change the way spaces are designed to include the needs of different types of people that access the spaces and provide the visually impaired a right to experience spaces like everybody else. 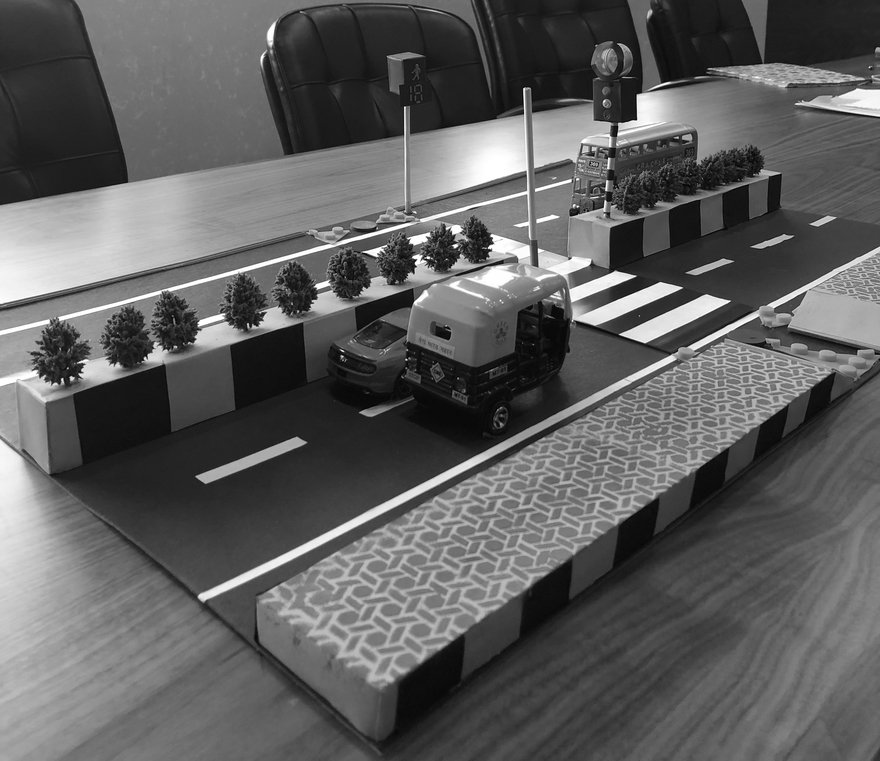 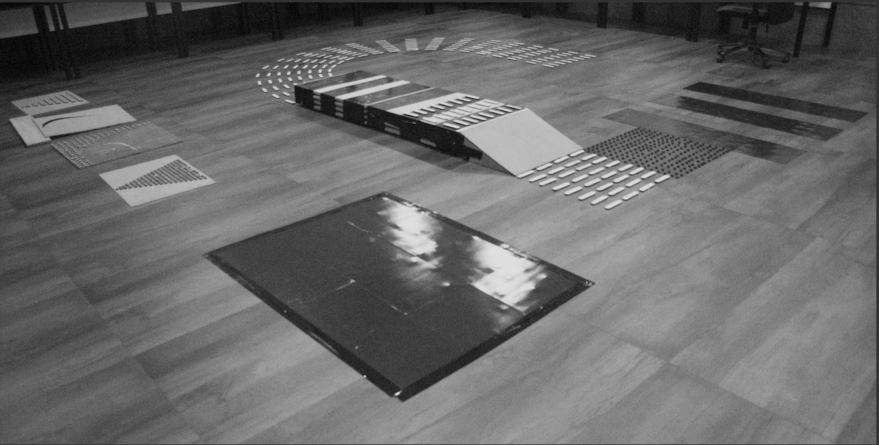 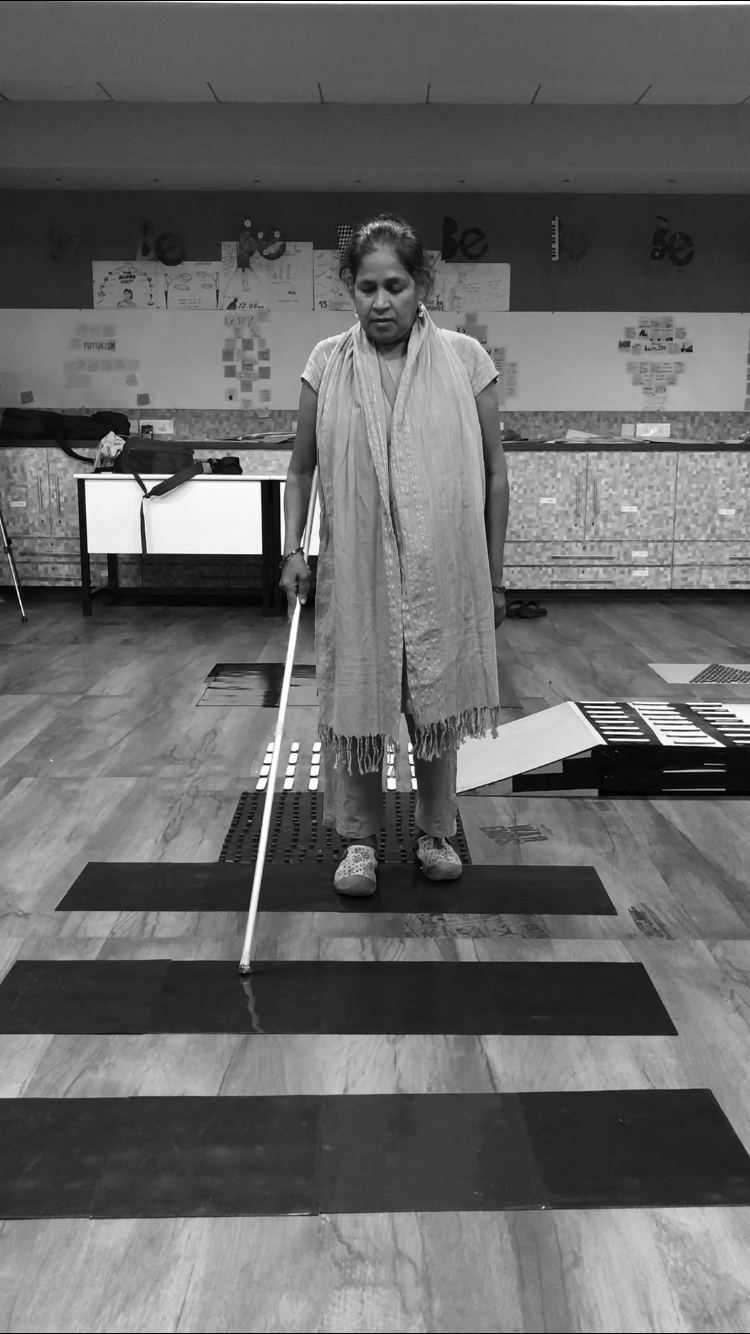 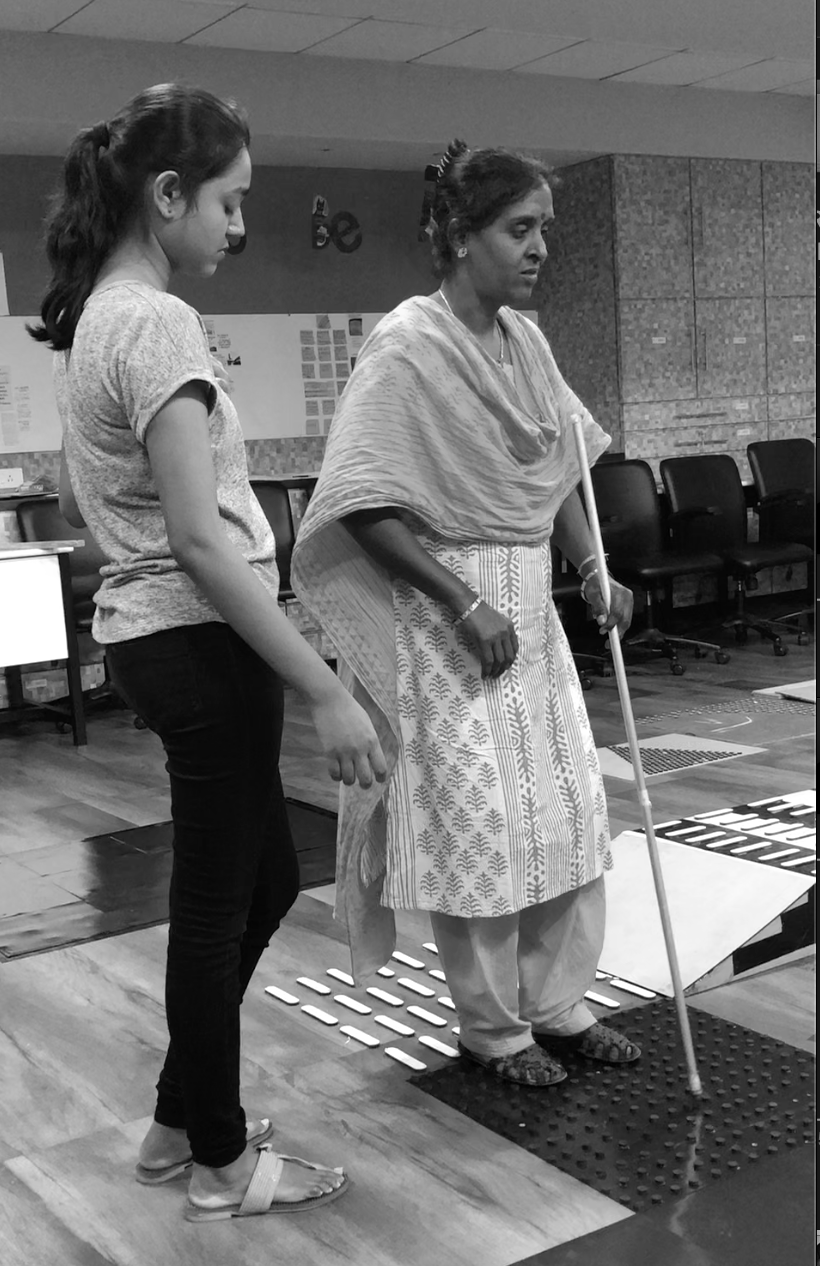 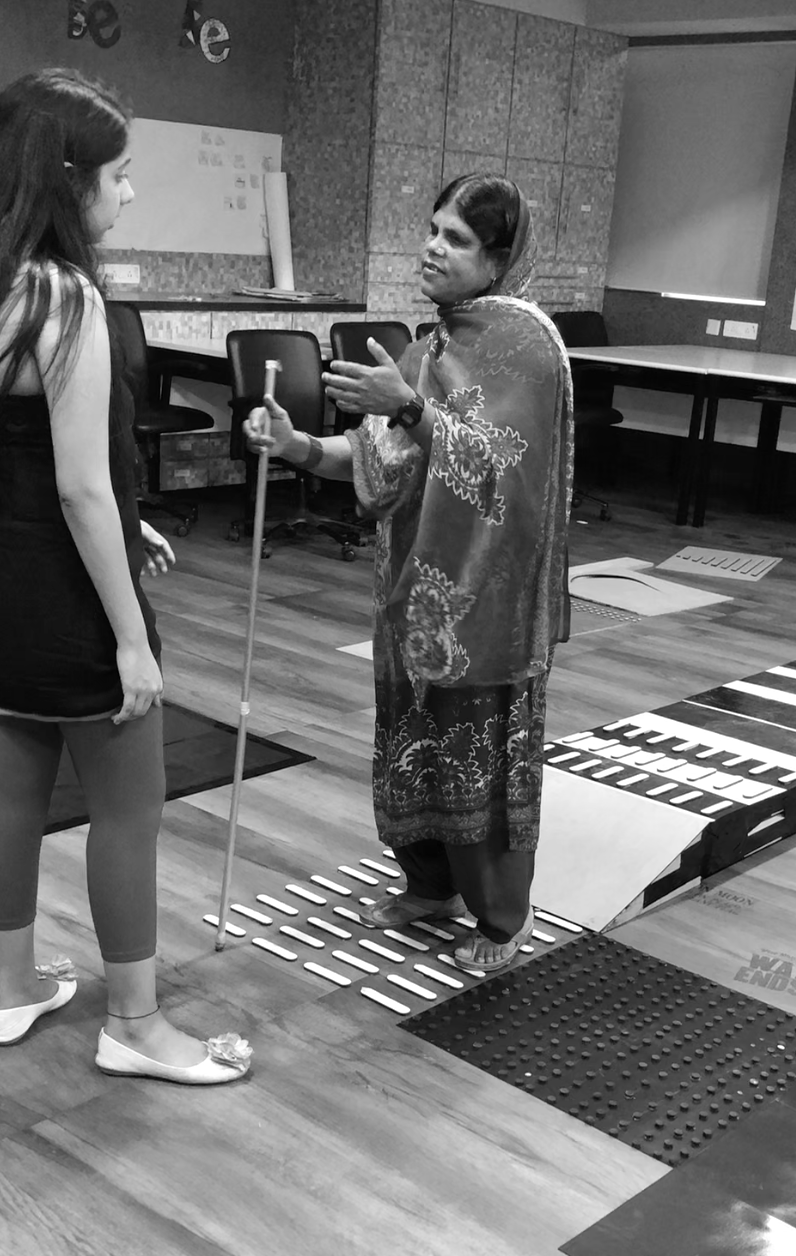 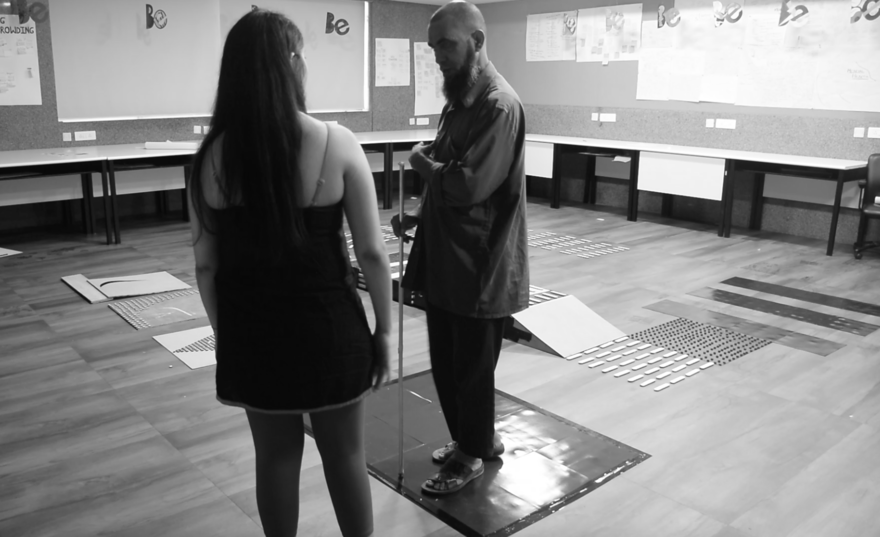 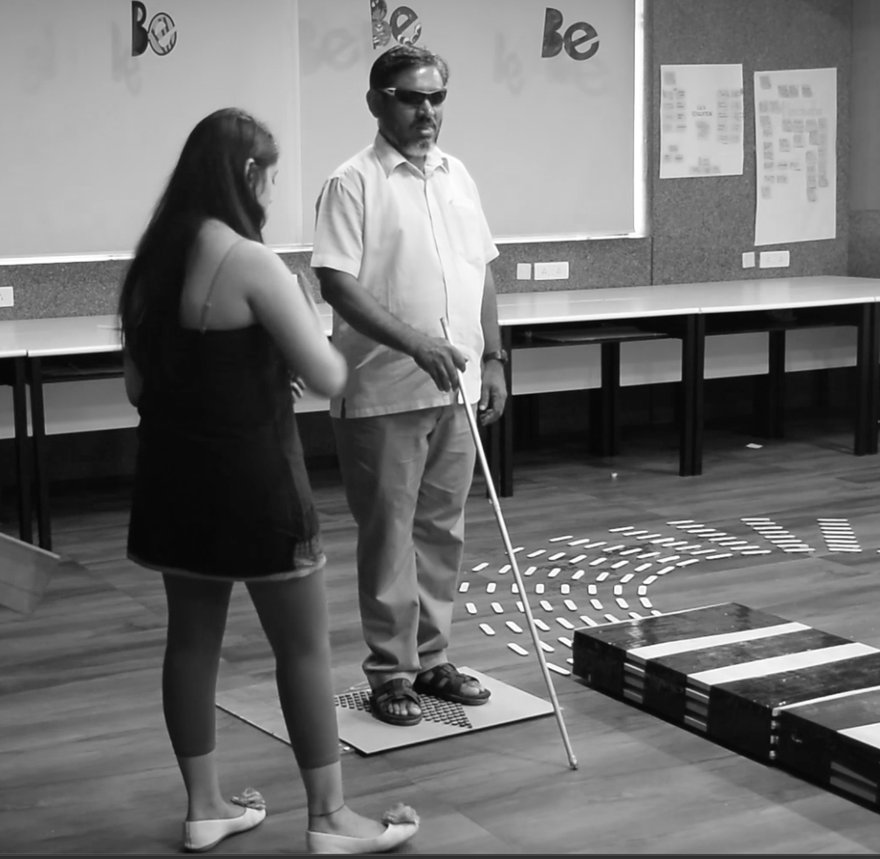 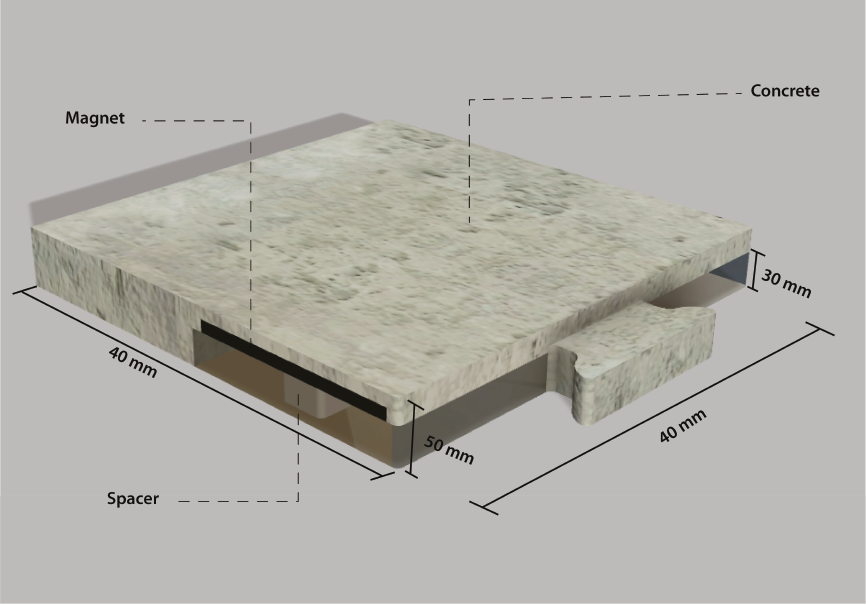 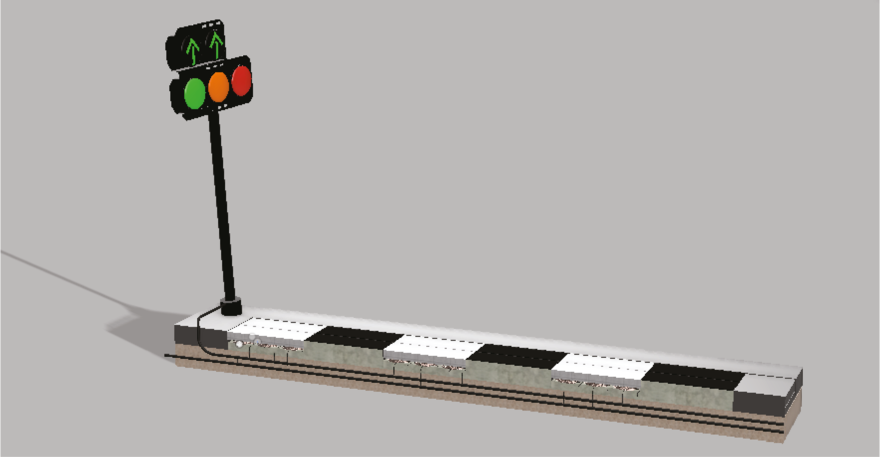 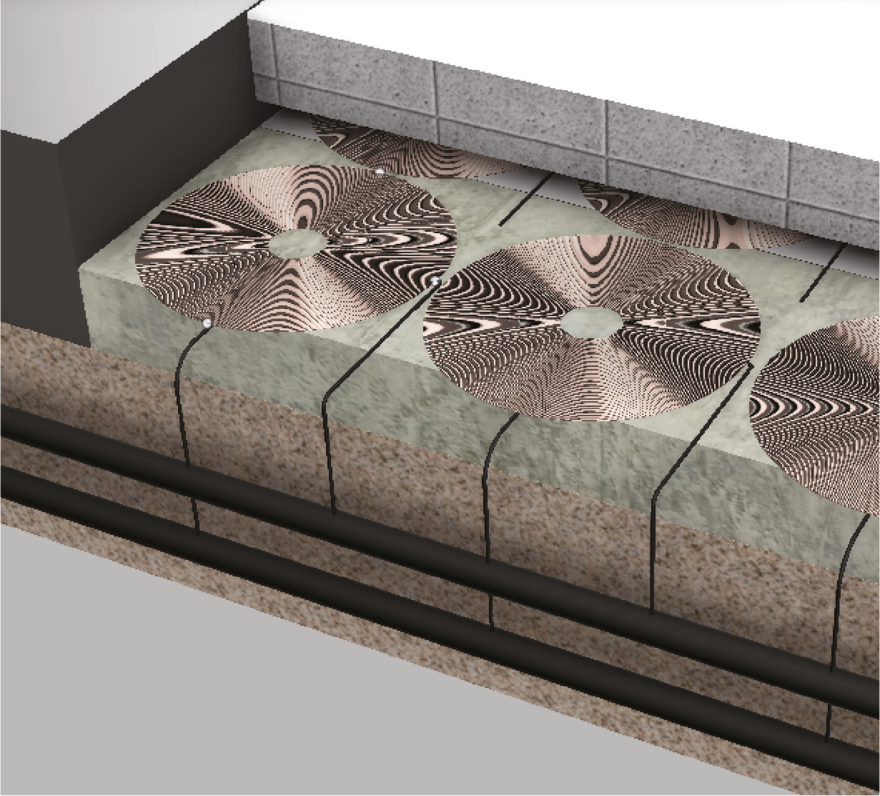 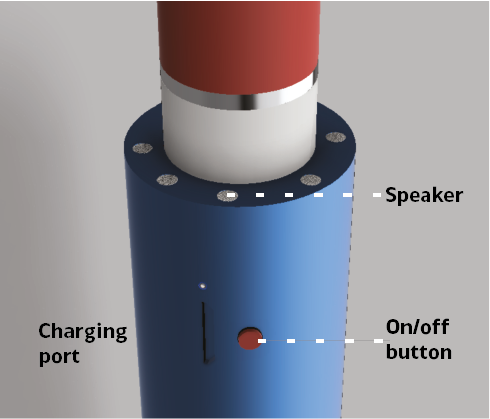 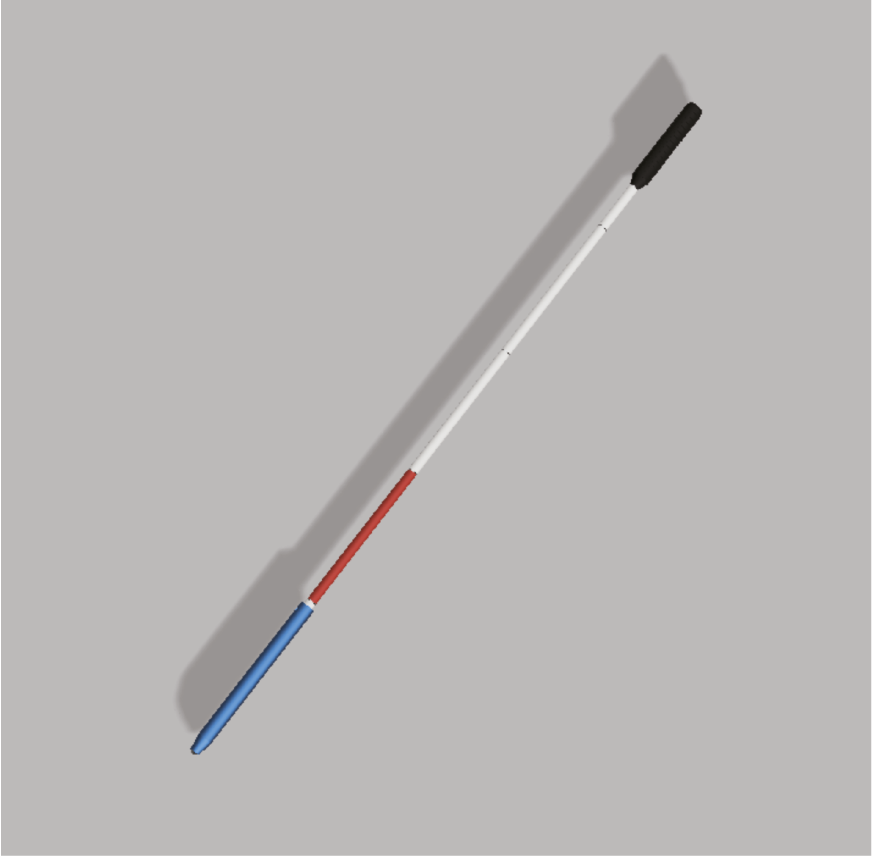 During our research phase, we shadowed the visually impaired for a few days to observe the behavioural patterns they had formed as they travelled from one point to another. After shadowing, we interviewed the visually impaired to validate the behavioural habits they had formed and to also understand the reasoning behind this habit cultivation, along with understanding other challenges they faced during transit. The few behavioural habits observed during research were:

- To make sure they are on the side of the road, they rub their shoulders against parked cars.

- They usually have to wait for a long period of time for assistance.

- They touch the texture on the wall and drag their stick on the floor in order to orient themselves.

Habit loops were created to understand the reasoning behind these behavioural habits formed and the problem statement that we arrived at after concluding our research phase was:

The visually impaired have formed habits to overcome challenges they face while in transit. They cannot rely on these habits completely, causing them to depend on assistance from others, making them less responsible for their own safety.

The final concept to solve the problem statement was to turn a zebra crossing magnetic when it is safe for the visually impaired to cross the road. The walking stick would have a metallic end to help feel the magnetic force. Directional tiles will be placed on the footpath to indicate the direction and position of the zebra crossing and a circular electromagnetic tile will be placed on the footpath where they could wait for their turn to cross the road. The tile itself turns magnetic along with the zebra crossing so that they do not have to extend their stick on the busy road to check whether it is safe to cross. This would also ensure that they walk at the centre of the zebra crossing in order to avoid any accidents with the cars lined behind it. A small scale model was created to understand the ecosystem and functioning of the concept.

A true scale model of the concept proposed was created in order to user-test the solution. The model included different types of directional tiles, a circular magnetic tile (the waiting area before the zebra crossing), two different types of magnetic zebra crossing and different frequencies of sound for the countdown timer of the zebra crossing. The environment of a busy street was created using sound. The participants were briefed before the user testing and were provided with walking stick with a metallic end.

- Participants were directed towards the waiting area before the zebra crossing, a tile that was magnetic and had small circular textural bumps on them in order to test whether the tile indicated to the users to wait at that point until it is safe to cross the zebra crossing.

- The participants were then asked to cross the road, using the zebra crossing, while increasing the frequency of beeps of the countdown timer. This was to test if sound had a correlation with the sense of time. Any visible changes in speed of walking during this part of the test was noted down.

The feedback received from the participants were:

- Magnetism evokes a feeling similar to that of being guided by somebody, due to the slight tug on the walking stick.

- The users got numb to the force felt due to the magnetism while interacting with a long continuous magnetic tile.

- The users preferred the zebra crossing consisting of stripes with distances between them, because it matched their mental model and they were able to immediately recognise it.

- Most users said that such tiles could also be used indoors, in spaces like malls, since they were easily able to follow a magnetic path.

- Increasing the number of beeps, with reducing time, made users walk faster.

This helped formulate the final idea to create magnetic tiles and ferro magnetic cement for the zebra crossing.

An exploration phase was conducted where:

- Various tiles having different heights were tested over a magnet to define the depth at which the magnet should be embedded in the cement tiles to produce the optimum amount of magnetic force on the surface that could be detected by the visually impaired.

- Various magnets of different grades and surface field strengths were tested to find the magnet having the optimum amount of force needed on the surface of the tile to give the users a seamless experience while gliding their stick over the tile.

- Different ratios of cement and iron filings were mixed and tested to create ferromagnetic cement that could be used in the zebra crossing. A copper coil was placed under the tiles and electricity was passed through the coil to test the amount of magnetism created on the surface of these tiles.

The final system elements designed after various stages of testing are:

Spaces like malls lack any form of assistance for the visually impaired currently. These tiles are so seamless and designed in a way that they can be incorporated without affecting the architecture of such places. These tiles contain a magnet of half its width. When placed together, these tiles create a non-continuous magnetic path so that the users do not get numb to the force. The magnet is placed 2mm below the surface of the ceramic tile in order to create a surface field strength of 4174 Gauss, and the magnet used is a Y30 ferrite block magnet. The design considers ease of manufacturing; it contains a spacer, elevating the magnet when being cast. The grooves on the tile help in placing the tiles correctly to form a non continuous magnetic stretch and also act as an interlocking mechanism.

These paver tiles are robust enough to be placed outdoors and contain a magnet of half its width. When placed together, these tiles create a non continuous magnetic path so that the users do not get numb to the force over time. The magnet is placed 10mm below concrete in order to create the optimum amount of surface field strength of 3072 gauss, and the magnet used is a Y30 ferrite block. The design considers ease of manufacturing; it contains a spacer that elevates the magnet while it is being cast. The grooves on the tile help in placing the tiles correctly and they also act as an interlocking mechanism at the same time.

It is an attachment for the walking stick with a rolling iron ball at the bottom, so that the stick could glide easily over the magnetic tiles. The stick also consists of a hall sensor connected to the speaker placed at the top of the attachment, and detects the changes in the magnetic field strength of the zebra crossing and alerts the user by altering the number of beeps as an indication.

M-Crossing is an electromagnetic zebra crossing that turns magnetic when it is safe for the person to cross the road and non magnetic when it is not. For this purpose we propose to embed copper windings connected to a power supply, in cement that contains iron fillings. When electricity passes through these coils, the cement being ferromagnetic makes the zebra crossing magnetic. The coils change their magnetic field strength over time. The hall sensor in the sticks of the users detects this change, increasing the number of beeps, to indicate the time left to cross the road.

We live in a world where more than a quarter of the world's population is visually impaired and yet the spaces we design do not consider this part of the population's need for ease of navigation and equal right to access spaces.With our solution, we hope to change the way spaces are designed to include the needs of different types of people that access the space and provide the visually impaired a right to experience spaces like everybody else. We hope this would create independence and a sense of empowerment as the visually impaired could now navigate freely without seeking assistance from somebody else and ensure their safety in public spaces.