45 farmers commit suicide every day in India & they have no immediate treatment in Indian Villages.

SURVIVE is first if it's kind to completely automate gastric lavage process to drastically reduce the time & efforts of the treatment where every second is very crucial to save the patient's life.

This device could be used in ambulances, City hospitals & especially in a village use case scenario for emergency suicidal cases which can be used by rural health workers for immediate rescue.

When compared to a traditional gastric lavage process which takes up to 30-45 mins but SURVIVE could finish the same in 2-5 mins, relative upon the seriousness of the patient.

It has a complete system of products Designed including the Neck Attachment, Nose Attachment, and Pipe Inserter which together makes pipe insertion easier & treatment in villages possible by rural Health Workers in Emergency to save lives every day. 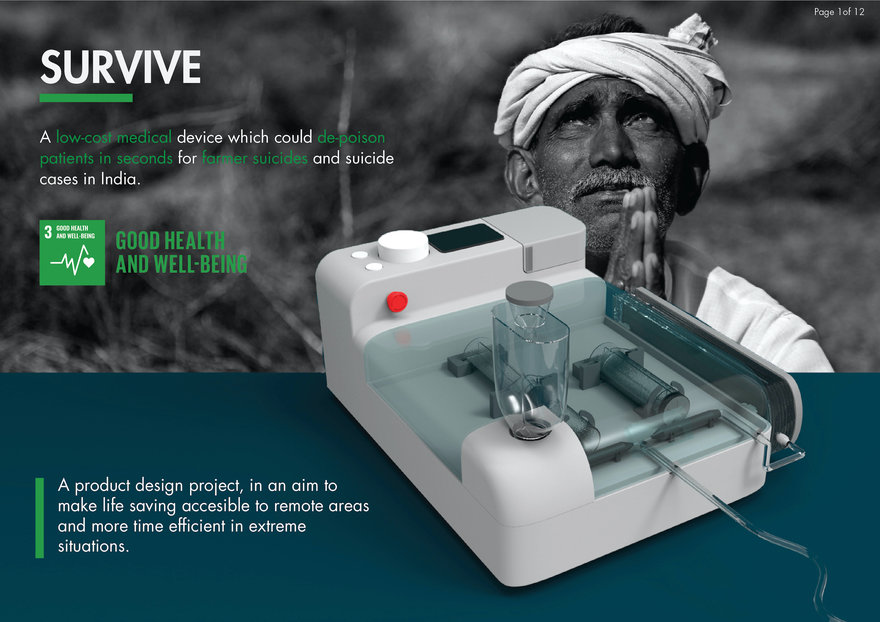 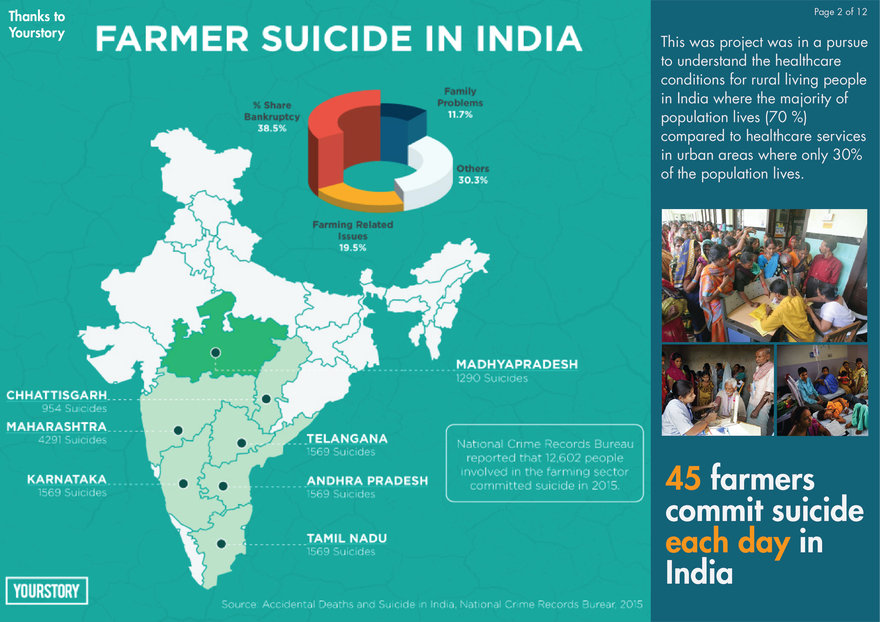 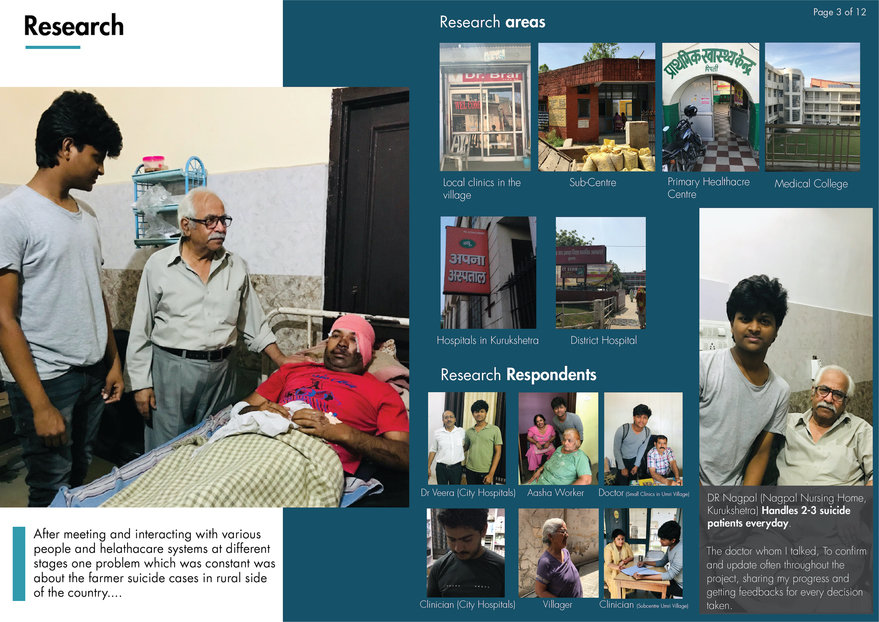 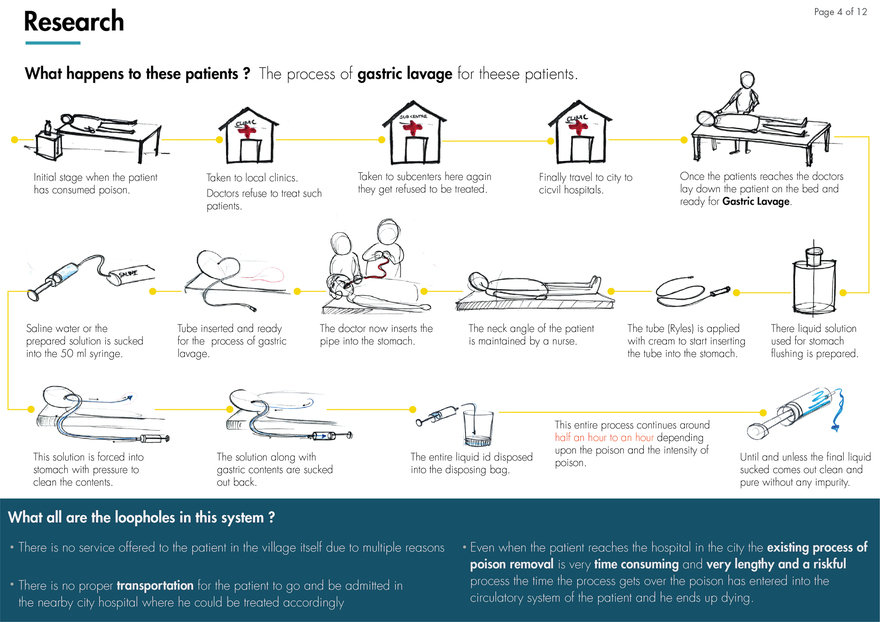 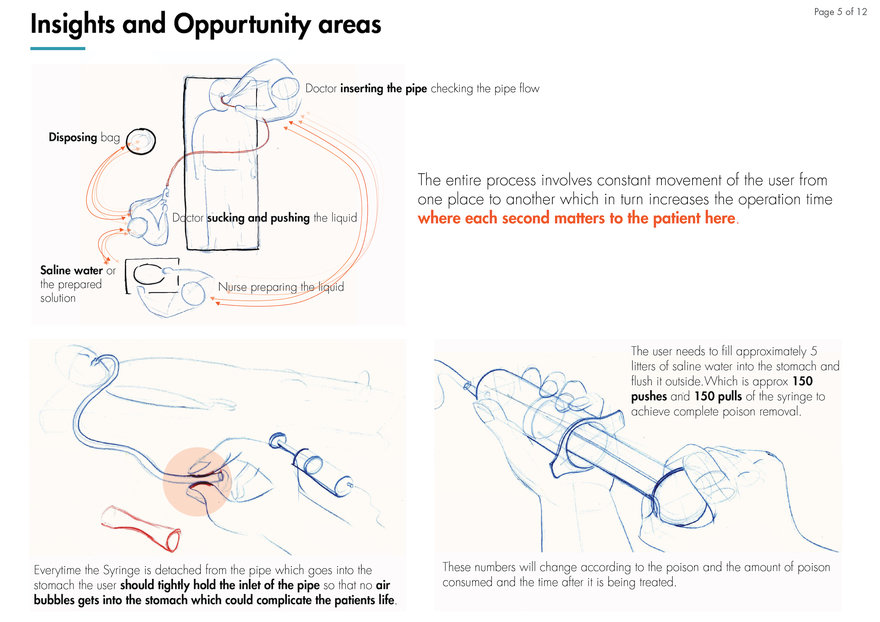 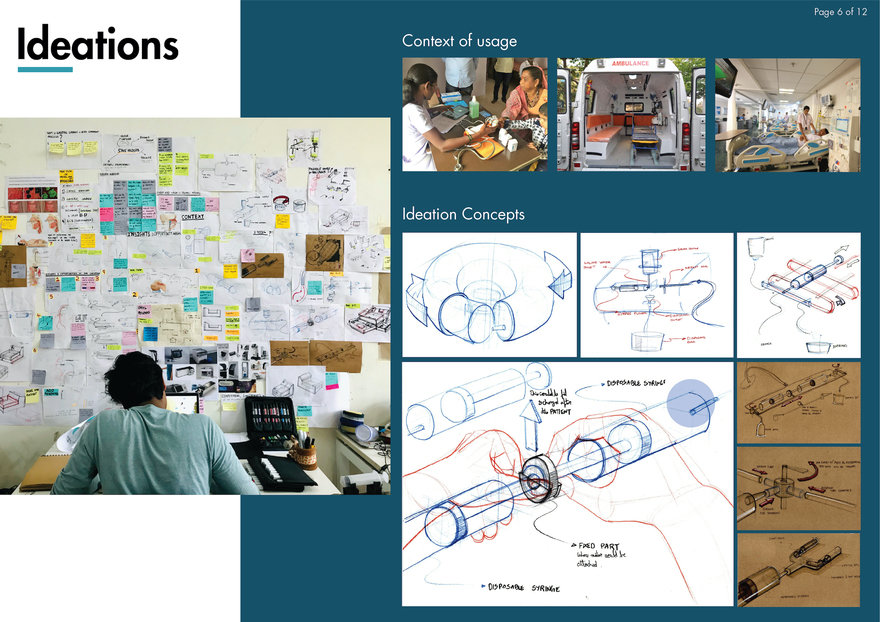 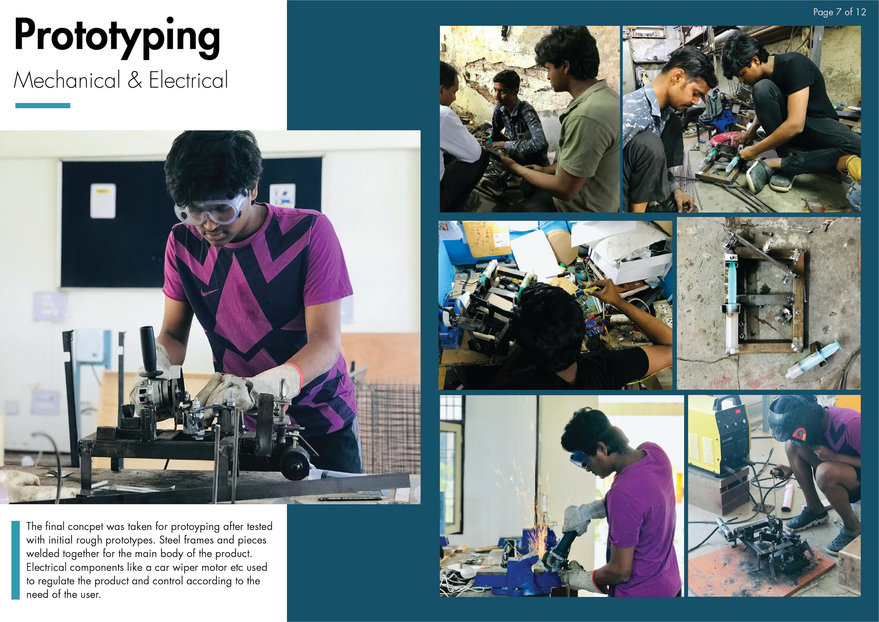 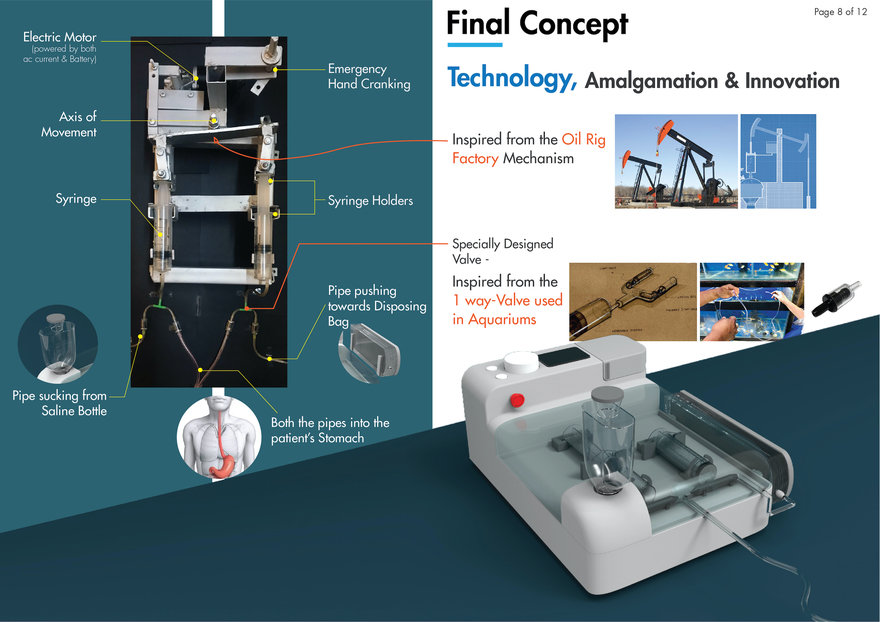 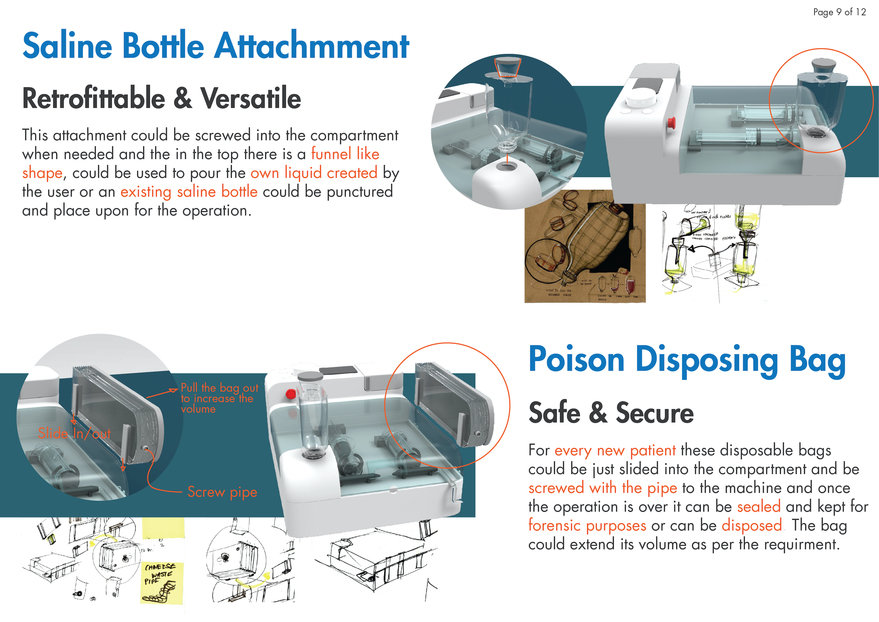 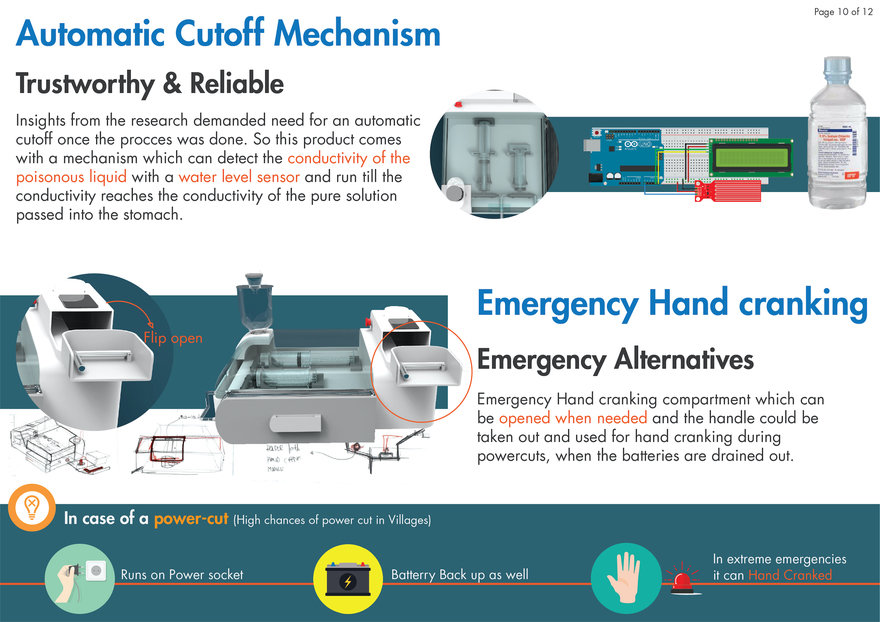 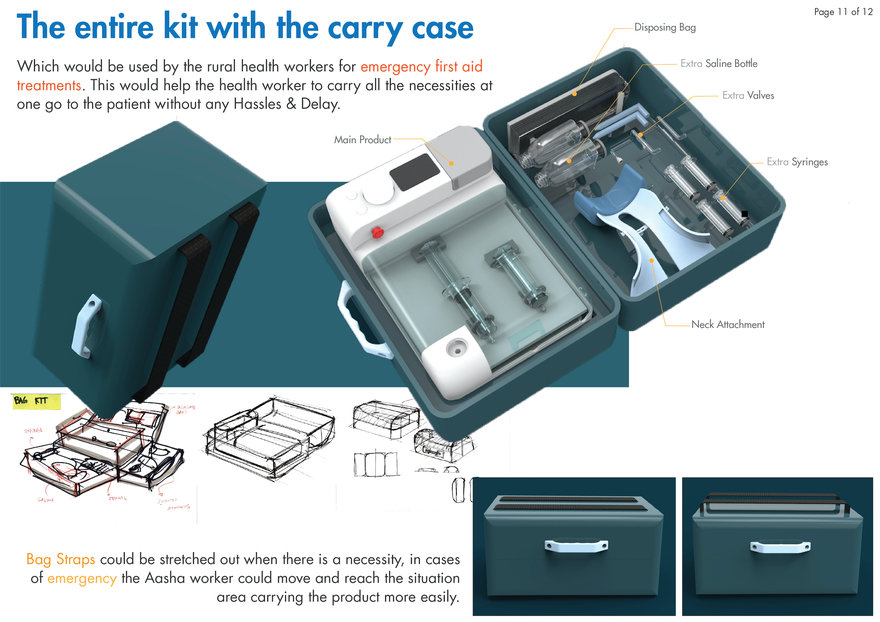 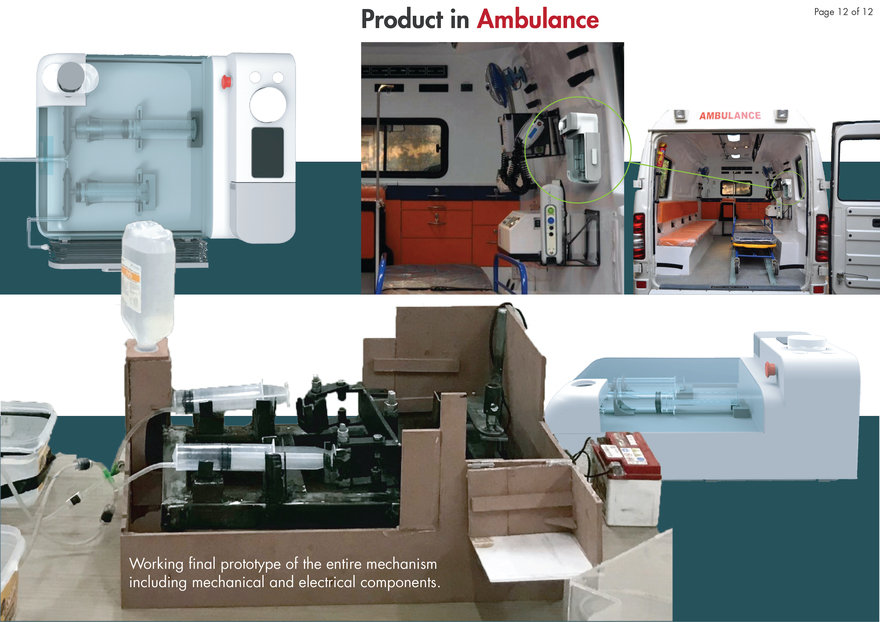 Survive is a low-cost medical device that could de-poison patients in seconds for farmer suicides and suicide cases in India.

A product design project, in an aim to make life-saving accessible to remote areas and more time efficient in extreme situations.

This project was in a pursue to understand the healthcare conditions for rural living people in India where the majority of population lives (70 %) compared to healthcare services in urban areas where only 30% of the population lives.

Rural health care in India faces a crisis unmatched by any other sector of the economy. To mention just one dramatic fact, rural medical practitioners, who provide 80% of outpatient care, have no formal qualifications for it.

The next step was for an Intense Primary research which included meeting and interacting with various people and healthcare systems at different stages one problem which was constant was about the farmer's suicide cases in the rural side of the country. Such a problem has never been worked on before and there are no solutions yet.

DR Nagpal (Nagpal Nursing Home, Kurukshetra) who Handles 2-3 suicide patients every day was the doctor whom I talked, To confirm and update often throughout the project, sharing my progress and getting feedbacks for every decision taken...

What all are the loopholes in this system?

- There is no service offered to the patient in the village itself due to multiple reasons.

- There is no proper transportation for the patient to go and be admitted to the nearby city hospital where he could be treated accordingly.

- Even when the patient reaches the hospital in the city the existing process of poison removal is very time consuming and very lengthy and a riskful process the time the process gets over the poison has entered into the circulatory system of the patient and he ends up dying.

Problems while performing the treatment in existing method-

- The user needs to fill approximately 5 liters of saline water into the stomach and flush it outside. Which is approx 150 pushes and 150 pulls of the syringe to achieve complete poison removal. Which gets very tiring and highly time-consuming.

- Every time the Syringe is detached from the pipe which goes into the stomach, the user should tightly hold the inlet of the pipe so that no air bubbles get into the stomach which could complicate the patient's life.

-The entire process involves constant movement of the user from one place to another which in turn increases the operation time where each second matters to the patient here.

Why Gastric Lavage is an important process?

- The best possible method even when the patient consumes the most dangerous poison as it completely cleans out the stomach clean.

- When the poison is dangerous and cases were the Antidotes(medicines) don't work on the patient this method helps in getting life back to the patient.

Where else is this process of gastric lavage and poison treatment is prevalent?

So What could be the Solution?

Started with these complex mechanism but all these concepts needed to change the entire system of existing-working but according to the insights if I could design something which could use the existing syringes would be better.

If there are 2 pipes wherein one continuously there is a supply of saline water into the stomach and on the other simultaneously the same amount of poison along with the flushed saline water getting out of the stomach and getting disposed which is similar to the transportation system of the living plants all around us and to Blood transfusion and Dialysis.

A new technology inspired from the way the Oil Rig Factorie's oil pulling out mechanism works and the way the Steam Engine in the past used to work.

Converting the circular movement from the motor into 2 syringe suck and push movement which could, in turn, automate the entire process constantly.

Once the main mechanism was finalized the next was to design a valve. This specially designed valve which has two 1-way valves helps in alternating the path for sucking and pushing.

The mechanism looks complex & the user using this device will be under intense cognitive load so the form of the product should be very simple and make the user feel "ya chill things will get fine".

The final concept was taken for prototyping after tested with initial rough prototypes. Steel frames and pieces welded together for the main body of the product.

Electrical components like a car wiper motor etc used to regulate the product and control according to the need of the user.

- First of its kind to cater such a problem which is very crucial for Indian Villages.

- A normal process of Gastric lavage takes around 40-45 min but with this product, the entire process is done in 2-3 minutes.

- A complete system of products that makes treatment in the village possible as well as in Multiple contexts like Ambulances & Hospitals.

- The product comes with an automatic cutoff mechanism and speed control for the right patient.

- It has a complete system of products Designed including the Neck Attachment, Nose Attachment, and Pipe Inserter which together makes pipe insertion easier & treatment in villages possible by rural Health Workers in Emergency to save lives every day.

Please go through the PDF for complete project details and Infos!