Cheer Project: From Earth, To Earth

The northern region of India is home to the pine trees. These forests cover most of the quaint lands of Himachal Pradesh and Uttarakhand. But these states are battling frequent forest fires and its environmental impact caused by an excess of dry pine needles on the forest floor. With a forest cover of about forty thousand square kilometres, the environmental distress caused by these fires is incalculable with no significant solution to the problem.

'Cheer Project' is a research into pine needles in which this abundant and unwanted material is developed into a 100% bio-based and compostable composite material.

By separating fibres of the needles through shredding, new applications and possibilities are created. The fibre is further developed into a composite with the help of natural binders and waxes. The developed material is 100% bio-based, compostable, recyclable, fire retardant, water repellent and causes no pollution or waste in the process. It is a solution that tackles the global plastic issue, locally, through an amalgamation of Craft, Design and Engineering. The entire process of production was designed to be practised as a sustainable craft to help generate income in the rural areas of Himachal. It has been an experiment to understand the root of a local material and its potential and possibilities in an ever-increasing demand for alternatives for the production of sustainable objects. The ultimate concept rested on the fusion of local craftsmanship and sustainable utilization of a naturally abundant novel material; the rediscovery of the humble pine needle. 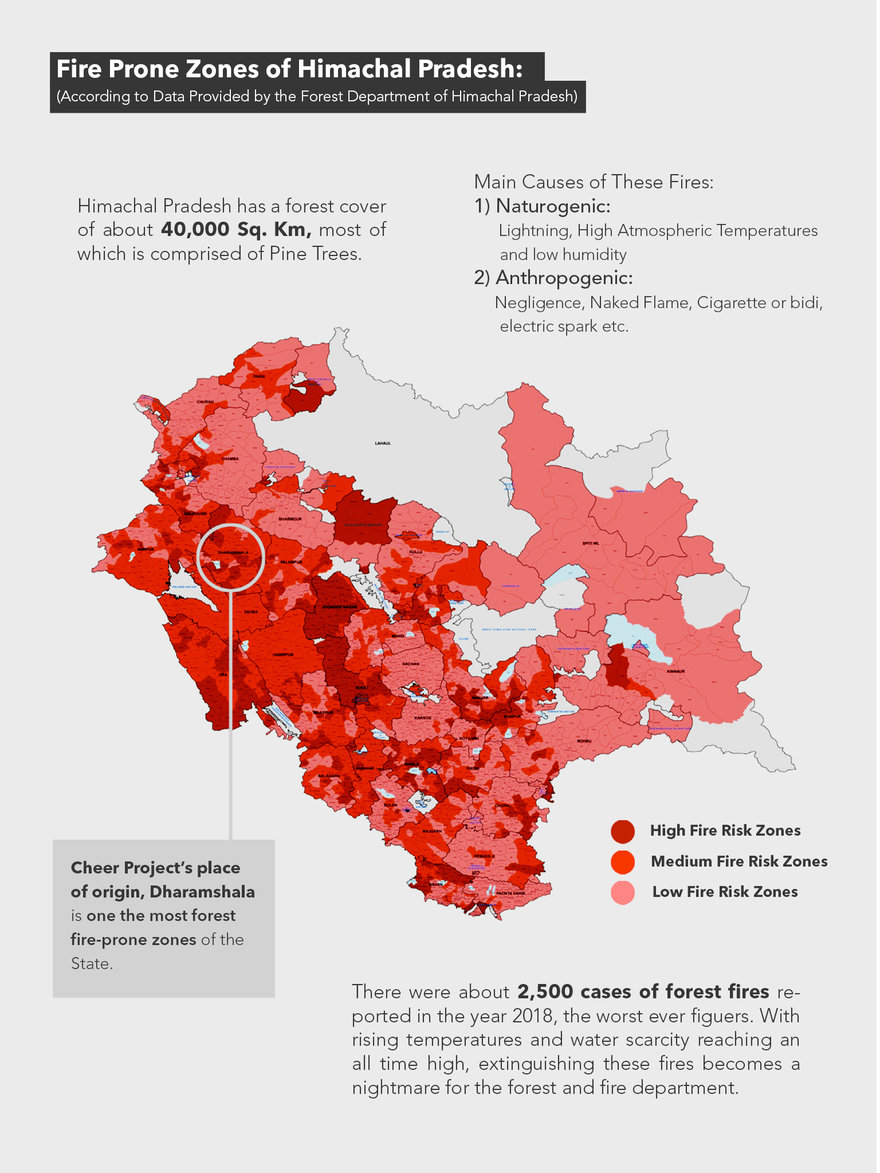 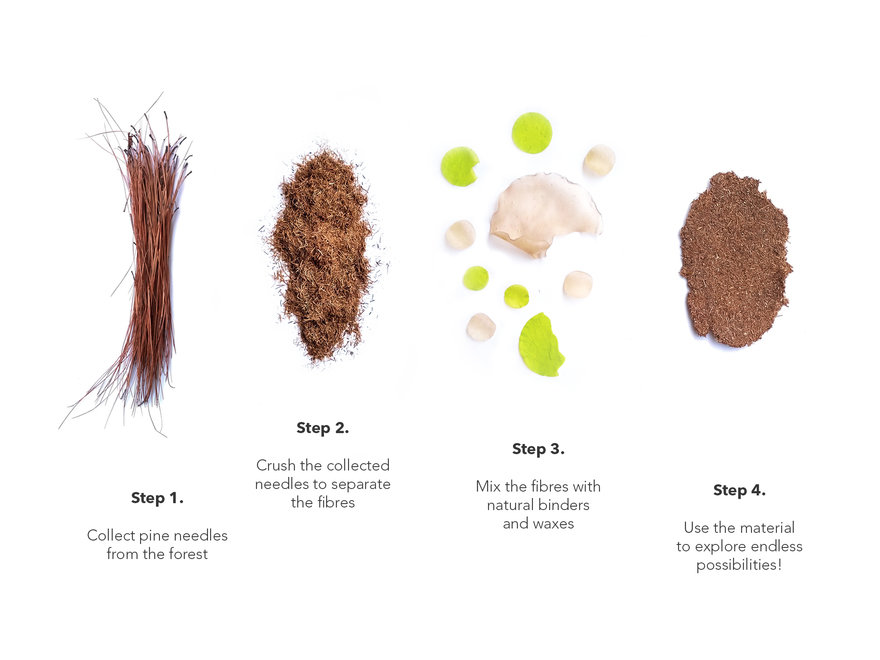 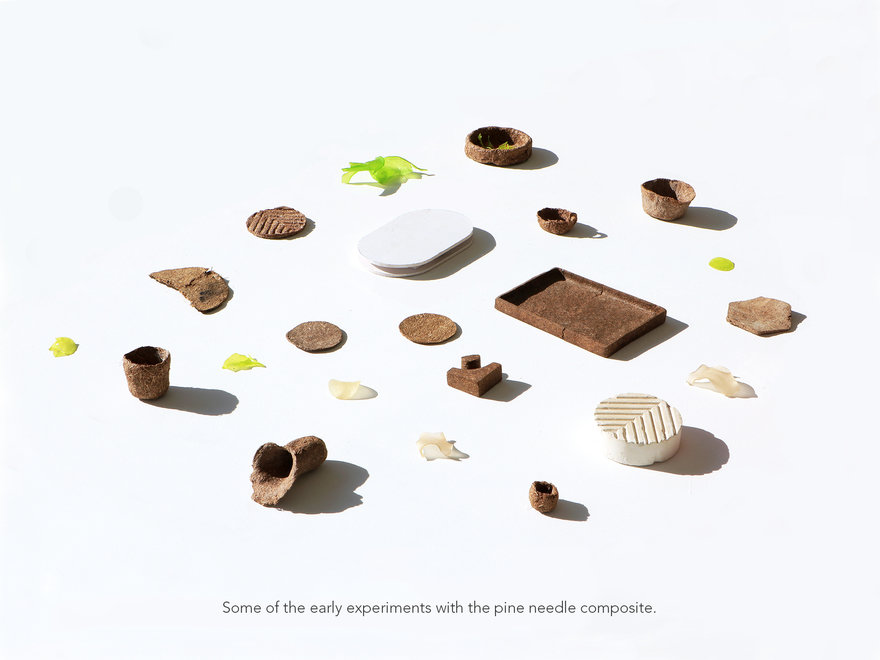 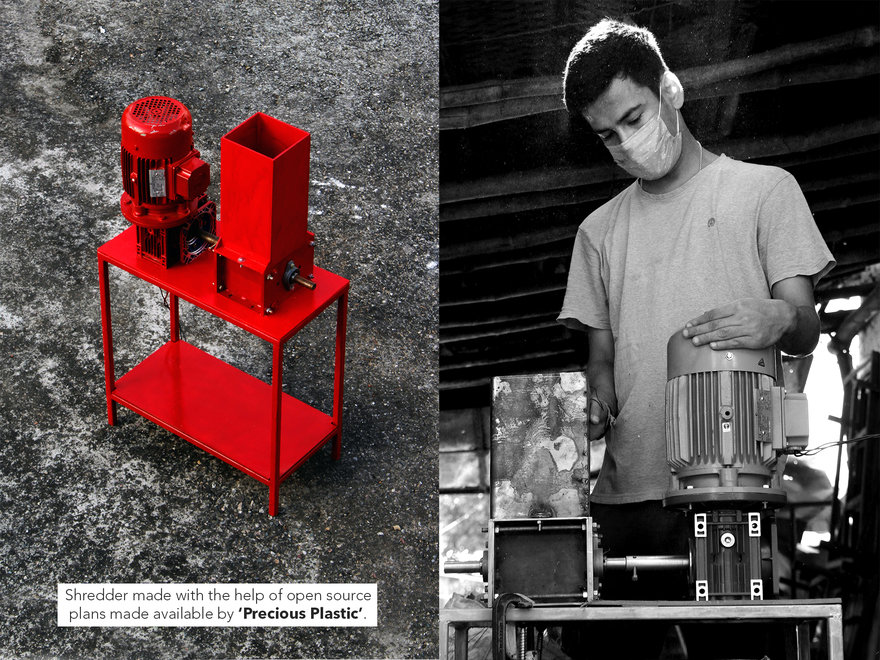 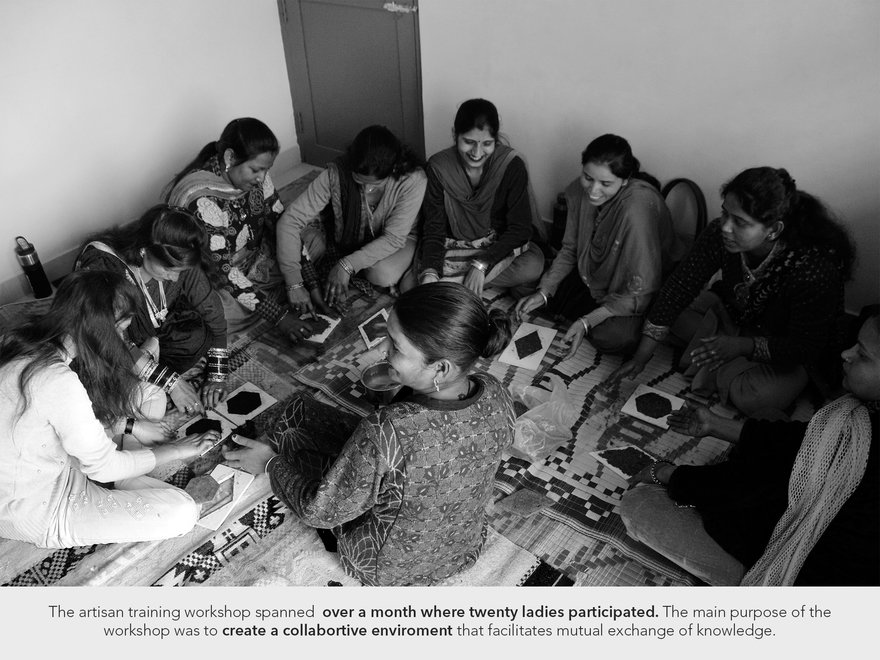 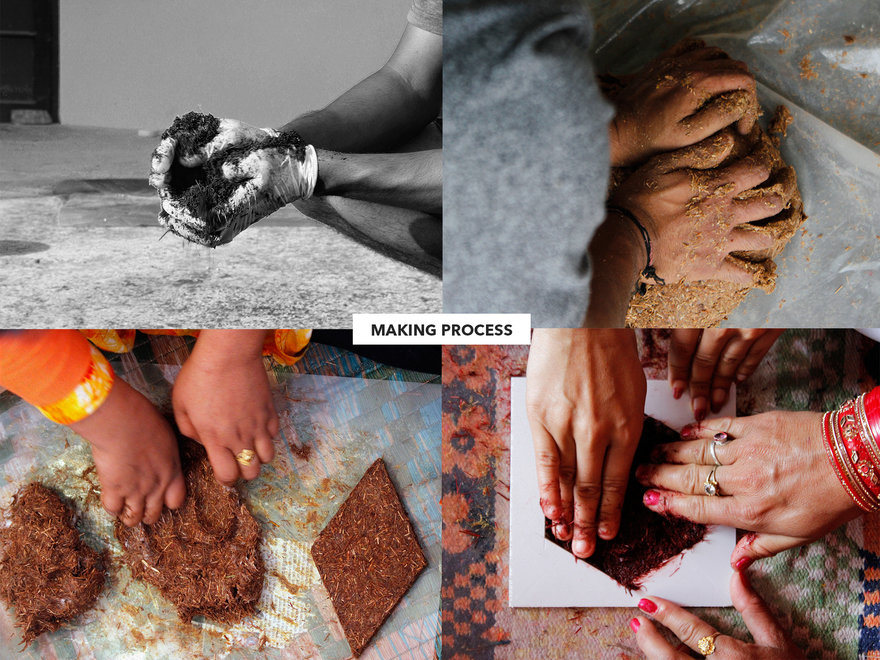 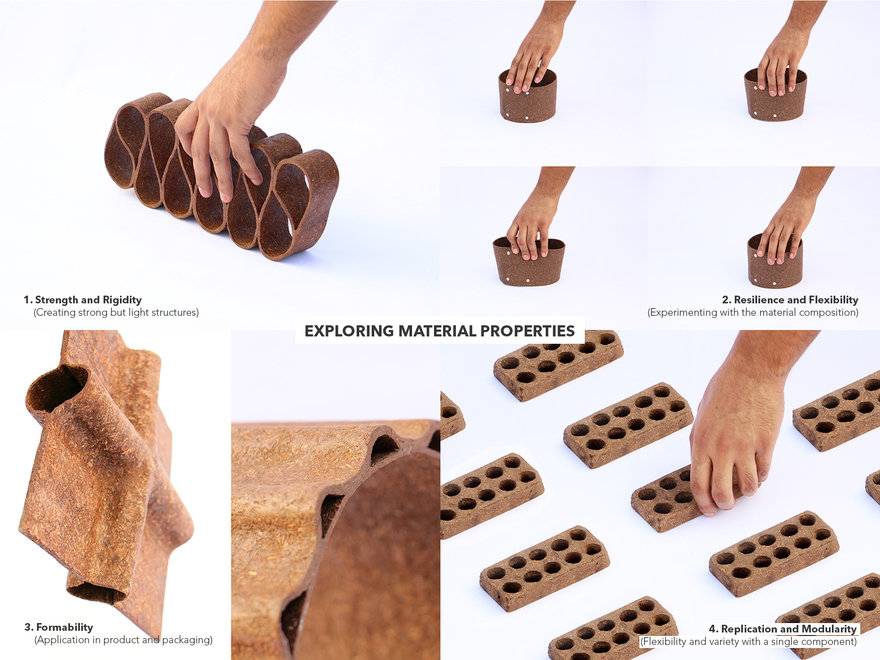 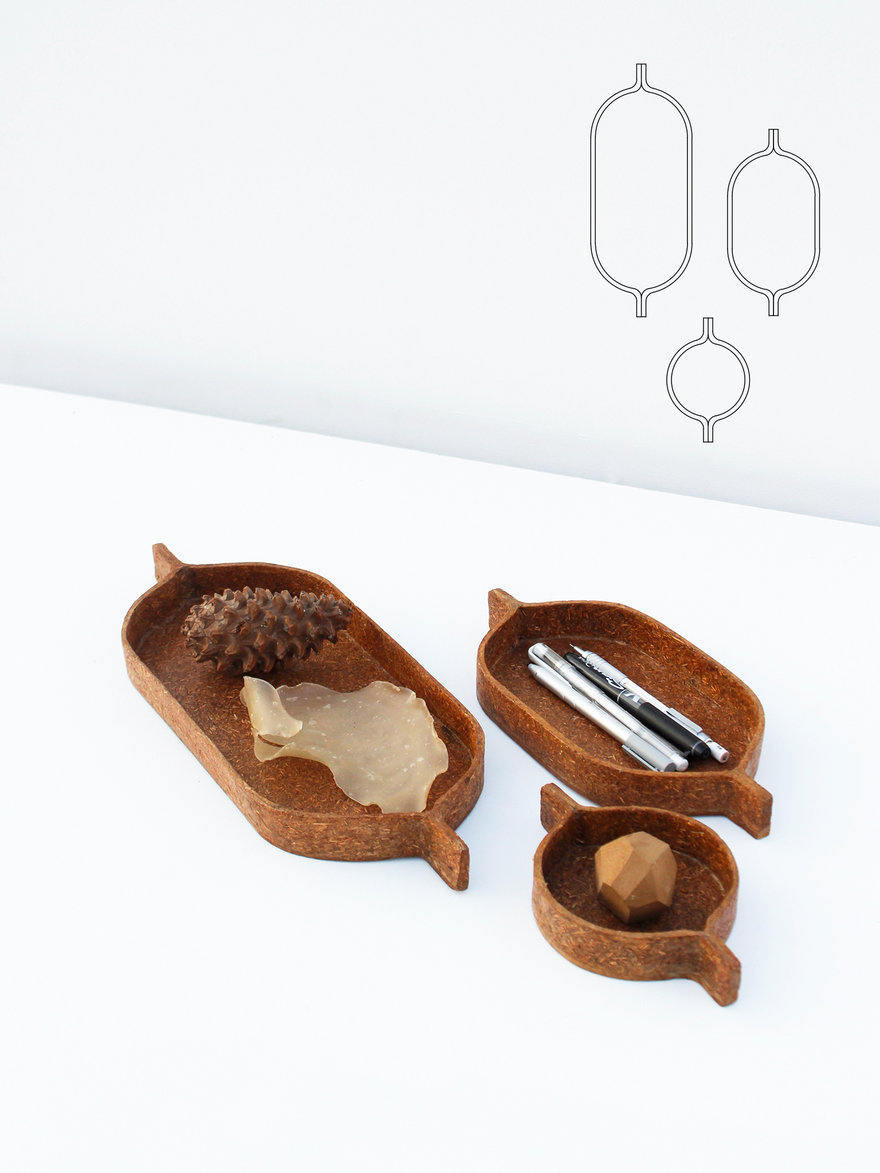 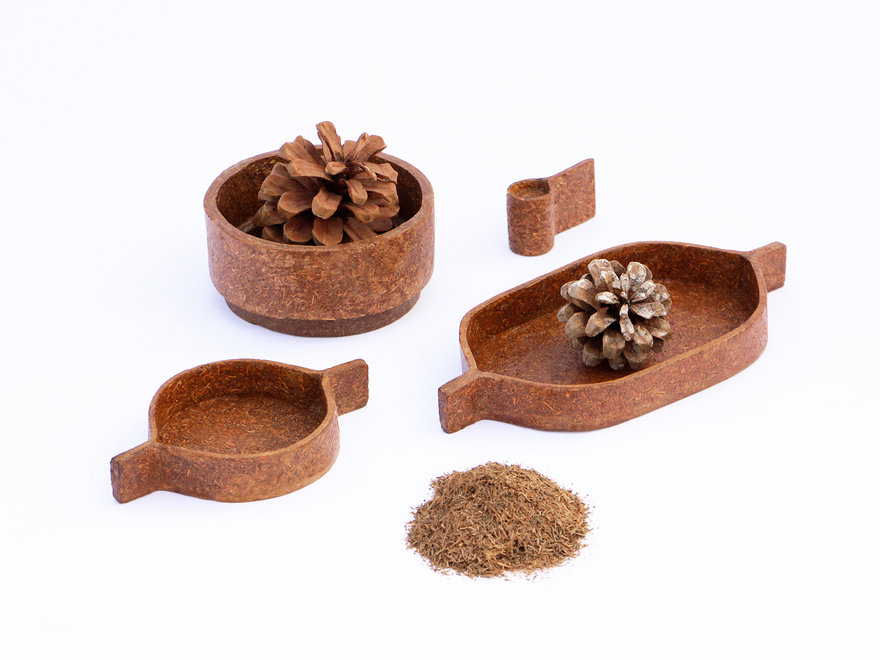 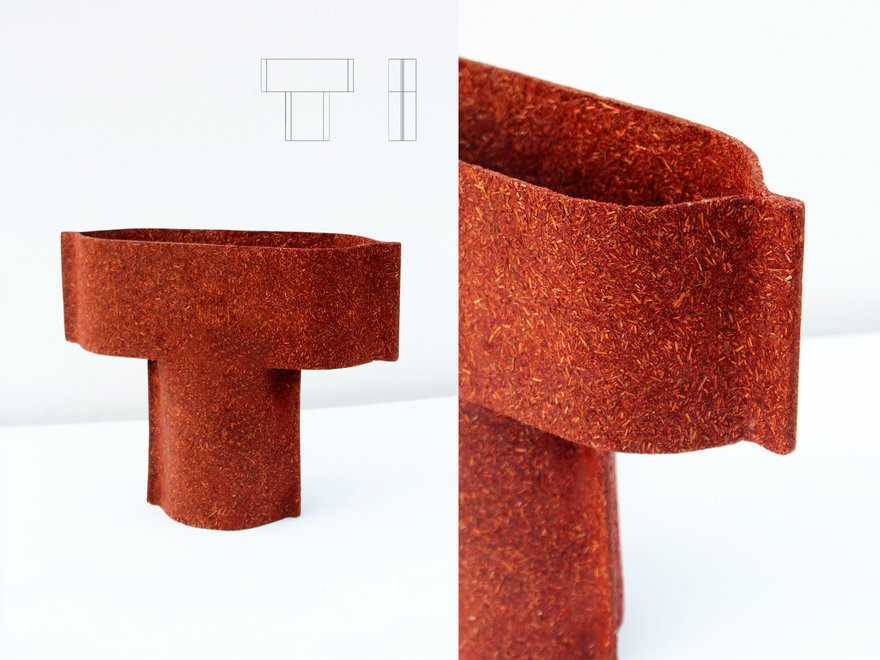 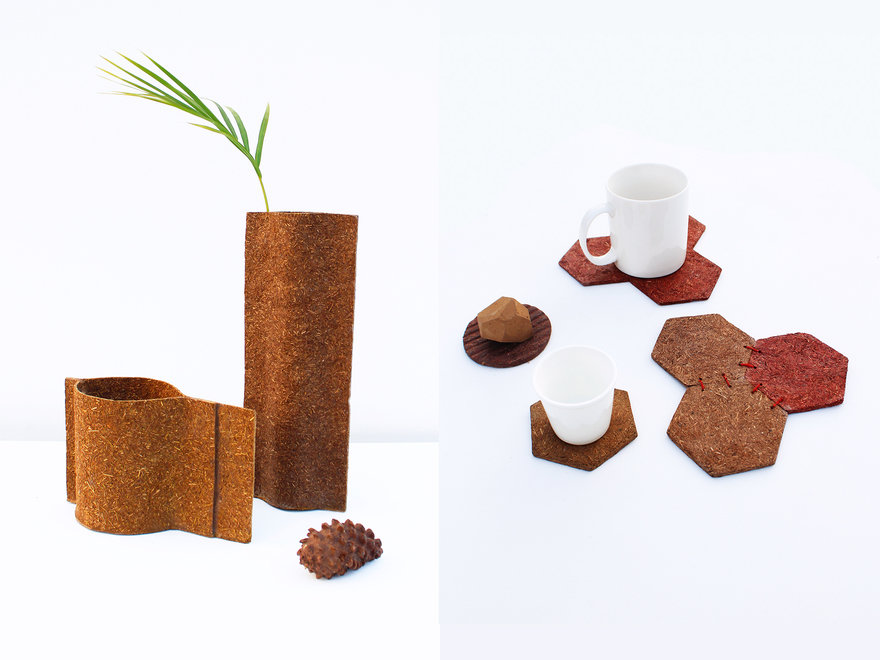 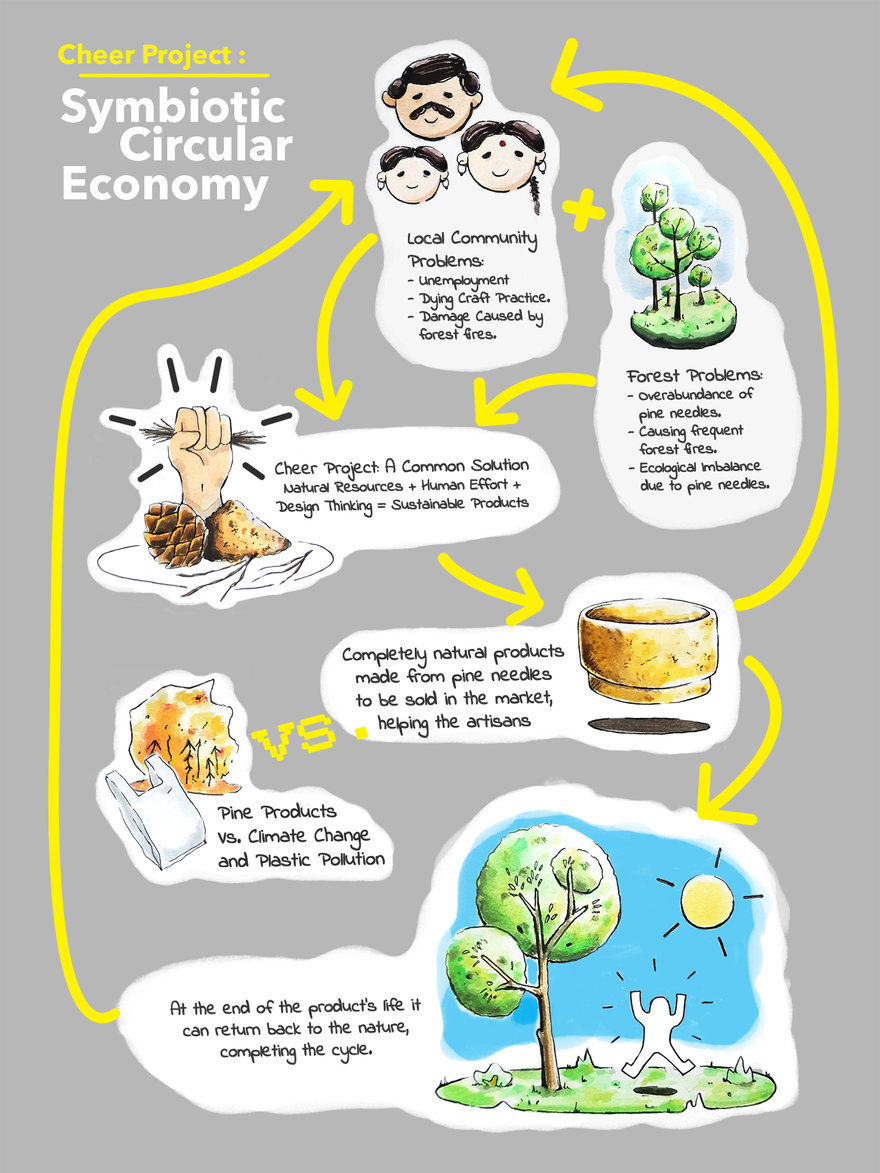 Offering a multitextured display of lofty snow-clad mountains, thickly forested valleys, cascading streams, and terraced fields, Himachal Pradesh is every traveller's dream. Unfortunately, this hilly Indian state also faces its share of resource-curse. The curse comes from the menacing environmental complications caused by pine needles, the fallen leaves of pine trees. Over time these needles pile up to on the forest floor to form a dense cover. Owing to their dry nature, one ill-fated spark ignites a fire in nearly 40,000 sq. km, causing immeasurable damage to life, property and the entire ecosystem that far exceeds our imagination.

The project was developed as a graduation project during my time living in Himachal Pradesh as a design student. Having lived in Himachal Pradesh for four years, the pine forests became part of my daily life. It was during this time that I was introduced to the pine needle coiling craft that was practised by the local artisan communities. It had never struck me that such a thing could be achieved with a material that is generally considered to be waste. Unfortunately, this craft is at the brink of extinction due to declining demand and loss of relevance. Having spent time with these artisans made me empathise with their problems and to think of ways to help them. My research began with backtracking my way from what was in front of me, the artisans and their craft.

Interestingly, I found out that one of the reasons this craft was practised was to prevent forest fires from reaching their villages. My intrigue led me to delve deeper into the subject of 'how a material can have such a huge impact on an ecosystem and its relation with human activities'. This drew my attention to the subject of forest fires and its relationship with this craft.

During summers the pine trees shed their needles and due to their incredibly robust construction, they don't tend to biodegrade easily and forming bed like cover over the entire forest floor. These needles also have lignin present in them that proves to be an excellent fuel. Due to their dry nature and a forest cover of nearly 40,000 sq. km., these forests become a natural disaster just waiting to happen.

On the opposite of this situation, the state of Himachal is also facing water scarcity for the past few years. Putting it into context with such a tremendous scale of fires, it becomes a nightmare for the fire department to extinguish these fires. Upon further research, I found out that the pine needles are naturally coated with a thin layer of silicon to minimise the loss of water from its surface. This makes needles harder to decompose under natural circumstances. This bed of pine needles further makes it difficult for rainwater to reach the ground and replenish the groundwater table as most of the water flows over it. If it is combined with monsoon rains, this phenomenon turns into flash floods and soil erosion, for which Himachal is prone.

The research provided me with insight on the interrelated nature of these complex problems. It was at that moment that I started to understand the gravity of the situation.

Designing a system of solutions: 'From Earth to Earth'

The objective of the Cheer Project was to come up with socially useful solutions for the problem of overabundance of dried pine needles and its hazardous environmental repercussions. It seeks to reinvent the way we perceive pine needles to provide a solution for these complex and interrelated problems. A new way of thinking that tackles the plurality of the situation with a holistic approach. A system of production processes, products and sustainable functioning that gives momentum to pine needle as a revolution that empowers the local communities and provides them with economic sustenance, while providing an alternative to plastic in these environmentally tragic times. The principles upon which the model works was not the confrontation of humans and nature, but their assimilation. Where human progress is enhanced by nature, kindling a symbiotic relationship between humans and nature that we seem to have forgotten with time.

The proposed model of operation is circular in nature. The locals procure raw material from pine forests. Needles are then processed in purpose-built machinery (shredder, in this case). It is further mixed with locally-sourced natural polymers to create a bio-composite material which could be used by artisans for making sustainable objects like containers, vases, frames, boxes, etc. Once linked to the market, the revenue generated from this model would help strengthen the rural economy, restore the pride of the artisans and generate a sense of ownership in the local communities.

Since the objects fabricated through this model are made with natural materials, they can be easily composted at the end of their lifecycle or can be recycled and used for making new objects. This way the objects made can return to earth, where they came from. While treading lightly on the environment, the pine needle demonstrates all the desired traits of plastic minus the adverse impact on the ecosystem.

The Process: 'Trial and error'

The pine bio-composite material is multifaceted. It comes from a source which is natural, abundant and virtually free of cost. Products made out of this material are sold in the market to generate income and reduce the instances of forest fires in the vicinity. The clear forest floor would then absorb water easily, restoring the groundwater table.

This idea seemed abstract and complex, but not impossible.

For any project to materialize, the prerequisites need to be in place. I lacked just that. Since it was a rural setup, issues of resource availability, accessibility and affordability sprang up. Surprisingly, this came as an opportunity in disguise. I began experimenting with simple hand tools like kitchen and farm equipment. Every and anything available could get the job done. Finally, the improvisation that worked best was a combination of fodder cutter and a kitchen blender.

After the fibres were separated from the needles, I started experimenting with binders so that fibres could be formed. My initial experiments consisted of mixing these fibres with synthetic epoxy resin and pressing the compound into wood moulds held together with clamps. The result showed potential but the use of toxic resin contradicted the core principle of 'from nature to nature'.

The continued search for natural binders led me to bioplastic. The characteristics achieved with this material were quite fascinating. It led me to conduct experiments to make a natural binder of my own. After long weeks of research, something serendipitous happened. I came across 'Layie', a natural glue made of wheat flour and corn starch. Upon mixing, layie enhances the earthy, Christmas-y smell of pine needles filling the room with a balsamic fragrance. It was exactly what I was looking for. After refurbishing the mixture to my necessities, the results turned out promising.

For objects prototyping, my initial idea was to continue with compression moulding as I had done with the epoxy resin mixture. However, after many failed attempts, I discarded the idea of moulding the material. I turned to other manufacturing processes that shared similar properties. The one that seemed the most plausible out of all was terracotta. I experimented with different processes like slab work, pinching and press moulding.

Once the material and techniques were finalized, an experimental workshop was conducted in collaboration with the Development Commissioner, Handicrafts and Handlooms Export Corporation of India. The month-long workshop was conducted with twenty artisans who learnt about and practised the newly developed techniques. With a mutual exchange of knowledge and peer-learning, the workshop allowed all of us to reflect on ways to reach full human potential while keeping the environment in mind.

Until I saw charred bodies of baby koalas and kangaroos and heard about the culling of thousands of camels, I always wondered what Himachali schools' motto 'Live Local, Think Global' meant. The Amazon rainforest fires and Australian bushfires were a wake-up call for the whole world. Today I am more adamant than ever in my endeavour to fight climate change. Cheer Project helped me realise how with the right approach and persistence, the solution to the problems of a local community can also hold a torch to global issues like climate change.

If translated to Hindi, pine becomes "cheer". If read in English, it becomes a "shout for joy or in praise". That is exactly what the humble pine will one day do for its guardian communities: bring them joy.