An internet shutdown is an intentional disruption of internet or electronic communications, rendering them inaccessible or a specific population, often to exert control over the flow of information.

Access to information is the epitome of freedom in our time, shaping the way we learn, think and act. The Internet is both a promise and a threat. How might we resist government-imposed Internet shutdowns that have become one of the trending tools of 21st-century repression?

Fallback is an alternative platform providing access to real-time news during times of Internet shutdown. With Fallback, users have the insurance of accessing daily news even if there is an Internet shutdown. The mission of Fallback is to build empathy, increase global visibility and provoke action on Internet Shutdowns worldwide.

Fallback builds a robust system for information accessibility in uncertain times triggered by powerful forecasting algorithms providing a backup right when it is needed. Fallback constantly monitors the probability of Internet shutdowns worldwide taking advantage of both qualitative and quantitative metrics to generate insights and calculate the possibility of an Internet shutdown within a reasonable time frame to deploy pre-emptive action. High-risk forecasts trigger our transmission service to users in a seamless way, allowing them to adapt to changing situations effortlessly and empowering them with their own choices of sources of news.

Upon a high-risk prediction, headlines and articles are scraped from news platforms pre-customized by the user, it is encrypted and sent over satellite to the Fallback Portal devices. Portal receives data over satellite, decrypts it with a private key, formats it into news articles to fit the Fallback UI. The Portal is not only designed to be aesthetically non-threatening, functionally minimal and robust for different environmental conditions but, it is also designed to be device and software independent. A user can use any wifi enabled device they can get their hands on or borrow to access the data received by the Portal, without the need for a pre-downloaded software or app while still maintaining anonymity since no data gets stored locally. Once connected to the hotspot provided by Portal the UI pops up on the available device regardless of its operating system or pre-existing software or apps. The simple UI interaction aims to maintain some normalcy in the experience of browsing online news. The transmission continues until the Internet shutdown is over or the risk levels decrease.

Ultimately, Fallback hopes to support the large network of leading NGOs and nonprofits field staff around the world and in high-risk nations who play an imperative role in supporting their communities in uncertain times. Fallback's mission is to build empathy, increase global visibility and provoke action on Internet Shutdowns worldwide and to focus on the importance of investing in technology in defending human rights. 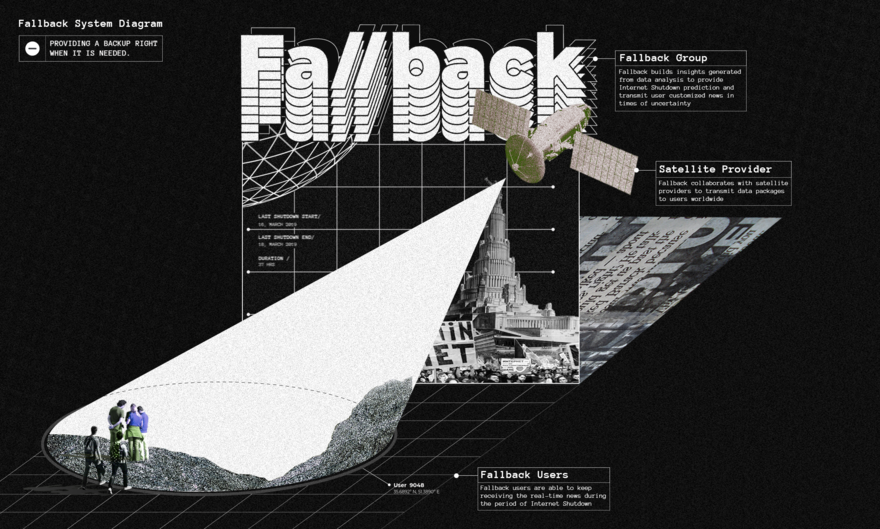 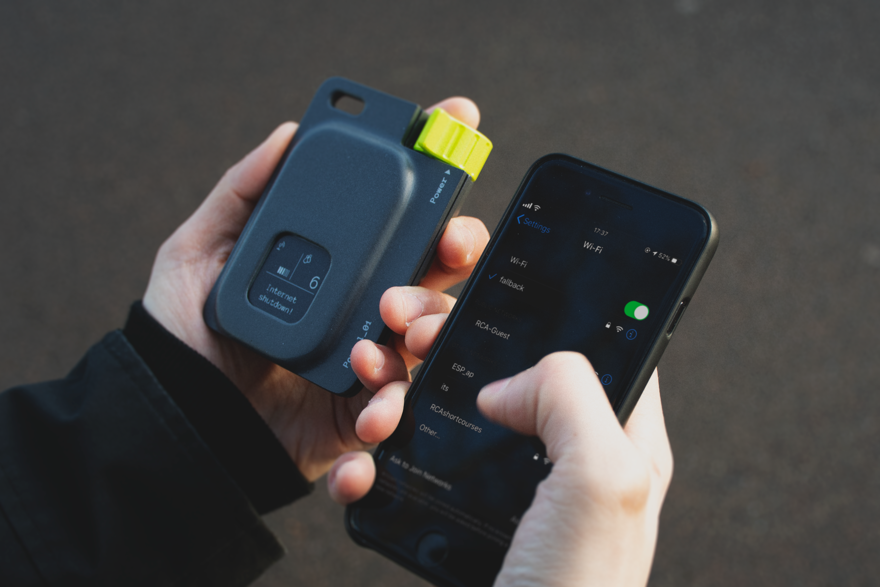 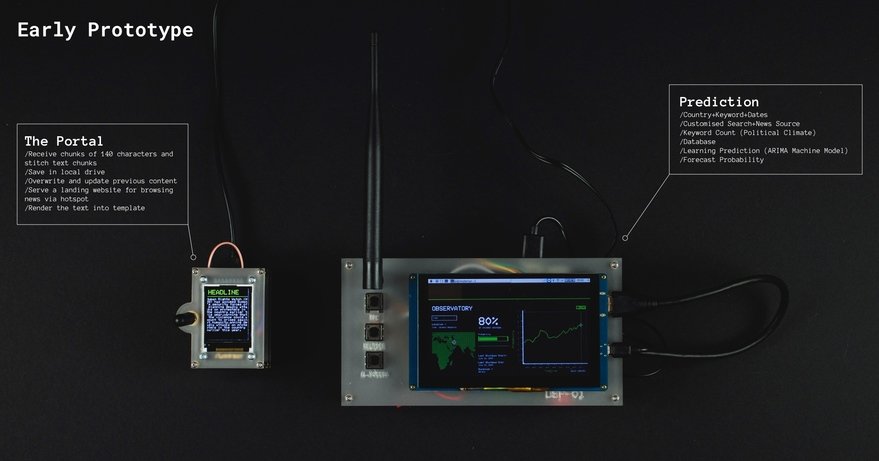 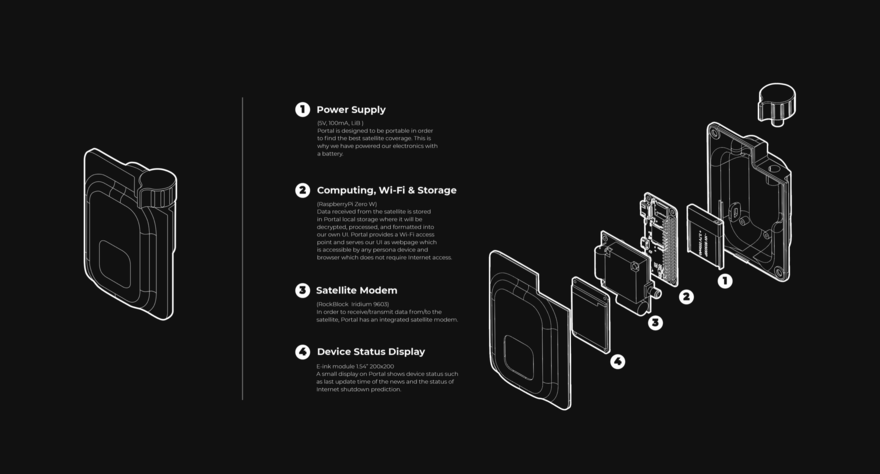 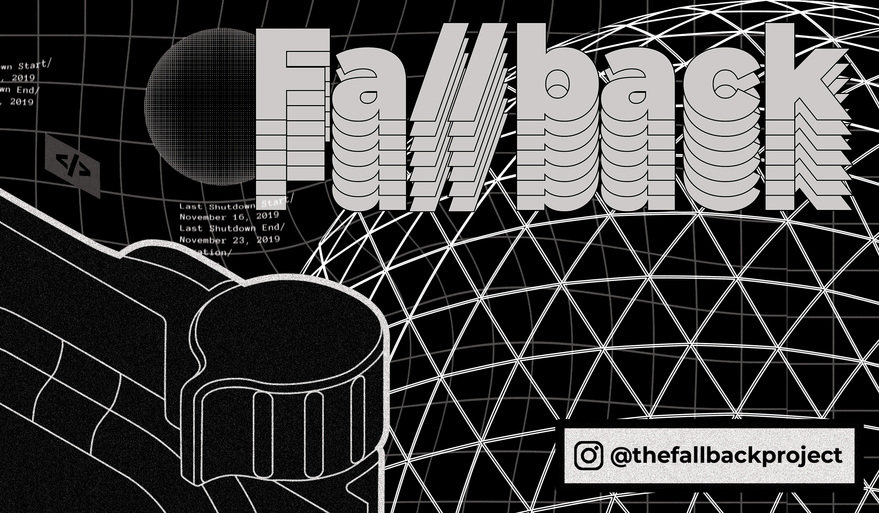 Over the summer months, our team faced challenges connecting with each other due to being in different places with very different levels of Internet accessibility. During the same period, we were shocked and moved by the Internet shutdown that started in Sudan in June (2019) that lasted over 30 days. This incident resonated even more with us since one of the members of our team lived through the 2009 Internet shutdown in Tehran and never expected it to happen again in 2019 in the middle of our work on this project.

As a team, we come from very different regions around the world which sometimes seem to be in conflict and have their distinct way of operation. These differences extended to our unique experiences towards the internet and the coping mechanisms we had developed to access information. This gave depth to our experience with this project as it combined a diverse set of first-hand experiences and perspectives but it also served as a proof that people can come together and unite through hard work for a common goal and belief in information access as a human right.

In order to get a better understanding of the context of this problem, we interviewed people who had been through an Internet shutdown or who's family members or friends were going through it during our research for this project (e.g. Internet shutdown in Iraq this past October 2019). We also interviewed human rights activists and individuals working for NGOs.

We like to use the analogy of a time-capsule to summarise the experience of people inside an Internet shutdown, it creates extreme feelings of isolation and fear resulting from not knowing what is happening even a few blocks away let alone in a nearby town. Complete lack of access to real-time news is a traumatic experience, sparking fear, vigilance and a heightened sense of lack of control, weakening the ability of communities to fight back the siege. During turbulent situations, some individuals in key roles are considered as a reference point and a source of trusted information and advice. However, communities become warier and less trusting of these key players (e.g. journalists, activists, advocates) due to the same lack of news (the ones that communities consider reliable and credible) that is suffered by all during an Internet shutdown. Lack of real-time news undermines their trustworthiness and reduces the effectiveness of any effort to inform and comfort their communities.

Therefore, it was imperative for us to work on news access for these key individuals during these uncertain situations and providing them with an effortless backup. It was also important for us to prove that Internet shutdowns can be forecasted because, for thousands of years, people have developed methods to predict events that are beyond human control, including disasters like droughts, earthquakes and recessions and we have invented many tools and instruments to do so. However, we had yet to develop a tool or instrument to predict and forecast disastrous contemporary disasters of Internet shutdowns. While a rainy day or stormy weather cannot be avoided, people can be better prepared for it.

In order to create our databases, we studied past Internet shutdowns and did a trend analysis of certain keywords we found to be relevant to the climate that surrounds events leading up to an Internet shutdown. We also factored in the complexity of Internet infrastructure in a country including the number of Internet Service Providers which plays an important role in the feasibility of shutting down the Internet on an entire nation. Another element we factored in was the existing level of information control in a region, for example, censorship and throttling. We found that places who have a history of Internet shutdowns are more likely to have existing mechanisms for information control in place. One of the qualitative metrics that we created was a psychometric rating based on the leadership and decision making style in a specific region that can have a direct impact on the likelihood of Internet shutdown.

Upon a high prediction of Internet shutdown, Fallback starts scraping the subscribed news websites and extract articles and headlines and without images and visuals. In this sense, Fallback dials the Internet back to the minimum required data. Every Fallback member will receive their own pre-customised publication selection and pertaining to their geographic area of interest or work. The real-time news transmission sequence to our registered members will be triggered exactly when a high-risk prediction is detected and continues until the risk or shutdown is over.

The Portal device uses a satellite modem with worldwide coverage to receive data. Portal receives data over satellite, decrypts it with a private key, formats it into news articles to fit our Fallback UI. This data (i.e. news) is initially sent from the Fallback HQ to our chosen satellite provider (upon a high-risk prediction) then Portal automatically connects to the satellite to receive the data. Portal does not provide the Internet as we know it, it only provides the information a Fallback member has pre-subscribed to if they find themselves in an Internet shutdown.

This user interface is available via the wifi hotspot provided by the Portal device. Portal devices decrypt the received data and convert it to meaningful text using our protocol and formats it into our news browsing user interface. Serving our news browsing UI and providing a wifi hotspot was prototyped using an ESP8266 module which is capable of serving our formatted news platform shown in the visuals. When users connect to this wifi access point (called Fallback), they get redirected to our news browsing interface. Smartphones and laptops often get confiscated in the events that surround Internet shutdowns e.g. protests, therefore, we wanted Portal to be device and software independent. A Fallback Portal user can utilise any wifi enabled device they can get their hands on or borrow to access the data sent to them without the need to have pre-downloaded software or app. Portal and the Fallback UI maintains the user experience of browsing news online and is capable of sharing this experience to multiple users.

1) Fallback considers access to information to be the epitome of freedom in our time, shaping the way we learn, think and act.

4) Fallback believes that by building robust systems of preparation and pattern recognition you gain the power to alter the course of history and reverse the inevitable.

5) Fallback believes that with every Internet Shutdown the agency of individuals is challenged. A society cannot prosper under threats of isolation.

6) Fallback recognizes that an information siege is the most powerful form of contemporary control and repression.

7) Fallback fights back on ignorance and seeks to break open these echo chambers and time-capsules of internet shutdowns.

We had many challenging encounters when designing for a politically sensitive project. The first challenge was internal, with our own personal fears of working in the realms of design activism. The second challenge was the wariness, cynicism and reluctance we faced from people who have had first-hand knowledge of the unforgettable experiences that come hand in hand with Internet shutdowns. We tried to carefully navigate these conversations often using different mediums and modes of communication. We learned that the trauma of Internet shutdowns are long-lasting and it makes those who experience it apprehensive and even passive. Finally, we learnt that design along with technology plays an indispensable role in building a safer space for an active and constructive conversation on provocative yet urgent topics impacting our present and future lives.