Moxy East Village is a 286-key, 13-story micro-room hotel designed by Stonehill Taylor with interior architecture by Rockwell Group. Located on East 11th Street in Manhattan, Moxy is situated across from the famed music venue Webster Hall and just blocks from NYU and Union Square. Rockwell Group continues its collaboration with Moxy, having designed three key amenity spaces for the Times Square location of the hotel, as well as the amenities and public spaces of Moxy Chelsea and the future Moxy South Beach hotel in Miami.

In a nod to Moxy’s vibrant, ever-transforming neighborhood, Rockwell Group’s design concept is based on a kind of urban archeology that references the city’s past, present, and future. The hotel is conceived as a non-linear timeline, and each floor reveals a different layer in the neighborhood’s narrative—as well as projecting its future—creating a sense of discovery for guests and transforming its stories from day to night. We celebrated the patina of New York—the well-loved layers from different eras that co-exist in every neighborhood or even within a single building, evoking memories as well as daydreams. 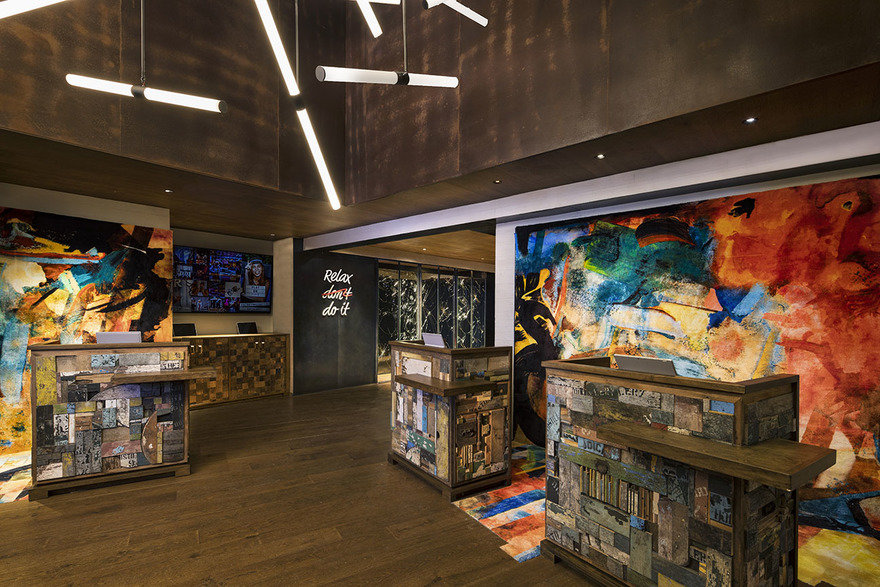 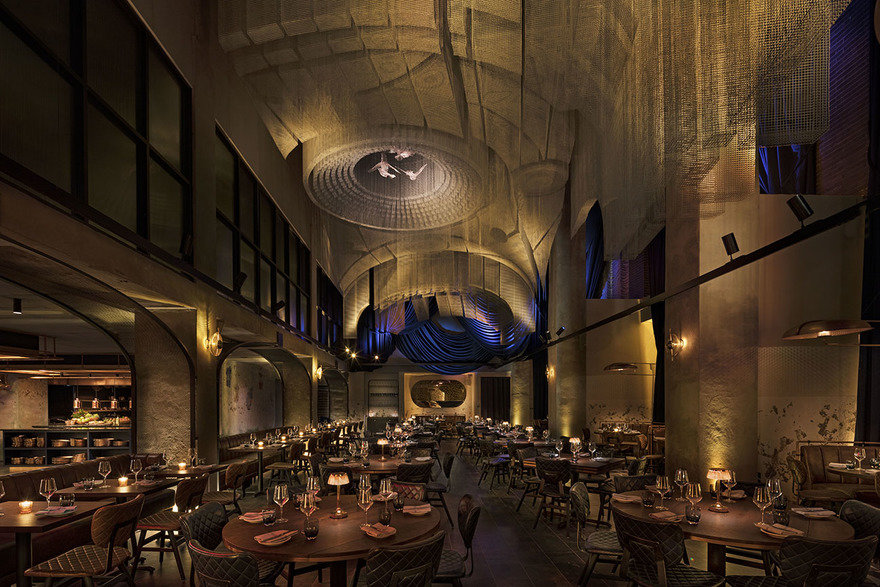 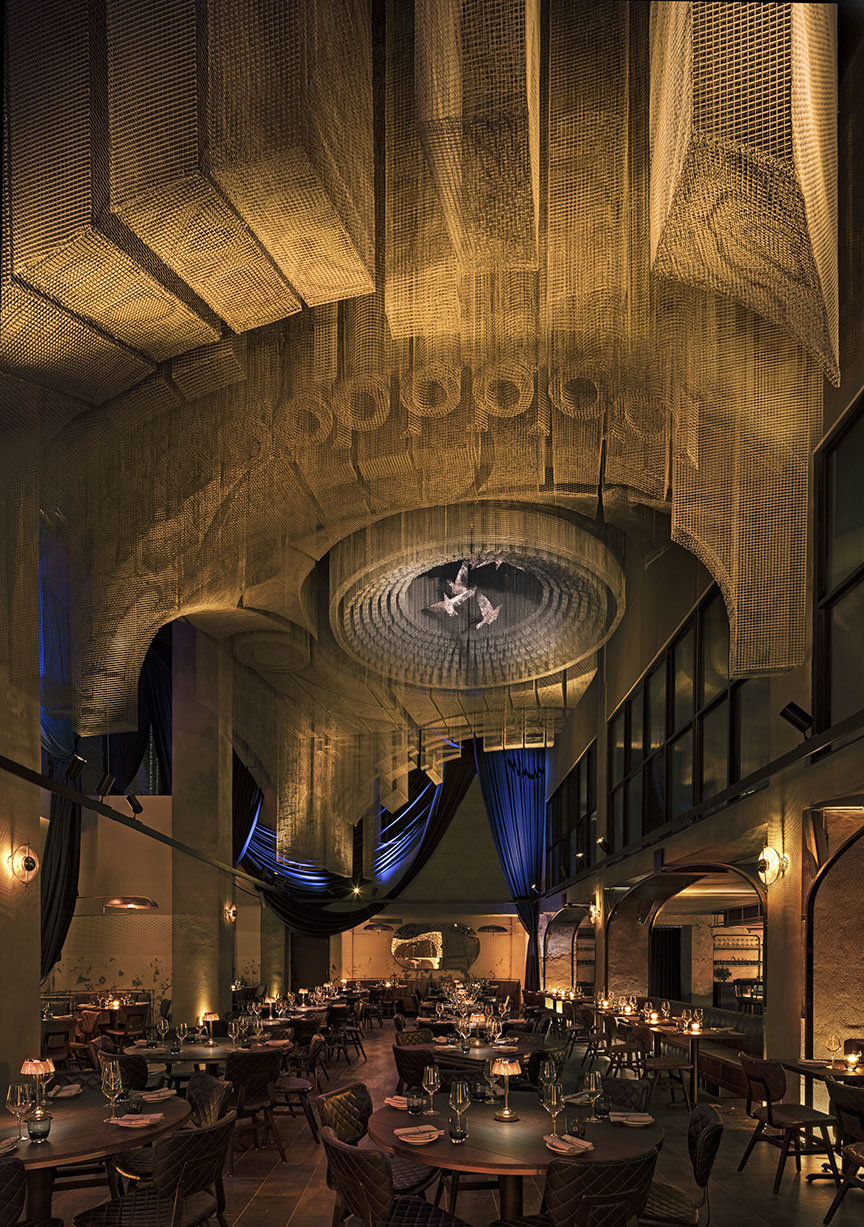 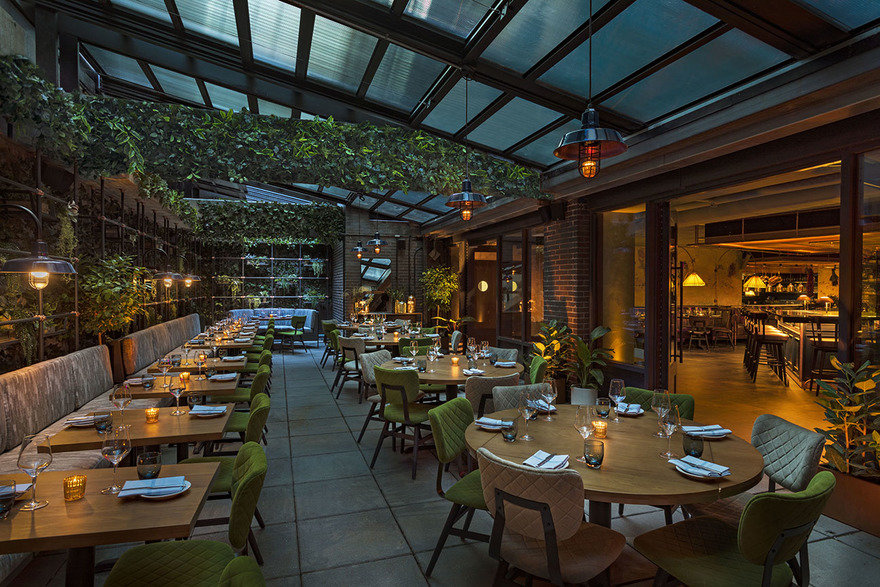 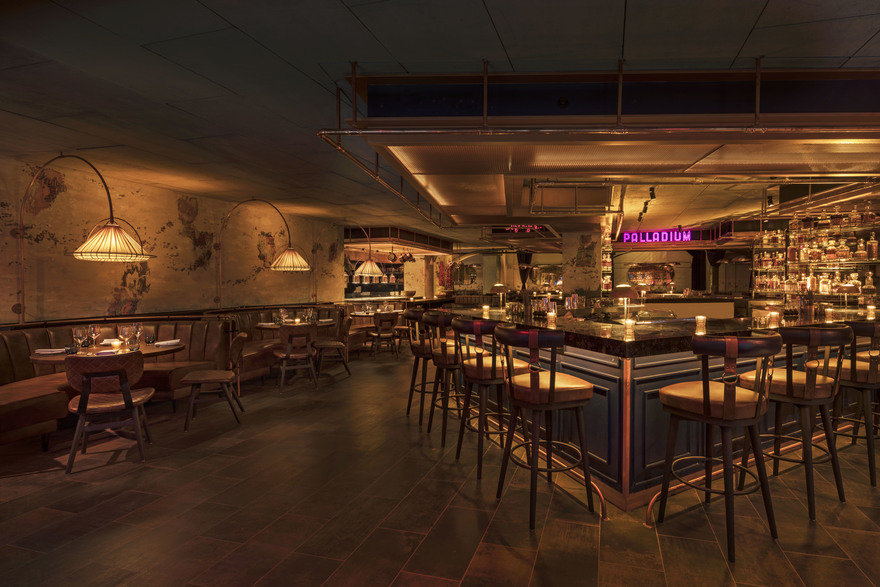 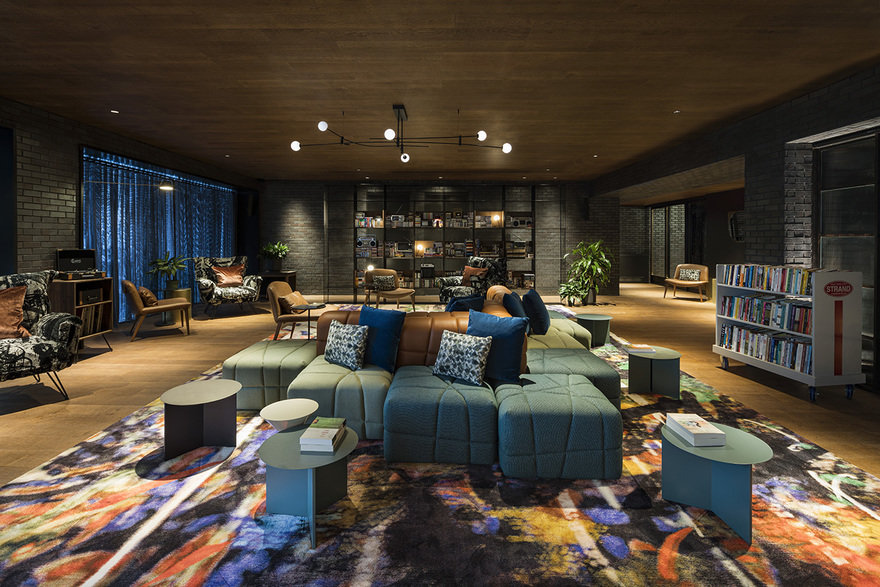 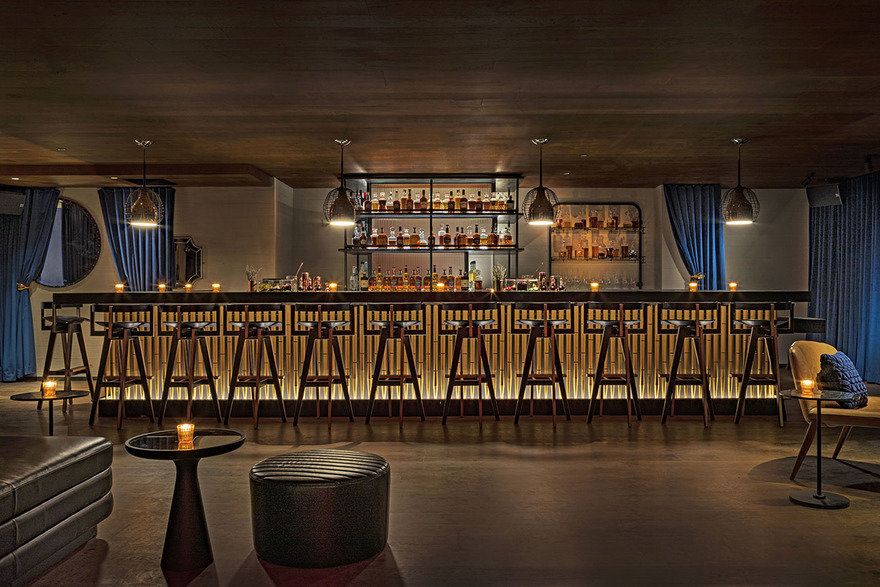 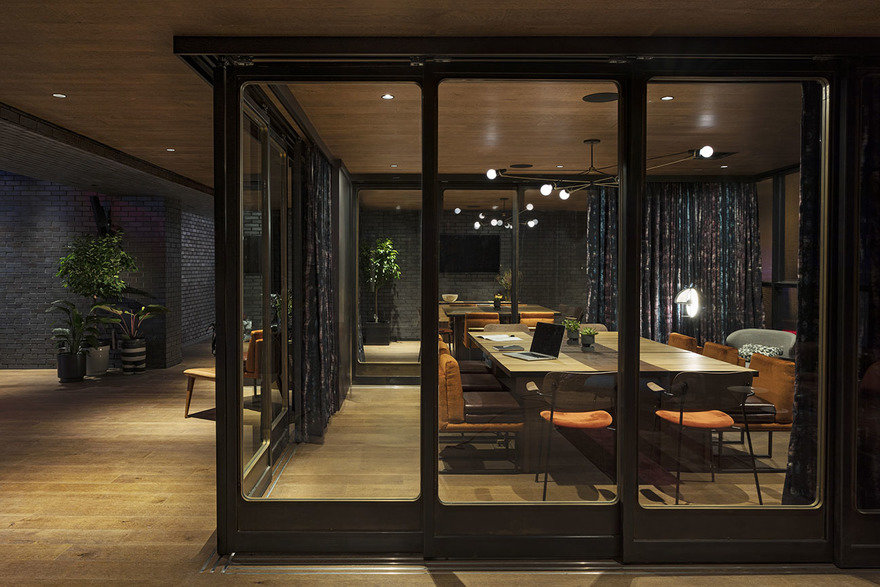 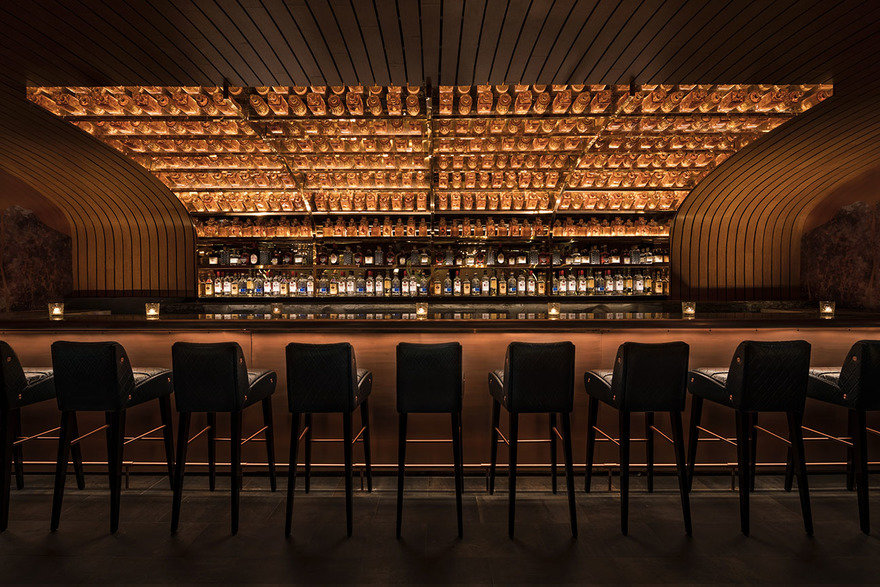 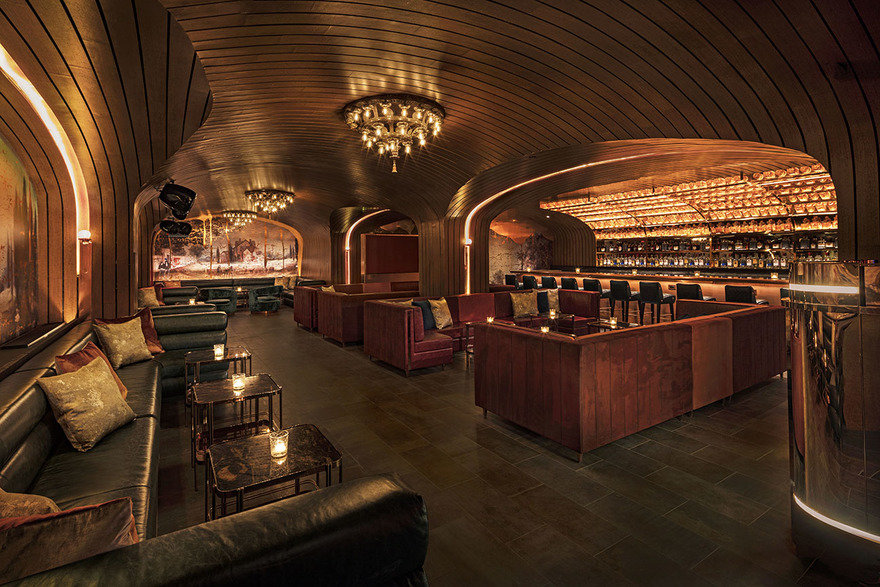 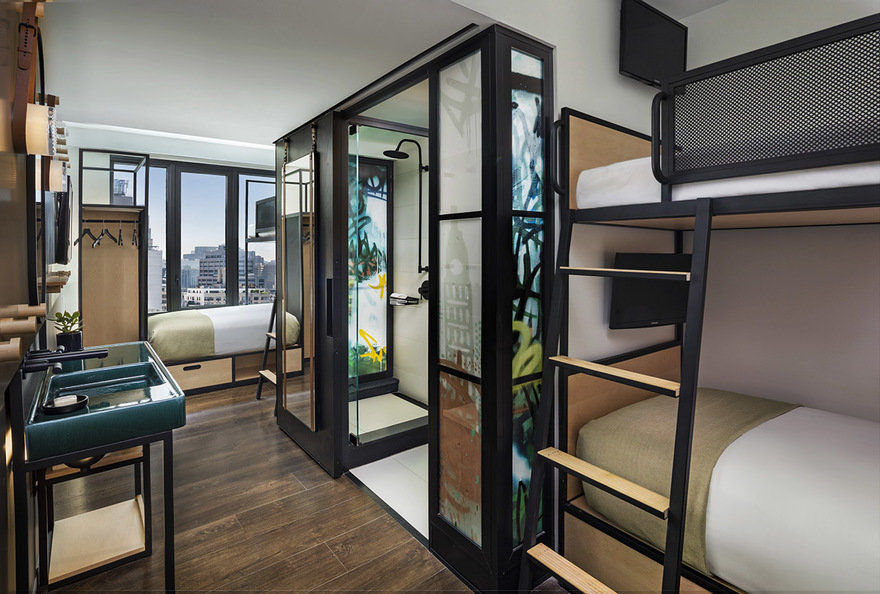 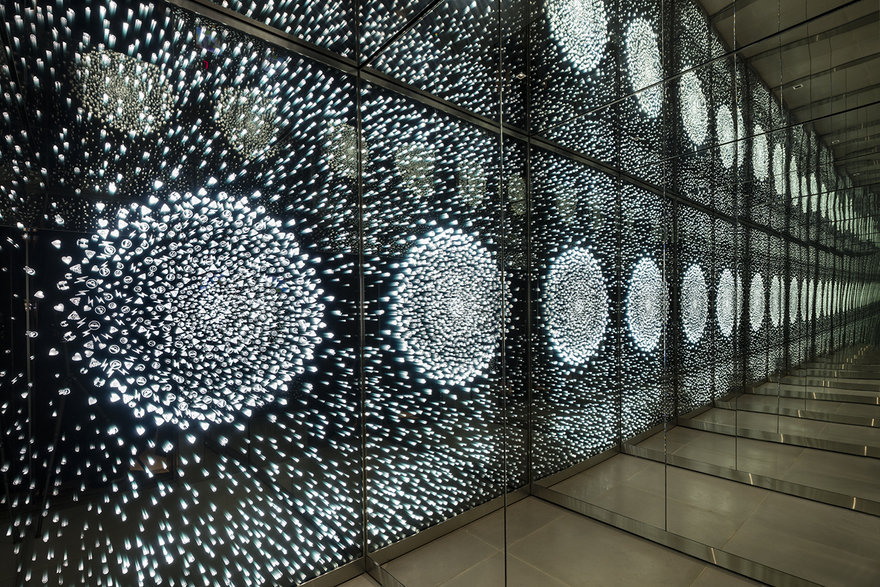 Guests enter Moxy East Village through the ground floor, which is just below street level. Cor-ten steel walls extend from the façade into the lobby. Smooth concrete at the entrance stair meets blackened steel, and board-formed concrete details. The check-in desks by local artist Michael Sanzone Studio are made from found objects and evoke patch-worked antiques. Influenced by downtown New York’s role as an incubator for the dissident creative scene of the 1970s and 80s through the present day, the hotel’s public spaces—including the lobby, Moxy’s signature 24-hour grab-and-go bar, and a lounge—have a raw, gritty look inspired by the neighborhood’s art and music scene. A graffiti graphic tapestry by the LIC-based studio En Viu on the wall behind the check-in desks bleeds on the floor, creating a surreal moment. A grand staircase that playfully evokes a New York City fire escape leads guests to the hotel’s restaurant. The elevators that transport guests from the lower level to the upper level guestrooms and rooftop have been conceived as a catalyst for change. Blackened steel elevator doors open to reveal the interior of the elevator cab, which features infinity glass a custom graphic that reveals itself to be composed of emojis.

The raw, industrial, found space of the main restaurant Cathédrale sets the scene for outrageously decadent feasts set in a subterranean enfilade. Rockwell Group conceived an environment inspired by the Fillmore East, Bill Graham’s legendary Lower East Side concert hall that featured the Doors, Janis Joplin, and Elton John and other influential rock musicians from the late 1960s to its closure in 1971. The design concept pays homage to the Fillmore East building because it is representational of so much of the East Village’s character: Iconic structures that have remained physically unchanged, but whose evolving programs have epitomized the city’s cultural pulse. The main dining room of the restaurant is a triple height space with layered plaster walls and major art moments. Rockwell Group invited Italian artist Edoardo Tresoldi to collaborate on a concept for an installation for the restaurant’s main dining room space. Tresoldi executed a floating metal mesh ceiling sculpture, titled Fillmore, to create a dialogue between the restaurant’s architecture. The restaurant’s outdoor dining patio has a retractable roof and feels like a hidden courtyard. The back wall features a copper framing system for planters, giving the space an indoor-outdoor feel. To enter the restaurant, guests descend a long metal stair that feels like a fire escape between two East Village buildings, with a brick and gold wall on one side and a concrete wall on the other. Marquee lighting announces the entrance to the restaurant bar, which balances posh details with raw concrete and patinaed layers, giving guests the sense that they are stepping back in time and part of New York history. A long, staggered bar circles around so that guests can view each other rather than the back bar. A canopy over the bar has a light screen and LED signs from famous East Village haunts.

Inspired the East Village’s punk music scene of the ‘70s and ‘80s, Rockwell Group gave the Alphabet Bar a moody, rebellious feel. A series of blue velvet drapes theatrically peel away to reveal the patina of the concrete walls and vintage mirrors spray painted by Apex with music lyrics. The bar die is made of reclaimed organ pipes with a blackened steel bar top. A ribbed glass back bar and industrial pendants wrapped in wire-mesh immerse guest in the time period. A fire-escape-like bridge leads to the lounge, providing views into other amenity spaces ready to be explored. The Alphabet Lounge features a communal seating cluster, swings, a feature skeeball lane, and a carpet that looks like the remnants of a street art installation. Pops of neon and pastels give way to a moodier, eclectic grab ‘n go area, evoking a transition in time. The Alphabet Café epitomizes this transformation: Combining and collaging old and modern woodcrafts, the classical side of the counter is made with blocks of solid wood, vertically placed, and carved by hand. These join a modern side made of veneered multilayer wood, for a mash-up of styles. In the lounge, an interactive iPad allows guests to create their own art and graffiti that is displayed in the adjacent alleyway. Two flexible studios can be partitioned off of the lounge for meetings or workspace or seamlessly unfold to become part of the lounge. A stairwell that features an abstract spray painted mural by the San Francisco-based artist Apex leads guests to Little Sister, a bar and lounge that references New York’s deep history, stretching back to agricultural heyday. The intimate space is hugged by a wood-clad barrel-vaulted ceiling. Strips of LEDs emphasize niches and the bar area, changing color to accommodate mood and events. Vintage light fixtures and long, jewel-toned banquettes add warmth. A dreamy, pastoral wallcovering hints at New York’s bucolic past. A stone bar has a copper bar die and a mirrored backbar, red velvet seating in the VIP area, and embossed leather accents add touches of unique luxury. The guestroom corridors and the rooms represent a period of transition, where new and old merge. The corridors have been conceived as an alluring, dark and mysterious path through a building reclaimed by nature in a radically new future. The charcoal-colored custom corridor carpet features urban hieroglyphs and gestural graphics—arrows, X’s, and dotted lines—in pops of green, yellow, pink, and blue, creating a map that guides the way into this new reality. The guestrooms have an eclectic, improvised look with an emphasis on materiality. Material scraps and fragments, such as pieces of glass with graffiti graphics, woven fabric made from seatbelts, and canvas upholstery help create a comfortable environment for today’s “neo-pioneers.” A peg wall holds the vanity sconces, shelves, and mirrors. A framed, open canopy bed features woven fabric and an embedded television, creating a room within a room. Each room features artwork by Xan Padrón, a Spanish photographer who resides in New York.