The Inframent: A Seismic Conversation

For the last century, mentions of "the sublime" and "religion" in literature about Yellowstone National Park have been declining. Meanwhile, visitors in Yellowstone primarily spend their time within built infrastructure, with only 2% of visitors leaving the roads and boardwalks. The perceived disconnect from the landscape diminishes visitor experience and inhibits understanding of the role of humans in ecological systems. By sonifying seismic data of specific locations in Yellowstone, the Inframent creates a sonic landscape that invites visitors to feel the sublime of Yellowstone. We draw from the eco-theological belief that human connection to the land requires both a scientific and spiritual understanding of our environment. While the park currently offers scientific education, the Inframent would be the first experience offering spiritual understanding of Yellowstone's ecologic and geologic systems.

The Inframent is a sound experience that invites Yellowstone National Park visitors to feel a connection to the vibrations of the caldera. Seismic sound instruments play abstracted land information that encourages visitors to contemplate their presence in the mysterious wild around them. Using a MATLAB script (courtesy of University of Utah geologist Jeff Moore), seismic miniSEED data is translated into sound files that speed up the infrasonic vibrations from the seismometers to an audible frequency. Data for the Inframent was accessed through the University of Utah seismometer network courtesy of Jamie Farrell and IRIS.gov.

The sound instrument is made of an oxidized steel shell that encases a bass shaker and amplifier. The Inframent's bass shaker vibrates the shell with the waves of seismic motion. The vibrations create audible sound that is broadcast to Yellowstone visitors, inviting them to experience the sound. The physical vibrations of the instrument also encourage visitors to touch the surface and feel the motion of the ground. Bone touchpoints close to the ears, like elbows, are ideal to hear and feel the vibrations as they move through the human body. Visitors can kneel next to the instrument with elbows placed on the surface or lie on the surface to feel the sound, moving from an upright position to one similar to religious prostration. The Inframent invites visitors to fall to the ground and feel a connection to the earth, where the sacred heartbeat vibrations originate.

A network of sound experiences could take place throughout the park. There are 32 seismometers in Yellowstone, each monitoring a specific area around the active caldera center. Each Inframent would be placed near a seismometer and produce a unique sound based on the local seismic activity. The Inframents would be installed in new locations every few months, providing an opportunity for crowd mitigation during months of high visitation. As a network, the Inframents produce an orchestra of seismic activity. 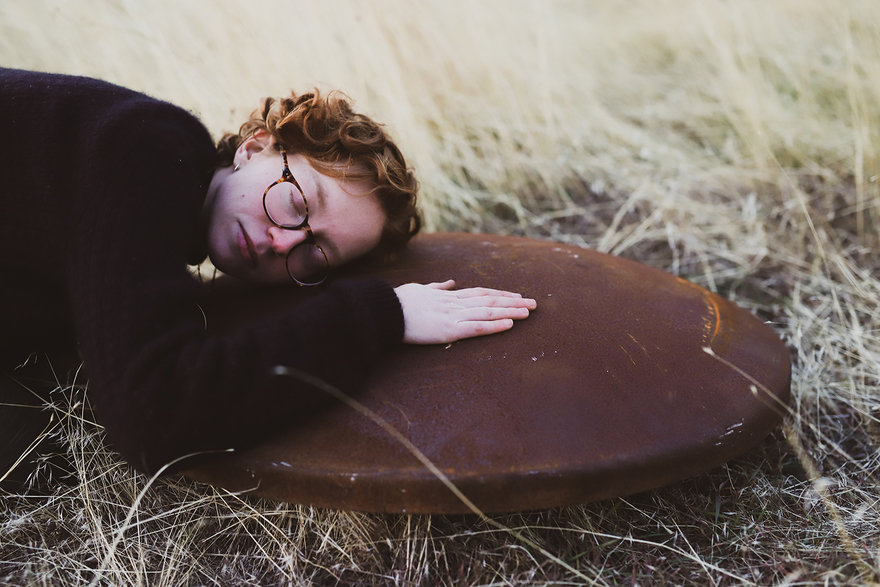 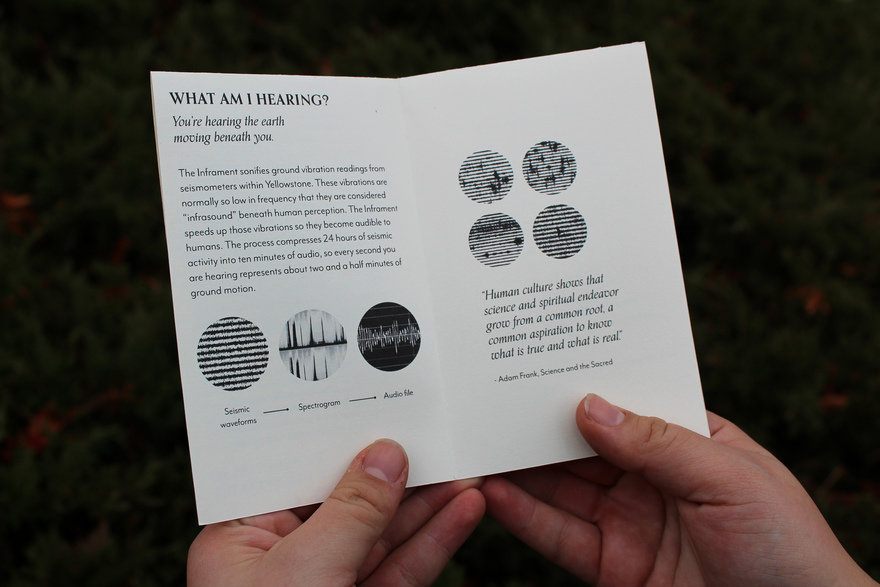 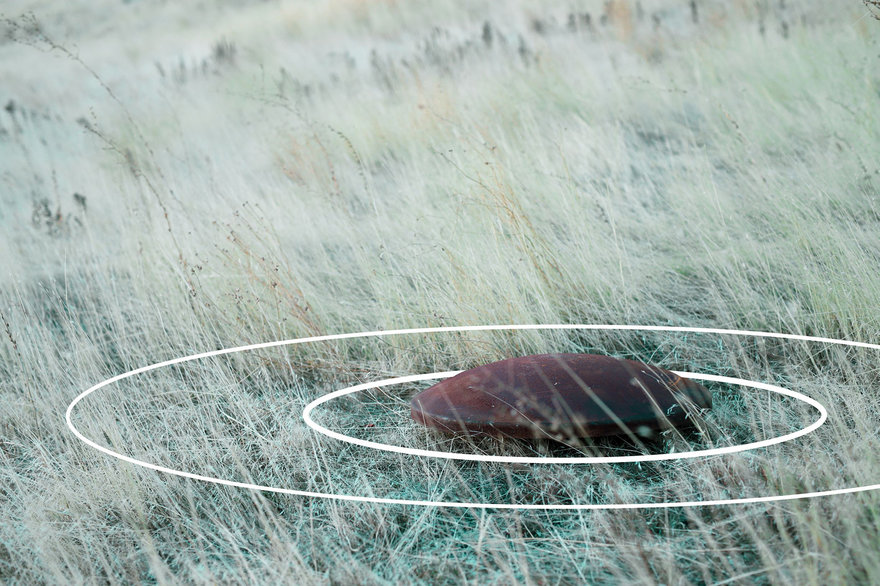 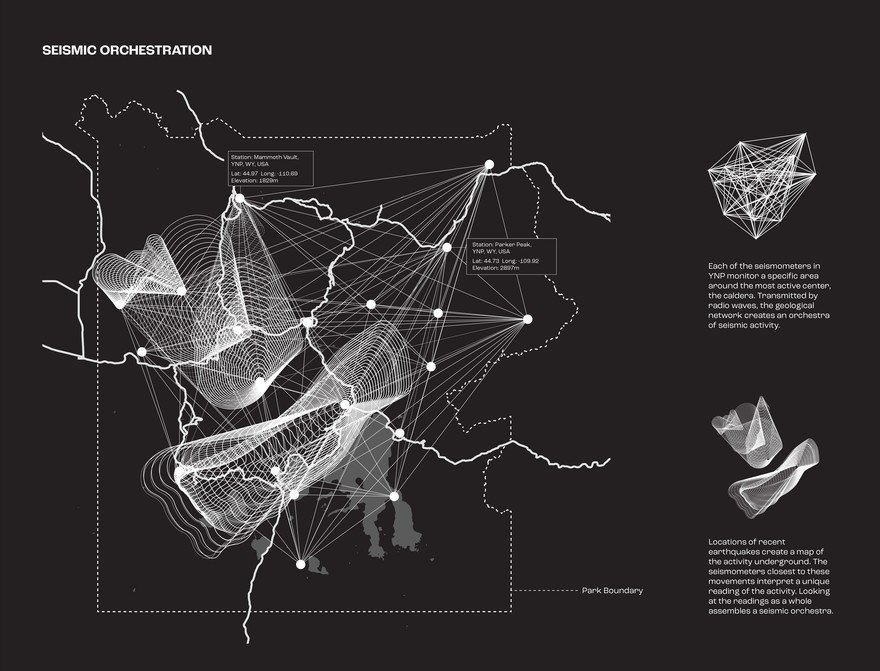 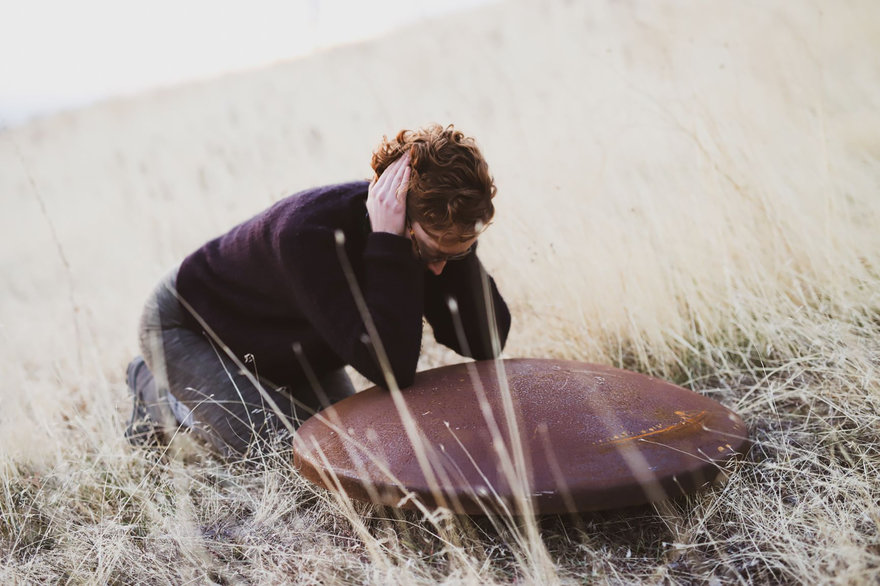 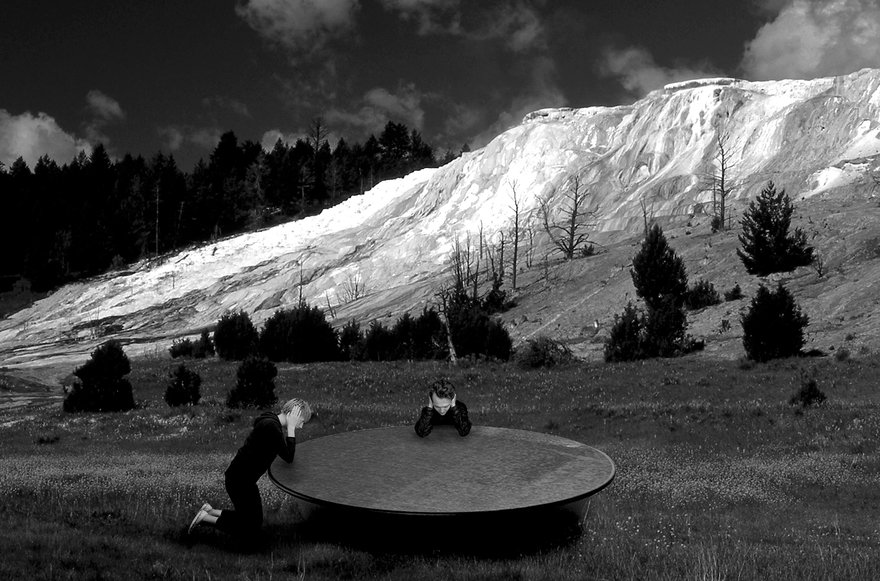 Change works slowly but constantly in geology. When we look at a striated canyon wall in the desert, we can see the multicolored strata clearly defined. Each layer of minerals and sediment is a period of time compressed and reformed throughout epochs. In Yellowstone National Park, the geologic history of the land is less visible, but no less present. Lava flow underground shapes and reshapes the plates above. Seismometers constantly stream out recordings of vibrations in the ground in the form of waves that narrow with stillness and bulge with activity. The vibrations are too slow to hear or feel, but they still shake our bodies imperceptibly. John O'Donohue, an Irish philosopher, believes that beauty in a landscape is much more than the physical forms of the land. It is the elemental rhythm of the place. What if park visitors could come into rhythm with the elemental in Yellowstone?

Conversations with Experts and Users

We began the design process by observing visitor behavior in Yellowstone National Park. While mapping visitor paths at one busy location in the park, we noticed that some visitors would start walking down a trail away from the crowds, but then they would turn back when they realized the trail simply led into the woods and not to the hot springs boardwalk.

Later, we learned from visitor interviews that visitors dislike crowds, but just put up with them. They believe that the park experience has to include crowds if they want to see the natural wonders. However, this is not necessarily the case. There are more than 900 miles of trails in the 2.2 million-acre park, yet according to naturalists employed by Yellowstone Forever (our "client" as students), only 2% of visitors leave the roads and boardwalks. There is a disconnect between a majority of the visitors and a majority of the park.

We came back from Yellowstone believing we had come across an issue facing many national parks and wilderness areas today: as visitation rises, the subsequent increase in infrastructure separates visitors from the ecosystem. How do we ensure that those visitors are actually connecting with the landscape, rather than passively observing the famous features?

Yellowstone's indigenous populations lived and still live as a necessary component of the ecosystem, relying on the land for survival but also changing the land to benefit their survival. Further, ecological research shows that social systems exist within ecosystems and are dependent on them. The National Park system, however, seeks to protect the landscape by separating humans from interaction with the land. We believe this creates a barrier for visitor connection with the land. With a foundation in the eco-theological idea that science education requires an emotional or spiritual component, we sought to break down the barrier between visitors and land through spirituality.

Research into pilgrimage and ritual gave us an opportunity to integrate spirituality into the park. According to Alan Morinis, pilgrimage sites are sacred spaces to which people travel that embody cultural ideals. Lynn Ross-Bryant frames national park visitation as pilgrimage, informed by collective myths and upheld by ritual actions. In Yellowstone, the myths tell a story of a natural world that is separate from human interaction. We wondered whether a new kind of ritual in the park could change the myths about Yellowstone. Based upon this research, we introduced a ritual for Yellowstone in which visitors interact with seismic data from the land.

Soon after, we heard about a geologist on our campus who had been researching the vibrations of sandstone arches by sonifying their ambient resonance. We knocked on his door to ask about his work. He joked about his accidental foray into the art world, but he seemed to feel comfortable with the idea of spirituality in science. He offered to lend us the MATLAB script his grad students wrote to translate the frequency and amplitude of seismic waves into sound waves, and gave us the name of a geologist with access to Yellowstone seismic data. With this information, we began designing an installation that sonifies data collected from the seismometer network in Yellowstone.

One of our goals was creating a memorable, sensory experience. The geologists told us that it's hard for people at geology outreach events to make the connection between sound and seismic activity. Not content with just sound, we looked into making the seismic motion tactile. We played the sounds through bone transducers, which send the vibrations through the user's bones to make the seismic motion a tactile experience. We explored shapes and materials to understand how the vibrations travel and resonate. We tested bone transducers and bass shakers, as well as various styles of audio editing for the low-frequency vibrations.

Before we had a final instrument, we hosted a seismic experience to test the sounds. We played the low-frequency seismic sounds through a subwoofer outside our building one night, laid out blankets, and invited our coworkers and professors. Our focus this time was on mystery and awe, rather than scientific understanding. We worked to create a setting in which listeners felt they were on the edge of some deeper truth about the world.

We analyzed visitor segments and case study locations to determine the parameters for experience. We borrowed the segmentation of user groups from a published survey about Yellowstone visitation, as well as the activities each group was most likely to participate in. Then we used the segmentation and activities to predict the reactions of visitors around the sound instrument. This showed us which user groups were most likely to have a spiritual experience, which were the user groups we designed towards for the rest of the project.

There are 32 seismometers distributed throughout the park, each measuring different seismic activity. This provides the opportunity for placing sound instruments throughout the park, each near a seismometer and playing a sound unique to that area. This method of placement highlights the little-known seismological network in Yellowstone and creates a new kind of park infrastructure: an orchestra of seismic activity. We chose two seismometer locations to analyze as case studies and mapped the user experience around those two locations. We superimposed the sound dispersal of the instruments, the actions of the users, the positive and negative emotions of the users, and the topographical information.

With this project, we suggest that mystery can be a benefit to scientific education. Vibrations coming from the land may not be completely understood at first, but they spark curiosity about the way the land moves. A sensory, embodied experience of geology leads to a deeper, longer-lasting understanding of geologic functions in the park. The Inframent also provides visitors with a way to interact with the park beyond reading scientific information or taking in visual stimuli.

Beyond its context in Yellowstone, the Inframent seeks to reframe our connection to the land. There are more ways to understand the land than the scientific method. The Inframent shifts users from a Western scientific understanding of landscape to a more bodily, spiritual understanding of landscape. However, science and spirituality does not have to be a dichotomy. Professor of astrophysics Adam Frank writes, "Human culture shows that science and spiritual endeavor grow from a common root, a common aspiration to know what is true and what is real." The Inframent tests the possibility of blending modern science, like the collection and global transfer of seismic data, with spirituality.