The Canopy is an interactive environment that invites its visitors to power their own experience with bike-driven generators. As participants pedal they inflate, deflate, illuminate, and darken a neon-colored grove of tree-like sculptures between them. These sculptures are never still, instead their contours change continuously with the momentum of the bikers and can only be maximally revealed when everyone races together. The heart of the installation is the excitement held between the participants that is then reflected back to them by the sculpture in a feedback loop of exuberance. Canopy is the first collaboration between the inflatable art & architecture collaborative Pneuhaus and the bicycle-based experience design company Can-duit. 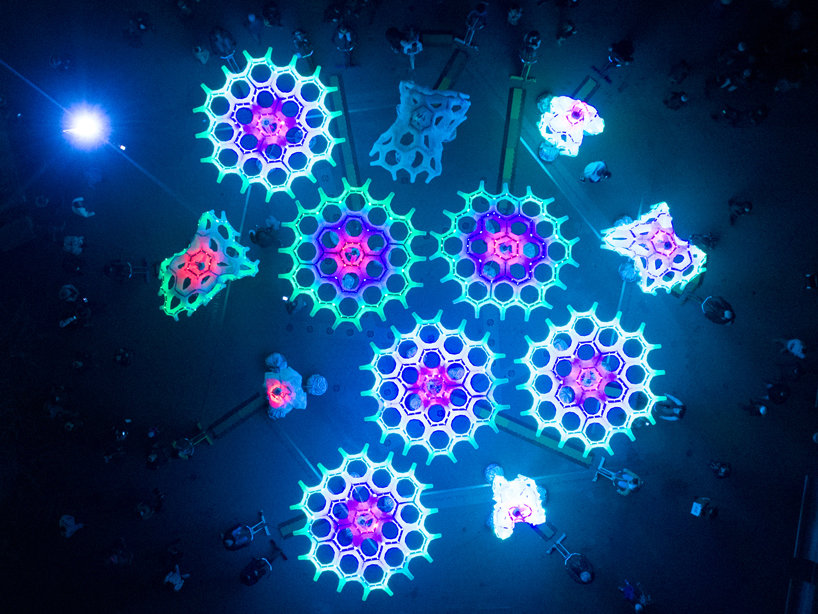 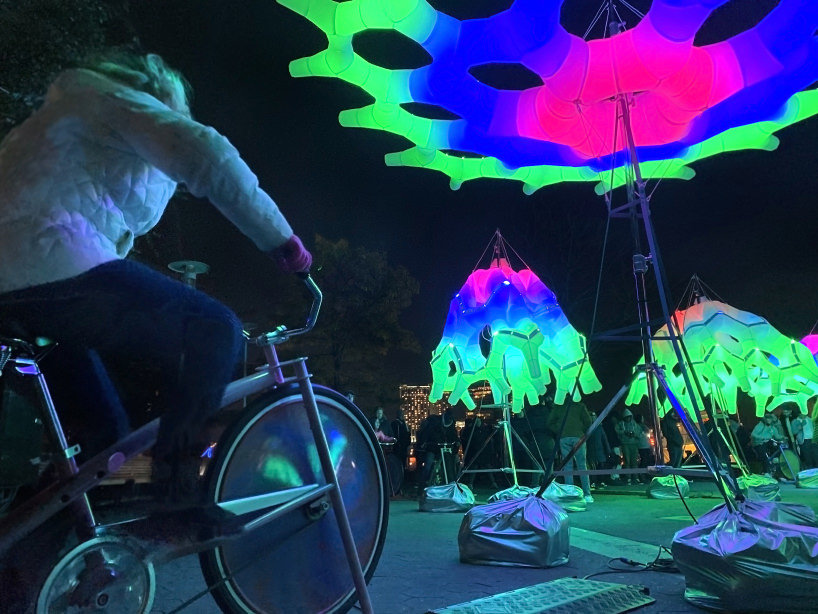 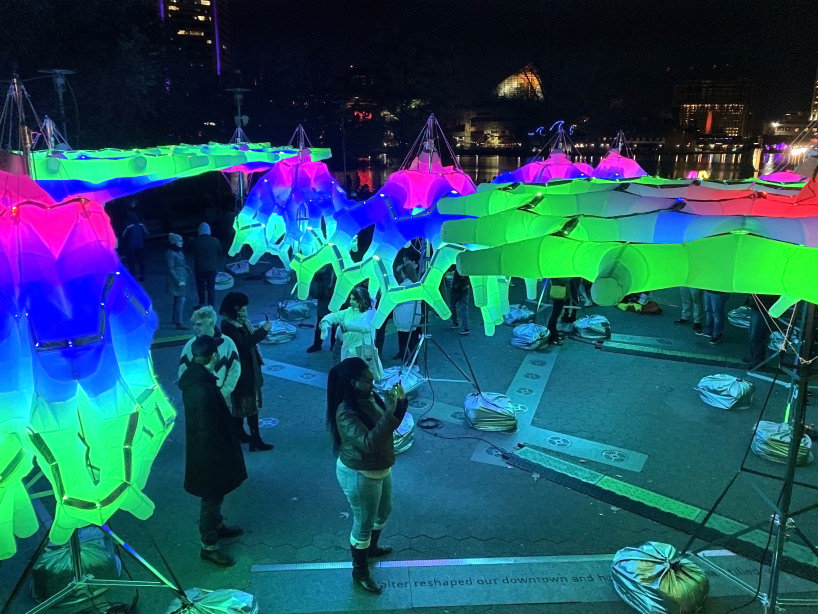 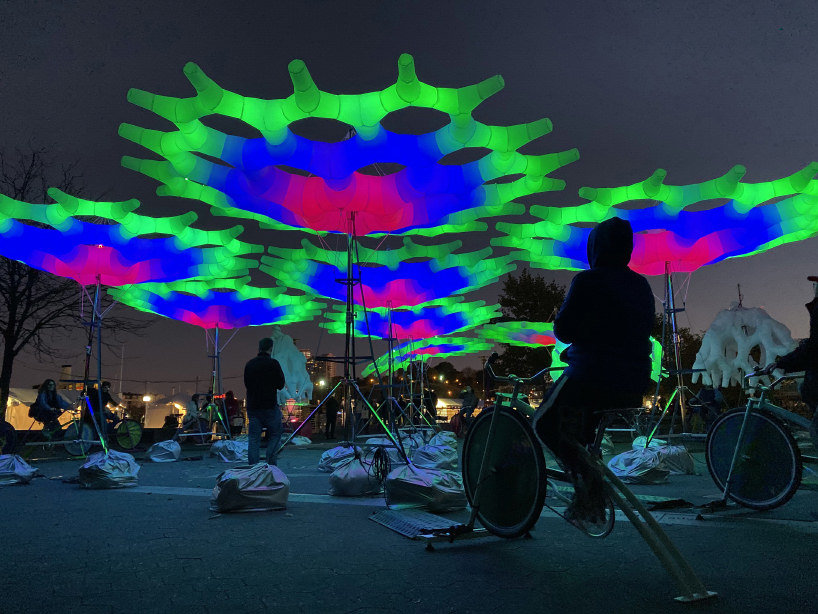 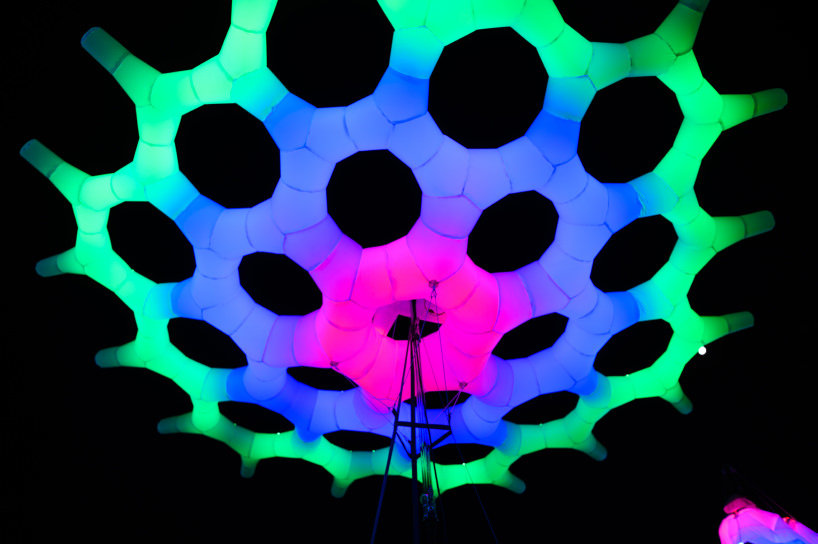 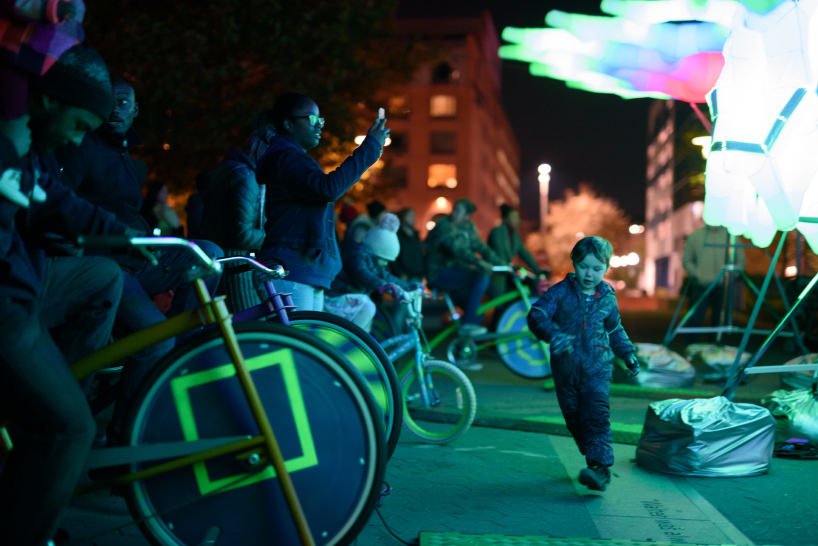 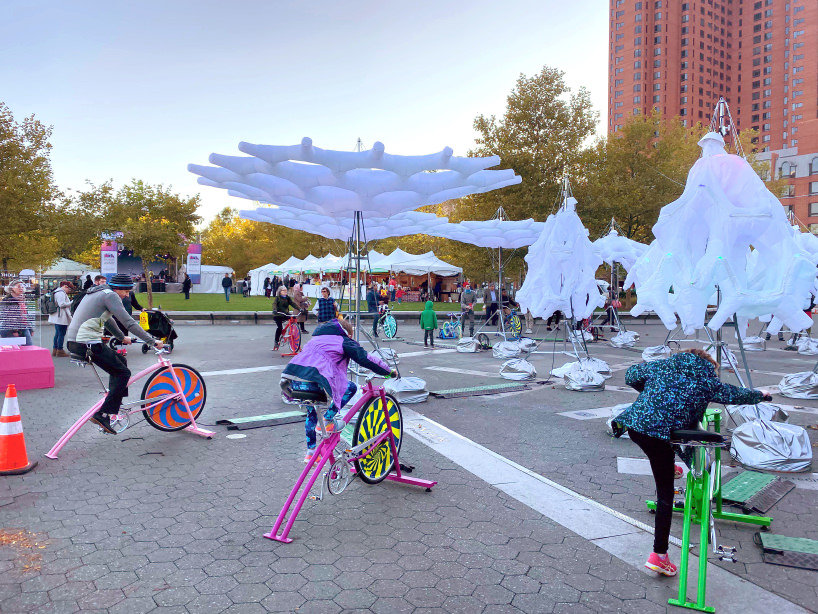 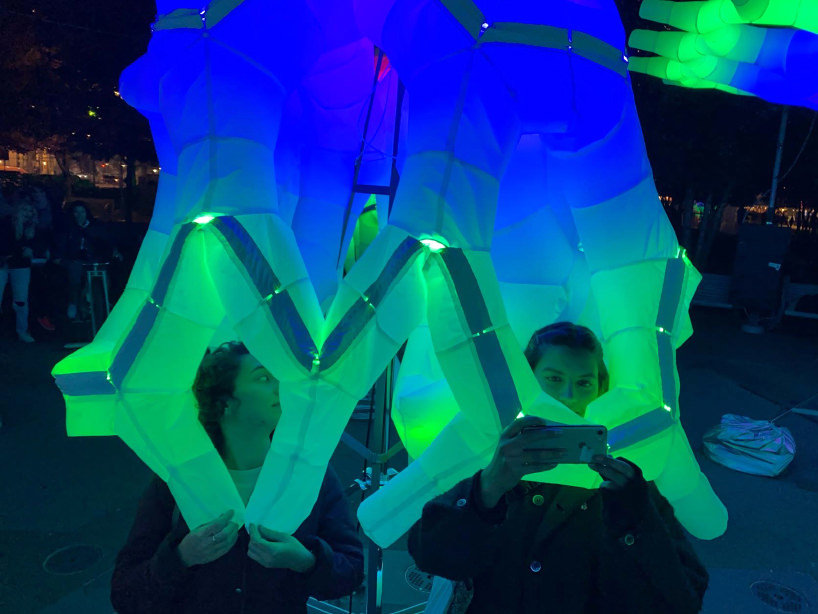 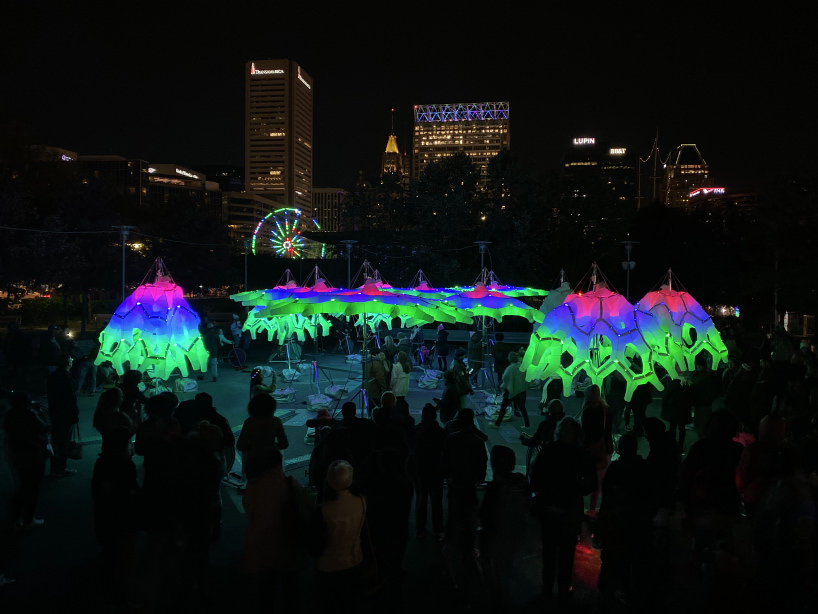 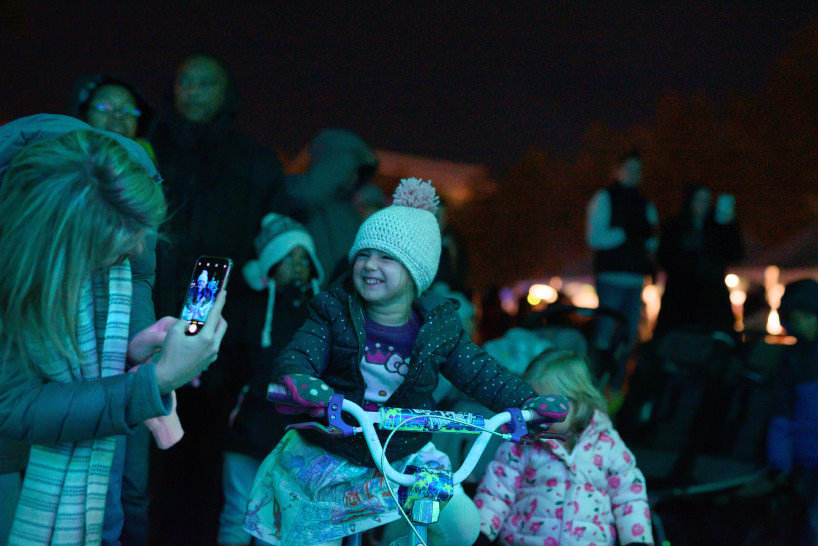 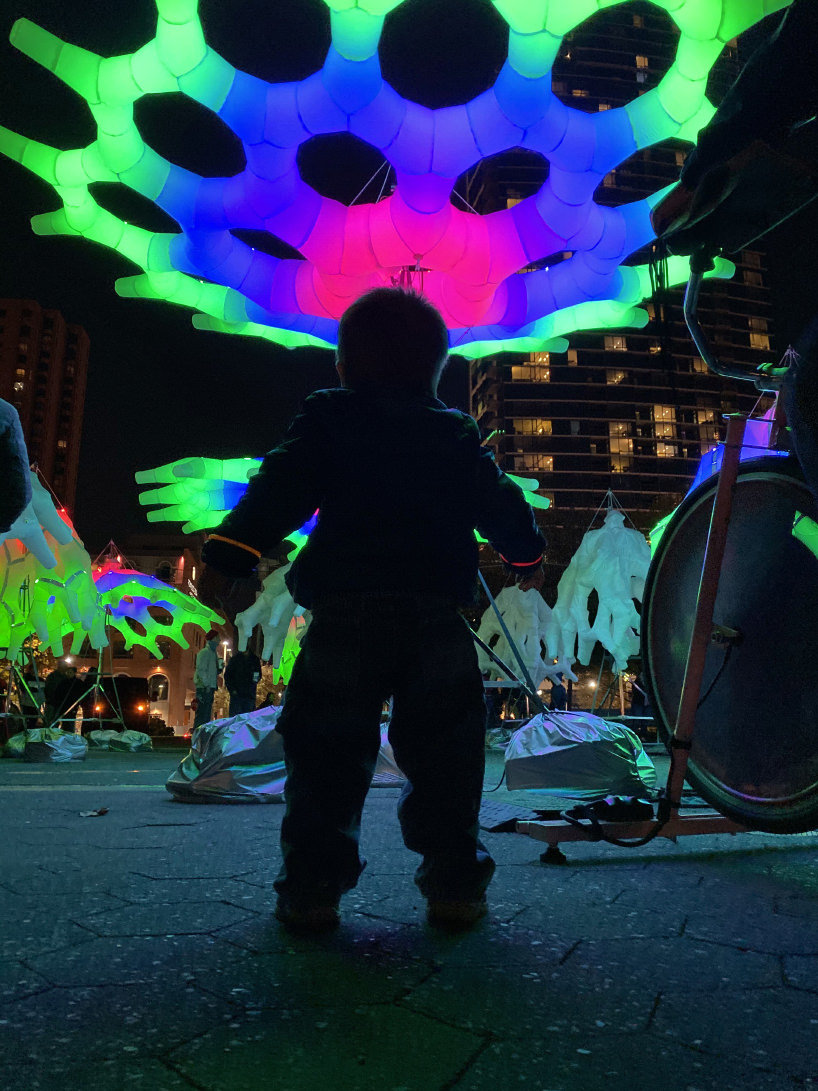 Inspired by 'Crown Shyness', a phenomena wherein a grove of trees grows together to create a continuous canopy while never overcrowding, the individual sculptural pieces of Canopy reach together at full inflation to create a luminous net of color that stretches over both bikers and onlookers. Canopy instigates a collaborative process of place-making, in enacting the image of a stand of trees the piece places ecological vitality in parallel to social and artistic vibrancy. Some of the canopies are powered by not one but two bicycles, emphasizing collaboration while also incorporating smaller bicycles for children. This mirrors a healthy grove where trees of all ages share energy and nutrients and the vitality of the individuals is made possible through that of the group.

Canopy empowers its visitors by giving them a first hand experience of green electricity generation. As they pedal and see their effort monumentally transformed into color and movement, inviting them to be amazed with themselves. We hope that this piece can inspire an excitement for sustainability that its visitors can carry into their lives and the cities they call home as they work towards environmental renewal within their communities.

Each canopy is made of flexible, light-passing white nylon and holds eighty feet of LEDs. As they fill and release air they spin slowly on their stands like the skirts of a dancer. In daylight the canopies are white and reflect the ambient colors of the sky and site as they mix subtly with the colors projected by the LEDs within. In the sun the bright hues and geometric patterns of the custom-made bicycles pop in the sun. At night the red, blue, and green of the LEDs within the canopies becomes incredibly vivid as they emit a beacon-like glow encompassing the installation with festive light.

Canopy is fundamentally interactive. We wanted to create an installation that would bring event goers into collaboration with us and, more importantly, one another. The conversation that led to the piece began with the bicycle generators, and every other design decision from the form to the movement of the canopies was made to best reach the potential of the biking interaction and the variable power it generates. The bicycles are arranged in an inward facing circle around the grove. Riders are often accompanied by onlookers who are moved to cheering which attracts more passersby into the glow to investigate. Some people choose to pass between the bikes exploring the space within the grove on foot. They play with the soft sculptures as they pass close to the ground, take photos within the dreamlike backdrop, and stand close to the bases allowing the canopies to open and close around them. The interactions Canopy invites foreground joyous collaboration, and overlays human community with ecological community through the image of trees and its core of green power.