Antrum is the spatio-graphical interactive installation. The installation looks like a grotto of the membrane, the surface of which is inhabited by strange creatures. It's complex structure causes association with living creatures, space objects and architectural constructions.
In this frontier word pure mathematical abstractions are mixed with natural shapes, resulting in formation of new entities. Viewers can push the membrane and try to contact with them. 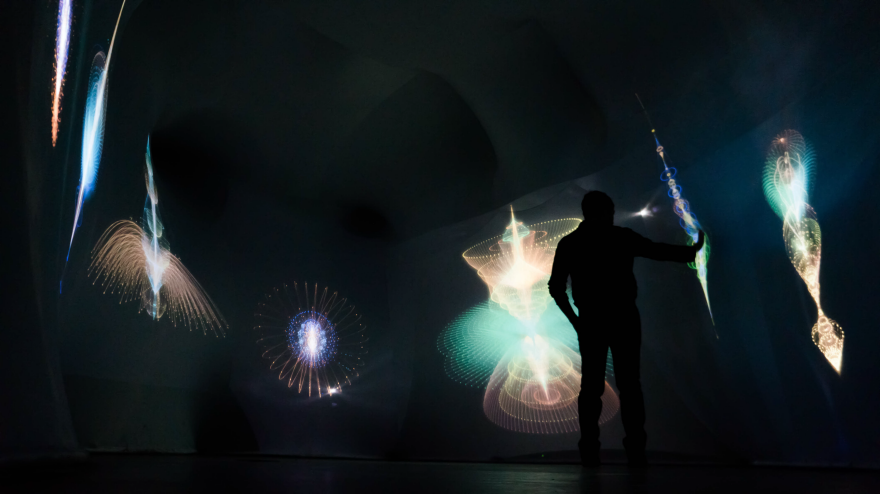 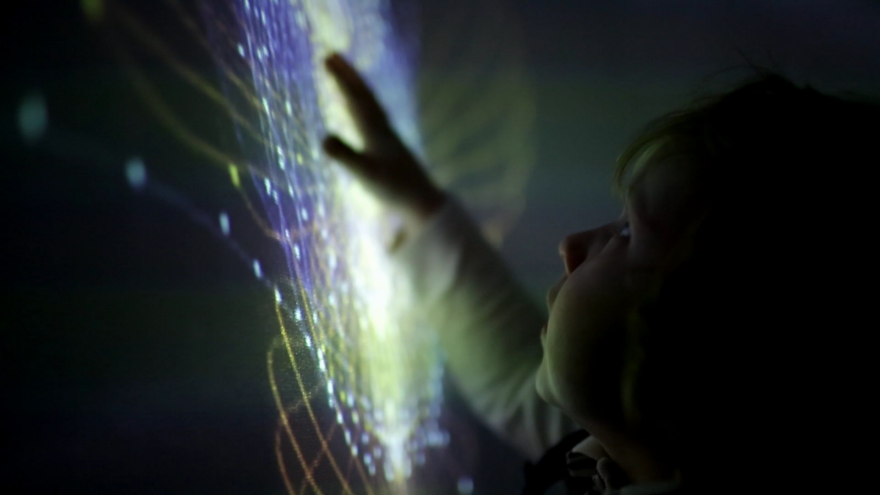 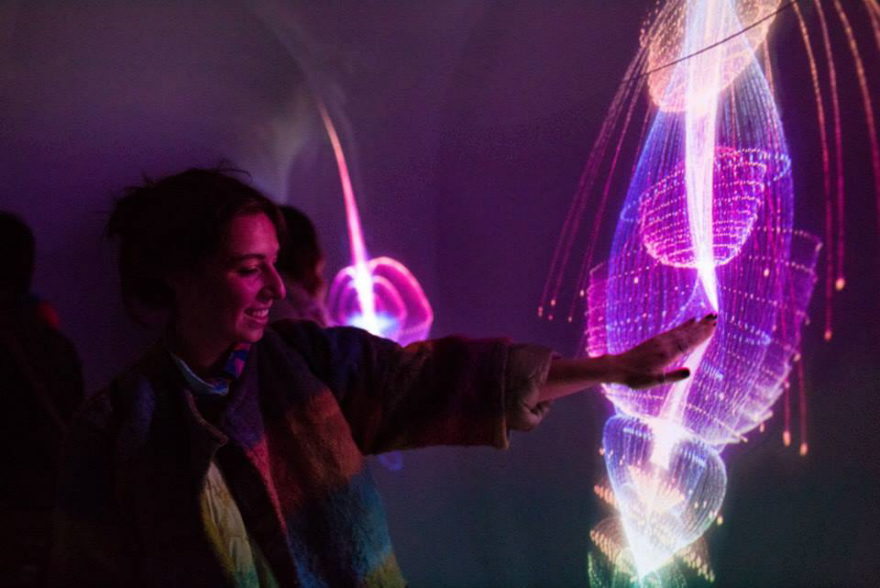 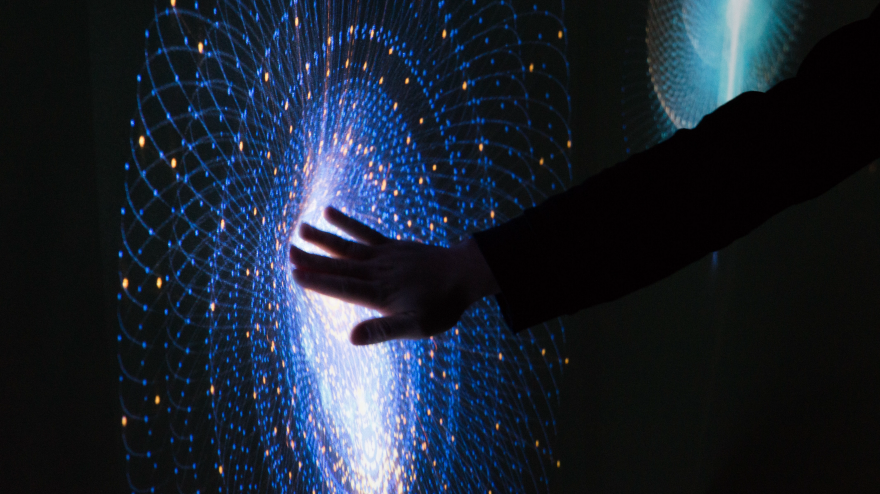 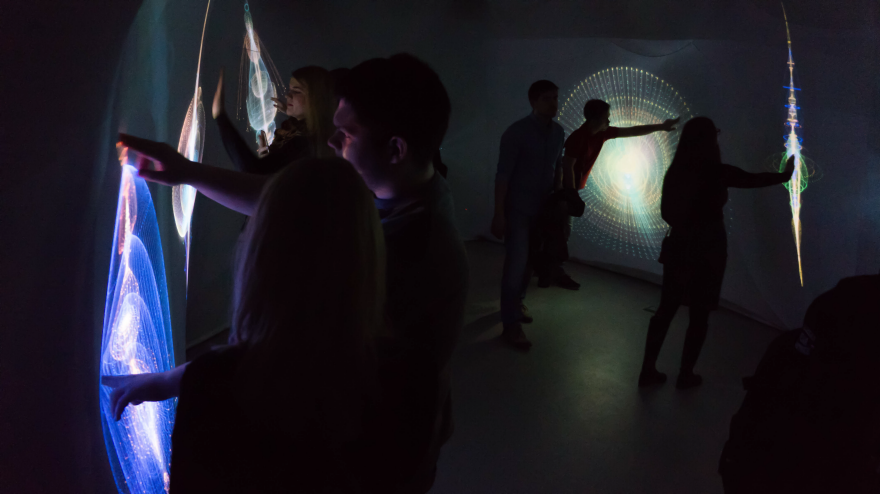 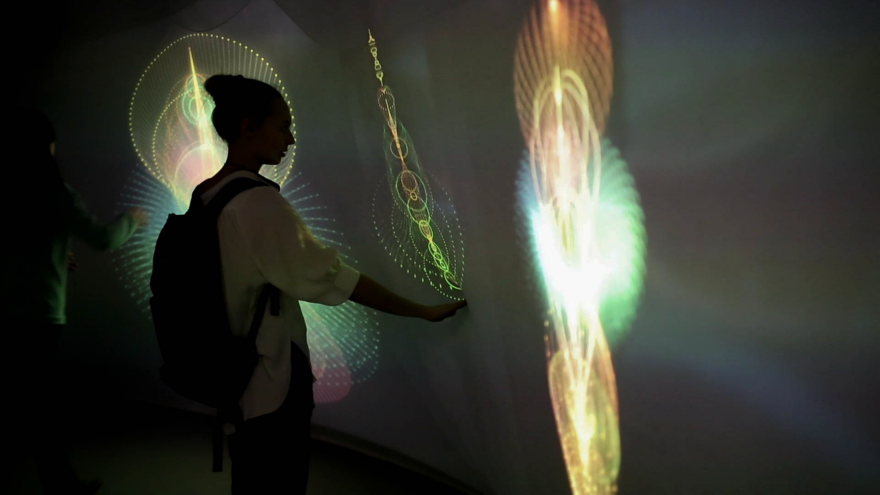 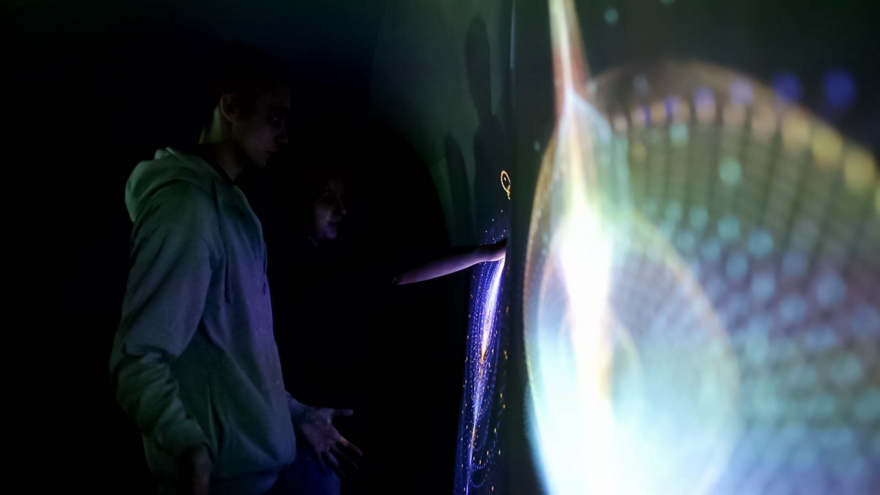 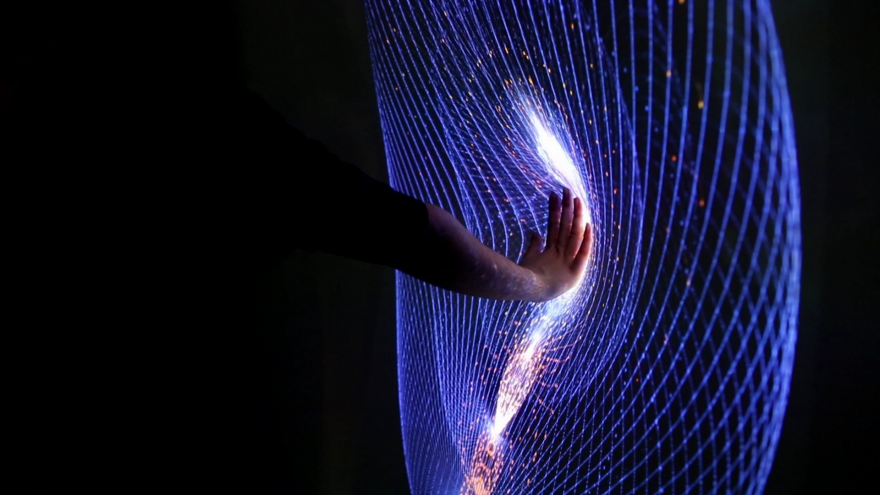 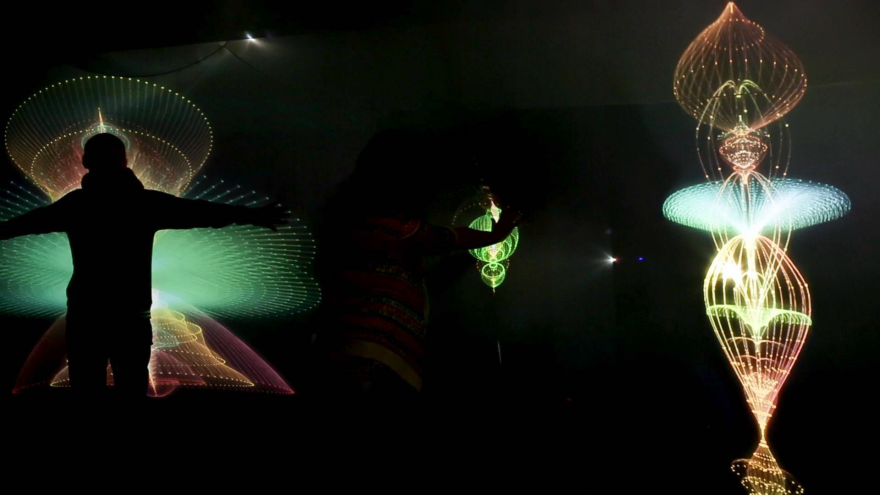 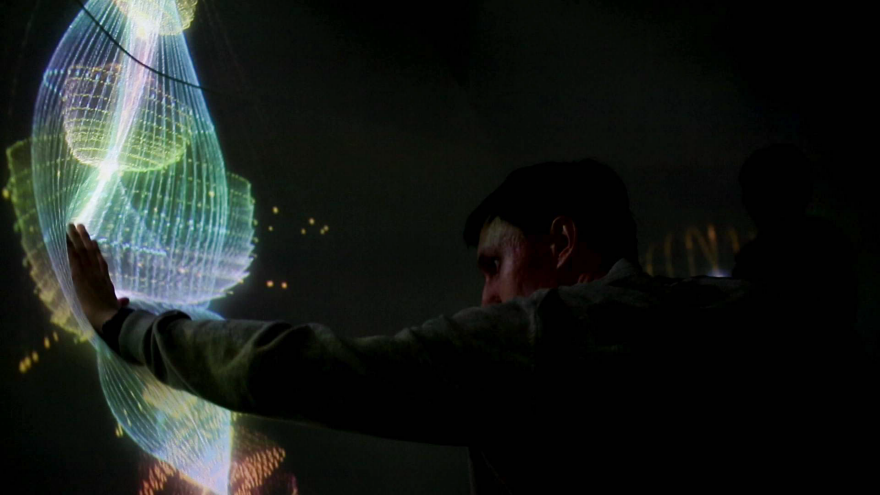 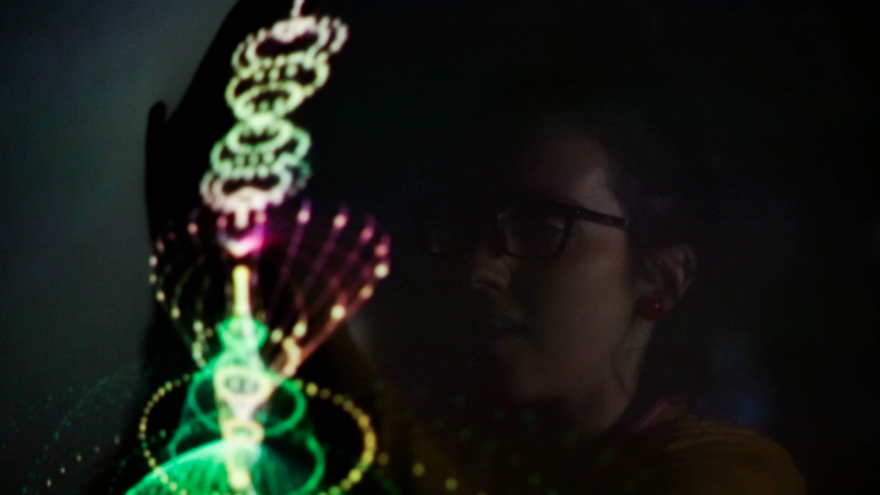 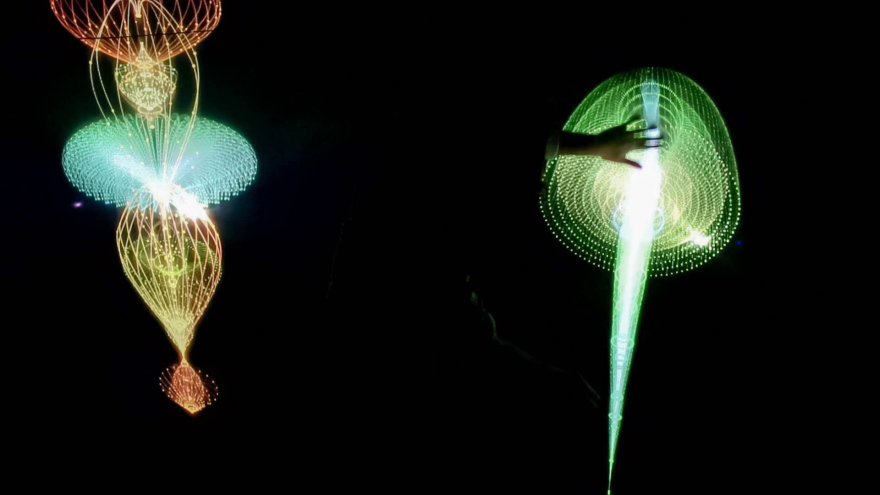 Antrum is a three-dimensional graphic installation. The whole installation is executed as a grotto having its shell made from a tense membrane on the surface of which exist strange creatures and their complicated structure is the allusion to life forms, cosmic and architectural objects. It is a frontier world where pure mathematical abstractions are mixed with forms of nature thus creating new creatures. A visitor may come into contact with these creatures by touching the membrane.

The purpose of the installation is to create an immersive space where images, shapes, materials and sounds surround visitors making them feel the entirety of the space around them and evoke sensation of the other world.

Creatures existing on the walls of the membrane are the result of combining human emotional expression with mathematical aspect.

To incarnate the creatures Tatiana Plakhova created an abundance of flat graphical prototypes. By studying them a team of installation authors was trying to get the idea how to transform these two-dimensional static images into movable living creatures. The task was to create new living forms – unique creatures dissimilar to any known living form. The creatures were supposed to represent several worlds: the world of living natural systems, the world of cosmic objects and the world of pure mathematical abstractions.

To implement the idea Vadim Smakhtin and Eduard Haiman created software using vvvv comprised of animated algorithms and visualizing engine. With the help of the software it became possible by using the prepared 2D curves to make 3D objects that may alter and mutate. Thus Tatyana Plakhova got the possibility to design and adjust the objects herself and this in turn helped to directly join the independence of creativity and art and rigidity of digital code. Using the software Tatiana Plakhova created an abundance of digital prototypes.

Along with creation of visual objects were designed the images and shapes of spaces where the creatures may "exist". After more than a year of experiments there appeared a possibility to arrange a large-scale installation in an art-gallery Mar's. On the assumption of the specificity of the space a concept of a soft cave (*antrum - (Latin) cave, grotto as well as threshold) was built up and the concept as well as the creation of digital creatures was based on mathematical laws.

Stretching surface of membrane was specially designed so that the physical properties of its materials were similar to those of mathematical minimal surfaces. At the same time the tension of the membrane will help visitors who decided to touch the membrane to interact with the creatures projected on it. The membrane is a pavilion made from biflex fabric stretched inside a room.

Parametric model of the membrane was created with the use of Rhino+Grasshopper program. This model allowed to calculate the parameters of the shapes taking into account tension of fabric, placement of projectors, properties of projection areas and rolling out of material with allowance made for the width of a fabric. This approach allowed Eduard Haiman and Elena Zhdanova to create the installation and made the membrane just within a period of one month.

Ultrasonic distance sensors that with the use of Arduino module transmit data to vvvv patch were used to pick up the data received after a visitor touching the membrane. Each creature supposed to respond to touching in its own unique manner.

Only 8 creatures among more than 40 ones were selected for final exposition. Each of the eight creatures has its own type of responding to touching. Thus was created a family of similar but at the same time differing by shape and type of response creatures.

4-channel generative sound was created and employed by Sergey Kasich with the help of Pure Data. Consequently when a visitor touches the membrane it responds to it not only in the form of visual effects but also by variety of sounds.

The whole process of assembling took 5 days, 2 of them were needed to assemble the membrane (Sergey Balta and volunteers gave a helping hand) and 3 other days were spent adjusting the sensors and tuning the sounds.

Using technology to be more interesting. It allows the fabric to interact with the video. Using the sense of touch to modify the sense of visualization.

It uses technology to design for the future with less of a footprint.