The rise of digital technology has brought a lot of positives to our society, revolutionizing all industries and bringing humanity closer together than ever before. However, the acceleration in which new services are being developed has drastically outpaced our ability to grow with them. Nowadays, digital media surrounds us everywhere and has found its way into all age-groups. With the first generation that has lived with smartphones most of their live now being young adults, we can start to see the downsides. The premature exposure to adult content online such as news casts, violence and sex, is causing fear, frustration, confusion and depression in children and forcing them to grow up too fast.

We have found, that a majority of parents agree that kids should not own a smartphone at young age. However, to allow them to be more independent, parents want to get a hold of their kids easily. Lacking alternatives, the smartphone seems an obvious choice. With PlayPal, we aimed to develop a device that connects children with their parents and introduces technology in a less intrusive way and enhances their everyday, real life experiences.

PlayPal consists of a main unit that primarily serves as a communication device with parents and other kids. Secondly, it offers several playful modules that allow for either solo exploration or fun games with friends. Thirdly, the PlayPal app aims to share experiences between kids and their parents and ease them into the handling of digital devices in company. 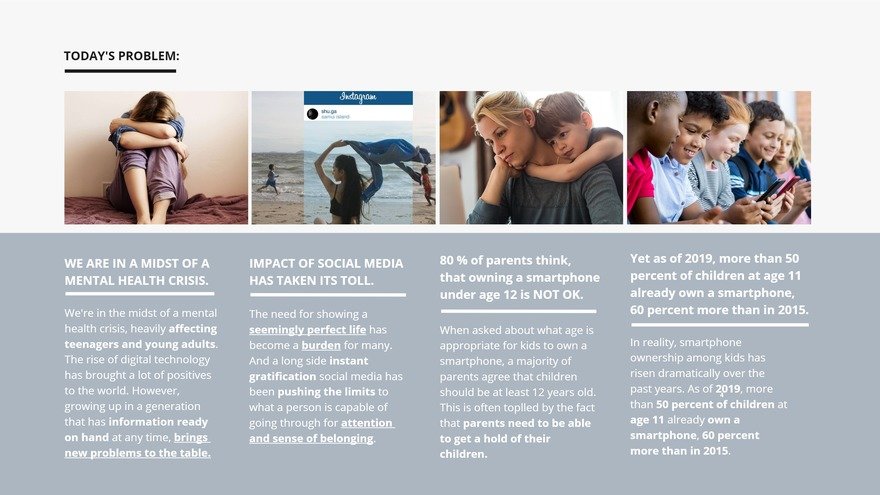 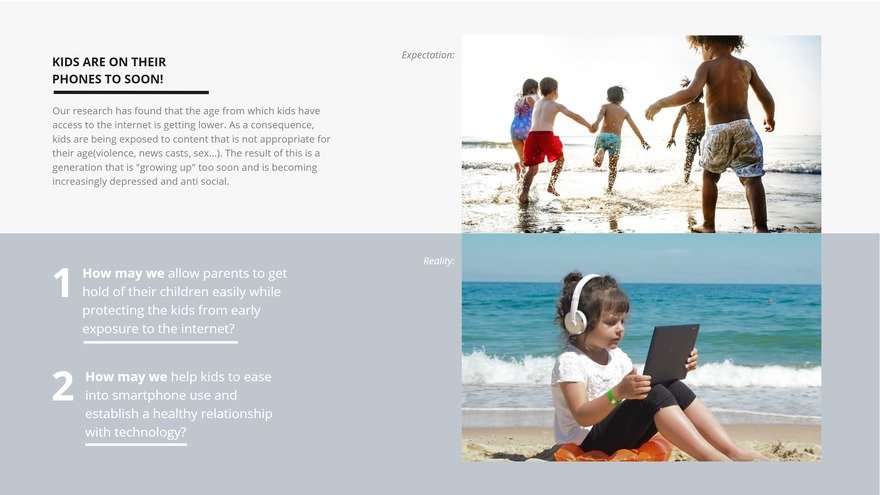 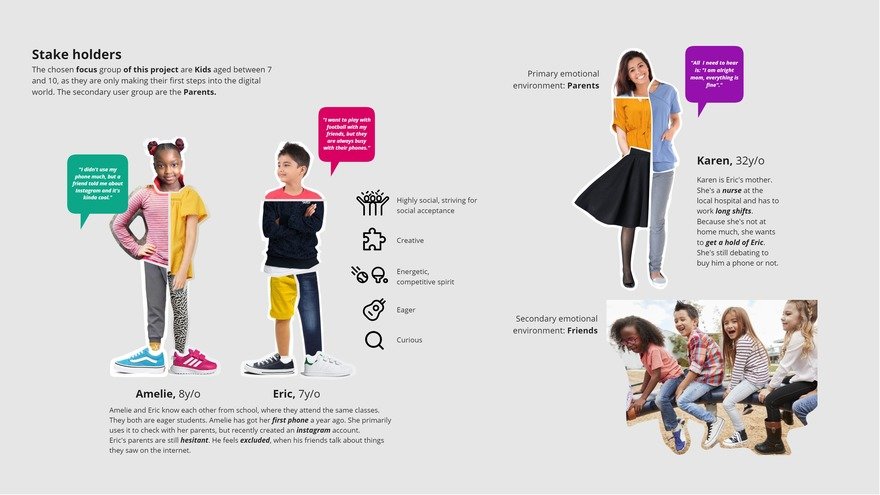 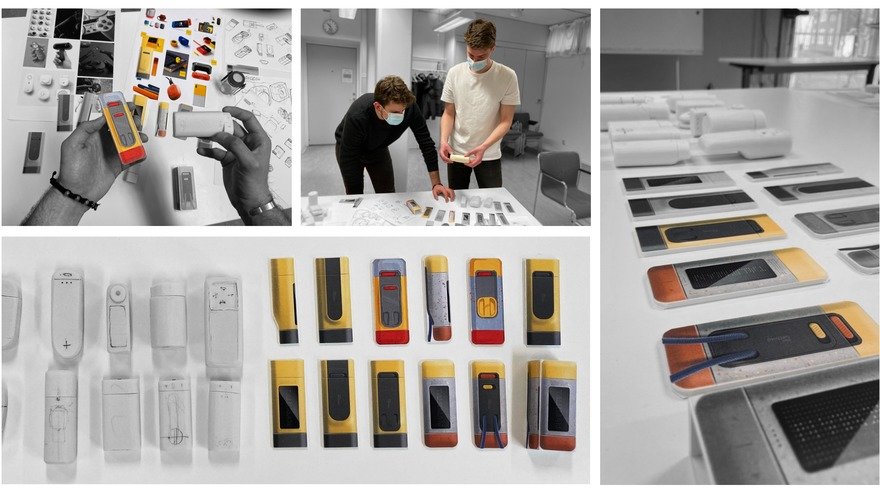 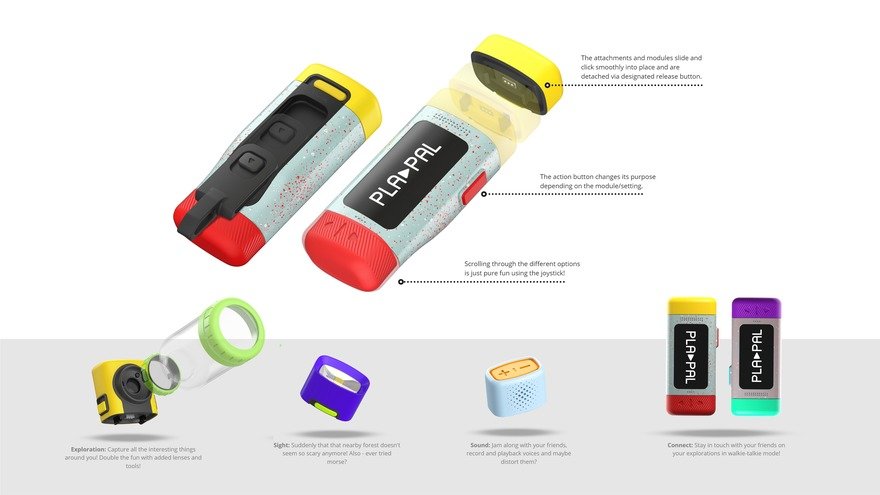 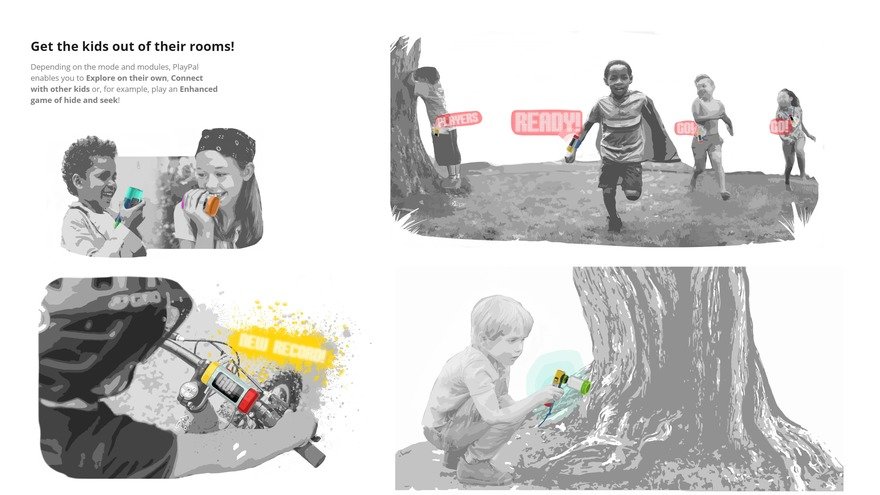 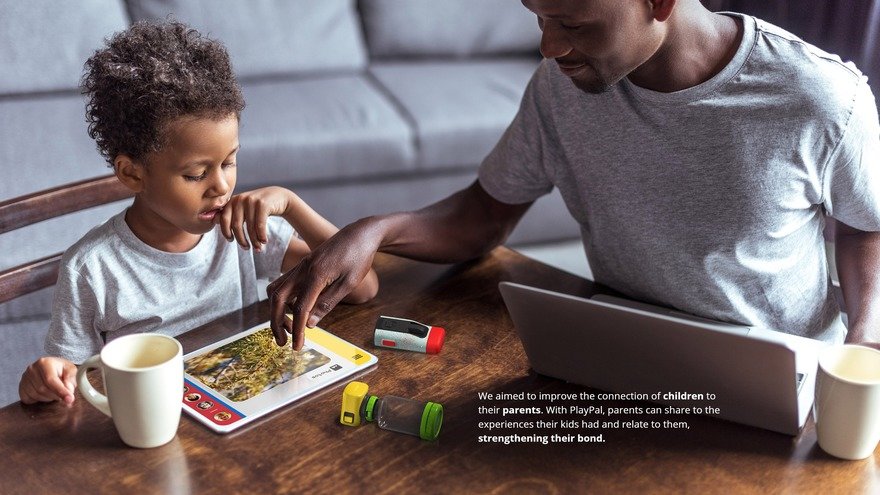 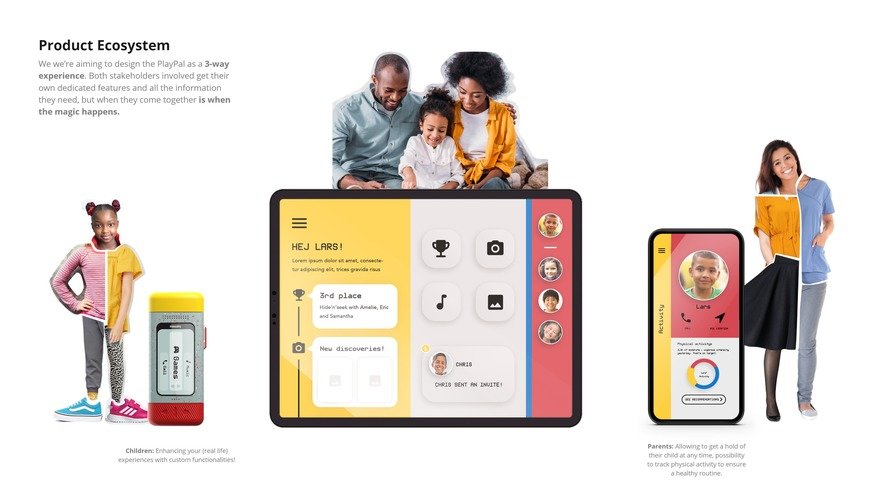 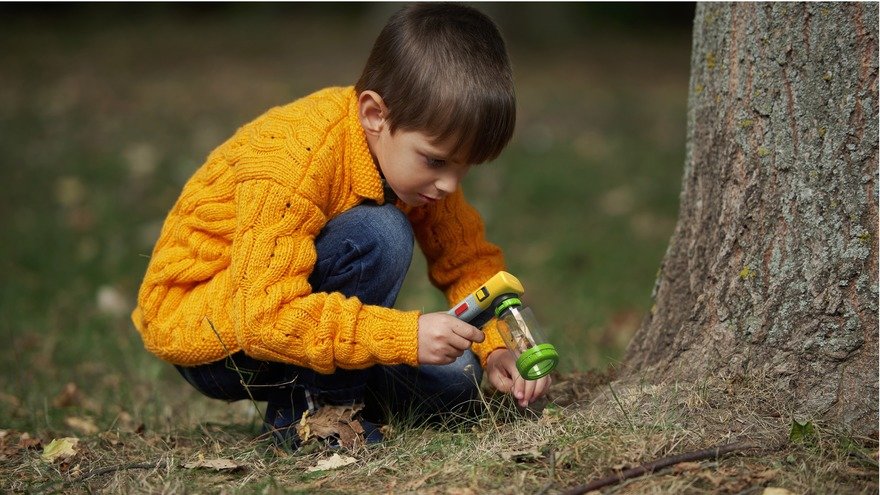 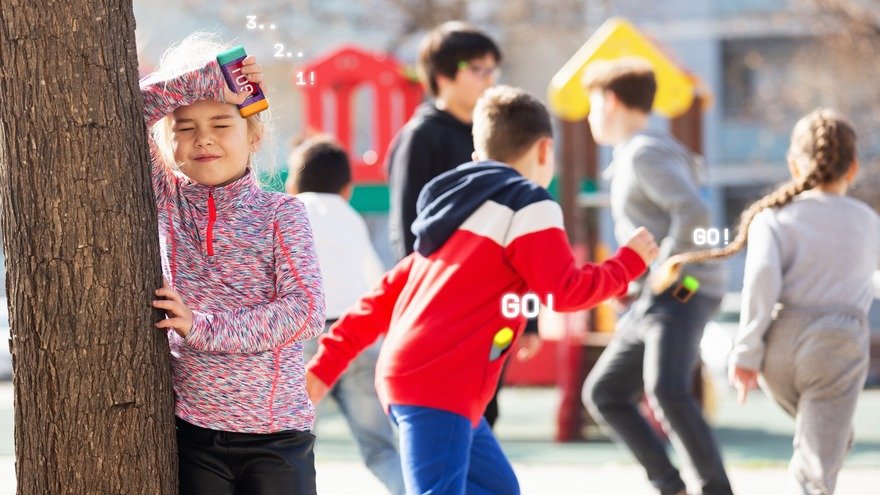 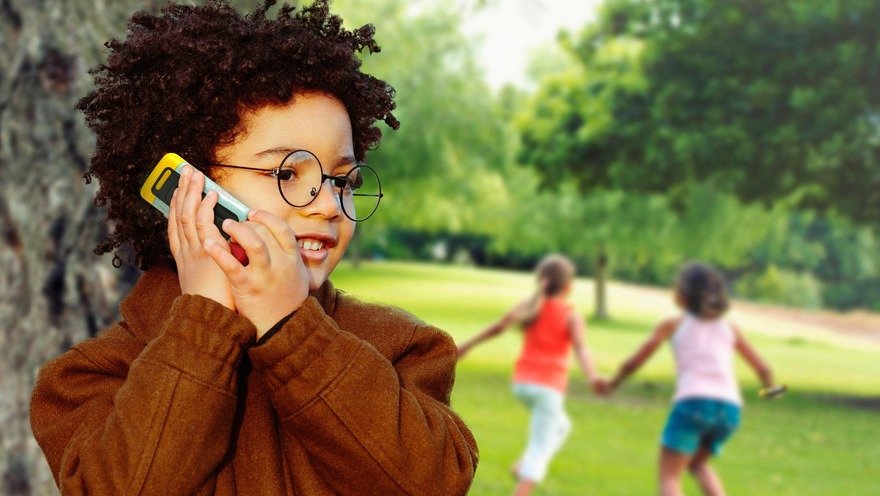 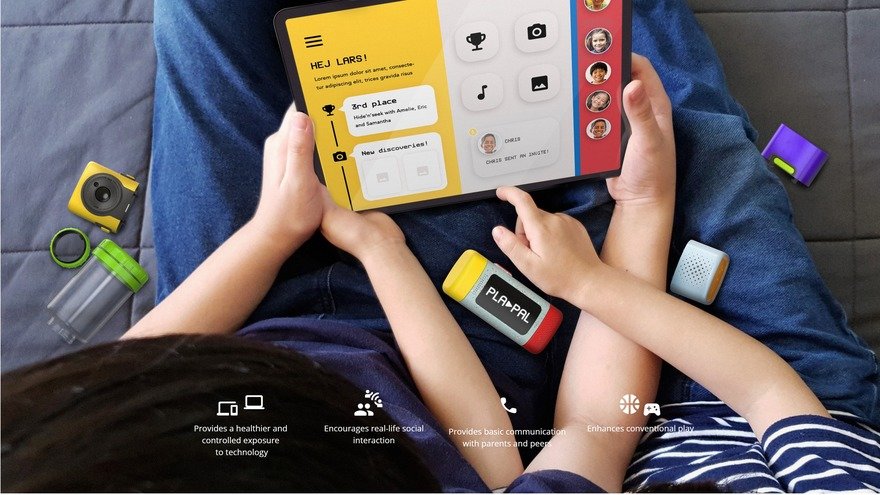 We're in the midst of a mental health crisis, heavily affecting teenagers and young adults. „You can search for what Lady Gaga is doing at any moment, but you can also search for how to use a gun" says Madi Hammond on her TED-talk „Living as Gen Z: From Fear to Positive Change". For us, this sums up the ambivalence of internet use for kids and teenagers. It has the strength to connect, spark creation and share, but bad news are usually just two clicks away. In largely uncontrolled environments such as social media, exposure to content not fit for that age can and will happen on a regular basis. Furthermore, the need to show a seemingly perfect life on social media has become a burden for many. And alongside instant gratification, we are pushing the limits to what a person is capable of going through for attention and sense of belonging.

Research has found that the age from which kids have access to the internet is getting younger every year. In order to fully understand that phenomenon however, we cannot only look at the kids, but also their parents. As the major stakeholder, they are ultimately the ones to make purchasing decisions. When asked about what age is appropriate for kids to own a smartphone, the majority of parents agree that kids should be at least 12 years old. Only just more than 20 percent of parents think, that owning a smartphone under the age 12 is OK. Subsequently, that age-group should show only very little online activity. In reality however, smartphone ownership among kids has risen dramatically over the past years. As of 2019, more than 50 percent of children at age 11 already own a smartphone, 60 percent more than in 2015.

So why do parents decide to give a smartphone to their kids at such young age? In a survey from 2016, 90 percent of parents answered the reason for getting their kids wireless service is to get a hold of them easily. This has been confirmed in our personal research time and time again. But we also must not forget the peer pressure among kids to have a smartphone. Also, digital media offers an easy way for parents to keep their kids busy, a factor we cannot underestimate.

Smartphones have changed the way we live and interact with each other, mostly for the better. Yet we believe, some usage patterns have to change in order to protect the youngest members of our society. This has lead us to think about the questions: How may we allow parents to get a hold of their children easily while protecting the kids from too early exposure to the internet? And how may we help kids to ease into smartphone use and establish a healthy relationship with technology? The latter is here to stay. However, we believe we can offer a more healthy way for kids to stay connected, while encouraging them to go outside and explore the world.

All of these thoughts we have channelled into the idea of PlayPal: A telecommunication device designed for kids. PlayPal enables parents to reach out to their kids if needed, but aims to motivate kids to go outside and explore, and connect with others of the same age.

The main feature is the use of modules, to personalize the experience of the Playpal. These modules can also be traded among friends or used in collaboration to create an even greater experience when bringing more than one Playpal to the party. How about, for example the SoundBox, to jam along with your friends, record and playback voices and maybe distort them? A flashlight, to guide you on your adventures through the neighborhood? Or perhaps a camera, to capture all the interesting stuff around you?

But Playpal isn't just about the solo-adventures. We want to get the kids out of the basement and connect with each other. Modern Video games offer a lot of details that kids love, like multiple layers in gameplay and scoreboards. Kids love to compete. Thus with Playpal, we tried to make physical playing more interesting again. Think about for example a Hide and seek 2.0, with a limited area to play in, that shrinks to make the game more intense and shares information on who survived the longest undetected. Or bike racing with custom tracks around the neighborhood and a leaderboard with all your friends, that you can compete in. We want kids to be more active off screen again, but all of that with the peace of mind to be able to reach out for your kids - and vice versa - at any time.

But also the kids-parents interaction was of consideration. Playpal is designed to offer a three-way experience. Both stakeholders involved get their own dedicated features and all the information they need when they are on their own, but when they come together the the magic happens. Imagine the following scenario: Lars has been strolling the neighbourhood and found an interesting plant and took some photos of it. Lars does not own a phone or tablet yet, but he later wants to check them out on his Dad's iPad, where the details really come to life! Luckily, his Dad also knows quite a bit about plants, and had some interesting facts ready about the one Lars found. Good thing he didn't try to eat those leaves!

With PlayPal we can allow kids to be independent but also create touch-points with their parents. Here they can relive and reflect on the experiences the child had during the day - together - while on-boarding them to the digital world and how to maneuver it.

The kids of today will create the society of tomorrow. As a consequence, their well-being should be our number one priority. Unfortunately, often enough they are left out of consideration when shaping products. With this project, we want to create a safe environment for kids to grow up in and develop a sustainable handling of technology.

Connecting kids among each other and with their parents - and all that without the threat of uncontrolled exposure to the internet. This is Playpal.