Wiggel is a flexible play system that uses silicone joints to create wiggly and bouncy structures and shapes. The flexibility introduces an element of problem solving and structural planning to make shapes that will stand on their own. Whereas other construction systems can be played with alone, Wiggel benefits more from collaborative play, where more hands and minds can make the ideation and building of complex structures easier. The system also includes modules that allow a new way to engage playfully with the environment by attaching to surfaces and furniture.

The modular toy/construction set market is largely dominated by systems with rigid parts (usually plastic or wood). A common, intuitive goal for systems such as Lego, K'nex, and Tinker Toys is to build something recognizable; a house, a rocket ship, a tower, a car, a boat, etc. The rigidity of the parts affords predictability in assembly and handling. How could a non-rigid, flexible system challenge that play mode? What skills can be learned from having to focus on structural integrity and constantly building against gravity? Suppose that direction is abandoned entirely in favor of something eccentric, unpredictable, and downright silly–what sort of play-goals or educational prompts/outcomes could be derived from such a system?

Wiggel's unique flexibility provides an opportunity to explore the concepts of weight, stability, structural integrity, shock absorption, tension, expansion, and compression. Its versatility sparked the imagination of playtest participants, and they were often fully engaged in figuring out the rules and function of the system on their own. One participant worked slowly and methodically through her play-learning and despite getting stumped a few times she later expressed how much fun she had working through the challenge. Another group of participants enjoyed the potential of what imaginative things you could make with it, expressing that "your imagination chooses what it is!"

The Wiggel system offers a challenge to the usual modes of constructive open play. It introduces lessons on structural stability, compression, and tension, while also having an element of unexpected kinetic charm. It benefits greatly from collaboration of multiple hands and creative minds. 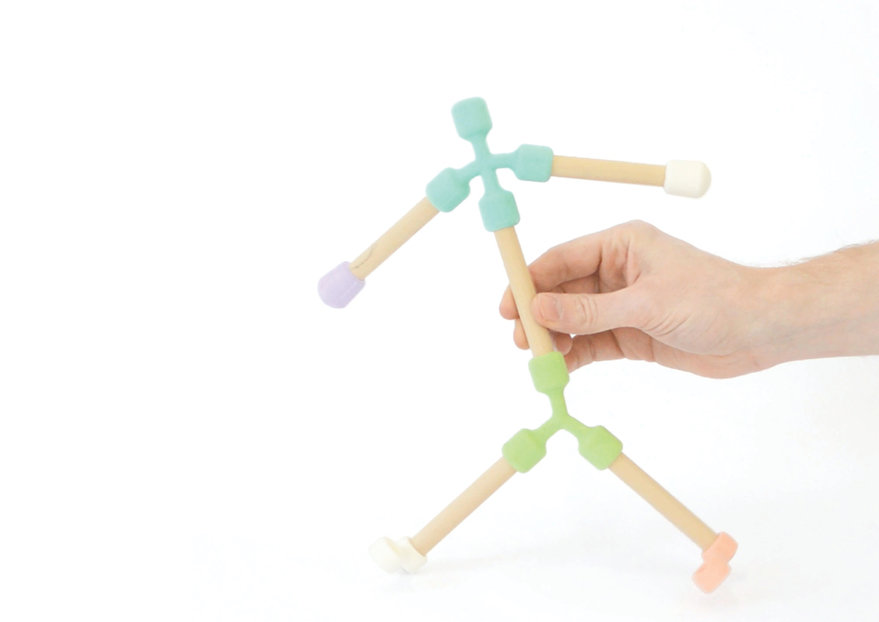 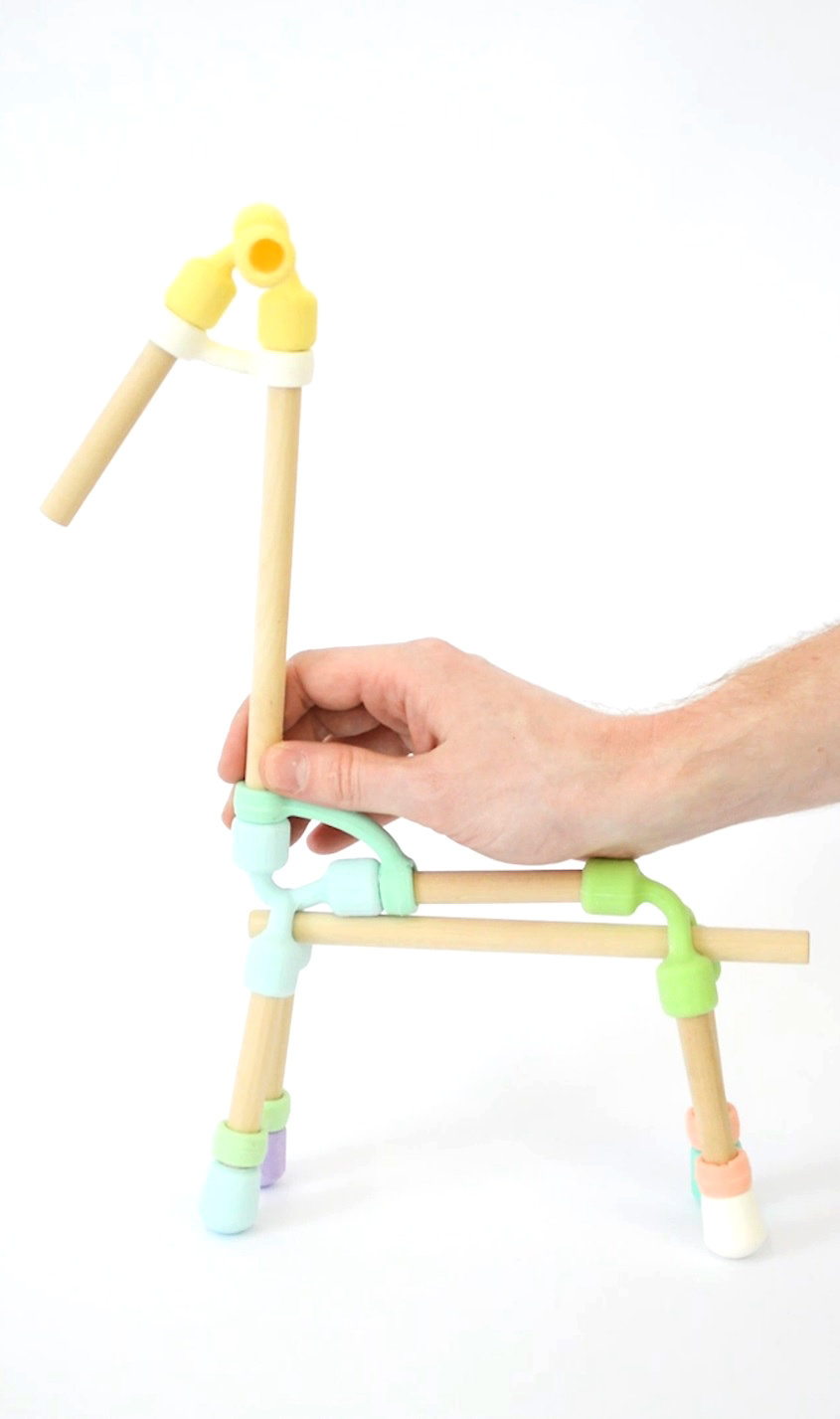 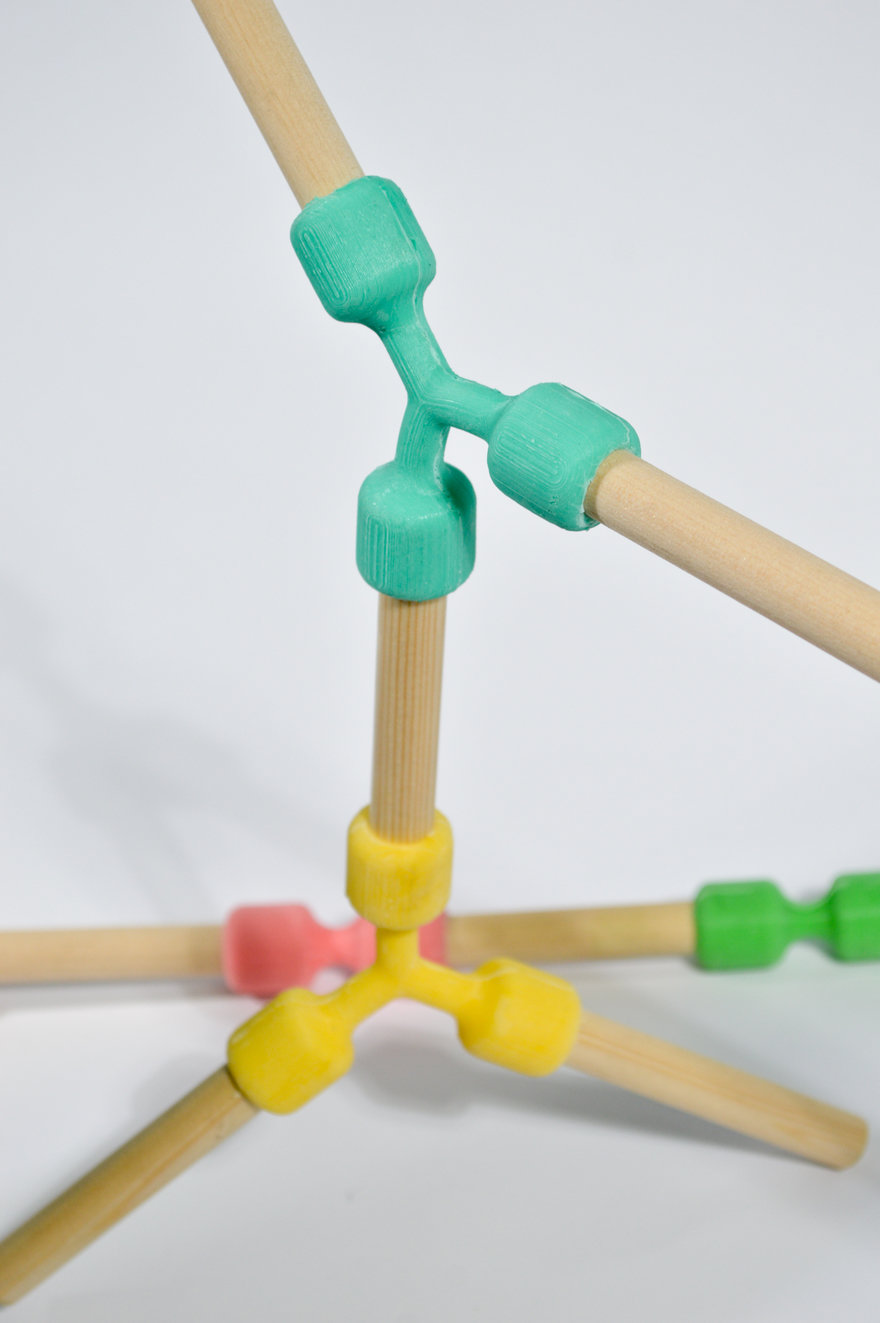 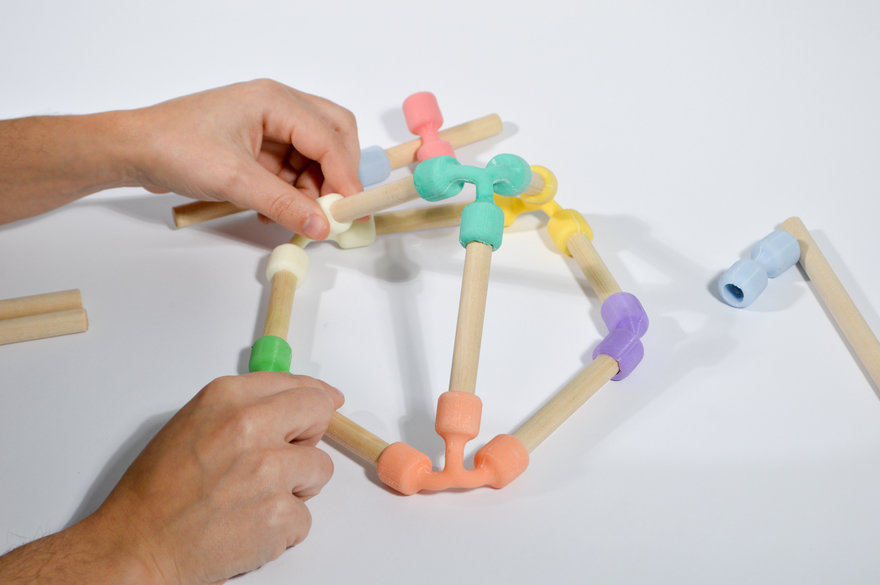 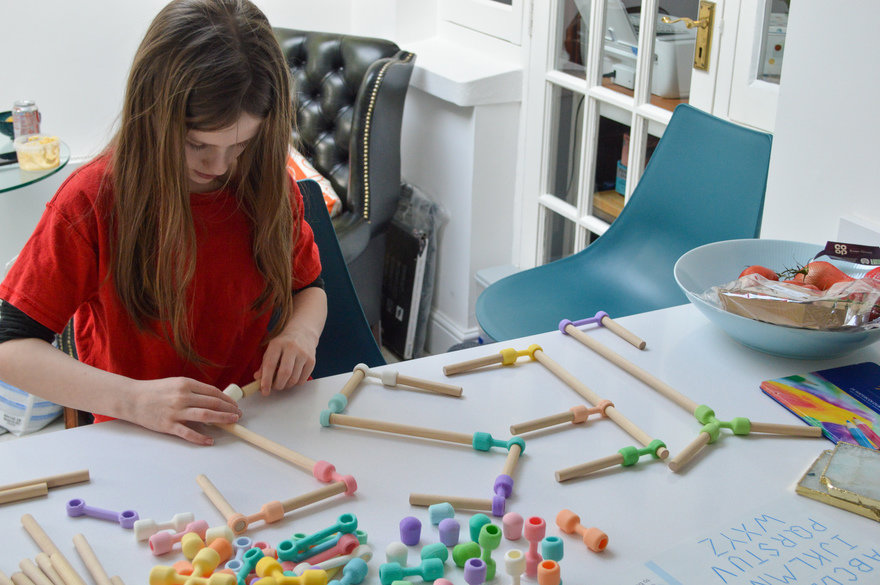 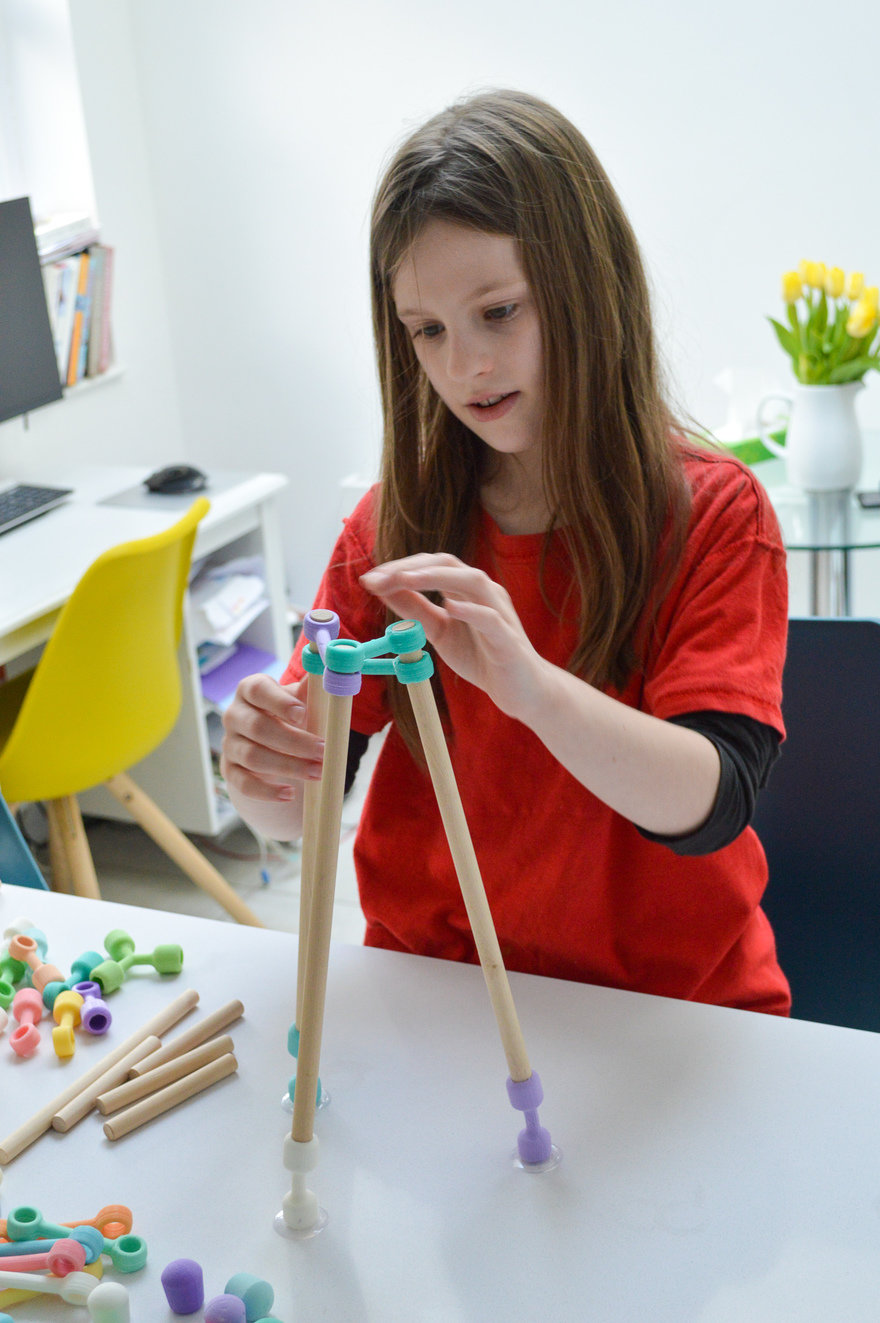 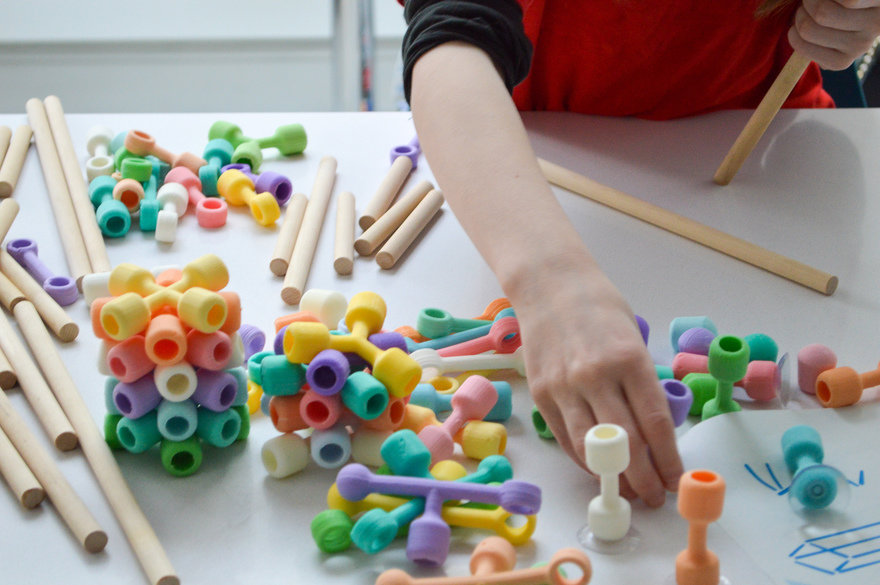 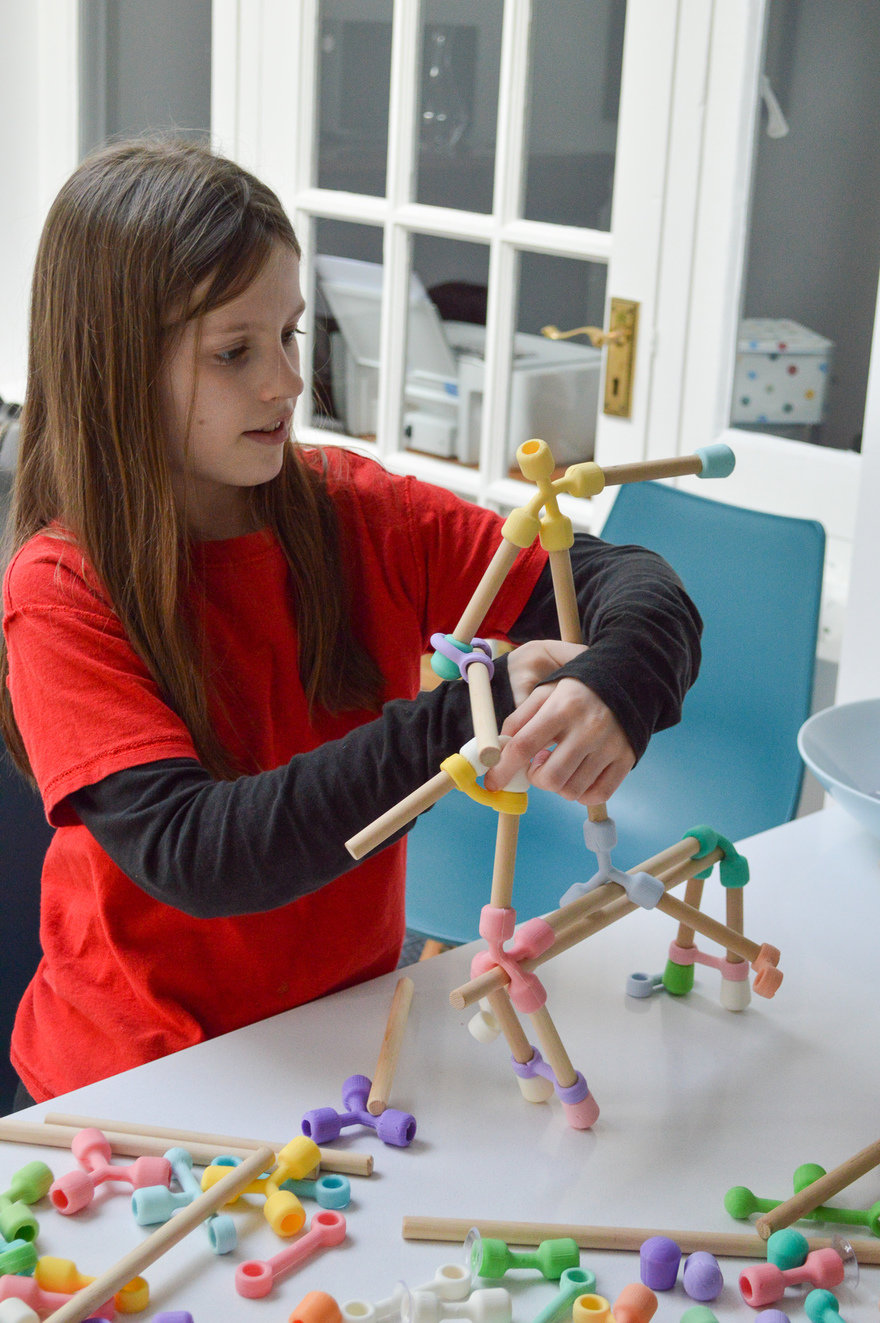 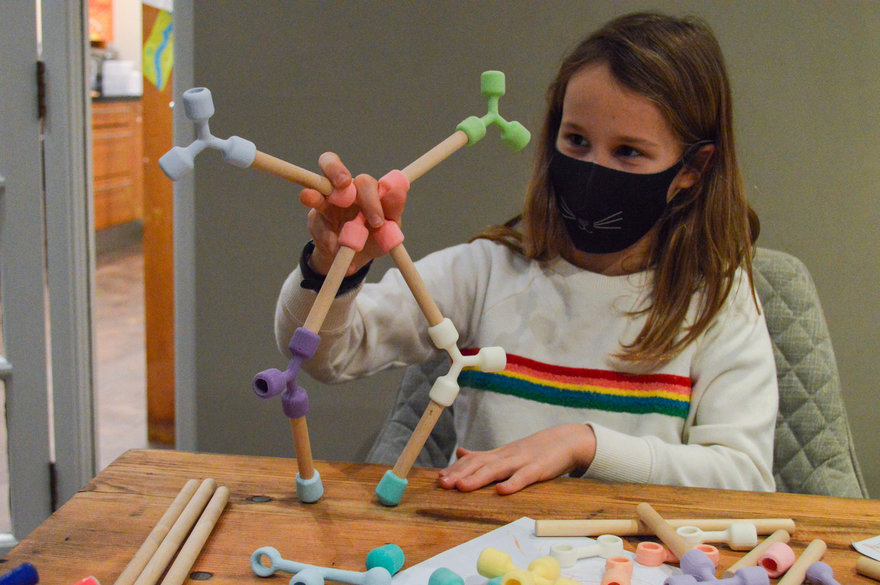 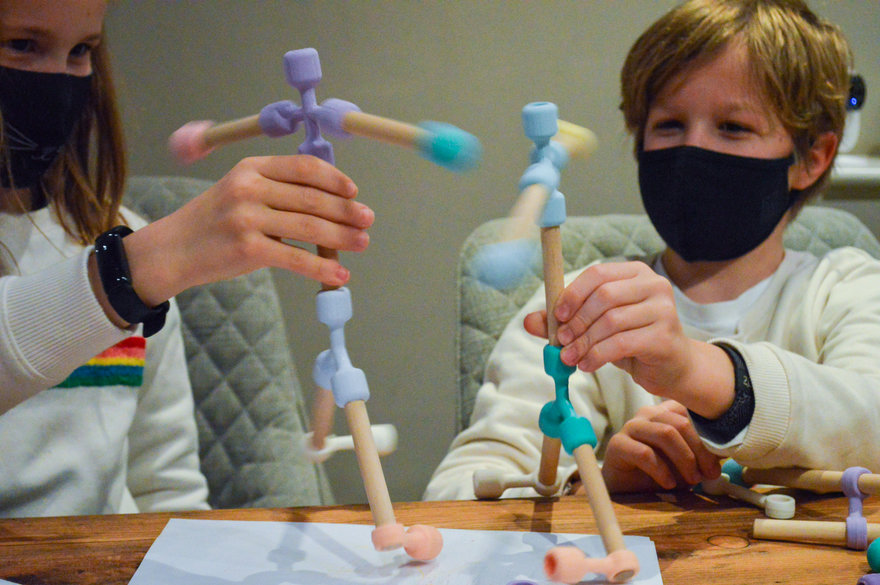 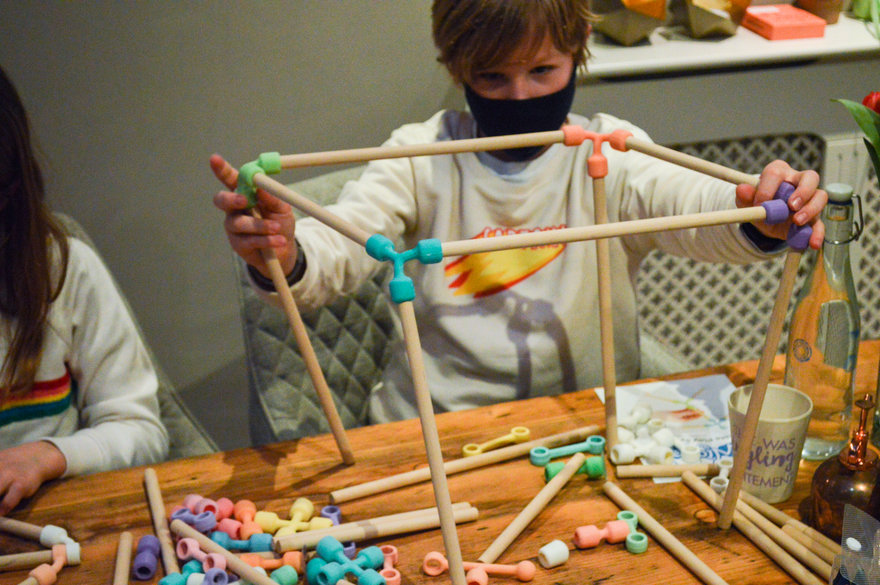 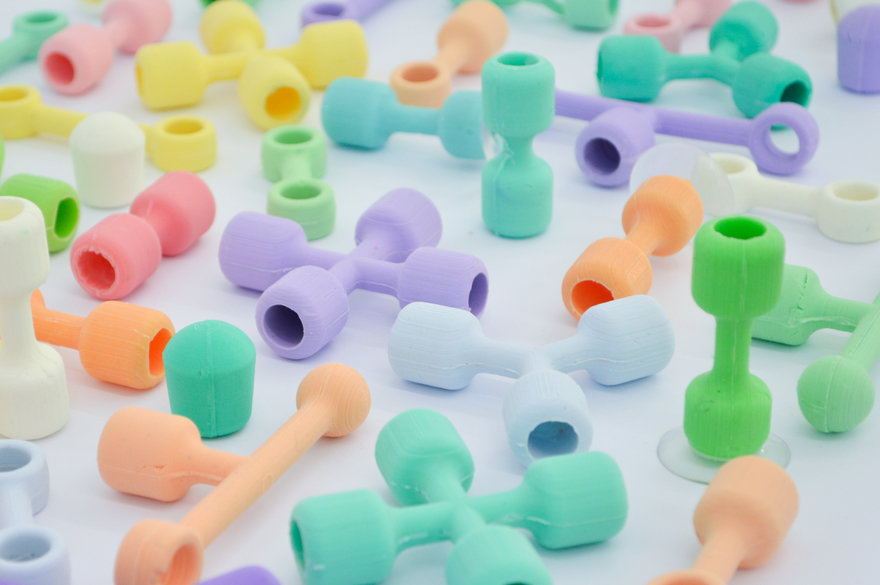 How can you make better problem solvers and collaborators through play?

What could make kids think with their hands as well as their minds?

How much of a challenge should open-play afford?

What sort of playful interactions are not currently on the market?

These were questions that bounced around the back of my head as I de-molded the first prototype of the Wiggel module system while giggling with an idiotic smile. "I've got something here," I thought. In exploring an unconventional approach to repairing a broken dowel while exploring a DIY silicone compound (inspired by Sugru), I realized it had the potential to expand rapidly and intuitively into a system of modules that connected dowels together to create geometric shapes. The next iterations flowed out of me, and before I knew it I had a family of wiggly, bouncy, silly parts that reflected the amount of fun I had developing them.

The Wiggel system is an opportunity for kids (ages 4-12) to expand kinetic and spatial thinking in a way that most constructive systems on the market do not offer. Wiggel more actively shows how gravity and movement are interlinked, and could be transposed to the child's own understanding of how objects, structures, and their own bodies move as part of a system. It features nine different parts to connect to 12mm Maple dowels, including ones that allow for the playing unconventionally in domestic settings by looping around furniture or sticking to windows or other smooth surfaces. Playtest participants were charmed by it's chaotic, unwieldy nature; one even expressed "It doesn't just sit there like LEGO!"

Being a kinetic, tactile play system, it has potential in the domain of Play Therapy. I had a chance to interview a friend and educator of special needs children, who noted that visually seeing how the parts connect, the module feel and texture, and kinetic nature were all important elements in play therapy toys. She also stated that the building of structures is beneficial for gross motor skills, and can influence their development into fine motor skills with continued use. One playtest participant also noted that his friend with Autism would really enjoy playing with the system.

Aesthetically, Wiggel is designed to be ambiguous to avoid its genderization. Open-play modes should be experienced by all children, not just a select audience. It's soft nature was pointed out to have a safer feel–one participant noting that it would not hurt to accidentally step on one of these pieces, unlike Lego.

In reviewing +20 existing construction play products/projects currently on the market or in development it was revealed that very few relied on any sort of flexible kinetic element. While structure weight and composition is certainly important with systems like Tinker Toys, K'nex, and Rigamajig, it is one of the key features that makes Wiggel that much more exciting to use when you're able to make a structure stand on its own or figure out a new way to build your vision.

Development of Wiggel was centered around having as much fun as possible within the Design Process. Play for the sake of play affords openness in both design and in having fun! Within three iterations of parts I was having an absolute blast conceiving and implementing new ideas at a rapid pace. The pieces were designed for injection molding out of Food Grade silicone. While Maple provides a soft warm feel that I've come to appreciate in children's toys, there is the option for custom cardboard tubing. This would have the added benefit of being more ecologically friendly and prevent adding new material into the product stream.

As a product, Wiggel is geared towards children ages 4-11, and best suited for domestic play, educational settings, and organizations that host child-centered activities. The base kit consists of 72 parts and an assortment of dowels of multiple lengths. As the system develops, new parts could be released as "booster packs." Silicone's durable nature affords longevity of the parts, making a system that will last through multiple play eras, and can be handed down between siblings or families. It provides the perfect activity for after-school programmes, and a helpful tool in

It was by no means a surprise that the amount of fun I had developing them was present in the playtests I conducted. They were structured by paying close attention to the five elements of a play experience: Joyful, Actively Engaging, Meaningful, Iterative, and Socially Interactive. I developed prompts to help kids understand the rules of the system on their own without giving away too many of its secrets so that they could experience the joy of discovering them on their own. While my tutors, peers, and colleagues provided keen conceptual and industrial insight, my playtest participants were overjoyed to give their thoughts and participate in the co-design process of bringing Wiggel to life.

Wiggle has been an absolute pleasure to develop, solve, and share with open excited minds. It was born out of my love for making and playing within the Design Process, and that same fun is more than evident in its play and use. It is my hope that the users of Wiggel grow up to be the next generation of Engineers, Architects, and Designers, and Problem Solvers with a lifelong passion for play.