This project was born in discussion with the Bureau of Land Management's Monticello Field Office. In the face of COVID-19, it was neither safe nor responsible for us to travel to the rural and remote communities of Southern Utah. Via remote research and other methods of information gathering, we were tasked to investigate problems such as transport, accessibility, land management, and more across Bears Ears National Monument.

At the onset of the project, Navarro Guerra became initially interested in the use of OHV's on BLM land, and quickly found a variety of detriments to their use. Being personally passionate about OHV recreation, he struggled to look past the pollution, erosion, and disruption to local ecosystems that comes with their use. Separately, Cody Snow was investigating the changing regulations surrounding e-Bikes, as well as the benefits they offered as a transportation method to increase access in the remote landscapes of Bears Ears. Realizing the opportunity that existed between their two areas of research, the two teamed up to investigate improved transportation across Bears Ears.

As the two continued researching as a team, they also realized the challenges faced by the BLM's limited field staff in monitoring visitor actions within the monument. Monticello Field Office team members cited issues such as trail proliferation, cultural site damage, and litter that could be mitigated with improved visitor monitoring. Additionally, having learned about the damages of OHV recreation, as well as their ever-increasing use on public lands, the pair also sought to limit OHV travel and thus mitigate damages to the land.

The final consideration came as continued conversations with the BLM revealed a lack of access to the incredible lands within Bears Ears, while subsequent research revealed the benefits offered by e-Bikes in terms of accessibility over other transportation methods like walking or traditional biking. As such, the goals of our project became to help visitors of all abilities access the natural and cultural landscapes within Bears Ears by providing a platform for the rental of site-tailored e-Bikes. Such bikes will provide transport and education to visitors, funding, and control to management, as well as protection to the land.

Through continued research, collaboration, real-world testing, and digital modeling, the two began work on a system comprised of rental sites, mobile applications, and rental bikes that would provide an alternative, fun, and respectful method of travel within Bears Ears. A mock app was developed in Adobe XD, that would be downloadable on personal mobile devices, offering additional features for users traveling with Axess e-Bikes. This was developed alongside a simplified application designed to be installed and used on the bike itself. A possible rental bike was then designed simultaneously first through sketches, then through 3D models in Rhino6, and finally visualized with renders created in Keyshot9. The rental bikes were given site-tailored features to accommodate the needs of users within the landscapes of Southern Utah and the context of an overnight trip within Bears Ears. 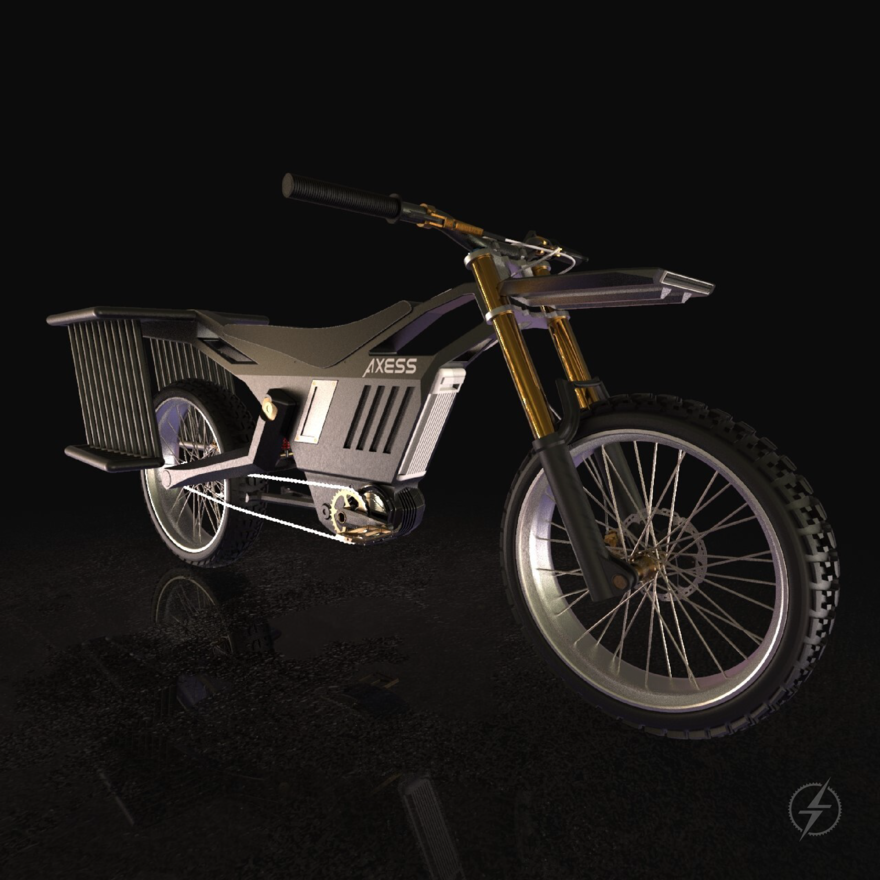 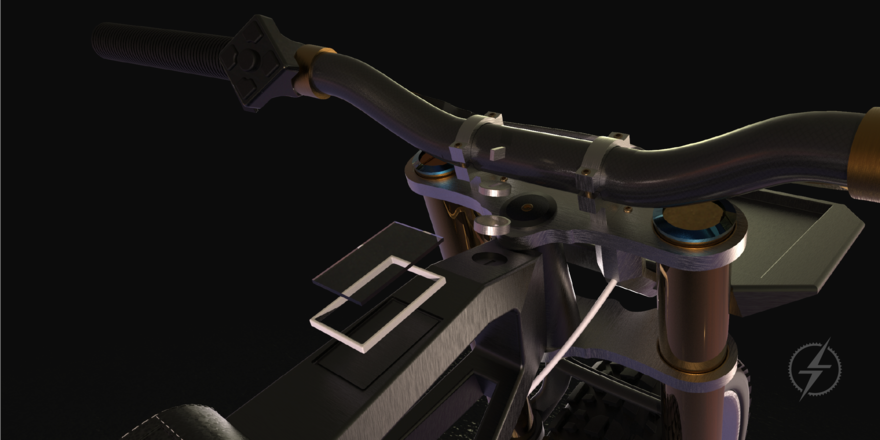 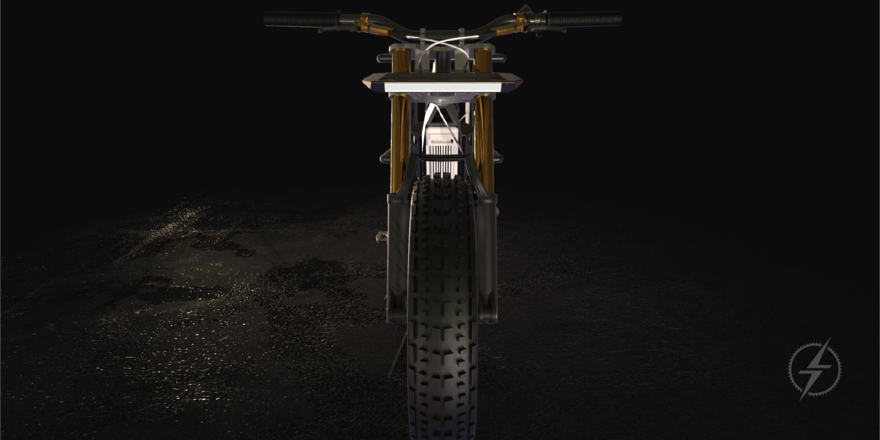 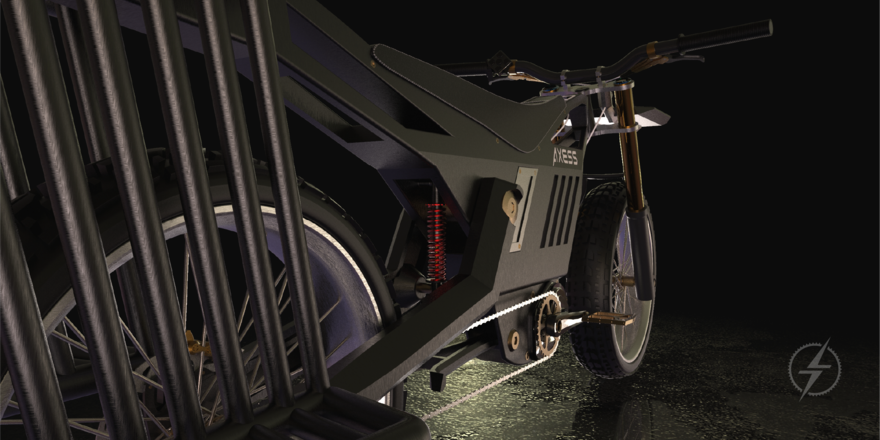 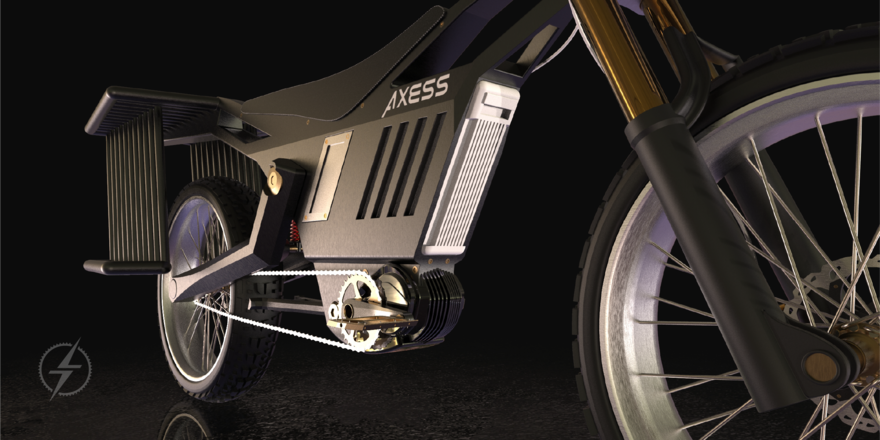 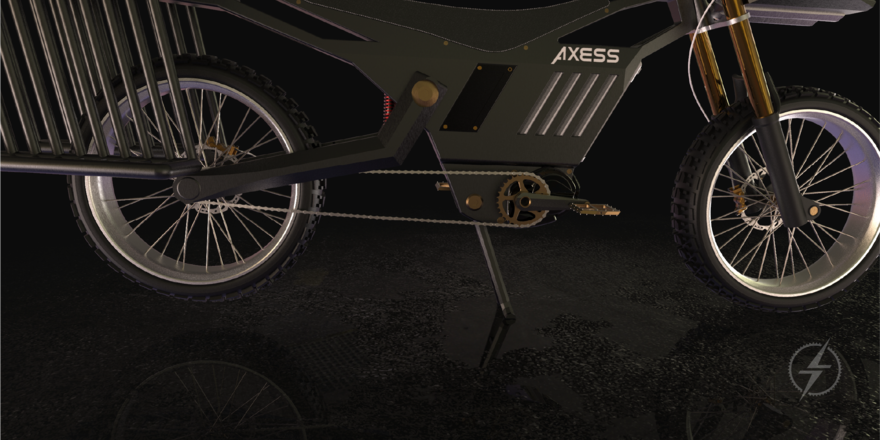 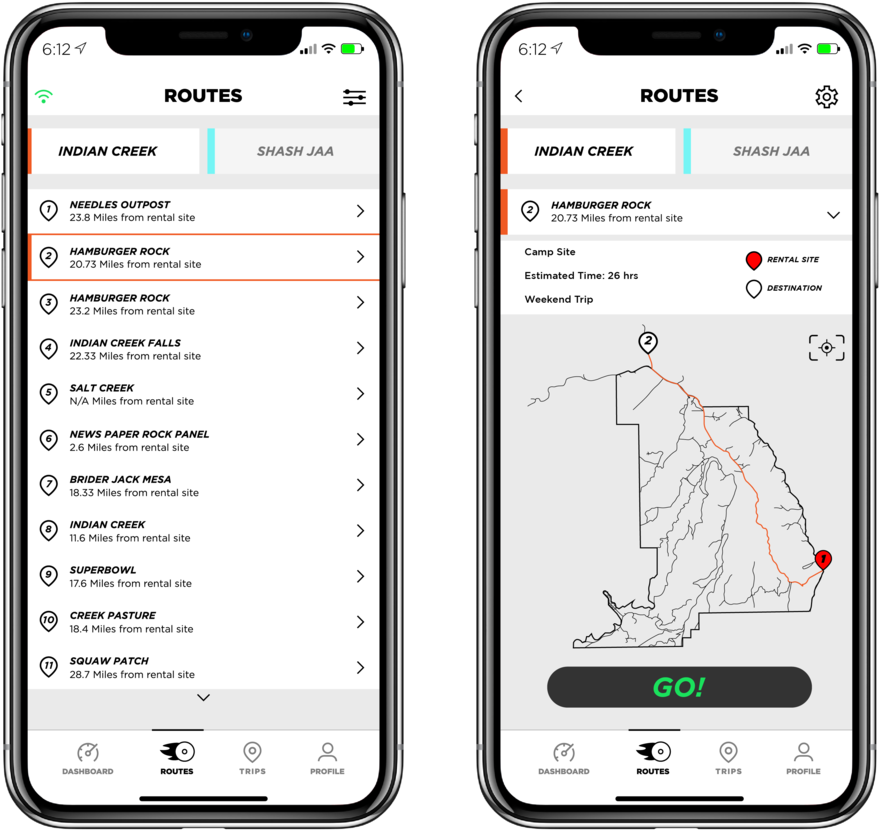 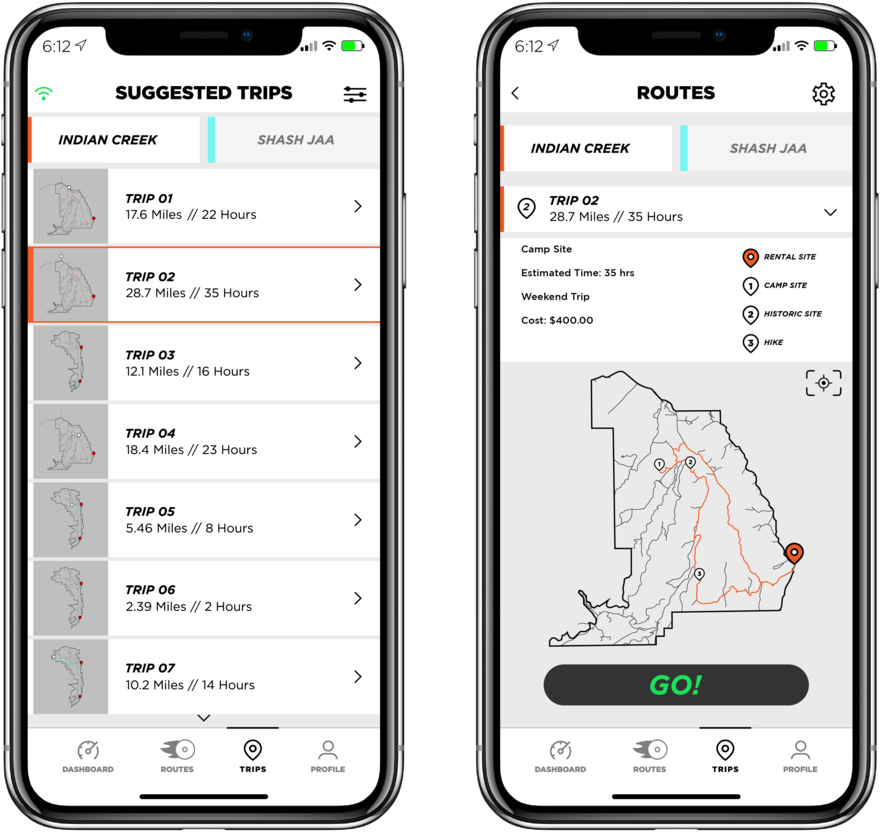 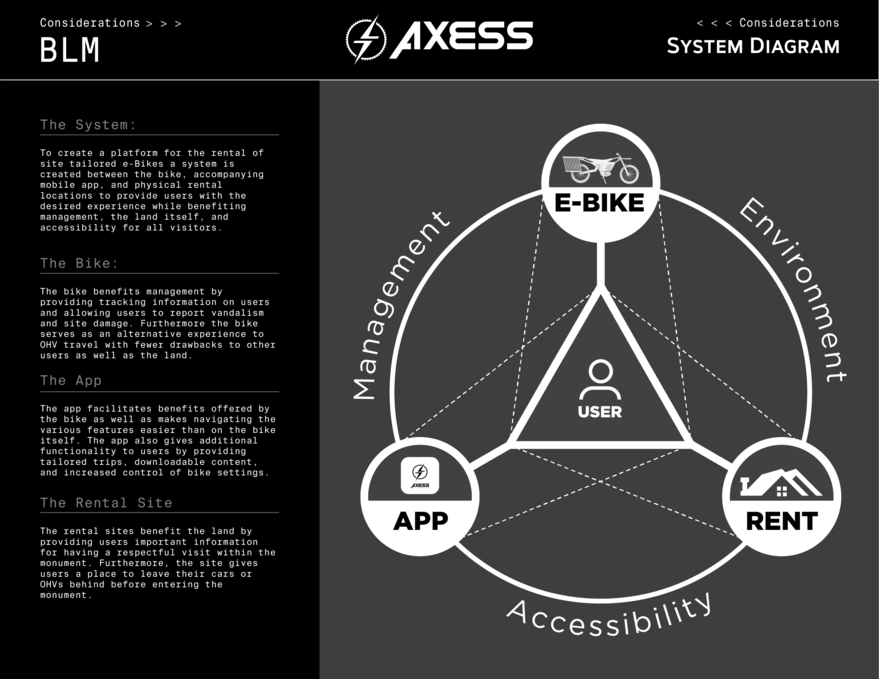 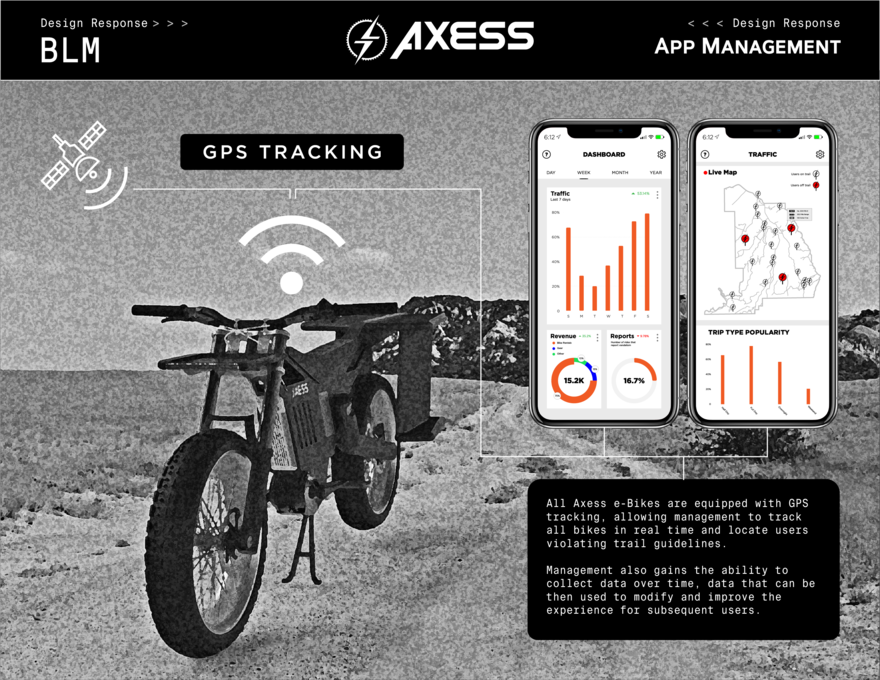 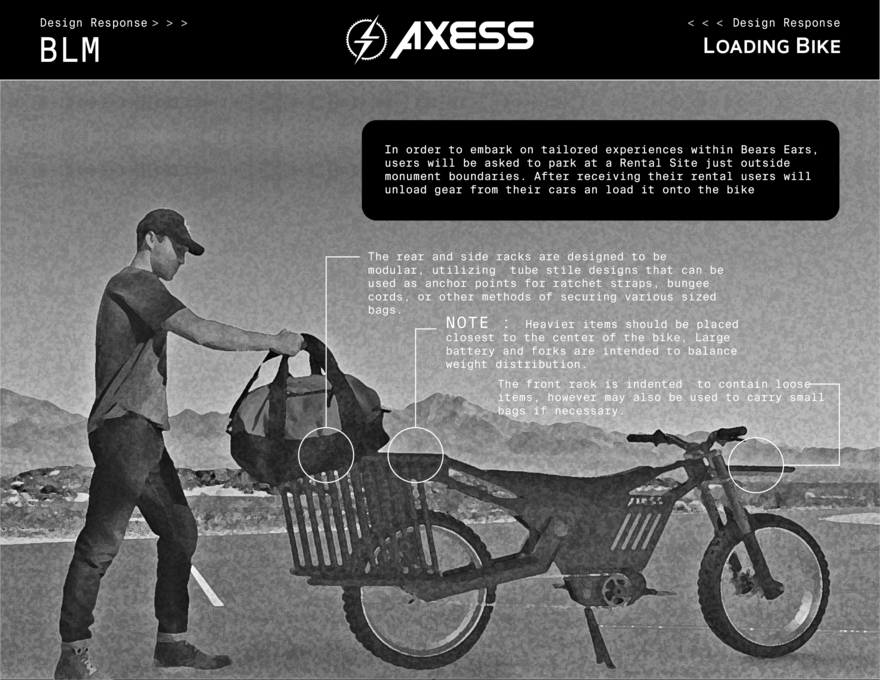 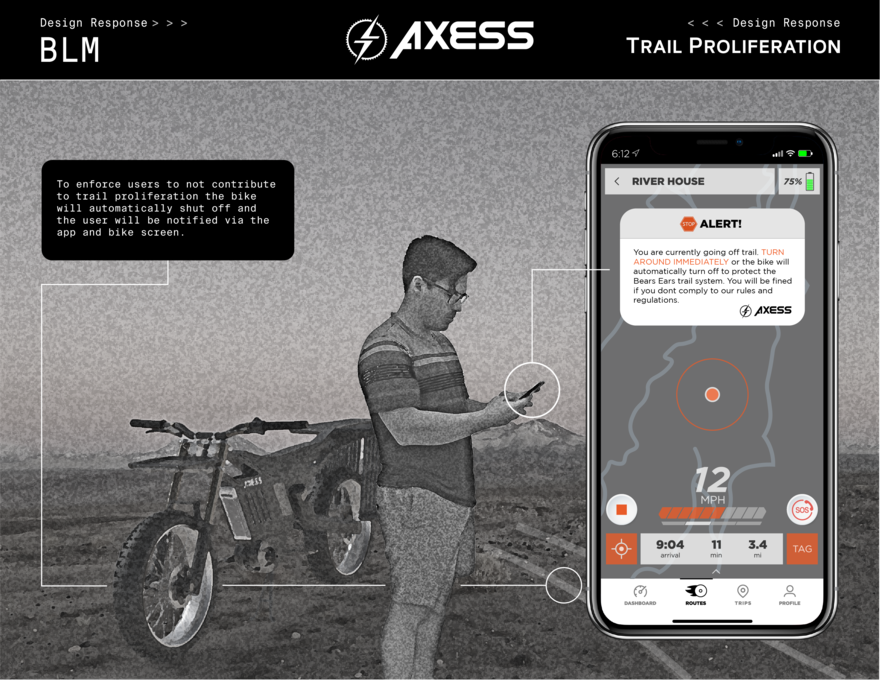 Bears Ears National Monument is a land rich in culture and natural beauty. Native people have a deep cultural connection to the land through their ancestral homes and traditional ways of life while the land itself harbors wildlife and scenery unlike those anywhere else in the world. However, these lands and those tasked with managing them face a variety of challenges. In many cases, visiting these lands by uninformed or uncaring people can lead to severe and irreparable damages. However, for many others, it is simply not feasible to partake in the natural and cultural resources of Bears Ears due to the landscape's limited accessibility. How might visitors of all accessibility levels travel within Bears Ears while being respectful of the land and management?

Due to the COVID-19 pandemic, travel to and from monument lands was neither safe, nor responsible, and the project took on a new level of uncertainty as we had to conduct all our research remotely. We began in a state of confusion, learning anything and everything we could about the land, history, and peoples of Bears Ears. However, in this confusion, we each found problems facing Bears Ears that resonated with our personal interests.

Navi Guerra is a passionate outdoorsman and began his research looking at the recreational opportunities within Bears Ears. Being a rider of dirt bikes and other OHV's he was shocked by the number of ecological detriments associated with their use. Through his research, he discovered issues such as soil compacting, soil erosion, dust storms, plant disruption, wildlife disruption, noise pollution, and environmental pollution that are commonly linked to the use of OHV's. After learning about the continually growing community of passionate OHV riders, he began questioning how to limit or reduce the number of vehicles on BLM roads, without banning their use.

Separately, Cody Snow was investigating the changing regulations surrounding e-Bikes and their use on BLM lands. He found that policies were changing such that e-Bikes would be offered greater access in areas that would otherwise restrict motorized travel. Furthermore, he found research suggesting e-Bikes offered greater accessibility to those with physical limitations such as the elderly and those with disabilities over biking or walking.

Having shared their work with one another in the project's infancy, the two realized an opportunity for design intervention might exist between the intersection of their two research directions, and the two teamed up for the remainder of the project.

Discussions with the Bureau of Land Management

Having gathered information on Bears Ears, the BLM, and their specific areas of interest, the two met with BLM Monticello Field Office members to discuss how the project might move forward. In early meetings, the BLM shared information on the natural and cultural history of Bears Ears, before elaborating on the challenges they face in managing this vast landscape. We were then presented with the Cultural Resource and Recreation Area Management Plan (CRRAMP), which outlined the ground-level actions to be taken over the next 4 years. After reading through the CRRAMP, and hearing from the BLM over several meetings, the challenges faced by Bears Ears and its inhabitants started to reveal themselves.

It quickly became clear that many of the issues faced by the BLM were caused by irresponsible visitation either through a lack of education or care for the well-being of the land. The BLM noted issues of damage to cultural sites, human waste management, trail proliferation, accessibility, and pet compliance as some of the top issues to be addressed through design intervention. Field office members also shared locations of specific problem sites and guardrails that would serve as additional considerations in our design process.

Combining the information they had gathered independently with that information shared by the BLM, the two began searching for their opportunity for design intervention. Having realized the variety of detriments associated with OHV use, the two knew that the project should strive to mitigate OHV travel and in turn mitigate damage to the land. Furthermore, having performed additional research on the 457 miles of roadways designated by the BLM, the two realized the near-impossible challenge set before management. With limited staff and funding, it is clearly impossible to monitor every visitor at every moment within Bears Ears, but the two concluded that there must be a way to monitor at least a portion of those visitors. Furthermore, while performing continued research, the two also found that OHV travel carries with it the risk of spreading invasive species to the land. Here the pair theorized that if they could localize a transportation method within Bears Ears, they would both eliminate the threat of spreading foreign objects, while also offering visitor's an alternative transportation method to personal vehicles. Additionally, the rental and use of such transportation could provide the necessary funding to management, which could, in turn, be used to benefit the land and subsequent visitors.

However, from the onset of their partnership, the two had been primarily concerned with issues of accessibility within Bears Ears. In addition to environmental damages, OHV's are often restricted in the roads and destinations they can access, thus limiting the destinations of their users. However, the two also realized that for many, traditional methods of travel like biking or walking, are too strenuous, and thus again limit the destinations accessible to their users. Combining this realization with Mr. Snow's research on e-Bike travel, the two realized that e-bikes might offer greater accessibility to a wider user group. As such, the goals of the project became to help visitors of all abilities access the natural and cultural landscapes of Bears Ears by providing a platform for the rental of site-tailored e-Bikes. Such bikes would provide transport and education to visitors, funding, and control to management, as well as protection to the land.

Having determined the project's direction, the two set out to design a system to facilitate e-Bike rentals and transportation across Bears Ears. They had to first consider the overall system comprised of rental sites, mobile applications, and the bike itself, in order to then determine those parts of the system that would be designed in the greatest detail. Due to time restrictions, COVID-19, and other limitations, the two knew they would not be able to complete an overall design of each system component and thus chose to focus specifically on the mobile app and the bike itself for their design process.

Both developments for the app as well as the bike began by surveying existing rideshare, transportation, and rental services, to get a sense of the materials and feature sets on current offerings. Having looked at a variety of mobile navigation, rental, and rideshare applications, the mobile app development began with a series of sketches that were later translated into visual prototypes in Adobe Illustrator. Development for the mobile app was accompanied by the creation of a simplified application that could be installed directly to the bike's on-screen display. The mobile and bike applications were built alongside one another, meaning their features and navigation would complement one another on both platforms. As prototyping continued, drawings were translated to Adobe XD where the buttons and animations could be implemented and tested in real-time.

Similarly, having looked at the current offerings of e-Bikes, four-by-fours, medical transportation devices, and more, development of the bike began through sketches exploring the possible forms we might continue to build on. While sketching the various forms, we also developed a list of potential features we wanted to include on the bike that would better tailor it to the needs of Bears Ears and its visitors. Having created a wide range of sketches in a variety of forms, we began testing many of the features we desired to include on our bike in the real world. Using personal mountain bikes, the team began testing screen size and placement with chipboard cutouts. Having determined the best orientations and locations for the screen, the two also tested various storage locations on the bike, thinking about their capacity, weight distribution, and materiality. Using this information and a refined series of sketches, the two moved their work from 2D to 3D in Rhino6. Finally, having created and refined a multitude of models, the two settled on a design that could be moved into Keyshot9 for material assignments and final rendering.

Having presented both their mobile app and bike design solutions to the BLM, the two realized they had unintentionally changed the way users look at e-Bikes. Rather than being seen as the more destructive and noisier alternative to mountain bikes, e-Bikes could now be seen as a more respectful and inclusive alternative to OHVs. Through the use of such technologies, more users can gain better access to the natural and cultural resources of Bears Ears, while also respecting its inhabitants and the land itself.