Swell is a prosthetic foot designed for the challenges amputees face when visiting the beach to surf. While many current prosthetics work well on dry land, their quality and flexibility lack the preferred performance during a surfing session. This drives most amputees to modify an older foot, oftentimes drilling holes and wrapping them in duct tape. Even with these modifications, the experience is far from ideal for these athletes. Since the modified prosthetic is used for unintended applications, it lacks the features necessary to create a successful visit to the beach.

Featuring a unique dual urethane bushing system and sole, Swell allows amputees to closely replicate the flexibility, grip, and movement of a human foot, allowing surfers to move in ways current prosthetics prohibit. Designed with materials intended for use in corrosive saltwater, Swell withstands the effects of the harsh ocean environment from session to session. Swell can be easily adjusted at the beach, which allows users to fine-tune their desired performance. 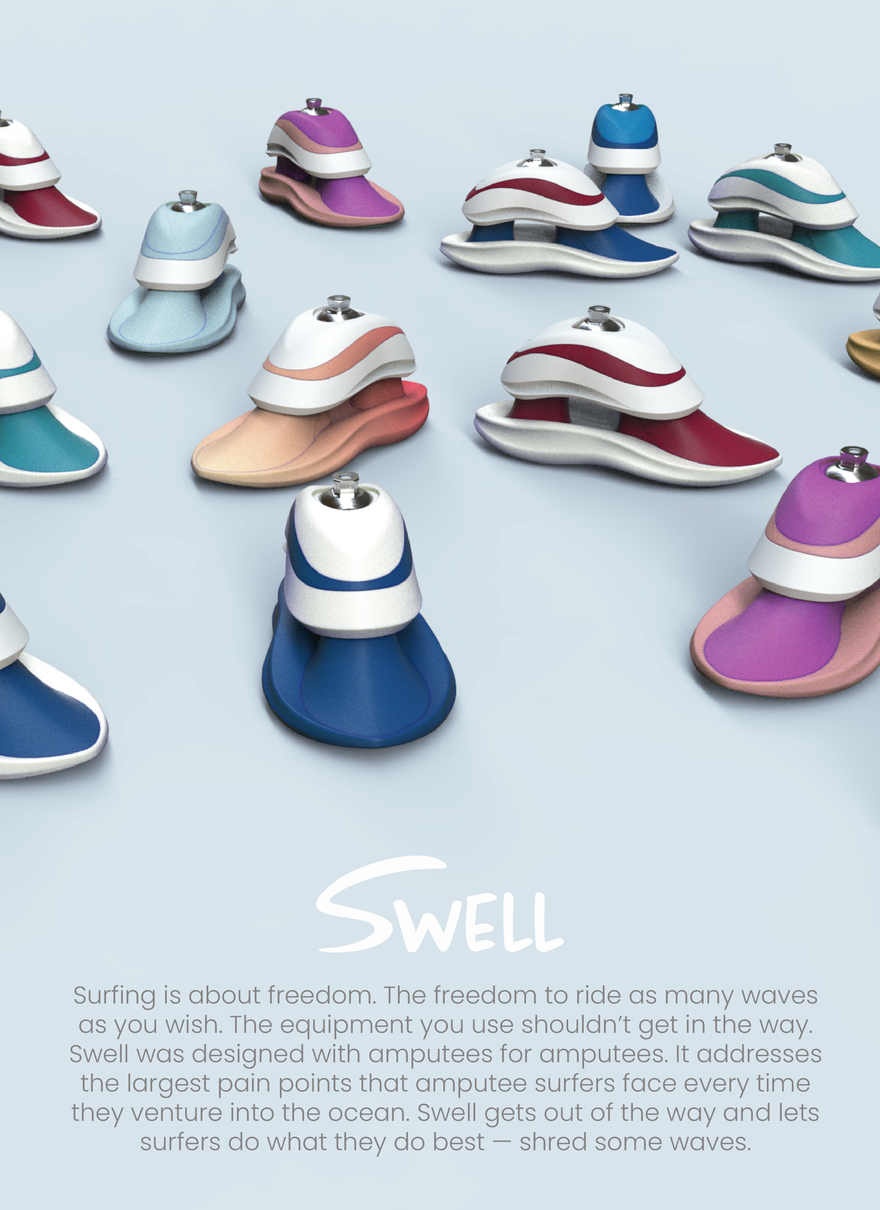 The Problem Many home-brewed fixes (and lots of tape!) 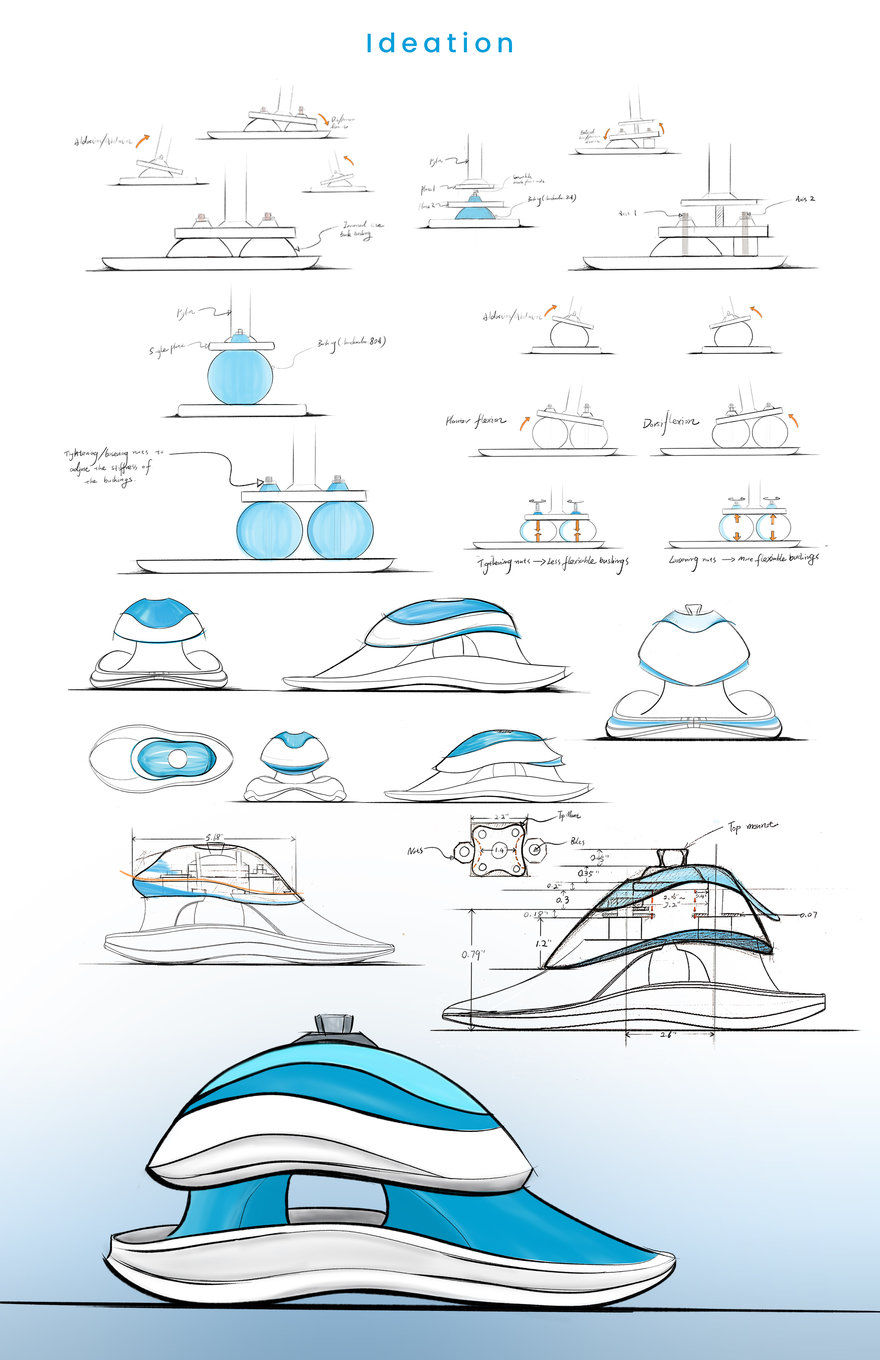 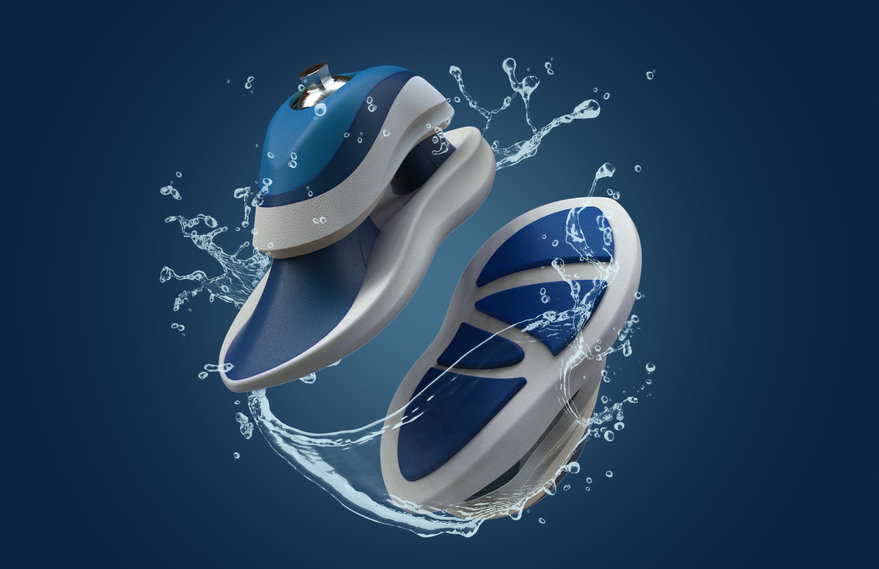 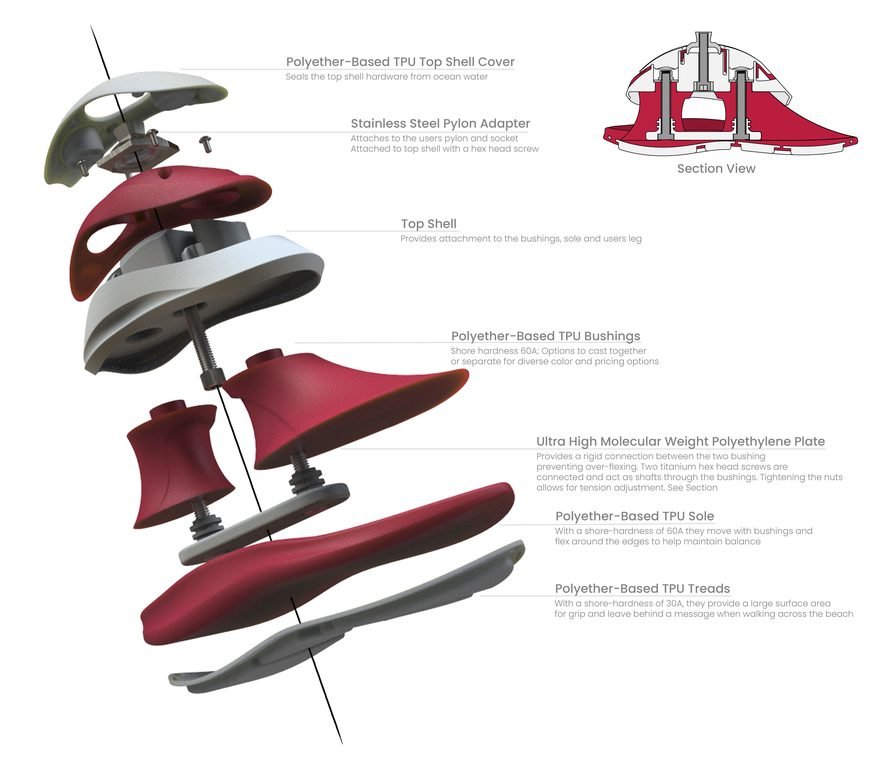 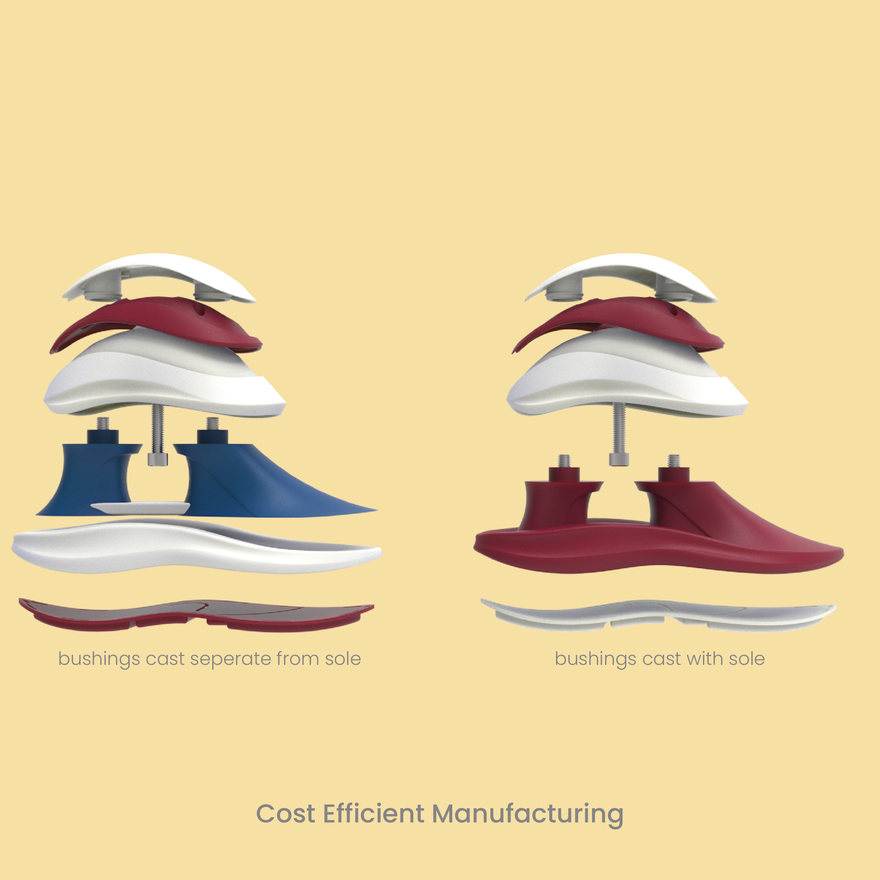 Cost Efficient Manufacturing Swell's construction is simple and enables the cost to remain low for the end-user. Swell's bushings can be molded separately from the sole or together, creating a hierarchical pricing structure that allows for cheaper and more expensive versions of the same product.

The "Pop-Up" The first crucial maneuver when catching a wave

The Empathy Rig Constructed from a medical boot, the empathy rig allowed us to test initial models

Round 1 Tests After successful testing with our empathy rig, we modified the attachment and allowed Lance to give it a try. We were able to learn a lot from these tests 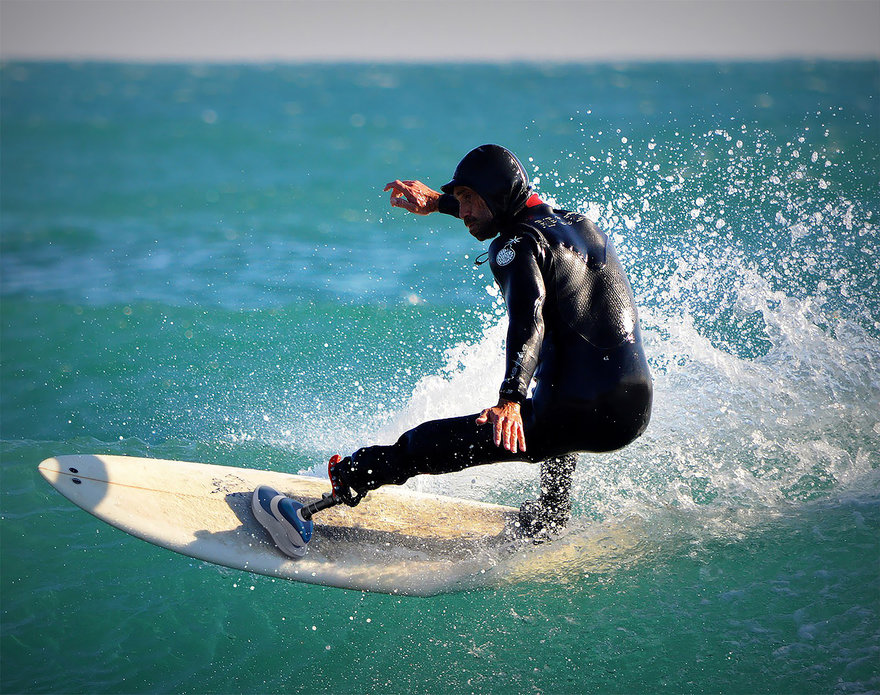 The Surfable Model Our last model before Covid-19; Testing dorsiflexion, adduction and abduction 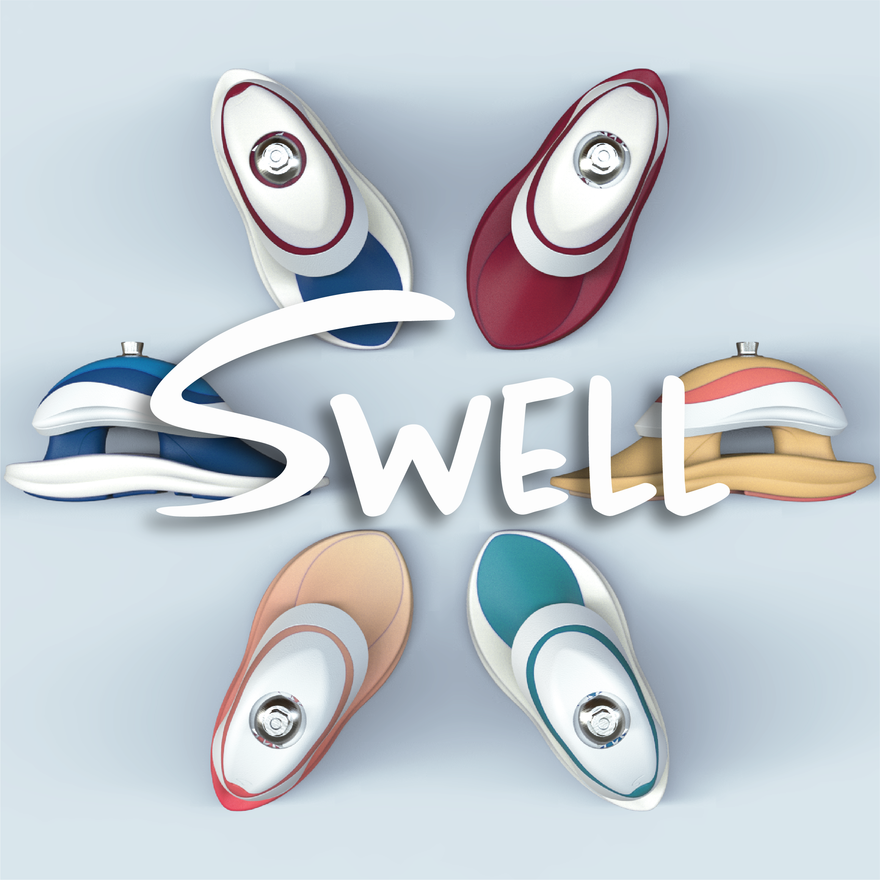 The summer before the project began, I came across a video of adaptive surfers riding waves and I immediately was drawn to the willpower of these individuals. Despite everything they had been through they repeatedly went against the rough tide, conquering the ocean one wave at a time, all with a smile on their face. After some research into the sport of adaptive surfing, my partner and I discovered the lack of products for this population and were amazed by their ingenuity when it came to home-brewed fixes. However, even these "solutions" were failing them.

Surfing is a worldwide sport that has gained popularity over the last several decades. With its inclusion in the 2020 Olympics (pre-COVID-19), the sport is poised to be in front of more audiences than ever before. Currently, there is a push to add adaptive surfing to the 2024 Olympic Games. By offering a product that enables individuals to participate in a new sport at a low cost, Swell is uniquely positioned against other competitors on the market.

PTSD and depression are two leading conditions often related to an amputation. Surfing and surf therapy are commonly recommended by doctors as a way to treat these conditions. Programs, such as AmpSurf, help these individuals get started with surfing, but the current market of products isn't affordable or easy to obtain, especially for newly amputated individuals.

Through a series of interviews conducted with amputee surfers, we were able to quickly discover common pain-points across the group. Redmond Ramos, a veteran, and below-the-knee amputee surfer said, "Being in the water is the only time I truly feel limited. I can run and bike and walk, but when it comes to the beach it's hard." The products that did move the way they wanted were expensive and not covered under insurance, and most of the time were not waterproof. The ones they could afford lacked any range of motion and had no pop-up flexibility, along with limited grip. Moreover, since they were modifying old prosthetics not intended for use in the water they exhibited a short lifespan.

Inspired by the team at Smart Design, we developed an "empathy rig", by modifying a medical boot with a common attachment we would use on all of our initial prototypes. This allowed us to replicate the feeling of a stiff prosthetic foot and test a variety of potential solutions, before testing it on an amputee. We then took the top candidates and modified them to the universal "pylon" attachment for amputees and headed to the treadmill. By using the human ankle as a benchmark, we conducted a series of tests to experiment the degrees of flexion we would need to create a foot that would be successful on a surfboard. The adduction and abduction motions were critical and this eventually led us to our dual bushing system.

The original models we tested were constructed from rubber dog ball toy (V1 of the bushings) and thin sheets of wood. This allowed us to experiment with lots of configurations quickly, while simultaneously researching different materials. We discovered if we could shape the bushings out of a similar material as the balls, we would have a lot of control over the angles in which the foot could flex. We created a "bushing spectrum", a scale with various forms representing different extremes (ie, an hourglass vs a bulbous sphere). This allowed us to pinpoint the ideal shape, amount of material, and where we needed it.

The sole developed in a similar way. Our initial tests with a wooden sole worked well exhibiting both rigid and flexible motion. However, wood isn't waterproof, swells, and is brittle. We quickly realized much of the material research from the bushings could be directly applied to the sole. We were able to combine our form development into mold making and cast various iterations of both the sole and bushings. We kept going back to our empathy rig and Lance (our volunteer amputee) with these models to test and ultimately tell us what felt the most comfortable.

Designed With The Surfer in Mind

Surfing is about freedom. The freedom to ride as many waves as you wish. The equipment you use shouldn't get in the way. Swell was designed with amputees for amputees. It addresses the largest pain points that amputee surfers face every time they venture into the ocean. Swell gets out of the way and lets surfers do what they do best — shred some waves.

Swell is your surf leg. Swapping the leg on is easy and once equipped, nothing else is needed. Its sand-resistant design provides traction allowing you to make your way to the ocean. When your surf session is complete, easily swap your Swell leg off and switch to your everyday leg.

Swell's range of motion is powerful on and off the board. The soft sole provides comfortable plantar and dorsiflexion motion making walking feel natural, while also absorbing shock. No longer is an altered form needed to pop up. The flexible toe box on Swell allows multiple degrees of flexion, allowing the foot to stay flat on the board. Whether you surf regular or goofy, Swell is able to adapt. On the board, the experience with Swell gets even better. Swell's motion in the abduction and adduction direction (about 60 degrees) allows for maneuvers unique to surfing. The treads on the bottom of the foot near the toe, sides, and heel provide a large surface area for grip, which minimizes slippage and allows for longer, more balanced rides. Once off the board, the foot leaves an impression in the sand, letting others know a Swell surfer has conquered some waves.

Swell's construction is simple and enables the cost to remain low for the end-user. Swell's bushings can be molded separately from the sole or together, creating a hierarchical pricing structure that allows for cheaper and more expensive versions of the same product. During initial runs, a single mold could be used. This could be expanded in the future with a secondary mold, without a change in the design, which opens up the possibility for more versatile color options. The various colorways and the ability to mix and match designs by swapping out the soles gives users control of a foot like never before. These features combined make Swell a product unlike anything currently available to amputees.

Swell could also be sold as a sports recreation product, not solely as a prosthetic, allowing it to exist on the market at an affordable cost for new amputees. By selling Swell online, the experience would be like buying a new pair of shoes, not a medical product. With various colors, inspired by the ocean and surf culture, there is a color for everyone. By excelling in these areas, Swell creates a significantly better, personalized experience for beachgoers and surfers.

Unfortunately, due to COVID-19, we were forced into lockdown and our semester was cut short. This led to a surf trip being canceled, and we were unable to get our final model in the ocean. But our previous tests, conducted on land allowed us to verify the motion and grip we were aiming to achieve. The balance board gave us a realistic (and extreme) example of what would occur in the ocean. We are still in contact with our surf network, and when safe we will get to see Swell in the ocean!