Caida is Spanish for fall, and while it is not the goal of deep-water soloing (DWS) to fall, it is the only protection rock climbers have when climbing without ropes on limestone overhangs 100-plus feet above the sea.

DWS is a small, elite sport that is currently underserved by the outdoor recreation market. Although this extreme outdoor sport attracts risk-takers and freedom-seekers, their safety always remains important so they may survive caida and climb again another day, if not again the same day! Thus, the most important consideration when any deep-water soloist (DW soloist) falls while climbing is to survive their fall, and safely get back on the rocks to push their physical limits once more. The second most important consideration is to access dry chalk to put on their hands so they can resume their climb.

So far, the outdoor sports apparel industry has overlooked DW soloists' unique combination of needs. Seeking out DWS gurus in sport locations such as Spain, the United Kingdom, and Squamish, British Columbia, Hebert took to Instagram to assemble a cohort to survey. Her research showed unmet needs for a streamlined personal flotation device (PFD) that offers superior mobility, protection when falling from a height, easily adjusted buoyancy, quick drying properties, and robust durability. In addition, these athletes must be able to keep their chalk dry and accessible.

Hebert's next step was to investigate the inflatable PFD market. Through this research, she found an important market gap: considerable overlap in PFD needs between DW soloists and watersports enthusiasts. The latter group reported a need for an aesthetically pleasing, streamlined PFD that allows the athlete to adjust inflation without repacking the inflatable bladder between uses. Using the parameters outlined by DW soloists, Hebert conceived of a unique solution customized to the small DWS market while also meeting the needs of the much larger watersports community better than anything currently on offer.

Caida consists of a sleek vest and chalk bag that addresses all functional and aesthetic considerations. The resulting design allows the DW soloist to climb unencumbered by a bulky PFD, enhances safety in the event of a fall, provides buoyancy while the DW soloist is in the water and offers easy access to dry chalk. Two main features differentiate Caida from currently available products. First, Hebert eliminated the inflation-related bulk of the vest, which is necessary for buoyancy. Second, she designed a bag with a watertight compartment that protects excess chalk from water damage upon submersion.

Hebert collectively named the two products Caida for marketing purposes and hopes to merchandise them as a pair and offer them as a crowdfunding opportunity. She produced the final design in partnership with Mustang Survival, a company that designs and builds marine gear. This will act as a minimal viable prototype for the DWS community's feedback and assessment of the garment's suitability for the sport. 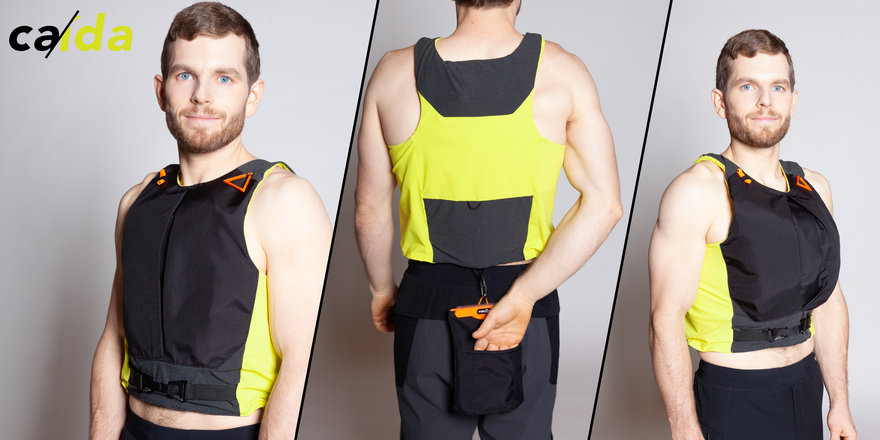 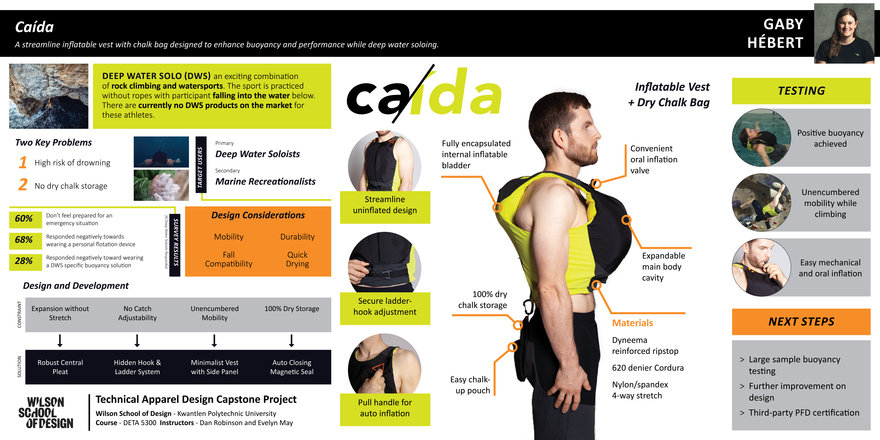 Product Poster A summary of the whole design 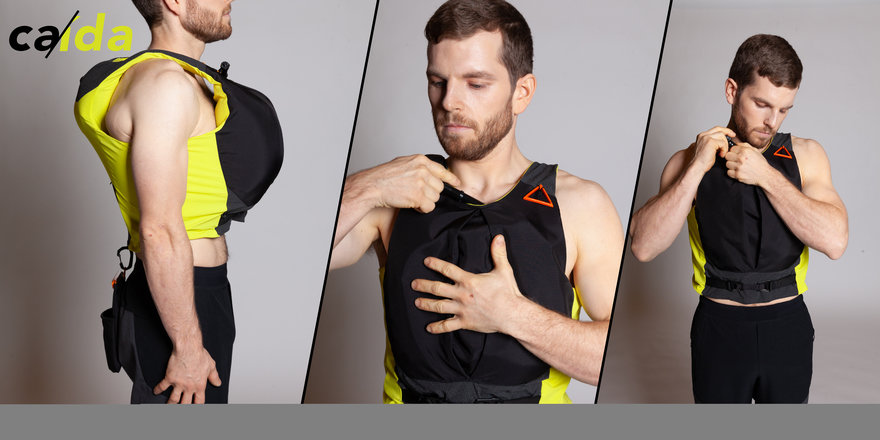 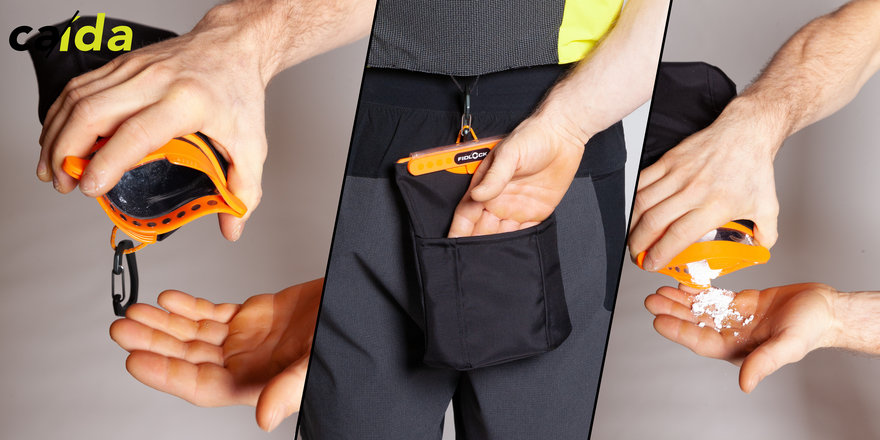 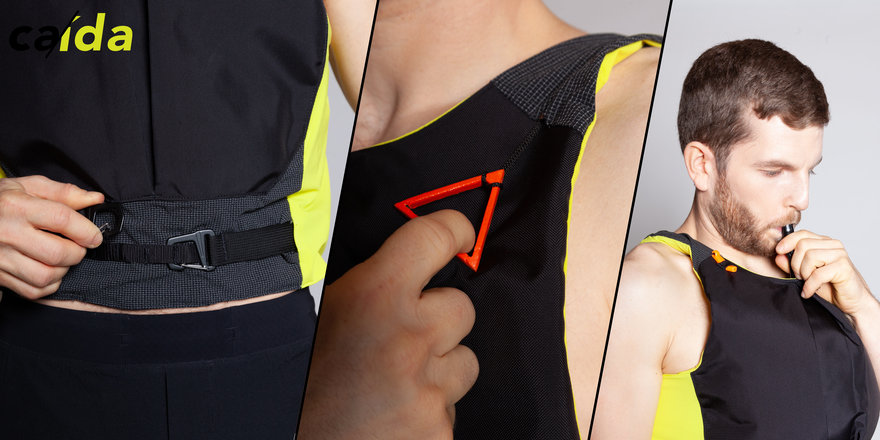 In just four months, Gaby Hebert created a fully functioning buoyancy aid specific to a highly specialized sport. Although still uncertified by a third party agency, the product acts as a minimum viable prototype for future innovation and commercialization. Her product is unique—the only fully inflatable buoyancy aid you don't have to repack after using which allows for streamline use when repeatedly transitioning from in to out of the water.

Hebert set out to create apparel that promotes safety while enhancing athletic performance in a sport called deep-water soloing (DWS). In the established sport of bouldering, rock climbers climb without a rope; if they fall, they fall to the ground. Deep-water soloists (DW soloists) also climb without a rope, but if they fall, they fall into the water. When they emerge, they need dry chalk to ensure peak performance on their next climb. DW soloists tend to attempt riskier climbs than boulder climbers because of the relative "safety" of falling into the water beneath them (from 100 feet, water has the surface tension of concrete, posing considerable risk).

Although people practiced DWS in the 1970s, the formally defined sport emerged in the 2000s. It is now globally recognized with annual competitions and many developed crags worldwide. Originally named psicobloc (literally "psycho bouldering"), it is said (though disputed) that Mallorcan Miquel Riera came up with DWS out of frustration over the cumbersome nature of traditional climbing, establishing the first DWS area in Porto Pi, Spain, where it remains popular.

Speaking with both professional and amateur DW soloists about the sport, Hebert interviewed participants about their interest in a custom PFD. Demographically, 67% of DW soloists are men; 65% of whom are from 18 to 35 years; most are Caucasian, unmarried, and have post-secondary education.

Outdoor sports enthusiasts seek risk for many reasons, but they're also concerned about safety. The majority of DW soloist are avid rock climbers and have practiced the sport before starting to DWS. The marine element added to DWS is what makes it unique to other forms of climbing. As a result it adds an element of danger and fatigue that the sport's participants must deal with.

Hebert used an iterative approach, creating an initial concept to generate feedback followed by a series of prototypes with increasing improvements. To meet the buoyancy requirement, she decided the garment should be in the form of a vest with a front pocket for chalk. Well-known DW soloists Matt Maddaloni and Mike Robertson felt the front pocket added bulk on the front of body and a pocket that high on the body would make the chalk hard to access. They noted the long webbing straps for side adjustability could interfere with climbing.

Hebert also consulted Michaella Londry and Polly Zuo, product engineers specializing in PFD development at Mustang Survival, which developed the prototypes. Although removing the foam protecting the bladder from punctures would reduce bulk, they noted, it would necessitate using an extremely hardwearing fabric to stand up to rock abrasion. To prevent the bladder from bursting when inflated, they said, it is usually larger than the outer shell, so the shell is a key factor in determining the size of the inflated bladder. They also suggested filling pockets with heavy objects so testing would simulate worst-case scenarios for buoyancy. Finally, to ensure garment stability, general construction should follow standards set by the Underwriters Laboratory (UL).

Hebert decided to focus the design process on the outer shell rather than the technical challenges presented by the bladder. Although further work on this project could allow for the addition of a custom bladder, she designed the shell around the UL-approved Khimera bladder, and replaced the pockets with a matching chalk bag to be sold with the vest.

The feedback Hebert gathered helped inform her decisions about materials and further design changes. To protect the bladder from puncture, she chose a highly durable material. To balance the added weight, she chose a lighter but still durable second material to be used in conjunction with the former. Both fabrics were non-stretch, causing concern about adjustability and buoyancy, and neither allowed for expansion and contraction, necessitating a search for alternative means to address these concerns.

With the prototypes, Hebert worked through ways to conceal potentially cumbersome fabric sections that would allow for expansion without sacrificing a streamlined fit. An initial box-like design requiring finicky sewing of 45-degree mitered corners created weak points that would not withstand expansion. Hebert then constructed a straight-pleat expansion using a continuous piece of fabric to increase strength and durability. Considering different style lines to conceal the pleats, she decided on a vertical pleat at centre front. A vertical pleat would be less likely than a horizontal one to get caught on protruding rock features and would lie flatter on the body even arms raised above the head. She placed the pleat strategically on the centre front of the garment where the bladder expansion would be concentrated.

In conjunction with developing this method of expansion, Hebert considered different types of adjustment. She eliminated plastic and mesh sides, which would lack durability in salt water and lose elasticity, and decided against cumbersome webbing straps. This left the ladder-hook system as the best option for adjusting the buoyancy aid.

Hebert assessed the fit and function of the garment on an ongoing basis with each prototype. In the final design, unique features of the fabric include that it is thin enough not to restrict climbers' movement, yet robust enough to resist damage from intense sun, rock abrasion, and salt water. It has minimal impact when it hits the water and is quick drying, reducing the risk of water dripping into climbing shoes and decreasing performance

Once Hebert decided to separate the vest and chalk bag, the design of the latter proved simple. Market research showed Fidlock Hermetic technology to be the best choice of available water-sealing technology. A two-compartment design provides one that opens like a traditional chalk bag with easy access, and a second featuring a magnetic auto seal to keep a backup chalk supply 100% dry in the event of a fall.

The project was assessed by testing the completed design against each objective. Design metrics included: emergency buoyancy; streamlined design; freedom of movement; easy access to inflate the bladder; dry storage for chalk; a PFD dry time of 5 minutes after submersion; a garment safe to wear upon impact with water; and durability for strength and longevity. The products performed suitably on all fronts. The only category that requires further testing is buoyancy on a large pool of subject to certify the product as an approved PFD. This testing may lead to further adjustments to the bladder to ensure that the product works on a variety of sizes and body types.

An important part of this project was to create a garment that DW soloists would wear while climbing. Although many design decisions were based on functionality, aesthetics were also considered. A long-standing belief that wearing a PFD isn't "cool" meant that Hebert consciously and constantly sought a sleek, trend-setting look.

Hebert pulled inspiration from WGSN for Spring/Summer 2022. The Active Forecast, titled "Euphoric," speaks to energizing designs with bright basics and retro aesthetics. The forecast predicted people will be looking for designs and experiences that facilitate a feeling of "escape." As an emerging, exciting sport that provides a strong sense of freedom from ropes and rules, DWS will fit this trend. Hebert consulted The Active Colour forecast as well as non-aesthetic trends in fit and form and chose a design aesthetic based on technical, performance-related design components, observed industry trends and forecasts, and current fashion tastes. Creating five mood boards to convey this aesthetic, she considered colours (neon sea creatures), lines (sea, sky, and rock), context (time on rock and in the sea), balance (of safety, performance, and fun), materials (rugged, durable, and waterproof), and details (bold, eye-catching detail on a low-profile adjustment system).

Hebert investigated a relatively new sport emerging from a more established one. With no products on the market catering to this new sport's atypical needs, her product—Caída—is in a unique position in the niche field of DWS equipment and the broader field of outdoor apparel. While the Caída vest and chalk bag provide an unprecedented apparel solution for the safety and performance of DW soloists, the vest could satisfy a greater need for a streamlined buoyancy in the wider marine safety market.