SkateLite - the skateboard truck redesigned as a single bodied, complex and compliant structure that retains the classic feel and motion of its almost 50-year-old counterpart.

SkateLite began as both an investigation into skateboarding's transition into Industry 4.0 and an exploration into the future possibilities of broader suspension systems achievable through Additive Manufacturing (AM). As the skateboard truck has remained mostly unchanged since the '70s and its overall dimensions are suitable for most desktop 3D printers it was selected as an ideal research platform.

Research began with observations, surveys and interviews alongside secondary research of possible improvements to the conventional skateboard truck. The truck's dynamic movement was also studied to identify the key aspects of its unique turning action. AM techniques including part consolidation, compliant mechanisms and complex structures were then investigated to reduce material and weight, simplify manufacturing, and shorten supply chains. Current AM technologies and materials were then explored for their possible integration into a new skateboard truck design.

Through a long process of ideation, sketch modelling, and rough prototyping, a design was realised for further development and prototyping experimentation via CAD modelling and 3D printing. Many half-scale and full-sized 3D printed prototypes using several materials were created and tested to inform the final concept, material selection and AM technology choice.

The final SkateLite concept incorporates a single bodied, complex structure designed to replicate a traditional skateboard's classic feel through its semi-compliant design. This allows the truck to move dynamically as pressure is applied to either side, giving it a conventional truck's classic turning action. It utilises the Markforged X7's ability to combine Fused Filament Fabrication (FFF) with Continuous Filament Fabrication (CFF) technology to increase the design's strength and resilience. Incorporating a both a nylon/chopped carbon fibre composite along with several strategically placed layers of continuous carbon fibre allows for optimal flexibility while maintaining strength.

The result is a design that is half the weight of conventional skateboard trucks and produced in one single manufacturing operation. It also allows for localised manufacturing creating the opportunity for a digitised, product-service system that could allow for customised, bespoke, made to order parts that significantly reduce waste associated with current extended supply chains and excess stock manufacturing.

SkateLite not only shows the potential that AM presents in the skateboarding industry, it highlights the possibility for new radical product interventions in a wide range of other industries. The technologies and techniques explored through the project open new opportunities to improve efficiency, manufacturing and performance of suspension systems in many sectors, from cycling and automotive to aerospace. SkateLite creates a glimpse of a lighter, more localised and customisable future. 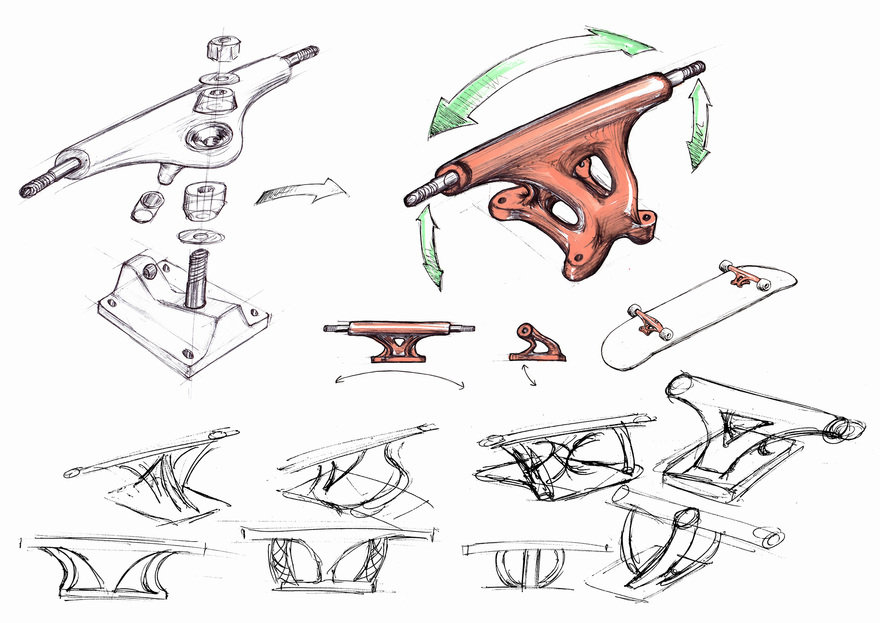 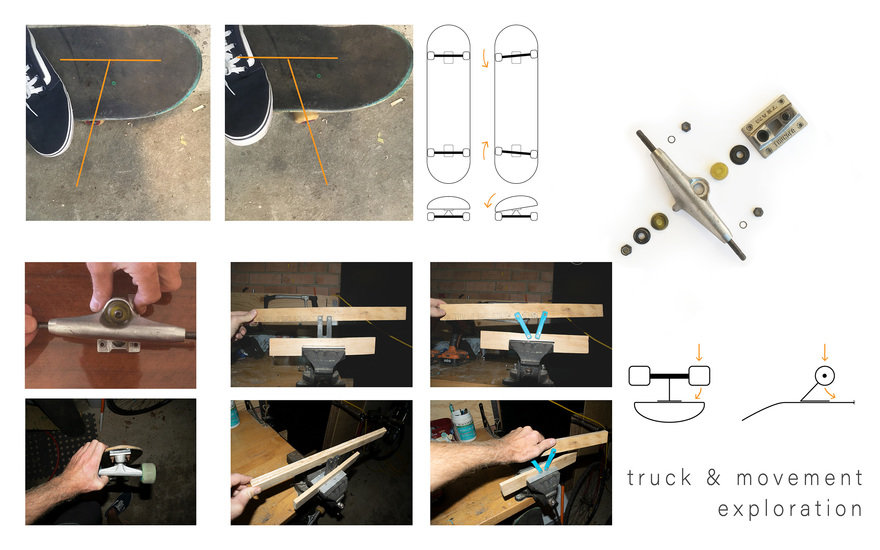 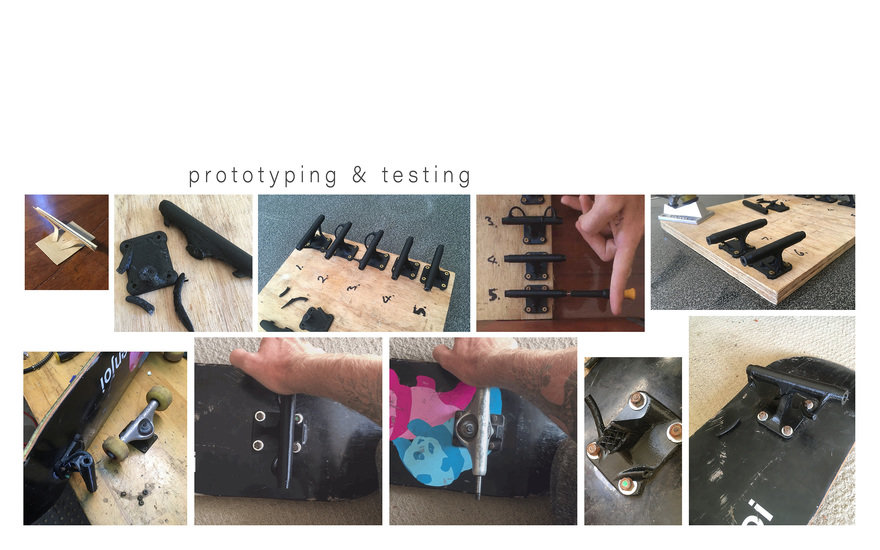 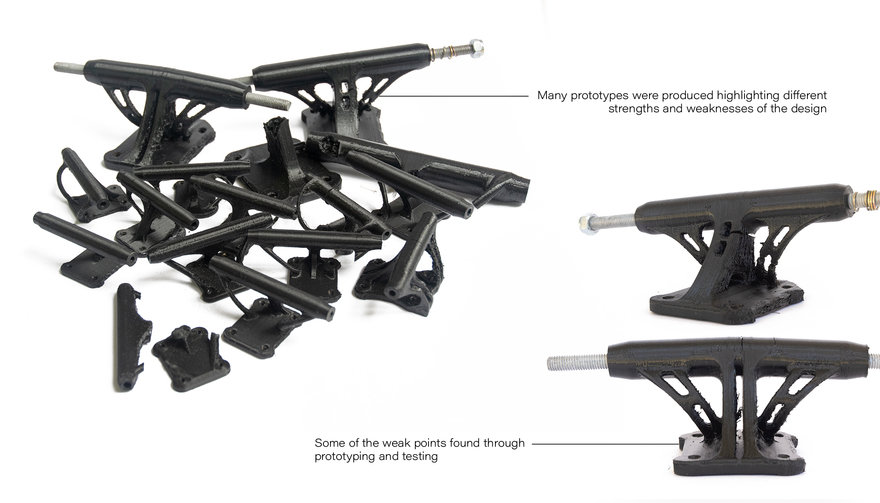 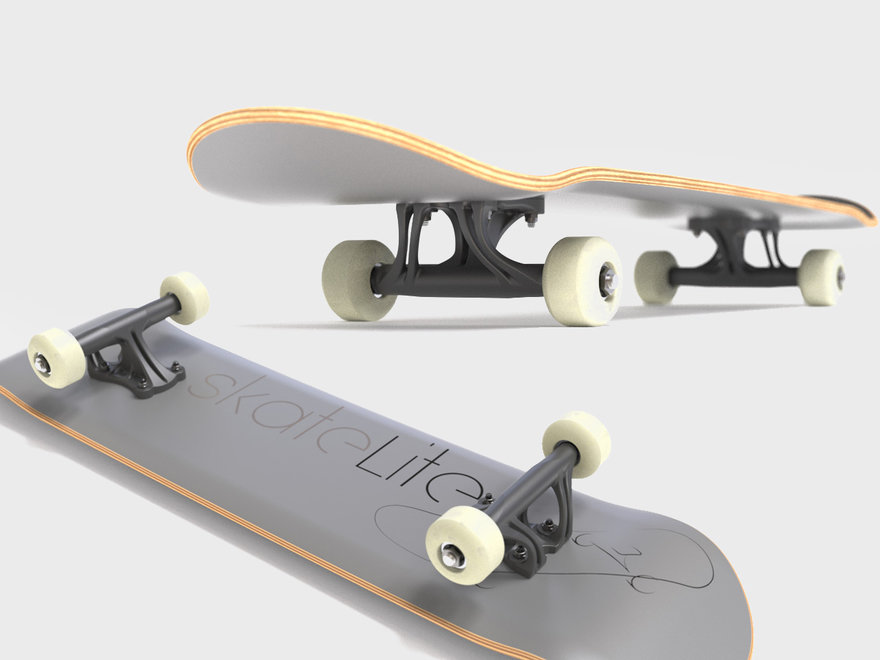 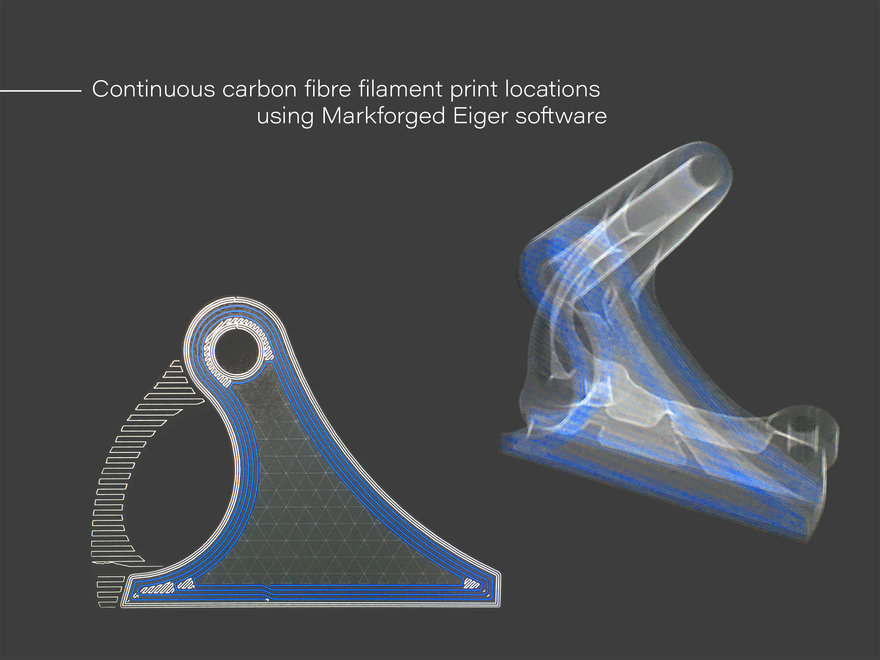 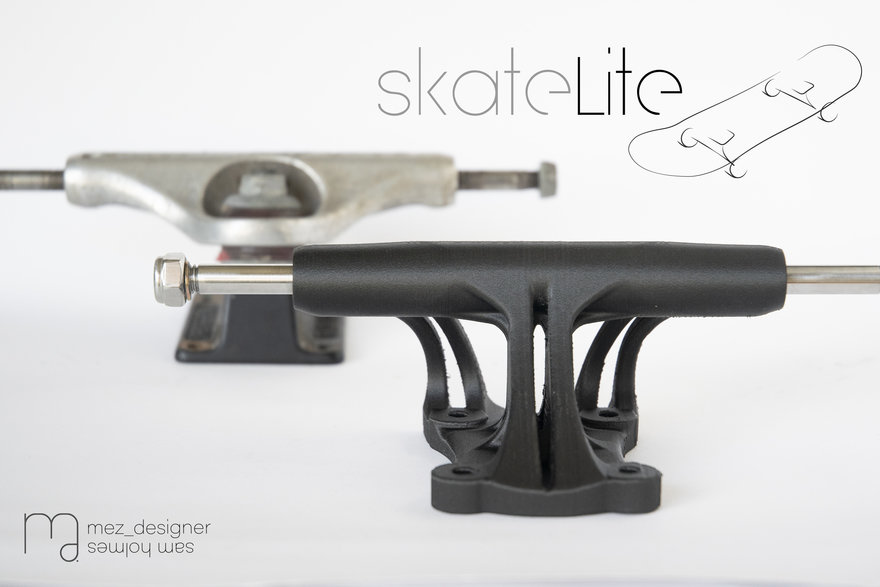 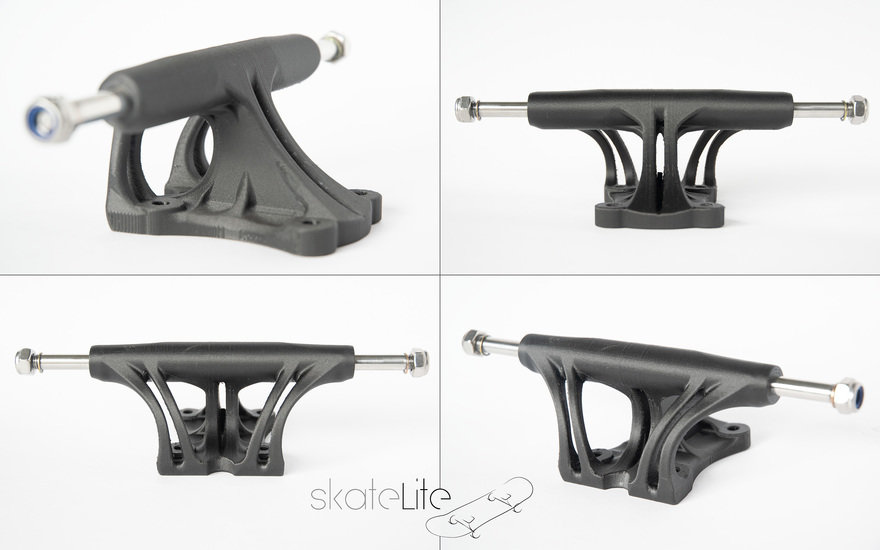 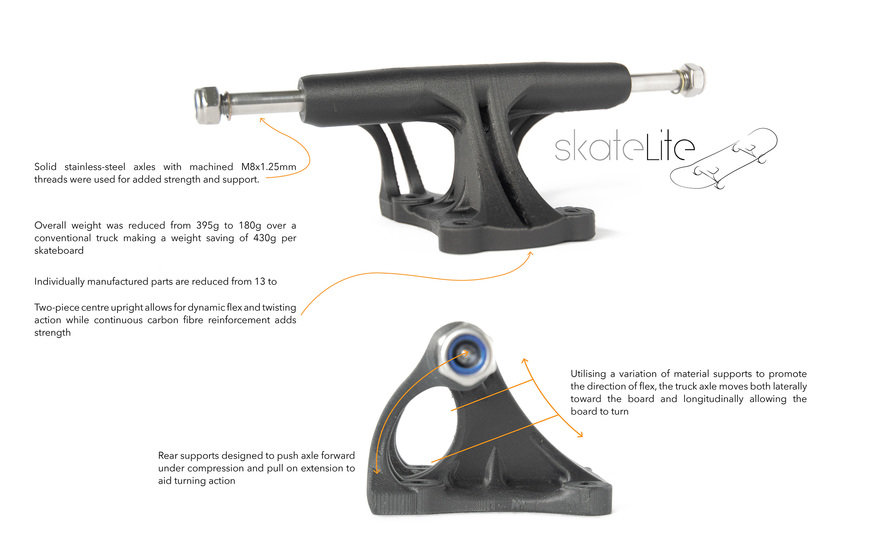 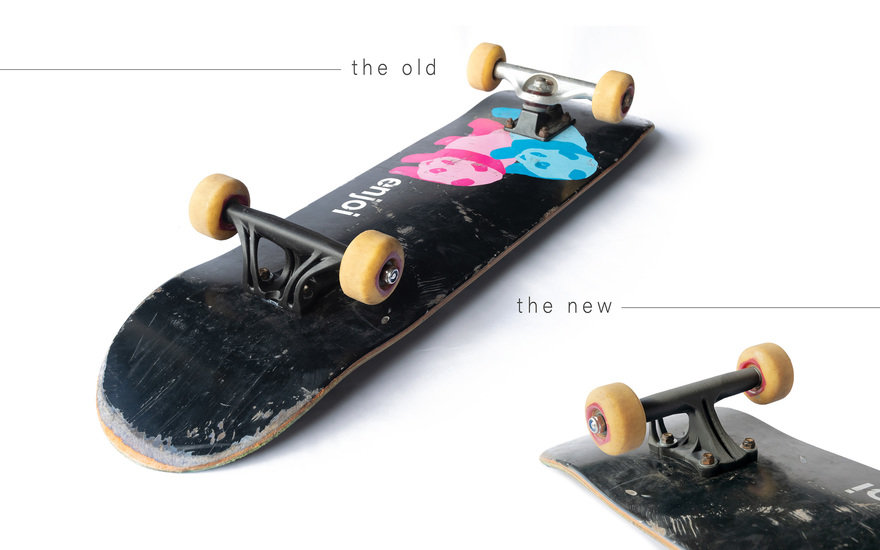 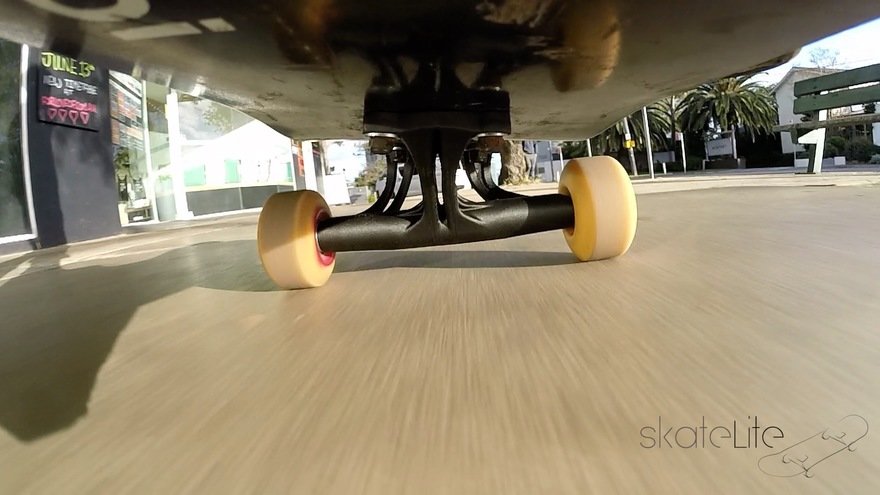 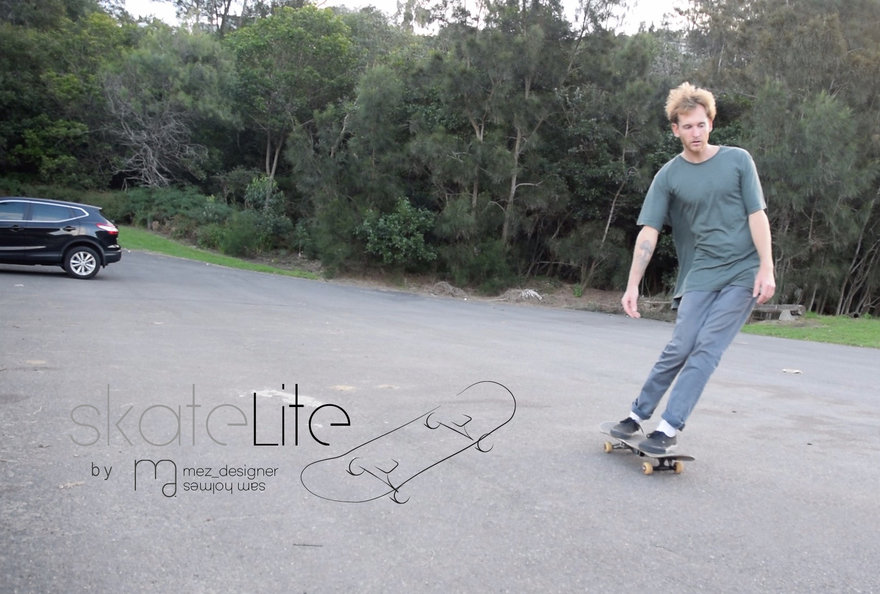 Additive Manufacturing (AM) is being increasingly utilised across all industries for an array of benefits. Bicycles are becoming lighter and stronger through optimised complex geometry and form optimisation. Footwear is becoming individually customised to improved performance via complex compliant lattice structures and improved material properties through Continuous Direct Light Processing (CDLP) technology. And research into gas turbine manufacturing is greatly reducing the number of individual components through part and feature consolidation. These are only a few of many examples in which AM is advancing design, manufacture and use across the globe.

By utilising some of the many new possibilities presented by AM this project aims to explore how these can benefit the manufacture and use of skateboards, transitioning the sector towards Industry 4.0 while exploring improvements to broader suspension systems. Observational research, surveys and interviews were carried out alongside secondary research into existing products and markets and found that weight reduction would be a key improvement. Not only to skateboard performance but also use as they are often carried for long periods and are heavy, cumbersome objects for travel and commuting requirements.

Through ideation and research, it was decided that the project would focus on the skateboard truck. It is a part that has remained largely unchanged with lightweight versions only existing in expensive exotic materials such as titanium or magnesium and still weigh in over 500g for a set of 2, with most conventional trucks weighing around 800g per set.

A skateboard truck is responsible for both transferring the load applied to the board (deck) toward the wheels and allowing it to turn as the load is focused on either side. To accomplish this there is a dynamic movement through the bushes of the truck. As the wheel is forced closer to the deck it is also moved longitudinally causing a twisting action through the axle. For a successful product that reduces user learning, this action must be replicated.

To understand this action, conventional trucks were studied, taken apart and measured. Rough mock-ups and prototypes were built to investigate how to convert this movement to a single compliant structure. It was discovered that an angle between the deck and axle in the longitudinal plane could replicate a conventional truck movement as the load is applied to either side of the axel.

Alongside physical testing of the action, sketches were used exploring different ways to implement the movement into a single bodied compliant structure. The conventional mounting holes, axle and wheel positions were kept maintaining compliance with existing skateboard parts.

Rough cardboard sketch models alongside CAD modelling were used to ideate and further conceptualise the form.

Once the first CAD models were finalised, the first design was printed to test the action (at 1:2 scale for time and material efficiency) in PLA using FFF on a Snapmaker 2.0. This failed immediately due to print orientation and the anisotropic nature of FFF printing technology.

To counteract this issue the next prototype was printed at 90 degrees for increased strength through the upright. Able to be tested properly, the axle of the truck moved longitudinally under compression as intended except in the wrong direction. It was found that the side supports had a greater effect on the action than was first thought. This was rectified in the next prototype with modification to the support angles and upright direction.

A further nine 1:2 scale models were then printed in PLA refining the form, action, strength and flex of the truck until the movement replicated that of a conventional truck.

PLA's ease of printability, low cost and lack of petrochemicals made it a good choice for initial prototypes, though its brittle nature meant to further the project a new material would have to be used.

FFF materials were researched using material data sheets, reviews, discussions with 3d supply stores and online videos of material testing and use. For further prototypes, a blend of nylon 6 and 6.6 produced by Polymaker named PolyMide CoPa was chosen for its combination of low warpage, high impact strength and toughness, resistance to cracking, printability, cost and similarity to Onyx, the material used in Markforged CFF printers.

After testing the PolyMide CoPa, the first full-scale prototype was printed with a 30% infill. After annealing the print (to relieve stress and promote layer adhesion) it was bolted to a skateboard for testing. Though successful, being close to that of a conventional truck, when weight was applied to the board it quickly failed, cracking through centre upright and side supports. This was caused by a combination of insufficient infill, the form not allowing enough flex and the material being too brittle.

Further research into the nylon highlighted its hydroscopic nature. As it absorbs moisture it gains toughness and loses hardness making it more flexible and less likely to crack. The research also found that it was possible to moisture condition nylon by placing in hot water for 2 hours to rapidly increase moisture content.

The next iteration was redesigned to counteract the previous failure. The form was updated by separating both the centre upright and side supports into two thinner sections. This allowed for more flex while retaining mass and better suited a solid print. Once printed at 100% infill, the part was moisture conditioned by submerging in a pot of water at 80°C for 2hrs.

After an axle of M8x1.25mm threaded rod was installed and the prototype attached to a skateboard, it was ridden successfully. The truck supported the weight applied and allowed the board to turn like a conventional truck only with too much flexibility and ease of turning. Also, the axle had started to bend causing a crack between layers due to a lack of support and the low strength of threaded rod.

The design was modified to spread the load on the centre of the axle to reduce bending and the centre uprights were thickened and partially joined to create less flex. However, when tested, this design failed, cracking through one side of the centre upright. It was discovered that both centre supports had to move independently to allow for the dynamic movement and could not be joined.

The next and final iteration to utilise standard FFF print technology was designed as a blend of both previous models to create an appropriate amount of flex without breakage. This tested well with a similar feel to a conventional truck, though it was clear that the limitations of standard FFF print technology had been reached in terms of weight vs material strength and to explore the possibilities of AM in production of skateboards, CFF technology would now need to be explored.

CFF technologies use of a nylon/carbon fibre composite base material and continuous carbon fibre inlays ability to create much stronger and stiffer parts had to be taken into account for the projects final prototype. Both the PolyMide CoPa and the CFF's Onyx materials were closely compared so that the design could be modified to take the greatest advantage of CFF technology, and the design was adjusted accordingly. Using Markforged's Eiger slicing software, four continuous carbon fibre inlays were incorporated into the design. This consisted of two evenly spaced in each upright to give the model added strength, more consistent flex and higher resistance to fatigue while reducing weight.

Throughout this project, some of the key advantages of Advanced Manufacturing Technologies in relation to contemporary skateboard trucks have been explored. Weight has been greatly reduced and material efficiently increased by employing several different methods. Utilising complex structures unpractical for use with traditional manufacturing technologies to create a compliant flexible structure, a large reduction in individual parts was achieved saving weight and reducing complexity in manufacturing. The ability of CFF to incorporate continuous carbon fibre reinforcement into a single manufacturing operation was used to increase strength and resilience of the design while reducing the amount of material needed, again for the benefit of weight reduction and simplified manufacturing.

Through final testing of the design, it was proven that CFF can improve the performance and manufacturing of skateboarding technology as part of the sector's transition into Industry 4.0 alongside other global economic shifts into the 4th Industrial Revolution. It also presents the possibility of similar techniques and technologies being used to the same advantages in a range of other suspension componentry from cycling to automotive.