Man-made climate change presents us with immense challenges. One of the most dramatic, because far-reaching, consequences of rising global temperatures is the melting of the ice masses in the Arctic Ocean. Stopping or even reversing this supposedly distant but serious development is becoming increasingly difficult over time.

One solution is offered by the non-profit initiative "Project ARCSTAR", a year-round program for the short- and long-term preservation and regeneration of the sea ice melting in the Arctic.

With the help of floating, highly mobile floes, large areas of the increasingly ice-free, deep blue, light-absorbing and heat-storing ocean are covered. Locally produced and made from organic residues, these naturally long-lasting, slowly biodegrading composite structures reflect just as much sunlight as conventional sea ice due to their bright white color and optimized pore geometry, thus lowering both average water and ambient temperatures. After studying the local economic structures, a sustainable material combination of sulfur-free lignin and calcium carbonate, two unused by-products from the wood, paper and fish industries (each 50 million tons p.a. worldwide), was successfully developed based on the example of the city of Tromsø, Norway.

Beyond the winter, the floe also serves as a catalyst to actively facilitate and accelerate the freezing process. The spongelike structure of the floe not only increases reflectivity, but can also absorb and store water. The constant exposure to the much colder water surface skips the usual freezing process that would otherwise begin at sea depth, allowing the floe to freeze directly and form new sea ice themselves. As a result, the ice is sustainably preserved in the world's fastest warming environment and can regenerate.

The system is not intended to be permanently deployed in nature, but rather seen as a temporary solution to save the Arctic from its irreparability. This does not affect the responsibility of each and everyone of us to contribute to a more sustainable way of life for our society. 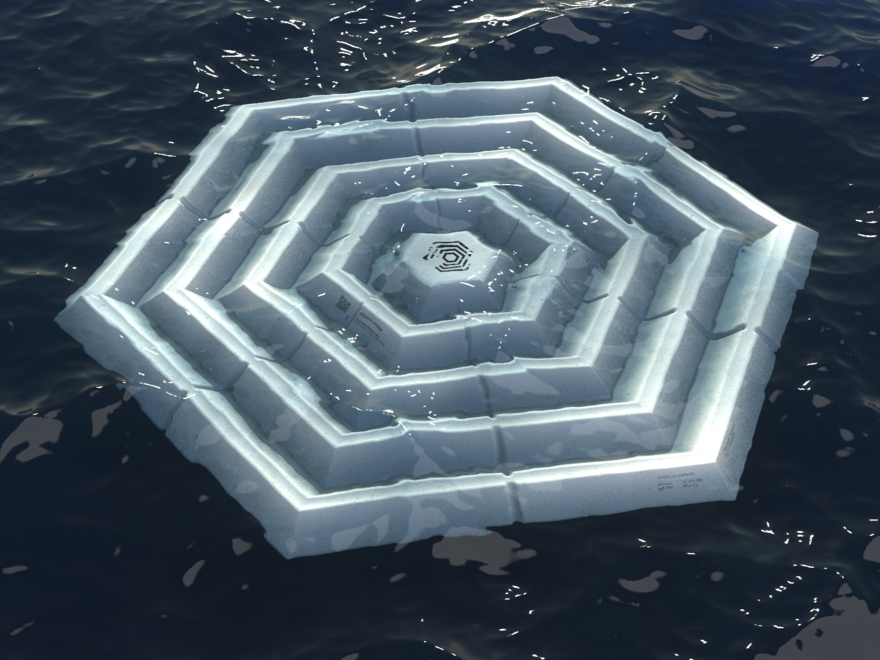 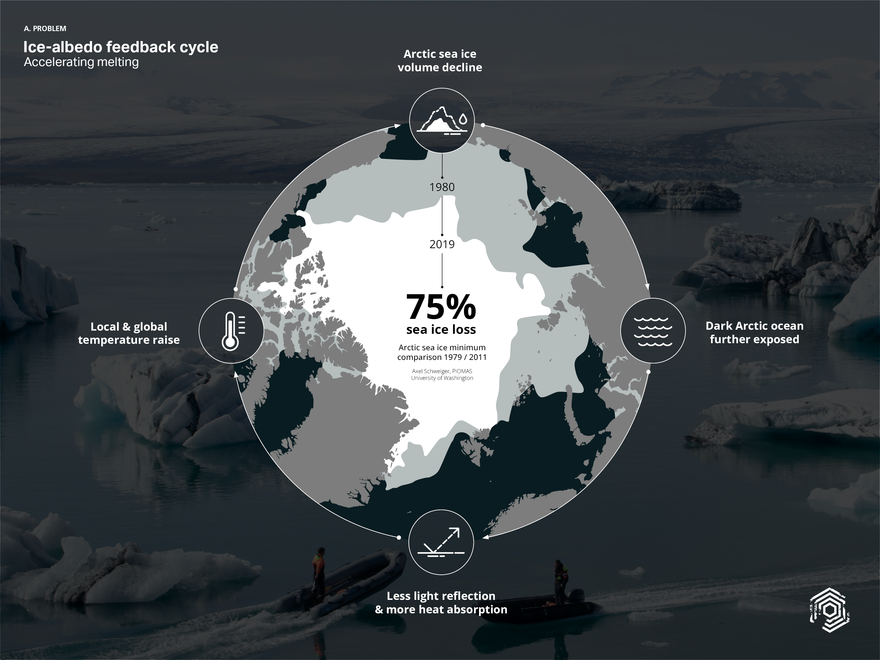 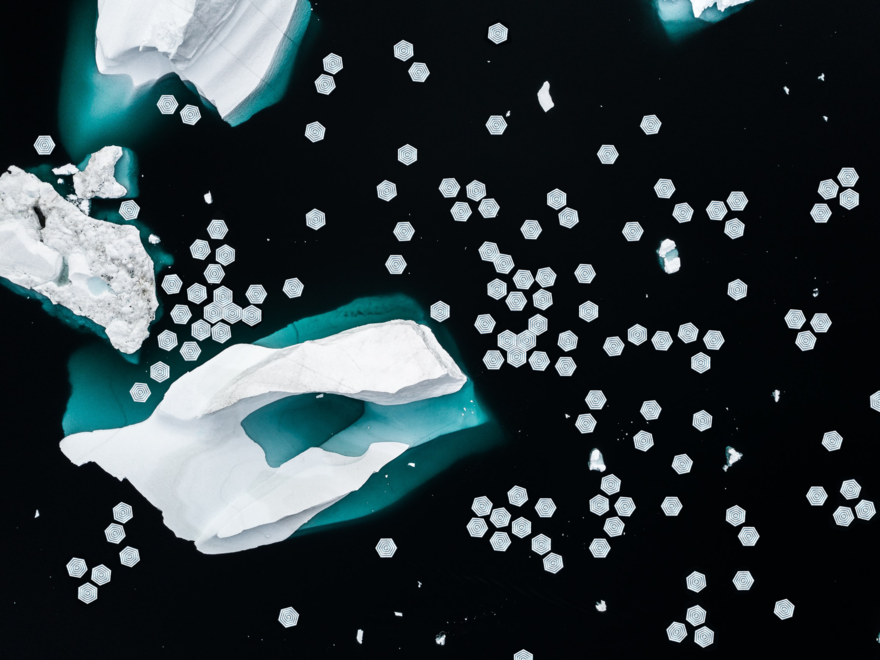 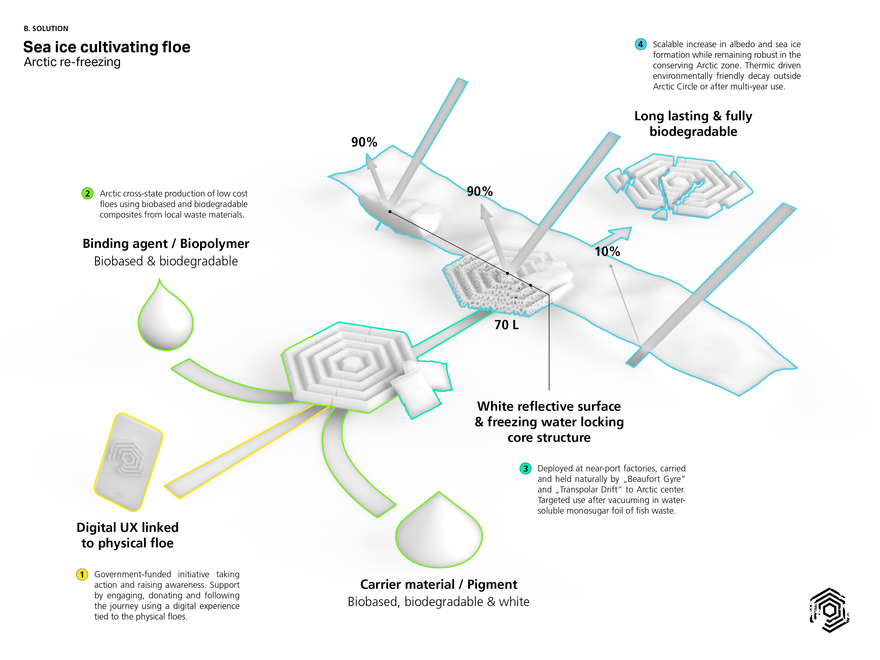 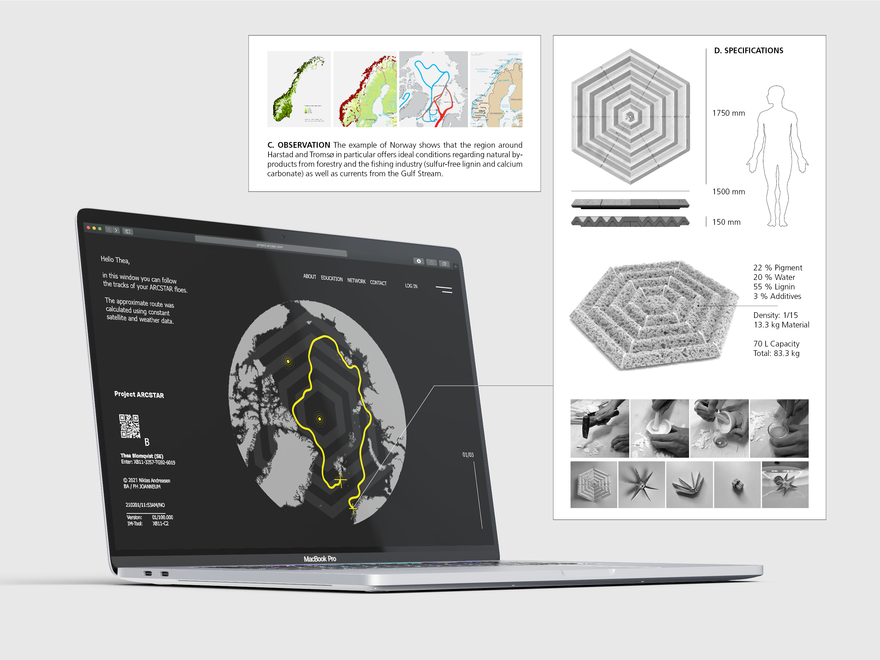 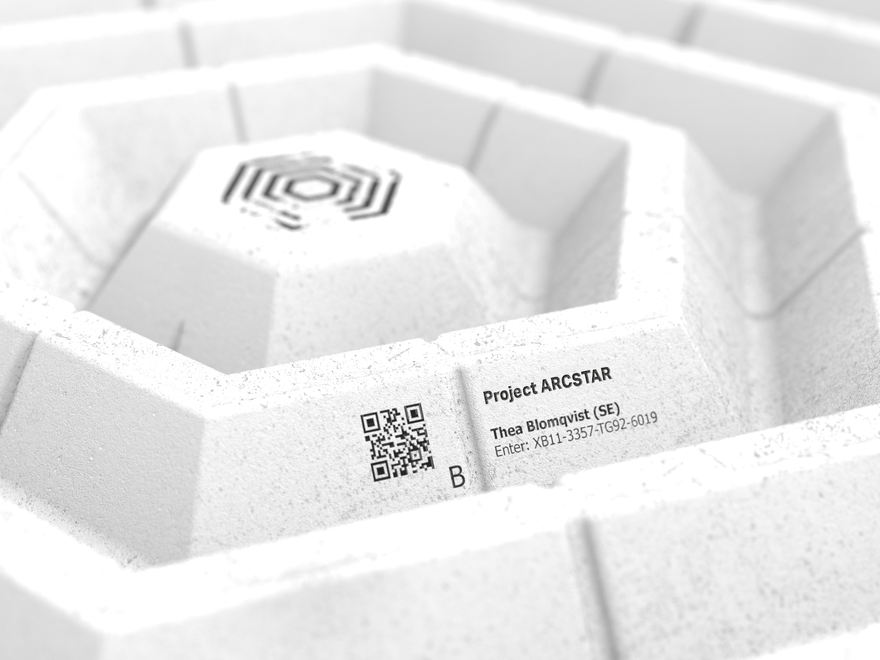 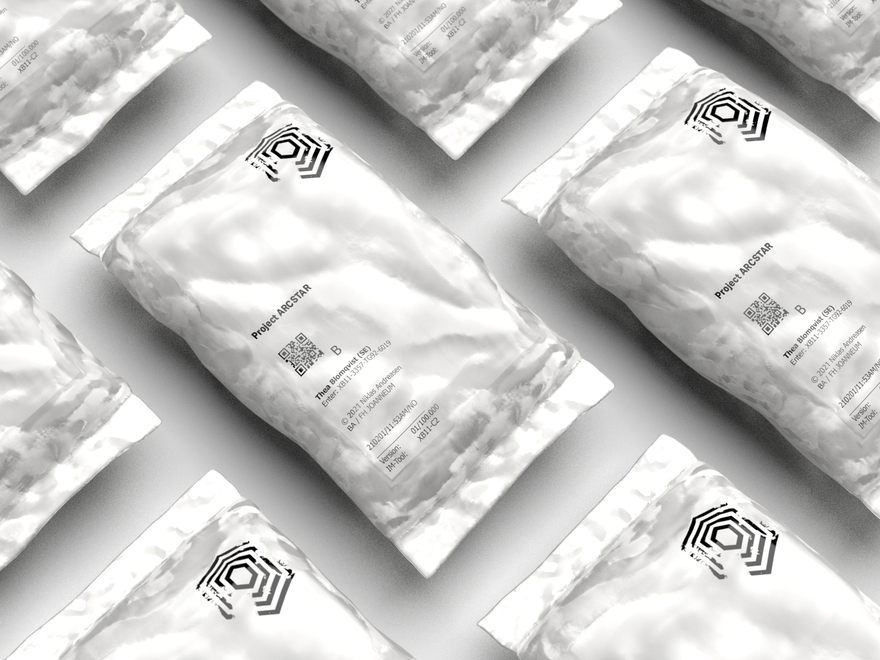 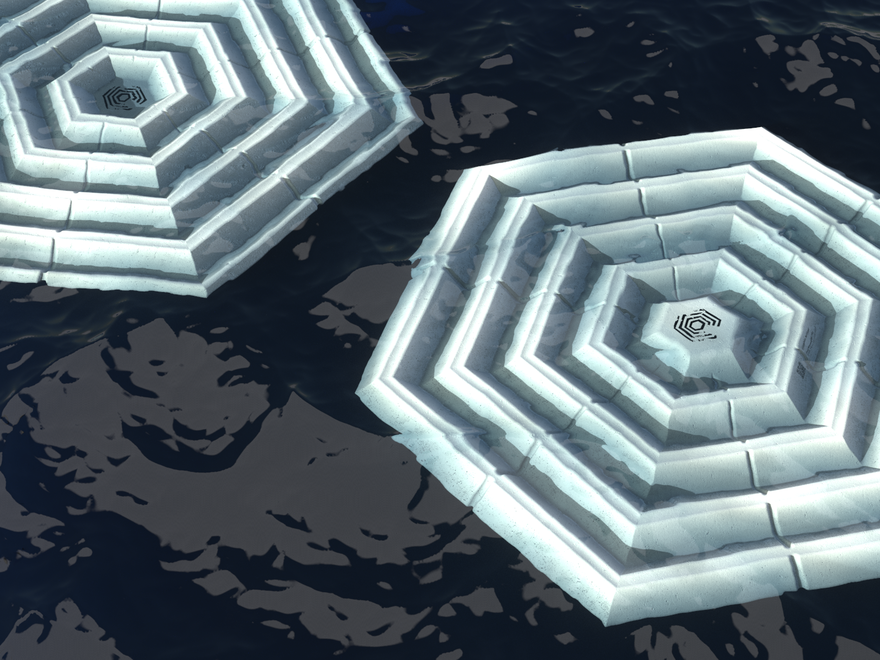 As the thirteenth Sustainable Development Goal „Climate Action" highlights, human-induced climate change is presenting us with new challenges with increasing frequency. We are feeling its consequences all over the world. While some of the problems are directly visible and tangible, others are progressing in the background without being noticed at first sight.

One such distant yet essential and much discussed issue is the melting sea ice in the Arctic.

Arctic sea ice not only secures a globally embedded, self-sustaining ecosystem, habitat and food source, but at the same time serves beside the Atlantic as the engine of our global climate. The direct influence of the ice on the temperature, pressure and salinity differences of the Gulf and Jet Streams significantly determines global weather extremes, duration and changes.

Sea ice is a victim of but at the same time one reason for climate change developments. Due to the ice-albedo feedback cycle, the temperature-related progressive loss leads to an acceleration of further melting. This is because the further exposure of deep blue ocean results in less light reflection and more heat absorption, followed by a local and global temperature increase. The scientifically approaching tipping point of Arctic reparability and the destruction or preservation of this complex environment with all its consequences therefore affects all of us and demands our attention.

The non-profit initiative „Project ARCSTAR", addresses this issue by focusing on a physical product that forms a year-round program for the short- and long-term preservation and regeneration of the melting Arctic sea ice.

Goal of this work was to develop an approach to break the positive feedback loop of melting, restore the effects of ice and reduce local warming in the comparatively faster-warming Arctic today. The intention is not to replace nature or to integrate the product in the long term, but to apply it regeneratively, in harmony with its environment and only for as long as necessary. The tangible concept is intended to draw attention to the problem and its cause, to create understanding and to trigger a change in thinking.

Ground Based Albedo Modification (GBAM) is an already widely applied method of Arctic geoengineering that intervenes in natural climate-relevant processes. The goal is to increase reflectivity in a climate favorable way. This is where current solution approaches are already trying to pick up and better protect the ice sheet or artificially stimulate ice formation. Many of the ideas keep hitting limits due to their need for maintenance and renewal processes, too costy resources, technical feasability and their vulnerability by complexity or ecological damage.

With a stronger focus on simplicity and hollistics, as well as unison and sustainability, new innovation potentials were developed after the market analysis. These are specifically the attempt of biomimicing sea ice properties, combined with a wear part approach (release and forget), using sustainable by-products from Arctic economies and a more simple, yet robust and integrative design.

Abstract: The central element of this concept is an artificially produced floe-like swimming body, which by its high number physically covers the water surface of the Arctic Ocean and thus hides the deep blue sea. Due to its white color, it reflects as much sunlight as conventional sea ice and thus increases the average albedo of the Arctic. The channel-like structure of the floe allows water to be absorbed and freeze within the system. Thus, ice loss can be mitigated in a scalable manner.

Interaction: In addition to the educational initiative and the tangible product itself, additional interest is gained through the innovative and interactively networked platform of „Project ARCSTAR". Through a digital experience linked to the physical floes, the journey can be followed or shared at any time, creating a corresponding personal connection, conviction and reach of the project.

Material and desintegration: Taking Norway as an example, a biobased and biodegradable composite is produced from the two local waste materials calcium carbonate from the fishing industry and lignin from the forestry and paper industry. Despite the purely natural raw materials it is characterized in particular by its physical, chemical and biological robustness and corresponding longevity, as well as its strong white coloration. Similar properties can be achieved by a wide variety of bio-based material combinations. Outside the natural and preservative effective range of the Arctic, the blend decomposes material-dependent faster and is designed to dissolve controlled, completely and harm-free after its several years of deployment.

Form and structure: Despite the seemingly low complexity, the symmetrical shape of the floe with its ribbing and perforations provides the maximum surface area and best possible terrain properties with minimal use of materials. Multi-layered, its shape and structure make it particularly light yet strong, capable of folding, storing freezing water and at the same time preventing the permeation of any harmful pollutants. Similar in diameter to offshore buoys, the floe is aesthetically oriented to its surroundings and adapts to the water surface with the help of its flexible structure.

Production and compression: Generally manufacturable worldwide, the artificial floe is sustainably produced locally in the Arctic to save emissions. With individually locally available residual materials, the high production number of injectionmolded foam bodies is divided among the Arctic sub-states and can be finished in just a few steps. Better transportable, the floe can be folded and vacuum packed in a single-sugar package made from fish residues, which dissolves within a few minutes by contact with water, allowing the mold to then star-like unfold.

Distribution and journey: With the help of the Beaufort Gyre and the Transpolar Drift, the highly mobile floe can be launched directly at the production site near the shore and naturally drifted in the right direction by the environmental influences. Due to the compact vacuuming, a land-, water- and air-supported, also target-oriented application is possible. Once deployed, it continuously serves its purpose without needing any assistance and, thanks to environmentally friendly decomposition, does not need to be retrieved. When fully unfolded, the floe cools the Arctic due to its high albedo and the actively freezing water within its structure. Ice preservation and formation are thus actively promoted.