Imagination is a Commons

In 2021 the United Nations Development Programme launched its annual innovation event, under the banner "Development and Its Futures", with a far-reaching conversation about how the global landscape of development could look decades from now. This is huge, significant, and inherently hard to imagine territory. It touches on the fate and fitness of some of our most entrenched and far-reaching institutions: the corporation as a means of organizing economic activity, the role of future generations and other species in making decisions, and even assumptions on which the U.N. itself is built, such as the nation-state as a basis for governing the planet. Our remit from UNDP, to bring vitality and specificity to this sprawling and potentially quite abstract topic through design and futures, was further complicated by the fact that, due to the pandemic, the whole event was to take place online. We created and carried out an experiential futures process that involved interviewing the opening panel members one on one in advance, designing a special artifact from the future for each, inspired by the conversation with them, and then shipping it so that it would physically arrive at their home address the week before the event. No one knew what anyone else had received until the panel started, so they introduced themselves and their ideas about the landscape of development futures to each other, as well as to an audience of hundreds in the U.N. system all over the world, through the portal of this bespoke fragment of a preferred future: a gift simultaneously to them personally, and to the commons of imagination. 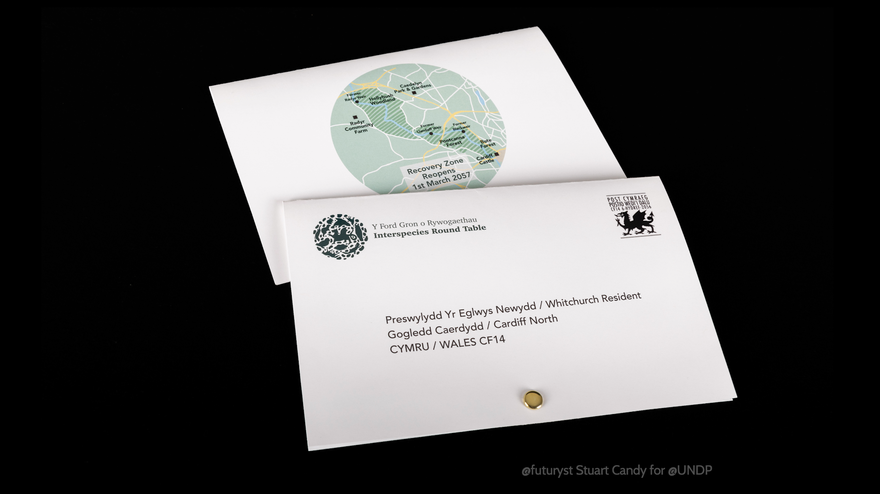 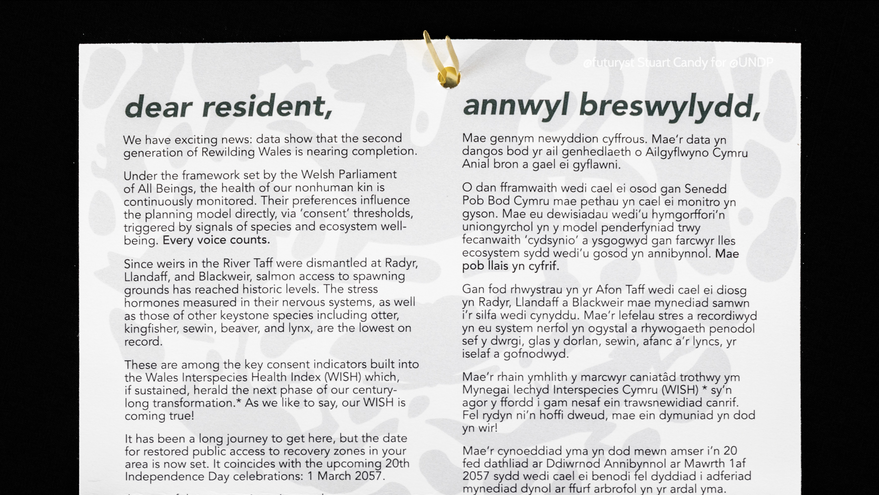 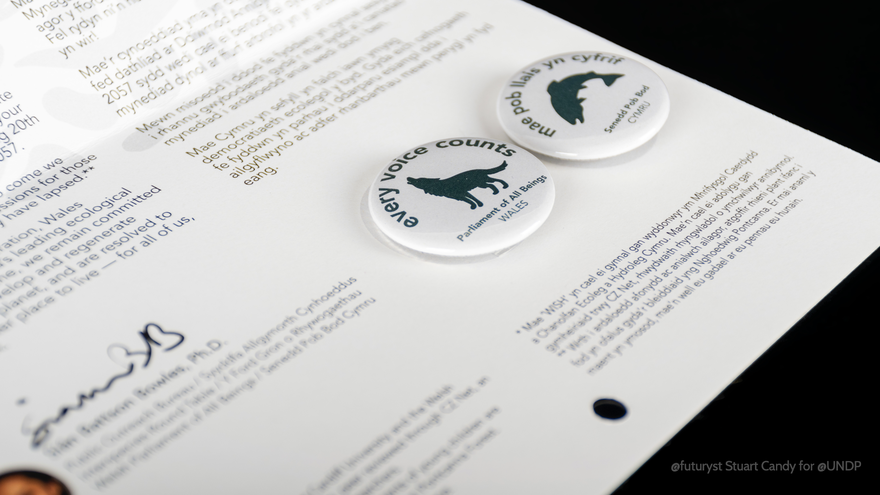 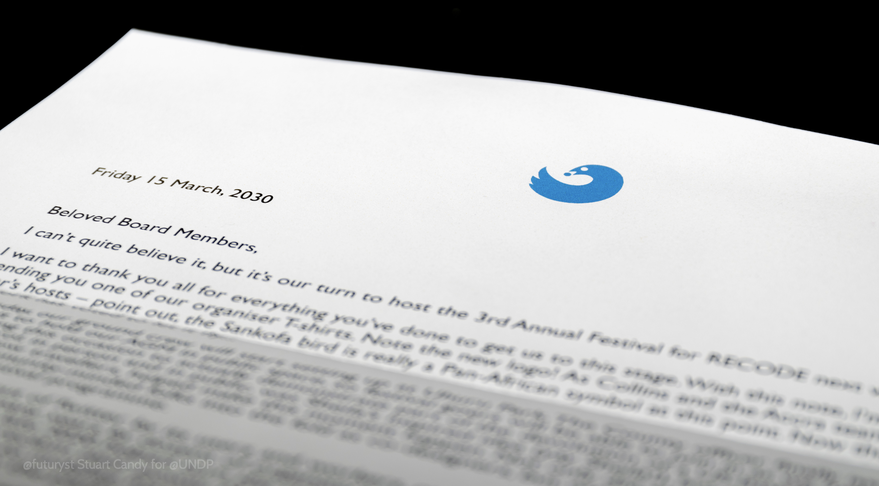 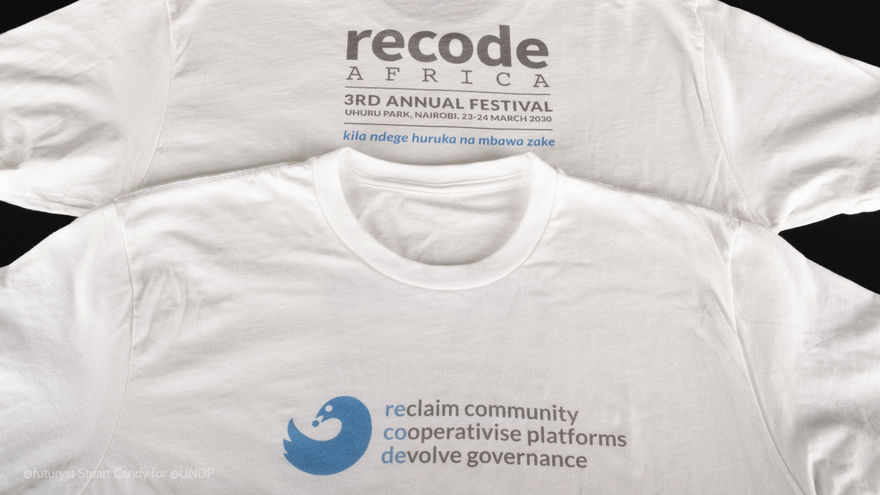 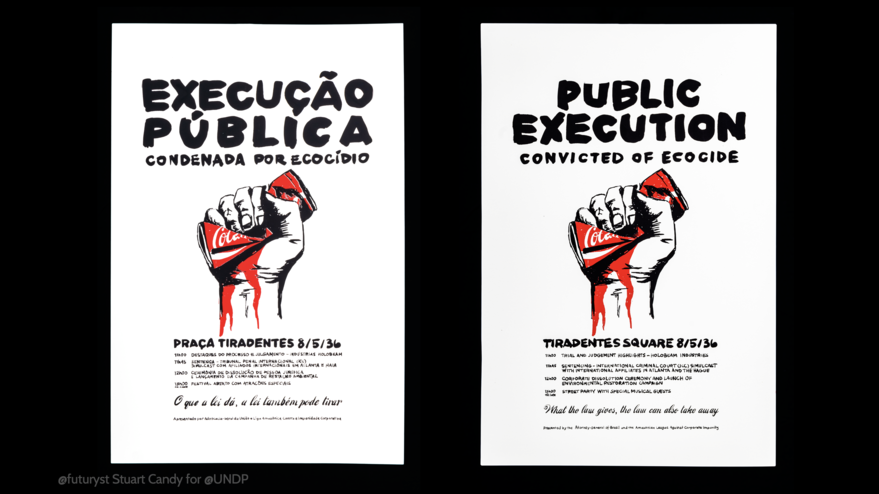 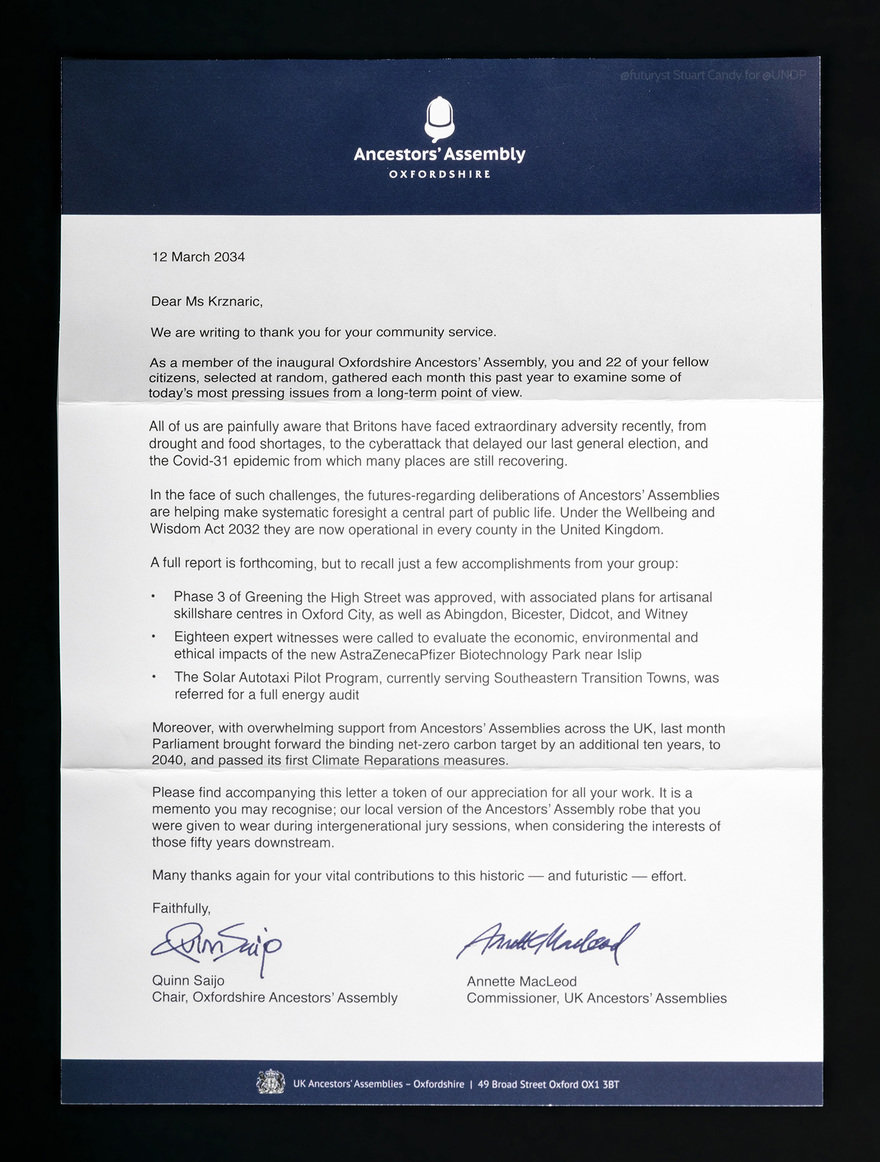 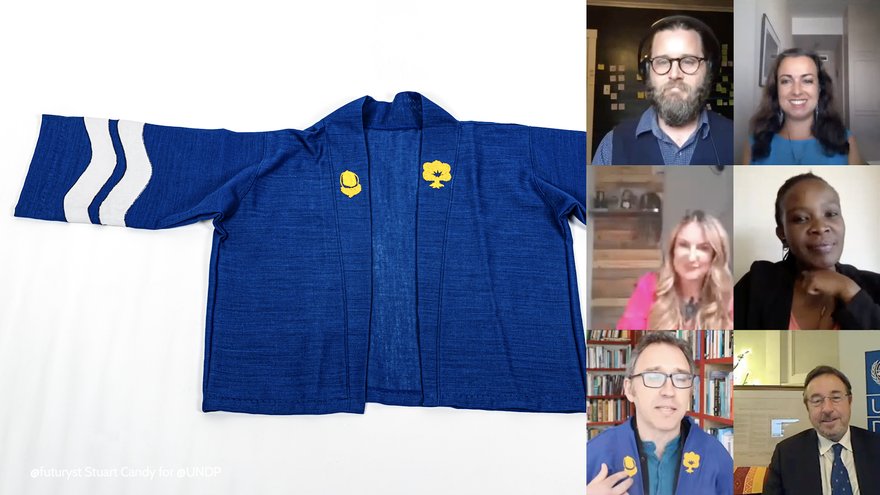 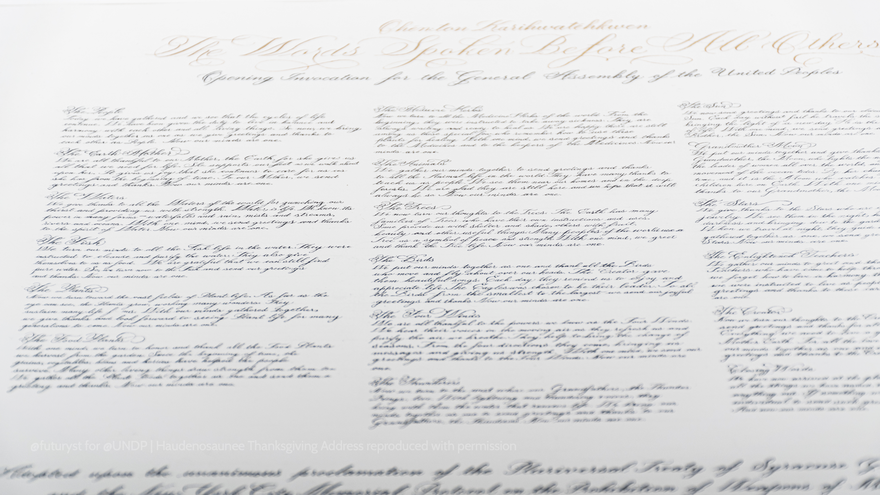 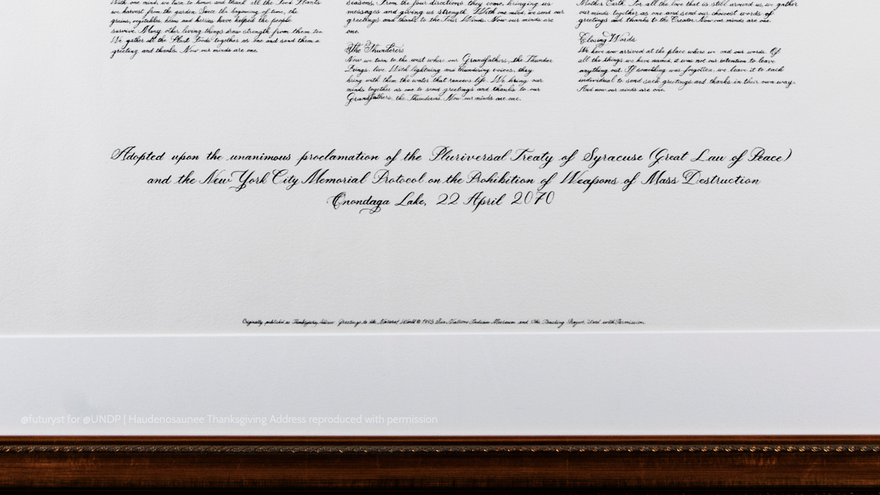 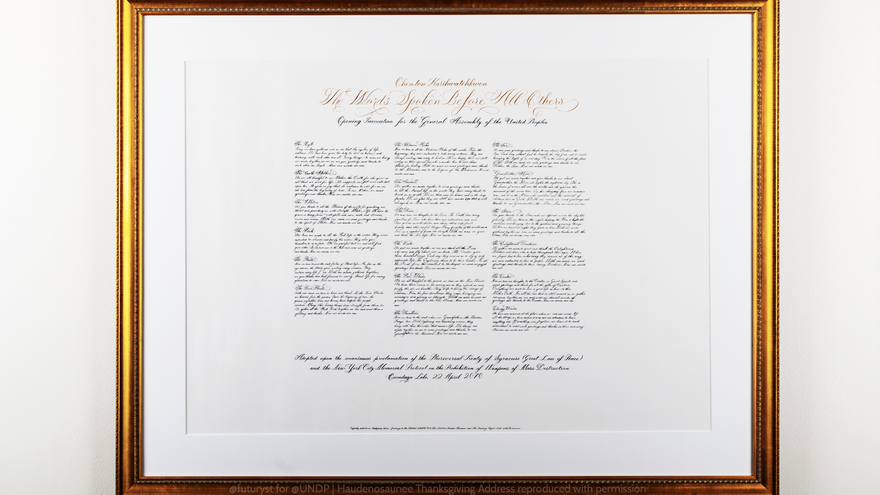 How to use experiential futures to bring a conversation about long-range alternative pathways for global development to life for the U.N. Development Programme?

We interviewed all the panelists one on one in advance, then designed and sent an "artifact from the future" to each, to arrive at their homes the week before the event. Each gift drew inspiration from a seed of a preferred future in the form of a resonant observation, question or turn of phrase that turned up in our pre-conversation. As a whole, the set was curated to explore a range of far-reaching shifts in relationships and power, manifested institutionally, and affecting whatever people mean when they say "development".

There is an inherent tension in the task of making space for new ideas about the future using the fund of existing cultural materials and symbols, because by definition, anything recognizable or intelligible to us in the present also carries some baggage from the past. For each artifact, then, we looked for ways to tie to and resonate with the cultural context, location and background of the recipient, while offering a fragment of a future that would ideally be as meaningful as possible, through their interpretation, for a wider international audience.

The first person in the world to hold this remarkable cross-cutting role, Sophie in our initial conversation emphasized the critical need for a "holistic view" in governance. How then might next-level holistic, inclusive decision-making look, decades from now?

She received a bilingual mailer from the Welsh Parliament of All Beings in 2056, notifying her that animal wellbeing data indicated their consent to move to the next phase of Rewilding in her neighborhood in Cardiff. What were once football fields and golf courses have now had a chance to regenerate into forest, and restored as habitat for species previously displaced by humans.

The "Interspecies Round Table" sending the letter refers to the Knights of the Round Table, traditionally tied to Wales and surrounds. The central symbolism of the round table (y Ford Gron in Welsh) was that the knights met as equals. In this future, then, the Parliament of All Beings has sought ways for our nonhuman kin to have their say in decisions affecting them –– hence the slogan, "Every voice counts"; "Mae pob llais yn cyfrif".

In conversation, Nanjira noted the absurdity of a few Silicon Valley "tech bros" ruling social media platforms that mediate our relationships all around the world, noting "the dream to democratise, decentralise" and "take on the giants".

At home in Nairobi, she received a letter written to her as a Board Member for RECODE Africa (REclaim community, COoperativise platforms, DEvolve governance), with a T-shirt for its 3rd Annual Festival in 2030, after Twitter ownership has been taken over by users and workers. The Swahili text on the t-shirt is a proverb in Kenya that translates to "Every bird flies with its own wings."

The blue RECODE logo references a mythical creature, the Sankofa bird, originating with the Akan peoples of Ghana, but now widely used and recognized as a pan-African symbol. The Sankofa bird flies forward while looking backward with an egg –– an emblem of something in the past that has been retrieved for the sake of the future (in this case, perhaps, the prehistory of Twitter as a non-commercial, peer-to-peer platform). The RECODE icon is therefore a symbolic recombination of the Sankofa bird and the Twitter logo.

In our conversation, the author of the recently published book The Good Ancestor highlighted the importance of "political innovation" dealing with the "decision making structures" underpinning development at all levels. So what might such transformational change look like on the ground?

To his home base in Oxford, we sent a thank you for service in the 2032 Oxfordshire Ancestors' Assembly, and a robe as ritually worn by participants when deliberating the potential impacts of their decisions on future generations. While the name is our own invention, both the "Ancestors' Assembly" concept and the robe for participants are modeled on Japan's recently developed "Future Design" process, which Roman discusses in his book as an example of forward-looking governance that other places could learn from.

The robe's embroidery references the Oxfordshire flag, which includes an oak tree, as well as Roman's book cover, which features the acorn as a symbol of long-term thinking and responsibility. With permission (secretly obtained behind the scenes from his wife), we addressed the thank you letter and robe not to him, but to his currently teen-aged daughter, who will be in her mid-twenties by the time of this imagined future; thereby bringing the next generation directly into the story.

4. Marcela Sabino, Head of Innovation at Museu do Amanhã, Brazil

In our conversation, Marcela, who leads innovation for Brazil's "Museum of Tomorrow", evoked a future in which we relate to corporate entities as legal persons very differently: "Companies have to be held accountable for what they're doing." The question becomes –– how?

In the scenario that we imagined on this basis, the International Criminal Court's remit extends to prosecuting ecocide. Guilty corporations can be executed or dissolved for running afoul of their environmental obligations.

At home in Rio de Janeiro, then, Marcela received a screenprinted poster, one in Portuguese and one in English, advertising the public execution of a corporation in 2036 that has been convicted of ecocide. As per the saying of the time, "What the law gives, the law can also take away."

In our conversation, the UNDP head observed that by the later 21st century what we currently know as the United Nations "will have to be significantly different. . . . But the fact that we will need a governance platform on which to come together is absolutely essential."

At home in New York City, he received a hand-calligraphed copy of "The Words Spoken Before All Others", aka the Haudenosaunee Thanksgiving Address, adopted in a ceremony at Onondaga Lake as the Opening Invocation for the General Assembly of the United Peoples, on 22 April 2070.

The Haudenosaunee, which is the preferred name of the group once called the Iroquois by Europeans, are well known for the strikingly farsighted "seventh generation principle"; considering the impact of any major decision on the seven generations to come. Imagining in this spirit, we obtained permission to use the English translation of the ancient "Words Spoken Before All Others" as part of an imagined future where, one hundred years after the first Earth Day, this millennium-long tradition of ritually acknowledging and giving thanks to the natural world has entered the practices of governance more widely. This concept also mobilizes a line of future thinking offered in Robin Wall Kimmerer's extraordinary book "Braiding Sweetgrass".

The conversation revolving around thee futures with these participants took place on 23 March 2021, and can be found here.

Design fiction, and speculative works often foreground the imaginaries of the designer/artist. This project tried to put the entire creative process in service of lending visibility and gravitas to the imaginings of people with valuable things to say about the possibilities of a domain relevant to every human being. Working with processes that more directly serve the shared fund of the imaginable –– the future as commons, as the Indian scholar Shiv Visvanathan memorably puts it –– is, we believe, critical to this family of practices making more constructive contributions to the worlds that we go on to make together.