Kintsugi Upgrades is an NFT collection that uses the Japanese mending technique called kintsugi to combine medieval and post classical artifacts with high-tech fixtures to create a product that exists for a purely digital realm. Kintsugi is the art of repairing broken pottery by adhering the pieces back together and dusting the cracks with gold powder. The result is an entirely unique creation that is functional once again, but in the case of Kintsugi Upgrades, the original functionality has completely changed.

The Kintsugi Upgrades collection was initially inspired by ancient artifacts found in the Minneapolis Institute of Art and Malopolska's Virtual Museums. Imagining an ancient world revived with modern technology has been a driving theme in our NFT series. As technology for virtual reality and the metaverse grows more potent, Kintsugi Upgrades is made to represent a clash of the old and the new but ultimately works in service of the future by creating objects that will populate virtual worlds.

One of our goals with this NFT series is to capture the tension between democratizing digital spaces and the unique ability to own and possess digital assets. Each NFT is modeled after a real-world artifact that has been digitally scanned and uploaded online. We then artificially shattered the digital renderings to create a new object with upgraded capabilities that could only exist in the metaverse. While the core utility of the object still serves a purpose, like vases and water containers, the technology required to elevate their functionality is still far from reality. The metaverse will be fraught with these types of challenges, determining what is accessible and what is exclusive in a purely virtual form.

Innovation is a core value of our design studio so we have begun designing for a virtual world that is soon to be our future. Our NFTs are a way to show the innovation behind turning physical assets into digital commodities. They also serve to show the plausibility of transitioning more of our lives from the physical world into the digital. 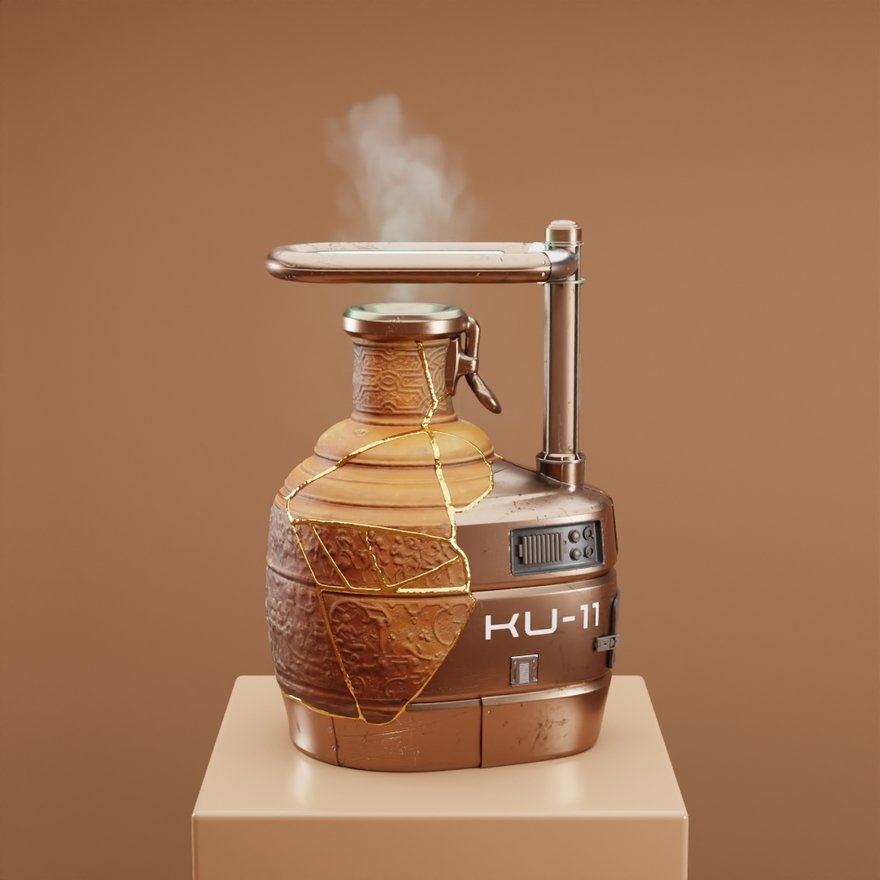 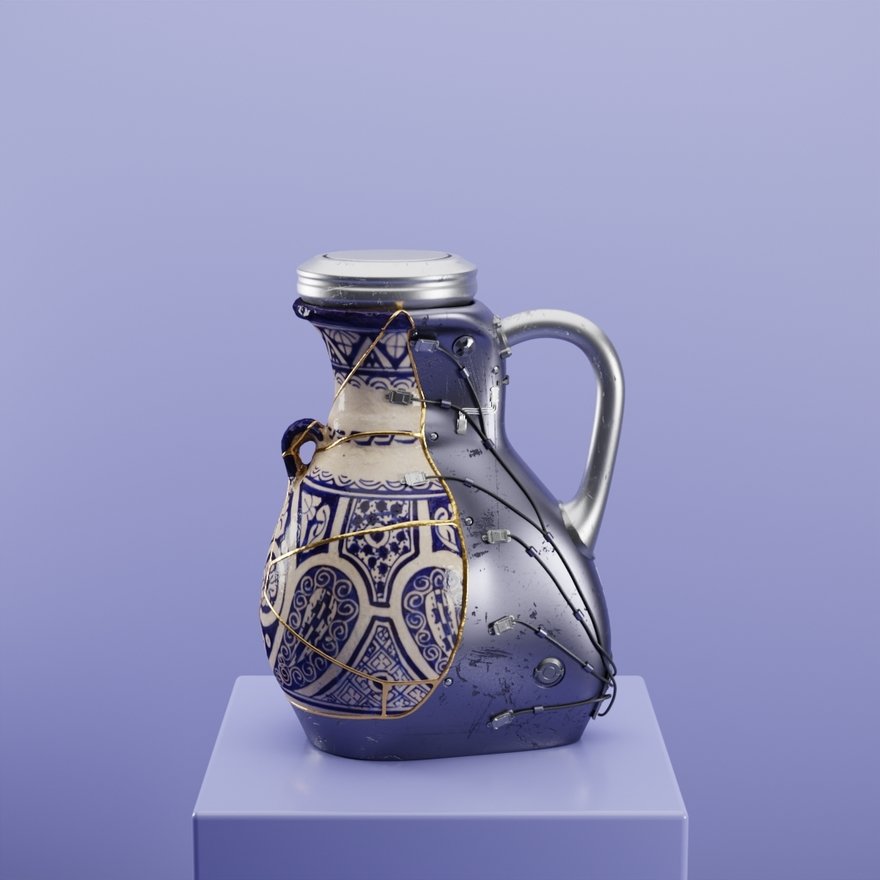 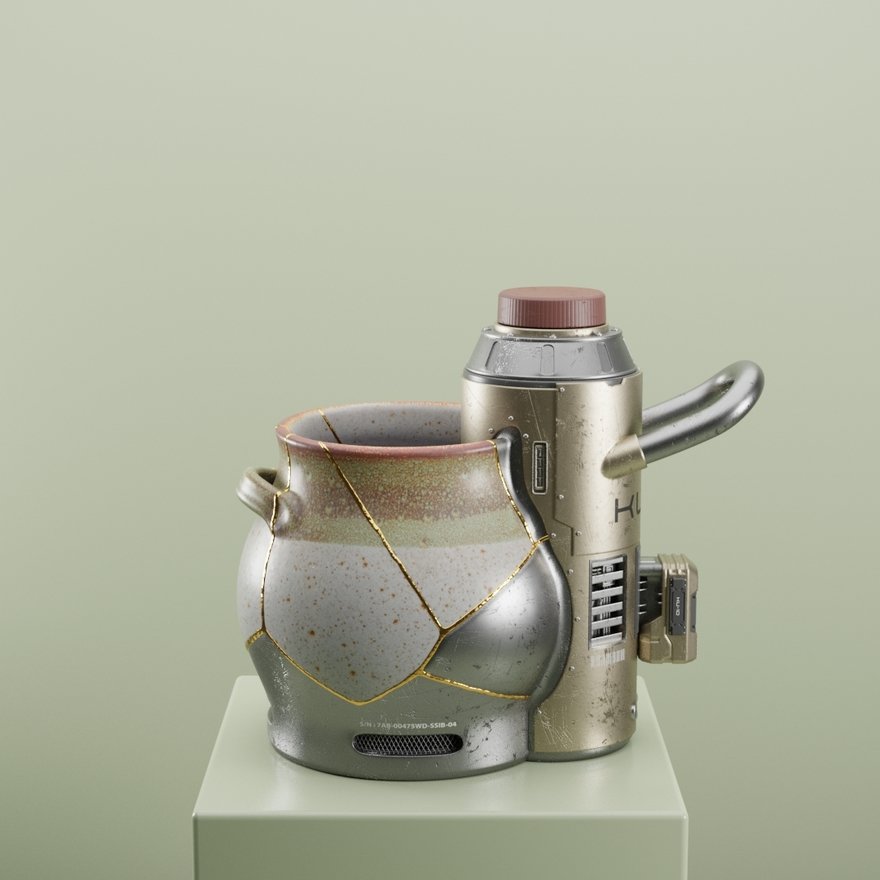 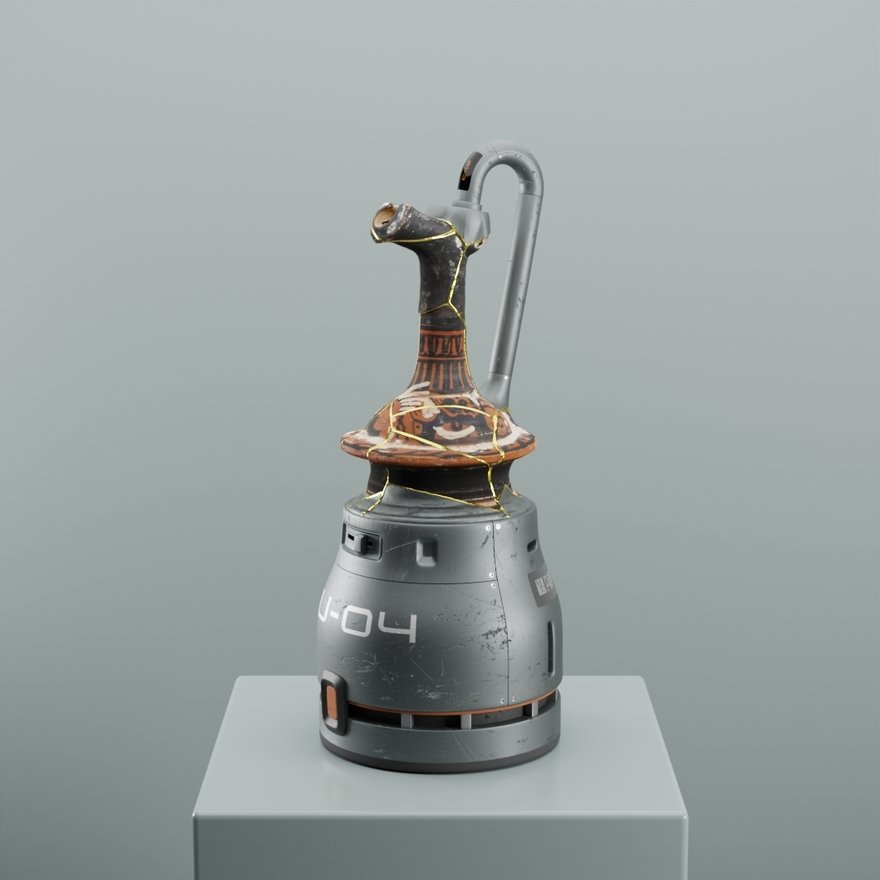 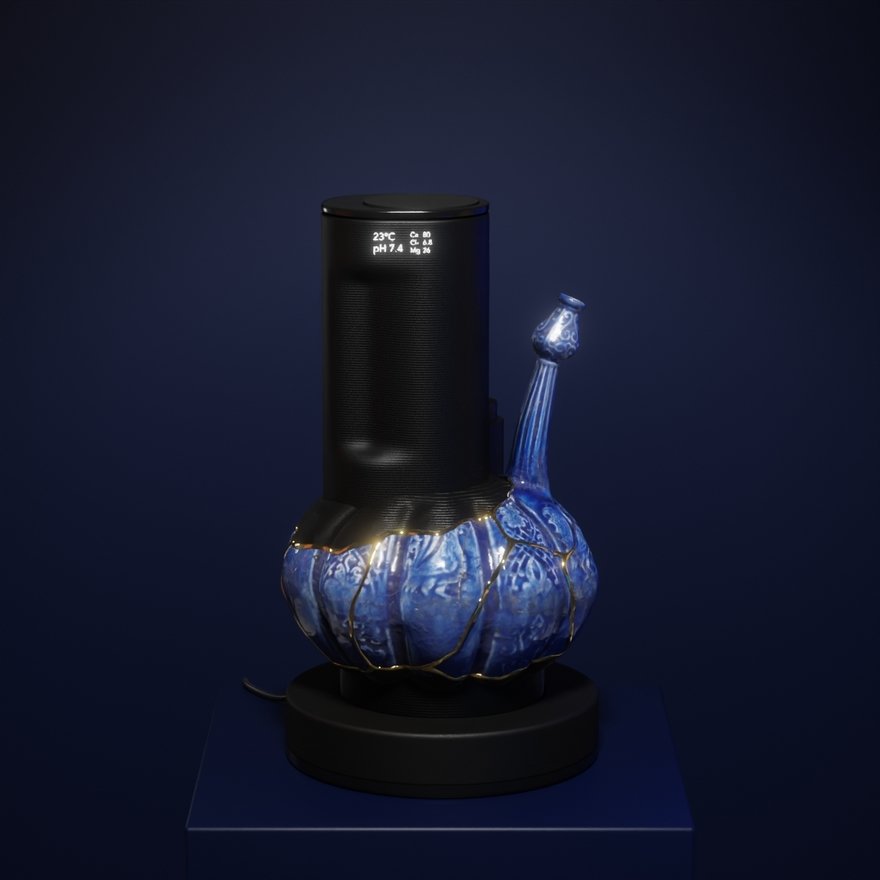 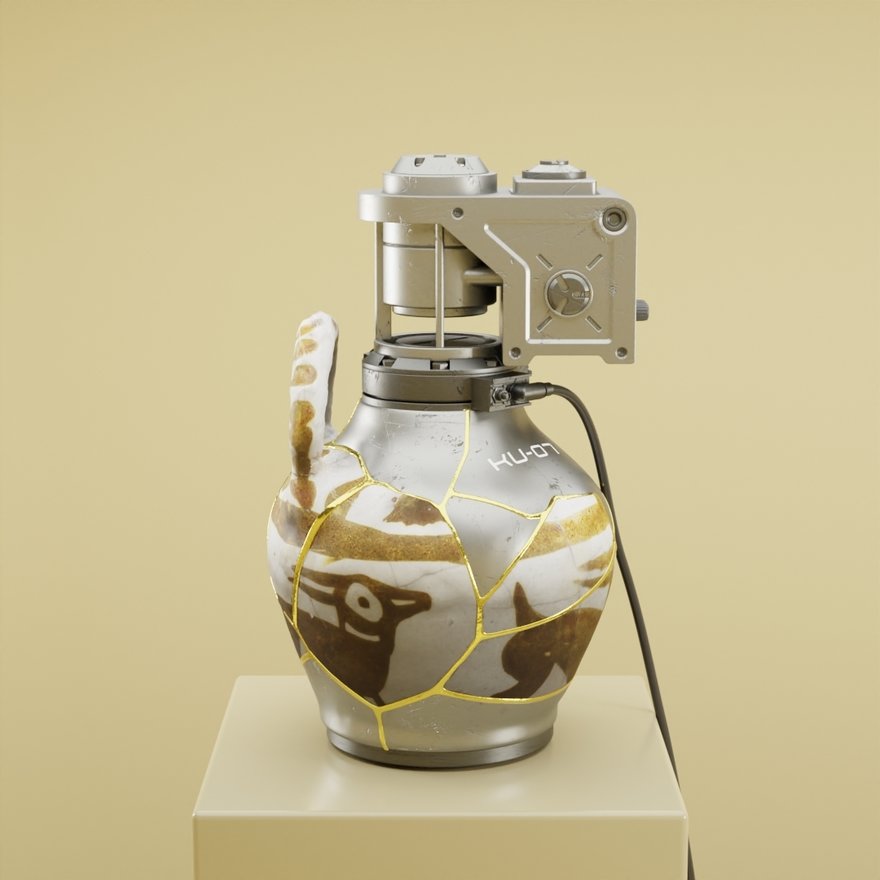 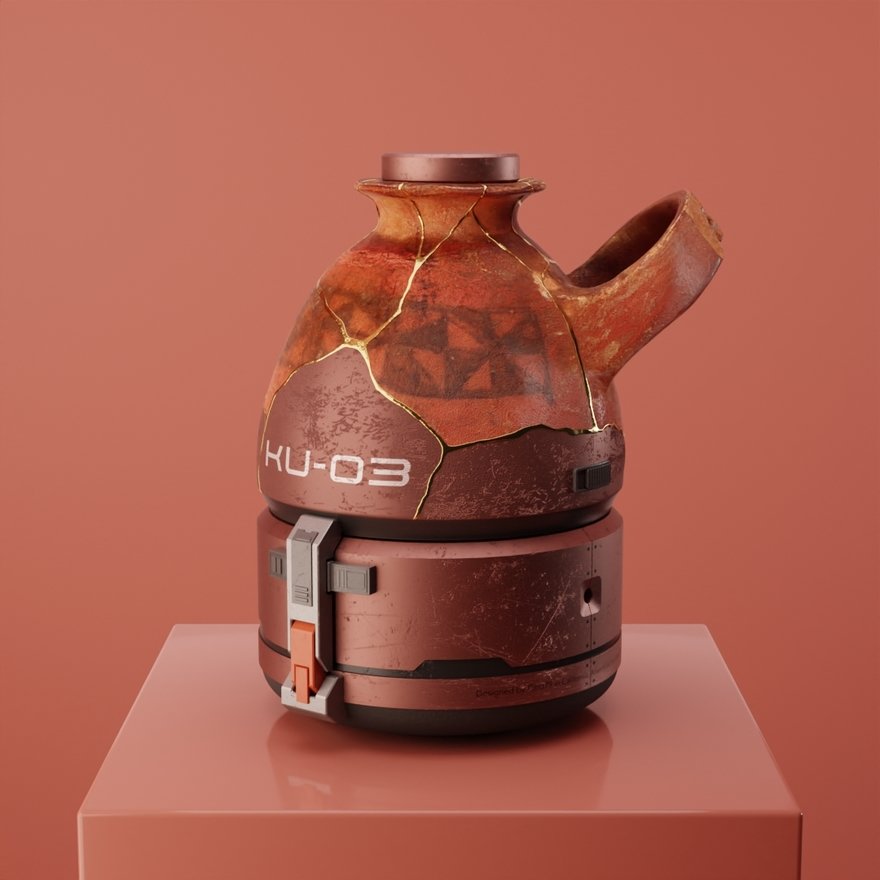 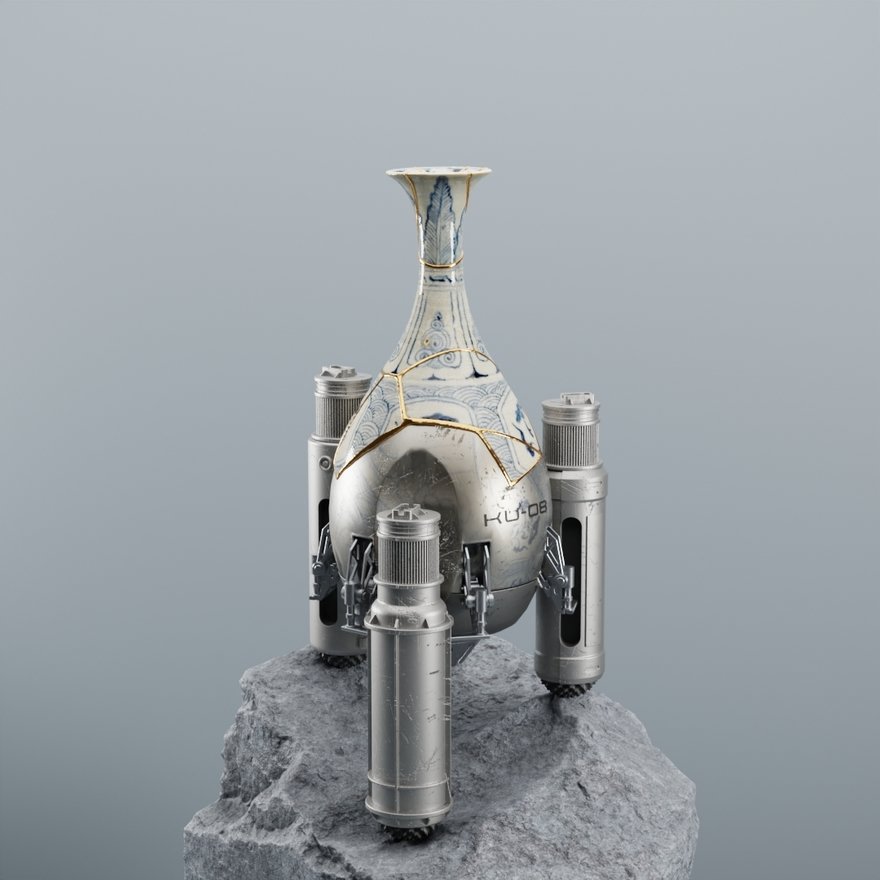 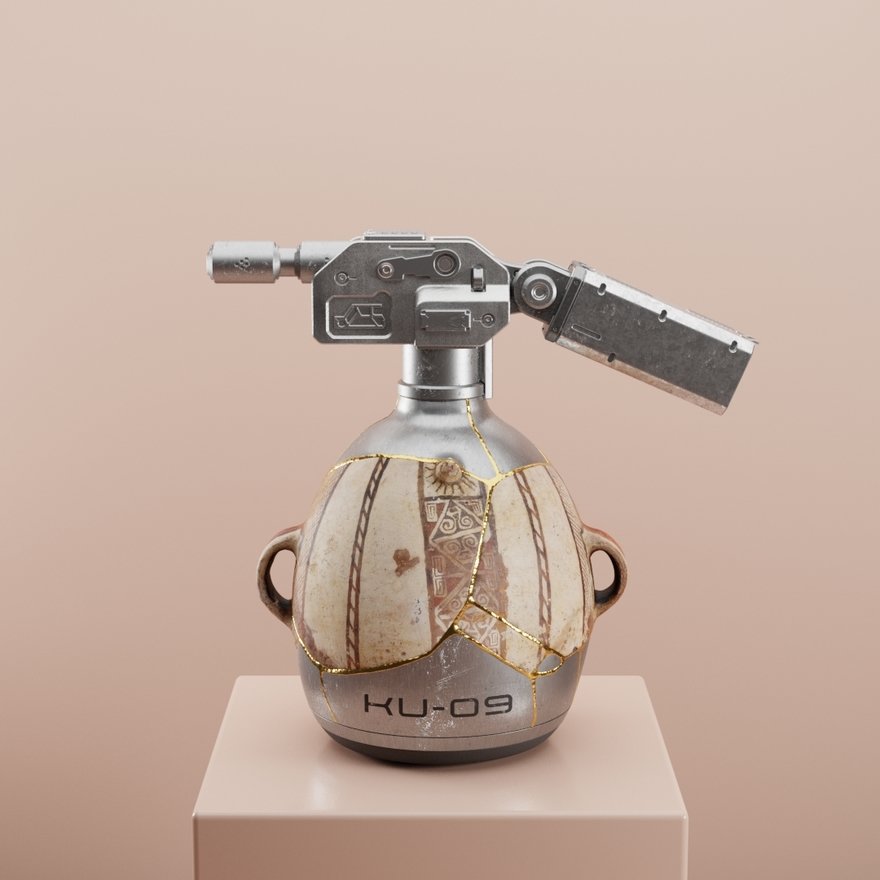 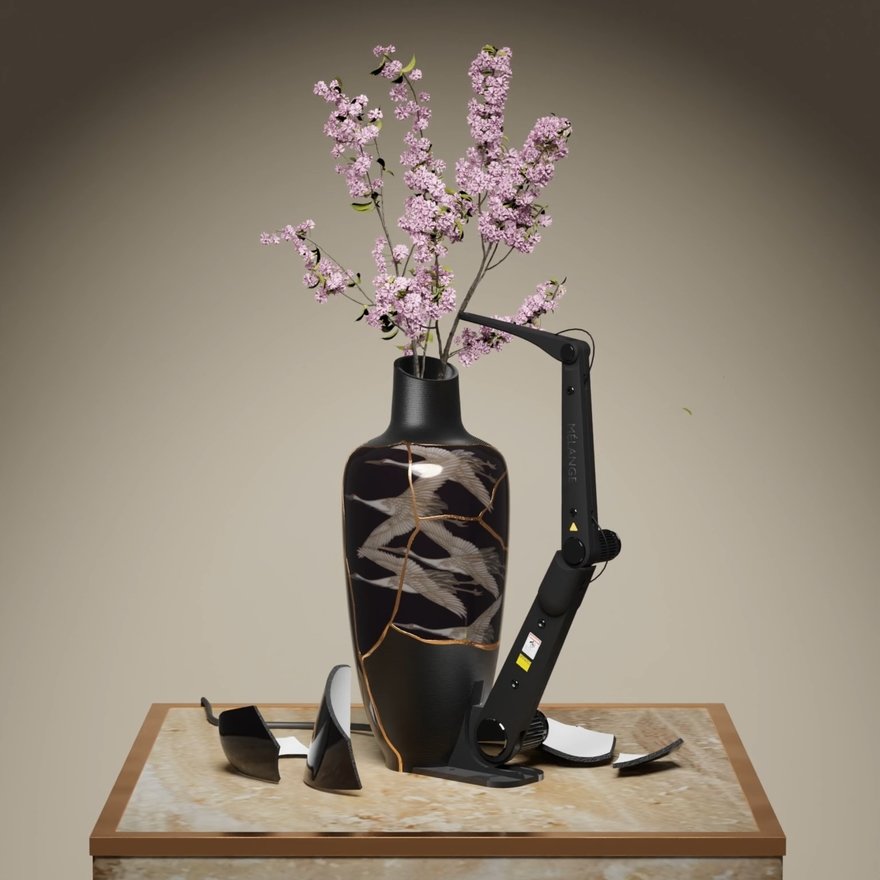 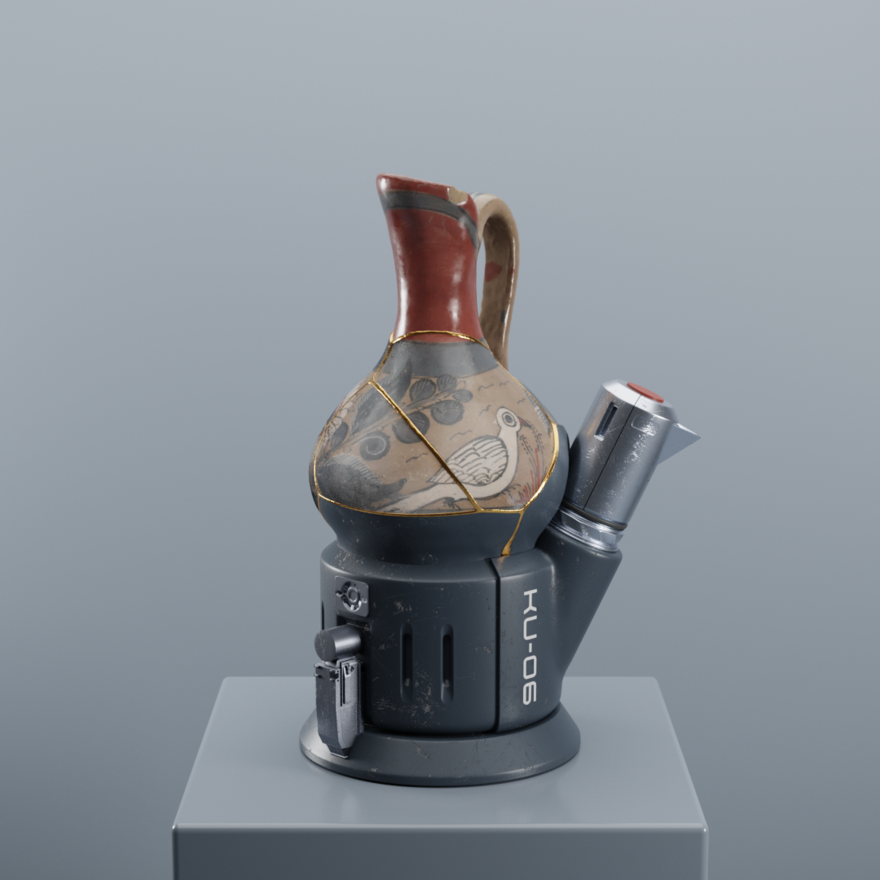 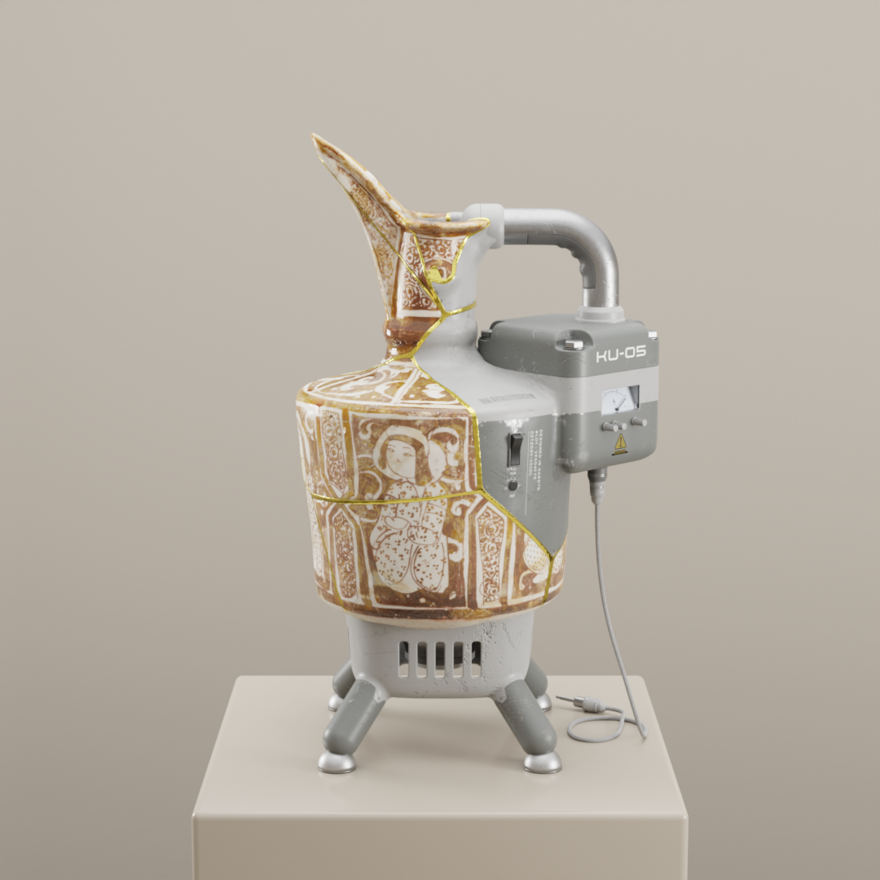 Card79 strongly believes in innovation and the importance of adapting to new markets and finding new ways of reaching people. As early adopters to the tech space, the development of NFTs is in line with Card79's history and values of supporting new innovations. Imagining ourselves utilizing VR and AR headsets, preparing for an existence within the metaverse is why we created Kintsugi Upgrades.

The purpose of Kintsugi Upgrades is to help old products find new functions. Many of the original artifacts served some form of domestic purpose, like vases, water jugs, and food containers. By transitioning these artifacts into the digital realm through their kintsugi upgrades, they can no longer serve the same functional purposes as their real world counterparts. To mediate this tension, we designed each NFT to retain some aspect of a functional purpose, even in the metaverse. There is no current plan to create these NFTs as physical objects because the technology required to create them is not yet possible. For this reason, they remain confined to the metaverse.

Still, envisioning this series of objects as part of the metaverse and as digital artifacts is something that truly excites us. There is a certain tension between the metaverse and NFT marketplace despite both being hosted in digital spaces. The metaverse is quickly evolving and is being positioned as a new platform for exploring physical spaces which has already begun with workplaces, museums, and even classrooms. While this signals a growing accessibility to the metaverse, there is still a sense of exclusivity that is created through the ownership of digital assets like NFTs and the blockchain. We speculate that this phenomenon will translate deeper into how designers will approach creating exclusive objects for the metaverse. Furniture, for instance, will need to be designed for the metaverse if we hope to retain some familiar qualities of the real world. There will likely be a divide between free, accessible objects within the metaverse and exclusive objects like NFTs. People will likely encourage private collections of other exclusive digital items as well. Kintsugi Upgrades represent that transition from accessibility to exclusivity, despite everything being online.

While designing our NFT series, we worked collaboratively with our international team of designers to create each NFT in Gravity Sketch's virtual collaboration platform.The experience was an exercise in functioning within the metaverse already as the workspace was in a purely digital, three dimensional realm. Every NFT is based on a digitally scanned artifact that exists in a physical museum. We artificially shattered each object so that they could be reassembled with a new futuristic function. Our designers created these NFTs with the idea that in the future, the NFTs themselves would be relics of a past civilization. While the capabilities of each NFT are out of reach in the current day, we imagined that these artifacts would be seen as outdated technology by the time they were "discovered."

The opportunity to select ancient artifacts and reinterpret them through a technologically enhanced lens creates an innovation process of its own. Our team moved between scouring the web for archival 3d scans to shattering and rebuilding them collaboratively in VR in gravity sketch and then carryout out design refinements in Blender. The digital assets are designed with a futuristic approach and are upgraded from the original artifacts. Themes which revolve around the NFTs are the concept of "Futurism" or a "Sci-fi World" which is reflected in this series of NFTs.

To give some insight into what the designers were thinking while choosing what story to tell through their NFTs, we will look at several examples that exemplify their goal of blending past beauty with future functionality. KU11: Caligo, for example, is based on a post classical vase that depicted the biblical story of David and Abigail. The artifact has a religious and spiritual aura which we attempted to convey through its new diffuser attachment as a way to create a calming environment.

Their names are also chosen with the intention of retaining part of the object's past identity while also referencing the new upgrade. KU10: Azote is named for its new function that utilizes nitrogen. Azote is another word for nitrogen, although outdated, and the functionality of KU10 involves extracting nitrogen from the air and compressing it into liquid nitrogen that can be used to preserve and freeze food. Another example is KU06: Botellones whose original artifact was a water container, or a botellones de agua, which we attempted to recapture in the upgraded version. KU06 builds off of the original utility by introducing nutrient supplements into the water container.

Kintsugi Upgrades attempts to define the design of the future and the metaverse by adapting old, familiar objects into unrecognizable ones. The KU series of NFTs meets design at a time where the physical world is slowly transitioning to virtual reality which emphasizes the necessity to think ahead to the needs of the metaverse.