The year is 2052 on the Great Plains of Eastern Hungary. In the wake of the early 21st century's ecological collapse, a traditional and beloved product of the land, honey, has been lost, due in part to the disappearance of bees. Botond Levente Kiss (53), a lapsed industrial designer, returns to his hometown with the hopes of starting a cricket farm, but in the process finds a market gap that could serve as a solution to the lost culture of honey. Australian honeypot ants are ready to save Central European gastronomy. 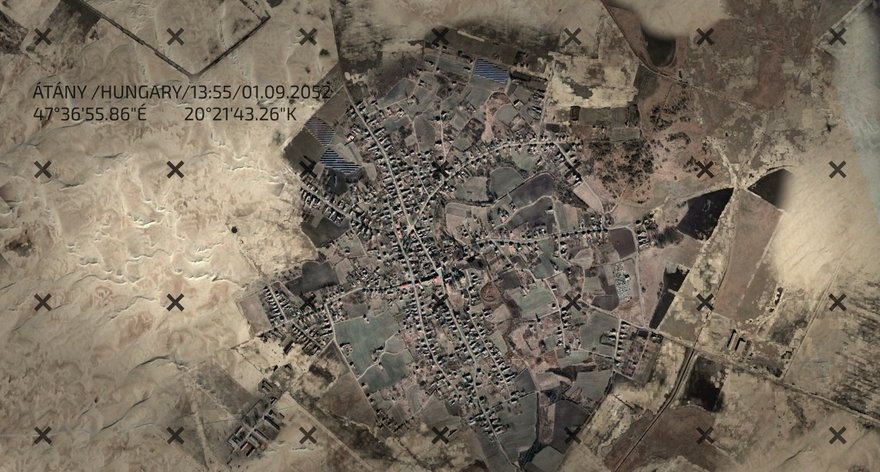 Satellite imagery of Átány, 2052 The effects of climate change are visible in the arid environment surrounding the village. 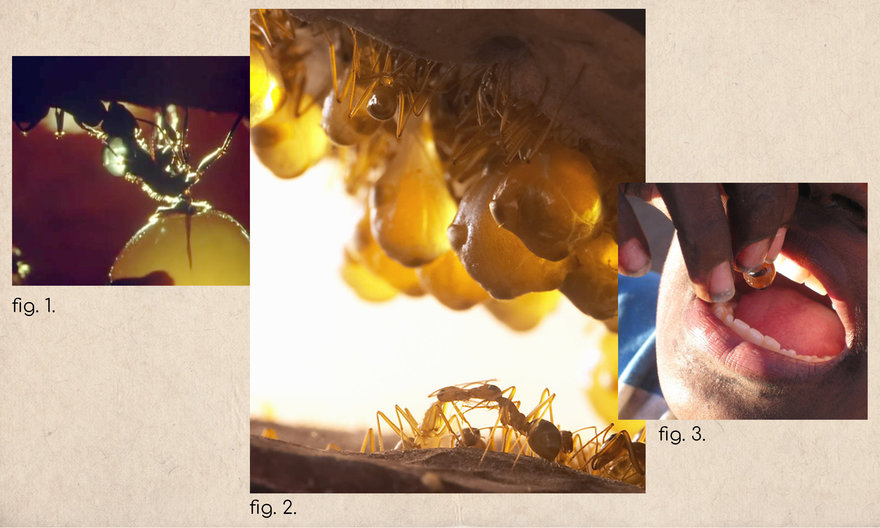 Honeypot ants (fig. 1.) A worker ant is seen feeding a replete in a process called trophallaxis. (fig. 2.) The swollen repletes hang from the ceiling of the tunnels. (fig. 3.) Honeypot ants have been one of the few sources of sugar for some aboriginal people for millenia.

The honey farm The farm is built on the remains of Soviet-era producer coop infrastructure.

Feeding the colonies Like with bees, what the ants are fed influences the taste of the honey they produce. 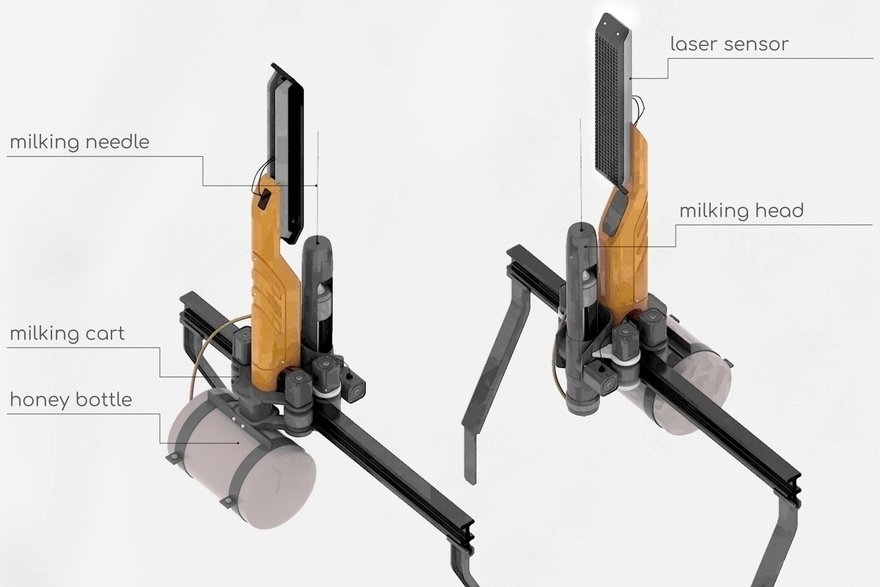 Robotic milking system The machine is built with off-shelf and custom parts. In this version, the honey canister has to be replaced manually. 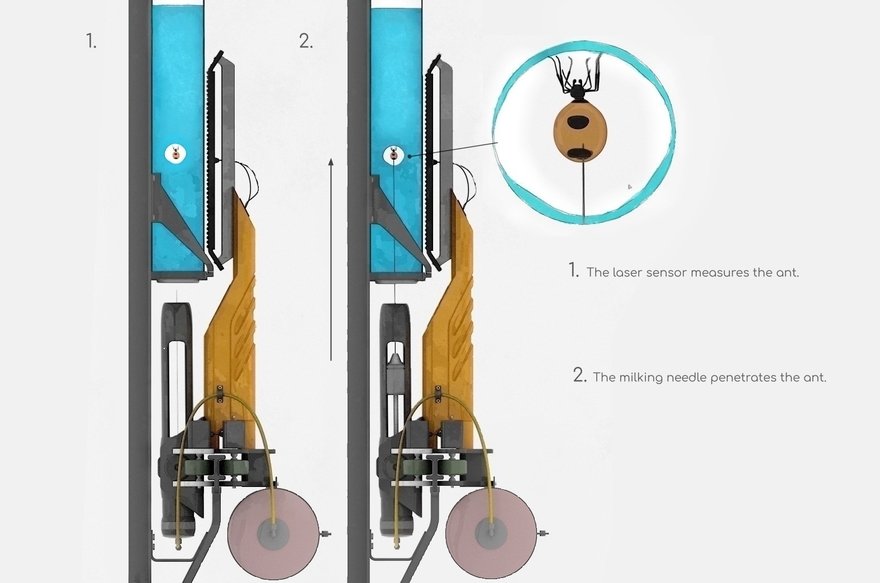 Replete milking process A microscopic needle penetrates the abdomen to extract the nectar. The process is harmless for the ant.

Close-up of repletes As in the wild, the immobile repletes hang upside down in the tunnels of the nest.

Distribution yard The trucks are ready to carry out a supply of ant honey to the market. 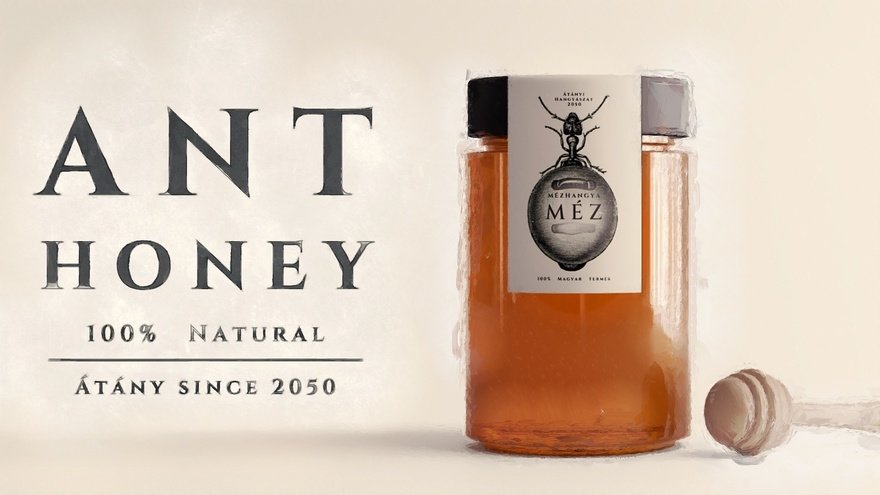 A jar of ant honey An unexpected, all-natural substitute for bee honey.

After Apiaries is a speculative project that was conceived during a semester course at the Moholy-Nagy University of Art and Design, Budapest, Hungary. Students explored the expected transformation of our natural environment (+3°C) and the closely related economic transformation to channel their associated fears, desires and interests into possible future scenarios. Taking place around the year 2050, when the IPCC goal of carbon neutrality has been reached, Hungary's environment has changed drastically as a result of climate change. This, of course, has had a serious impact on the direction of social and technological development. In this fact-based new world, students imagined a local business, strictly related to a specific region of Hungary to reflect on the local, sociocultural effects of a global environmental phenomenon. Since the semester took place online, their designs of imaginary products and services were presented through digital artefacts.

The anticipated effects of climate change are often illustrated through the extremes; arctic ice melting, coastal cities flooding, tropical coral reefs dying and so on. For somebody in Central Europe, all these can seem vague and distant. The consequences of a climate disaster in such a region are not as obviously extreme, even though life will drastically change in these parts of the world as well. Local impacts of climate change don't recieve enough attention, resulting in ordinary audiences having little connection to this approaching, but still abstract future. It is difficult to identify with these concepts on a personal, everyday level. Additionally, most contemporary discourse about the future is full of submissive pessimism, putting what little hope still exists only into technological advancements. What can be done about this?

The goal of the course was to create future scenarios which are realistic and regional, by accepting the consequences of climate change, but also optimistic, hopeful, and sprinkled with playful humour. It aims to spark optimistic collective dreaming and inspire action, with the help of methods used in speculative design and design fiction.

With these intentions, a personal starting point was chosen for the project: Átány, the village of my grandparents. Situated on the northern edge of one of Hungary's largest and most important regions, the Great Hungarian Plains, warming temperatures will drastically change the environment as we know it today, turning it from a forested steppe to a savannah or worse, a desert. This, mixed with the global trend of declining bee populations, means that honey, a beloved ingredient of the Hungarian kitchen and dining table, may all but vanish. Culinary traditions are something many people can connect to on a deeply personal level. They serve as one of the main bridges between generations, meaning they can be a good common ground for discourse.

In the story, a future alter ego of myself, burned out from the automotive design industry, moves back to my hometown to live a simpler life, with the plans of starting a cricket farm, a common source of income in rural areas. In the process, I discover the nostalgia-filled market gap caused by the scarcity of honey, as well as a possible solution. The very phenomenon that caused these local issues to begin with, globalism, may also hold the solution in the form of the honeypot ant, a special kind of ant usually found in arid, far away environments like Africa and Australia. In 2022, these are the regions the ants inhabit, but in a future, altered climate, it is possible they could survive in Central European environments as well. Honeypot ants have specialized workers who turn themselves into living larders, called repletes. Gorging on food until their abdomens swell to the size of grapes, the other members of the colony can then extract the stored nourishment through a process called trophallaxis. Once engorged, the repletes become immobile and hang from the ceilings of the nests' tunnels. Some genera of these ants form an occasional part of various indigenous peoples diet. During their travels, even the likes of David Attenborough and Gordon Ramsay have tried this interesting snack.

The design process started with choosing a geographical region of Hungary and defining the main effect of climate change in this environment. Lectures and consultations with an environmental scientist supported the scientific background of these claims. Next, an everyday scenario was found, which exists in today's world, but could also exist in the imaginary world of tomorrow. In my case, this was the gastrocultural experience of honey. After this, a typical business design process was followed, by using a business model canvas adapted to fit the alternative criteria of founding an imaginary business in a future scenario. This started with identifying stakeholders, defining the problem and then the solution (the product), followed by the channels for reaching customers and distributing the product. Key resources and activities were also defined. This approach proved useful in the worldbuilding process as well. Being past the net-zero target year of 2050 meant all economic activity must follow these regulations. This was an important factor in designing the details of the business. An expert specialized in sustainable start-ups assisted us in the process.

In order to tell the story of the imaginary honey farm, I designed an ant „milking" machine, which can milk the swollen, nectar-filled abdomens of the repletes in a minimally invasive way. The robotic harvesting system moves along a track next to the ant farms and uses a sensor to find the ripe repletes. A microscopic needle drains the liquid, which is collected in canisters. Since the climate is just right for the ants, they are left out in the open, living in ant farms filled with a synthetic gel. Food for the colony is added from the top. The honey farm is built on long-abandoned Soviet-era producer coop infrastructure, which is powered by locally collected renewable energy. Once the nectar is extracted, it is packaged and sold at the farmers market or online as an artisanal substitute to bee honey, filling the nostalgic, sweet-toothed hunger of those who crave the tastes of their memories, from a world that no longer exists.

My goal with the project After Apiaries was to bring the looming danger of climate change closer to home, literally, in both a geographical and sentimental sense. I wanted to illustrate how our own, local environment will drastically change in the coming decades, but also demonstrate how we can still have hope. It is possible to find solutions, to adapt, maybe even find some joy in the meantime. We can still have bread with local honey for breakfast and Grandma can still make gingerbread cookies for the holidays. I believe finding a topic that many different audiences can resonate with on an emotional level is key if we want to start discussions about possible and preferable futures. My hope is that through telling provocative stories, we may get one step closer to turning words into action.