Formula 1-year-old is a toy car design cast from baby formula cans. Babies usually wean off formula at 12 months. So the name of this project is a pun while describing the actual form of the toy car at the same time. First, the aluminum from formula cans is melted , then cast into toy cars. Therefore the period when people are not able to build memories can be memorized using a toy in an interesting but meaningful way. After the toy cars are cast, the name and the birthday of the baby can be stamped on later. Then this cast design can function as a toy car when the user is a toddler and later as a souvenir for his or her life when the user grows up. The toy car also uses a minimalist design style to convey a genderless impression. 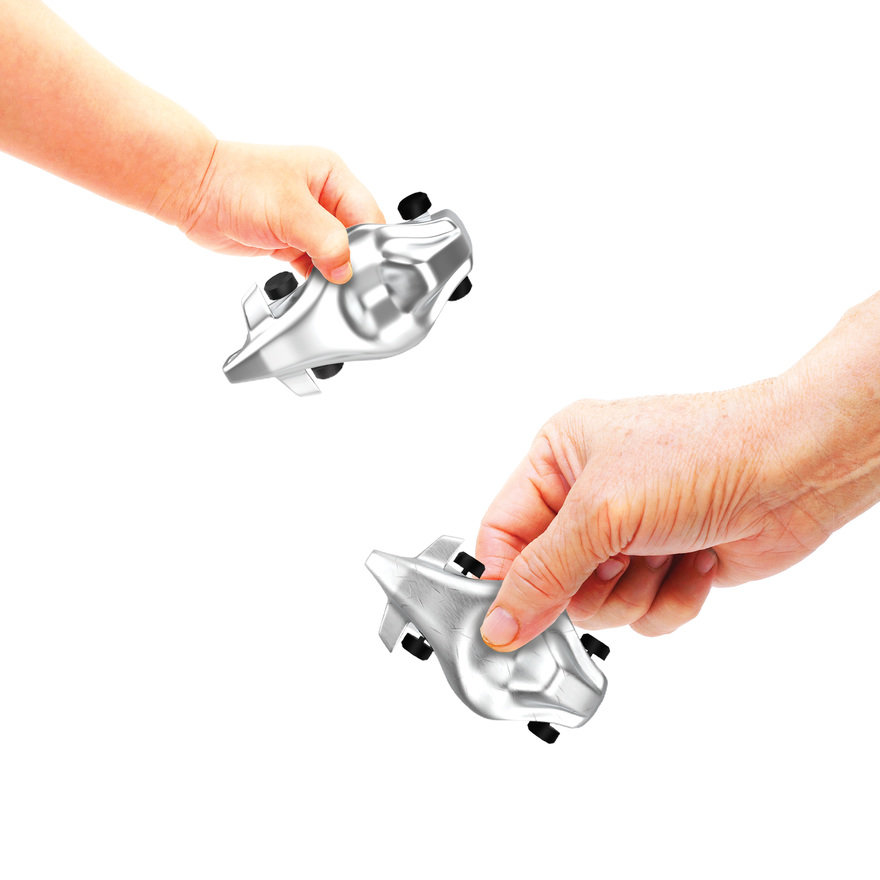 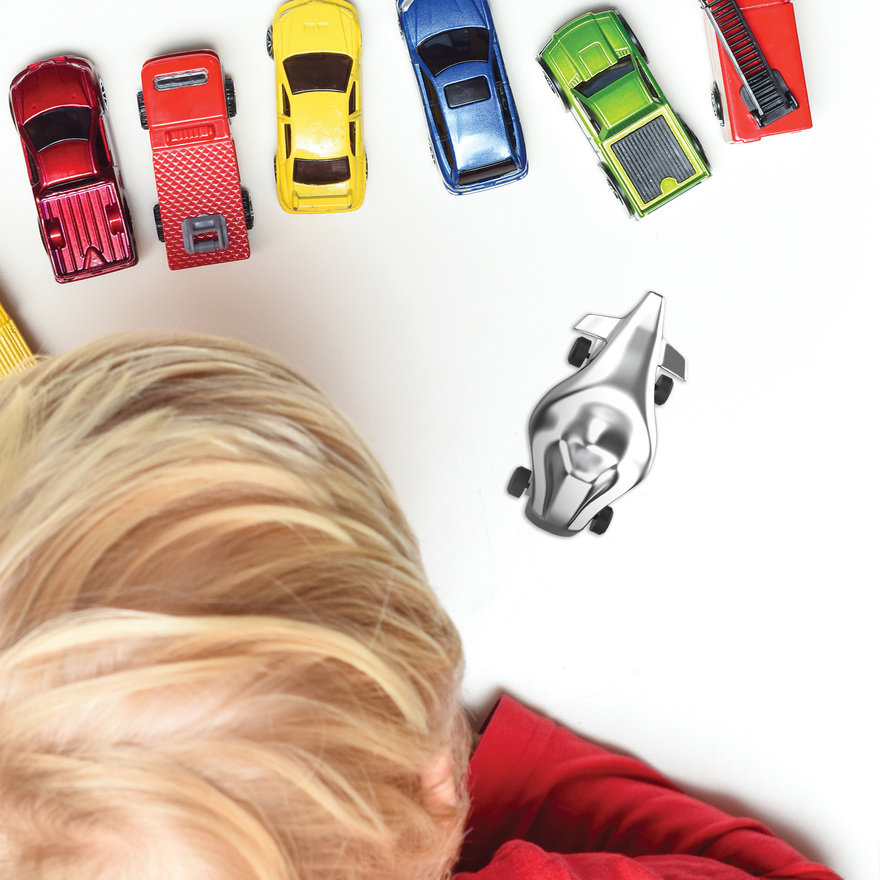 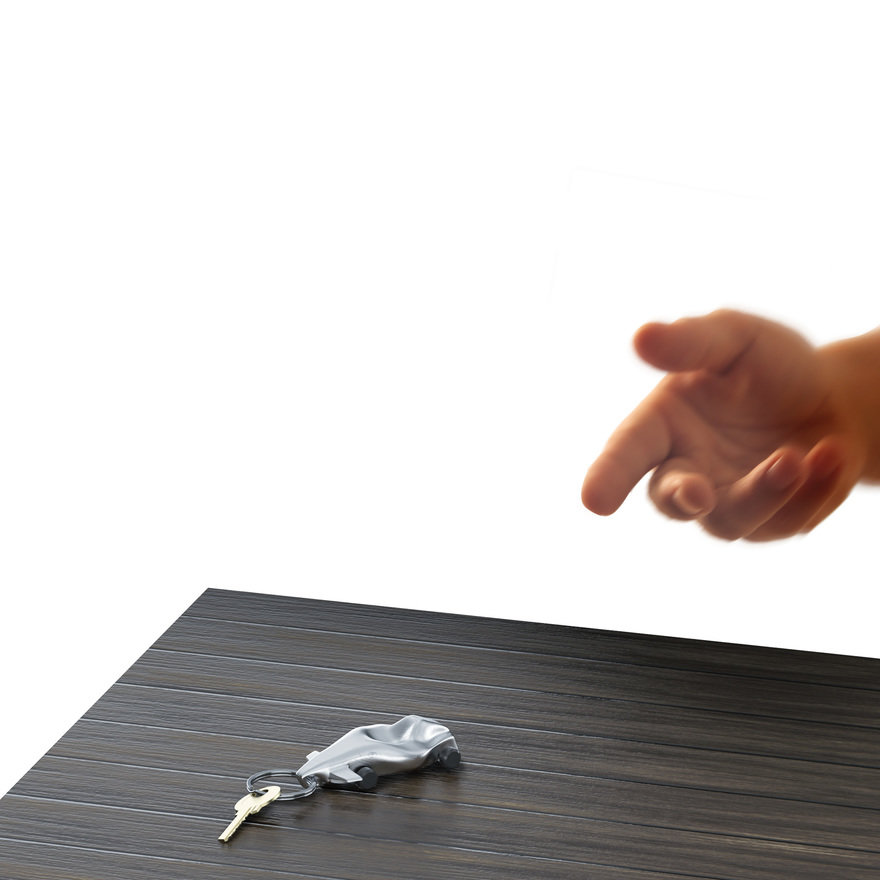 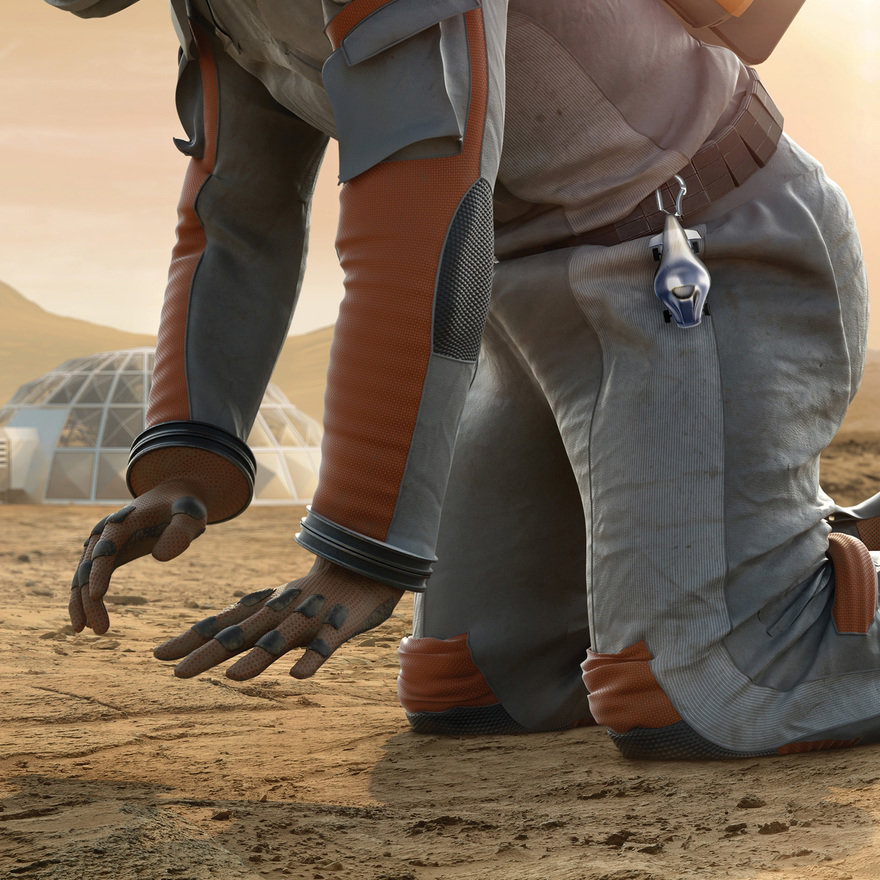 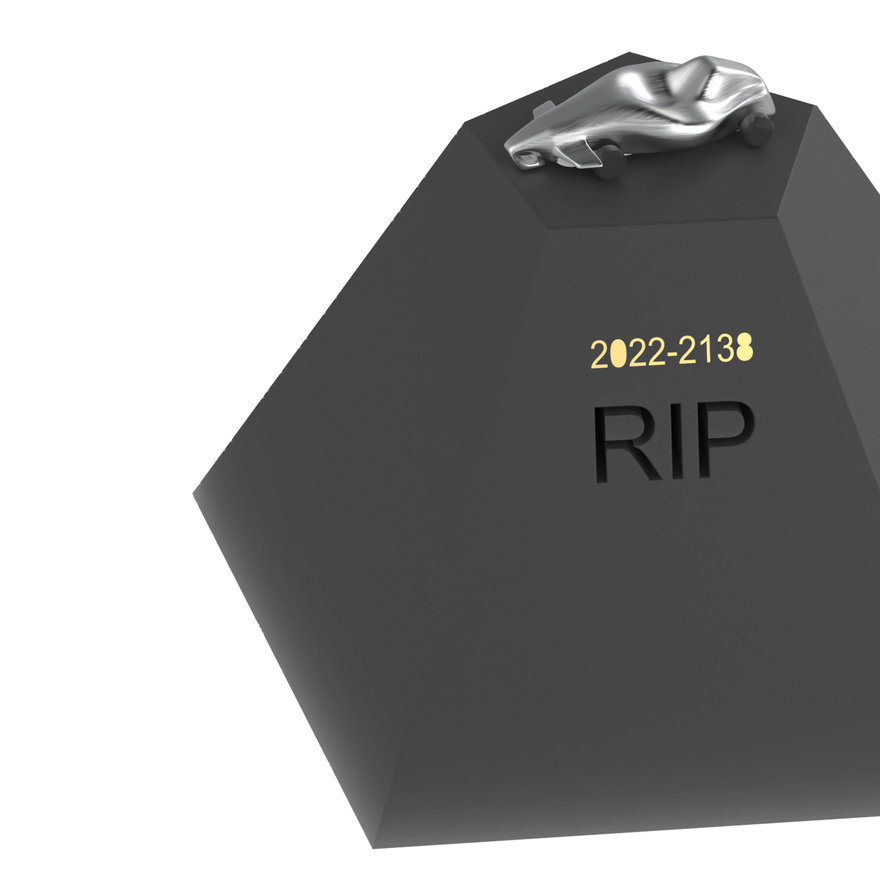 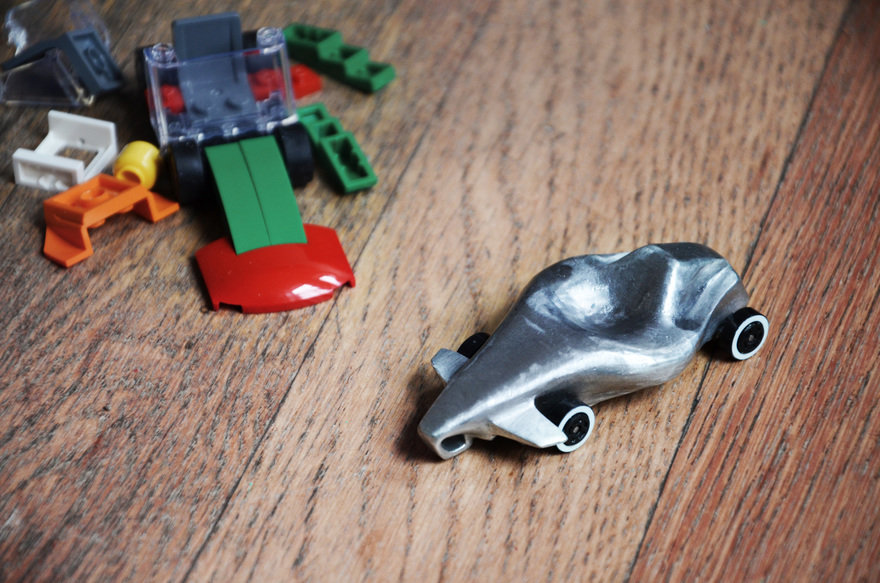 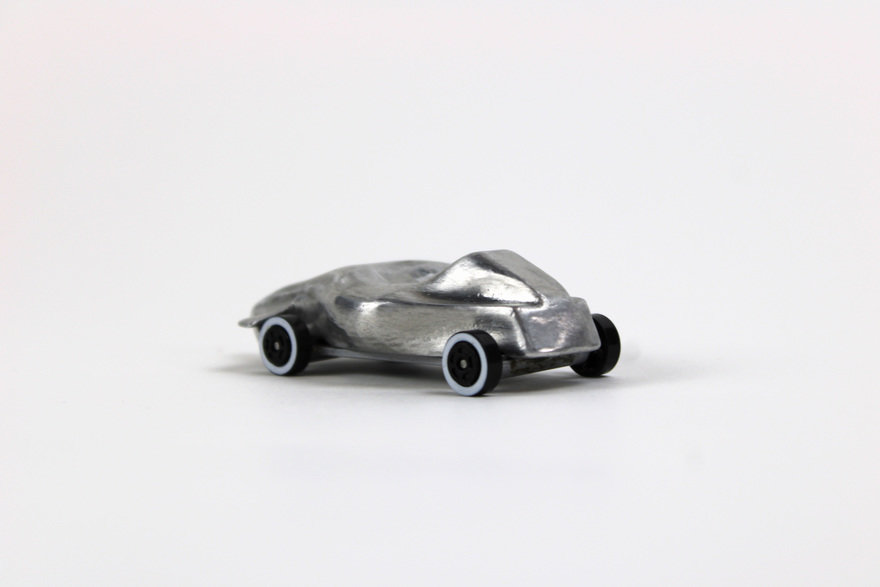 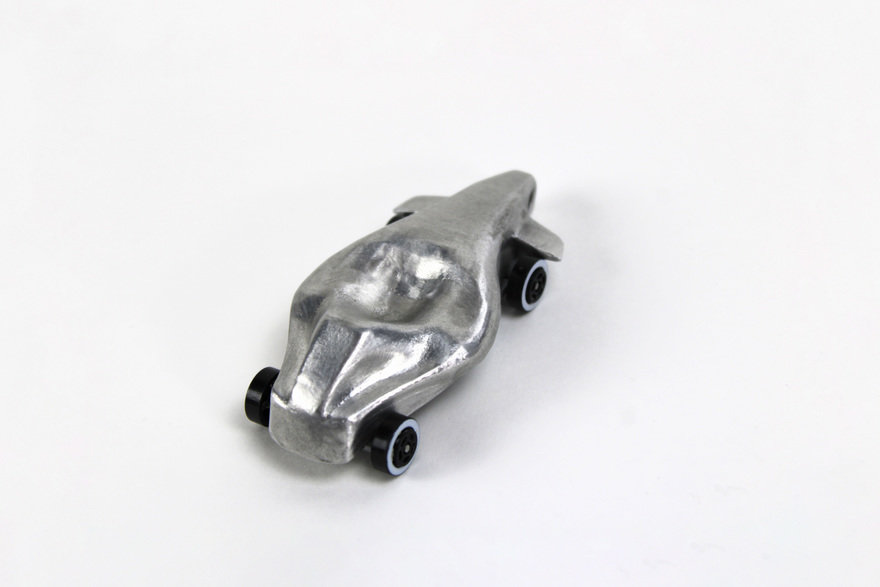 When you see a baby formula can and a Coca-cola bottle in a recycle trash can at the same time, they definitely hit you in a different way emotionally. I just can't view those formula cans simply as a kind of scrap metal yet to be recycled. So, I decided to make this Formula 1-year-old project function as a portable lifetime monument that can be carried around by the user.

Babies are simply the future of humankind. Newborn babies and those to be born will live in a world where technology both advances and shapes people's capacity exponentially. The design is a special reminder of the starting point and the meaning of life in a rapidly evolving world. Being able to stare at, hold and even play with a tangible proof of the very first period of your life actually existed, when you were not able to build a memory yet, can be definitely categorized as happiness. "A child does not leave his parents' arms until he is three." The Chinese sage Confucious also highlighted the same period of one's life in his quotes. The formula stage of one's life is also the period that parents unilaterally devote. When a son or daughter looks at the toy car, gratitude and appreciation probably will replace other negative feelings, hence improving the relationship between kids and parents. There's a hole at the tip of the formula 1-year-old car formed when the body is cast. It enables the toy car to function as a practical key chain when the toddler grows up into an adult.

When people are trying to recycle materials, they always try to maximize the reusable percentage. When people are designing toys, they always want the toys to be as playful as they can be. This Formula 1-year-old project is different. It tries to make a beyond-toy and recycle the material in an unexpected way. It seems like an obvious option to make products more sustainable by using cutting-edge sustainable technologies and materials. But this special toy car is built to be last. Using the metal upcycled from aluminum cans, this Formula 1-year-old can last for a lifetime and even generations.

The formula 1-year-old toy car keeps the most distinguished visual elements of a modern F1 race car and distills them into a minimalist design. This design is meant to last a lifetime and even generations where the "less is more" design philosophy can be applied. The body is cast into one-piece with a streamlined shape. Moreover, toy cars are traditionally viewed as a boys' toy. So, the design also simply uses the unpainted aluminum to communicate with the user to have a gender-less impression, which is a design language often used in electronics like laptops when the manufacturer wants both genders to buy their products.