Apollo is a self defense every-day-carry device & security ecosystem designed to ensure the safety of US college students and shorten Police response. Its inconspicuous design allows victims to maintain a good purchase on the device, without portraying themselves as a possible counter-threat to the aggressor, therefore preventing a dangerous situation from escalating.

In contrast with regular pepper spray or mace spray, Apollo offers state-of-the-art technology that brings a self defense product and IoT's together. The device incapacitates an attacker with gel-type pepper spray and temporarily blinds their eyes with two 700 lumen LED's. The bright lights also allow a camera to take a fast shutter-speed photo of the face of the attacker. This image is immediately sent to the user's phone, geo-tagged and sent to authorities; all in a matter of seconds while the victim makes a safe escape. Police now know who they're looking for and where. 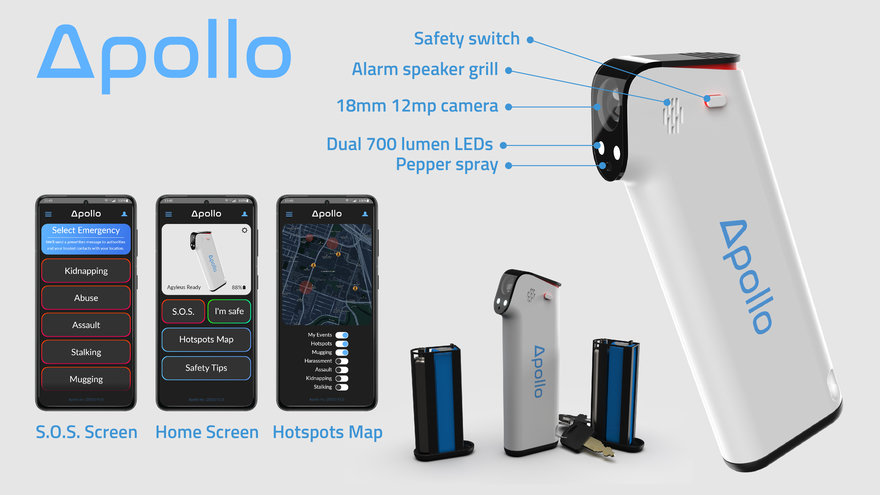 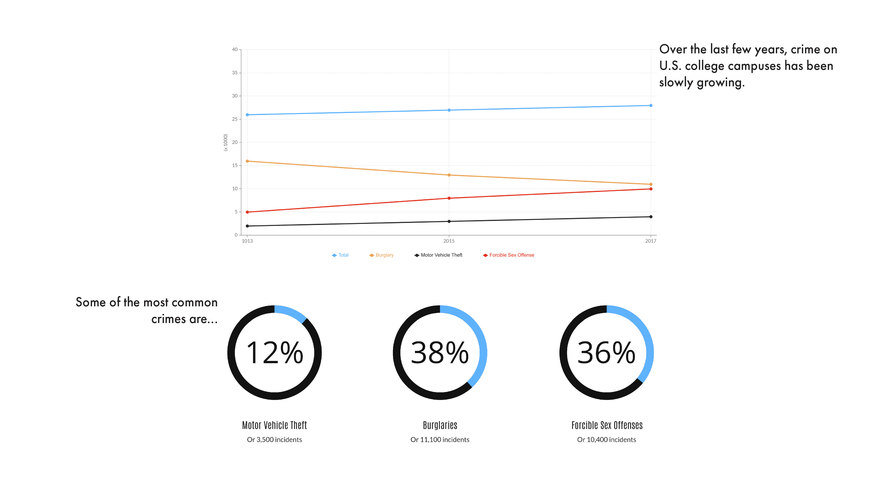 Research Statistics about crime rates in US college campuses. 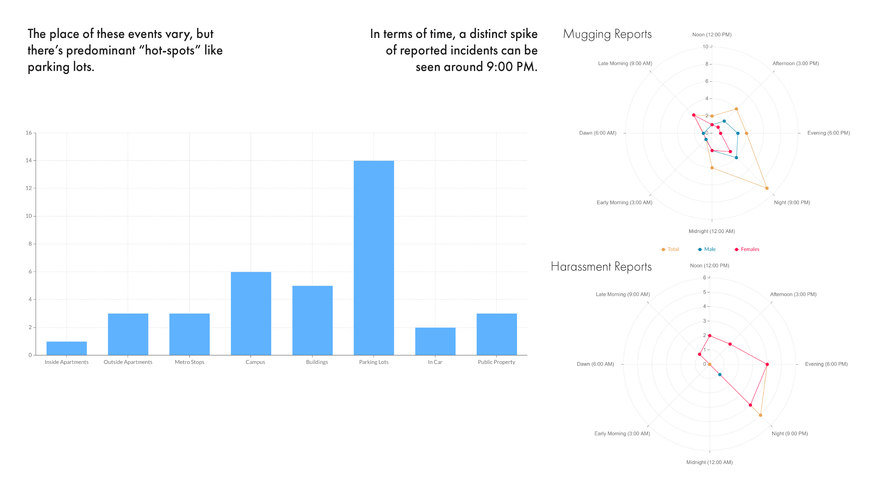 Research Statistics about time and place of attacks. 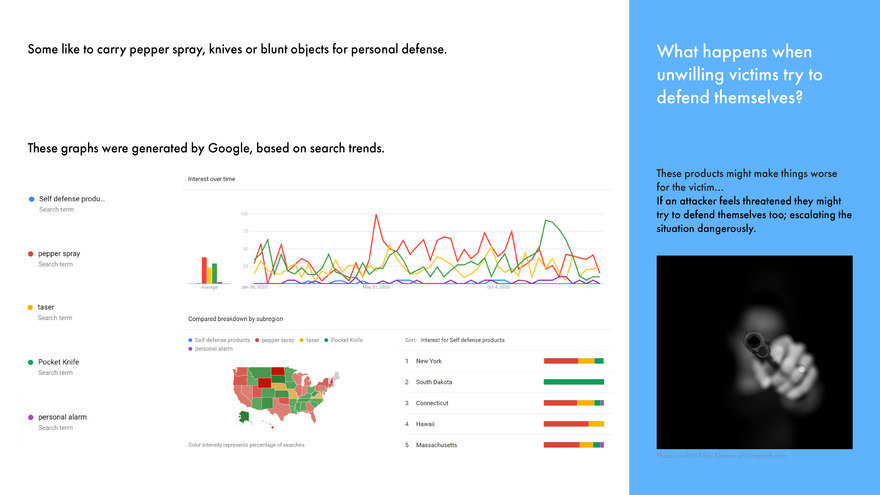 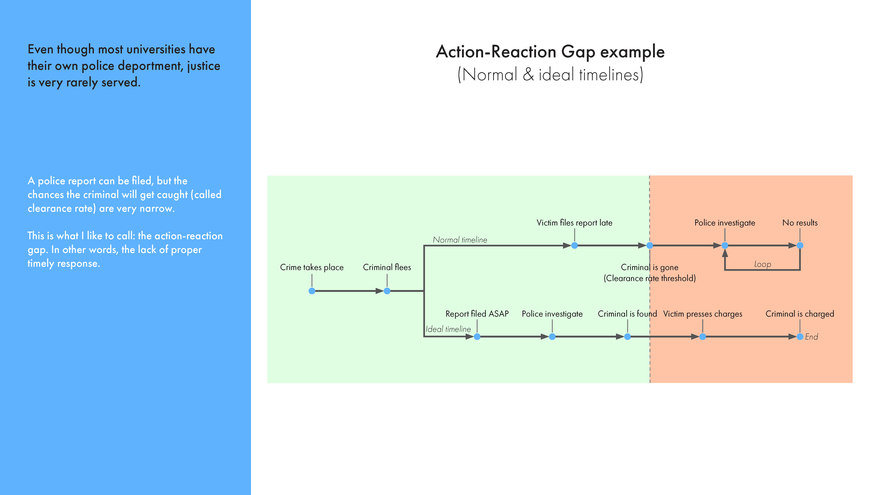 Problem - Clearance Rate The time between a crime and a criminal getting caught is crucial. Apollo aims to reduce this gap and allow authorities to find attackers faster. 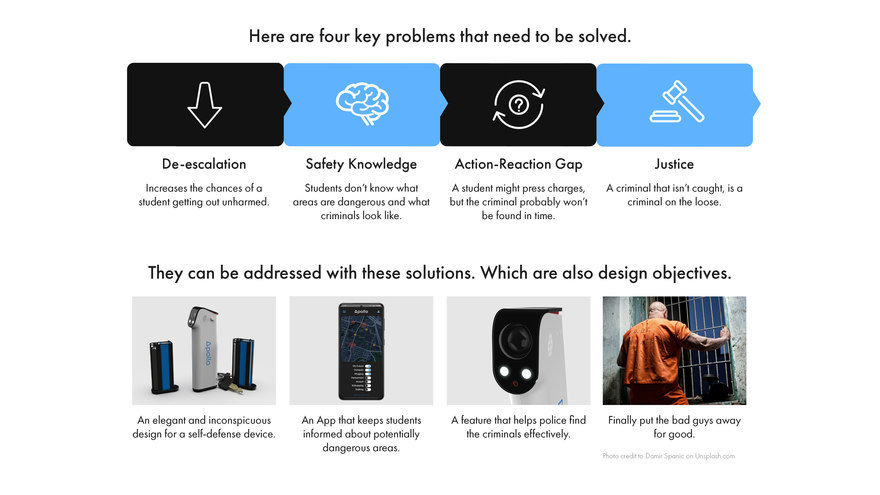 Design Problems & Solutions Criteria used to define the requirements of the design. 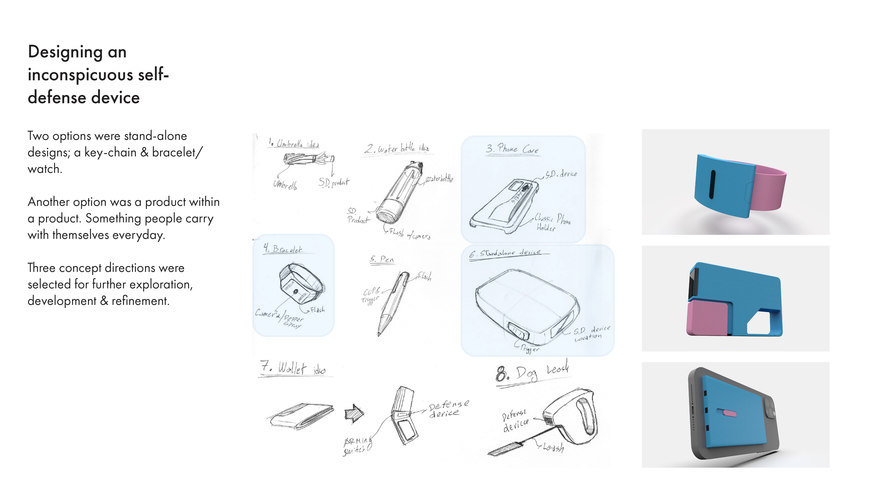 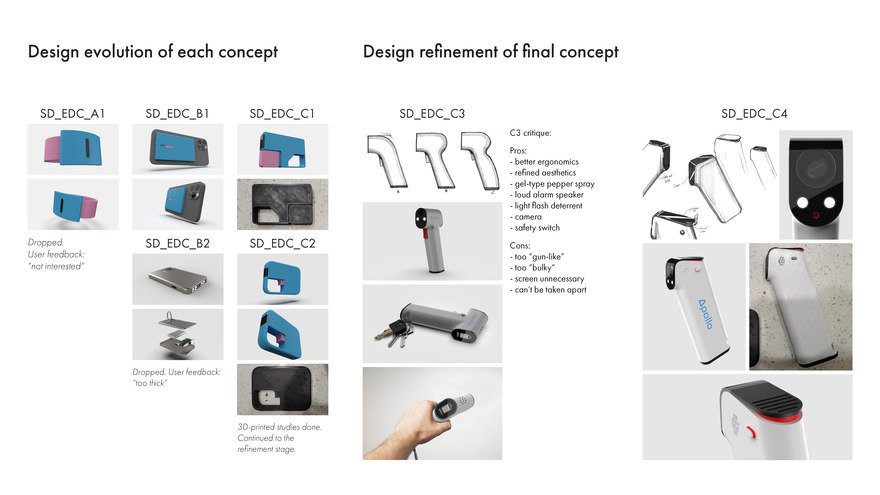 Design Process Exploration within CAD turns into refinement of form and rendered studies of CMF. 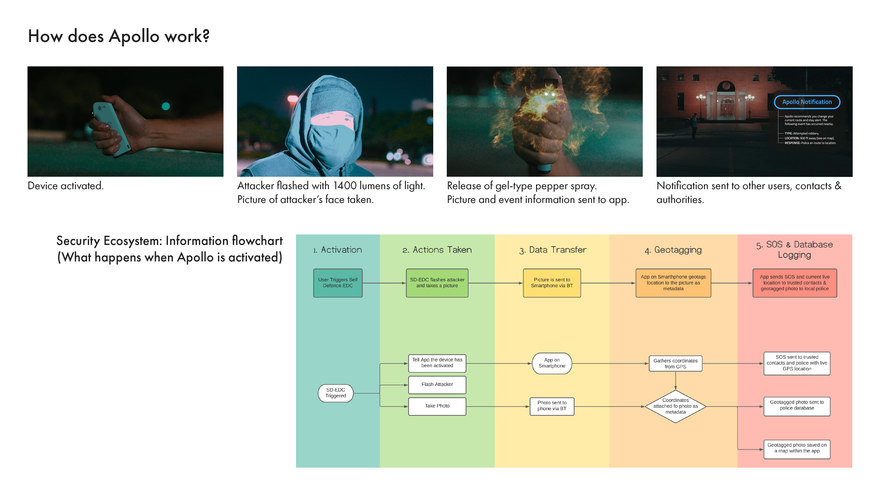 How does it work? Step-by-step process of how Apollo works, both physically and technologically. 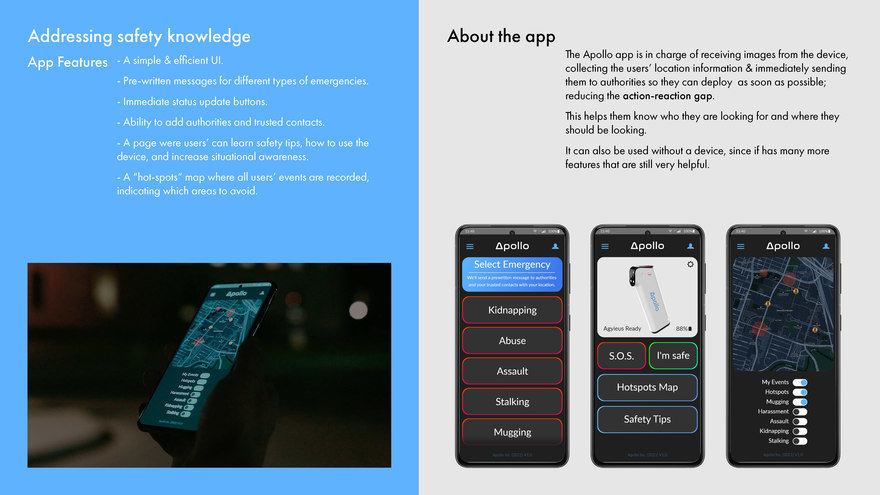 Software Aspect The integration of a physical product and an App is what makes Apollo stand out from other products in the market and creates a security ecosystem. 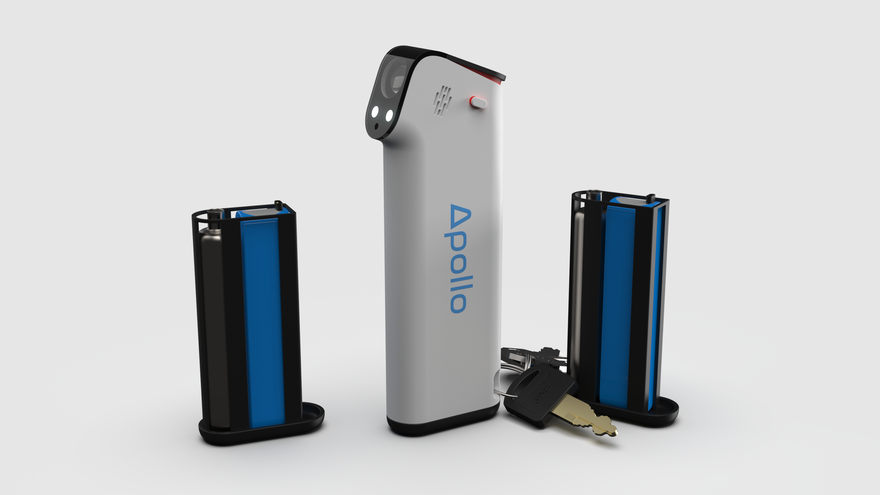 Reusability Apollo is meant to be an every-day-carry, or EDC for short. This dictates the size, shape and usability of the final product.
Made to last, Apollo offers swappable pepper spray cartridges and rechargable LiPo batteries. 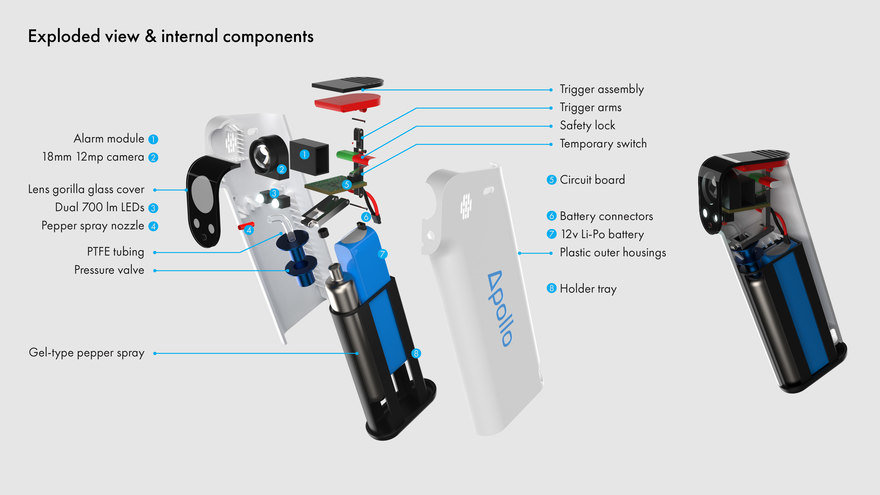 A Look Inside Exploded view of how the internal componets of Apollo interact with each other, all within a small volume.

Crime on US college campuses has been steadily growing since 2017. The main categories of crimes are motor vehicle thefts (~12%), burglaries (~38%) and forcible sex offenses (~36%). The time and place of these attacks vary depending on the layout of campus buildings, amount of foot/vehicle traffic and lighting quality amongst other factors. But common places are more prevalent such as near university buildings and parking lots, between the hours of 6:00 PM and midnight.

Psychology suggests that students who feel insecure have a greater chance of being chosen as victims since these types of crimes are opportunistic; wrong place, wrong time. This changes when a student is in possession of something they can use to defend themselves, which boosts their confidence. In the unfortunate scenario of a student being in possession of a self defense product that is easily identifiable by the aggressor, the latter might feel threatened by its own victim, which could make things worse. Apollo takes care of these two problems by looking unlike any self defense product.

In terms of clearance rates, Apollo could potentially close the gap between the time of the event taking place and police finding and charging a suspect from a few days to a few hours. This is possible by slowing down the attacker, allowing the victim to escape and providing authorities a significant advantage with information such as location, time, and identity/face of the attacker.

Within the Apollo app, Images of aggressors and frequency of events can be logged and compiled in a map. This gives students an upper hand in knowledge of possible dangerous areas or "hot spots" as well as the identity of aggressors they should stay away from if spotted again. In addition, carrying an Apollo device could boost the confidence of students, which would make them less likely to be targeted as a victim.

Ultimately, the security ecosystem would keep students and authorities so closely connected that a drop in criminal activity on a given college campus could be observed.

Self defense products and security apps are nothing new, but they seem to exist on two different worlds that rarely interact with each other. Apollo would be the first product of its kind to offer a combination of the fast spread of information present on software applications and the direct user-product relationship and synergy. This gives Apollo the potential of solving security and safety issues seemingly ever-present on US college campuses that other products or proposed solutions fall short on.

The appeal for such products not currently offered in the market can be huge, presenting an opportunity for Apollo to be not only popular, but also profitable.

While the scope of this project did not include an aspect to directly benefit society, it could do so indirectly. Although it was originally designed based on personal experiences and other student testimonies, Apollo has no real constraint limiting its use solely to US college campuses. After all, a campus is not so different from a small neighborhood. Socially, a reduction of crime rates in college campuses, communities and neighborhoods could be achieved.

Unlike humans, technology is not racist. So by providing and logging solid factual evidence against the identity of attackers as well as time and place of attacks, Apollo could make criminal charges due to discrimination a thing of the past. This would have a huge impact culturally, as this is still a very present issue in the US.

Environmentally, another plastic product has the danger of contributing to world pollution. But that can be changed by utilizing smart sustainable materials, designed for longevity and repeated use and easy to maintain; no planned obsolescence in mind.

The design language of the project is simple and minimalist, employing geometric forms to display elegance and steer far away from looking like a self defense product. The dimensions and angles were taken into consideration in accordance with human factors and basic ergonomics of hand grips and intuitiveness for activation actions.

Meant to be easily manufacturable in only a few injection molded and cast parts, different colors can be achieved to fit the preferences of users. CMF combinations were compared on digital renders, ultimately avoiding gloss for touch points/areas of the device.