Over the past 10 years, Beacon Communities (a multifamily housing development, investment and management company) has worked with the City of Boston and with the community to redevelop the neighborhood. As part of the first phase, the Tierney Learning Center (TLC) was built.

The TLC is a hub for youth and community growth and learning, bringing together organizations to offer programs that serve Old Colony's residents, including the Boys and Girls Clubs, ABCD Daycare, Doc Wayne (a non-profit reimagining therapy through the lens of sport), EMPath (Economic Mobility Pathways, a program focused on transforming people's lives by helping them move out of poverty), and more.

While partners provide strong and engaging programming for little kids through pre-teens, TLC found a need to expand its programming for the teenagers who age out, and it enlisted the help of Agncy to make that happen. TLC leadership was humble and brave in their approach; they agreed with our assertion that teens should not only be the "target audience," they should be the designers of this new programming.

After identifying and recruiting the help of interested and enthusiastic individuals to form a teen design team, Agncy was able to stand back and relinquish power over the process, asking the team to deliver a set of recommendations that leadership could then fundraise around.

The team came together (guided by Agncy) in all the ways a professional design team would to create a trusting, creative environment where people can be vulnerable to have new ideas and lean on teammates to make their ideas stronger.

The team's first task was to learn about each phase of the design process—research, reflection, ideation and refinement. Then, it was time to put theory into practice.

The design team investigated how TLC teens (including their peers) defined success and identified pathways to success, ultimately developing four programming paths, each speaking to something different that teens said were important to their unique ability to drive success:

- Professional learning allows teens to explore a range of careers around Boston, offering exposure to different companies and industries

- Mentorship from other people in their communities allows teens to see "the me I wanna be."

"After the first couple meetings, there was this kind of buzz around the project; people were talking about it and were excited to hear about what the teens were doing." 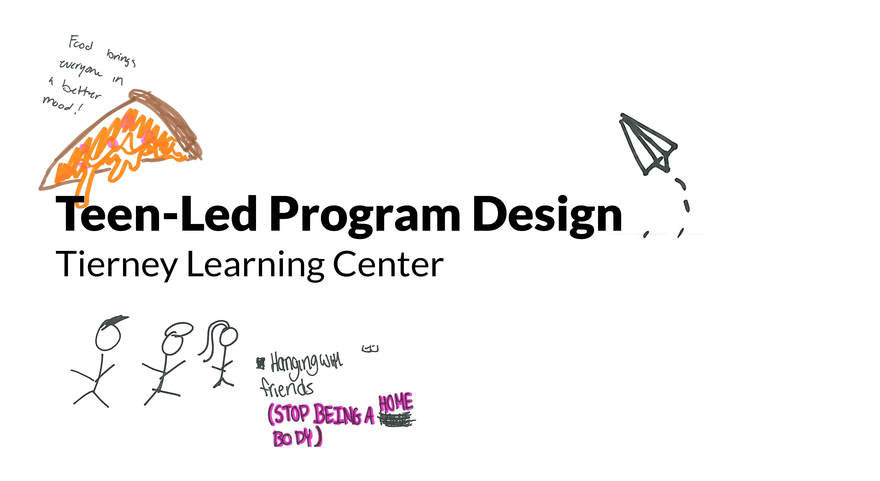 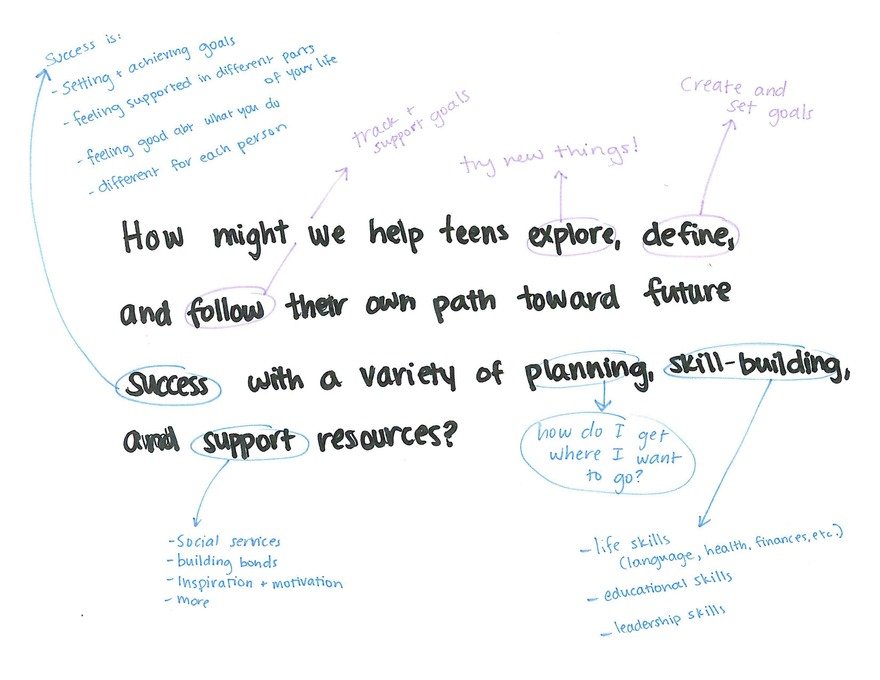 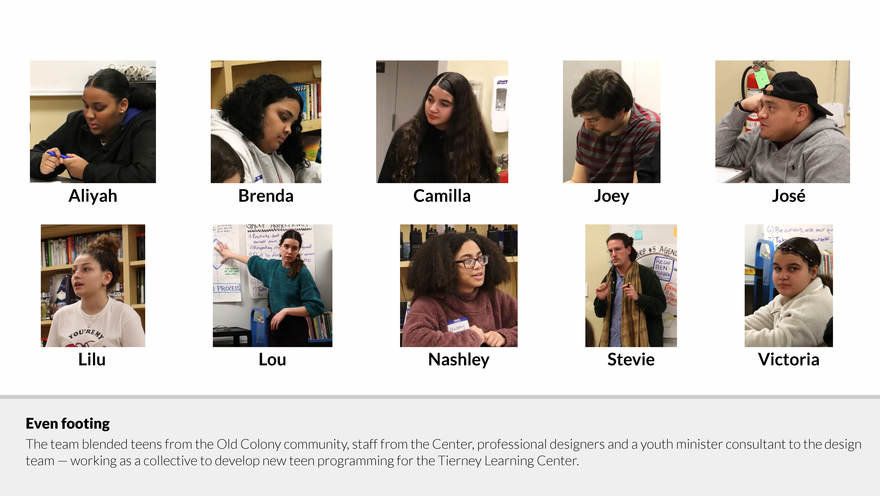 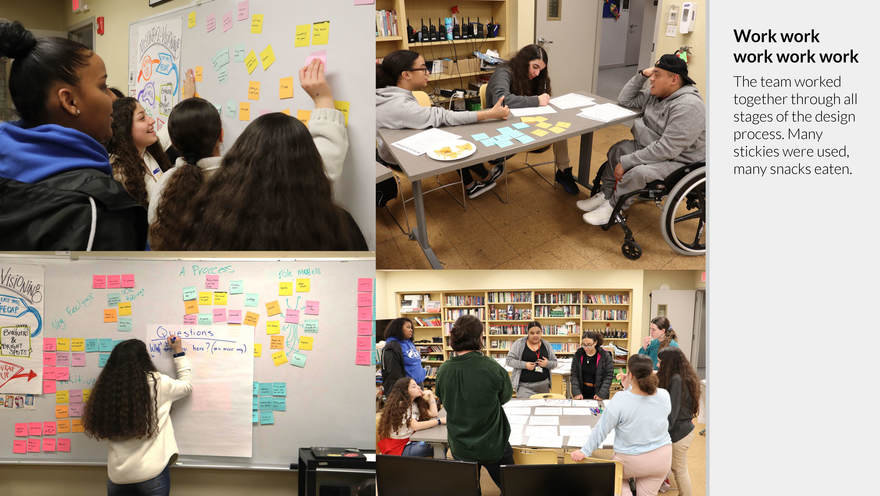 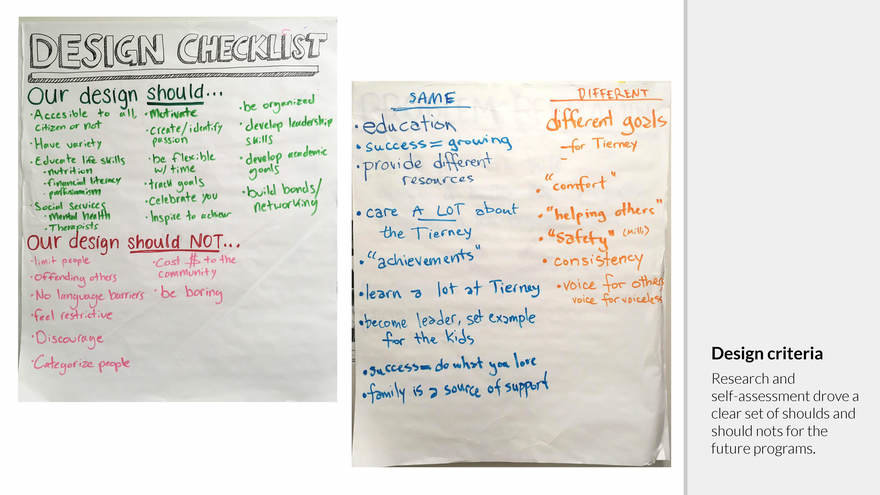 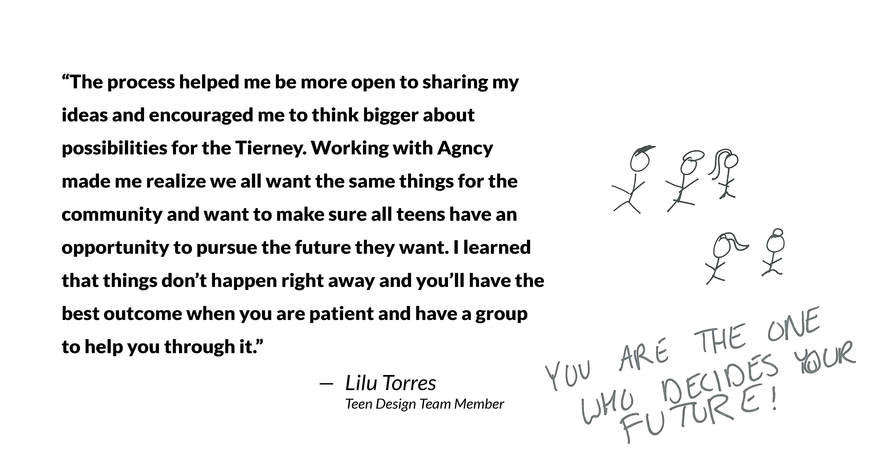 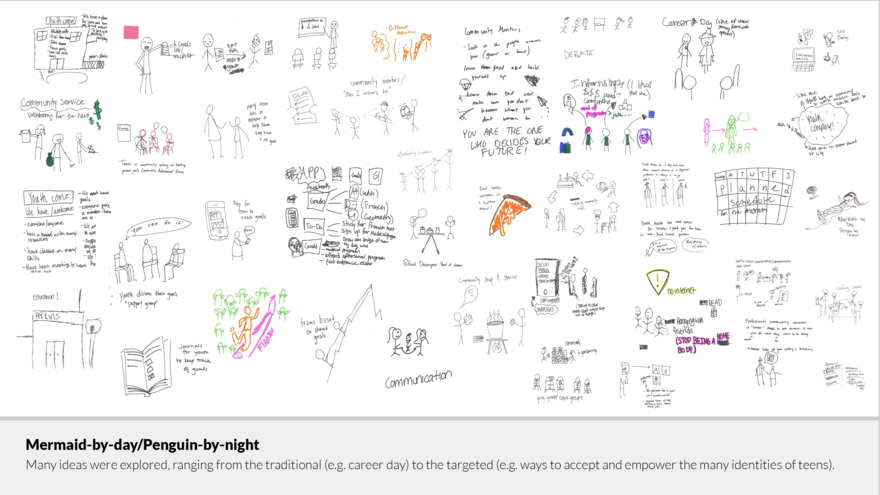 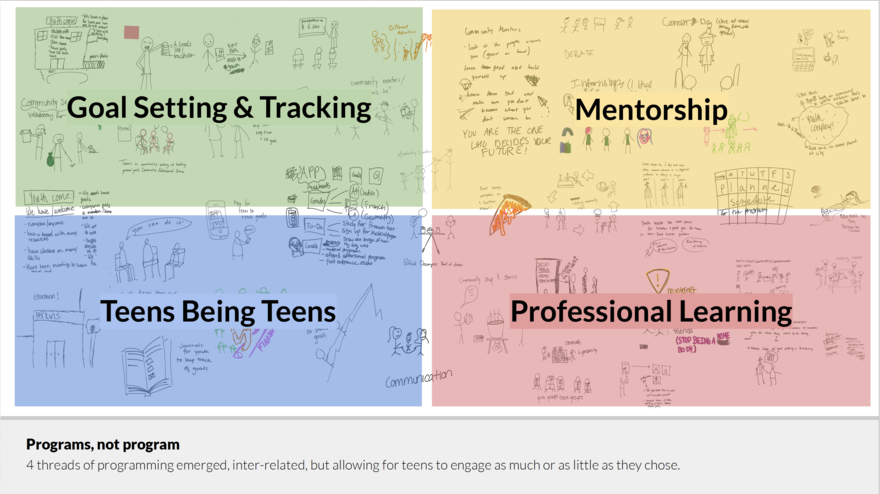 The Tierney Learning Center (TLC) partners with many organizations to offer programs that help meet the needs of Old Colony Housing Project residents. However, it wanted to identify a program to serve teens. While there are a handful of teens who grew up participating in TLC's after-school and summer programs and remain connected to the center, many teens today are disengaged from the community.

TLC leadership recognized that a plug-and-play approach wasn't likely to be successful. So it decided to partner with Agncy to shape a teen-led design process, allowing adults to take a step back and give teens a chance to own the process and determine the results.

We assembled a design team composed of recent grads who were able to connect with teens as both professional designers and as fellow young people. Agncy also engaged a local youth minister, who helped the team think about how to build real trust, empower teen voices and be considerate of power dynamics in youth/adult spaces.

As the team started designing the process, Agncy considered details that could drive experiential goals. For example, each session was run as a circle, creating an equitable positioning of participants; and facilitation materials were presented loosely drawn on chart paper, so people felt like they could influence the content.

With a safe space established and relationships developing, the team jumped into a design process with the ultimate goal of addressing the following question:

"How might we use design to come up with ideas for new teen programming at the Tierney Learning Center that brings in less-engaged teens and helps teens achieve success?"

Unlike typical design researchers who seek to get outside their own perspectives to understand the needs of users, in this case, the teens themselves are potential users of the programming.

The teen design team began by examining their own experiences and mining their personal stories for potential areas of interest and issues to be explored. This process included some simple tools like mind mapping that encouraged teens to write down and draw connections between words related to their own perceptions of success.

We were impressed by how ambitious the teens revealed themselves to be as they explored their definitions of success, as well as their holistic view of what it takes to achieve these things:

- Being successful often means working hard, completing school, meeting a goal, and having money; success is getting where you want to be in life

- Teens lean on other people, like family and mentors, to be supported and get wisdom

- Overthinking, negative thoughts, and negative people sometimes get in the way of success

The team dove further into the idea of success by sorting their thoughts into key themes of "barriers and bright spots," focused on emotions (positive and negative), a process, and role models.

Then, the design team took a step back and used those themes to identify which stakeholders would be most helpful/important to interview (e.g. young people, TLC employees, partners, etc.) and created interview questions.

From interviews with TLC staff, Beacon Communities staff, and other teens from Old Colony, the teen design team learned about stakeholders' goals and how those goals help them become better, more successful people. The teens were particularly interested in learning what success meant to stakeholders personally— their answers demonstrated a generous spirit and included, "helping the community" and "giving extra help to co-workers."

Originally, TLC leadership framed success through a lens of deficits— for example, teens need to learn new skills and overcome barriers to accessing resources. After conducting interviews and gathering information, the teen design team reframed the meaning of success, authoring the following statement:

"The process is different to each person, ultimately revolving around setting and achieving goals, feeling good about what you do, and feeling supported in different parts of your life."

They also revisited the original question ("How might we use design to come up with ideas for new teen programming at TLC that brings in less-engaged teens and helps teens achieve success?") and, after reviewing many potential "how might we" statements, rewrote their mission statement to read as follows:

"How might we help teens explore, define, and follow their own path toward future success with a variety of planning, skill-building, and support resources?"

An expansive, generative brainstorming sprint lead to upwards of 60 ideas from the teen team (ranging from mermaid-by-day/dolphin-by-nightTM, a way to support teen's multiple selves, to shutting off the internet so teens are forced to put their phones aside).

Synthesis of these ideas revealed there is no "one-size-fits-all" answer to engaging teens. The answer wasn't A program; the answer was a series of programming threads that knit together to support teens across the four identified areas with different offerings across days and weeks.

By serving up a range of programs, Tierney has the opportunity to engage a range of teens. The team reviewed ideas against the design checklist it developed out of its research, defining key design criteria. For example: programs should be accessible and offer variety; programs should not feel restrictive or be boring!

For each of its four themes, the teen design team imagined how to bring programs to life taking into account available resources. They mined the assets of TLC, Old Colony and the community to come at program development from a position of plenty rather than a mindset of need.

They used this asset inventory to imagine what jobs might need to be done to bring programs to life and how these could be met within their community.

Teens want support in reaching their individual goals. The teen design team imagined a program specifically focused on teens supporting each other in defining, planning, refining, checking in on, and celebrating progress toward their goals, using a multi-week framework that the group designed together.

Building positive, supportive relationships with older youth and adult role models in their own community emerged as a powerful tool for helping teens see who they may seek to become. The team conceptualized a program to recruit mentors in Old Colony, train them, and partner them with mentees with shared experiences to foster lasting relationships.

Teens need a place to safely connect with their peers and be themselves. It helps them feel supported and helps them learn social skills essential to future success. The design team proposed creating dedicated times for teens to be off their cell phones and to have discussions about flexible topics without a strict schedule or specific tasks to be accomplished.

During research, a real want for learning about different professions and professional skills came forward. There was also a desire for a variety of activities, instead of doing the same thing at every meeting. The team proposed a program that would meet once a week and bring in professionals from across Boston's varied industries to share their experiences or teach new, hands-on skills.

The teens and Agncy developed the final presentation deck and presented it side-by-side to the TLC leadership team, fielding questions about execution and selling the value of the program concepts. The Agncy team followed up with a more detailed implementation plan.

TLC leadership is in the process of pursuing funding. They see this as a model they can and will roll out to other Beacon Communities in the near future.

"At the beginning of this whole project, I really didn't know what to expect. I was worried the teens were just going to say, 'let's get a ping pong table,' and leave it at that. But I was really impressed by the work they did, and the ideas that came out of it. They were all really thoughtful and you could tell how much hard work had gone into thinking about what it means to be successful. The teens came out of this project not only having done great work, but ready for the next steps of really bringing those ideas to life at the Tierney. We have some really concrete next steps for starting to execute their ideas right away."

"The process helped me be more open to sharing my ideas and encouraged me to think bigger ...working with Agncy made me realize we all want the same things for the community and want to make sure all teens have an opportunity to pursue the future they want."

"The steps we took to brainstorm and develop ideas for programs made a difference. I want these programs to help youth be more open and trusting with community leaders and also foster participation in programs that help them and the community grow."

"Agncy encouraged us to think about more ways to provide for the growing community around it. The process of working with Agncy has taught me that change doesn't happen immediately. It takes a group of people who are open-minded and hold experience."