Traveling with a guitar, particularly on an airplane, can be challenging. Delicate guitars typically need to be checked in the baggage hold, leaving them vulnerable to damage. Prior attempts at travel guitars have still been too large to carry on a plane but smaller than a typical electric guitar, making them undesirable to play at gigs.

The Ascender is the first gig-ready, pro-player travel guitar. A concealed lever, when released, automatically loosens [JS1] the strings and unlocks a hinge at the neck, allowing the guitar to bend completely backwards as the strings follow the fold under light tension. The Ascender fits in a backpack that can slide under an airplane seat for easy travel. When you release the concealed lever, the string tension drops from 118 pounds down to just 3 pounds, which we've exhaustively tested to be just enough to rest the strings within the V-grooves as the neck folds without damaging the strings. In addition to medical device-level engineering, The Ascender was developed with noted luthier Joe Glaser of Nashville, Tennessee to ensure it delivers a professional-level playing experience for users.

With The Ascender, musicians don't need to worry about overhead bins, checked bag fees, or having their guitar returned damaged. The TSA compliant Ascender converts to the smallest travel size on the market. And it's easy to unfold the neck, quickly top-off tune the strings, and start rocking. 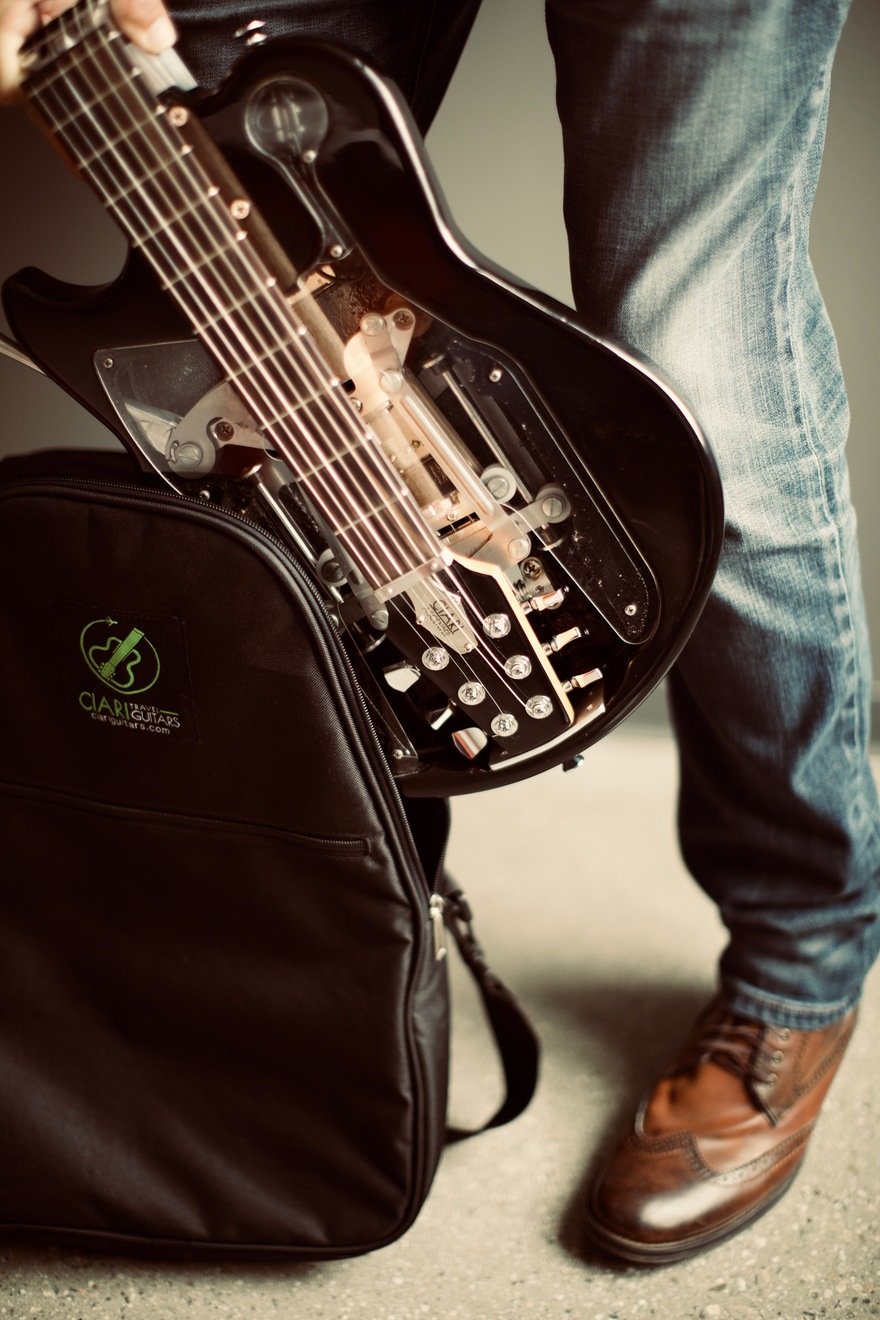 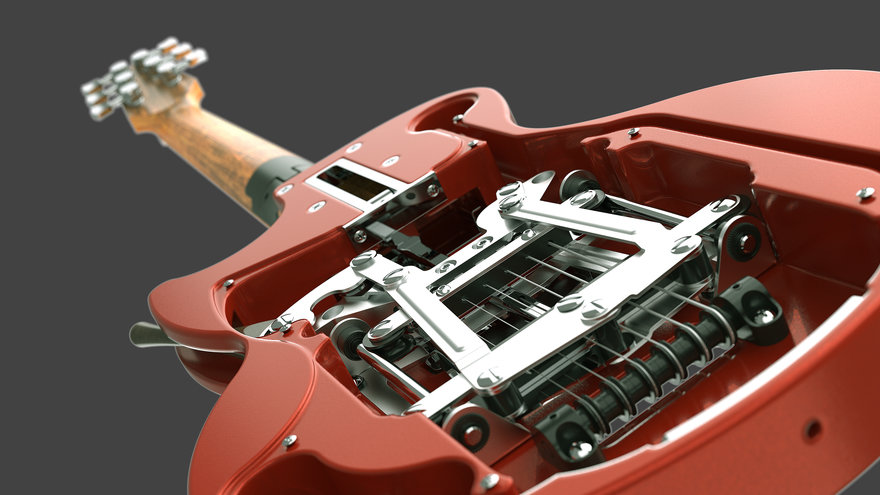 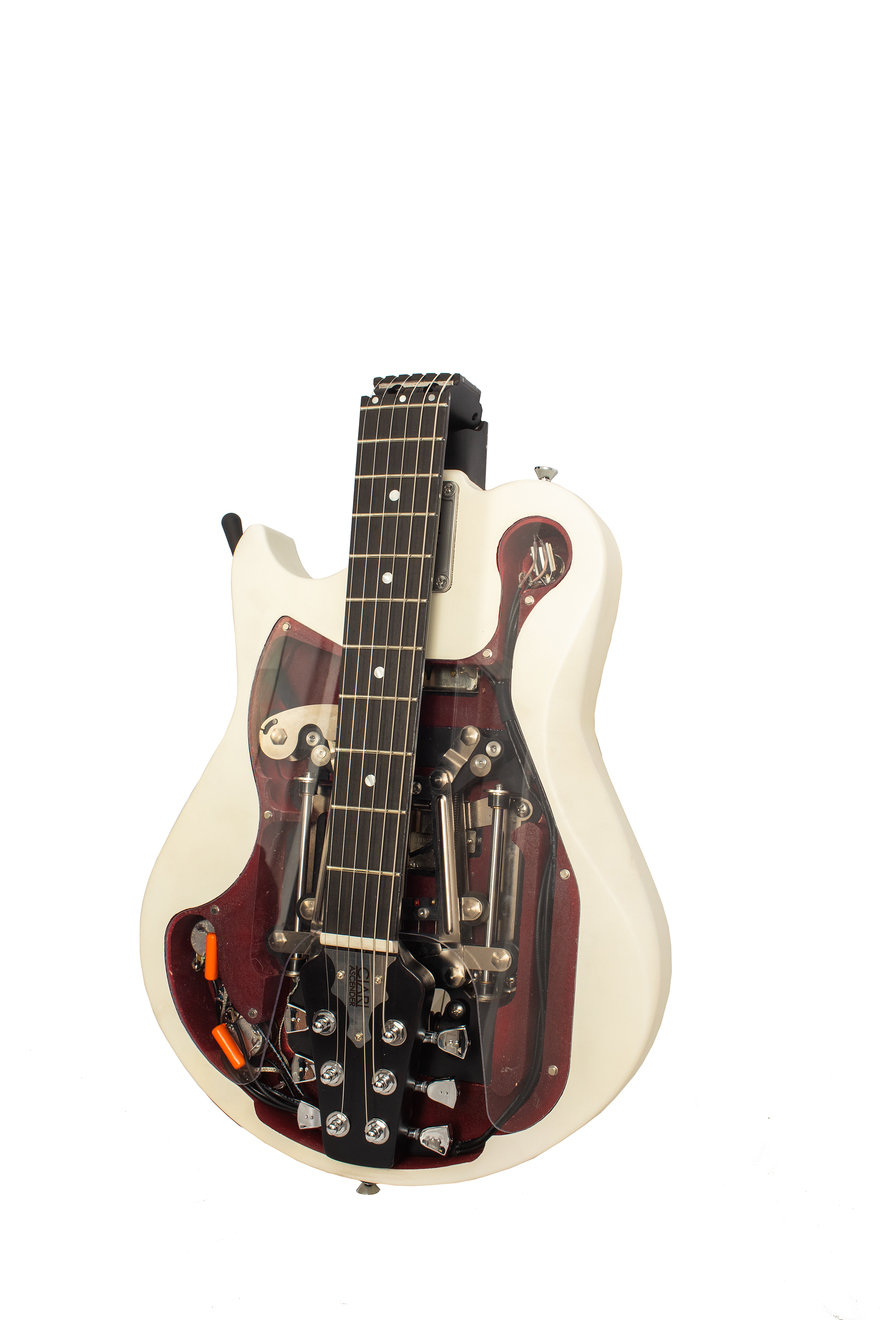 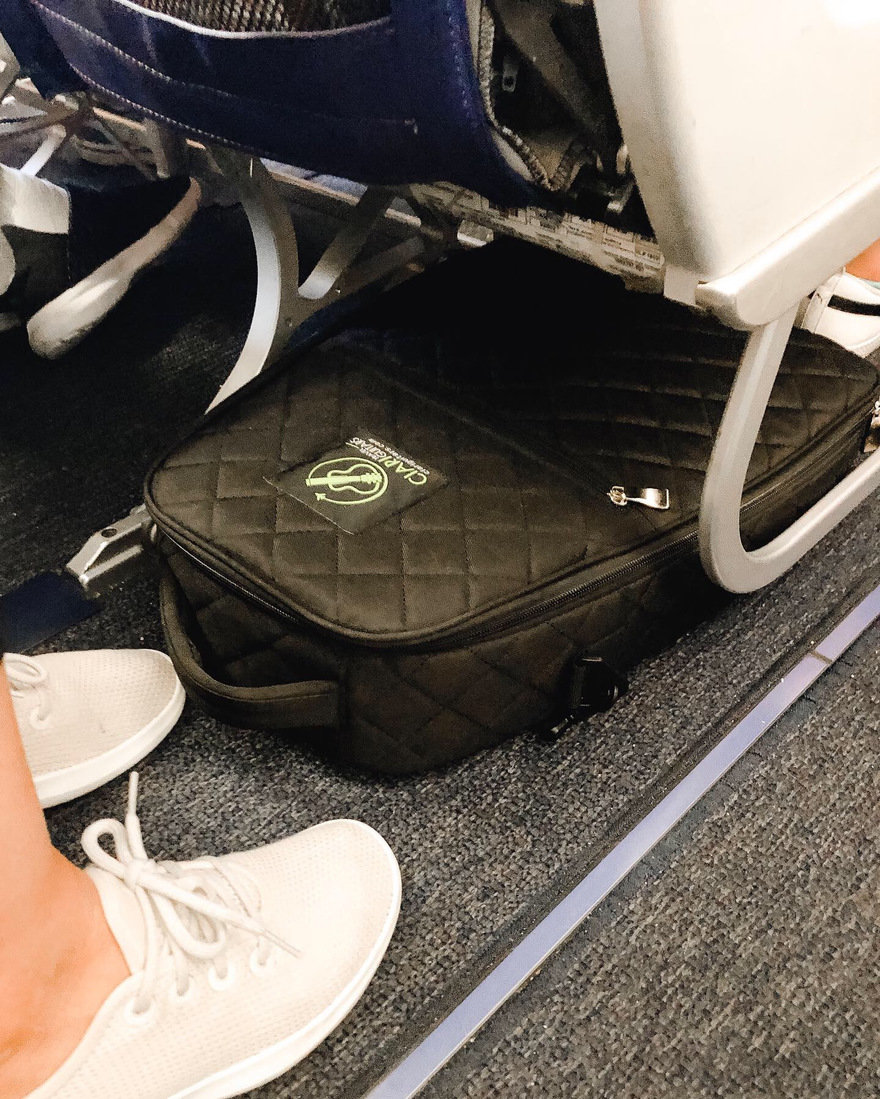 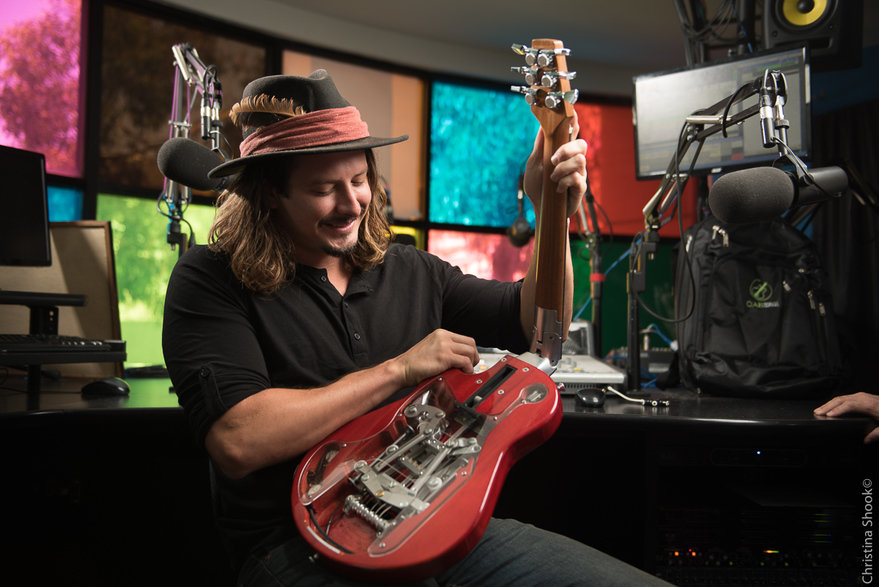 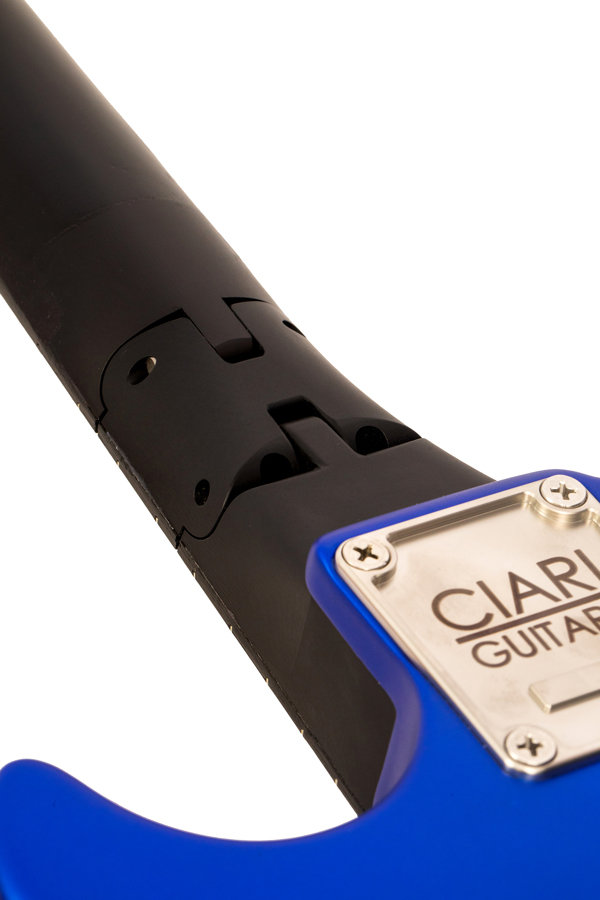 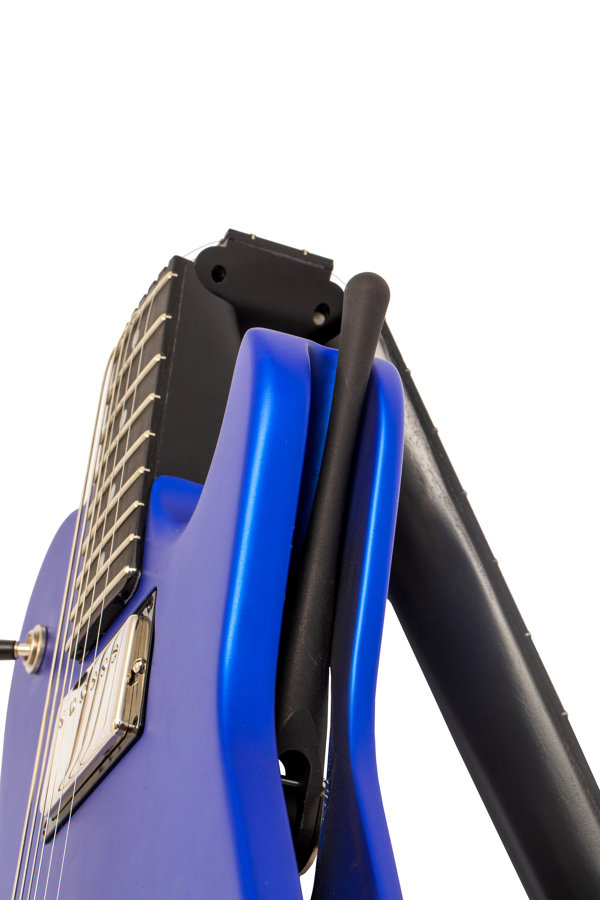 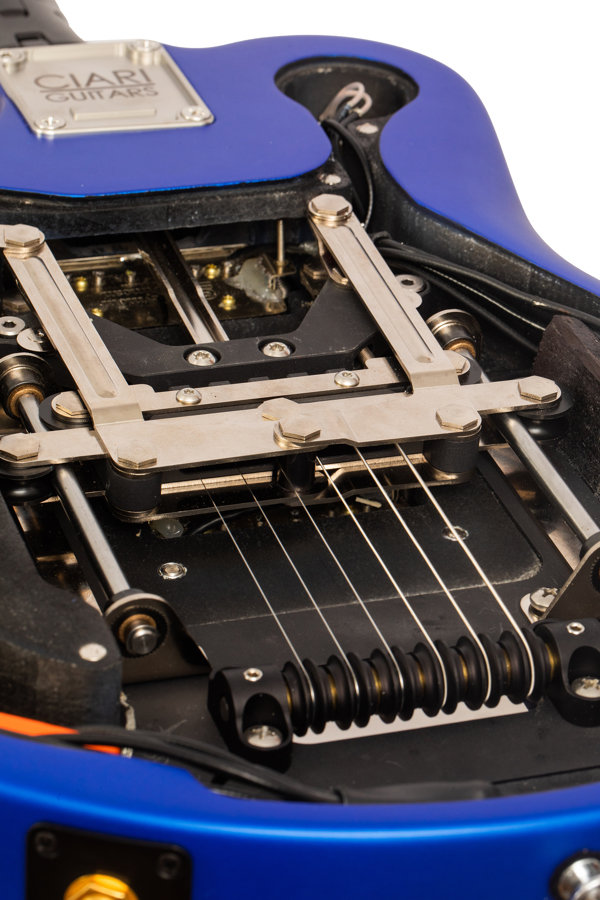 Life on the road is all glamour, right? Well, for those rock gods who don't have roadies and "people," traveling with a guitar is a serious pain. First, the case is an awkward size, always fun when you're balancing other luggage. And you have to check it, which means trusting your precious cargo to unseen hands that likely don't value your axe as much as you do.

Entrepreneur Jonathan Spangler saw the potential for a new travel guitar – one compact enough to fit in a backpack for easy transportation (especially in an airplane), yet professional-level in its look, feel, and sound. There are several travel guitars on the market, but they are still too long to fit in a carry-on bag, don't look, feel or play like a normal guitar, and taking them out of "travel mode" often means messing with the strings and/or a serious retuning.

Delve worked with Spangler and his music-tech start-up, Ciari Guitars, to clearly define the requirements. It had to:

· Be lightweight (less than 7.5 pounds) and fit in a normal backpack

· Have just one action to fold the guitar

· Be easy to string or restring

The solution? A neck that hinges in the middle, so it folds exactly in half and backwards, keeping the strings under light tension the whole time. This architecture required a complex over-center, spring-loaded mechanism to allow the strings to move as the neck folded and to lock the neck in place.

· Design a mechanism that fits in the space and provides an ergonomic user interface for locking and unlocking the guitar. We created a kinematic model of the proposed over-center mechanism to estimate the forces the user would encounter.

· Determine how to correctly design and tolerance the hinges so the guitar played and sounded great. We created a CAD model of the ideal fret board profile that would provide the "action" required on the strings.

· Balance friction and spring force to maintain tension on the strings during transformation while stressing the strings as little as possible to avoid kinking.

We worked with a luthier (professional guitar maker) to help us work on the details from spec, size, look, and feel – everything related to the fine art of instrument making. We built test fixtures and ran life cycle testing of the mechanism and tuning checks to see how the strings would hold up to repeated folding and tuning.

With the throw of a lever, the patented folding system loosens the strings to 3 pounds of tension, unlocks the hinge, and enables folding. The strings "follow the fold" for elegant management. When unfolded, the strings revert to the fully tensioned state of approximately 118 pounds, needing only a modest top-off tune.

Finally, we turned our attention to the tactile experience of the throw lever. Early prototypes felt "grindy" and didn't have the definitive catch when locking or unlocking the guitar. We worked to eliminate friction points in the mechanism and changed the linkage design to make the lever click firmly into place.

The folding mechanism turned into a work of art. The team decided to put a clear back on the guitar to show it off. But the greatest overall service we provided to Ciari Guitars was extending their team to fill gaps in expertise. That allowed Spangler to focus on fundraising, marketing, and business creation while we focused on taking his product idea and making it into a real (and really desirable) guitar.

This hard work has paid off for Ciari Guitars. After working with Delve, The Ascender has taken the industry by storm. It has been featured in major media outlets such as USA Today, CNN, Forbes, as well as guitar-focused media such as Guitar World, Premier Guitar, and others. The highest honor came from Guitar Player Magazine, the most trusted voice in guitars, which awarded Ciari Guitars the coveted "Editor's Pick" and lauded The Ascender as the first professional- grade travel guitar in Nov 2019.